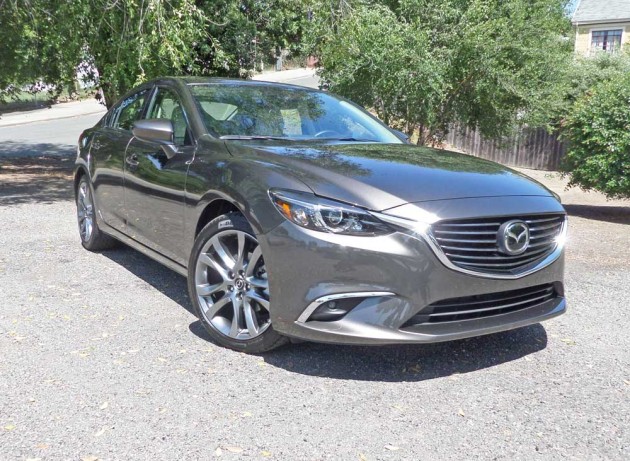 The 2016 Mazda6i Grand Touring sedan represents the core of the sedan market due to its just right packaging and comfortable seating for five passengers ? it?s not too small and it?s not too big either ? it is more practical than a sports car but not overly bulky, especially when compared to large SUVs. Other factors to consider is that pricing is within the financial reach of the majority of value-minded consumers means and the fuel economy ratings fall within an environmentally sound range. The 2016 Mazda6i has something else going for it ? it tends to stir up one?s emotions and rises above the mostly boring, vanilla flavor of the majority of its competitors. 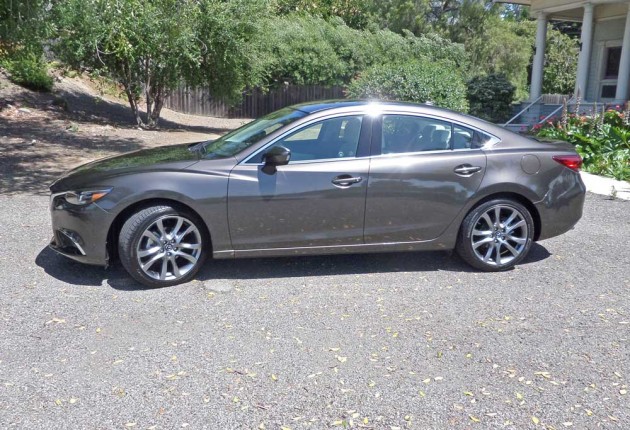 The full suite of SKYACTIV technologies was featured in the 2014 Mazda6i (it was the second production vehicle to feature the advanced technologies). It was the third generation Mazda6i sedan and showcased more innovative technology from Mazda?s engineers. Features such as i-ELOOP, which was the world?s first capacitor-based brake energy regeneration system to power all the vehicle?s electrical systems, along with the SKYACTIV-D 2.2-liter clean diesel engine and the front collision-detecting Smart City Brake Support system make their first appearance in North America. 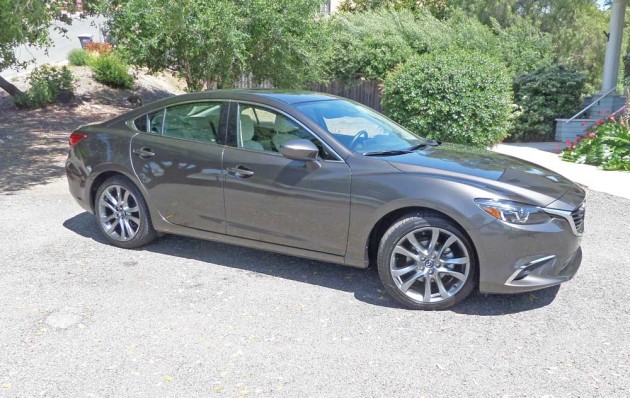 The Mazda6i flagship model debuted in 2012, earning high acclaim in global markets thanks to the alluring vitality of the KODO??Soul of Motion? design language and SKYACTIV Technology?s balance of driving pleasure, environmental performance and safety. 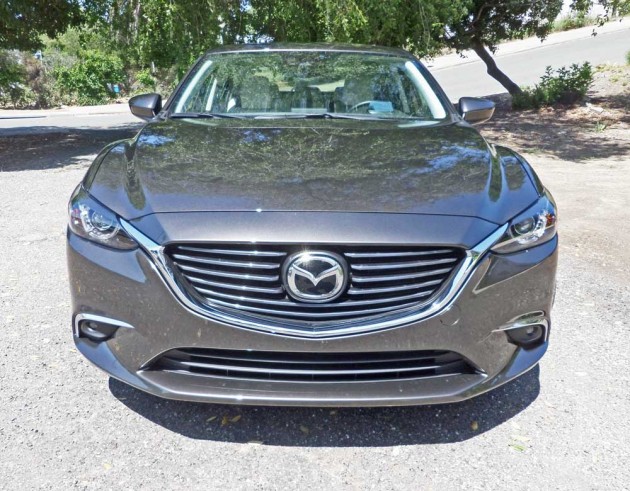 Detailed refinements to dynamic performance include improved sound insulation throughout the body with enhanced comfort for front and rear seats. These improvements provide a quieter and more comfortable riding experience.

The creation, a deeper, stronger design expression. includes: the added texture and enhanced three-dimensionality of the front grille and signature wing; the strong sense of vitality of the new headlamps that appear as eyes,; and the new design expression created by the signature wing illumination. While the influence of KODO design remains, the refreshed Mazda6 marks the evolution to a bolder and more elegant expression that lends it stronger presence. 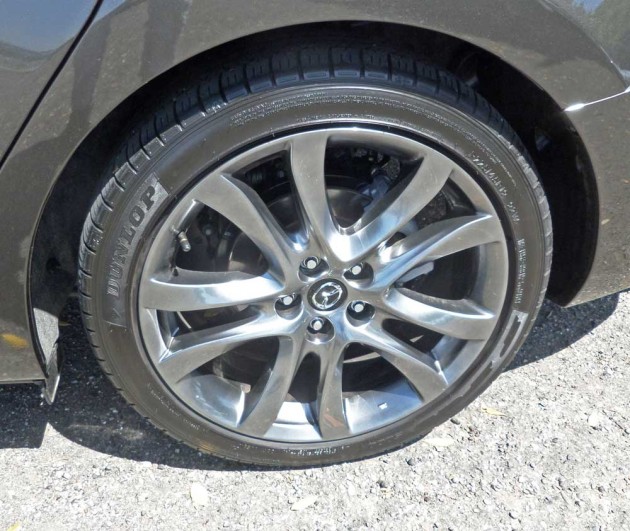 The front grille fins feature a stronger impression of horizontal flow, which combined with the dynamic shape and three-dimensionality of the signature wing creates a bolder front face with an elegant look. The LED lighting signature of the rear combination lamps gives the rear view a taut image, while the new compact shark fin antenna accents the vehicle?s flowing form and stylish aura. The 19-inch aluminum wheel with high-gloss paint adopts a darker color that emphasizes the brightness and greater depth of its metallic look.

For this round?s interior update, all details related to texture and quality were perfected, elevating the level of quality. The design team evolved the instrument panel and floor console, paying careful attention to the shapes, expressions and use of colors. Other upgrades include the adoption of Mazda?s next-generation Mazda Connect car connectivity system and an Electrical Parking Brake. The interior fuses a driver-oriented cockpit design based on the Heads-up Cockpit and an instrument panel that extends horizontally to create a passenger environment with a sense of breadth and openness. A freestanding seven-inch center display is mounted on the top of the low dashboard. The Active Driving Display provides vehicle speed and other important driving information, such as that from the advanced safety systems, in real time. The Mazda Connect car connectivity system, when paired with a smartphone makes it easier to take advantage of functions including internet connectivity and access to social networking services.

Mazda?s performance dynamics are improved by the further evolved NVH and seat performance, while also adopting Drive Selection for the SKYACTIV-DRIVE automatic transmission.

The 2016 Mazda6i Grand Touring offers an impressive slate of advanced safety technologies that further strengthen safety performance, while delivering greater driving pleasure and peace of mind. Available as an additional feature, is Smart Brake Support, which helps to avoid frontal collisions or minimize damage when traveling mid- to high-speed.

Fuel economy for the 2016 Mazda6i Grand Touring models is EPA rated at 28 mpg city/40 mpg highway. SKYACTIV TECHNOLOGY, was developed solely by Mazda, and is an umbrella term for a host of performance-oriented, fuel-saving engine, transmission, body and chassis componentry, that was introduced in the 2012 Mazda3 compact car, and fully-incorporated into the 2013 CX-5 compact SUV. The Mazda6 underwent a redesign for the 2014 model year and the 2015 lineup will be primarily a carryover in terms of styling. 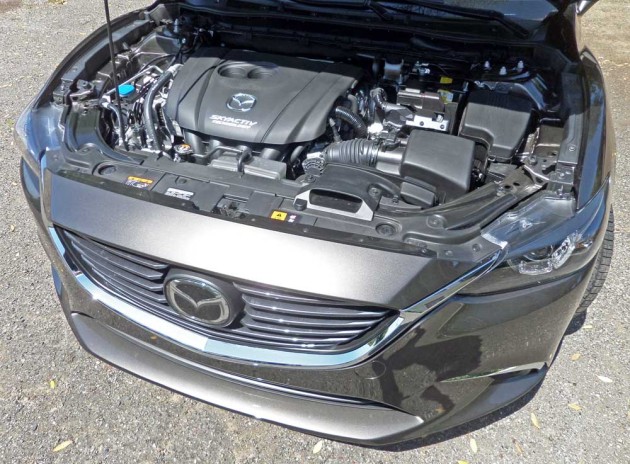 The 2016 Mazda6 continues to showcase the KODO ?Soul of Motion? design language, first expressed on the SHINARI Concept vehicle, matching nearly every sinuous sheet metal curve of its conceptual twin the TAKERI Concept. The Mazda6 displays an elongated cab-rearward stance, muscular fenders and gracefully sweeping character lines, for an elegant and dynamic profile. Up front is the new ?signature wing,? front grille that makes for a commanding presence without being overwhelming. Further exuding a fluid design form, the chrome strikes beyond the grille continue into the eagle-eye shaped headlamps. Nestled within its black horizontal lines and flanked by piano black top-line trim is Mazda?s badge prominently displayed. The lower front fascia evokes a strong chin with accompanying fog lights (when so equipped) ensconced within deep-set eyelids.

Beginning with the substantial hood and continuing along the pronounced front fenders is a bold character crease, curving and twisting itself across the A-pillar as another sweeping stroke of the metal emerges to proceed toward the rear. A third crease subtly surfaces to readjust the muscular tone into the stylized tail lamps before blending into the ?signature wing?-matching chrome piece of the deck lid. The 2016 Mazda6 is exceptionally sleek with a drag coefficient as low as 0.26 (Grand Touring only).
The 2015 Mazda6i sits on a 111.4-inch long wheelbase, with an overall length of 191.5 inches. The lean, sculptured body rolls on 17-inch aluminum alloy wheels with all-season tires, (standard for Sport models). Touring and Grand Touring models move up to 19-inch aluminum alloy wheels shod with P225/45R19 Dunlop? SP Sport 5000 all-season rubber. 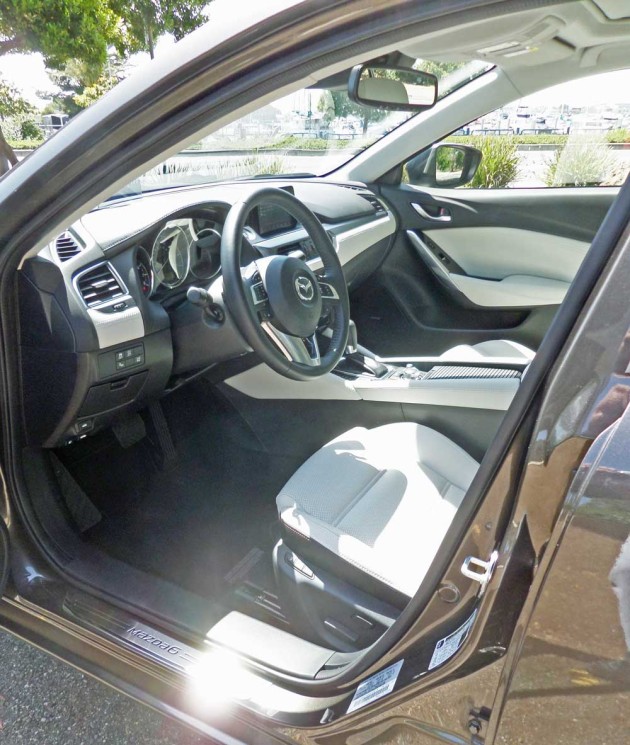 Moving to the inside, the fluidity of the exterior flows seamlessly into the interior?s styling. The cabin features driver-oriented intuitive functions, matched with well-placed operational controls. Repetitive function controls provide consumers with a variety of options based on their operational preferences, – voice control, touch screen, button pushing or knob turning, such as the available all-new commander-switch feature situated within the center console. 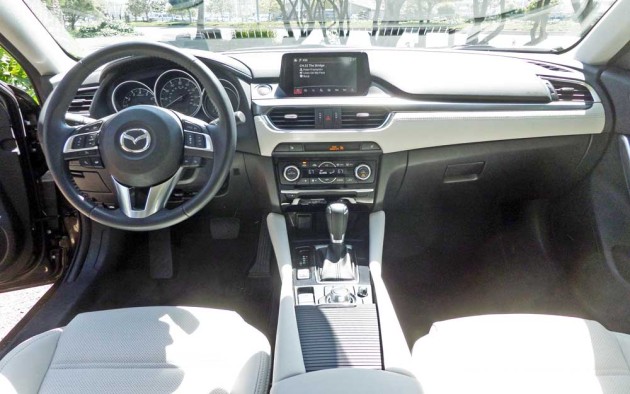 The dash is contoured and uncluttered, though still striking, with warm textures and high-quality surfaces in the form of soft-touch surfaces, such as cloth or leather features along the door panels. A dark satin finish appears on knobs and switches, making controls easier to locate as well as adding a distinctive design element. The instrument cluster offers meter lighting that makes the gauges legible in bright daylight as well as minimizing eyestrain in darkness. The three-spoke racing-inspired leather-wrapped steering wheel will appeal to enthusiasts while offering standard functional features such as a tilt-and-telescopic adjustable column with steering-wheel-mounted audio and cruise controls and paddle shifters on models equipped with automatic transmissions.

Seating is in the form of supportive, sport-bolstered front bucket seats with the spacious rear bench available in three fabrics, each with two color options. A 60/40-split fold-down feature is standard for rear seats. Six- or eight-way power-adjustable driver?s seats are standard on all but the Sport model, which is equipped with a six-way manual adjustable driver?s seat.

Connectivity is not forgotten in the 2016 Mazda6i either. A 5.8-inch in-dash touch screen commands the center console stack featuring intuitive phone, audio and navigation functions (when so equipped). Streamlined steering wheel controls enable an intuitive operation of the infotainment system.

Other available features include Bluetooth? phone and audio connectivity as well as iPod? audio playback in which iPod information can be accessed via the touch screen. USB and auxiliary jack connection ports are standard and located within the center console storage bin. An AM/FM/CD/MP3/-compatible head unit paired with a six-speaker sound system is standard for Sport and Touring models while Grand Touring models feature an 11-speaker Bose? Centerpoint? Surround Sound System with AudioPilot? as standard equipment. With a smartphone connected, Short Message Service messages may be received and shown on the touch screen monitor. The system can then articulate the messages as well as allowing users to send replies using fixed phrases. A new speech recognition system allows users to repeat and shuffle audio tracks as well as search and select folders. HD Radio? Technology and Pandora? are both new audio options for the 2014 Mazda6.

An in-dash TomTom technology-based navigation system is available for Touring, and is standard on Grand Touring models. The navigation module communicates with the head unit via a USB interface utilizing an SD card for storing map data. The SD card feature enables consumers to input customized route maps and regularly update mapping content via any personal computer.

My test 2016 Mazda6i sedan came in Grand Touring trim, with the 6-speed SKYACTIV-DRIVE automatic gearbox and finished outside in Titanium Flash Mica metallic and inside in Parchment-toned leather with Charcoal trim accents. The base sticker was set at $30,195 while options and delivery charges bumped the final price tag to $33,395.

SUMMARY: The 2016 Mazda6 I Grand Touring sedan is a highly desirable vehicle in every respect. The 2.5-liter SKYACTIVE-G engine delivers more than satisfying levels of acceleration ? especially for a four-cylinder engine, while the 6-speed automatic transmission changes gears up and down with silky smoothness, whether in fully automatic mode or when utilizing the instantly responsive paddle shifters. 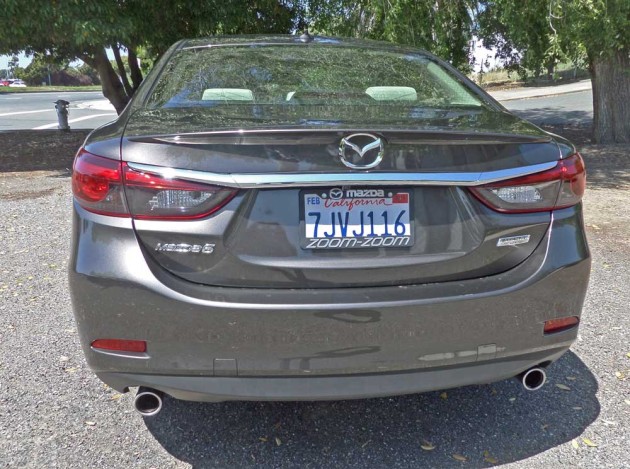 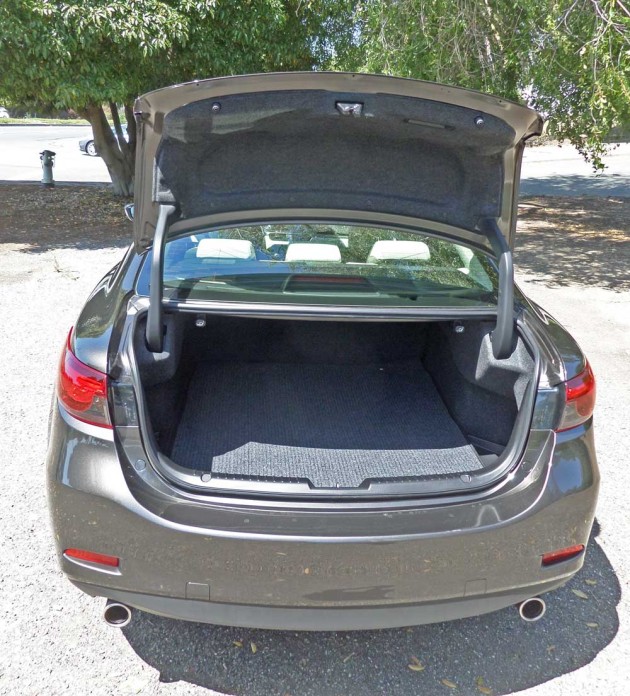 Handling attributes are stellar, with the ride quality rock solid with minimal body roll. The seating is both comfortable and supportive within the spacious cabin. Piloting the Mazda6i Grand Touring sedan borders on the experience one would normally only expect from a sport sedan.

Adding to the attractiveness of purchase, all Mazda vehicles come with the Mazda Certified Roadside Assistance Program. In addition, the New Vehicle Limited Warranty includes a comprehensive three-year/36,000-mile warranty, which covers every part of the vehicle except those subject to normal wear, a five-year/60,000-mile powertrain warranty and a five-year/unlimited-mileage corrosion warranty. 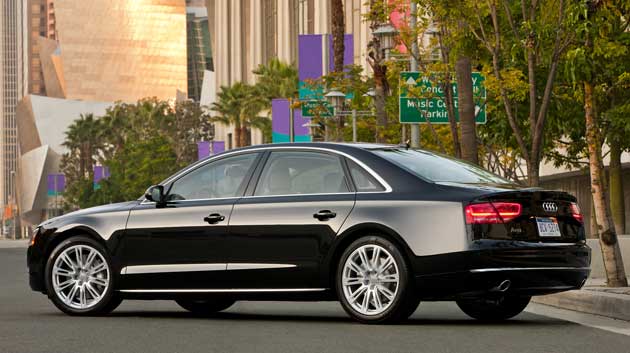 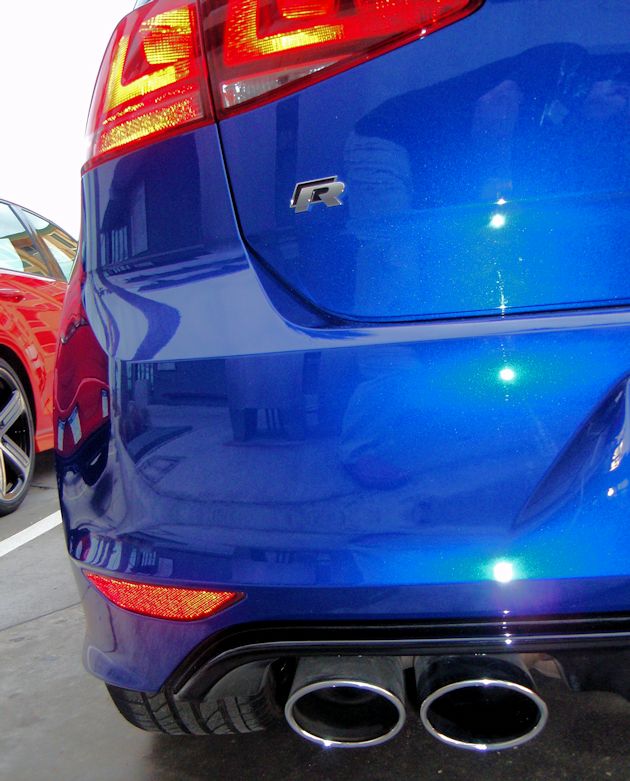