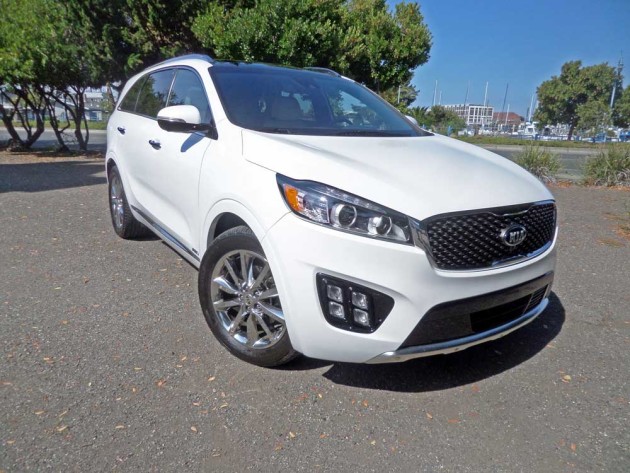 Lake Tahoe, CA & NV – The 2016 Kia Sorento represents the third generation of the Korean automaker?s popular crossover utility vehicle. It is based on the Cross GT concept vehicle that bowed two years ago at the Chicago Auto Show. Kia is also celebrating their 20th anniversary in the U.S. and has grown from 2 available vehicles to 12. 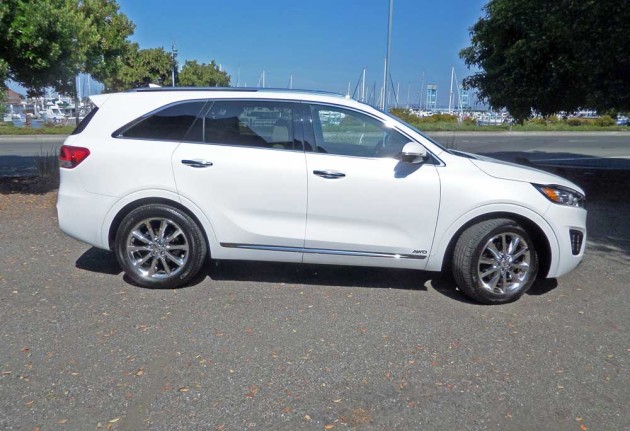 This latest iteration Kia Sorento hits the ground running, featuring a stronger body structure, a wheelbase that?s 3.1 inches longer and an overall length that?s up 3-inches as well as being wideband comes in either a versatile two or three row seating configuration and comes loaded with enhancements in driving dynamics and technological advancements. Overall cargo volume in the new Sorento increases from 72.5 cu.-ft. to 74 cu.-ft., while cargo volume behind the 3rd row increases from 9.1 cu.-ft. to 11 cu.-ft., providing increased space for essentials and active-lifestyle equipment without sacrificing rear-passenger room.

The 2016 Kia Sorento will be available in five distinctive levels of trim: the base L; an LX that moves up the scale in terms of features and equipment; the EX, SX and the flagship SXL. Dependent upon the trim level, the 2016 the five-passenger Sorento comes with a 40/20/40 folding second-row as standard fare (4-cylinder models) or in a 50/50 folding third-row seven-passenger seating configurations (V6 models). For added luxury, heated and ventilated front seats, heated rear seats, a 14-way power driver and 8-way power passenger seats, driver?s seat thigh extension, a 4-way headrest with one-button adjustment, dual-zone HVAC and Kia?s second-generation panoramic sunroof, as well as available premium Nappa leather trim seating surfaces, similar to those found in Kia?s luxury flagship sedan, the K900 are all available.
Second- and third-row passengers will enjoy enhanced comfort thanks to a 0.5-inch increase in rear passenger space for both rows and a roomier flattened second-row center floor. Access to third-row seating is improved with 1.5 inches of additional boarding space, while headroom throughout the cabin is also increased. 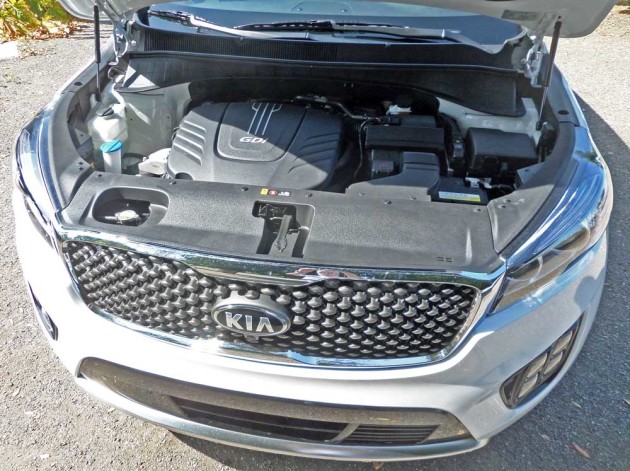 There are three engines to choose from: a new 2.0-liter, DOHC, 16-valve, turbocharged (for the first time) inline four-cylinder with dual CVVT and Gasoline Direct Injection that produces 240 horsepower at 6,000 rpm while developing 260 pound feet of torque in a range from 1,450 to 3,500 rpm; an improved 2.4-liter normally aspirated inline-4cylinder; or a 3.3 -liter, DOHC, 24-valve GDI V6 with dual CVVT that delivers 290 horses at 6,400 rpm along with 252 pound feet of torque at 5,300 rpm. All engine variants will mate to an electronically controlled six-speed overdrive automatic transmission with Sportmatic manual shift. 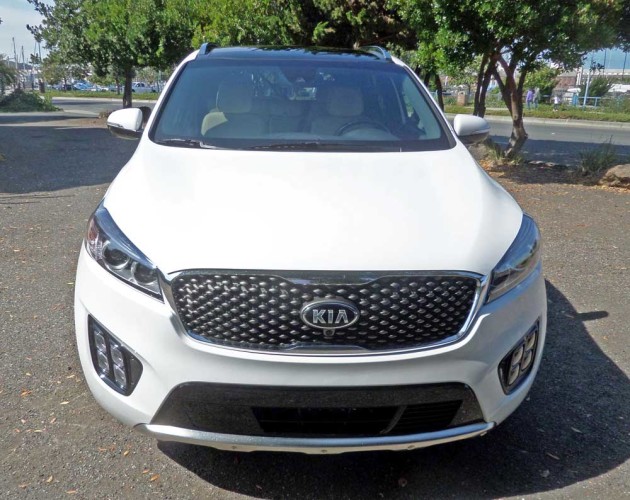 The new Kia Sorento has improved in its visual appeal, drawing some of its design inspiration from nature. Overall, the Sorento displays a, more athletic and planted stance, communicating a pleasing edginess. The profile presents a clean and simple image that?s easily recognizable as a Sorento, with stronger shoulders and a long hood that delivers a more aerodynamic and sleek persona. The Sorento?s packaging is more efficient, allowing for greater interior room. The front end is aggressively styled, and with its narrower headlight design, is an evolution of the upper fascia seen on the Cross GT concept, while bearing a strong family resemblance to the all-new Kia Sedona multipurpose vehicle. Distinctive LED positioning lights set the Sorento apart from others in the midsize CUV segment.

Sitting below the headlights, the lower intake and fog lamp pockets are more prominent, showcasing a sportier appearance that blends harmoniously with the overall styling proportions. Premium enhancements include available LED rear dimensional tail lamps and LED fog lamps. The body rides on four new alloy wheel designs ranging from 17 to 19 inches, depending on trim level. 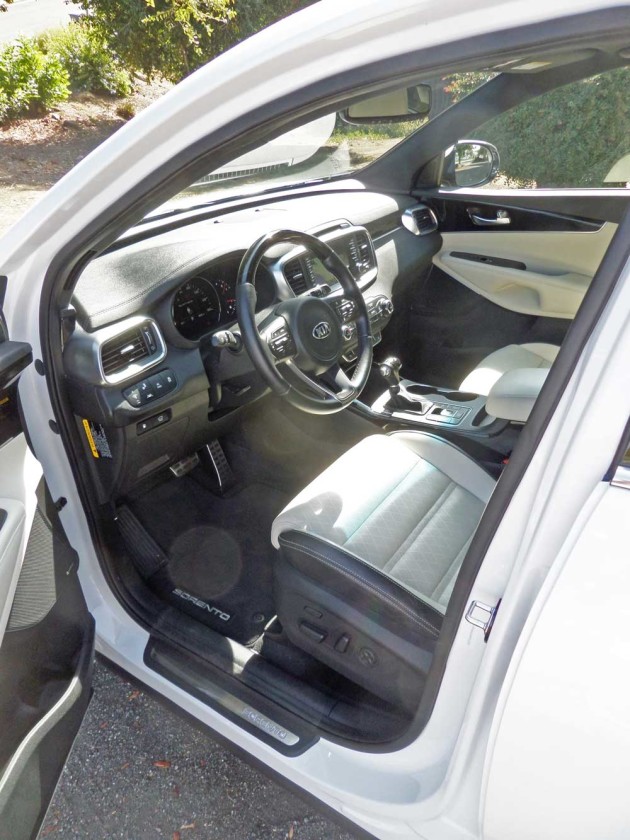 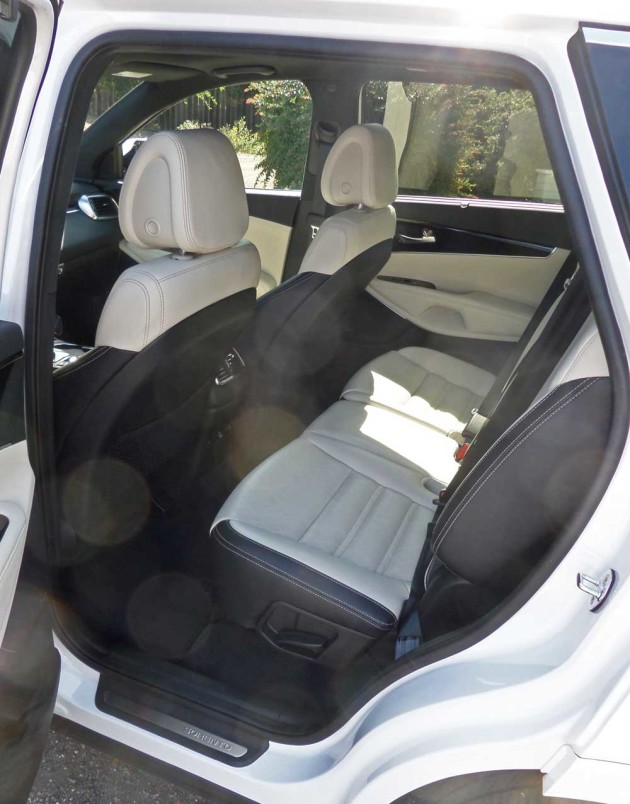 Moving to the inside, the overall interior theme focuses on the stability of a horizontal plane, with the design motif providing a strong foundation for premium textures and high-quality materials found throughout the 2016 Sorento?s cabin. 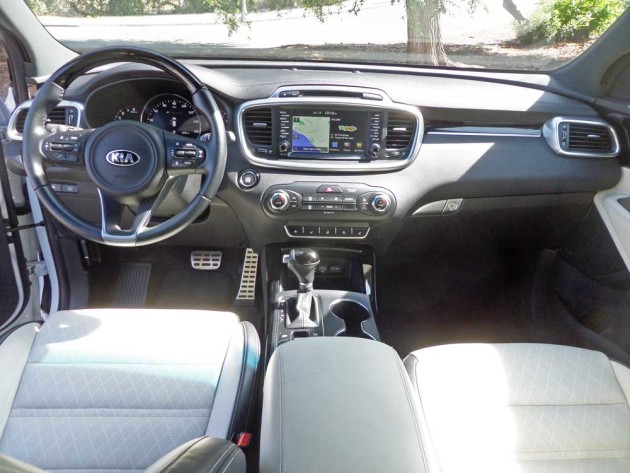 In terms of progressive technology, four additional UVO eServices are now available: Geo-fencing, Speed Alert, Curfew Alert and Driving Score. Additionally, with the introduction of the Kia App store, select apps may be downloaded at no charge from iTunes or Google Play. The Kia app connector is available for partnership with the content community for downloading apps such as Yelp, while Soundhound, Pandora and iHeart Radio will come preloaded at a later date. Other comfort and convenience technologies that are featured in the new UVO system, include Siri ?Eyes Free? and Local Search by Google ? for finding locations, addresses and points of interest. Sirius XM Travel Link, offers access to traffic, weather, fuel prices, sports scores, stock information and movie times. 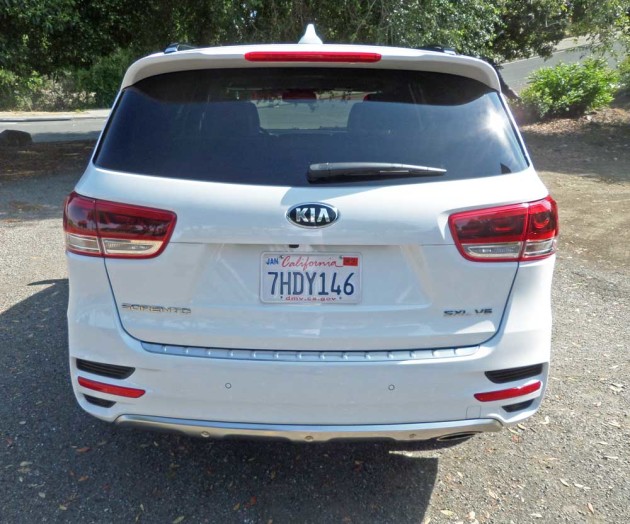 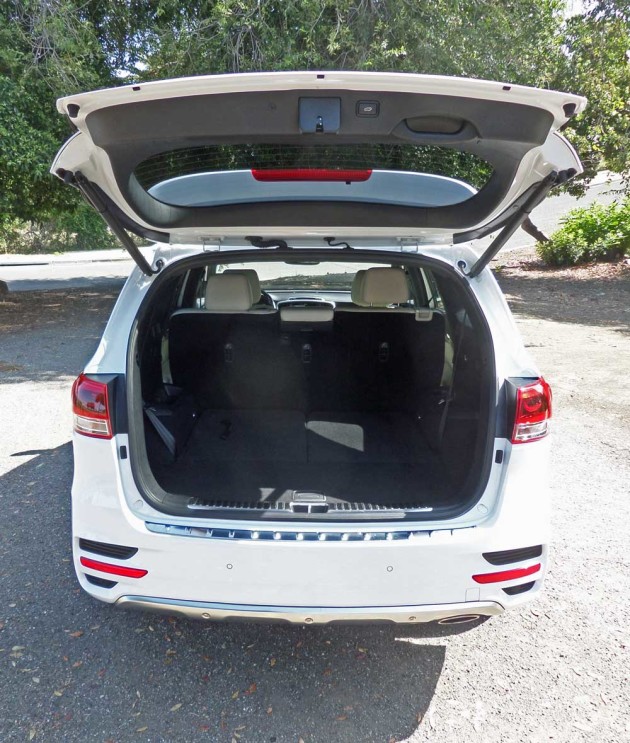 Sorento will continue to offer an advanced AWD system that automatically routes power to the wheel with the most traction. Should conditions require more sure-footed capability, a 4WD Lock Mode splits engine power evenly between the front and rear drive shafts. The system also provides drivers the added stability of Torque Vector Cornering Control, which is activated when yaw and steering sensors detect unwanted understeer. V6 models are capable of towing up to 5,000 pounds. 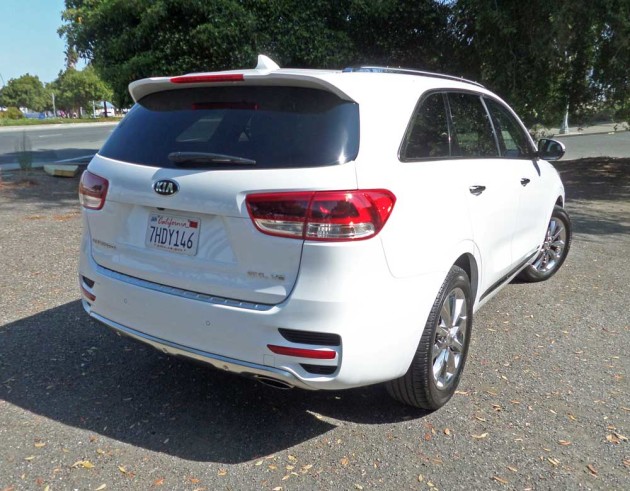 During the national media launch of the 2016 Kia Sorento, I was able to experience time behind the wheel of both the new 2.0 T and V6 powered versions in AWD and in SXL Trim. The Turbo model wore an exterior coat of Titanium Silver metallic, while the V6 sported a Snow White Pearl effect exterior. Base pricing ranges from $24,900 for the 2.0T to $43,100 for the V6. I later spent time piloting the SXL AWD 2.0T on my home turf with an exterior finish of Titanium Silver, and the interior executed in Silver and Black tones. Its base price was set at $41,700. Which increased to $45,095.after adding the SXL Technology Package and the Inland Freight and Handling Fee.

SUMMARY: Driving the all-new 2016 Kia Sorento powered by either the 2.0T turbocharged 4-cylinder or the 3.3-liter V6 provided a most pleasurable experience. Both engines provide satisfying performance levels in terms of acceleration, while the four-banger obviously has to work a little harder and emits a little more noise in the process, but not an objectionable amount.

The transmission shifts smoothly ? almost imperceptibly in either fully automatic mode or in manual mode, which proves to be somewhat more responsive. 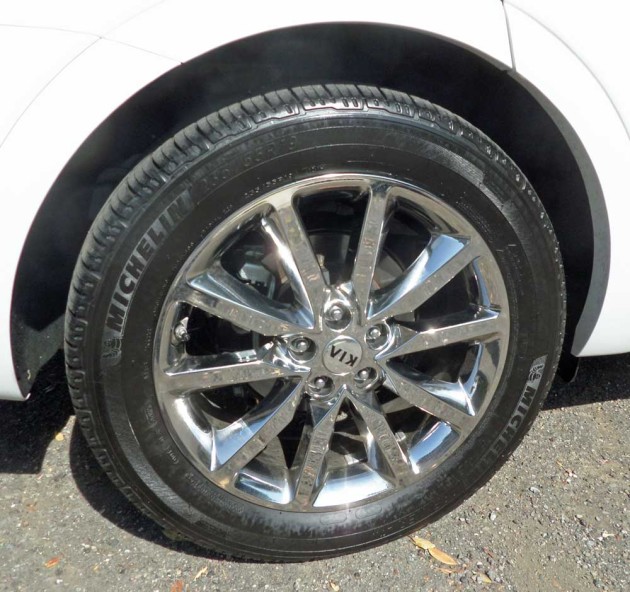 The interior ambience and the ride quality are quite pleasing ? not too firm and not too soft. Handling characteristics consist of an on-center steering feel and a planted stability.

The 2016 Kia Sorento will be built at Kia?s U.S. manufacturing plant in West Point, Georgia, where the Optima is also built.

In the final analysis, the 2016 Kia Sorento in virtually any of its configurations or trim levels, delivers a solid value in a package that is not only good looking, but is capable of fulfilling a wide variety of functional desires and individual requirements. 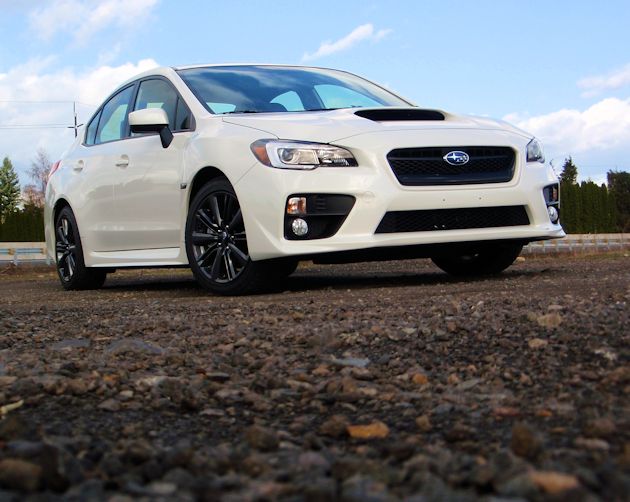 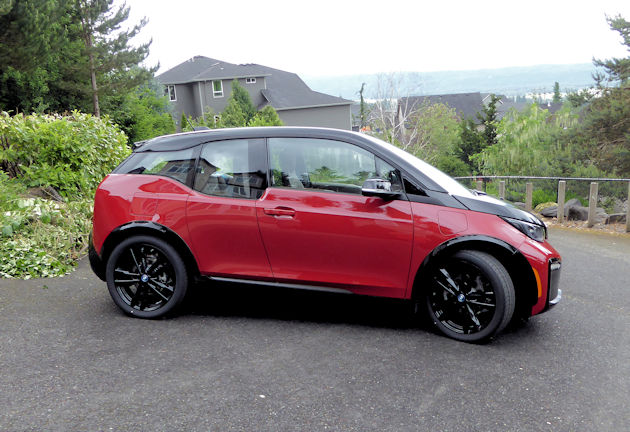