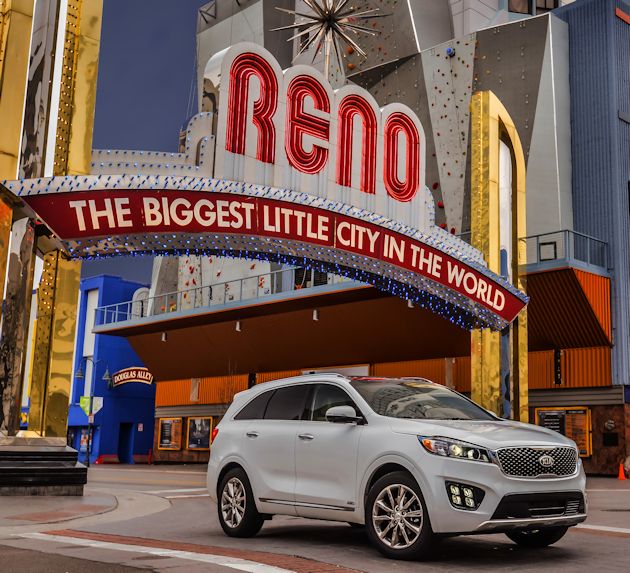 Lake Tahoe, Calif. ? I know I?ve said this before and am likely to say it again — every time Kia rolls out a new or updated model, it seems to be a major leap forward mechanically, in styling and in technology.

Here we go again; I just had a chance to drive the 2016 Kia Sorento at the introduction in the Lake Tahoe area. Already one of Kia?s major success stories, the Sorento is one of Kia?s most popular models ranking right behind the Optima and Soul in sales volume. The Sorento debuted in 2002 and has gone through two previous generations each time making that major leap forward. 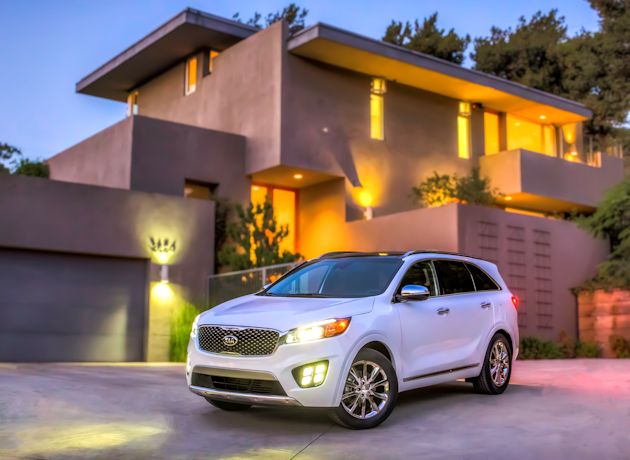 The 2016 Kia Sorento starts off with significant changes in size with all the dimensions getting a small increase in size, and the wheelbase taking a substantial 3.1 inches increase to 109.4 inches. The wheelbase increase allowed designers to deliver more headroom and legroom to all three rows and a more efficient package. For comparison, the Sorento is about the same size as a Ford Edge or Toyota Venza.

I?ve always thought of the Sorento as good looking, and the all-new version has a new level of sophistication thanks to some strong influence from the Kia Cross GT concept shown two years ago at the Chicago Auto Show. The updated look is more forceful picking up the new family design language most recently debuting on the new Sedona multipurpose vehicle.

The distinctive front end treatment now has a wonderland of lights from the distinctive LED positioning lights, down to a narrower dual projector headlight design and then to the lower fascia where there are two sets of four pod driving light groups. 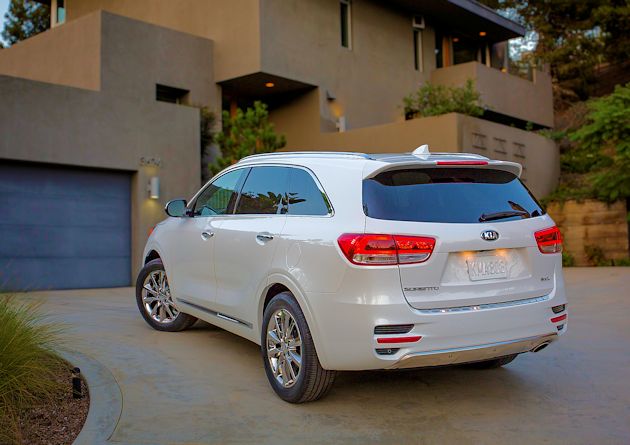 The side panels of the Sorento are simple sophistication with limited drama, with only a lower accent line and a single strip of chrome to add dimension. The rear end treatment is more complex with a high-mounted spoiler, large taillight pods (with available LED), a brushed aluminum rear deck sill cover and lower aluminum trim fascia. At bumper level there are bumper-mounted marker lights each with a pair of faux extractor grilles. 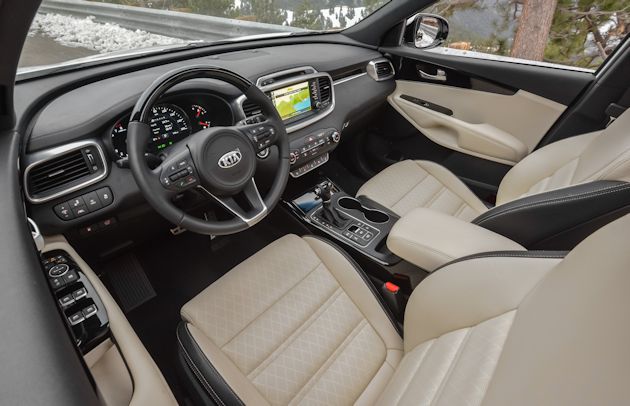 ?The all-new Sorento has been passionately designed and obsessively crafted, delivering class-up premium materials and features in a more capable package,? said Orth Hedrick, vice president, Product Planning, KMA.? ?Increased use of advanced high-strength steel and additional structural reinforcement have resulted in improved torsional rigidity, which pays dividends behind the wheel in the form of better ride comfort and driving dynamics. ?Couple that with significant reductions in NVH and it?s clear that the 2016 Sorento sets Kia?s new standard for the blending of refinement and capability.? 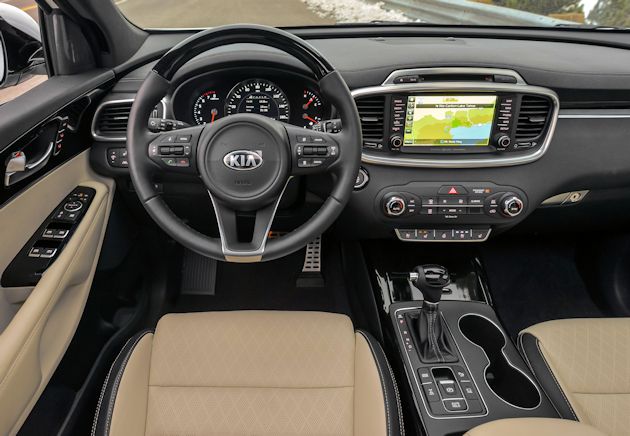 Kia interiors have shown dramatic improvements over the years and they have become some of the best in the industry, with lots of soft touch surfaces and high quality materials. Designs are contemporary and the controls user-friendly with buttons and dials that are well-marked and have positive feel.
The 2016 Kia Sorento is available in two- or three-row seating configurations which vary with the model. Interiors fabrics vary too from a durable YES Essentials fabric to Nappa leather on par with the seats found in the Kia Flagship K900 luxury sedan. There are available heated and ventilated seats in front and heated second row seats. 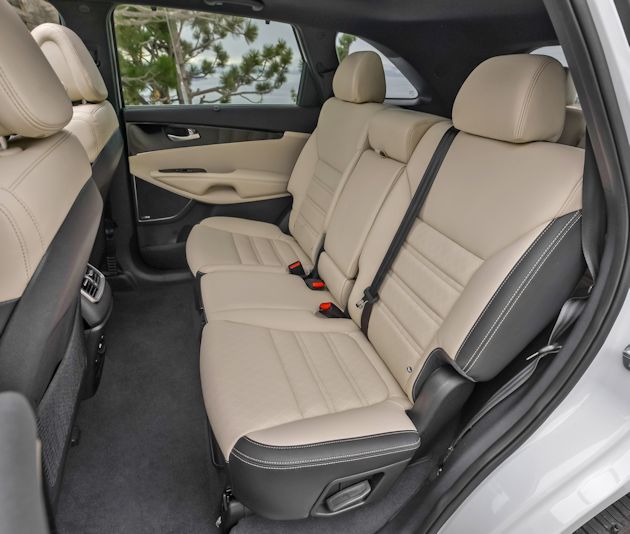 Three engine choices and five trim levels make up the 2016 Sorento lineup. Engines include a pair of four-cylinder engines: a 185-hp 2.4-liter in the L and LX models and a 240-hp turbocharged 2.0-liter in the EX and SX models. There is also a super smooth 290-hp 3.3-liter V-6 available in the LX, EX, SX and SX-L models. All three engines come with a standard electronically controlled six-speed automatic transmission driving the front wheels.All models and engines are also available with optional ($1,800) all-wheel drive. 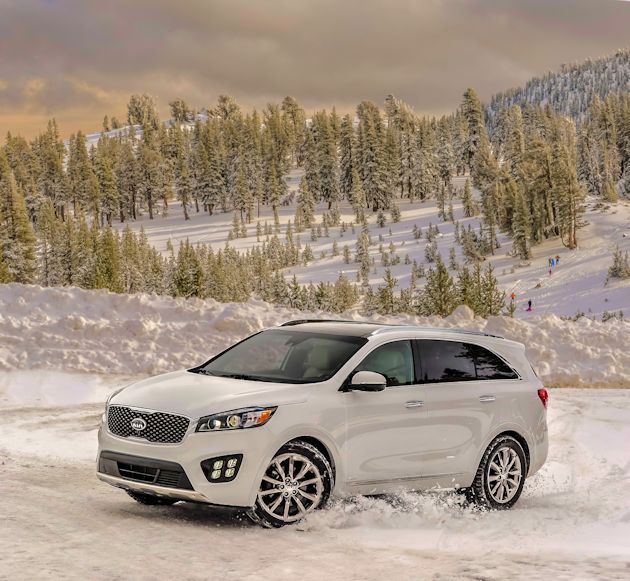 Kia engineers have made this new Sorento stiffer by enhancing the platform structure, increasing the use of industrial strength adhesives and laser welding along with using a higher percentage of advance high-strength steel. This extra rigidity enhances the ride and handling qualities.
All Sorento models have standard electronic stability control, traction control, brake assist, hill-start assist and electronic brake force distribution.?Roll-Over Mitigation and Cornering Brake Control on AWD models were also added as standard equipment this year to improved dynamic control and safety. 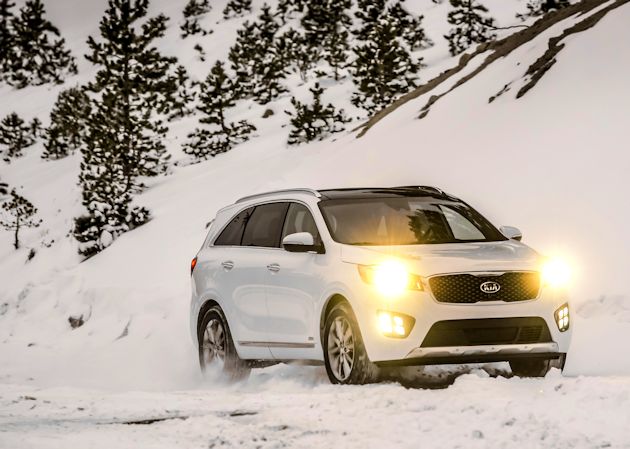 The 2016 Kia Sorento pricing ranges from 25,795, including the destination charge, for the Sorento L front-wheel drive to as high as $43,895 for the Sorento SX-Limited V-6 AWD. The only option package available on the SX-Limited is the $2,500 Technology Package which adds an electronic parking brake, Advanced Smart Cruise Control, HID headlights, Surround View Monitor, Lane Departure Warning, Forward Collision Control and Michelin brand tires. 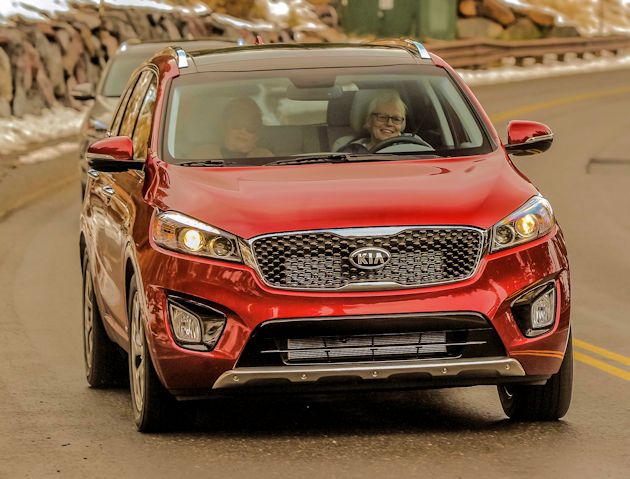 On our drive around the Tahoe basin and Reno area my driving partner and I were able to experience the impressive handling of Kia?s flagship crossover ? it felts solid and well planted with little body lean. The crossover is comfortable, quiet and responsive, especially the super smooth V-6 versions. The available 4WD system has a Lock Mode that splits engine power evenly between the front and rear drive shafts for better traction. The system also provides drivers the added stability of Torque Vector Cornering Control (TVCC).? The TVCC system is activated when yaw and steering sensors detect unwanted understeer.

It looks like Kia has another winner on their hands. 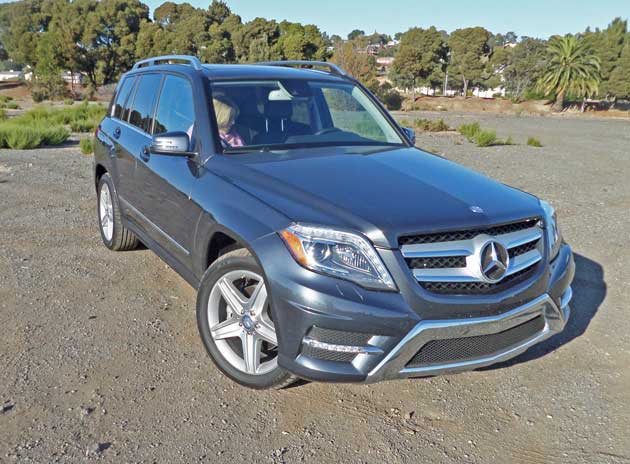