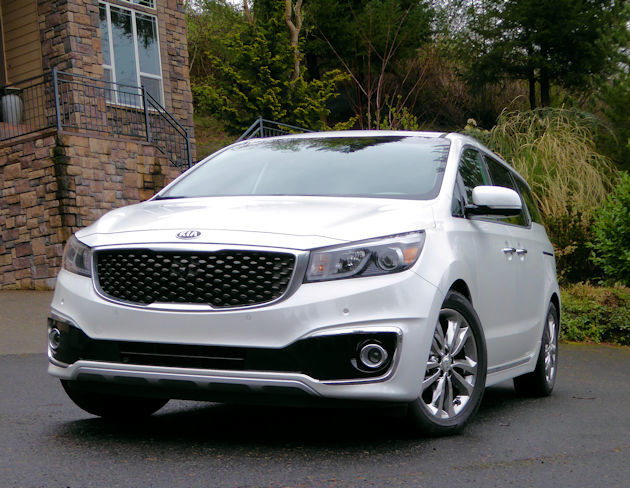 There seems to be renewed interest in minivans lately especially at Kia. Since the new generation Kia Sedona went on sale in 2015, Kia minivan sales have increased by more than 250 percent. Moving on into the first quarter of 2016, the Sedona sales are up more than 33 percent from 2015. Perhaps the current generation of moms has outgrown the minivan stigma?

Personally, we?ve never lost our ?like? of the minivan, and even at our advanced age we still would consider owning one under certain circumstances. They are still about the most practical, and passenger-friendly vehicles you can buy, plus they get some of the best safety ratings. 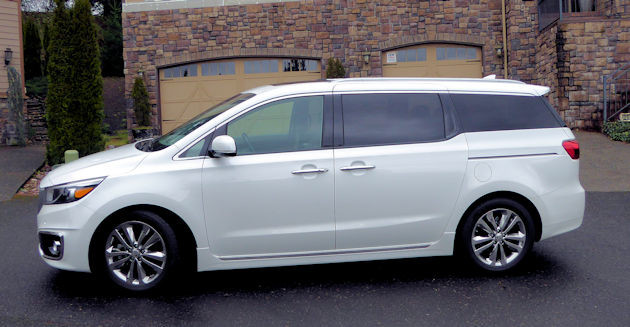 There are only five companies making what we would call pure minivans with sliding side doors, however there are many more companies making crossovers with minivan attributes. We think the Kia Sedona is one of the better looking of the fleet with its fresh new styling, complete with the Sedona interpretation of the Kia family ?tiger nose? grille. The design comes from Kia design chief Peter Schreyer, who before coming to completely change the look of Kia, was responsible for the many of the outstanding Audi and Volkswagen designs. 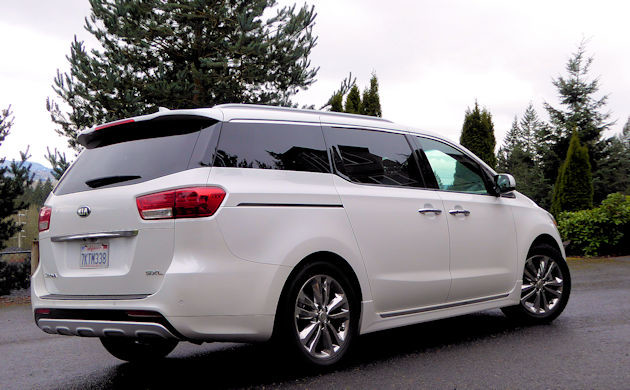 Orth Hedrick, vice president of product planning, Kia Motors America, describes the Sedona like this, ?The all-new Sedona is the final model to undergo Kia?s design-led transformation under the direction of chief design officer Peter Schreyer.? He continued, ?Beneath the strong lines is a vehicle designed for today?s active lifestyles with more power than the previous Sedona, a longer wheelbase for improved leg room and unique seating configurations, including available ?First Class? second-row seats.? Combined with intuitive technology and safety, the Sedona brings new levels of sophistication to a segment that?s been filled with bland and predictable practicality.? 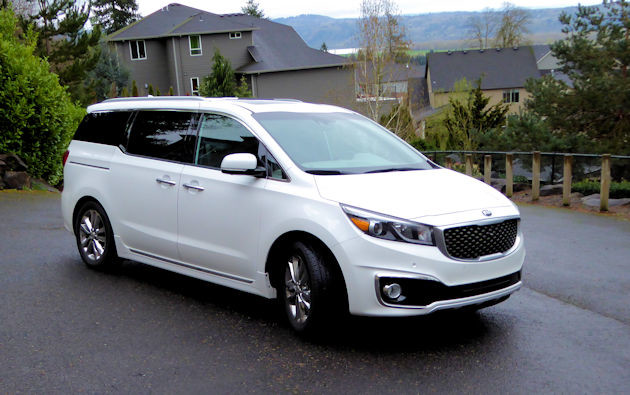 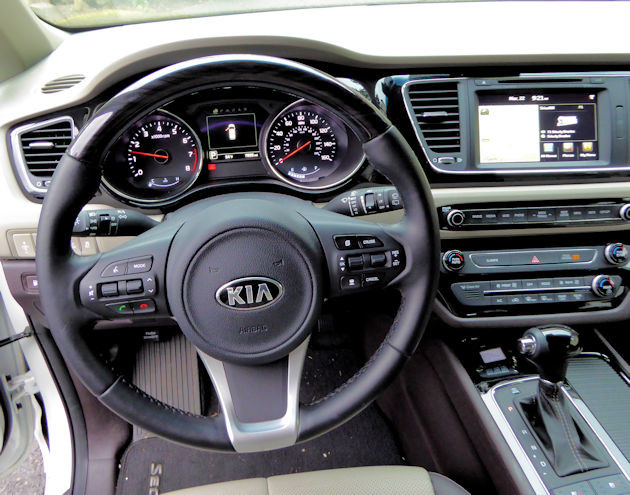 Design magic lends itself to the Sedona interior where there?s more room in most areas while the size of the Sedona actually shrinks slightly. The dash area is driver-friendly with large controls and instruments well organized in horizontal pods. 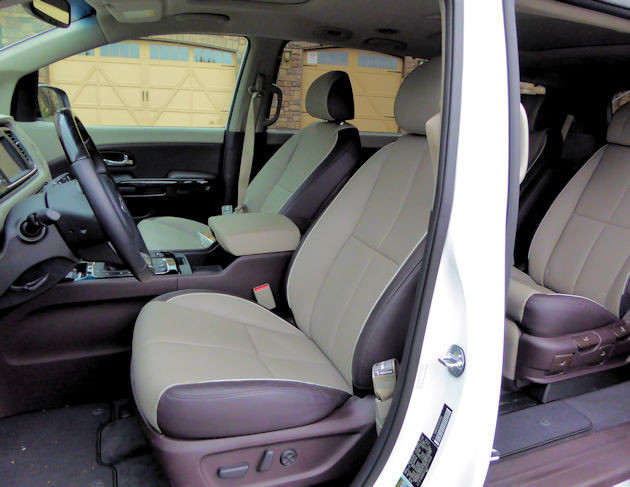 Shoppers can select from seven- and eight-passenger seating configurations both filled with a multitude of convenient storage spaces. An available feature of the seven-passenger seating is Kia?s new ?first-class? lounge seating. The two second row seats can be moved back to create extra legroom and space for the retractable lower-leg rests that give recliner-like comfort. The available first-class treatment extends to airplane-style winged headrests and heated cushions. Parents will want their children to grow up quickly and get driver?s licenses so the kids can drive and the parents can enjoy the second row seating. 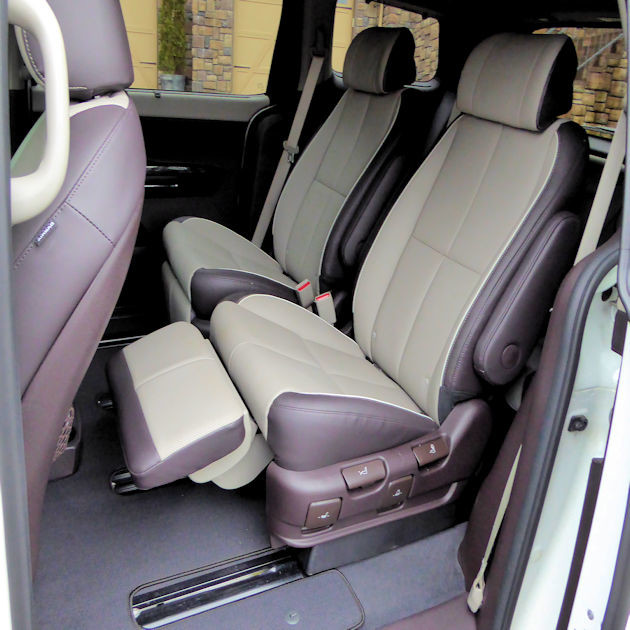 The second row seats are also part of the Slide-N-Stow system. The seats can be folded upright to allow for ?on-the-go? cargo hauling without having to remove the seats. Cargo space is a spacious 33.9-cubic feet with all three rows of seating in place and can be expanded in stages to as much at 142 cubic feet with the second and third row seats folded and stowed. 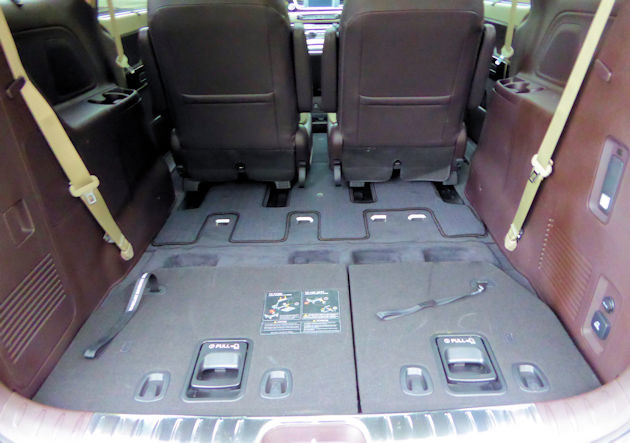 Parents will also appreciate the standard YES Essentials? fabric technology which provides anti-microbial protection from spills, anti-static protection from irritating electrical shocks as well as stain-repelling and stain-releasing fabric characteristics.?The posh leather seat option is the same as is used in the Kia K900 luxury sedan. 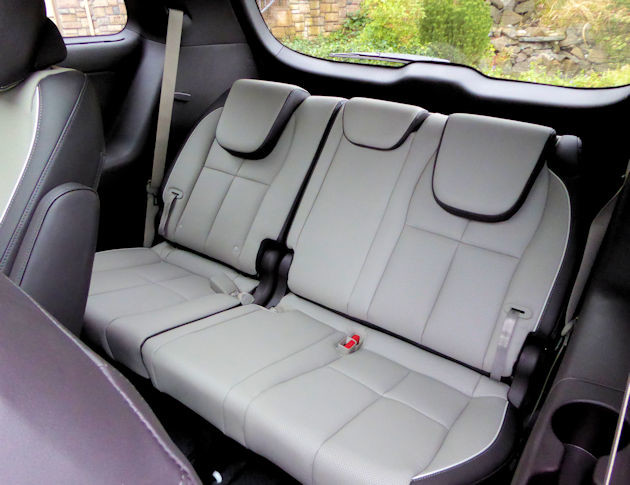 A new 276-hp 3.3-liter V-6 engine replaces the previous 3.5-liter V-6 and hooks up through Kia?s six-speed Sport-Matic automatic transmission to drive the front wheels. The EPA fuel economy is rated at 18 mpg city and 24 mpg highway. We averaged 21.7 mpg during the week we drove the Sedona.
The 2016 Kia Sedona?s are equipped with all the safety technologies like stability control, traction control, brake assist, hill-start assist, brake force distribution and antilock braking. They also have standard Roll-Over Mitigation and Cornering Brake Control. Available are additional features like Smart Cruise Control, Blind Spot Detection, Rear Cross Traffic Alert and Surround View Monitor which shows real-time images all around the vehicle on the large display screen. 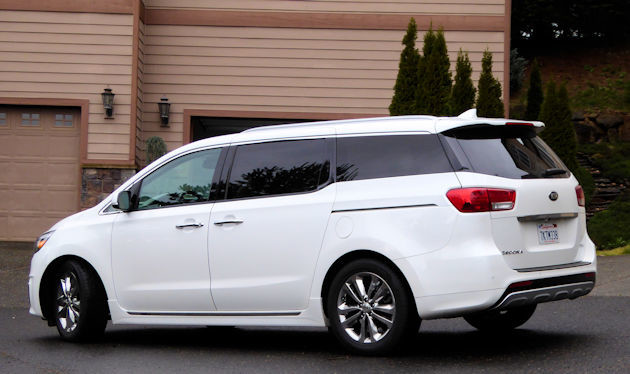 Modern digital families will appreciate the high-power (2.1 Amp) USB charging ports and 115-volt AC outlets. Another handy optional feature is the ?Smart Power Liftgate,? which opens automatically when the vehicle key fob is detected near the liftgate for three seconds; it can also be programmed to open to a certain height to avoid obstacles like low garage doors.

An important available feature is the latest generation UVO Infotainment & Telematics system which adds new eServices featuring: Geo-fencing, Speed Alert, Curfew Alert and Driving Score (notice that some features are aimed at young drivers).? Additionally, with the introduction of the Kia App store, select apps can be downloaded for free from iTunes?or Google Play. Apps are available to connect to services like Pandora?, iHeart Radio, Yelp? and services such as Siri ?Eyes Free?, local Google search and a multitude of other driver assists. 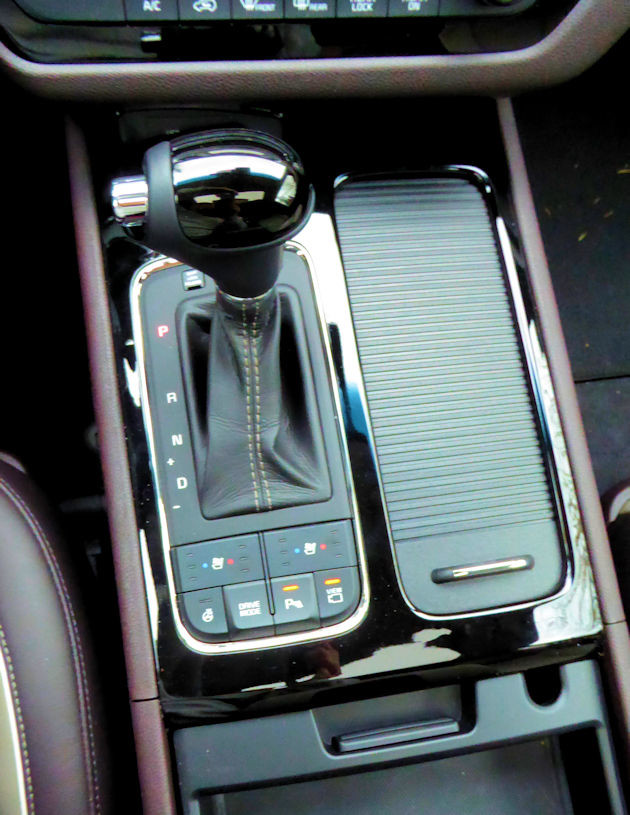 Kia pricing for the five available trim levels starts at $27,295, including the destination charge, for the L, $29,195 and go up to $40,885 for the SX Limited. The SX Limited with all the available options and some of the Kia dealer installed accessories tops out at $45,485.

From a driving standpoint, the 2016 Kia Sedona is no sport sedan, but it?s no typical minivan either. The handling is a nice balance between ride comfort and stability ? perfect for a multi-purpose vehicle. The body feels very rigid considering its size. Driving controls are accurate and user-friendly. Driving in tight conditions like parking lots and in traffic it feels agile. The turning radius is a tight 36.8 feet ? that becomes very handy when you miss a turn and have to do a quick U-turn. There are some tough competitors, but the Sedona is fresh, vibrant and loaded with the latest technologies. The 2016 Kia Sedona is a real contender ? drive one — we think you?ll like it — we did. 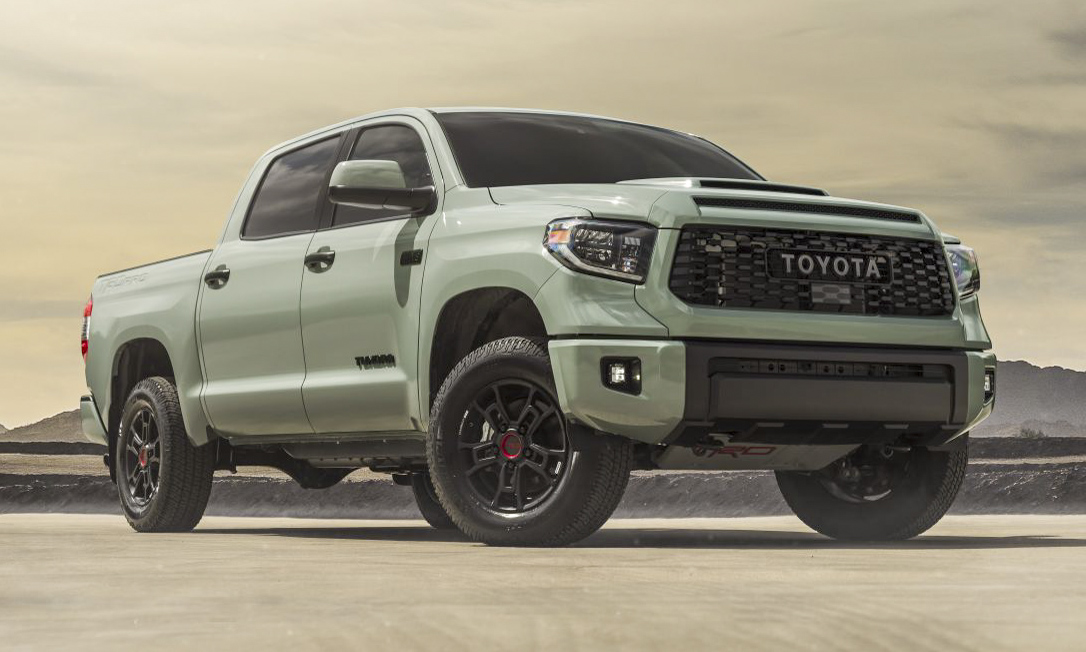 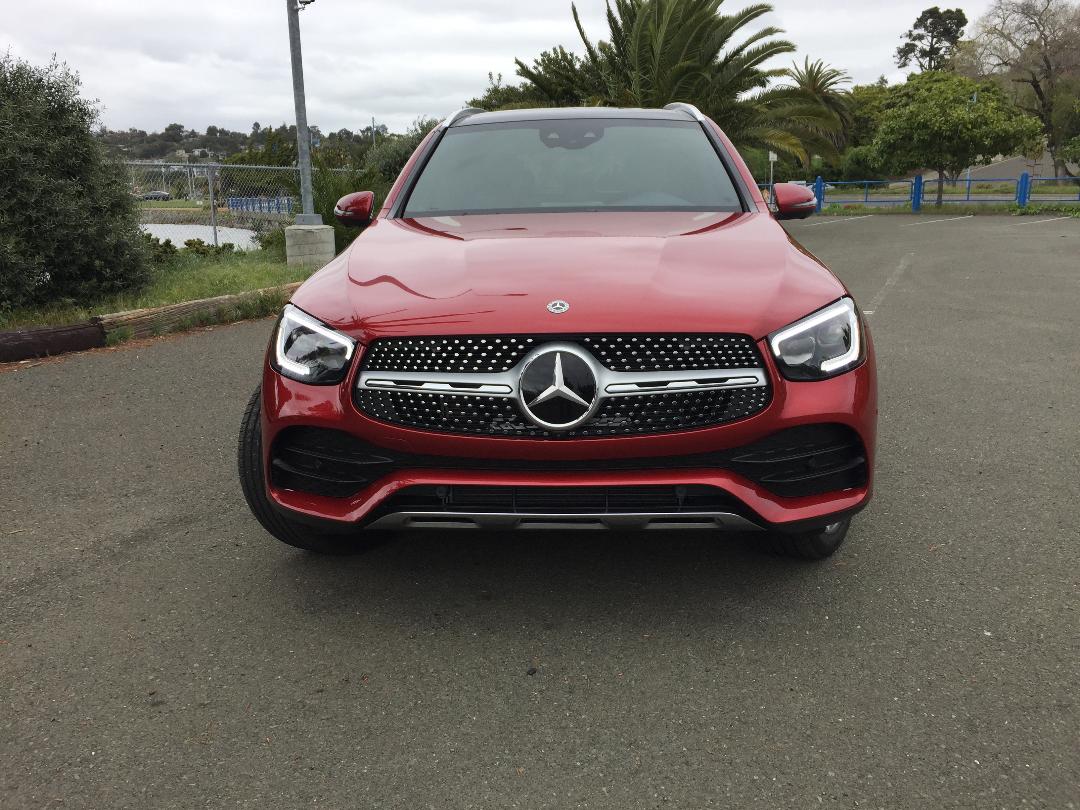