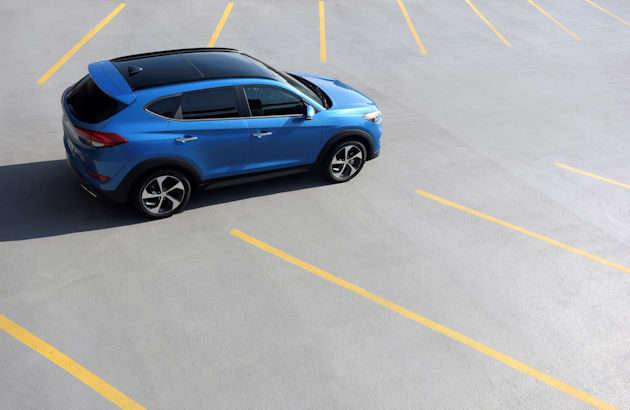 Each time a new Hyundai arrives at our house for us to test it usually becomes a reaffirmation of our premise ? each new version Hyundai raises the bar on their quality, design and technology.

This time it?s the new third generation Tucson, the smallest of the three Hyundai Crossover/SUV models. We realize we are sounding like a broken record, but Hyundai has exceeded our expectations, again. We?ve driven all the new Hyundai models since the Elantra in 1991, and each time a new or revised model is introduced it has noteworthy improvements. 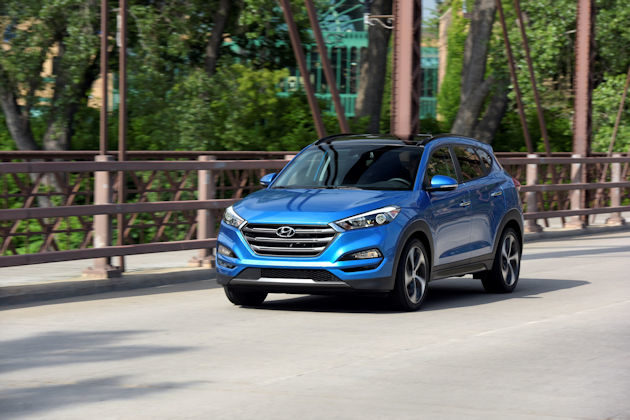 And as we might expect, the sales keep growing. Year-end figures for 2015 showed another record year of sales with total sales of more than 761,000. Speaking of sales, it?s interesting to note that the previous generation Hyundai Tucson sales continued to increase as it aged and the 2015 model (the last of the previous generation) had record sales. 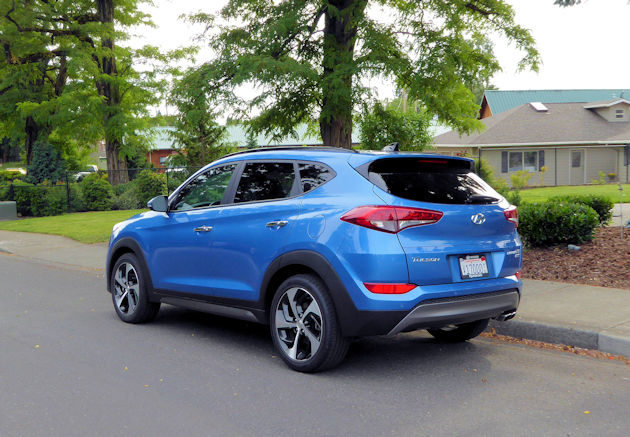 We give the Tucson a gold star for design, a spin-off of Hyundai?s Fluidic Sculpture 2 theme which debuted on the striking Genesis sport sedan a couple years ago. The Tucson design starts up front with its signature hexagonal grille, sculptured hood and available LED twin-projector headlights. The design continues along raked side paneling that give it a strong forward movement look. A clean finished rear end is accented by a high-mounted spoiler over the rear window, wide wing-shaped LED taillights and a distinctive lower panel and twin chrome exhaust outlets. The Tucson wheelbase has been increased to enrich the proportions, increase interior space and for a smoother ride. 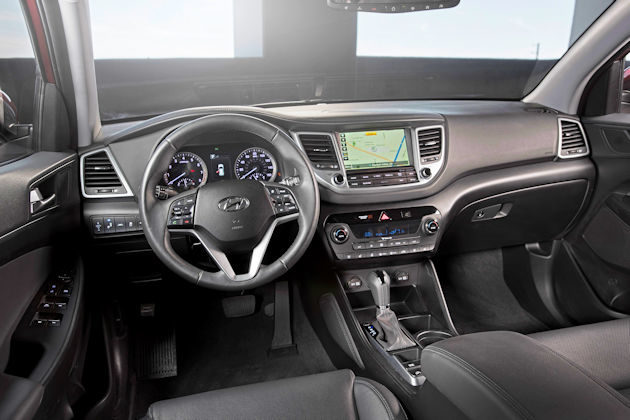 Using premium materials, the new interior treatment includes simple wide dash area with pods of instrument clusters for the entertainment, the navigation system high up on the center stack and the climate controls mid-level. At the bottom of the center stack, on the forward section of the center console is a set of plugs and connectors for charging digital devices and linking to the entertainment system. Wasting no space, the center console has a variety of storage compartments and drink holders along with the automatic transmission shifter and buttons for drive mode selection and hill descent assist. 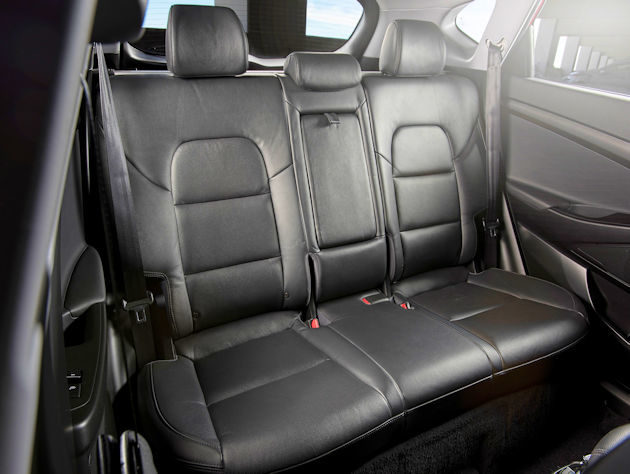 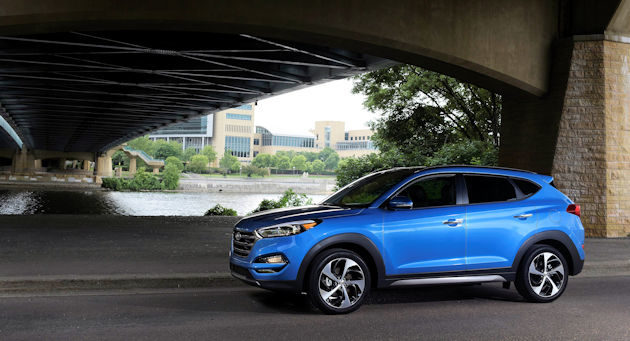 A sophisticated new 175 hp 1.6-liter direct injection turbocharged four-cylinder engine with new seven-speed EcoShift transmission is the standard drive train for the three upper-level Tucsons. The new dual-clutch transmission was developed and is built by Hyundai?it?s the first seven-speed transmission used in a vehicle in this category. The seven-speed transmission improved fuel economy and performance and it?s so nice to drive a smaller vehicle that isn?t fitted with one of the rubber band-like continuously variable transmissions (CVTs). The new drive train combination has an EPA rating of 24 mpg city, 28 mpg highway and 26 mpg combined, and 3-mpg improvement over the previous 2.4-liter engine. We averaged 25.3 mpg during our week of combined highway and city driving.

Front-wheel drive is standard, but all models are available with an advanced all-wheel drive system which Hyundai developed in conjunction with Magna Powertrain. The system has a driver-selectable lock that allows a torque split between the front and rear axles when the conditions get slippery. The system also includes Active Cornering Control which automatically transfers the torque to the wheels with the most traction, to reduce understeer and improve cornering performance. AWD models also have Hill Start Assist and Downhill Brake Control to aid the driver to make smooth safe transitions on hills. 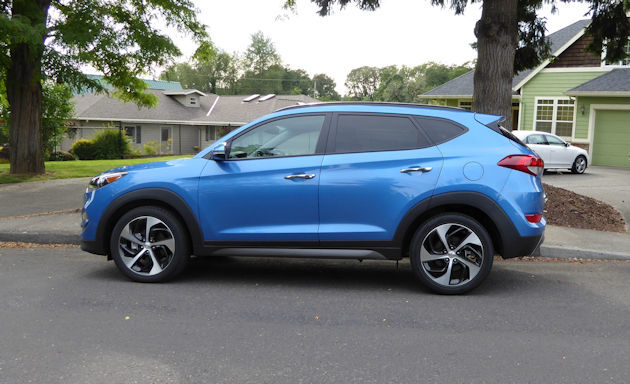 The new Tucson is three inches longer and just over an inch wider with a 1.2-inch longer wheelbase. This adds more interior space and more than five-cubic feet of cargo space over the previous model. The construction process makes extensive use of industrial adhesives to produce a more rigid body structure to improve handling, safety and to better control noise. 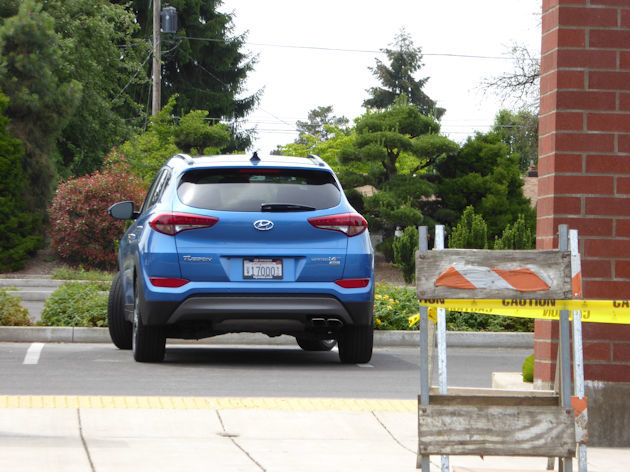 Technological improvements to the Hyundai Tucson include the latest safety technologies like the rearview camera which is standard on all models or the available pedestrian detection, Lane Departure Warning System, Blind Spot Detection, Rear Cross-traffic Alert, Lane Change Assist and Backup Warning Sensors.

Hyundai is the only auto company that makes its own steel ? this allows them to maintain quality and prices which helps make the brand more competitive. 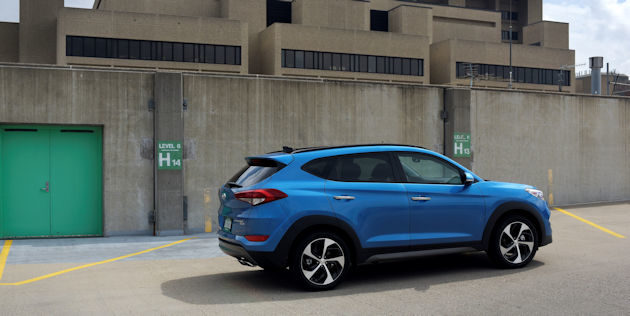 We peeked ahead to 2017 Hyundai Tucson pricing (and has changed little) which ranges from $23,595, including the destination charge, for the front-wheel drive SE and $30,670 for the Limited. With the $1,400 AWD and the only available option package on the Limited, the $2,750 Ultimate Package, the Tucson price peaks at $34,820. (The Ultimate Package adds HID headlights with Dynamic Bending Light System, Lane Departure Warning, Automatic Emergency Braking with pedestrian detection, rear park sensors, panoramic sunroof, ventilated front seats, heated rear seats and several other features.) That?s just a few hundred dollars more than the 2016 model. 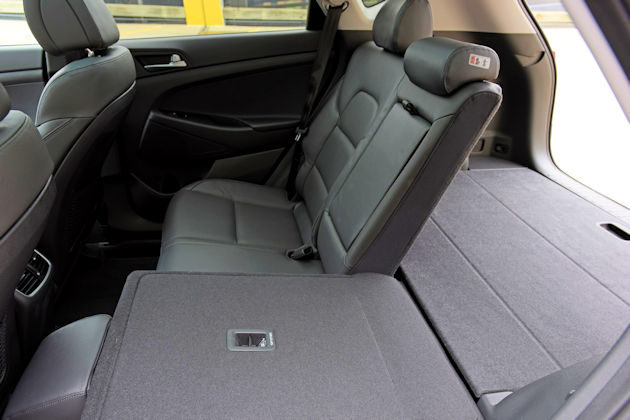 Hyundai is still on a roll, with the all new Tucson SUV/crossover. It is a step up in design, quality, performance and technology.
If you are in the market for a compact crossover/SUV, don?t overlook this one just because it?s not one of the more familiar brands on your list. For more information, check it out on line at https://www.hyundaiusa.com/tucson/index.aspx .