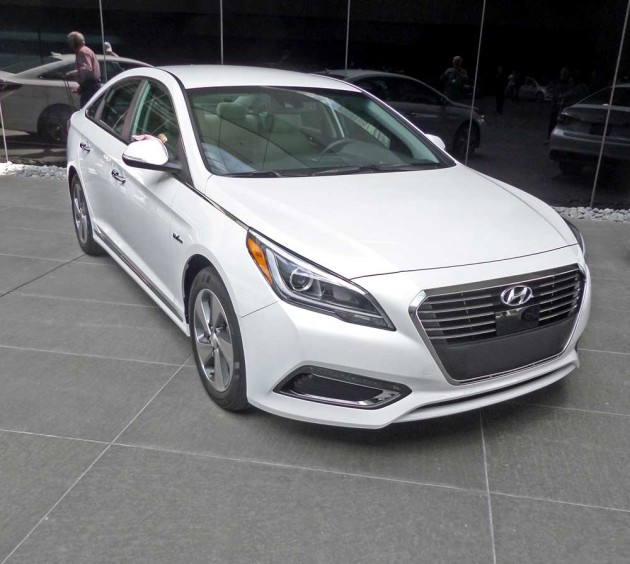 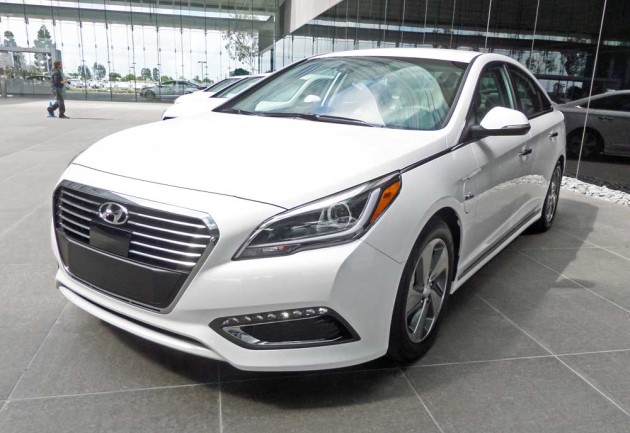 This latest iteration of the Hyundai Sonata Hybrid features a smaller displacement gasoline engine (a 2.0-liter replaces the old 2.4-liter Atkinson Cycle engine) that delivers 5mpg city and 4-mpg highway than its predecessor. The maximum voltage for the 270V electric motor produces 11 more horsepower than its predecessor while the torque remains the same. The horsepower and torque ratings for the new Hybrid are slightly less than before. The Hyundai Sonata Plug-in Hybrid electric motor cranks out 16 more horsepower than the regular Hybrid, thanks to its 370V motor and larger battery. The combined net horsepower is 9 hp more than the base Hybrid.). The drag coefficient has also improved from 0.25 to 0.24 for better aerodynamics. 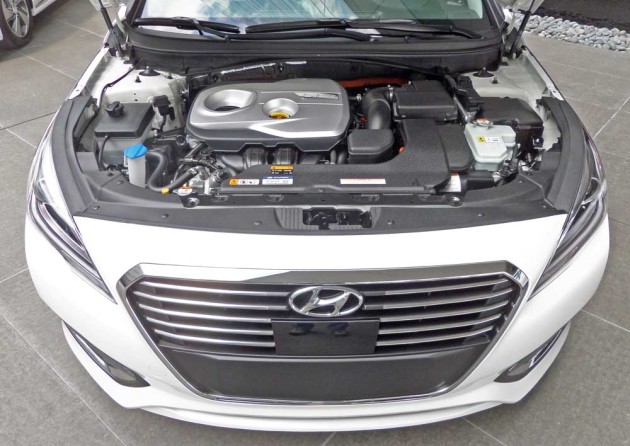 Hyundai?s commitment to leading the automotive industry in fuel efficiency continues after climbing to the top of the U.S. Corporate Average Fuel Economy rankings in 2009. With their implementation of a powertrain lineup that consisted exclusively of four cylinder engines and six-speed transmissions, Hyundai’s 2011 Sonata sedan became the most efficient vehicle in its class with an EPA rated highway mileage of 40 mpg.

The next stage in Hyundai’s top efficiency quest was the North American introduction of their Direct Hybrid Blue Drive system. The Sonata Hybrid debuted in the winter of 2010 with a powertrain that was developed entirely in-house by Hyundai that included several technical firsts. Those innovations allowed the Sonata to provide performance and efficiency improvements not available in other hybrids of the era. 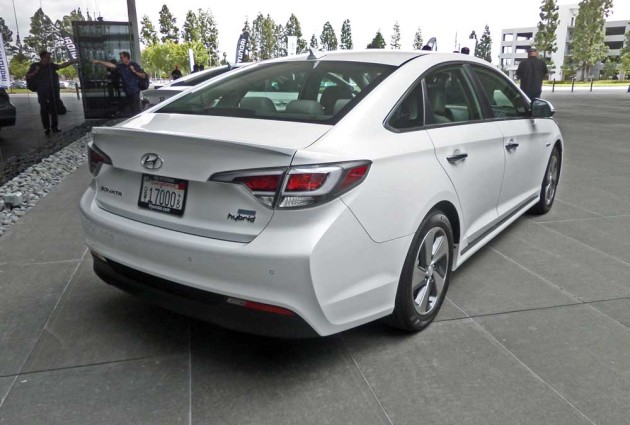 The first production application of Hyundai?s Hybrid Blue Drive debuted in mid-2009 on the Korean domestic market?s Elantra LPI mild-hybrid. Direct Hybrid Blue Drive as implemented in the 2011 Sonata Hybrid, became a full parallel hybrid system. The 2012 Sonata Hybrid could be operated in a zero emissions, fully electric drive mode at speeds up to 62 miles per hour, or in a combined gas-electric mode at any speed. When the car came to a stop and the electrical storage load was low, the engine shut down, completely eliminating idle fuel consumption and emissions. 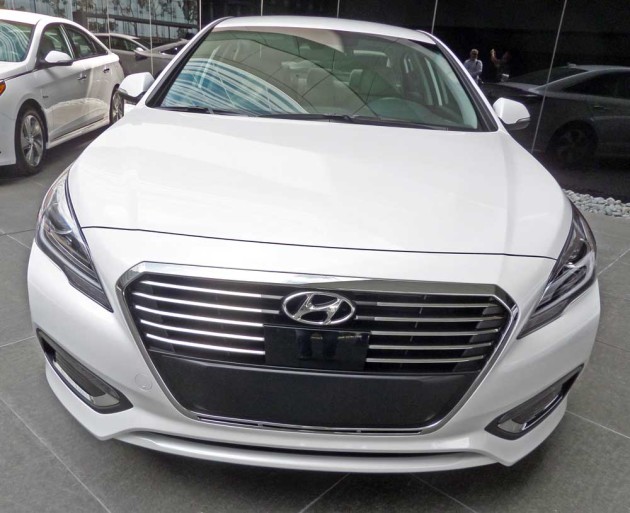 At the heart of the Direct Hybrid Blue Drive System is its lithium polymer battery pack, which Hyundai has added to its Sonata Hybrid coverage with a Lifetime Battery Replacement Guarantee to expand the benefits of Hyundai Assurance, what Hyundai claims to be the industry?s most comprehensive warranty program. The coverage applied to all 2012 model year Sonata Hybrid models over the life expectancy of the vehicle and thousands of miles beyond the average duration of new-car ownership. That first-of-its-kind protection ensured that if the Sonata Hybrid lithium polymer battery technology failed, Hyundai would replace the battery and cover recycling costs for the old powerplant free of charge to the owner. 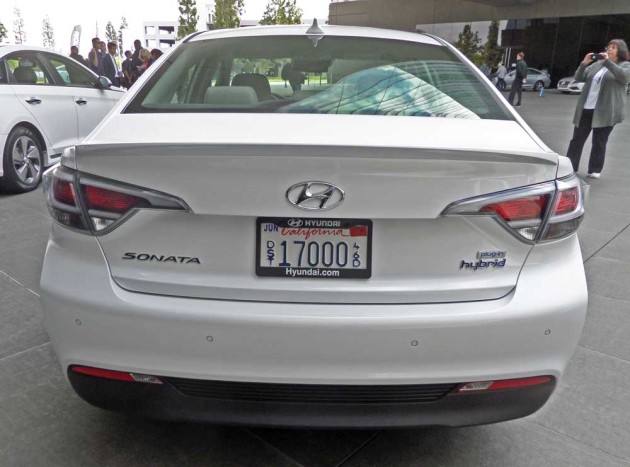 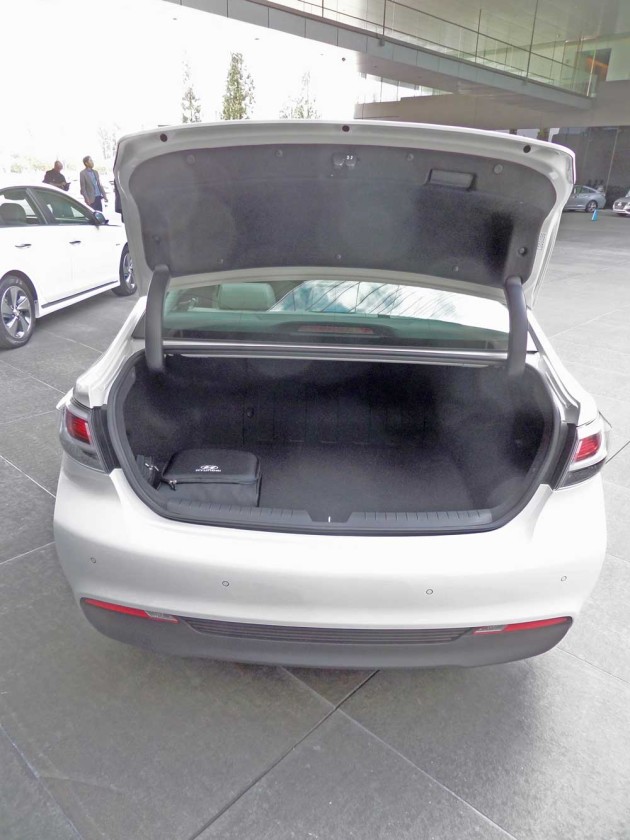 The Hyundai Direct Hybrid Blue Drive powertrain is configured with a unique architecture. In contrast to the more familiar power-split hybrid systems such as those from Toyota and Ford, Direct Hybrid Blue Drive utilizes a Transmission-Mounted-Electric-Drive layout where the motor is separated from the transmission gear-set. This modular layout offers Hyundai a number of advantages. Most importantly, the TMED configuration provides flexibility to mix and match different sized electric motors and transmissions to suit different vehicles. For example, Hyundai has different six-speed automatic transaxles in its portfolio, any of which could be utilized in a hybrid application.

The Direct Hybrid Blue Drive System consists of a 2.0L GDI 4-cylinder DOHC 16-valve with DCVVT (Dual Continuously Variable Valve Timing) that delivers 154 horsepower along with 140 pound feet of torque and a 270V Maximum Interior Permanent Magnet Synchronous Electric motor that produces 51 horsepower and 151 pound feet of torque. The combined gas/electric net horsepower is 193. The Sonata Plug-in Electric Hybrid produces 67 horses and a combined net horsepower of 202. The Lithium polymer battery output for the latter is 12kW higher than the Sonata Hybrid. The battery pack is now fitted under the trunk floor, which allow for improved cargo and passenger volume space.

The system transfers energy through a six-speed automatic transmission without a lock-up torque converter. Regenerative braking plays an important role in recovering kinetic energy lost during braking and storing it for future propulsion. 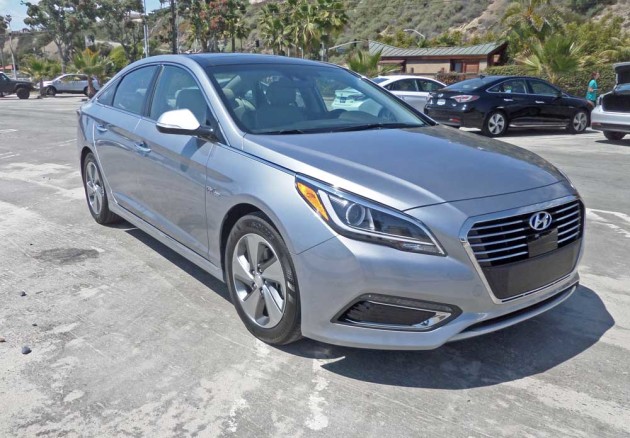 Hyundai?s award-winning design of the 2016 Sonata Hybrid continues with their ?Fluidic Sculpture? theme, but is enhanced by a series of functional changes to the front and rear fascia highlighting its efficiency and the advanced technology beneath its skin. These visual changes were instrumental in lowering the coefficient of drag to a low 0.24; the lowest in its class and identical to the Tesla Model S. Visual enhancements to the Hybrid?s exterior include a unique larger grille, front and rear bumpers, front fenders, front and rear lights, chrome side sill moldings, Hybrid badging and new eco-spoke alloy wheel designs. A distinctive instrument cluster with a 4.2-inch color LCD multi-purpose display provides Hybrid drivers with additional information about the hybrid system?s operation. Trim levels will include a base trim and Limited trim. 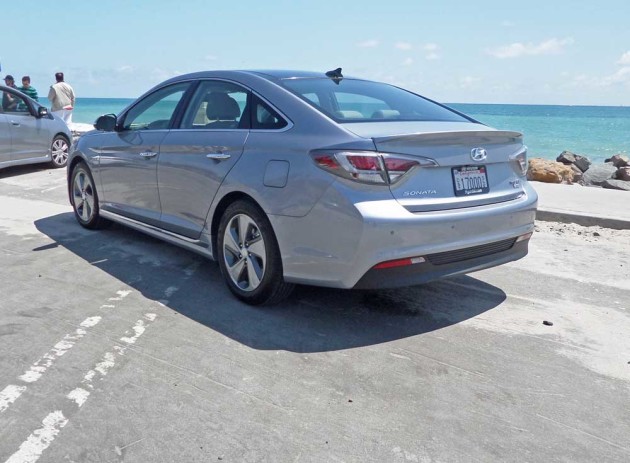 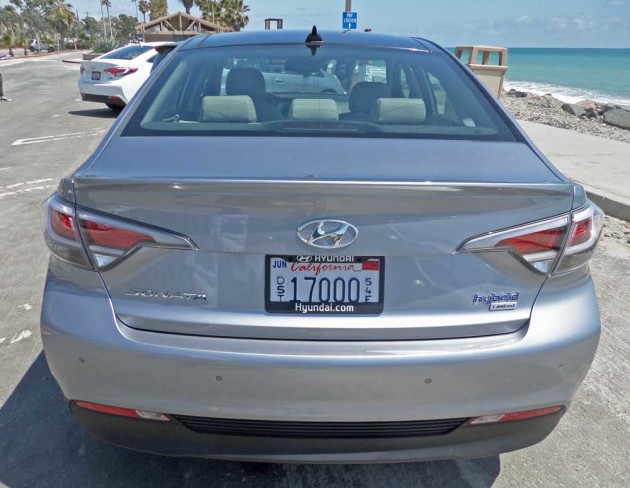 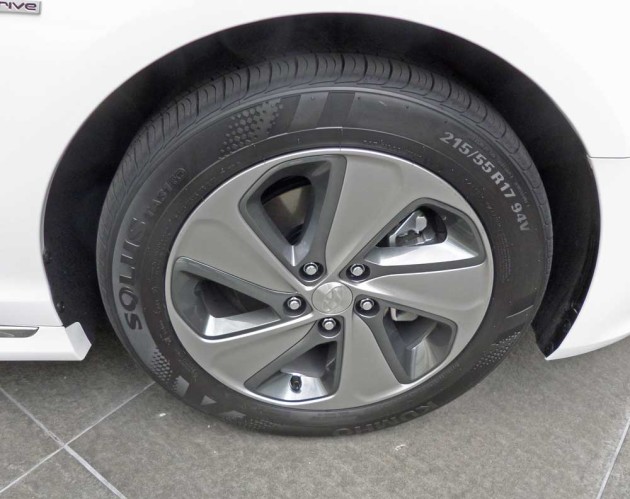 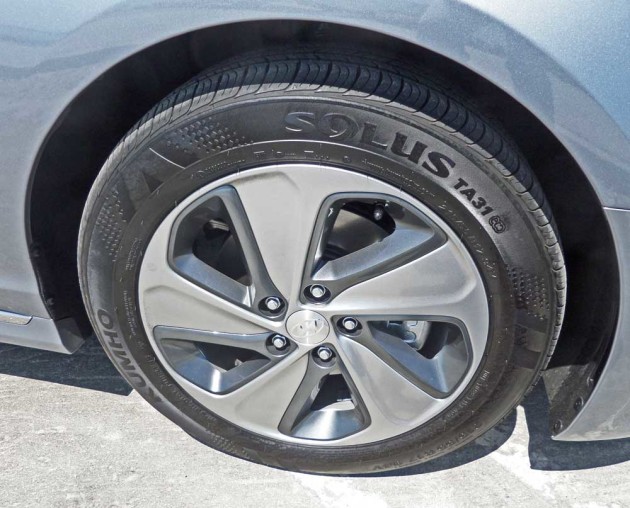 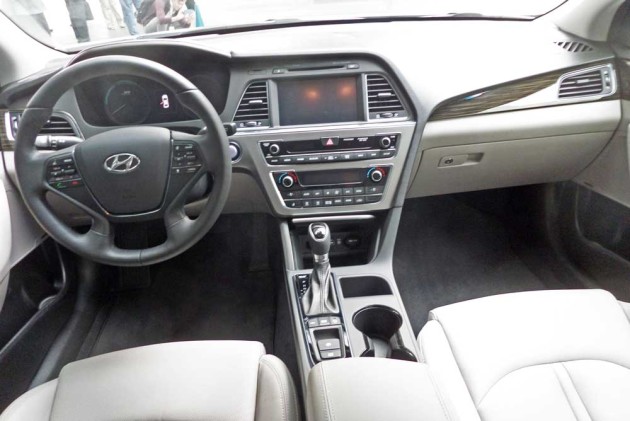 All 2016 Sonata Hybrids come with iPod?/USB and auxiliary input jacks, SiriusXM? satellite radio and Bluetooth? phone connectivity with phonebook transfer and voice-recognition as standard fare. Available upgrades include an 8.0-inch navigation system with downloadable apps, HD radio and Infinity premium audio system with next-generation Blue Link? telematics. All 2016 Sonata Hybrids equipped with navigation will also support Pandora? and SoundHound applications as well as ?Eyes Free? Siri integration, which allow drivers to perform a variety of functions without taking their eyes off the road. Apple CarPlay and Google Android Auto smartphone integration will become available on the Sonata Hybrid later this year. 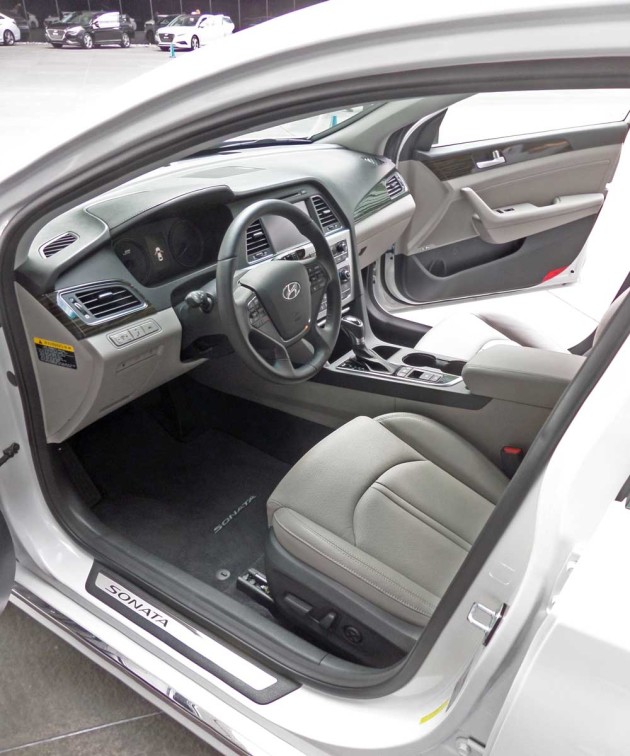 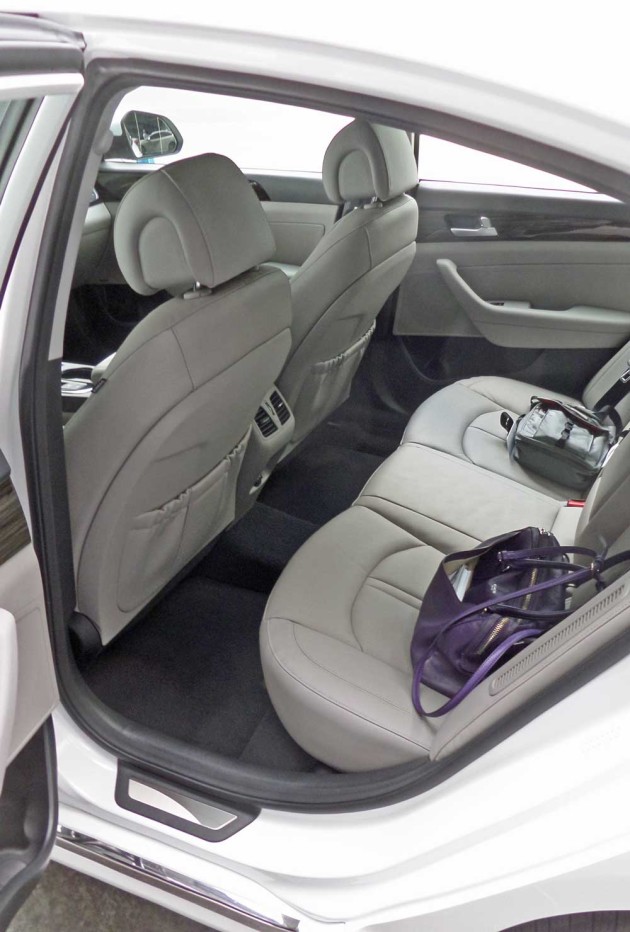 The Sonata Plug-in Electric Hybrid will only be initially available in selected states, and won?t go on sale until the fall, with pricing yet to be established. I was able to experience time behind the wheel of both models during the National Media introduction.

SUMMARY: Both the 2016 Hyundai Sonata Hybrid and Sonata Plug-in Hybrid get high marks as mid-size luxury vehicles. The performance level is admirable, with more than satisfactory acceleration and braking. The steering and overall handling characteristics are positive, but not necessarily sporty, and the ride quality and comfort are both very nice ? neither too firm, nor too soft. 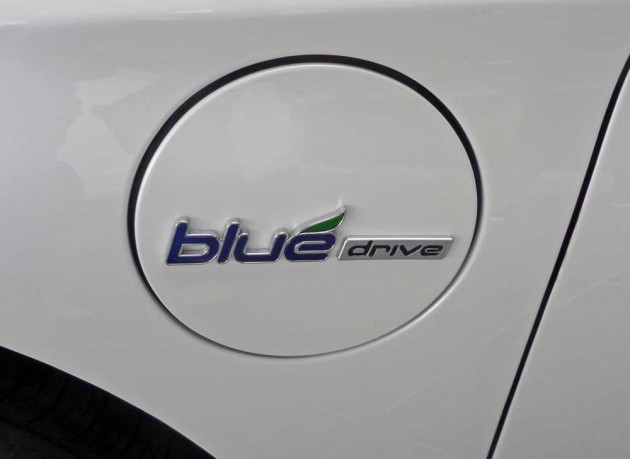 The cars are visually the same except for specific badging, and in the case of the Plug-in, there is a left side, front fender charge port door that is not on the regular Hybrid. Internally, the Plug-in Hybrid comes with a Drive Mode Select feature that allows for Eco, Normal and Sport mode with manual shift capability.

In the final analysis, the 2016 Hyundai Sonata Hybrid ranks right at the top of the list for attractive, economical mid-size Hybrid sedans. The Sonata Hybrid performed beautifully, and one is hardly aware of its Hybrid operation, which is virtually seamless except for the gas engine shutting down when the car comes to a complete stop.

The Sonata Hybrid will be built at Hyundai?s assembly plant in Asan, South Korea. 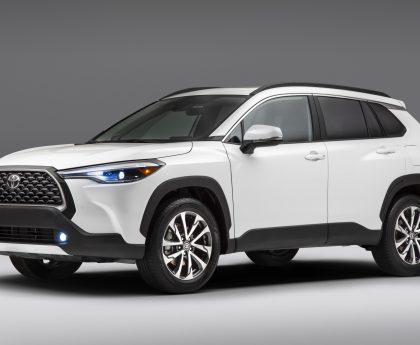