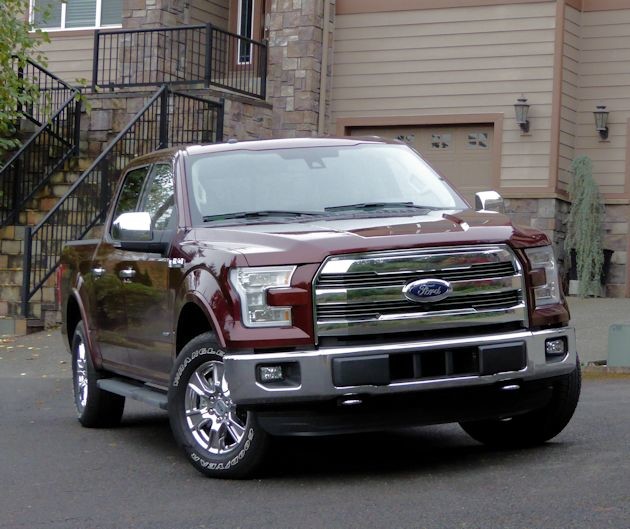 With annual sales of about 750,000 units the Ford F-150 truck numbers are staggering, plus Ford has the bragging right to having had the best-selling truck for 38 consecutive years and the best-selling vehicle for 33 years.

We?re sure everyone?s heard about the latest interesting changes, too, since Ford started building the F-150 using aluminum construction and used a turbocharged EcoBoost engine under the hood. By converting to the aluminum body (actually Ford refers to it as High-strength, military-grade aluminum alloy), Ford has been able to cut each truck?s weight by about 700 pounds while increasing the towing capacity by 1,100 pounds and cargo capacity by more than 500 pounds. The changes have also improved fuel economy by 5 to 20 percent (depending on the model). And while they don?t talk about it, these trucks won?t rust. 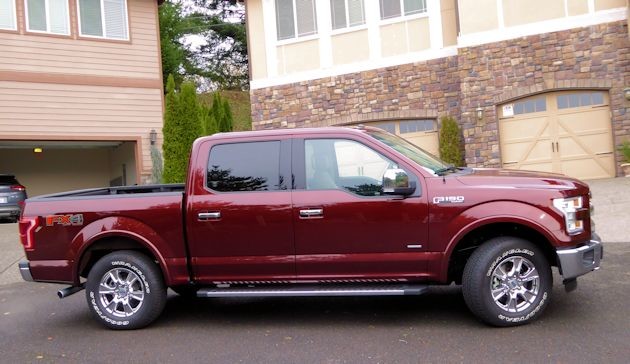 We finally had a chance to drive one of these new generation lightweight trucks, and we were impressed. Either we had fallen under the influence of all the Ford advertising and public relations or it is a significant difference because the truck felt lighter and more rigid than any Ford truck we?d ever driven. 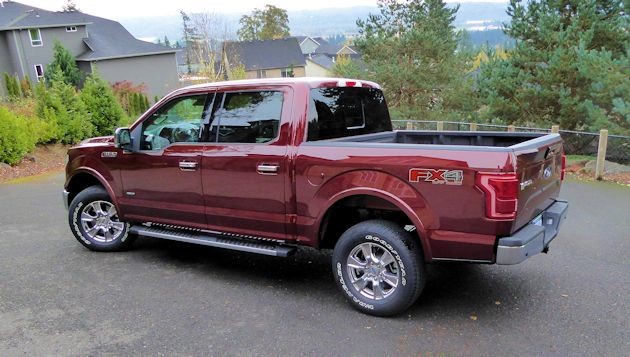 We split on the styling of the new Ford truck with Barbara liking it and Bill not so much thinking the grille was ?too in your face, and too busy.? In either case, the front end is distinctive and is used to further distinguish each trim level.

Chrome was the dominating theme on our F-150 4×4 SuperCrew Lariat. The Lariat had a grille with three broad horizontal bars with a large Ford emblem, massive chrome bumpers front and rear, chrome-trimmed running boards, large chrome mirrors along with sundry chrome accents. The front bumper had rubber bumper pads, a tow hook and driving lights. 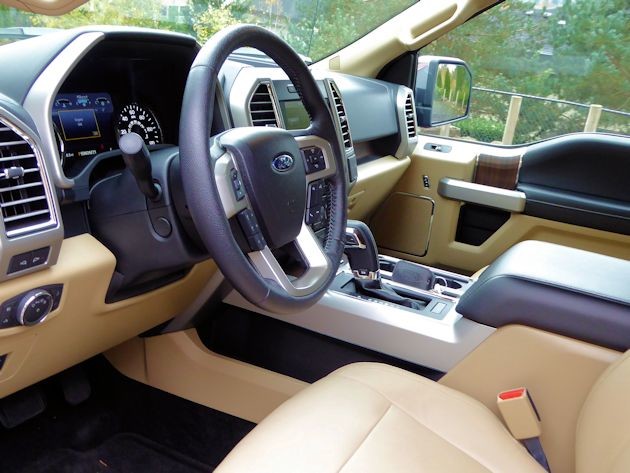 The interior of this mid-level full-size pickup was smart, with large comfortable leather bucket seats in front and a split bench seat in the rear. Each section of the rear seat can be easily folded up and out of the way to create a flat surface to carry cargo without plopping it on the seat cushion. 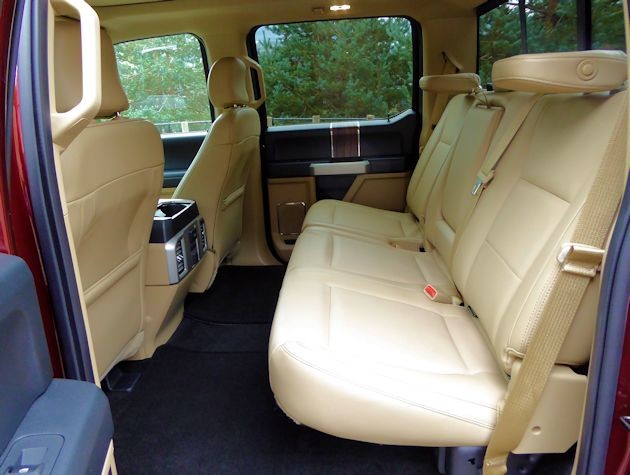 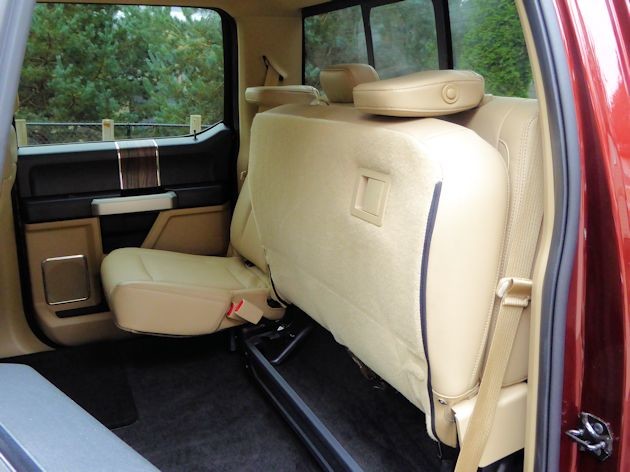 The Ford F-150 interior has a man-size dash and controls with large buttons and dials that could be easily operated even wearing gloves. Mounted between the analog speedometer and tachometer is an 8-inch ?productivity? screen, which gives the driver access to all sorts of instant data from fuel economy to towing settings to off-road information. The productivity screen can be customized to suite driver preferences. 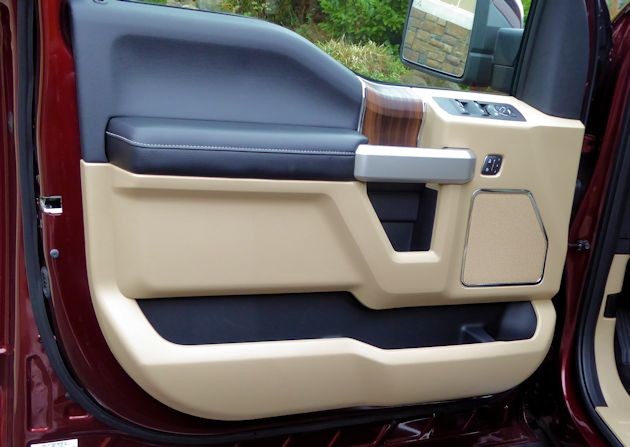 Mounted at the top of the center stack is the latest edition of Ford?s Sync which provides an abundance of information, maps, and entertainment options. We?re not sure if we are starting to understand the system, or if it?s getting easier and faster ? either way was it better.
The F-150 has such an abundance of tech and convenience features it would take pages just to list them all. If you are into the details like Bill is, go to the Ford F-150 web site (http://www.ford.com/trucks/f150/ ) and get the whole story. 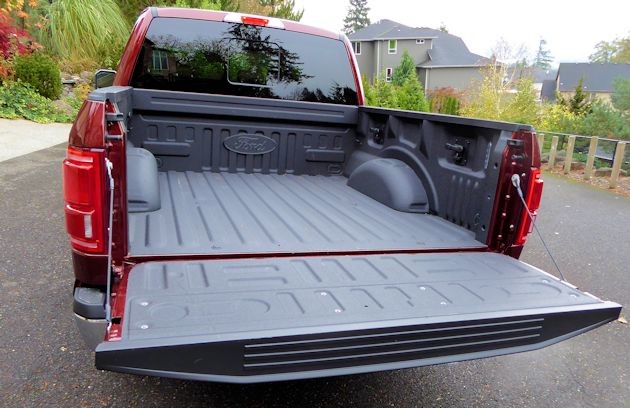 We?ve been advocates of turbocharging ever since buying a new Ford Probe GT more than 25 years ago. The car had amazing performance and fuel economy, and the new turbos are much better. When Ford installed the EcoBoost (twin turbo) engine in the F-150 pickup many people were skeptical, but it?s become the best-selling engine in that truck, and for good reason ? it is very smooth, powerful and efficient.

The Ford F-150 has two EcoBoost V-6 engine choices. Our test truck had the 3.5-liter which produces V-8-like performance with its 365-hp and 420-lb.ft of torque power. Ford claims it can easily handle a fully loaded three-horse trailer or large boat ? that?s impressive. Acceleration times for this engine as reported by the magazines with the expensive test equipment ranges all over the board from as quick as 5.6 seconds to as long as 7.2 seconds ? we think it falls more in the middle of that range. Our test truck had an EPA rating of 17 mpg city, 23 mpg highway and 19 mpg combined. We averaged 18.6 mpg during our week of day to day driving conditions. 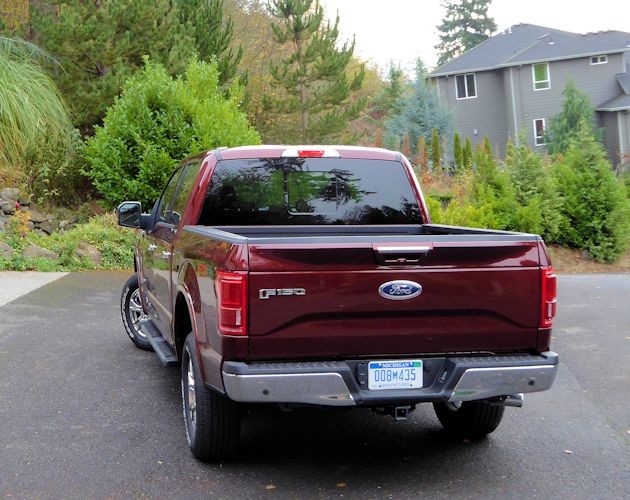 The other engines choices include a 283-hp 3.5-liter naturally aspirated V-6, a 325-hp 2.7-liter EcoBoost V-6 and a 385-hp 5.0-liter V-8. Four-wheel drive is available on all models and some models are available with the FX-4 off-road package which adds capabilities like an electronic locking rear axle, skid plates and special shocks.

Two six-speed automatic transmissions are available, the optional SelectShift? version offers two modes of operation. It allows the driver to reduce the range of gears while operating in the drive mode or to shift manually using the toggle on the side of the shift control and on the upper level models with the shifter on the console. We?re not crazy about the toggle system, it tends to be a little awkward to use. Our choice is for steering wheel mounted shift paddles or secondly a gated shifter. However, a toggle shift is better than not having any manual shift controls. 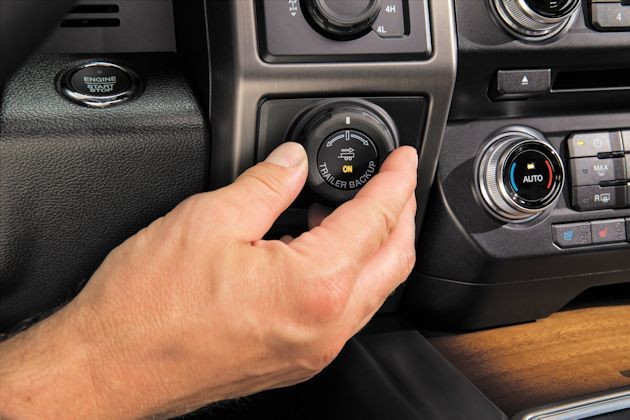 A very cool new feature on the 2016 models is the Pro Trailer Backup Assist?. Simply activate the backup control knob on the dash, then watch the backup camera and the mirrors. Then turn the knob in the direction you want the trailer to go and it actually steers the truck for you to put the trailer exactly where you want. And the system even alerts the driver of obstacles in the path. 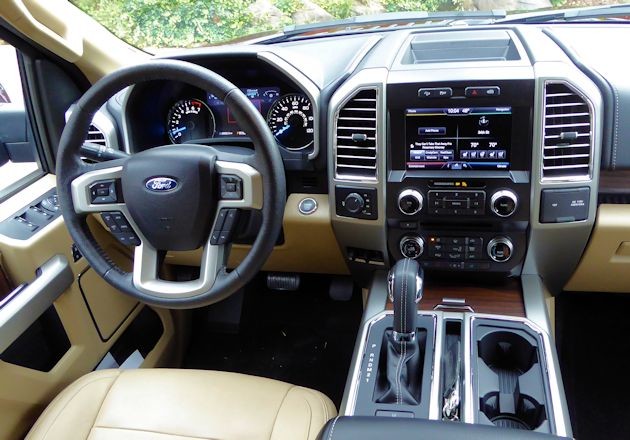 The 2016 Ford F-150 pricing ranges from $27,510, including the destination charge, for the Regular Cab XL with the naturally aspirated V-6 engine, two-wheel drive and a 6.5-foot bed. Our mid-level Lariat with 3.5 liter EcoBoost V-6, four-wheel drive with SuperCrew cabin had a base price of $47,835 and a total price of just under $60,000 with nearly $12,000 of options. The top of the line Limited with the V-8 engine, four-wheel drive, and all the options goes to just over $68,000. These upper level models are more like luxury sedans than trucks.

Overall we enjoyed driving the Ford F-150. It?s responsive, feels exceptionally solid and even a bit agile, despite the large size. Steering, brakes and handling are very good, and it?s easy to see why Ford has been the best seller for 38 years. 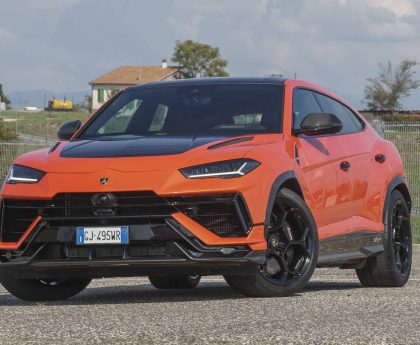 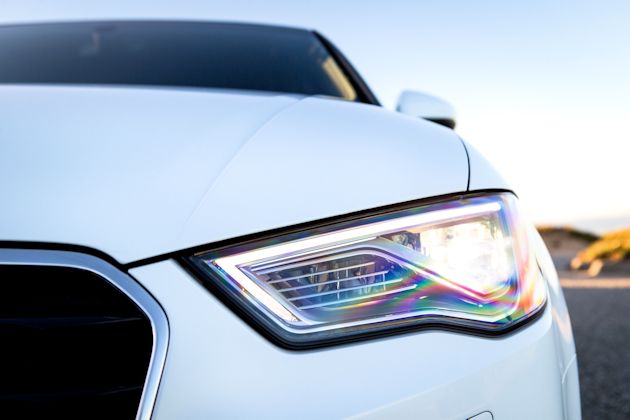