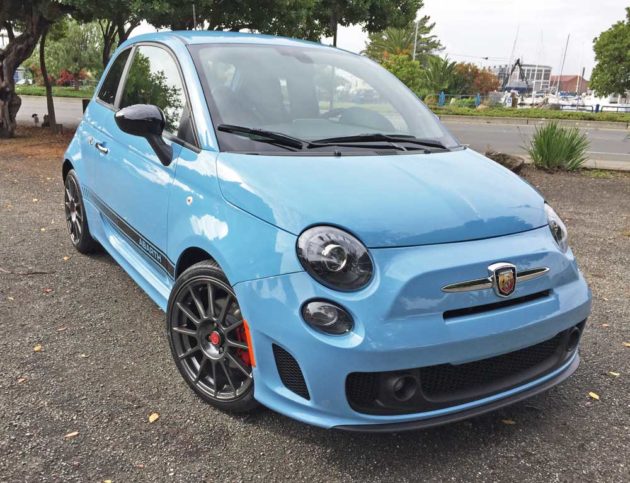 In the case of Fiat, the Abarth moniker, with its iconic scorpion logo, is a highly recognizable symbol not only in Italian performance circles, but worldwide. What?s in a name? The name comes from Karl Abarth ? a man, a brand, and a name that is synonymous with a host of racing victories ? 10,000 individual race victories, 10 world records and 133 international titles are part of the rich racing heritage of the Abarth marque. Today’s version is the Fiat 500 Abarth. 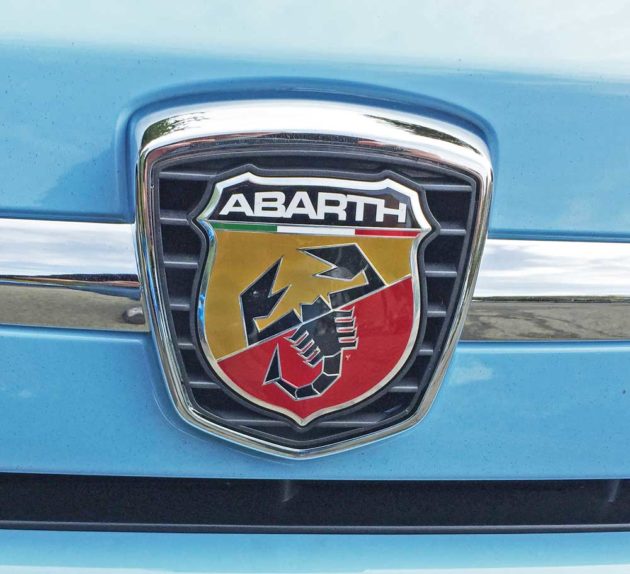 First off, let?s get the pronunciation squared away?In Italian, it?s not AAAAbarTH or AHBarTH, but rather AHHbarT. Now we can proceed to expound upon the little Cinquecinto?s claims to fame. Hagerty, an insurance company for collectible vehicles, has indicated that the Abarth edition of the Fiat 500 is undoubtedly destined to become one of the 10 most collectible small performance rides of the future. Competition success has always been a significant part of the Abarth story since Karl Abarth founded ?Abarth & C? over 60 years ago in 1949, and Abarth?s collaboration with the Fiat brand represents a 45 year history, resulting in six international records and nearly 900 individual race victories. 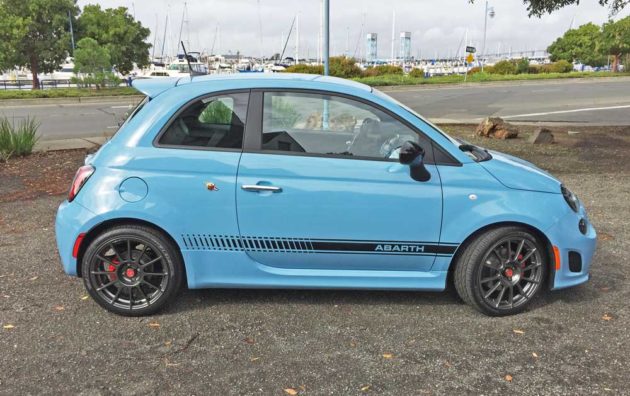 The original Fiat 500 (Cinquecento) made its first appearance more than 50 years ago on July 4th, 1957 in Turin, Italy. Nearly four million were produced between 1957 and 1975. The original displayed beautiful Italian styling blended with a timeless functionality, efficient design attributes and innovative technology. The original Fiat ?Nuova? 500 represented a catalyst in 1957 for the country of the ?poor, but beautiful? to be not quite as poor as before. Now, more than a half century since its debut, the 2012 Fiat 500 has returned with the same desirable qualities and appeal for a new generation of drivers as a 2012 model, delivering Italian-by-design functionality and value, with intelligently tailored efficiency for our market. 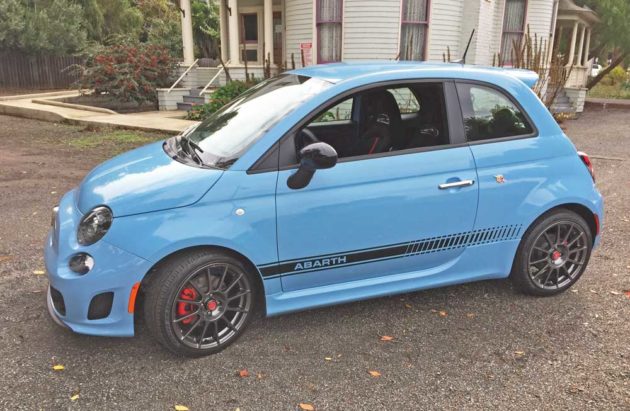 The base Fiat 500 models deliver safety, fuel economy, quality and advanced technological features, blended with iconic Italian style. The modern generation 500 closely resembles the original, displaying strong, unmistakable, early Fiat DNA. The original 500s were rear-engined vehicles, designed to carry four occupants. Today?s examples are still city-friendly, four passenger rides in an ?A? segment format, but feature a forward-mounted engine, in a larger, more comfortable package. This latest U.S. version is based on the globally popular Fiat 500, first launched in 2007, with over half a million sold in more than 80 countries around the world.

The Fiat 500 captures the original Cinquecento?s iconic allure in a smartly formatted no-nonsense design, artfully and harmoniously blended with technical, cultural and creative aspects. Overhangs are short and the bodyside consists of several superimposed layers, topped by a ?shell-like? roof. Up front, the signature ?whiskers and logo? face incorporates new projector headlamps and lower park lamps. The front fascia tapers outward toward the pronounced wheel arches, displaying a wide, road-holding stance. The upper portion of the fascia features a horizontal cooling duct, while the lower ?honeycomb? style grille integrates stylish fog lamps. Wheel arches are flared and the body-side A-line slopes from the clean clam-shell hood to fender cut. The sides are rounded and both head and taillamps are visible from the side. The 500?s iconic profile is finished off by the roof pillars and shadow-line window molding, forming a gentle continuous arc that also hides the door?s upper edges. In the rear, taillamps flank the rear-opening liftgate, with its rear window spanning the full width, cleaning meeting the ?C? pillars. 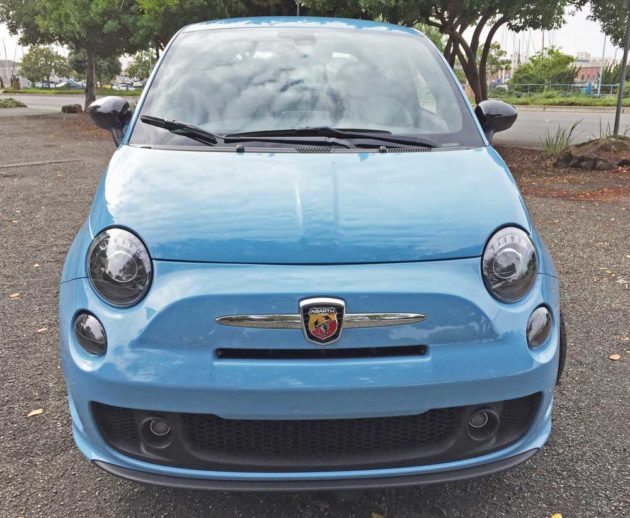 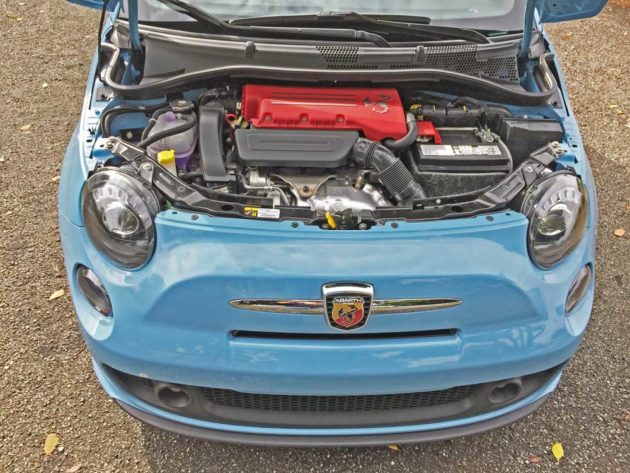 In terms of the Abarth model?s differentiation from other available Fiat 500 models, the front facia is noticeably more pronounced, extending 2.7-inches ahead of its signature ?whiskers and logo? face. The aerodynamics are better, at 0.367 and the engine bay features modifications that allow space for the 1.4-liter MultiAir? Turbo four-cylinder engine that makes 157 horsepower along with 183 pound feet of torque delivered to the front wheels via a five-speed, short throw, manual gearbox or an Aisen six-speed automatic Auto Stick with driver interactive manual control and electronically modulated torque converter clutch. Fiat?s MultiAir? technology allows the potent little four-banger to control air intake cylinder by cylinder and stroke by stroke with its electro-hydraulic system that comes without a fixed intake camshaft. Three wider air intakes and functional ?Abarth? shield allow for additional air into the engine compartment. Also up front, a blacked-out fascia accents integrated projector-beam fog lamps for a more aggressive persona. Twin ?nostril-like? openings are precisely placed on the front fascia maximizing airflow in and out of the engine?s two turbo intercoolers. 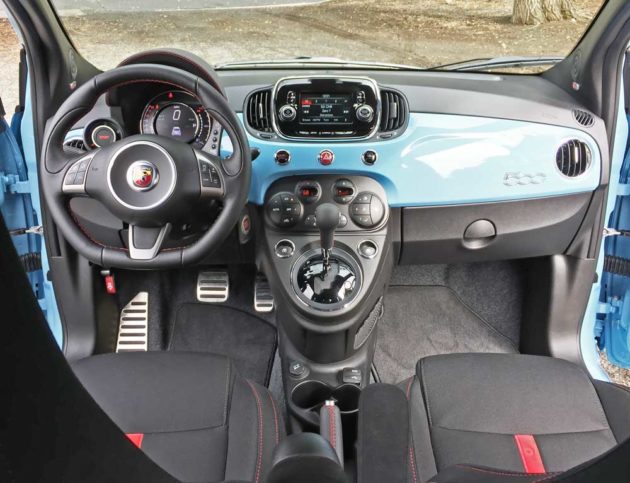 Abarth model interior styling and design cues remain as simple and appealing as those of the exterior, with controls logically positioned for easy and intuitive use. The gearshift is placed conveniently in the center stack. Features such as the concentric binnacle instrument cluster containing a 160-mph speedometer, tachometer and trip computer were inspired by the original 500. Portable Tom-Tom navigation is available that is removable, and plugs into the top of the dash, along with BLUE&ME Handsfree Communication. A flat-bottom sport steering wheel and sport front bucket seats along with an Abarth-designed leather shift knob and aluminum, rubber studded pedal covers highlight the car?s competitive aura. Seating options provided, include: Nero (Black) in cloth or leather; or Rosso (Red)/Nero in leather with contrast stitching. 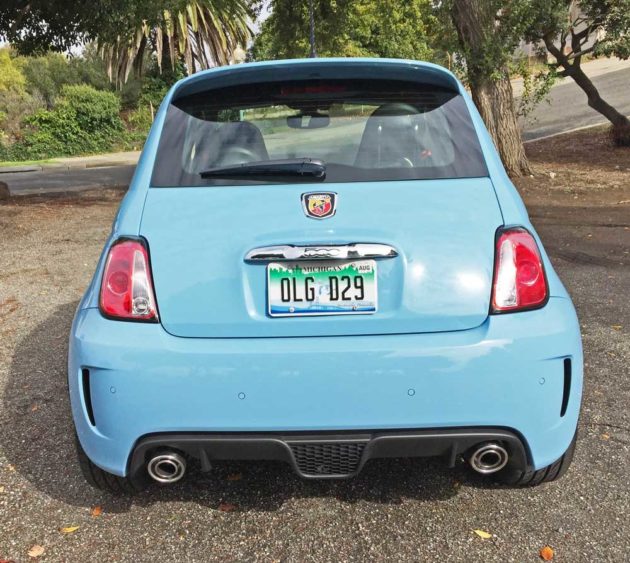 The chassis is precision tuned and features a unique MacPherson front suspension design with a 40 percent stiffer spring rate (the rear springs are 20 percent stiffer with strengthened supports and a 22 mm stabilizer bar), and a ride height that is 0.6 inches lower than other Fiat 500s. There are also Abarth-designed front lower control arms and an increase in negative camber to 1.5 degrees. Steering is quicker at 15.1:1 with Abarth-tuned electronic power steering calibration. Brembo brakes are larger with vented fronts and Abarth-specific semi-metallic brake linings and Rosso (Red) lacquered calipers fore and aft. A new dual-valve Frequency Selective Damping KONI? front shocks improve road-holding prowess. An Abarth-tuned electric stability control system provides a three-mode calibration to maximize on and off track handling characteristics with ?On?, ?Partial Off? or ?Full Off?. The ?Full Off? setting features Abarth?s innovative Torque Transfer Control system that maximizes throttle performance during on-throttle cornering (or throttle steering). 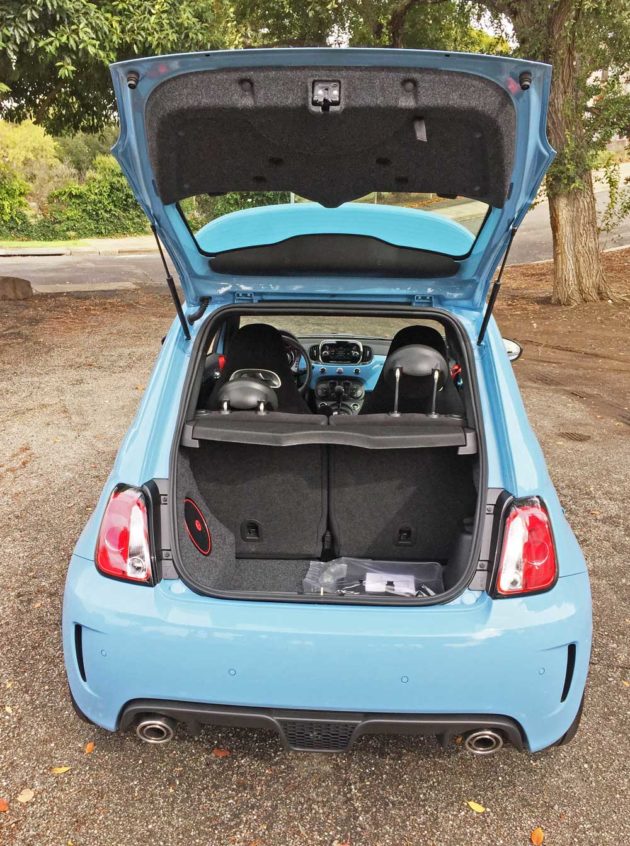 SUMMARY: Driving the 2016 Fiat 500 Abarth is unquestionably a ton of fun ? not unlike the raucous and pleasing exhaust note. The dash-mounted sport button improves throttle mapping and engine response, while normal operation is more like an ?Eco-mode?, that is not as responsive, nor is it as much fun. I tended to punch the Sport mode button and left it there, thoroughly enjoying the enhanced performance characteristics. 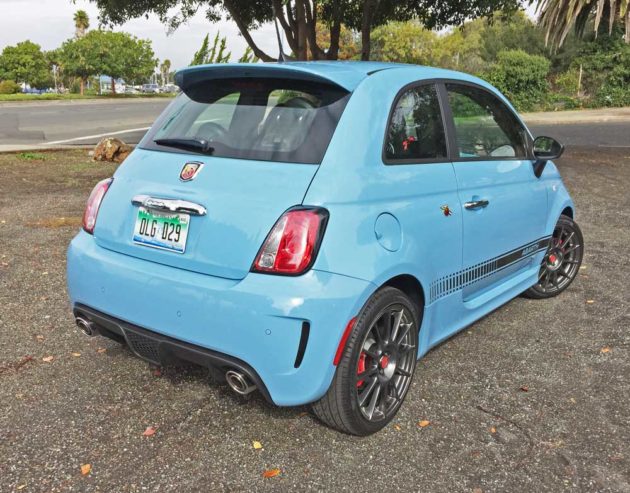 Acceleration of the Abarth model is noticeably quicker and more responsive, with the car only weighing roughly only 170 pounds more than regular Fiat 500s. The ride quality is obviously firmer than non-Abarth models, but is not unpleasant or objectionable. 2016 Fiat 500 Abarth and Abarth Cabrio models now feature Uconnect 5.0 system with 5-inch touchscreen radio, Bluetooth connectivity and integrated voice command 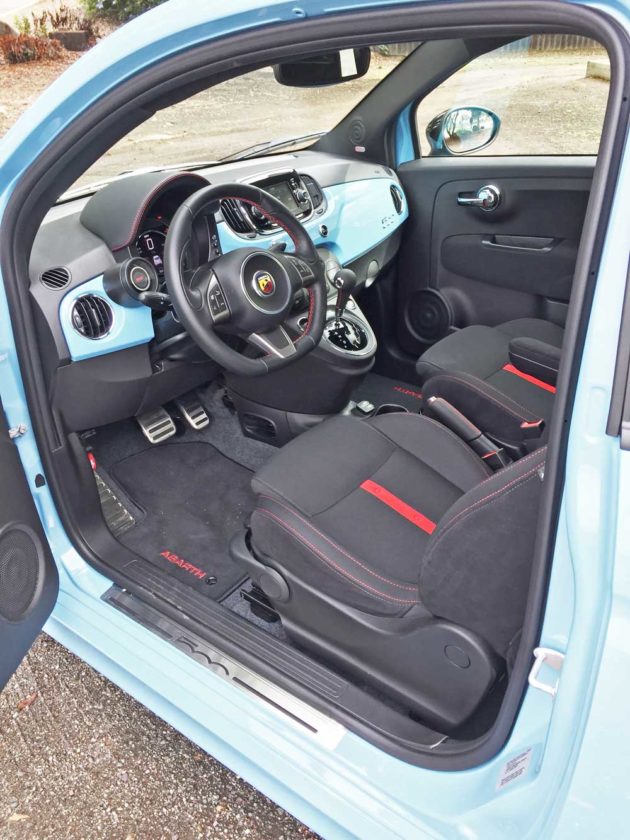 Rear seat room is still best left to small adults or children, particularly with larger front seat occupants. The rear seat backs fold down for added functionality and versatility, with a reasonable amount of room for personal gear with them up. 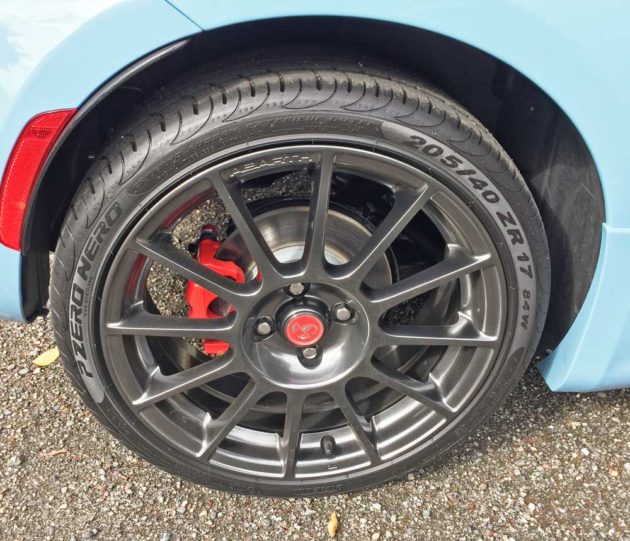 In the final analysis, the 2016 Fiat 500 Abarth delivers an immense amount of ?Bang for the Buck? on par with the MINI Cooper. 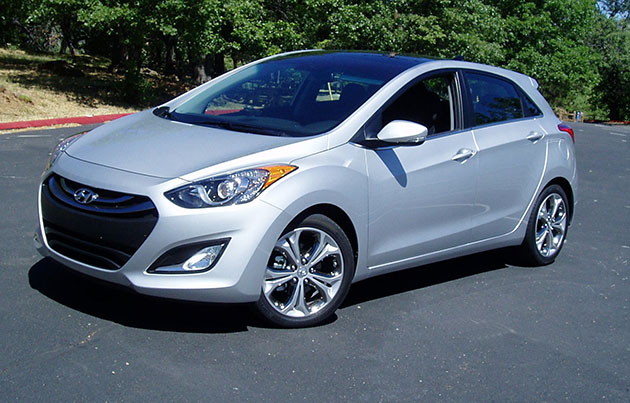