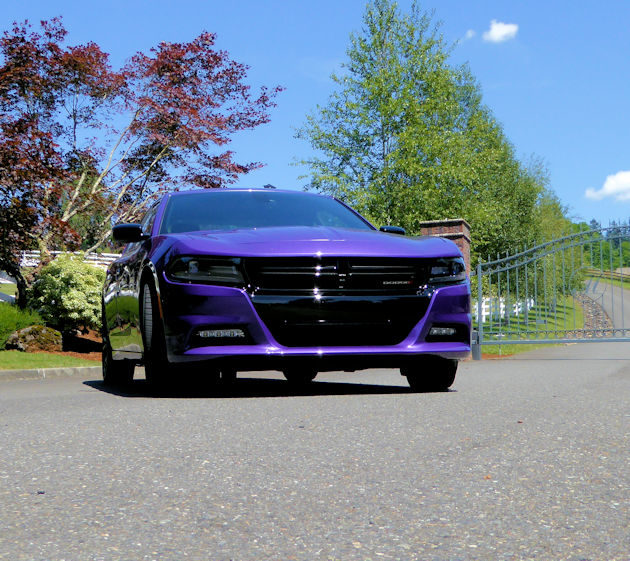 By its color alone, the Plum Crazy 2016 Dodge Charger R/T Blacktop commands attention. It?s not often we see a full-size sedan in such a bright plum/purple color, and this one borders on outrageous.

With or without a bright color the Dodge Charger has a muscular design which Dodge says was inspired by the iconic second generation Charger of the late 1960s. There is also the unmistakable Coke-bottle design on the profile line and scalloped body sides to add even more excitement to the style. 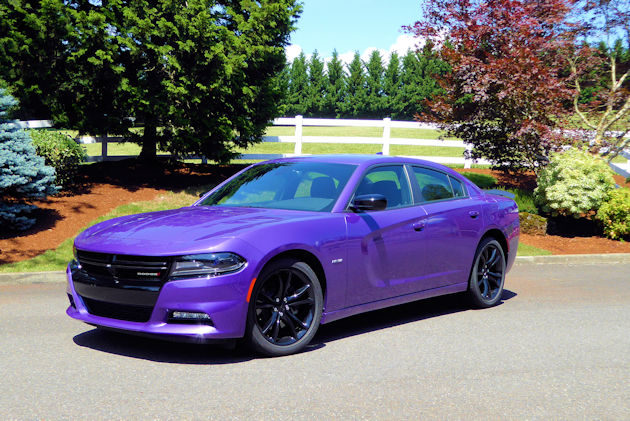 The Charger?s aggressive look is enhanced by wide fascias front and rear with LED daytime running lights and crosshair grille in the front and the signature ?racetrack? LED taillight that covers the entire width of the rear.

Our test car had the all-new Blacktop Appearance Group that took the design and Plumb Crazy color to a more custom look with a Gloss Black treatment on all the bright work and the split-crosshair grill, which together with the black headlight pods give it a mask-like appearance. The five-spoke Gloss Black aluminum 20×8-inch wheels, massive tires, and the black satin full-width spoiler completed the outlaw persona. 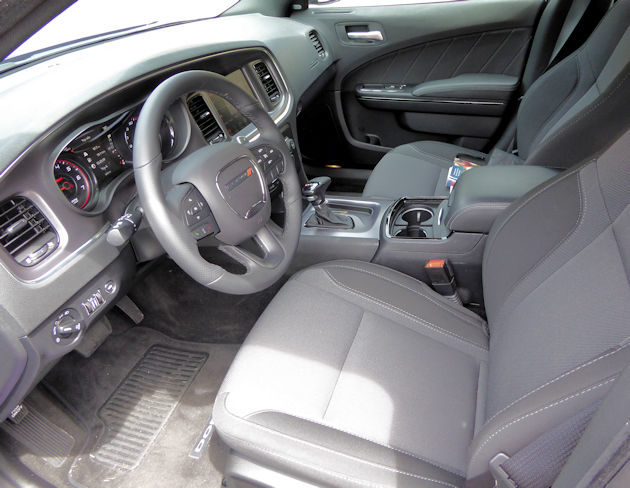 The interior Blacktop treatment is subtler with a few ?dark? appointments and a few painted accents. It?s available with a choice of premium cloth or perforated Nappa leather sport-contoured seats. The Blacktop treatment can be ordered with the 300-hp V-6 powered SXT or on the Hemi-powered R/T model, which was the Charger we tested. 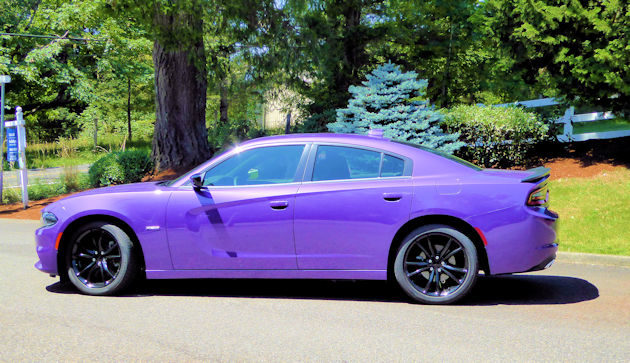 The appearance of this model is just one chapter of the Charger story — just as striking is the way this car performs. It?s very much like the spicy chili peppers that come in a range of hotness; the Dodge Charger, too, comes in a broad range of hotness from an impressive six-cylinder to the totally outrageous Hellcat Hemi V-8. 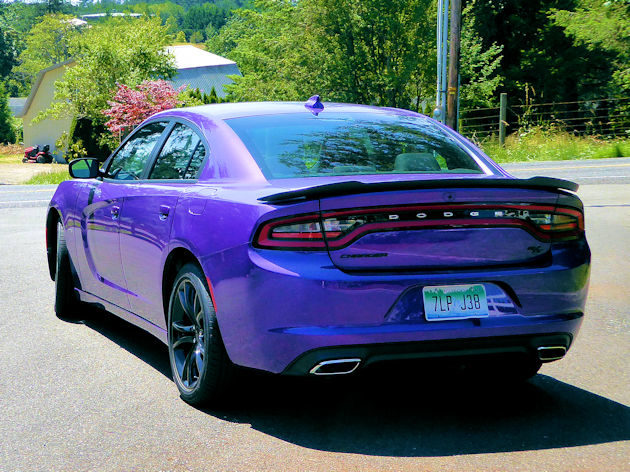 We can?t think of another large sedan that comes in so many model variations and engine choices. The engines range from a 292-hp V-6 and go up to the 707-hp Hellcat Hemi V-8 which makes the Charger the quickest, fastest and most powerful production sedan in the world. 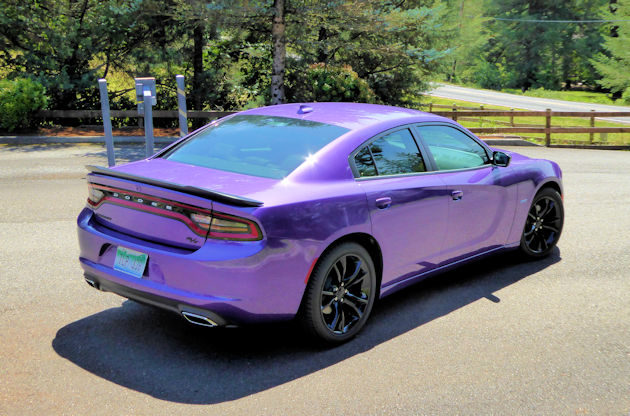 Our Plum Crazy Charger wasn?t the fastest, nor the second fastest of the Charger family, but it was more than quick enough for us. Under our Plum Crazy hood was a 370-hp 5.7-liter Hemi V-8 engine married to an eight-speed TorqueFlite? automatic transmission driving the rear wheels. The transmission has steering wheel-mounted paddle shifters. The engine is equipped with Fuel Saver technology that shuts off four of the eight cylinders to save fuel during periods of light loads, such as driving down a hill or flat road cruises. The engine has an EPA fuel economy rating of 16 mpg city, 25 mpg highway and 19 mpg combined. According to the trip computer, we averaged 21.2 mpg during a week of local driving which included a great deal of freeway time. This Charger accelerates from 0 to 60 mph in an impressive 5.1 seconds. 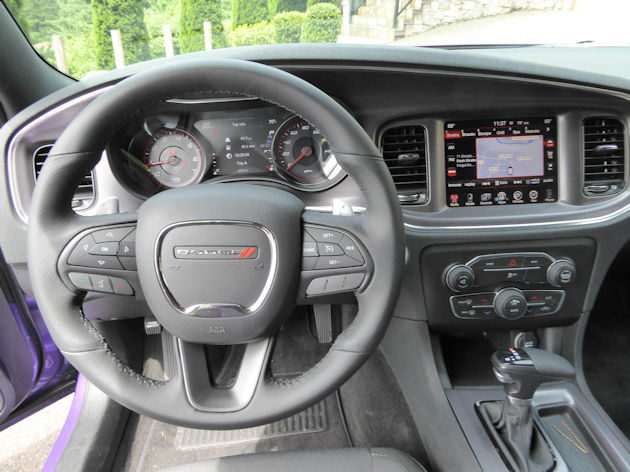 What make this car so remarkable is that it not only goes fast, but it also turns precisely, stops on the proverbial dime, stays flat on the corners and at the same time provides its occupants with a relatively quiet and comfortable ride. It?s unusual to have such a large sedan handling like it?s a little sport sedan. 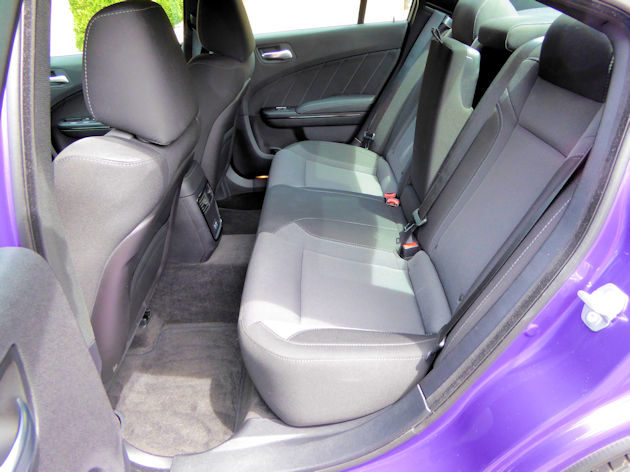 Dodge Charger performance isn?t limited to under the hood, the Dodge Uconnect infotainment systems is one of the best in the business. The 8.4-inch touch screen mounted at the top of the center stack has large icons, well-planned menus that don?t require diving to the center of the system to change radio stations and it?s all fast, just like the car. Touch an icon and the system instantly activates the command?no back ground music required for this wait time?it?s instant. The available entertainment systems are via BeatsAudio and Harman Kardon audio systems 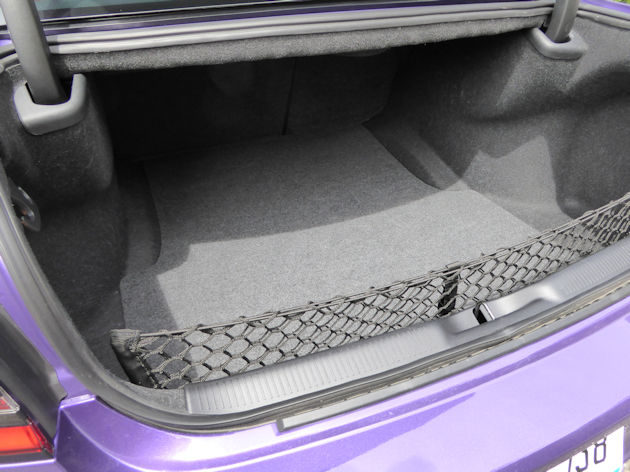 New for 2016, the Uconnect systems adds a Drag and Drop menu bar, Siri Eyes Free, and tailored to the specific car, so you don?t have to sort through features you don?t have or need. The manual is also upgradable over the Internet. Using the available mobile phone app, owners can start their vehicle and lock or unlock it. Wi-Fi is also available for the passengers using an access-on-demand feature which makes it a moving hot spot. 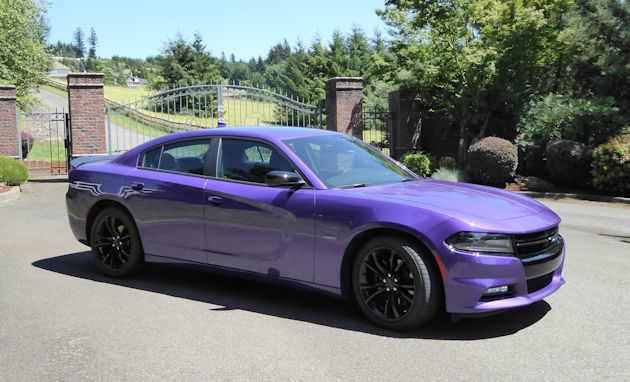 The Dodge Charger is offered in nine key models: SE, SE AWD, SXT, SXT AWD, R/T, R/T Road & Track, R/T Scat Pack, SRT 392 and SRT Hellcat. The pricing ranges from $28,990, including the destination charge, for the rear-wheel drive SE. The SE and SXT, which are powered by the V-6 engine, are both available with all-wheel drive as a $2,250 option. Our test car, the R/T with 5.7-liter Hemi engine had a base price of $34,890 and $36,380 with the Blacktop Appearance Group and Navigation options. 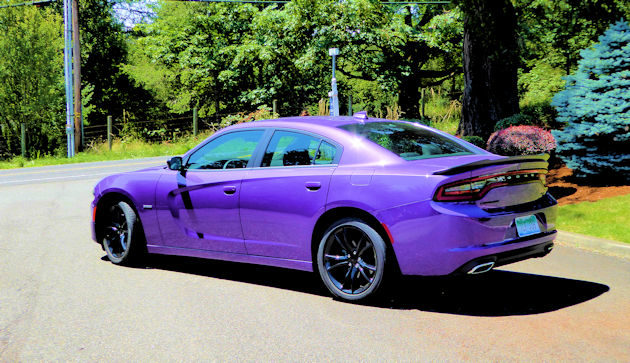 The Dodge Charger Hellcat with its 707-hp 6.2-liter Supercharged Hemi V-8, which we understand is still hard to find, has a base price of $66,940, and can go as high as $76,510 when ordered with all the available options.

The 2016 Dodge Charger is a very impressive sport sedan. It looks great, even in a color like Plum Crazy, its fun to drive and a comfortable car to ride in. If you are looking for a roomy car with lots of performance, some version of the Charger will likely appeal to you. To read more about the wide range of Dodge Chargers, go on the Internet to http://www.dodge.com/en/charger/ . 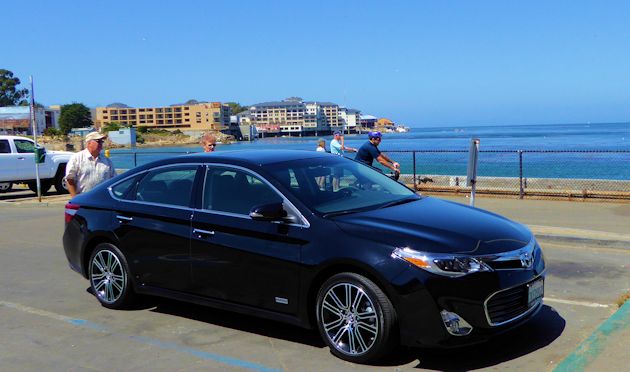 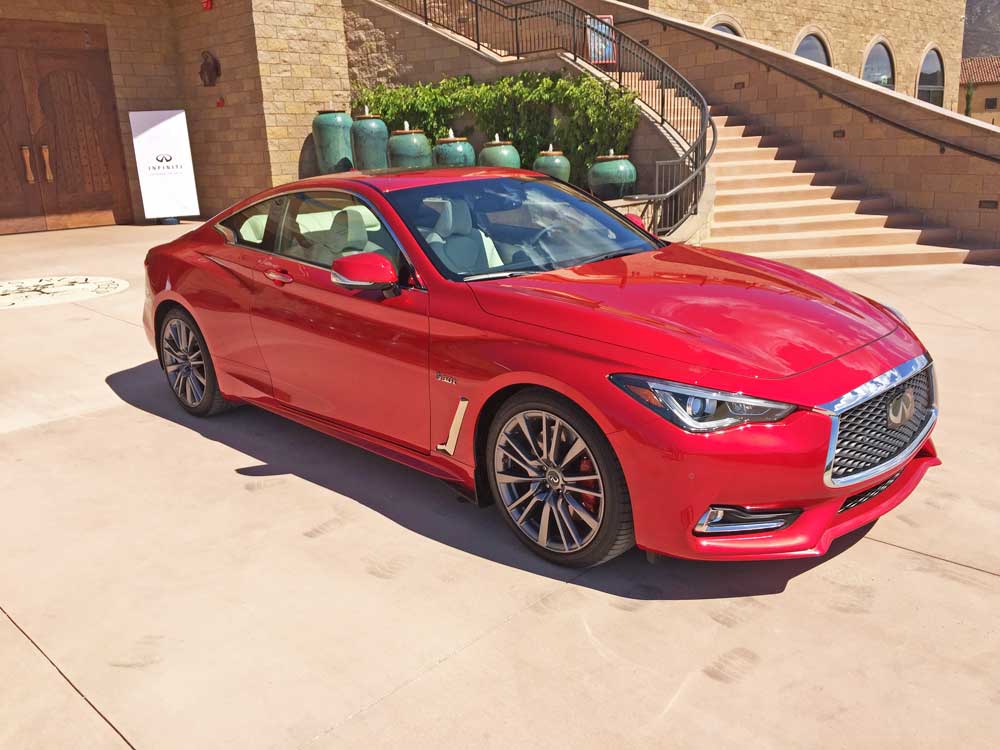