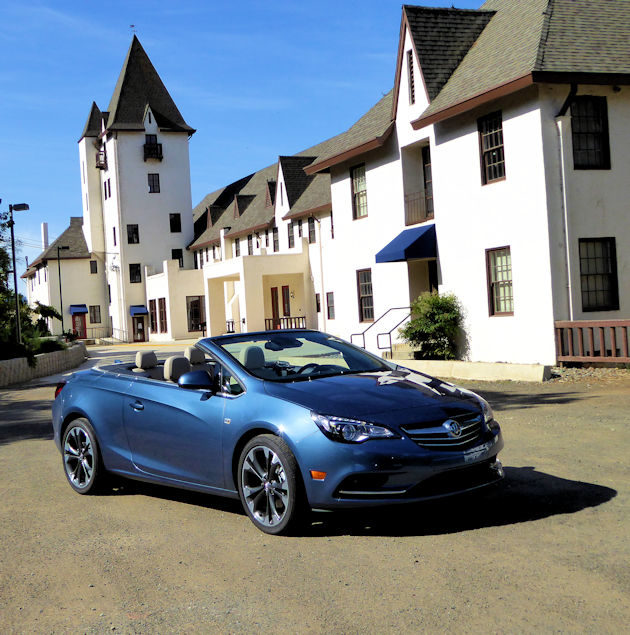 Washington to California ? Several times a year we set aside some time for a road trip. We never seem to lose our love for the open road and a chance to get away for a few days. It?s also a good chance to get to know a car more intimately.

The subject of our most recent road trip was the 2016 Buick Cascada convertible on a trip from our home in Washougal, Wash. to Nice, Calif. on the shores of Clear Lake — about 50 miles northeast of California?s Napa Valley. We planned to meet relatives at a timeshare we have on the lake and spend a couple of days visiting. 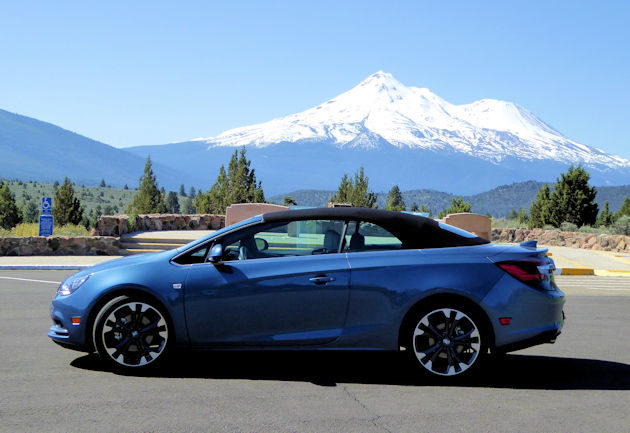 Our normal road trip itineraries include and early start, driving five- or six-hundred miles in a day while listening to audio books. We varied our routine this time and took a route over Mount Hood and the Cascade mountains to Central Oregon and south on Highway 97 stopping for the night in Klamath Falls. The appeal was to get off Interstate 5 through Oregon, enjoy the sights and spend some time with the convertible top down and fight less truck traffic. 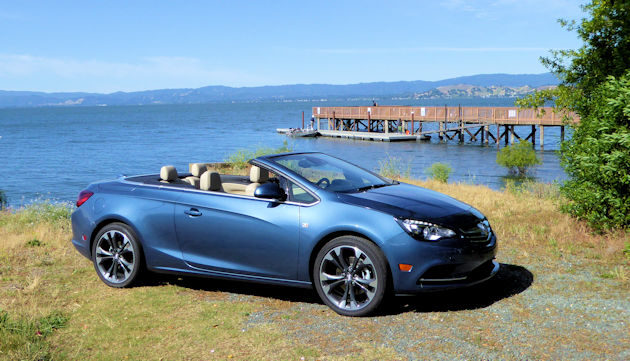 The Cascada is the first Buick convertible produced since Buick built a small number of Reatta Convertibles in 1990 and 1991. We have a special interest in the Reatta because we own a 1990 Reatta Coupe. The hand-built two-seat Reatta was only produced for four years with a total production of only 21,715 cars (2,437 convertibles). 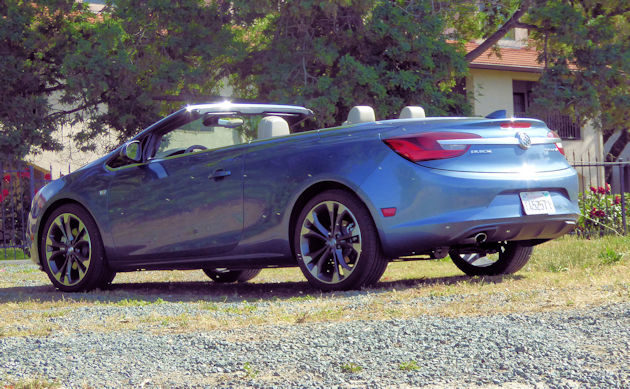 The Cascada was designed to be a convertible — it?s not a coupe with the top cut off. As such, the design flows gracefully from the Buick grille and signature wing-like daytime running lights and sleek HID headlights over the sloping hood to the fast-raked A-pillars. Forward sloping sides add to the impression of motion. The large 20-inch standard wheels and tires add to the aggressive look. By building it as a convertible they were also able to build in a stronger, more rigid body structure. This was obvious by the complete lack of the cowl shake or the twisting and shaking often experienced convertibles.

?The Cascada?s design blends the suggestion of speed with sophisticated and uncompromising details,? said Holt Ware, Buick exterior design director. ?Most convertibles are designed from existing coupes or sedans, meaning stowage of the top is an afterthought, but not this Buick. It looks handsome and has a premium appearance when the top is lowered ? and a perfect, seamless profile when it?s up.?

A 200-hp 1.6-liter turbocharged four-cylinder engine drives the Cascada?s front tires through a six-speed automatic transmission. It?s a sophisticated little engine with direct injection and variable valve timing. For this type of car, the acceleration is good; it makes a 0 to 60 mph run in 8.3 seconds according to buff magazine testing. Passing power was adequate, but did require plenty of room. The EPA estimates fuel economy at 20 mpg city, 27 mpg highway and 23 mpg combined. We actually averaged 28.4 mpg on our trip driving at about five mph over the posted speed limits. 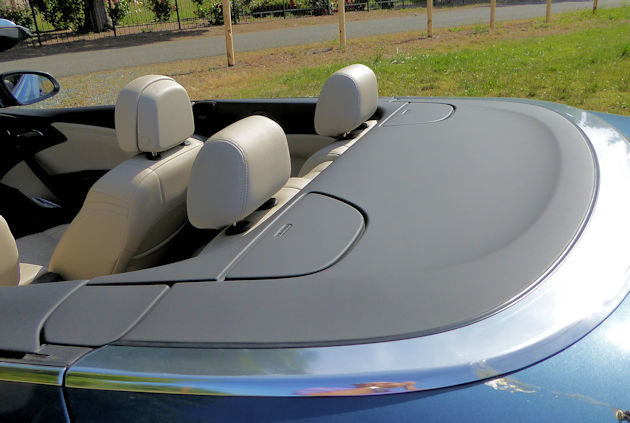 With the cloth top up the Cascada takes the persona of a coupe. Push the chrome horseshoe-shaped switch on the center console and 17 seconds later the top is folded neatly under the tonneau cover behind the rear seat back. The top can be lowered and raised while the Cascada is still moving at speeds up to 31 mpg. Inside, the lined top is one of the best we?ve seen providing not only a coupe-like sound level with the top up, but a nicely finished headliner. 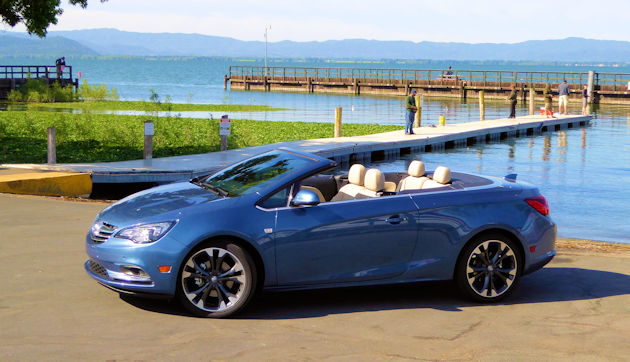 With the top down, and the available diffuser in place over the rear seat, the wind noise and buffeting is minimal so we could still listen to Siriusly Sinatra on the SiriusXM satellite radio, but listening to an audio book turned out to be a little more difficult, so we deferred the books to when we had the top up. 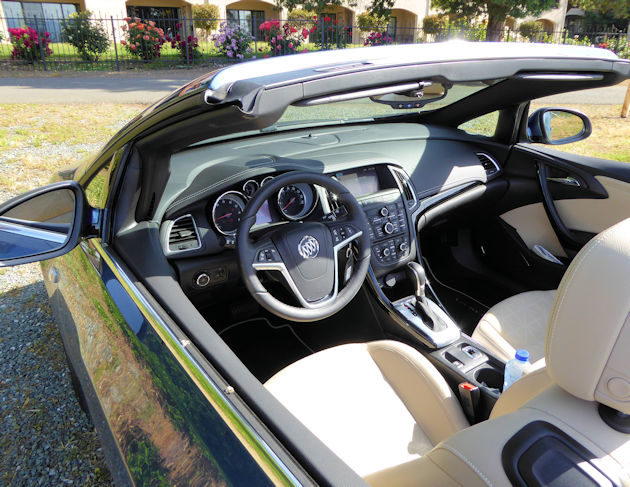 The leather seating is soft, supportive and proved to be quite comfortable even during the extended drive time. The leather on the seats is treated to reflect the sun?s rays and therefore stays cooler when left out with the top down. We give the Cascada high marks for having standard heated front seats, heated steering wheel and a nice seatbelt presenter that pushes out of the seat belt bracket to make the belt much easier to grab. 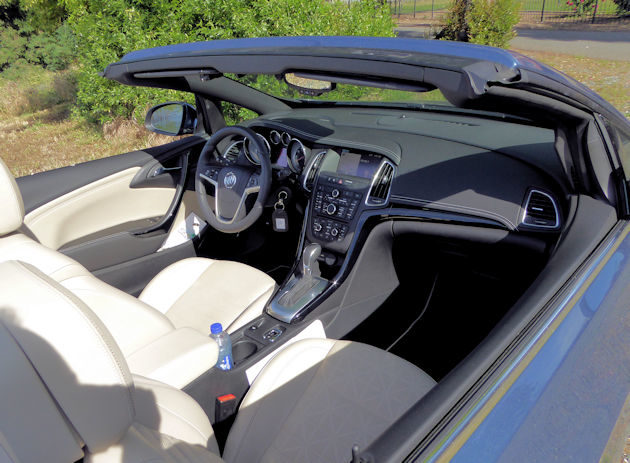 We disagreed about the controls. Barbara thought the large number of buttons and knobs high up on the center stack were somewhat confusing and cluttered. Bill thought grouping them tightly made them easier to use. We both like the larger, faster IntelliLink touch screen but thought it was tucked too far into the dash making it more difficult to use. The navigation and infotainment system does include the OnStar communications system along a 4G LTE connectivity with Wi-Fi hotspot so that all the passengers can connect devices to the Internet. 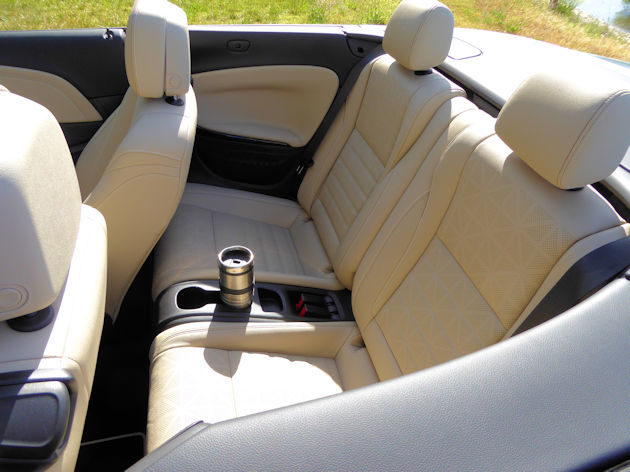 The instrument panel with analog tachometer and speedometer on both sides of the digital display are very well placed and easy to see.
With the top down the cargo area is still fairly roomy for a convertible with 9.8 cubic feet of space. When the top is up the space grows to 13.4 cubic feet, and the rear seatback can be folded exposing a 22.4- x 12.6-inch pass-through for carrying longer items like golf clubs, skis or wakeboards. The Cascada has 2+2 seating which means a couple of adults would have a ?cozy? ride in the rear seat. Actually it?s much better suited for carrying stuff, but because it has a rear seat the insurance usually costs less. Buick engineers have designed a very helpful access system which automatically moves the front seat forward to make it easier to climb into the back, especially when the top is down. 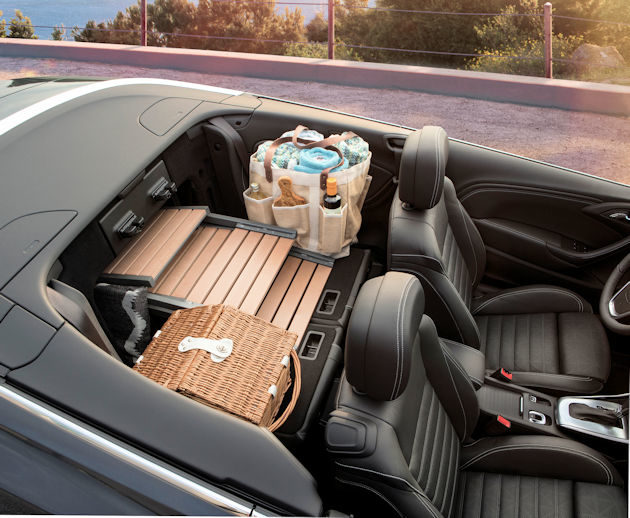 Included with all the tradition Buick safety equipment are automated, spring-loaded and pyrotechnically activated rollover bars behind the rear seat. The bars shoot up to help protect the occupants in the event of a perceived rollover. 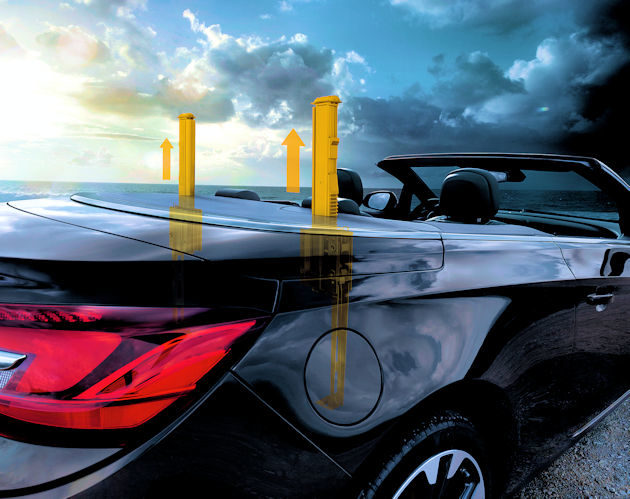 The 2016 Buick Cascada is great looking, comfortable for long trips and even economical. From a personal standpoint, as much as we like the car, we feel it lacks a few features — blind spot warning, active cruise control and push button start ? that we think a car in this category should have. 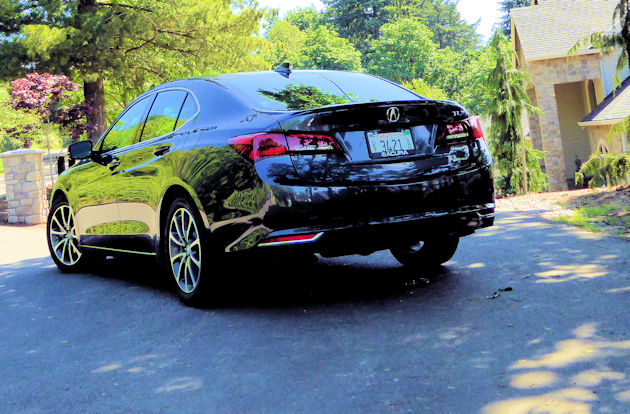 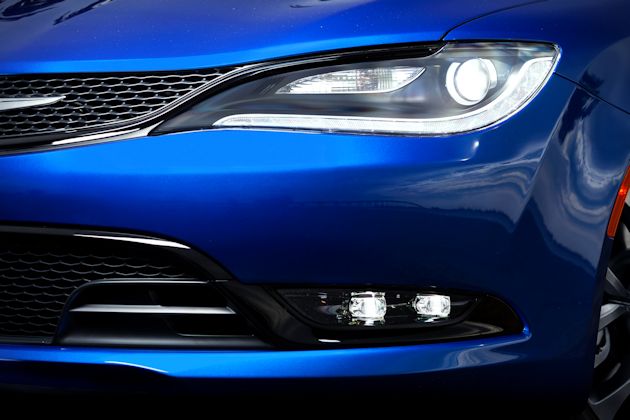