?2016 Buick Cascada Convertible?
The first Buick Ragtop since the Reatta 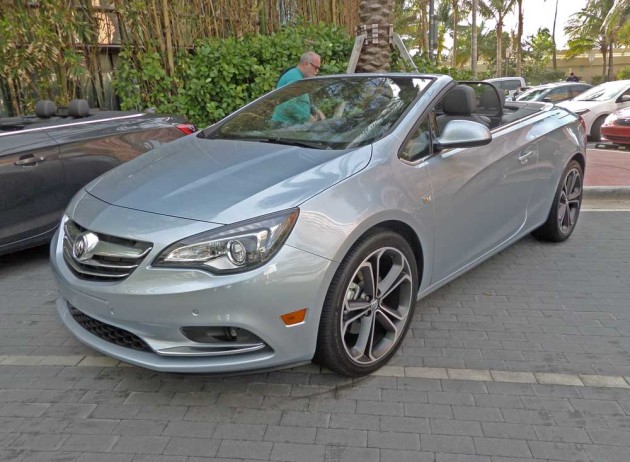 Miami to Key West, FL, – It has been 25 years since Buick offered a convertible model in their lineup. The Buick Reatta convertible was the last, and appeared for only two years (1990 and 1991) ending as a 3.8-liter, 170 horsepower V6-powered, Front-Wheel drive, two-door, two-seater. Now there?s a new convertible making its debut on our shores ? the globally developed 2016 Buick Cascada, which marks the return of top-down luxury for the Buick nameplate. The Cascada (pronounced Cas-Kah-Dah) is built in Gliwice, Poland on GM?s Delta platform, which is shared with Chevy Cruz, Buick Verano and Opel. 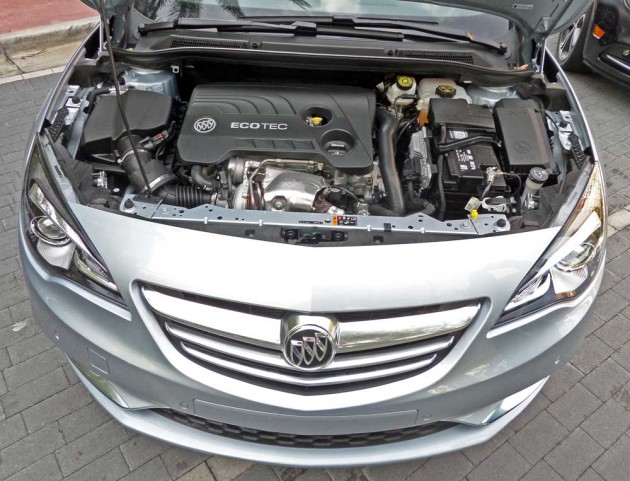 The two-door Cascada comes in a 2+2 seating configuration accommodating four adults as a FWD vehicle, and it?s powered by a 1.6-liter, DOHC, 16-valve, turbocharged inline four-cylinder engine with Direct Injection and Variable Valve Timing, that makes 200 horsepower (more than 100 horsepower per liter), while also developing 206 pound feet of torque, with an overboost feature that briefly pushes torque to an estimated 221 lb-ft. The engine mates to a six-speed automatic transmission. EPA fuel economy ratings are: 20-mpg city and 27-mpg highway. 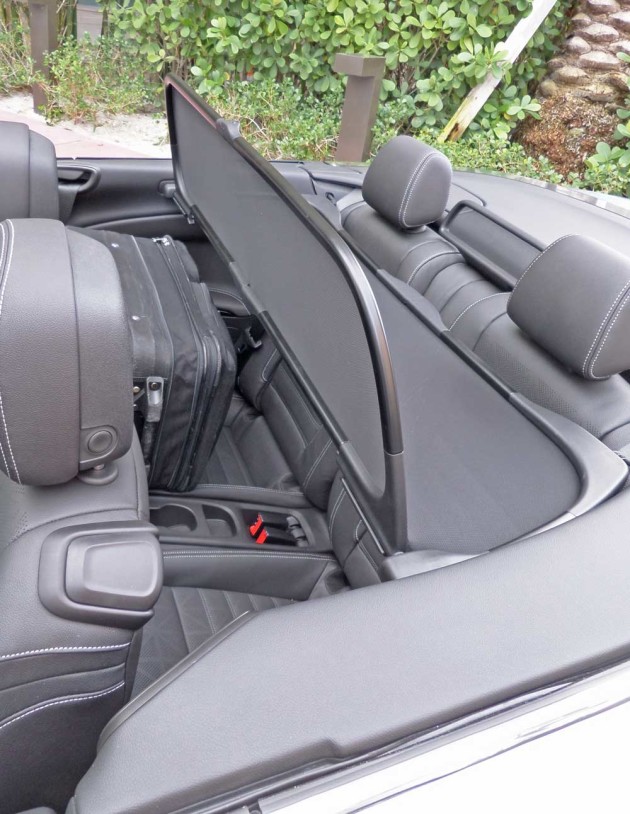 The insulated soft-top system opens in 17 seconds at speeds up to 31 mph. When lowered, the top folds neatly and completely beneath a hard tonneau cover behind the rear seats, and there are Rollover protection bars that deploy behind the rear seats when a possible rollover is detected. The rear deck lid opens rearward to accommodate the folding softtop, and the electro-hydraulic power roof system features a multilayer construction with acoustic and thermal barriers ? allowing for a comfortable ride in varying conditions. 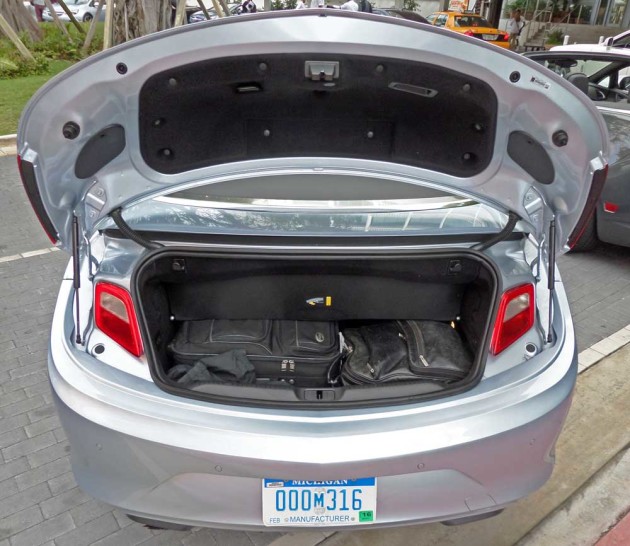 Storage space is plentiful with room for weekend getaway gear. Trunk cargo space measures 13.4 cubic feet of room with the top up and 9.8 cubic feet with the top down. Rear seatbacks fold down electronically expanding cargo capability for longer items.

The Cascada was designed as a convertible from the outset and displays a smooth flowing sculpted profile with sharply raked ?A?-pillars and sweeping upper and lower body-side character lines, along with aerodynamic headlamps that blend gracefully into the front fenders. LED daytime running lights deliver Buick?s distinctive wing-shape signature look, and aft is a chrome trim strip with s central Buick logo that bridges between the LED illuminated wing-shaped taillights. Redundant taillights are mounted inside the trunk lid for nighttime safety when the trunk lid is raised, performing all normal taillight functions except reverse lights. There are two trim levels: 1SV and Premium 1SP. Currently , there are only 6 exterior colors and two interior color schemes available. 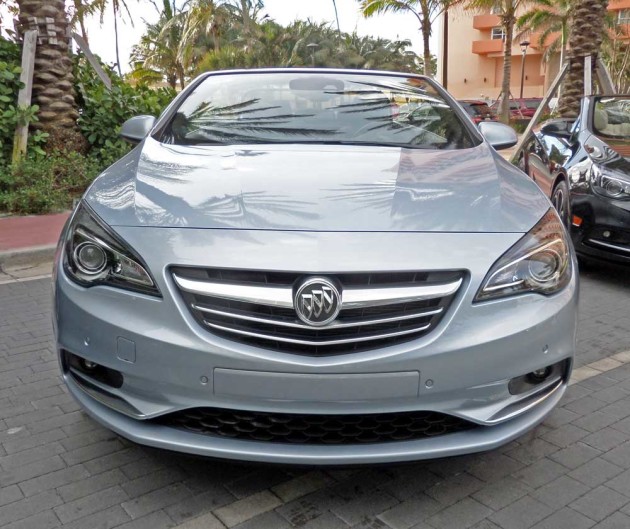 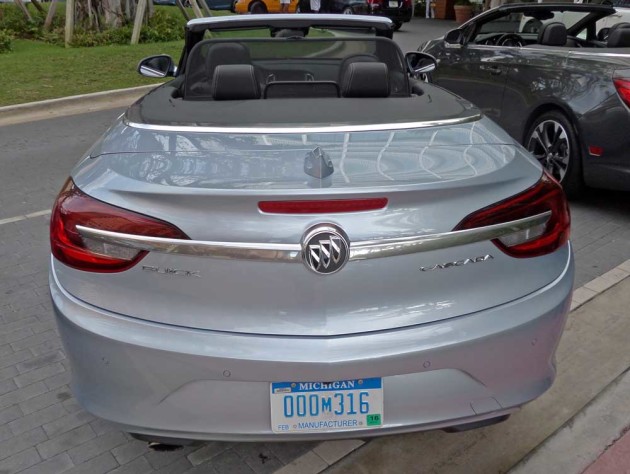 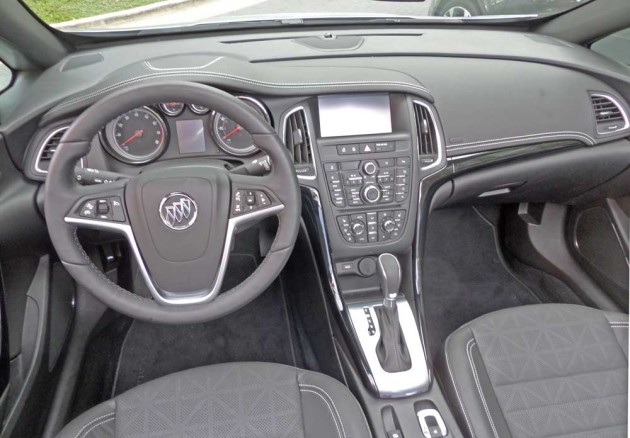 In the interest of bringing the Buick Cascada convertible to market more quickly, there are some advanced safety and driver-assistive technologies that many consumers find desirable and some even feel are that are absolutely necessary, which were not included in initial launch models ? features such as Blind Spot Monitor, Collision Mitigation Braking System with Forward Collision Warning, Lane Keeping Assist and Adaptive Cruise Control with a Low Speed Follow function. The Opel convertible version incorporates laser technology, and domestic GM engineers felt that radar based systems for those features are infinitely more effective and efficient. That reasoning, along with cost considerations was considered to be less important than bringing the Cascada to market in a timely manner. 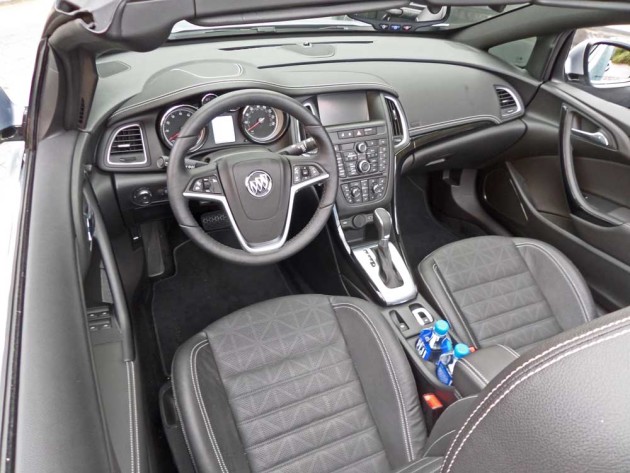 My test 2016 Buick Cascada was in 1SP Premium trim, sporting a Flip Chip Silver metallic exterior finish, which exhibited a Blue cast. The interior was executed in Jet Black with Jet Black trim accents. The base price was set at $36,065, which rose to $37,385 after factoring in the metallic paint finish ($395.00- the only option) and the Destination charge of $925. My more recent, longer term test Cascada also came in Premium 1SP trim with a Toasted Coconut exterior finish and a Light Neutral interior with Jet Black trim accents. Its pricing structure was the same as the vehicle tested at the launch program.

SUMMARY: The 2016 Buick Cascada convertible is a far cry above the Buick Reatta convertible that went away 25 years ago. It is a delight to drive with the wind in your hair and in your face. The power delivery is smooth and linear with no noticeable turbo lag, and the ride quality is firm enough to ensure a desirable level of stability across the broad torque range. 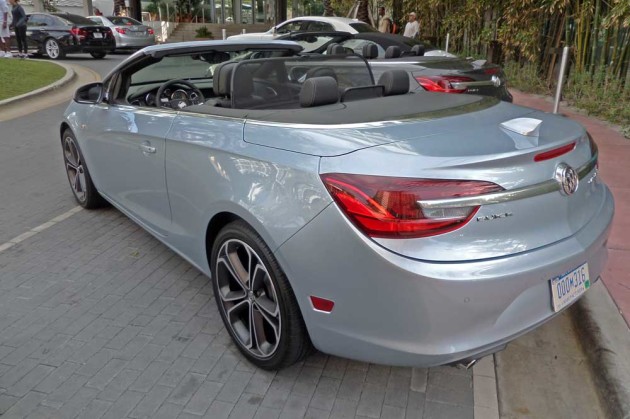 The euro flavored Cascada is easy on the eyes, projecting a sleek, powerful and aerodynamic form from virtually every viewing angle. The front and rear fascias are gracefully molded below the grille and deck lid, the latter incorporating a sculpted and integrated spoiler lip. The hood features a central raised spline that runs from the sharply raked windscreen flanked by two supplemental character accents to the top of the grille opening. Functional horizontal front scoops give the frontal image a bold athletic persona. A bright trim molding surrounds the entire cabin area from the windshield header, and down the ?A? pillars in a continual loop at the beltline adding a classy touch. The Cascada?s profile displays a forward sloped wedge. 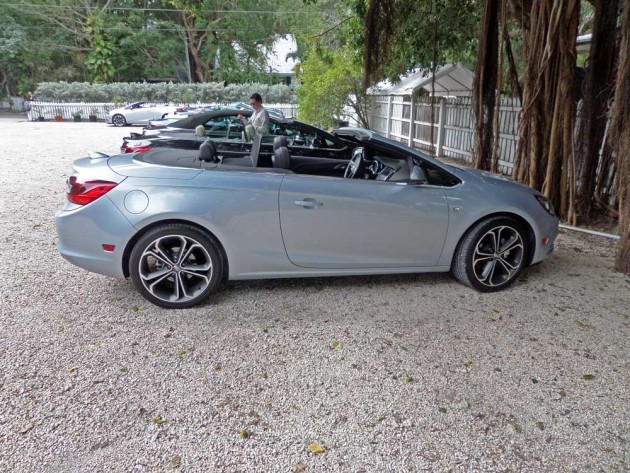 Since the car was designed as a convertible from the outset rather than from a chopped coupe it is equally attractive with the top up or down. Pronounced wheel well arches fit closely over the 20-inch wheels and tires. 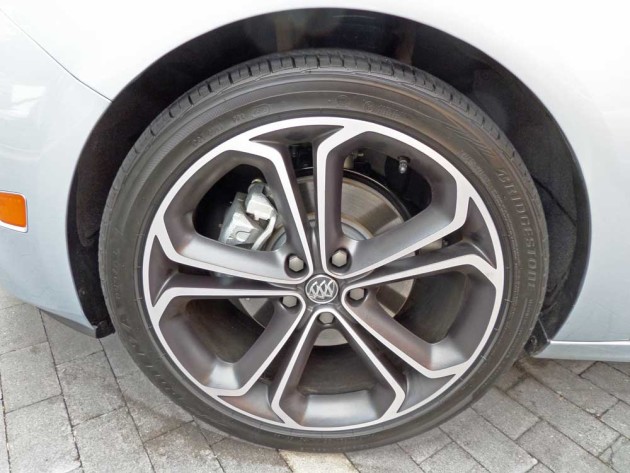 Carrying on a normal conversation with the top down is made possible by the wind deflector that mounts above the rear seat, as buffeting is held to a minimum. 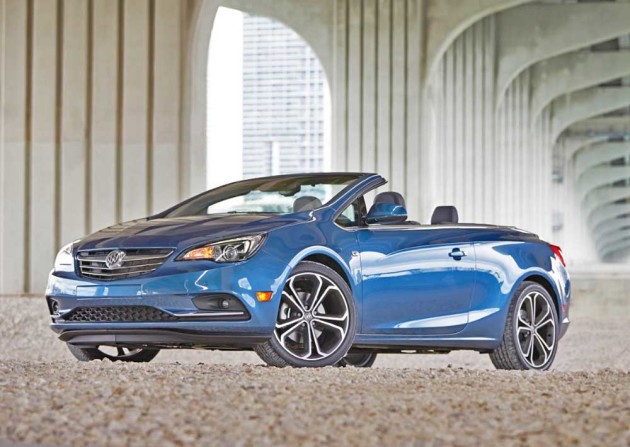 In the final analysis, the 2016 Buick Cascada drop top fills a long vacant gap in Buick?s vehicle portfolio that should appeal to a new and more youthful audience, and it is genuinely affordable, especially given its feature content ? it certainly is no longer a ride for only the elderly ? a stigma that Buick was cursed with for many years. Shortcomings include: limited rear vision thru back window with the top up and the ignition key location for long-legged drivers. A plus is the seat belt presenter. 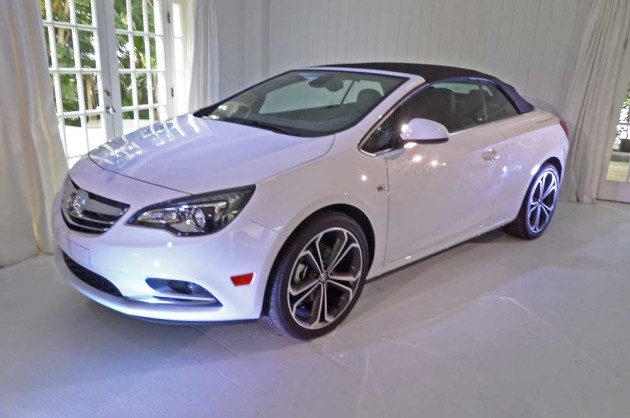 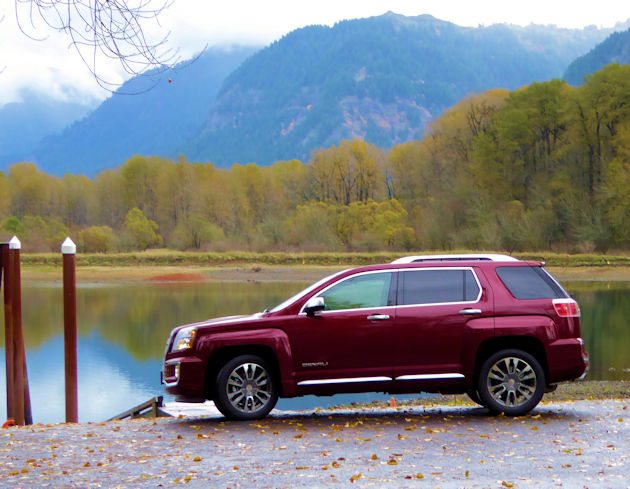 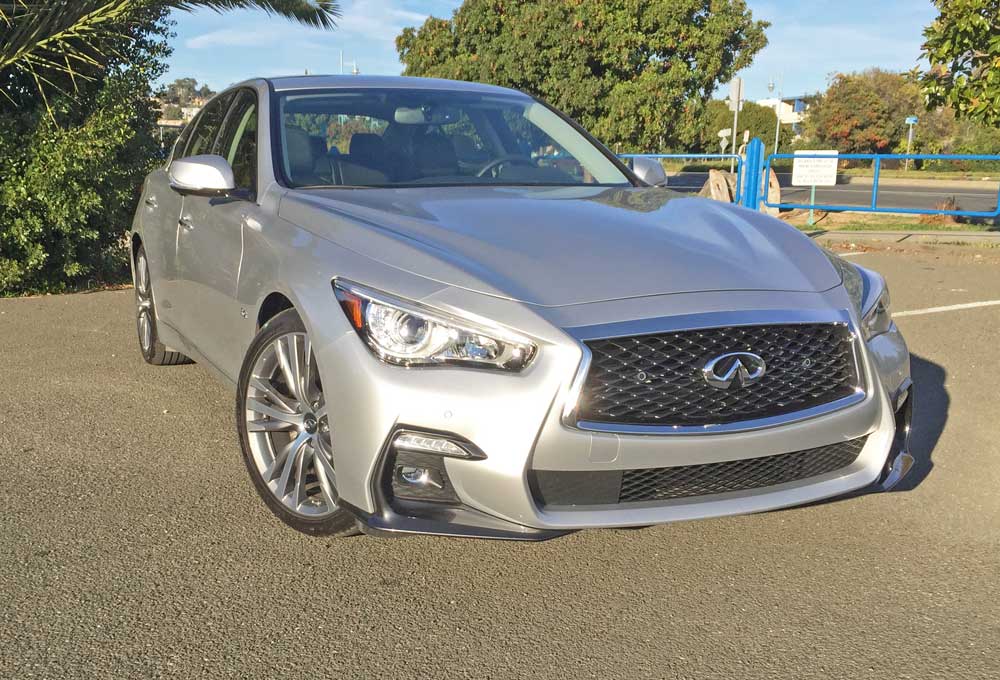