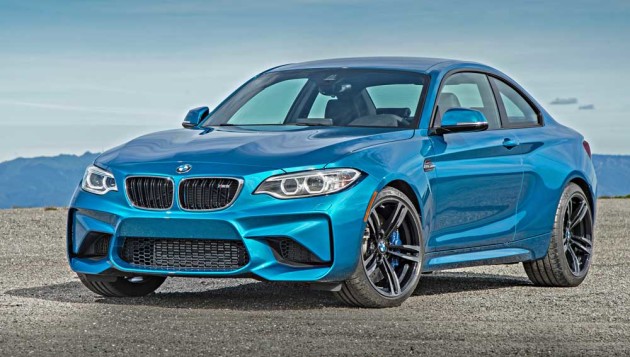 I currently have a 1972 BMW 2002 and have owned it for more than 20 years and love it even though it?s not a TII model. The introduction of the 2002 Bimmer launched the concept of a sub-compact yet powerful, rear-wheel drive sports coupe engineered and built with German precision. So, when that iconic concept of driving pleasure was perpetuated with the premiere of the all-new 2014 BMW 2-Series Coupe lineup, it was only natural that I immediately referred to it as a modern replacement for the 2002. Now, there’s ?a BMW M2 Coupe for 2016. 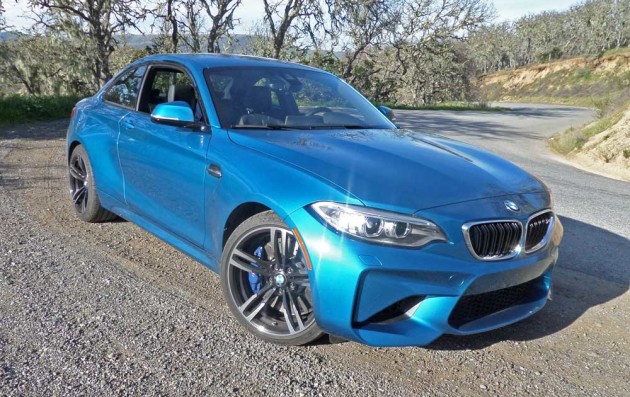 The 2014 model 2-Series sub-compact sports coupe was the latest to emerge from Bayerische Motoren Werke AG, replacing the BMW 1-Series Coupe here in the U.S. marketplace. The 1-Series Coupe had established a standout position among its class rivals with its rear-wheel drive concept and potent engines featuring BMW TwinPower Turbo technology, blended with a fetching premium aura. 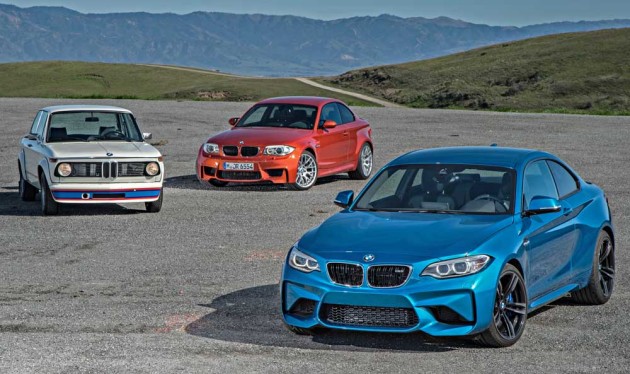 The 2014 BMW 2-Series Coupe raised the bar in the premium sub-compact segment in terms of its dynamic driving ability, aesthetic and emotional appeal. It represented a distinctive vehicle concept unique in its segment, with a typical BMW Coupe two-door body in a classic three-box design, with seating for four, rear-wheel drive, a pair of engines and chassis set-up with the focus squarely on sporting ability. 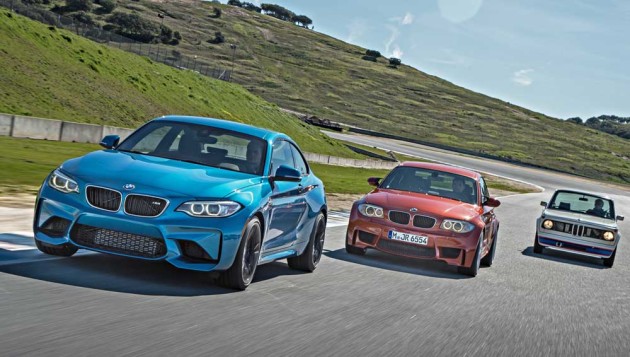 It naturally became instantly comparable with the original BMW 2002 in terms of spirit and concept. I was immediately criticized by many for making that analogy, with naysayers pointing out that there would never be another 2002, which is not exactly true, as it is entirely possible to completely recreate a brand new 2002 from the ground up from NOS available parts.

As with the original 2002, the BMW 2-Series Coupe raised the bar in the premium sub-compact segment in terms of its dynamic driving ability, aesthetic l and emotional appeal, representing a distinctive vehicle concept unique in its segment.

The newly designed BMW 2-Series Coupe featured significantly larger dimensions than its predecessor, the BMW 1 Series Coupe, and was offered at a Manufacturer?s Suggested Retail Price of $33,025 for the 228i and $44,025 for the BMW M Performance M235i, including $925 destination and handling. The BMW 228i Coupe was the first sub-compact BMW model to be powered by the 240 hp version of the 2.0-liter four-cylinder engine, which also developed 255 pound feet of torque. The BMW M235i, at the time, was the most powerful gasoline-driven BMW M Performance automobile, with its motive force delivered by a unique M Performance 3.0-liter inline six-cylinder with TwinPower Turbo technology (twin-scroll turbocharger, High Precision Direct Injection, Valvetronic, Double-VANOS) that cranked out 320 horses in a range from 5,800-6,000 rpm, while generating 330 lb-ft of torque from 1,300-4,500 rpm. The M235i also featured M-specific chassis tuning, which, for the U.S. included standard M Adaptive suspension, M Sport Braking system, variable sport steering and Michelin Pilot Super Sports tires. The exhaust was even specifically tuned for the M235i.

Both models were available with either a 6-speed manual gearbox or an 8-speed automatic transmission, with the M235i offering a Sport version. The M235i was capable of accelerating from 0-60 mph in 4.8 seconds with the 8-speed Sport automatic and a top speed of 155 mph. 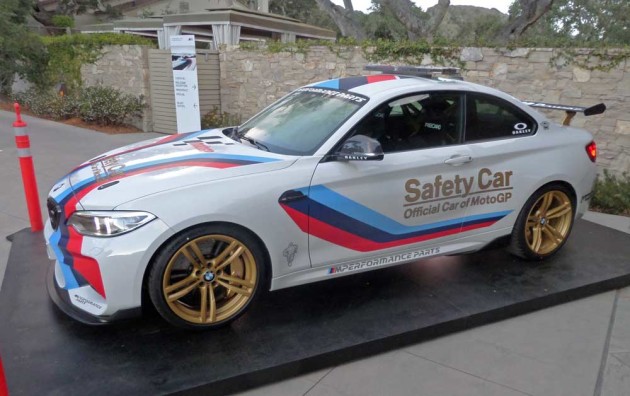 The 2014 BMW M235i instantly became my favorite new Bimmer coupe. That was then, and now there is yet another M Coupe that surpasses it ? the 2016 BMW M2 Coupe, which has also been designated as the official Moto GP Safety Car. This new coupe represents an even further extended 2002 evolution. 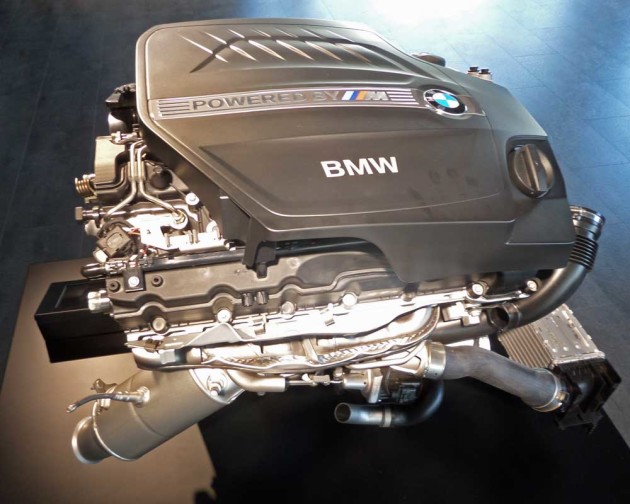 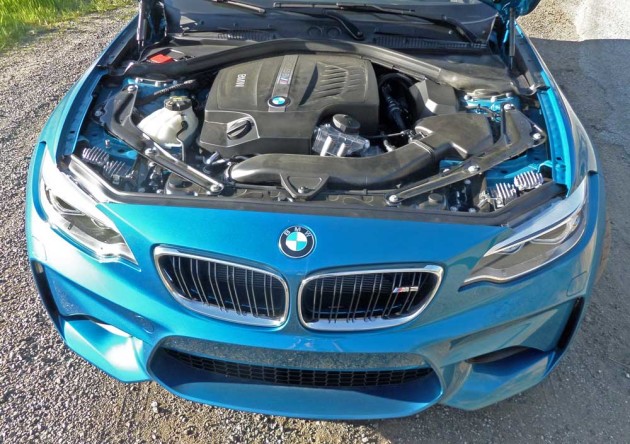 The new BMW M2 is also powered by a 3.0-liter, DOHC, 24-valve inline 6-cylinder with M TwinPower Turbo technology, TwinScroll turbocharger, High Precision Injection, VALVETRONIC fully variable Valve lift control and Double-VANOS variable camshaft timing, but it cranks out 45 more horses at 6,500 rpm for a total of 365, along with 13 additional pound feet of torque in a range from 1,400 to 5,560 rpm for a total of 343 (369 with overboost).

Transmission choices for the new M2 Coupe include a 6-speed manual gearbox that features automatic rev-matching, or a 7-speed Double Clutch automatic with Drivelogic. 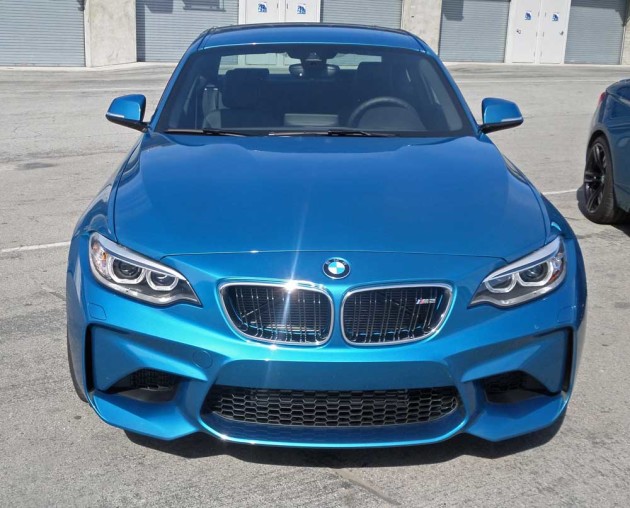 The new BMW M2 Coupe displays a sporting presence and athletic agility combined with an evocative and emotional exterior design, displaying an impressive amount of power and athletic stance with bold design elements on the one hand, along with a focus on sporting achievement and credible everyday practicality on the other. 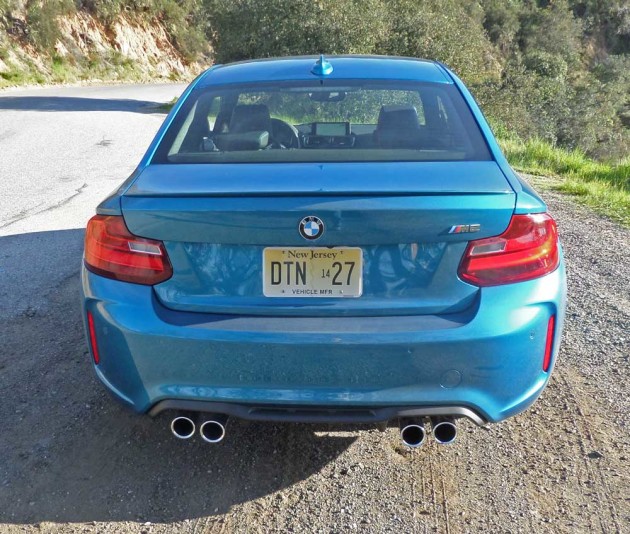 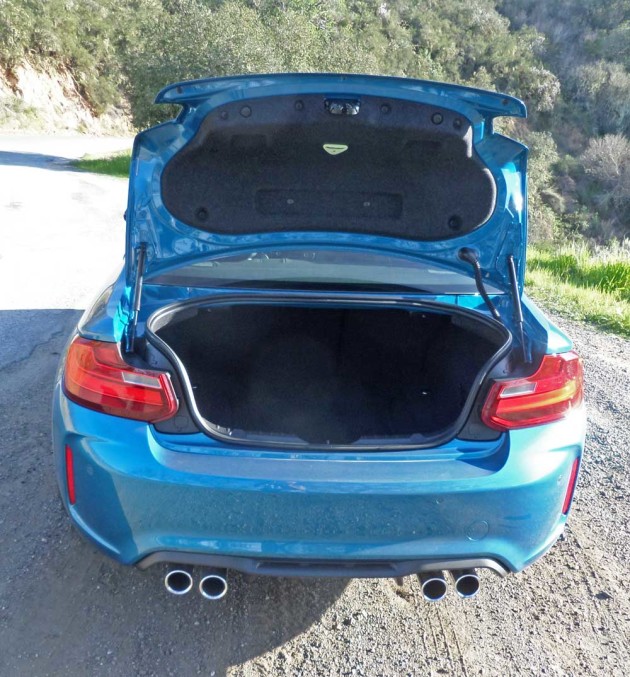 The car showcases its impressive on-the-road presence from virtually every angle. Its M-specific exterior features send out a whole-hearted statement of dynamics and agility, promising both a superior track performance as well as impressive on road abilities. In the grand tradition of BMW sport coupes, the M2 serves up design cues to highlights from its predecessors ? such as the BMW 2002 turbo and legendary BMW 3.0 CSL. 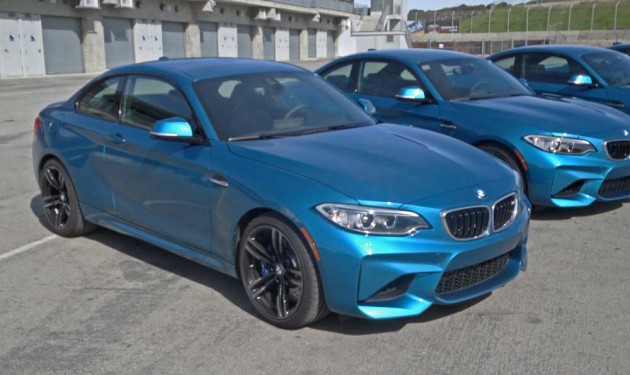 Up front are characteristic M design features. The signature BMW kidney grille, with its black-painted double bars replicating the design of the M double-spoke wheels, carries the BMW M logo. The three-dimensional design of the grille resembles a ?shark nose?. A modern execution of BMW?s twin circular headlights underlines the car?s forward-surging appearance and establishes a close stylistic connection with the grille.

The large front apron with trapezoidal blades and the Air Curtains in the outer air intakes reflect the protruding spoilers that have been a familiar sight in motor sport in past years. For the BMW M2 they were inspired in particular by the BMW 3.0 CSL touring car racer. Form follows function by diverting part of the airflow through the wheel arches, while the Air Curtains guide the air effectively past the wheels. The two features combine to reduce air turbulence around the front wheel arches, reducing drag. 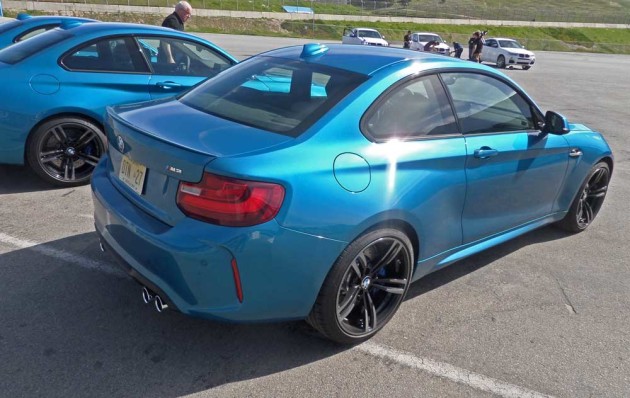 In profile, the M2 is immediately identifiable as a full-fledged member of the BMW M family. Hallmark BMW proportions and compact dimensions are displayed by a short front overhang, sweeping hood, long wheelbase and set-back greenhouse with BMW?s classic Hofmeister kink. The newly interpreted BMW gills aft of the front wheel arches resemble a feature first seen on the BMW 3.0 CSL.

The side swage line begins behind the front axle, then rises dramatically towards the tail, linking the flanks of the car with its rear end in classic BMW fashion; for instance, in the case of the BMW 2002, it extended around the entire vehicle.

The broad rear end is reinforced by the horizontal lines in the trunk lid and rear apron, and the M trunk lid rear spoiler accentuates the elevated dynamic image of the M2. Vertical reflectors at the outer edges of the rear apron form a stylistic connection with the trapezoidal blades at the front end. This feeling is additionally strengthened by the L-shaped rear lights – their horizontally arranged LEDs underscoring the athletic and imposing impression. The integrated diffuser in the rear apron references the racing abilities and adds to its optimized aerodynamics. Likewise integrated into the rear apron are the familiar quartet of hallmark BMW M exhaust tailpipes in high-gloss chrome, which draw renewed attention to the low visual center of gravity, while emitting an authoritative yet melodious note.

The defining elements of the interior include a driver-focused cockpit design with a contemporary brand of functionality. The car?s distinguished design identity illustrates its forward progress, reflecting the Ultimate Driving mantra in a more concentrated and intense form than ever before. Connectivity is state-of-the-art, as are Driver Assistance features, but that?s not really what the M2 is all about. 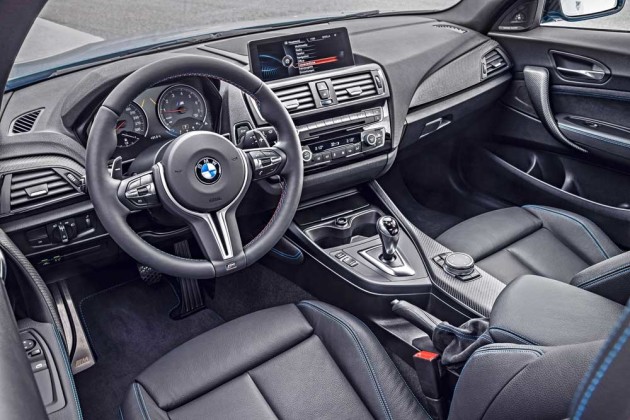 The M2 Coupe is fitted with the BMW iDrive operating system, featuring a freestanding onboard monitor in flat screen design. The Control Display comes in 6.5 or 8.8-inch form, with Navigation, while the Controller on the center console has a touch-sensitive surface which allows the driver to input characters (if equipped with the Navigation system). Doors feature frameless windows and turn signal indicators are integrated into the side mirrors.

Instruments with BMW M2-specific dials and needles, a speedometer scale reaching to 200 mph and a tachometer reading up to 8,000 rpm provide an indication of the car?s performance potential. Familiar M features also include M logos on the tachometer, gearshift lever, doorsill plates and M leather steering wheel with shift paddles. Other highlights of the interior are the BMW M2 trim strip with surfacing in open pore carbon fiber and Alcantara for the door panel inserts, parking brake boot and shift lever boot (manual transmission only).

During the international media launch based in Carmel, CA journalists from around the globe were afforded the opportunity to put the 2016 BMW M2 Coupe through its paces in normal, everyday driving scenarios, as well as on the famed Mazda Raceway at Laguna Seca.

Test BMW 2-Series coupes were equipped with the 7-speed DCT automatic transmissions for Track exercises (add $2900 for the optional DCT) and the 6-speed manual gearboxes for on road driving scenarios. All sported a Long Beach Blue metallic exterior finish and Black Dakota leather interior. The base price was set at $51,700, while the as tested price came to $54,495. for the M/T version. 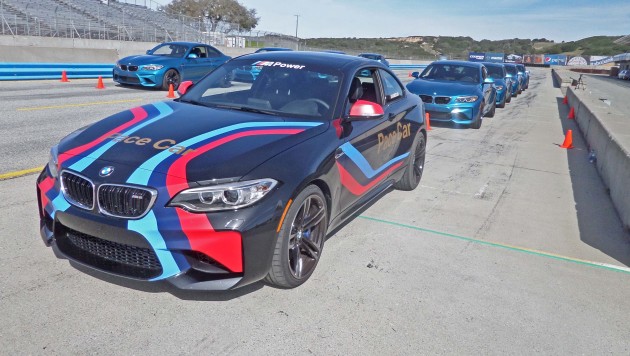 SUMMARY: Track sessions were conducted in a ?lead-follow? format with two vehicles per each driving instructor pace car ? one piloted by Bill Auberlin, Champion BMW Works driver, the other by Caludia Hurtgen, Global Chief Instructor of the BMW Group Driving Experience program. Each journalist was afforded an initial of 8-lap session, followed by as many sessions as time allowed. It goes almost without saying that the 3.0-liter, turbocharged, inline six cylinder engine is an incredible force ? a potent motor in a sub-compact, rear-wheel drive vehicle that is indeed indicative of BMW?s ?Ultimate Driving Machine? mantra. The braking performance is equally impressive. 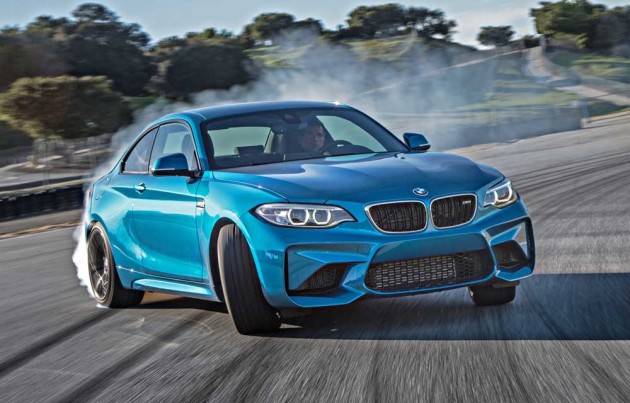 The M2 is truly a driver?s car that may be piloted in either a normal, docile around town cruising mode, or in all out, ?pedal to the metal? fashion. The 7-speed DCT automatic transmission may be operated in a normal comfort mode, a Sport mode, or in an invigorating Sport Plus mode. It may be operated in a fully automatic state, or gears may be selected manually via either steering wheel mounted shift paddles or the console positioned stalk, but it is pleasing in either format and every mode. The Sport and Sport Plus modes deliver elevated performance and response levels as well as more pleasing engine and exhaust notes.

Traction and stability aiding systems may be switched off for highly spirited driving maneuvers by highly skilled drivers, for a thrill ride, drifting experience on track. Acceleration is stellar, handling characteristics are incredible, and the ride quality may be adjusted to suit the driving scenario at hand. 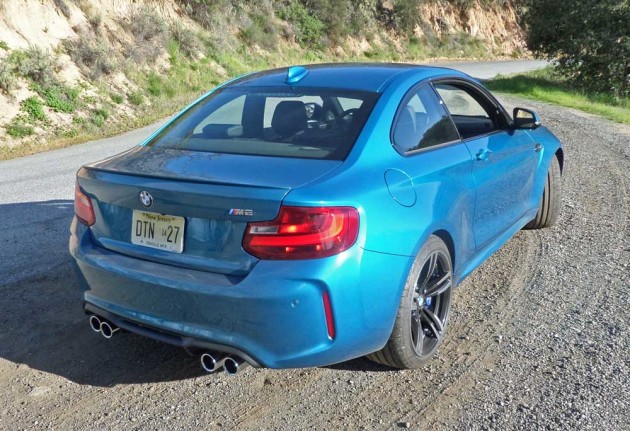 In the final analysis, the BMW M2 Coupe evokes a highly emotional, bold and muscular image, with power and performance to spare in spades along with a reasonable operational efficiency capability. It is awesome and definitely a top player in the sub-compact performance coupe category, and has moved up to become my new favorite BMW Coupe – until such time as an even better and more powerful M version undoubtedly comes along.