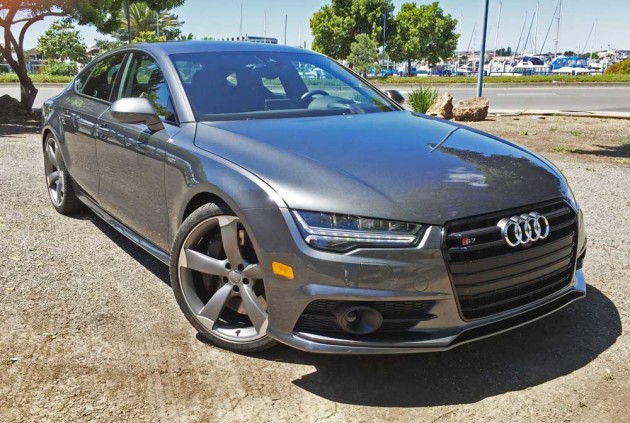 The A7 model was first introduced by Audi in 2012. It appeared as a sleek hatch or Sportback sedan that appeared in profile as a rakish coupe. It was powered by a highly efficient, 3.0-liter supercharged V6. The basic dimensions and elegant design form continue today in the 2016 Audi S7 ? a beefed up version of that original styling exercise, with its power coming from a longitudinally front mounted 4.0-liter, DOHC, 32-valve, TFSI? turbocharged V-8 engine that cranks out 450 horsepower in a range from 5,800-6,400 rpm (up 30 hp over the previous model), while also developing 406 pound feet of torque from 1,400-6,400 rpm. Energy is geared to Audi?s quattro all-wheel drive system with sport differential via a seven-speed S tronic automatic transmission with steering wheel mounted paddle shifters. 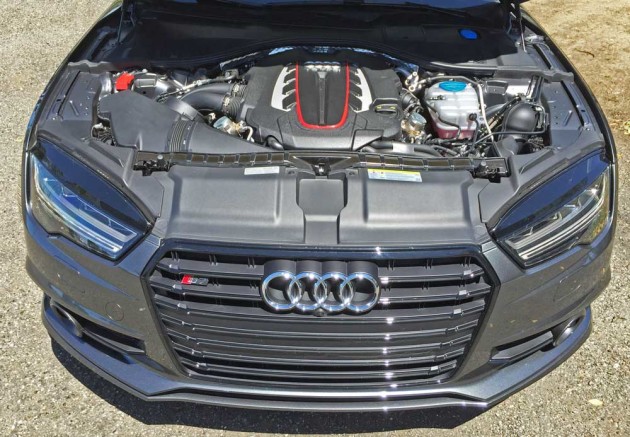 Nearly all luxury and performance oriented auto manufacturers produce models that fall into different levels based upon purpose. Audi?s model hierarchy breaks down as follows – ?A? prefix vehicles represent practicality, function and luxury, while ?S? designated vehicles deliver higher levels of performance than those in the ?A? category; ?R? designated vehicles are high end performers; and the ?RS? family of vehicles generates an even higher level of performance to a status of competitive capability gleaned from race-bred engineering.

?S? models showcase a stepped up ability and attitude, both visually and in realistic terms, without any sacrifices in comfort, convenience or functionality. The top three ?S? model vehicles are the S6, S7 and S8.

The Audi 7 body style happens to be my favorite in the sedan class, with its aerodynamic, elongated, coupe-like profile, and the Audi S7 adds to the vehicle?s overall appeal with its additional performance capability, thanks to the turbocharged V8 power.

In terms of design, Audi?s S7 creation, which we?ll deal with here, represents Audi?s design evolution. The 2016 Audi S7 blends the luxury and prestige of a sedan with the emotional appeal of a coupe, but with the functionality and versatility normally only found in a wagon. The S7 is a sleekly profiled four-door sedan ? make that five- door sedan, as the rear is actually in the form of a hatch that is positioned atop a sporty, lightweight chassis. The S7?s wheelbase measures 114.8- inches, and the overall length stretches to 196.3-inches. Add the 84.2-inch width (with mirrors) and its 55-inch height and you come up with an elegant and spacious package.

The roofline is low, with a gracefully arched greenhouse and integrated rear doors, projecting the coupe-like silhouette. The frameless door windows and side mirrors further enhance the coupe-like form; with the ?C?-pillar stretching rearward and flowing into the shoulder character line. The sharp ?tornado line begins forward at the headlamps, extending across the fenders, over the doors, and terminating in a soft slope toward the taillamps. The overall effect pays homage to the 1969 Audi 100 Coupe S. Audi?s signature Singleframe? grille is contoured at the hood?s leading edge, featuring a Black chrome surround framing the black lattices with chrome accents. The wide, low air inlets and horizontal struts, along with the fascia?s horizontal posture, emphasize the car?s width. 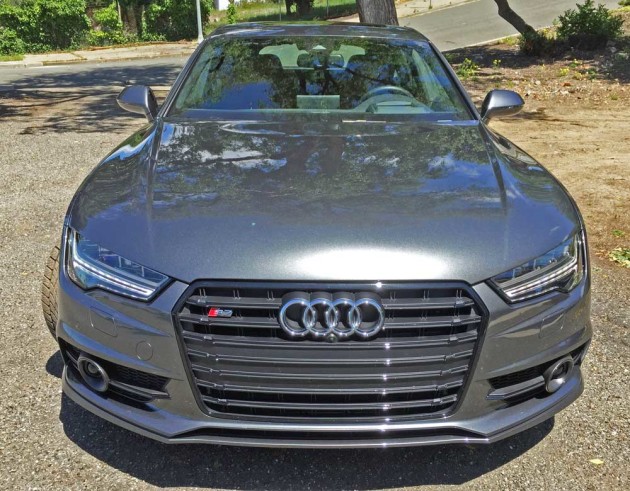 In addition to the LEDs in the daytime running lights and the LEDs incorporated in the turn signals ?powerful LED units comprise both the newly designed low and high beam headlamps on both sides. An optional adaptive lighting system modifies the illumination level. An integrated rear spoiler deploys at 80 mph and retracts at 50-mph. Dual exhaust outlets blend into the rear fascia and hint at the car?s performance capability, further enhanced by the freshened front and rear bumpers featuring air inlet grilles and extended rocker sills, along with a platinum gray diffuser insert. Side mirrors are executed in aluminum-optic and the rocker panels are S specific. 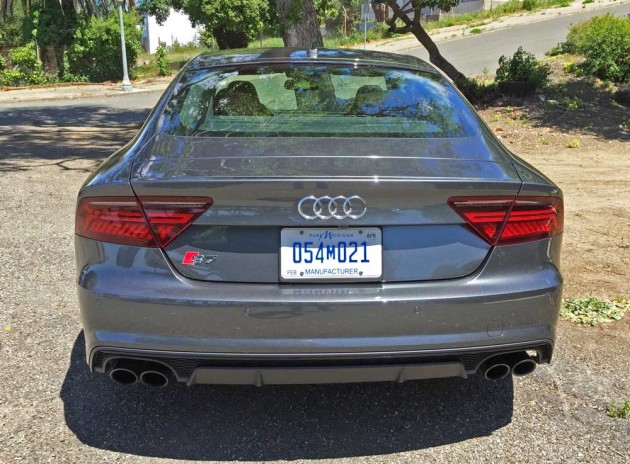 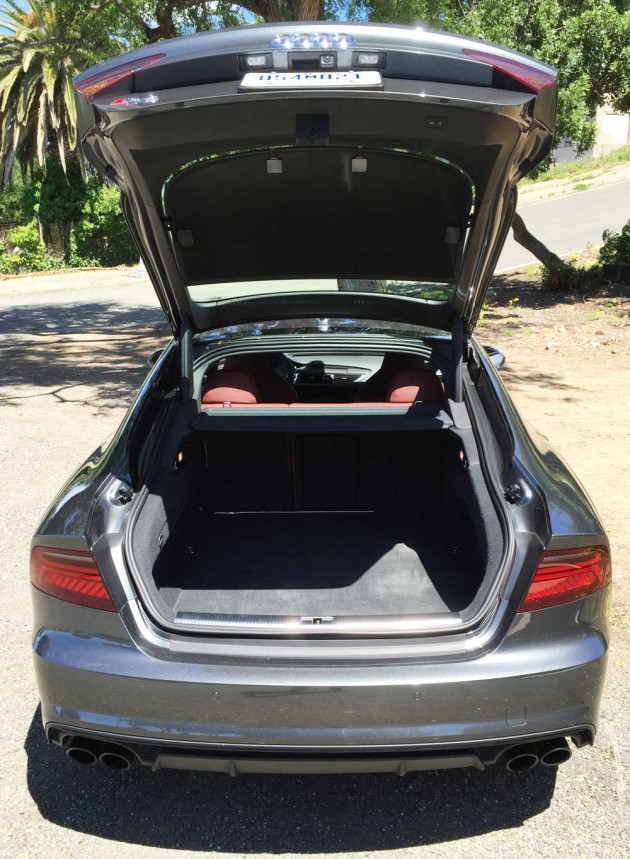 The S7 rides on 19-inch standard alloy wheels shod with low profile performance rubber or optional 21-inch alloys. Brake calipers are painted Black with an S7 emblem and a V8 T badge appearing on the front fenders and grille. 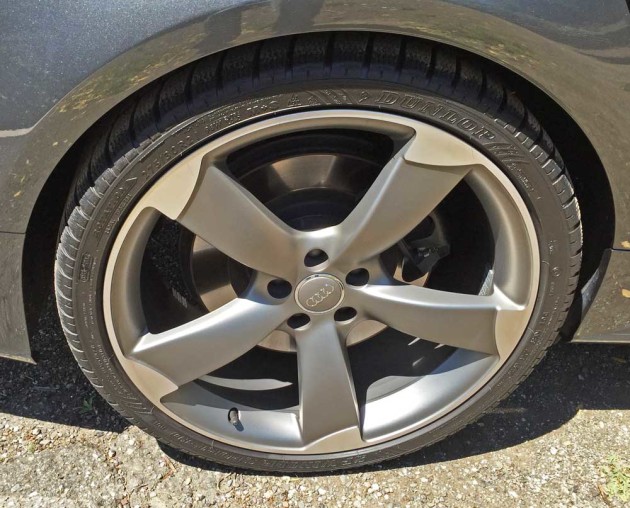 Moving to the interior, there is an S7 specific gray instrument cluster with white needles and emblem, a three-spoke multifunction sport steering wheel with contrast stitching, aluminum pedals and aluminum finish, wheel-mounted shift paddles. The starter button appears on the right side of the console with a red ring and gear selector lever executed in leather and chrome. Carbon Atlas upper is optionally available and the S seats are diamond stitched leather front and rear. Technology includes Audi MMI? Navigation plus with AT&T 4G LTE AT&T 4G LTE data connection and in-car Wi-Fi for passenger devices supported through NVIDIA Tegra processing power and Google? Local Search and Audi Drive Connect, which allows the driver to set up the car?s performance and ride characteristics to their own preferences and driving style. 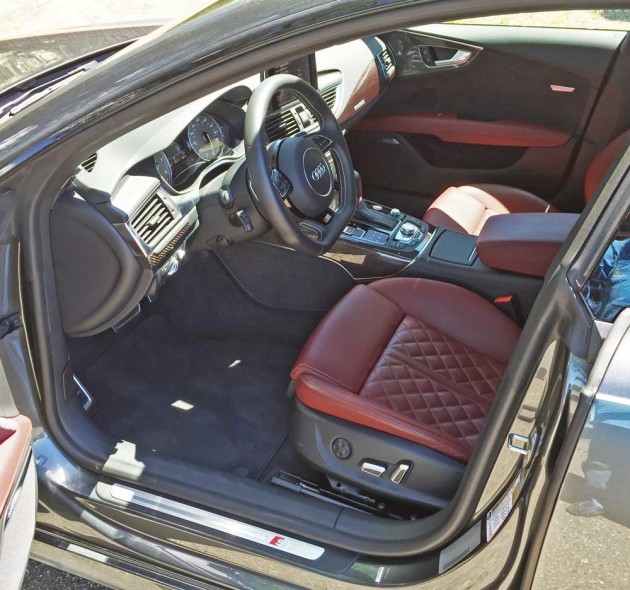 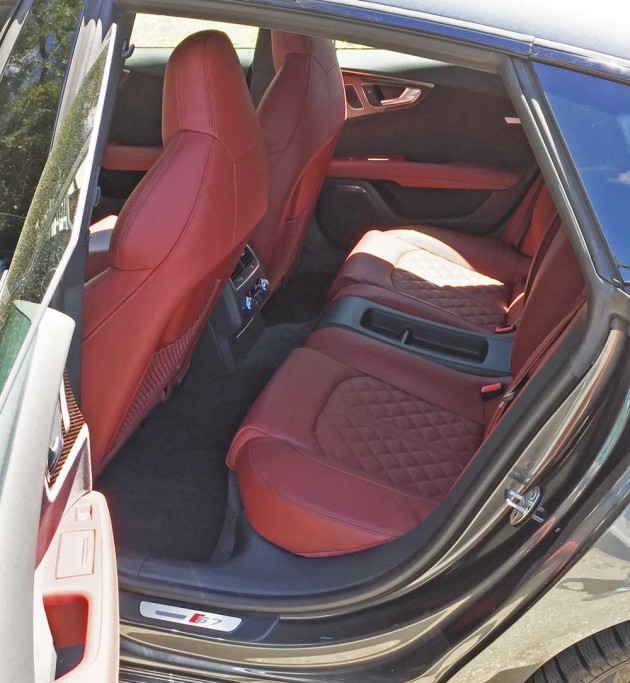 SUMMARY: The 0216 Audi S7 provides a positively exemplary driving experience in virtually every possible driving scenario – freeway, city, and challenging, twisty mountain roads, with an incredible balance of power and handling characteristics. In experimenting with the Audi Drive Connect, accessible through the MMI in all settings, the Dynamic mode proves to be the most rewarding for me in spirited driving scenarios. Shift patterns, ride quality, steering input and exhaust note all benefit from the Dynamic setting. In fact, the S7 is so efficient in shifting up and down intuitively and automatically, that to use the paddle shifters seems almost unnecessary, as I was unable to come even close to matching the car?s timing and capability. All I had to do was accelerate, brake and steer, while the car sensed what gear was needed in any given situation. 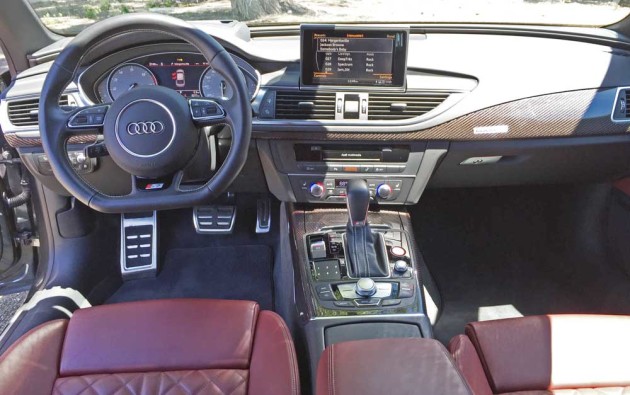 Not only is the 2016 S7 sedan a virtual projectile in its acceleration capability, it is extremely comfortable and supportive while adeptly handling road conditions with superlative stability, positively bolstering one?s confidence, and seemingly also one?s driving ability. The quattro? permanent all-wheel drive sport differential on S7 has been upgraded with new software algorithms that aid in providing higher levels of responsiveness and greater agility, and the S7 brakes impressively as well, stopping on a dime. 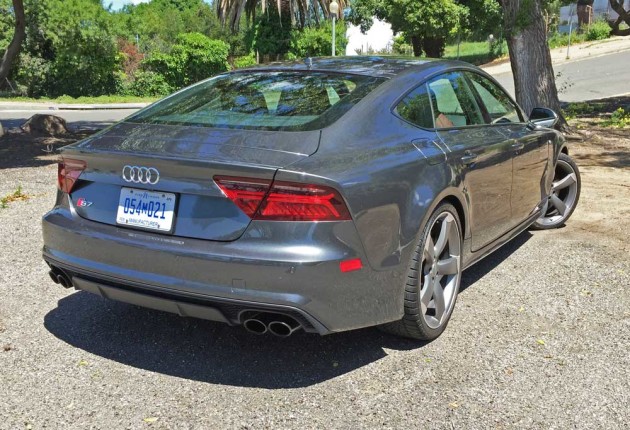 There?s another German auto manufacturer that claims to provide the ?ultimate driving machine?, but the Audi S7 could also lay claim to that distinction, because it too delivers an ultimate level of performance and satisfaction on its own. The only shortcoming that I noted was that a second power outlet set further forward than the center console?s center storage, is needed to facilitate a radar detector?s cord without stretching it to the limit, which would definitely be a plus. Given that tiny flaw, the 2016 Audi S7 is both beautiful and sexy to behold, while executing all of its functions admirably. It is truly an elegant sedan and exceptionally exhilarating sporty performer either in fully automatic mode or clicking through the gears manually with the paddle shifters. 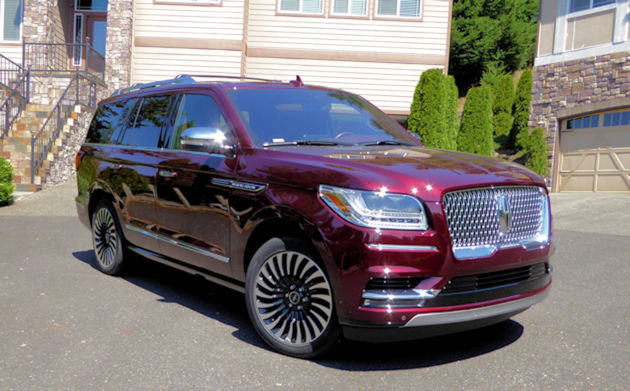