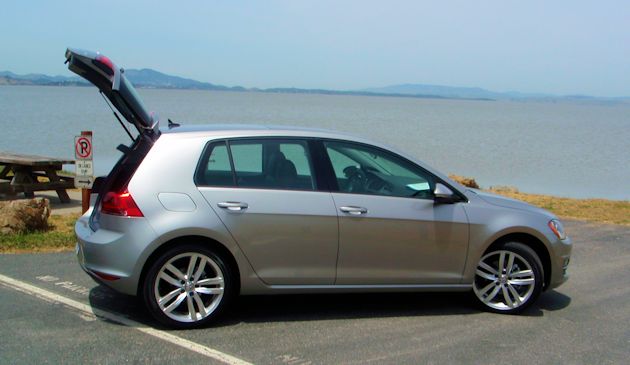 Europe?s top selling model, the Volkswagen Golf, has a remarkable history, with more than 30 million sold worldwide since it originally went on sale in Europe in 1974. It debuted in the U.S. in 1975 as the Rabbit and was even built in the U.S. for 10 years. 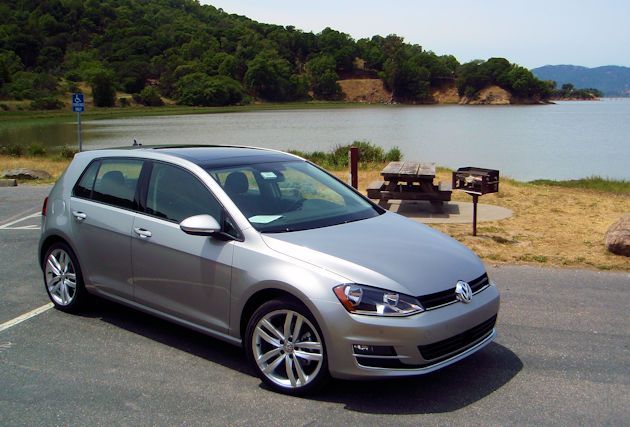 The latest Golf rides on Volkswagen?s new MQB modular platform, which is becoming the basis for many other models in the German carmakers lineup. The new architecture allows for a more ?cab-backward? design, which creates a more upscale look. However, no one is going to have trouble identifying the Golf, because the basic look hasn?t changed much, even though it?s all new. 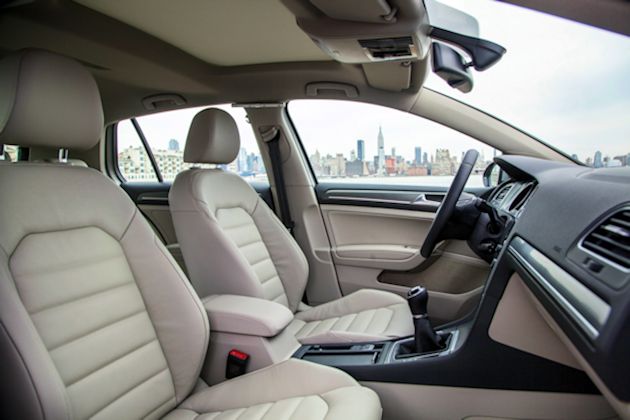 The upscale evolution also moves inside with a slightly larger and a bit more luxurious cabin. Cargo space is also a bit larger with 16.5 cubic feet of space below the cargo shelf, or 22.8 cubic feet stacked to the roof. The Golf boasts more room than all the mid-size sedans, plus, because it?s a hatchback, the rear seat back can be folded and the capacity gets ?wagonish? with 52.7 cubic feet ? think room for a bicycle or a really big dog. 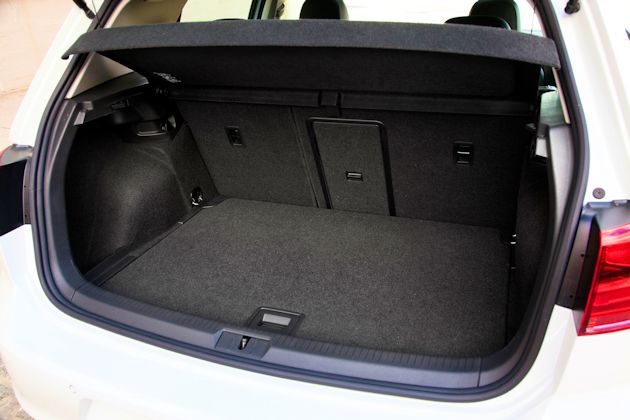 Ergonomic control placement is excellent with simple, well-marked controls conveniently located. Texters, or others who type with their thumbs, will love all 14 control buttons mounted on the 3 o?clock and 9 o?clock spoke positions of the steering wheel. 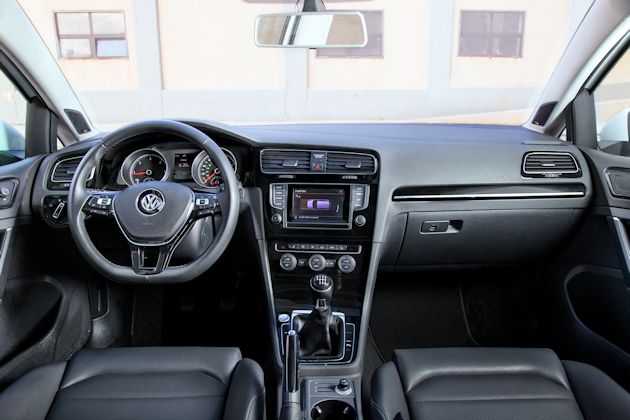 A larger 5.8-inch infotainment screen is mounted high on the center console, but I?d like to see it even higher and a little bigger, too, because it still requires taking your eyes off the road to see and operate. The navigation system gets its information from an SD card and includes a 3D-look display. This display also has a proximity sensor function, which senses when a hand is nearby and automatically switches its display to a more finger-friendly layout. The Media Device Interface with iPod and iPhone? connectivity is now housed in the center stack, while more traditional media such as CDs and SD cards can be inserted into slots in the large glovebox.

Larger, lighter and more efficient, the new Golf comes to America in two variations, with two engine choices, two transmissions and three trim levels — the TDI diesel engine is only available in the four-door versions, however. 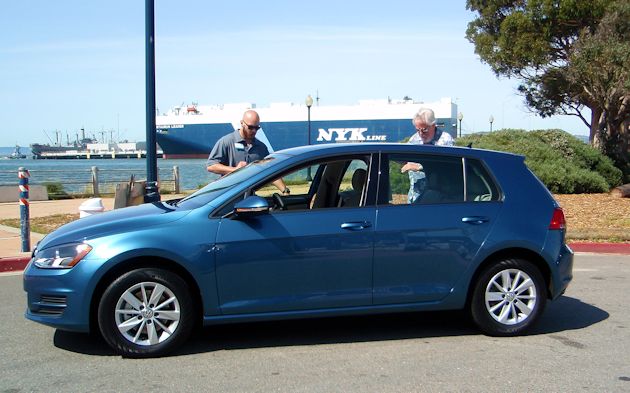 Arriving at dealerships now the 2015?Volkswagen Golf TSI has dropped the 2.5-liter gasoline engine that was the base engine for many years, in favor of the company?s new 170-hp, 1.8-liter turbocharged direct-injection four-cylinder gas engine with a standard five-speed manual transmission or optional six-speed automatic. Volkswagen estimates a 0 to 60 mph time for the TSI at 8.6 seconds, but it felt a bit quicker to me. It reminded me of the larger turbocharged four-cylinder engines used in the previous generation Golf. Fuel economy is expected to be about 20 percent better than the old five-cylinder at 26 mpg city and 37 mpg highway with the manual transmission and 26/36 mpg with the automatic.
Volkswagen has been a leader in diesel technology in the U.S. since 1977. The recent clean diesel models have been selling like the proverbial hotcakes. The Golf TDI? is a 150-hp 2.0-liter direct-injection four-cylinder with a six-speed manual transmission or a six-speed DSG? dual-clutch automatic. Zero to 60 mph time is estimated at 7.5 seconds and EPA fuel economy is listed at 31/42 mpg. With my wife, Barbara, driving I?ll bet we?d see 45 mpg plus. 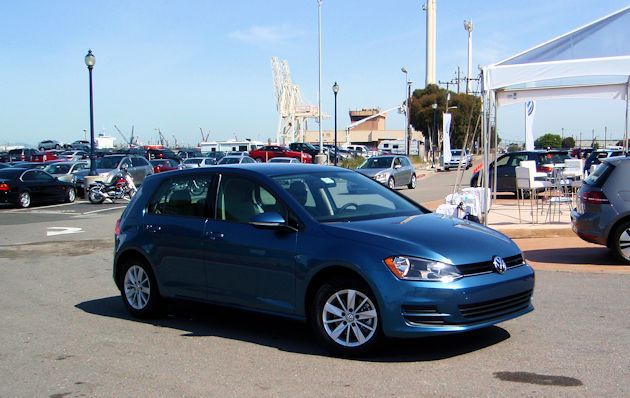 The 2014 Golf TDI tied for first in the annual Consumer Reports Compact: Hatchbacks/Wagons ratings and the TSI was ranked second with both getting a ?Recommended? rating. I expect the 2015 model should do equally well.

Both of the Golf models I drove at the California introduction felt solid and very well balanced. Performance levels were very good and of course the fuel efficiency, especially the TDI, should put them at the top of the category.

Volkswagen is introducing Generation 7 with a special Launch Edition of the two-door with manual transmission. Priced at $18,815 including the destination charge, it includes and extensive equipment offering. The TSI is available in three other trim levels, S, SE and SEL with prices ranging from $19,815 from the S two-door manual (the automatic is $1,100 extra) to $27,815 for the very well-equipped SEL four-door with automatic transmission. The TDI four-door trim levels are offered at $23,915, $27,415 and $29,915 respectively.

The new Volkswagen Golf is a notable upgrade for an already impressive car. It gives owners the feeling of an upscale German model, at a down to earth price. 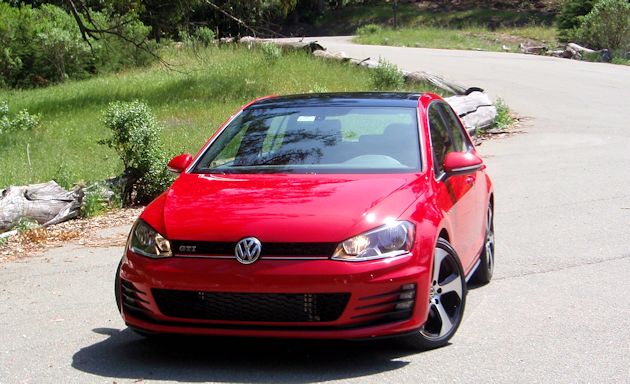 Volkswagen GTI – I also had an opportunity to spend some time in the awesome new GTI. It?s the iconic performance version of the Golf and the car that started the hot hatch movement. With 210 horsepower from a turbocharged 2.0-liter direct injection four-cylinder engine the GTI is capable of a 5.7 second 0 to 60 mph time. Later in the model year there will be an optional performance package that will bump the horses by 10 and add a torque- sensing electronically-controlled limited-slip differential and larger brakes. I?ll report on the GTI later in the model year. 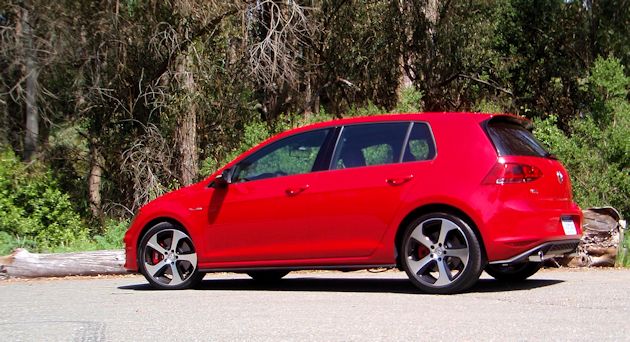 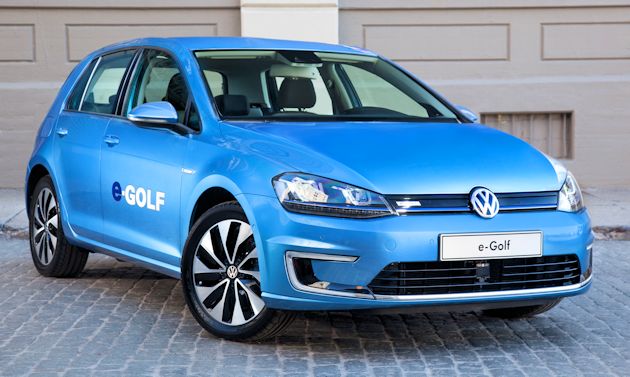 Volkswagen e-Golf – Volkswagen?s first fully electric vehicle, the e-Golf, is due out in the fourth quarter of 2014 and I had a preview of great things to come on a short drive. Part of Volkswagen?s Think Blue? program, the electric Golf is fun to drive and features some new electric vehicle technologies like driver selectable regenerative braking and an 80 percent battery charge within 30 minutes. They also plan to have a Roadside Assistance Plan that?s designed to take the anxiety out of ?range anxiety?. For instance, if the customer runs out of charge and is within 100 miles of their home, Volkswagen?s Roadside Assistance provider will deliver the car to a nearby and convenient source for charging and will even pay for the customer to take a taxi home or to work if they decide not to travel with the car. I?ll have more on that later, too.