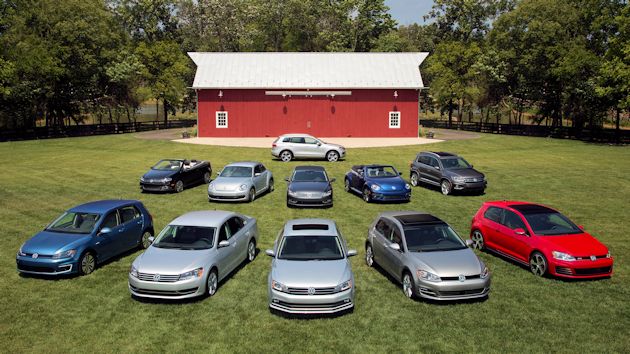 Middleburg, VA ? Driving most of the 2015 Volkswagen Full Line in one day is kind of like getting a ?State of the brand? report. With such an event, it?s impossible to actually experience the vehicle?s capabilities, especially in the Virginia countryside, which has strictly enforced speed laws and narrow roads. Never-the-less you can see where the brand is going — we thought Volkswagen?s future looks brilliant.

Worldwide, for the first seven months of 2014, Volkswagen is showing a 6.4 percent increase in sales from 2013, compared to an overall average of 4.7 percent across the industry. Volkswagen has been making a concerted effort to grow the brand in North America and to that end they have invested over $4 billion dollars in North American facilities since 2008 and plans call for the Volkswagen Group to invest another $7 billion by 2018.

The Chattanooga, Tenn., plant, which was finished a couple of years ago to build the latest generation Passat, will be expanded to build a new seven-passenger SUV. This will create 2,000 new jobs at that facility. R&D is a big deal for VW too — plans also call for opening a National Research and Development and Planning Center in Chattanooga adding 200 new engineers. 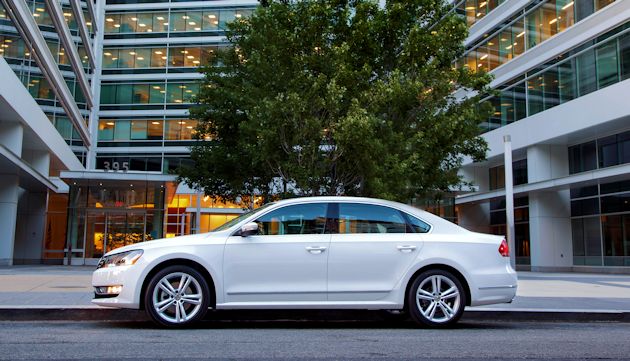 Part of Volkswagen?s goal includes changing the lifecycle of sedans to a major refresh after three years and a new vehicle two years later cutting the current seven-year lifecycle by two years.

Then there are the cars. We?ve always said that the products are the most important part of the automotive business, and Volkswagen has an outstanding lineup. In general, we like the overall quality and drivability of all the cars we drove. The interiors are more sophisticated and upscale with very comfortable seating and excellent fit and finish.
There is also an overall trend toward a greater use of new technologies and safety equipment with the expanded availability of features like infotainment systems, blind spot monitoring, rear traffic alert, forward collision warning and park distance control. 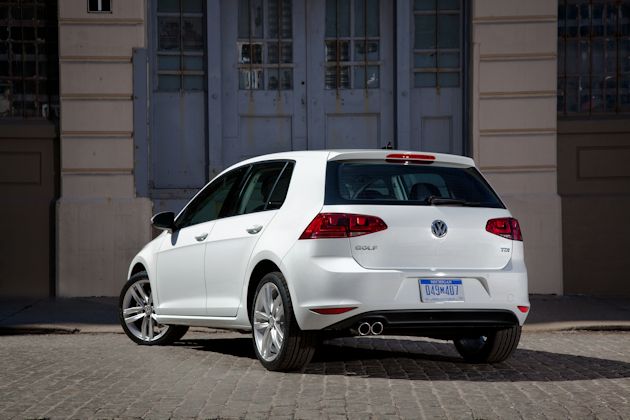 One of Volkswagen?s greatest advantages is the excellent diesel engines (TDI) which are available in nearly every model. The engines are clean, quiet, and odorless plus the fuel economy and performance is excellent. Volkswagen has been responsible for the recent growth in the popularity of diesel. Currently, about 75 percent of the diesel cars sold in the U.S. are Volkswagens.

Of all the cars we drove in Virginia, three were new or significantly changed for 2015 Jetta, Golf/GTI and the all new e-Golf electric vehicle. 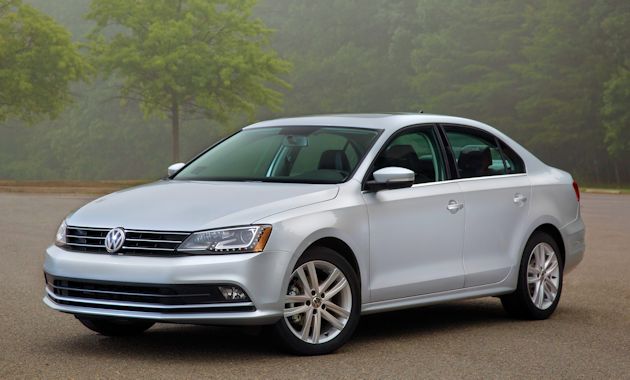 Volkswagen Jetta
Volkswagen?s best-selling U.S. model, the Jetta, has been redesigned for 2015. The exterior gets new bumpers, grille and trunk lid. These changes along with underbody panels and active radiator shutters improve the Jetta?s aerodynamics. It also has available bi-Xenon headlights and LED daytime running lights.
Inside, the Jetta is the leader of the of the Volkswagen interior upgrade movement with chrome accents, multi-function steering wheel, Bluetooth and an overall high quality feel. 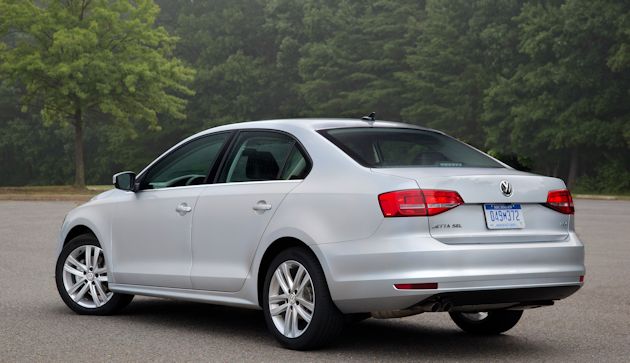 Jetta has five available powertrains: in addition to the base model there is a diesel, two turbocharged four- cylinder engines and a hybrid.
The 1.8T SE we drove was very rigid and quieter than we remember previous models to be. The interior feels roomy with a comfortable fit for four adults, with a tight fit for the third adult in the rear seat. Overall, it has a significantly more upscale look than previous generations. On our casual drive the Jetta stayed flat in the corners and the steering was precise. The new 170-hp 1.8-liter direct injection turbocharged engine accelerates from 0 to 60 mph with the six-speed automatic transmission in 7.9 seconds according to Volkswagen ? the manual is about 0.6 seconds quicker. 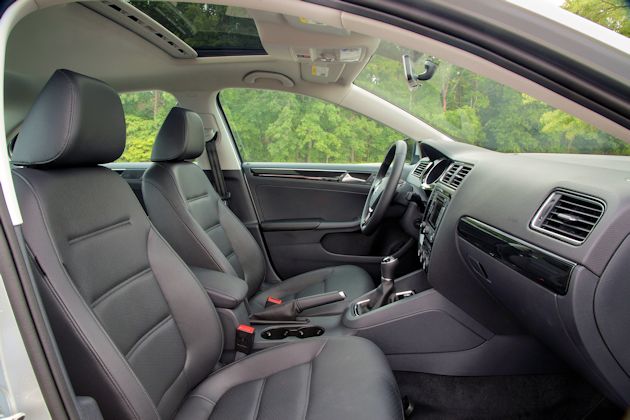 Jetta pricing of the four gasoline powered models ranges from $17,035, including the destination charge for the base model to $26,200 for the 1.8T SEL. The optional Driver Assistance Package (blind spot monitor, forward collision warning and upgraded instrument cluster) and the Lighting Package (bi-Xenon headlights and LED daytime running lights (DRL)) take the SEL price to $27,890. The Jetta Hybrid price starts at $31,200. The three Jetta TDI diesel trim levels range from $23,560 for the S up to $28,330 for the SEL. The optional Driver Assistance and Lighting packages add $1,690. 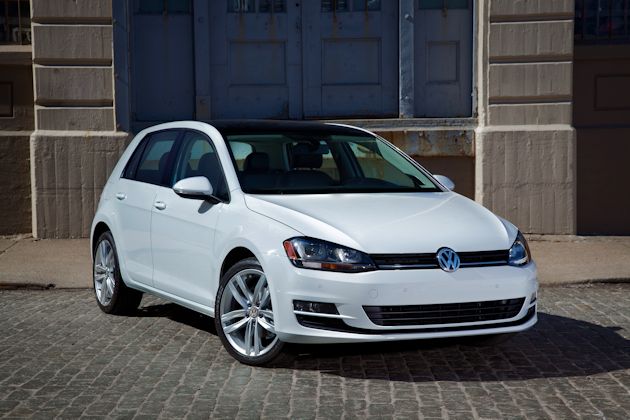 Volkswagen Golf and GTI
The 2015 models of the venerable Volkswagen Golf and its performance sibling, the GTI are at dealerships now representing the seventh generation and 40 years in the U.S. market. Both are available as two- or four-door hatchbacks. The Golf has two engine choices: the TSI a 170-hp 1.8-liter turbocharged direct injection four-cylinder (gasoline) engine with a five-speed manual or six-speed automatic transmission or the TDI 150-hp 2.0-liter four-cylinder (diesel) with six-speed manual or DSG? double-clutch automatic transmission. The TSI manual gets an EPA fuel economy rating of 25 mpg city and 37 mpg highway. The TDI is rated at 31/46 mpg. The automatic transmission highway mileage figures are one to two miles per gallon lower. 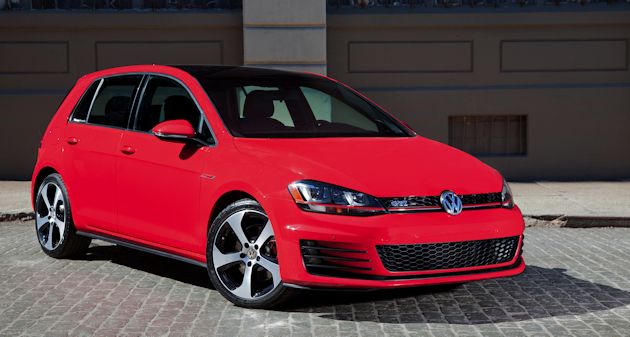 The Golf GTI is the most powerful and fastest GTI to date powered by at 210-hp turbocharged, direct injection four-cylinder engine. Buff magazines list the 0 to 60 mph time at 5.3 seconds and Volkswagen says the top speed is 153 mph.

These new models are built on Volkswagen?s new modular vehicle platform which allowed designers to give them a more upscale look. The new models are larger, lighter and better equipped than previous models. On our initial drive, it was obvious that the new Volkswagen Golf and GTI models have the typical German car feel and precision, along with a new level of performance. 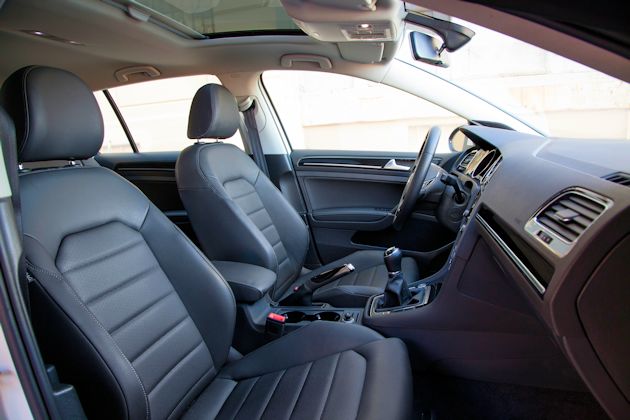 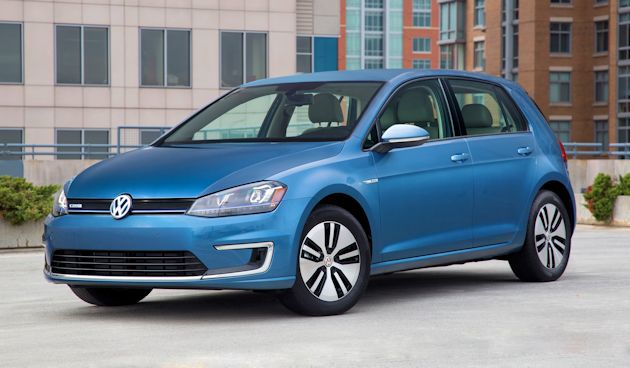 Volkswagen e-Golf
We?ve driven most of the available electric vehicles, and the e-Golf is one of our favorites simply because it feels like a regular Golf ? only even smoother and practically silent. Under the hood of the e-Golf is a 115 horsepower electric motor with a single speed transmission. The 24.2 kWh lithium-ion battery gives e-Golf a normal range of 70 to 90 miles and a potential of more than 100 miles when used in the ?Eco+? mode. 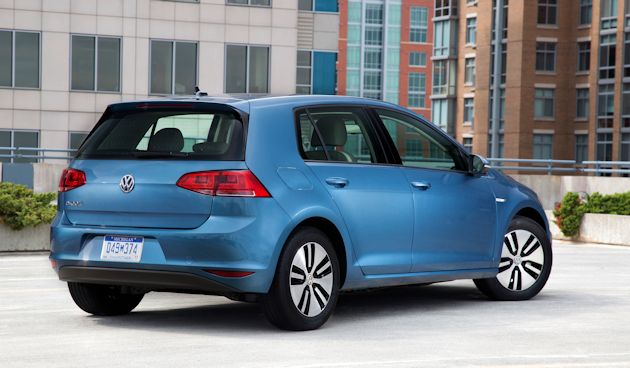 There is an onboard 110/120-volt battery charger that will give the battery a full charge in about 20 hours. An available 240-volt home charger that will do the job in about four hours or a public fast charge system gives the e-Golfs an 80 percent charge in about 30 minutes. The regenerative braking system, which adds charge to the battery during coasting and braking, has three driver-selectable settings and three e-modes to allow the driver to tailor driving conditions and driving styles for maximum efficiencies.
The 2015 e-Golf is the first Volkswagen to use LED headlights plus it has a distinctive ?C-shaped? LED daytime running lights pattern. 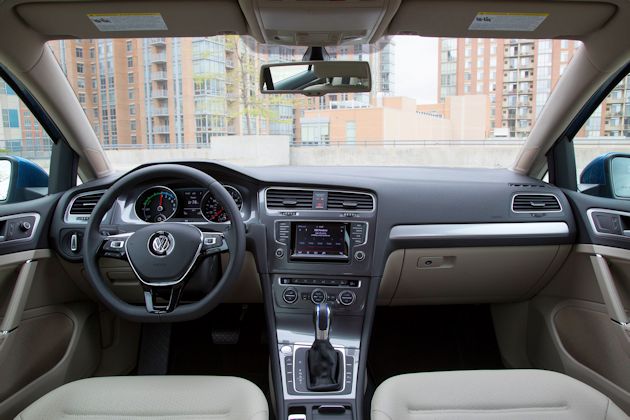 The e-Golf gets special airflow management to reduce its coefficient of drag to a very low 0.27. It also uses aerodynamically optimized 16-inch aluminum-alloy wheels with low rolling resistance tires. A 0 to 60 mph run in the e-Golf takes and estimated 10 seconds. This car is fun to drive offering most of the same dynamics as a regular Golf, with the amazing electric vehicle efficiencies.

The e-Golf SEL comes with a high level of features including standard equipment like navigation, Bluetooth?, SiriusXM? Satellite Radio, VW Car-Net connected services, Front and Rear Distance Control and heated windshield. The 2015 e-Golf is priced at $36,265, including the destination charge. It goes on sale late in 2014 and also comes with a Roadside Assistance Plan that helps to mitigate the typical electric vehicle range anxiety. 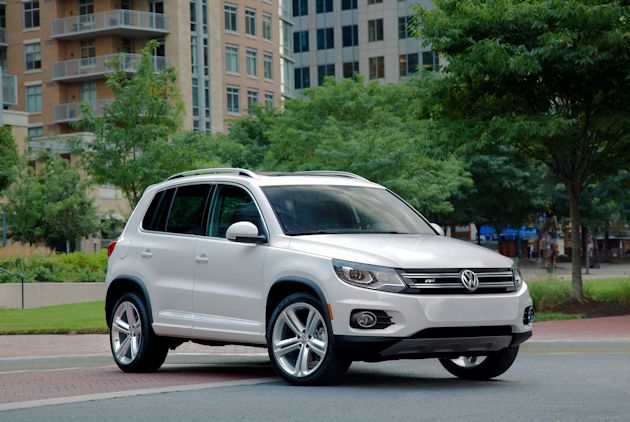 During our day with the 2015 Volkswagen catalog of new cars in the beautiful Virginia countryside we also drove the CC Sport Sedan (one of our all-time favorites), Passat, Beetle, Eos convertible, Tiguan and the Beetle Convertible. One bit of bad news for us was that Eos, which is one of Barbara?s favorites, will be discontinued after this model year. 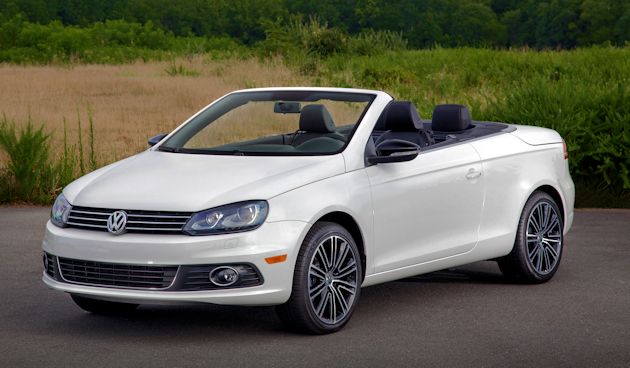 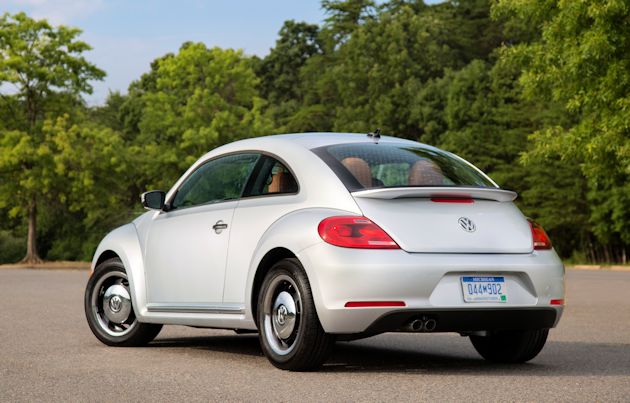 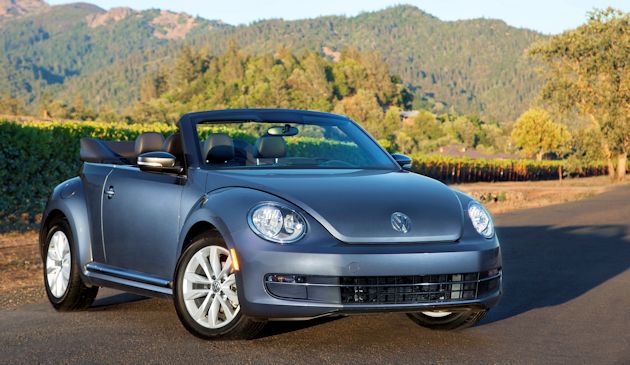