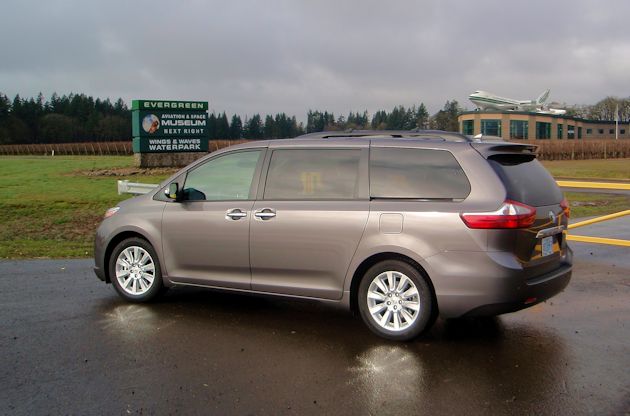 Normally we try to take road trips when we get an exciting luxury car or an especially fun car. A few weeks ago we?d put the cart before the horse and found a couple of nights available at our favorite time-share resort at Depoe Bay overlooking the Oregon coast. The test car that we had for the trip was the 2015 Toyota Sienna Limited ? a minivan, or whatever they are called this week.

We have always liked minivans because they are so practical and comfortable, so even though it was just the two of us, it seemed good for the jaunt to the coast. 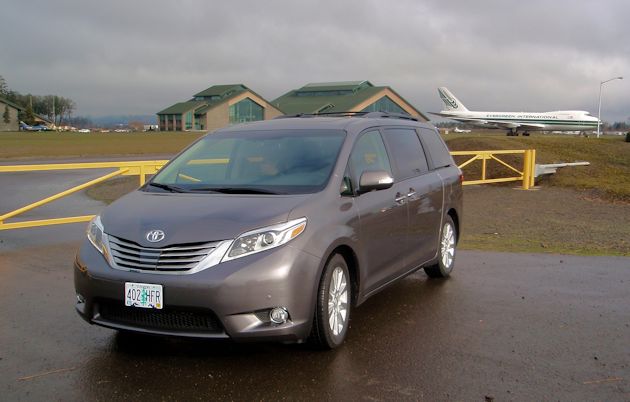 Our test vehicle was the top of the 2015 Toyota Sienna lineup, the Limited Premium model. The only feature it did not have is the optional all-wheel drive. The Sienna is distinctive because it is the only minivan that has available AWD and that?s a big plus for owners in the northern climates. 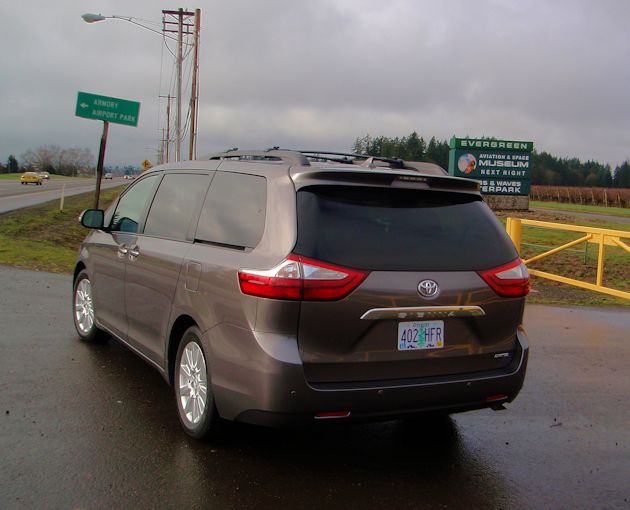 As we loaded luggage and the various items we usually take to spend time in a condo, we were impressed and thankful for the low loading floor in the rear behind the third row of seats. Even with all the seats in use there?s more than 39 cubic feet of cargo space ? that?s enough space for four large suitcases or five sets of golf clubs so our things fit easily. When more cargo space is needed, the third row of the Limited model can be folded flat in a 60/40 split simply by pushing a power button in the rear of the cargo space. The space is so versatile that when the two rear rows are folded the space grows to 117.8 cubic feet?remove the second row seating and the space grows to 150 cubic feet. That?s large enough to carry 4×8 foot sheets of building materials flat –something many pickups can?t do. 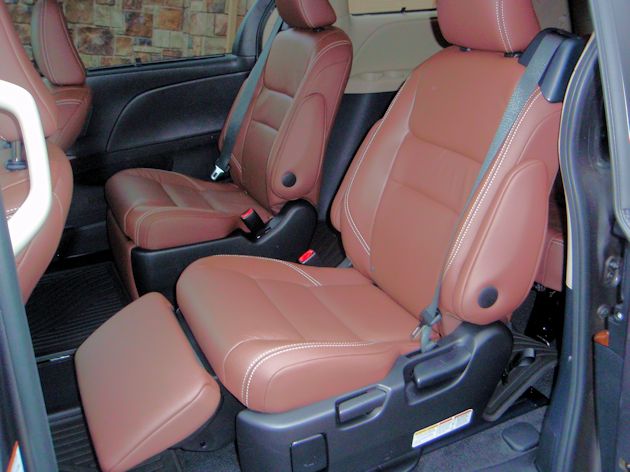 The Sienna is available in seven- and eight-passenger seating configurations. Our seven-passenger Limited front-wheel drive model had captain?s chairs in the second row that each slid backward or forward over a 23 inch range. That allows the cargo space to expand or contract, or in this particular model it allows the seats to be pushed back so the passengers could fold out the foot and leg rests on each seat, much like a living room recliner. 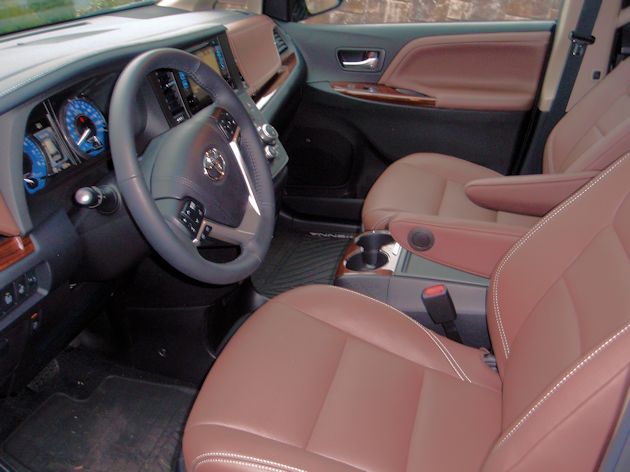 Passengers in those reclined seats can enjoy video entertainment on the wide 16.4-inch screen that folds down from the ceiling with audio coming from the available wireless headsets. It?s a very decadent way to travel. One other interesting feature in the Sienna is the Driver Easy Speak system which uses a microphone in the overhead console to amplify the driver?s voice and broadcast it through the rear speakers ? that takes ?hollering at the kids? to a new and lower level. 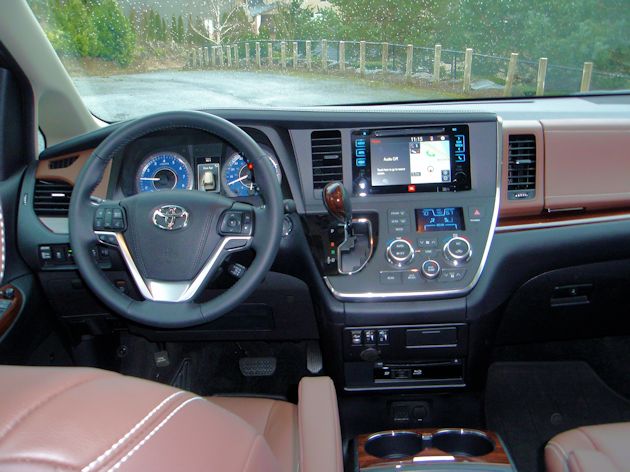 It was just the two of us on this trip and we enjoyed the plush heated leather front seats and the Entune Premium JBL audio system with Navigation and App Suite. This feature-laden system included a split screen display, HD radio, CD player, satellite radio and a variety of input ports for other infotainment sources. We brought along our favorite travel pastime, a CD audio book, which we picked up at our local library.

The Sienna seating is at a nice easy height so you don?t have to climb up into or struggle to get in and out of a low to the ground seat, yet it still gives the passengers the desirable slightly higher view of the surroundings. 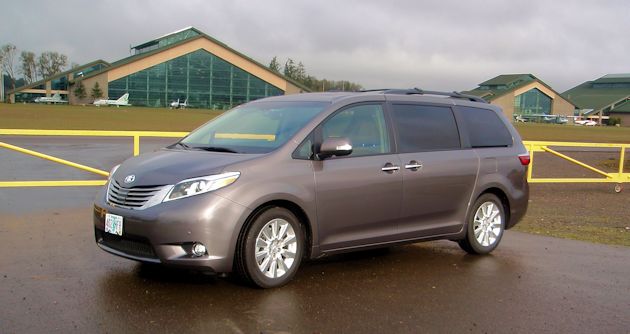 All five Sienna trim levels are powered by Toyota?s stalwart 266-hp, V-6 engine. The latest version of the 3.5-liter engine has direct injection and DOHC variable valve timing. The transmission is Toyota?s efficient six-speed automatic. The Sienna accelerates from 0 to 60 mph in 7.8 seconds according to buff magazine tests. The EPA lists fuel economy at 18 mpg city, 25 mpg highway and 21 mpg combined. The Sienna trip computer showed 24.1 mpg at the end of our trip.

The Sienna isn?t designed to be used in autocross racing but for everything else from road trips to running errands the Sienna works great. There?s a little lean in the corners but it stays mostly flat with a controlled ride despite its size. Driving over the mountains on the Salmon River Highway southwest of Portland, the Sienna was smooth, quiet and comfortable. It even has good passing power for getting around slow moving vehicles. Next time we should probably take a bunch of friends or family so we can see how it does with a full load. 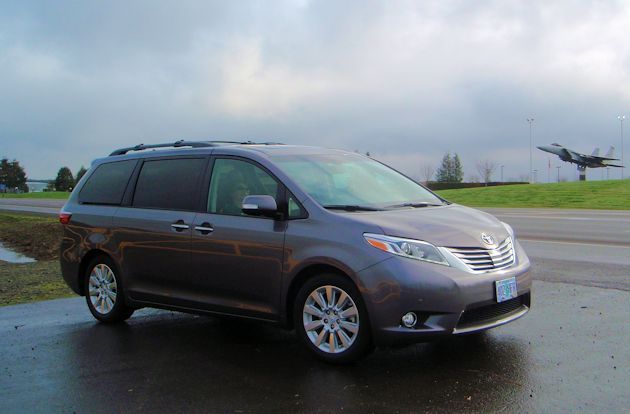 A more aggressive driver might want to check out the Sienna SE. It has a side skirt body kit, smoke-look sport trim and LED daytime running lights, plus it?s lowered slightly and has a sports-tuned suspension and 19-inch wheels for a bit more precise handling.

The 2015 Toyota Sienna comes in L, LE, SE, XLE and Limited models with some Premium variations in the mix. Prices range from as low as $29,485, including the destination charge, for the seven-passenger L and go as high as $47,035 for the Limited Premium AWD. The AWD is available on all models except the base L model. 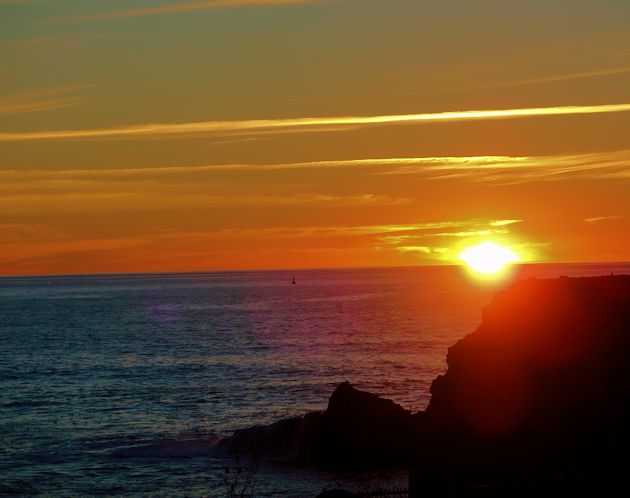 After driving the upscale 2015 Toyota Sienna Limited to the coast, it seems as if we made a great choice, it was every bit as comfortable and luxurious as many of the luxury cars we get to drive. It was as perfect for going to the coast to watch the sunset, as it is for running errands around town or hauling building materials for a home improvement project. 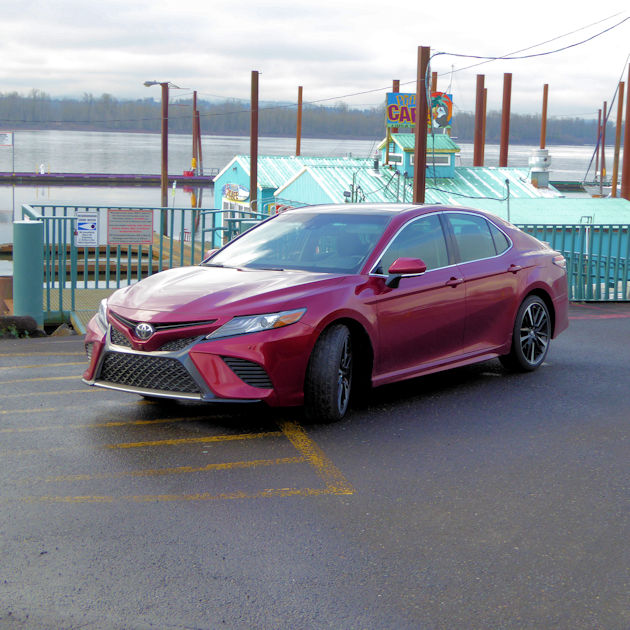 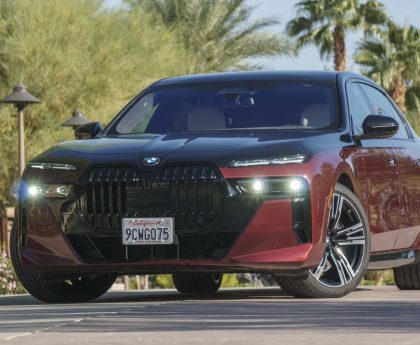