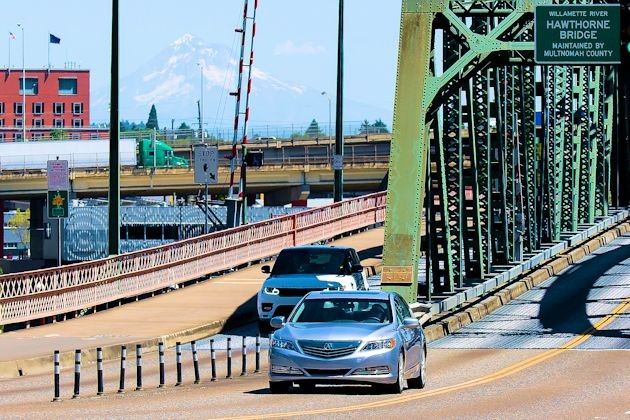 Photos by?Doug Berger / NWAPA
Portland, Ore. ? There is a revolution on the U.S. highways. It started in 1999 when Honda introduced the first hybrid electric car, the Honda Insight. A year later, Toyota started selling the Prius and expanded the hybrids to other models and by the end of 2014 they have sold more than seven million hybrids worldwide. The hybrids are being challenged by clean diesels, plug-in hybrids, electrics and other fuel efficient entries. 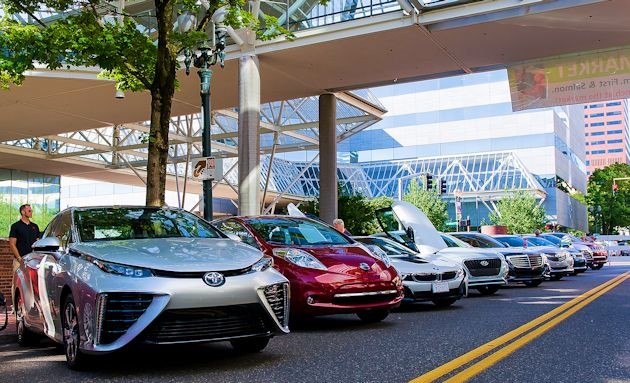 As an example of how far this transportation revolution has come, the 2015 Fuel Economy Guide published annually by the U.S. Department of Energy, the Office of Energy Efficiency and Renewable Energy and The Environmental Protection Agency lists the following numbers of alternative fuel vehicles currently or about to be sold in U.S. market:

In July members of the Northwest Automotive Press Association (NWAPA) held their third annual ?Drive Revolution? program and sampled 16 of these revolutionary vehicles on the streets of Portland, Oregon. After driving each of the vehicles, the panel of 19 Northwest U.S. and Canadian journalists picked their favorites in three categories: Electric Vehicles, Hybrids, Green Luxury Vehicles and an overall winner which received the title of Northwest Green Vehicle of the Year. 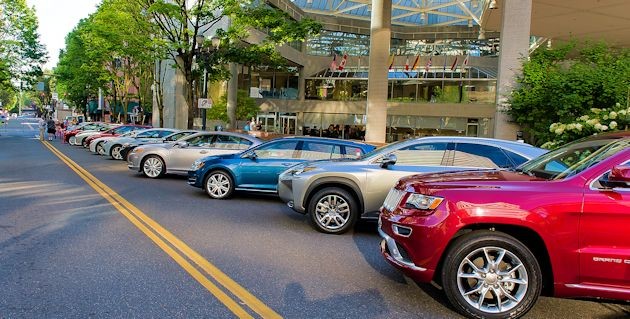 Leading the group to be named Northwest Green Vehicle of the Year was Toyota?s innovative new fuel cell car, the 2016 Mirai. The hydrogen fueled car goes on sale through eight authorized dealers in Southern California in October 2015.
The category winners at the green car drive included Volkswagen?s e-Golf as the top electric car, the Acura RLX Sport Hybrid as the best hybrid and the Mercedes-Benz S550 as the top Plug-In Hybrid. 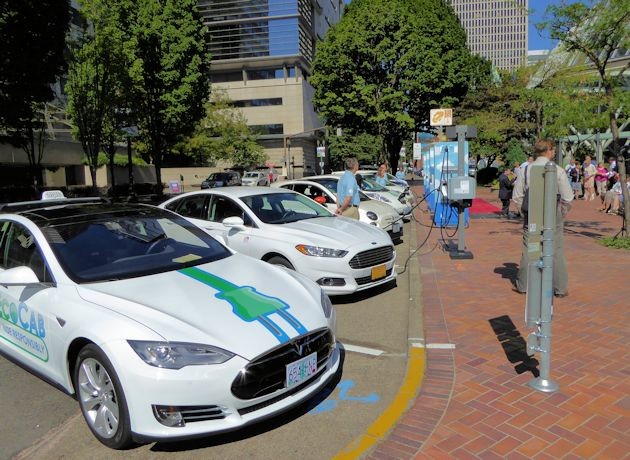 The 2015 NWAPA Drive Revolution event took place in conjunction with the opening of the new Electric Avenue quick-charging stations in front of the PGE headquarters in downtown Portland.

Electric Avenue features six charging stations, including four universal quick chargers that can recharge a typical EV in 30 minutes. The facility replaces the original Electric Avenue, which was located less than a mile away on the Portland State University campus in 2011. The original Electric Avenue was a two-year research experiment in EV charging habits, but the facility quickly became an essential part of Portland?s transportation infrastructure. All the charging stations saw regular daily use, and drivers often lined up to use the single quick-charger on site.

?We?re pleased that our EV driving customers and visitors have a place to charge up as they visit downtown Portland.? said Jim Piro, PGE president and CEO. ?Oregonians are committed to sustainable practices, and they are excited by the possibilities offered by electric transportation.?

After driving all the entries and talking to manufacturer?s representatives, here are my brief impressions about the participating vehicles. Most of vehicles are 2015 models, with the exception of the Nissan Leaf which is a 2014, but is unchanged for 2015 and the Hyundai Sonata Hybrid, Mitsubishi i-MiEV and Toyota Mirai which are 2016 models. The EPA fuel economy ratings are for city/highway/combined miles per gallon or miles per gallon equivalent for electric vehicles and some hybrids. The pricing is for the cars as tested plus many of the cars qualify for the federal $7,500 tax credit and in some areas local incentives. 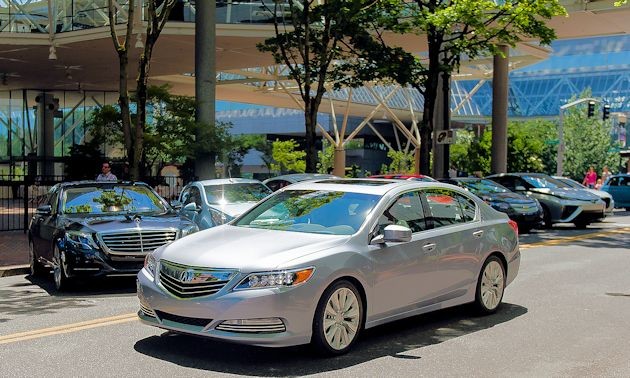 Acura RLX Sport Hybrid Limited ? I voted for the RLX, because it was one of the smoothest most seamless cars I had driven all day. Sport Hybrids are designed more for performance than for fuel economy but they do make minor gains in fuel economy. RLX is powered by Acura?s award winning 3.5-liter direct injection V-6 and uses an electric motor-integrated seven-speed dual clutch transmission for the electric assist. The engine/transmission combination creates a total 377 horsepower driving all four wheels and it?s capable of a 5.3 second 0 to 60 mph run. The EPA rates it at 28 MPG city/ 32 MPG highway and 30 MPG combined. $66,870. 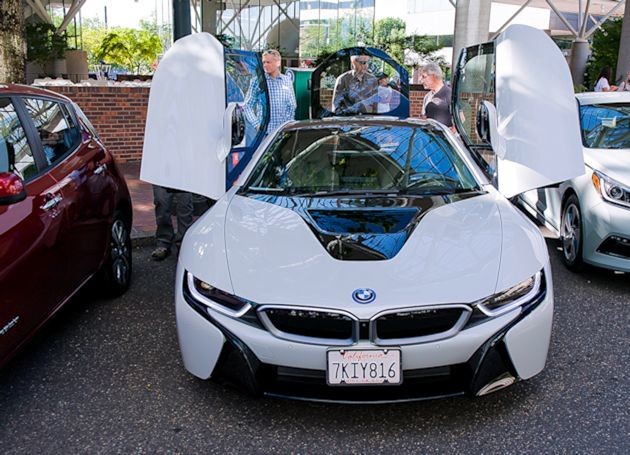 BMW i8 ? This remarkable sports car is distinctly different and very much looks the part especially with its gull-wing doors. The i8 was the fastest car in the group making a 0 to 60 mph run in only 3.6 seconds. It?s all-wheel drive and is powered by a 228-hp turbocharged three-cylinder gasoline engine and two electric motors which combined produce 357-hp. The low slung two-seater is extremely difficult to get in and out of, but once inside it?s very comfortable. The plug-in hybrid has fuel economy listed at 76 MPGe city and 43 MPGe highway with combined electric gas power of 28/29 MPG on gasoline alone. The car is unbelievable sophisticated and this test car was the first to have a new Enlighten technology that links the car to traffic signals giving it the ability to save fuel by pacing when traffic lights change. (Watch this space for more on the Enlighten technology.) $150,095. 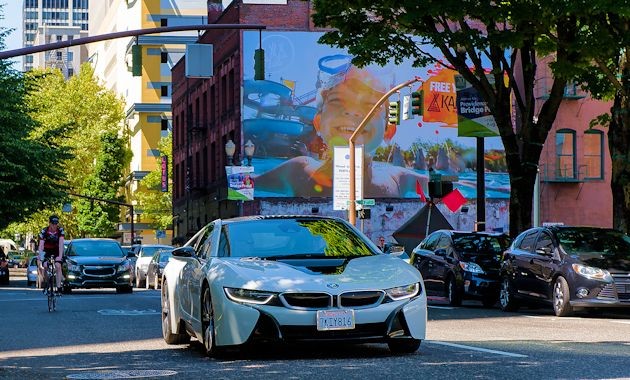 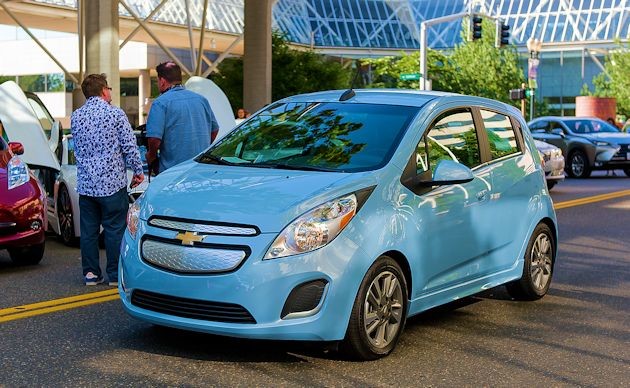 Chevrolet Spark EV ? The Spark is the essence of an all-electric vehicle simple, economical and inexpensive. The little four-door is agile and quick making it very fun to drive. It also comes with a full load of the latest safety equipment including 10 airbags. The Spark uses a 140-hp electric motor producing a massive 400-lb.ft. of torque. It has an average range of 82 miles and the EPA rates the MPGe at 128/109/28. $27,135. 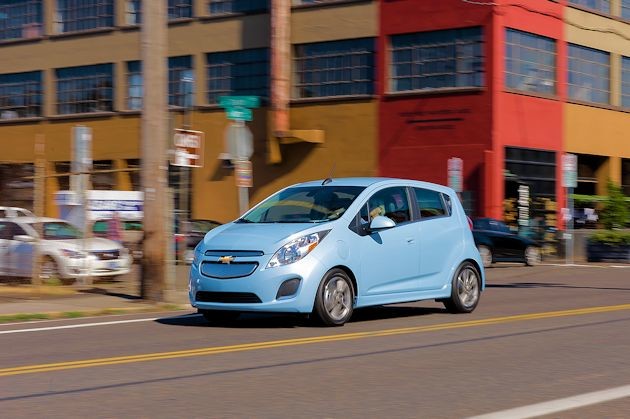 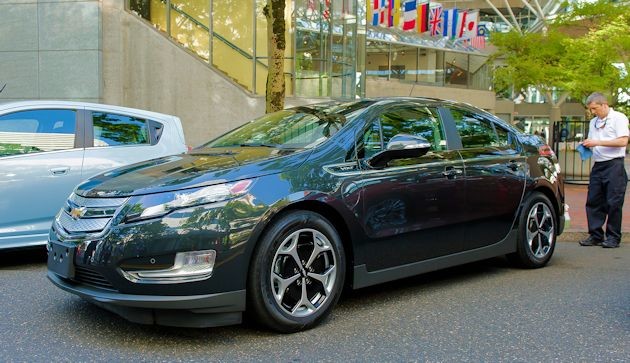 Chevrolet Volt ? The 2015 Chevrolet Volt is a carryover from previous models, unfortunately the all new and significantly improved 2016 model was not available for this event. The Volt is powered by a 149 hp electric motor and has a range of 38 miles before the range-extending 1.4-liter gasoline engine starts to recharge the battery. EPA fuel economy is listed at 98 MPGe combined city/highway on electricity alone and 37 MPG combined when the gasoline range extender is operating. $39,425. 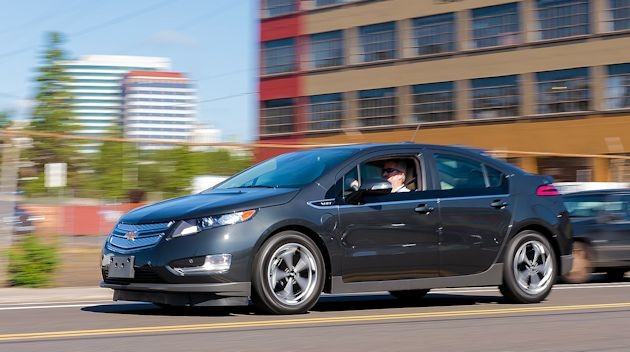 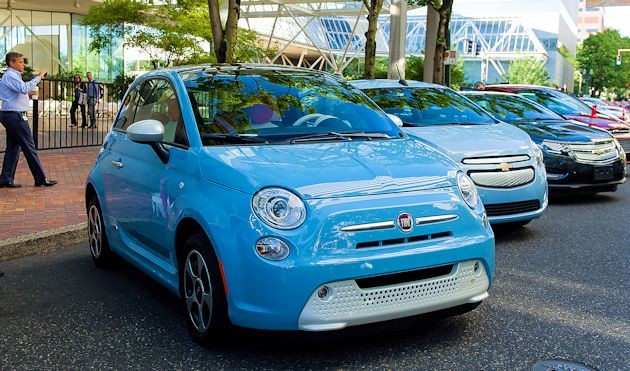 Fiat 500E ? The electric version of Fiat?s 500 feels very natural as an electric car with smooth and very quiet operation. The Fiat gets high marks for design and simplicity, both factors that make it fun to drive. It has a 111-hp electric motor. The two-door hatchback has an average range of 87 miles. EPA fuel MPGe numbers are 122/108/29. $34,375. 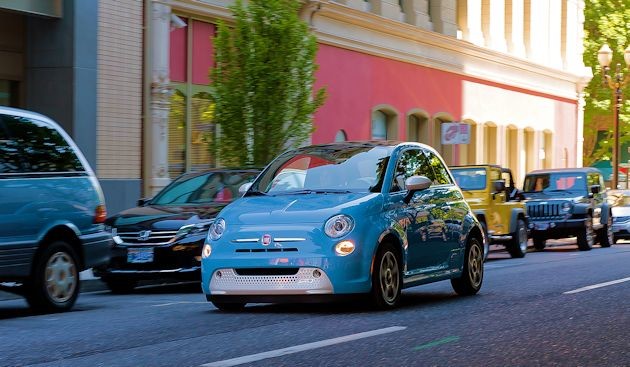 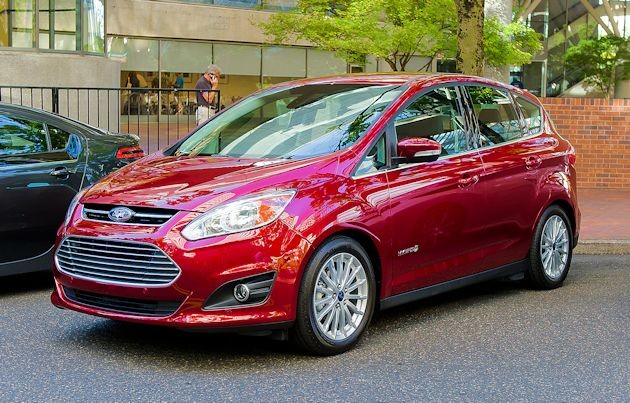 Ford C-Max Hybrid ? C-Max comes in two variations, a hybrid and plug-in hybrid. I drove the hybrid for the ?Drive Revolution? and a full review of the C-Max is upcoming. The front-drive four-door hatchback is powered by a 141-hp 2.0-liter Atkinson-Cycle four-cylinder gasoline engine which combine to produce 188 hp driving the front wheels through a CVT (continuously variable transmission). The EPA rates the C-Max at 42/37/40. $31,390. 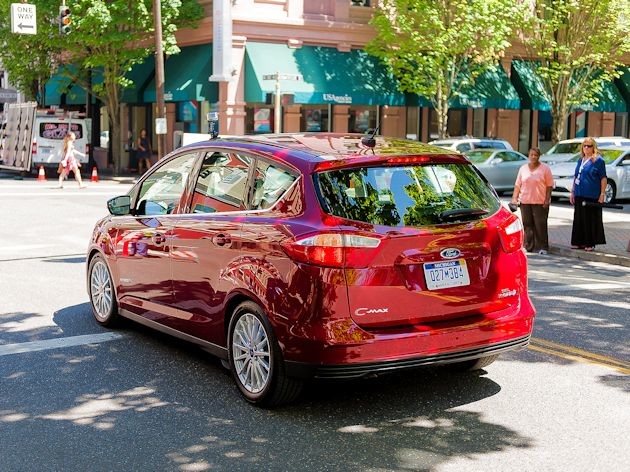 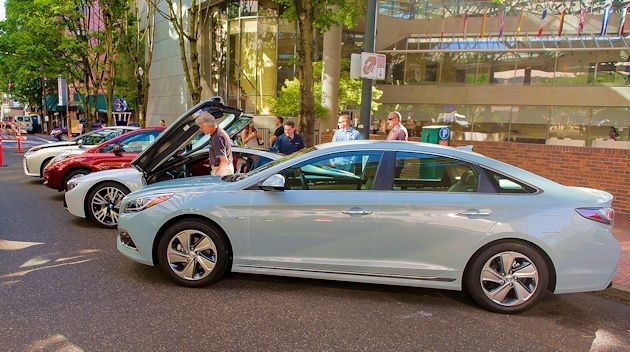 Hyundai Sonata Hybrid Limited ? The Hybrid version of Hyundai?s Sonata sedan is quiet, responsive and an outstanding value. I drove the Hybrid limited in the Drive Revolution event and have driven it since for a week at home since then ? my wife, Barbara, and I will have a full review coming soon. The Sonata uses a Nu GDI four-cylinder gasoline engine (2.0-liter, 154-hp) coupled with a six-speed automatic transmission. Combined with the electric engine the total horsepower is listed at 193 hp. The Sonata is capable of speeds of up to 75 mph on the electric engine alone. Fuel economy is listed at 39/43/41. $30,925. 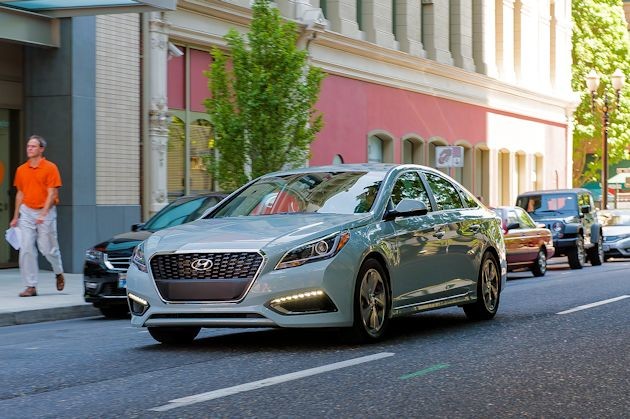 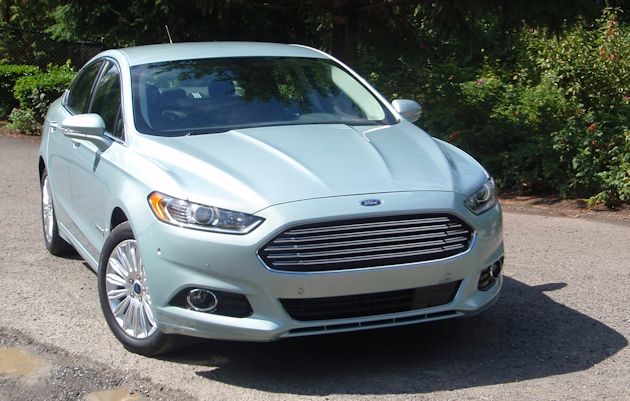