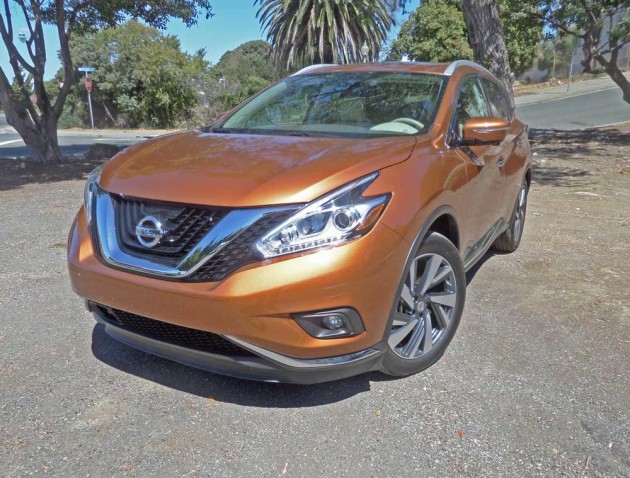 The Nissan Murano, Nissan?s popular flagship crossover entered its third generation with a virtual brand renaissance for the 2015 model year lineup. The first generation Murano bowed in 2003, with the second generation making its debut in 2009.The new Murano serves up an impressive range of choices in trims and equipment, all displaying an exterior influenced by the bold Resonance Concept vehicle, but with a refined intensity. The new interior is on the order of a social lounge. The styling, both inside and out breaks out of the ?cookie cutter? mold, carrying Nissan?s design direction into the future, featuring a new ?V?-Motion front end, traditional boomerang light assemblies front and rear. A dramatic, unique jet-inspired dynamic floating roof emphasizes the Murano?s sleek profile, while improving the aerodynamics with a drag coefficient of 0.31. 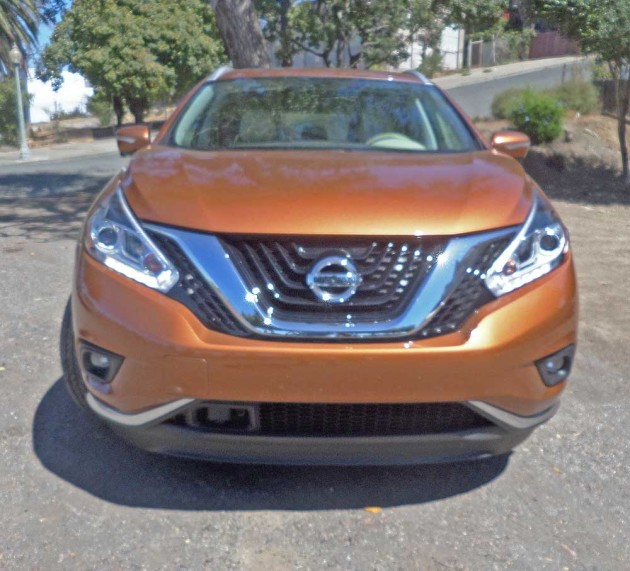 Base level trims: S and SV are expected to account for roughly 30 percent of the new Murano?s take rate, whole the upper trim levels ? SL and the top-of-the-line Platinum are anticipated to account for the remaining 70 percent. All models are powered by a transversely, front mounted engine – Nissan?s VQ35DE 3.5-liter, DOHC, 24-valve V6 with Continuously Variable Timing Control System. The engine delivers 260 horsepower at 6,000 rpm, while developing 240 pound feet of torque at 4,400 rpm. Motive force reaches the driving wheels through Nissan?s advanced Xtronic Continuously Variable Transmission (CVT). The Murano?s towing capacity is 1,500 pounds, and all models are available in either Front-Wheel Drive or All-Wheel Drive, which is an extra $1,000. Sales between drive configurations are expected to be evenly split. 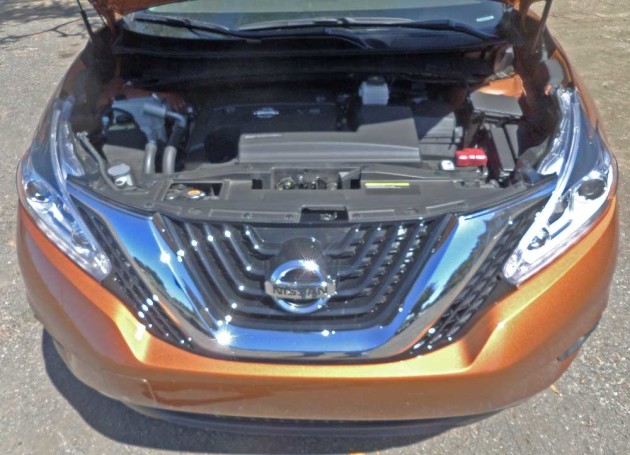 Base pricing will range from $29,560 for a base model S FWD to $40,600 for a loaded Platinum AWD model. Designers working to capture the breathtaking spirit and artistry of the first Murano, began by concentrating on the new vehicle’s sculptural aspects. Breaking the usual order of sketching, computer renderings and then clay modeling, the Murano team started by working with small three-dimensional clay forms, exploring organic shapes and volumes. This process helped in narrowing down a new Nissan design direction focused on a lightness of form and efficiency. The prominent glass areas of the first-generation Murano were retained and expanded with the new design, including the use of its jet-inspired roof and D-pillars that appear disconnected from the roof, helping to visually lighten the cabin. The result is a unique floating feeling that can be recognized even from a distance. 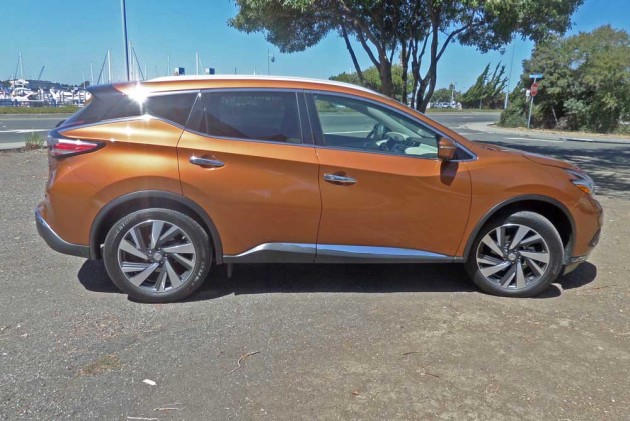 Murano’s sculptural bodysides created an engineering challenge, especially in the strong curvature of the rear fender stampings. While similar in dimensions to previous generation Muranos, the new design is slightly lower, wider and longer, enhancing the aerodynamics while not compromising the desired crossover height and stance. The lower rocker panels offer a balance of aerodynamics and ruggedness. Other details, such as the active grille shutter, fender lip moldings, rear bumper surfacing, rear tire deflectors and integrated rear spoiler combine to achieve an improvement in overall aerodynamics. 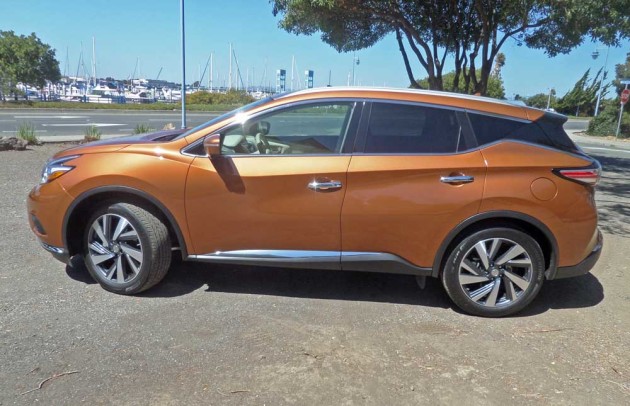 The new Murano came to fruition after less than 24 months form the unveiling of the Resonance concept vehicle and tips the scale at 145 pounds less than its predecessor. 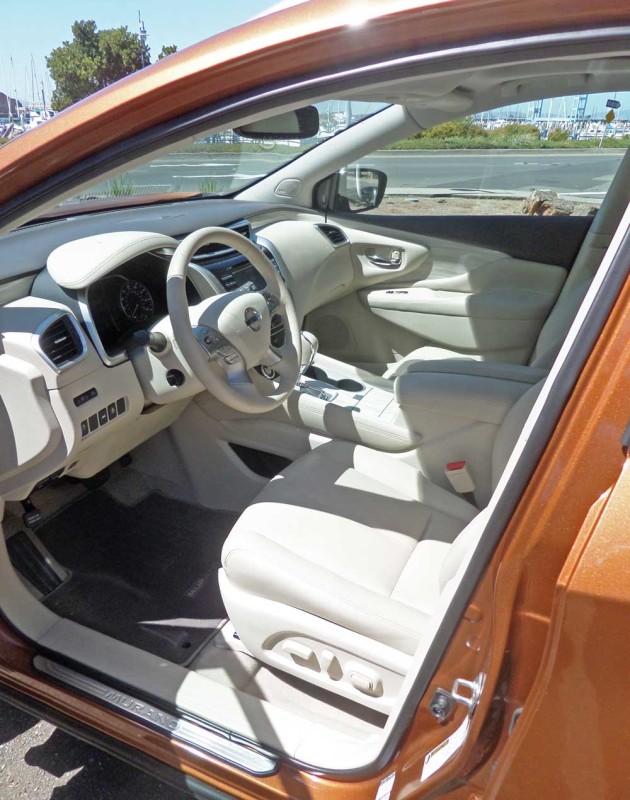 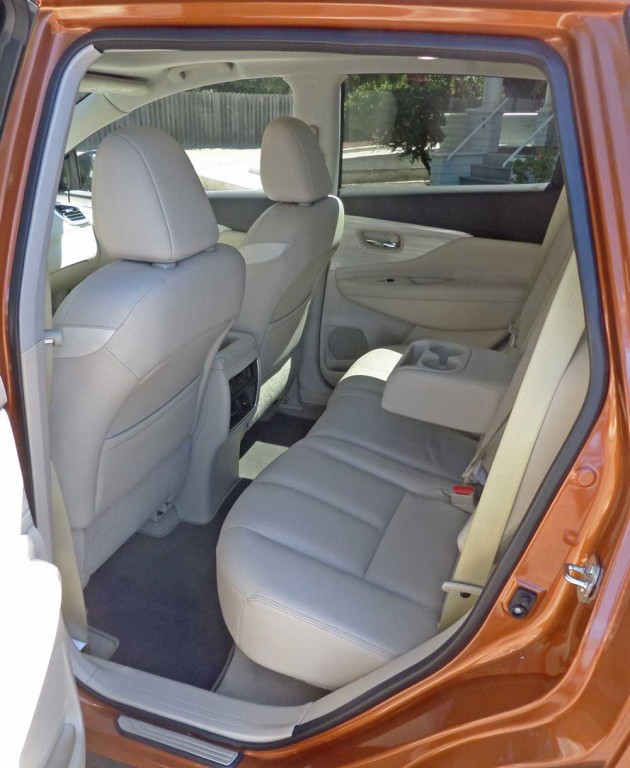 Moving to the inside, the feeling of an upscale social lounge creates an inviting and comfortable atmosphere. The instrument panel height is now lower than previous Muranos, and centered between the outer wings is a large information and control center with an available 8.0-inch color display featuring multi-touch control. Simplicity is key, with the number of audio and navigation switches reduced by 60 percent ? from 25 to 10 ? for optimum user-friendliness. 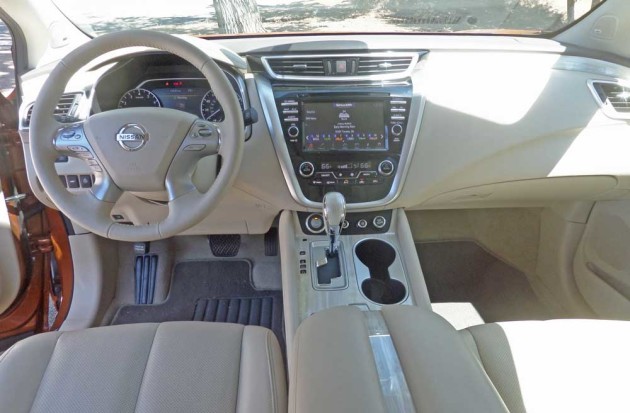 Overhead, the available Power Panoramic Moonroof delivers an open, airy feeling. The moonroof has a 40 percent longer sliding length for a 29 percent larger opening than the previous generation.
The console includes a compartment for rear occupants’ smartphone, and there?s also an available USB port for the rear seats allowing for control of music and display, along with ample storage areas and compartments throughout the interior. 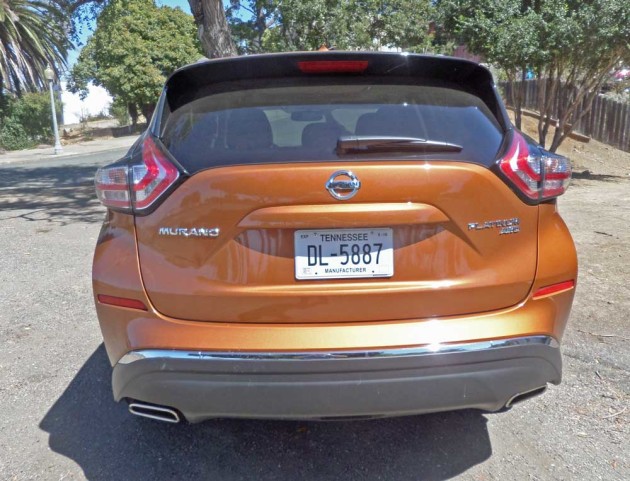 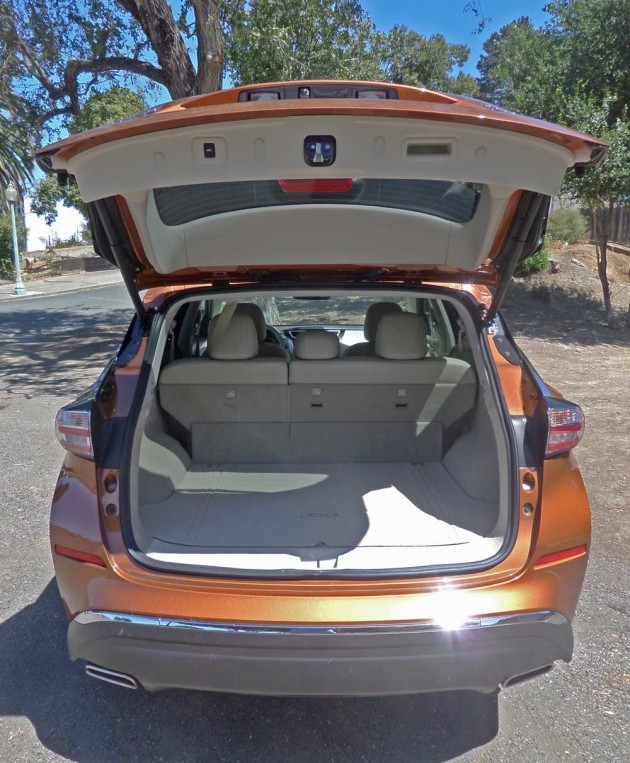 The Murano’s cargo area has been reconfigured to provide an estimated best storage space in the segment with the seats in their upright position. The rear cargo area accommodates four large suitcases, while the rear seats fold flat for additional cargo. An easy rear seat release and available power rear seat return, converts from people hauler to cargo transport or back in a matter of seconds. All configurations may be accomplished from the back. 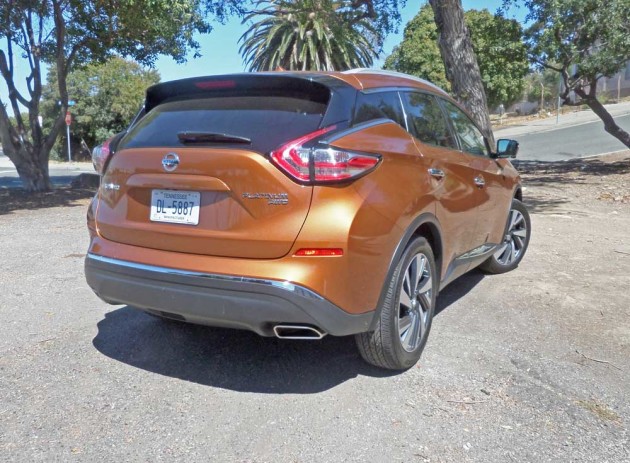 Safety considerations are addressed as well with Murano incorporating up to four cameras (front, rear, two side) and three radar sensors (one front, two side) providing input to a range of available technologies, including Blind Spot Warning, Predictive Forward Collision Warning, Forward Emergency Braking and Intelligent Cruise Control. Other features include: Rear Cross Traffic Alert ; an available class-exclusive Around View? Monitor, with Moving Object Detection. All combine to help not only safety, but driver confidence and security.

During the national media preview, my driving partner and I first began our ride and drive in a 2015 Nissan Murano in Platinum trim and All-Wheel drive configuration. The exterior sported an Arctic Blue metallic finish and came with a Brown interior. The base price was set at $44,600, while the AWD, Tech Package and Destination and handling bumped the final count and amount to $43,745. Next up, we piloted a FWD Platinum Murano, appropriately finished outside in Pacific Sunset metallic (appropriately, since our drive route took us from California?s Napa Valley to the Pacific Coast) and inside with Beige interior featuring pearlescent trim accents. It cost $42,745 since it was without AWD, and most recently I reviewed a Murano AWD version in Platinum trim with a Pacific Sunset metallic exterior finish and a Beige interior, equipped with the Technology Package, floor mats and cargo area protector with a final sticker tag of $43,955.

SUMMARY: Selecting the proper new Murano is simply a matter of choosing the color, drive configuration, and trim level, which dictates the feature content, and of course the amount that one wishes to, or can afford to spend. The powertrain is the same throughout the lineup of eight well-equipped models.

The Murano is categorized as an SUV or Crossover vehicle, and though it doesn’t have sliding side doors, it also fits the mold of a minivan in terms of size and function. In terms of its styling and design, the 2015 Nissan Murano may well be the best looking vehicle in its segment on the market today. It displays a futuristic aura with a bold and tasteful design, and looks good from virtually every viewing angle.

The performance is adequate as far as acceleration and handling goes, but there are some circumstances such as passing on a grade, where more power would certainly be a plus. The ride quality is smooth, stable and well planted, with the steering providing a positive feel.

The NASA-inspired Zero Gravity seats deliver excellent support along with a pleasing level of comfort.
Overall, the third generation Nissan Murano certainly seems to reset the standard bar level in the midsize crossover segment. The content level is impressive even in the Base S trim, while the flagship Platinum level leaves little to be desired. 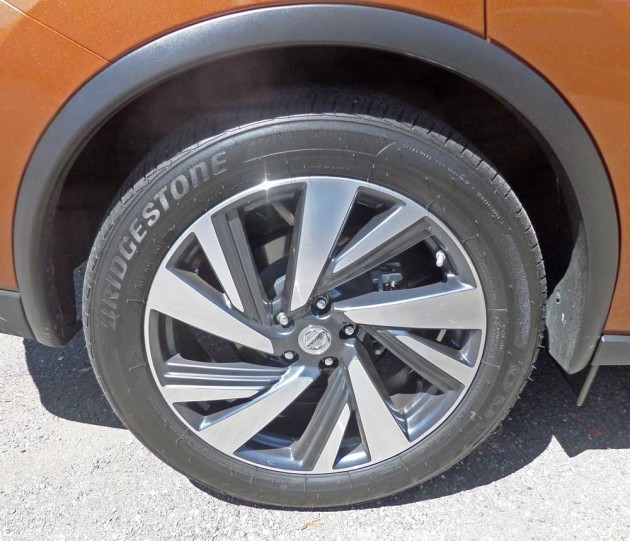 The new Murano is the first Murano (and the eighth vehicle) to be assembled in Nissan’s Canton, Mississippi plant. Murano is assembled on the same line as Xterra, Frontier, Titan and Armada. 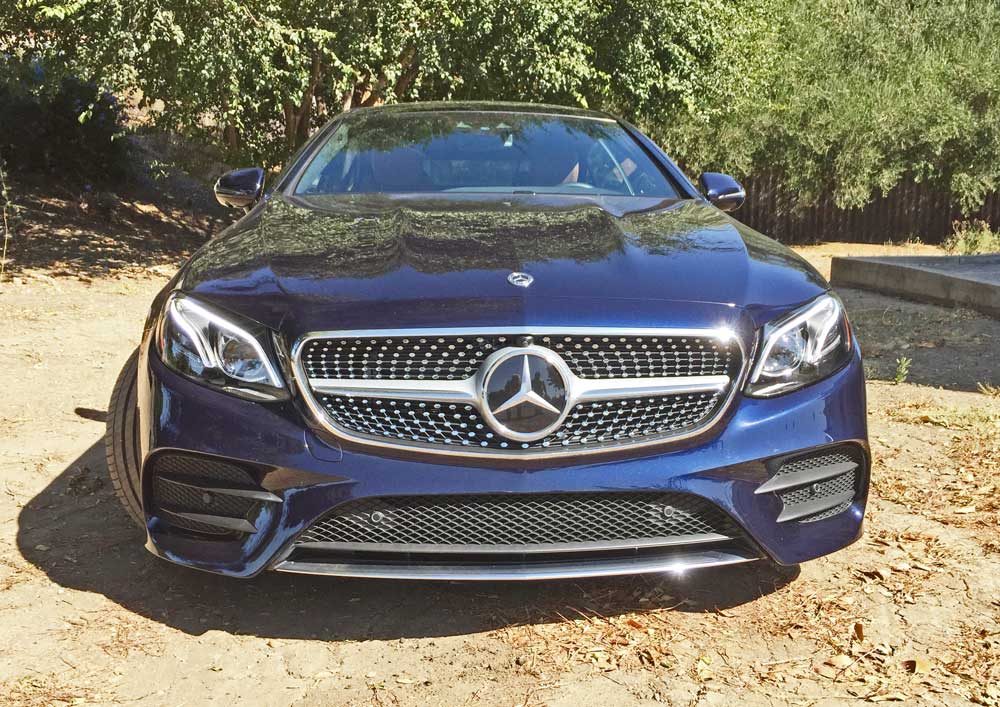