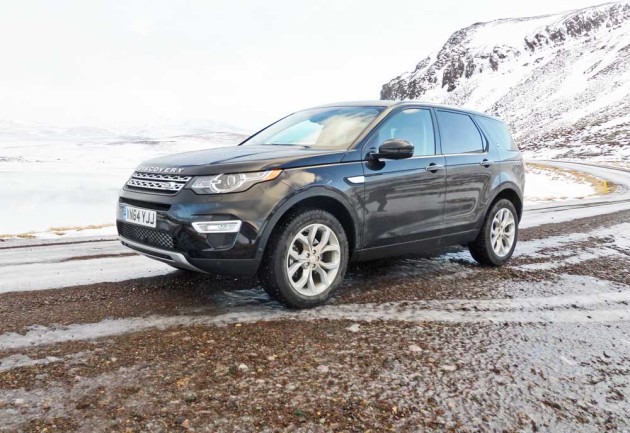 Reykjavik, Iceland – Land Rover reaches ?Above and Beyond? with the all-new Land Rover Discovery Sport, which positions itself in the leisure family of Land Rover?s three-pillar brand structure: Range Rover (Luxury), Discovery (Leisure) and Defender (Dual-purpose). 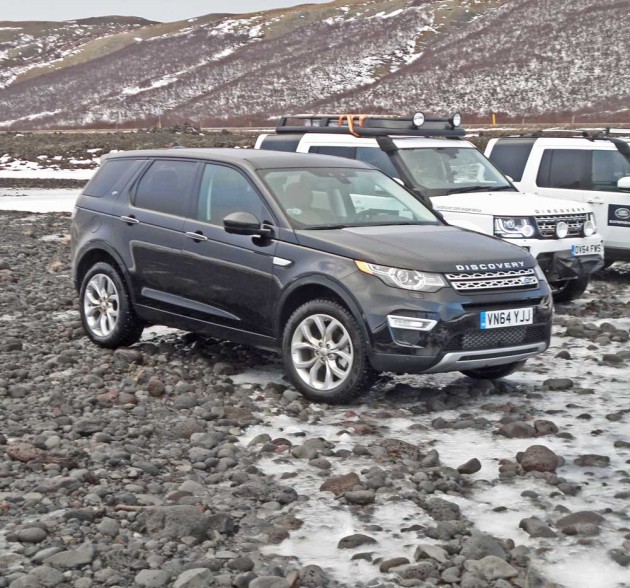 For those who find the Range Rover lineup too large and expensive, the Evoque offerings too small, and the Defender series a little too utilitarian, the new Land Rover Discovery Sport fits into an ideal place in the Discovery camp, as the world?s most versatile compact premium SUV and the first model in the new Discovery family.

The Discovery Sport marks the beginning of a new era, following 25 years of Discovery production, which began its run in 1989, with the introduction of the Discovery I ? a three door Estate which was powered by a 2.5-liter, turbocharged, direct injection, intercooled, 4-cylinder diesel that produced 111.3 horsepower at 4,000 rpm along with 195 pound feet of torque at 1,800 rpm, mated to a 5-speed manual gearbox.

The first generation Discovery ran through 1998 and virtually reinvented the 4×4 concept. The second generation began with the 1998 Series II and ended in 2004, followed by Discovery 3 through 2009, which was replaced by the Discovery 4 (or LR4 here in the US and in the Middle East). 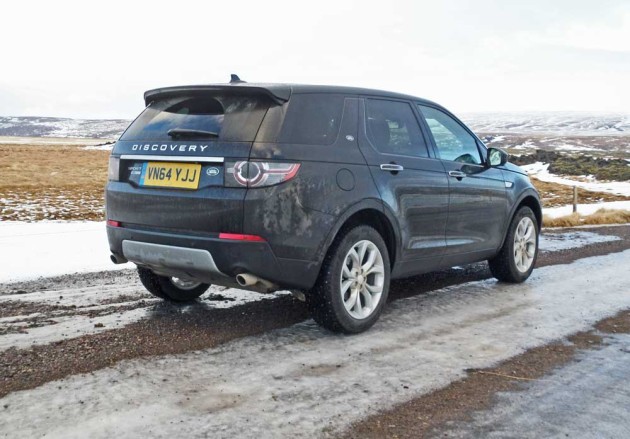 The new 2015 Land Rover Discovery Sport will be available in three levels of trim: SE, HSE and HSE LUX, with a limited production, commemorative Special Edition XXV. Standard seating is for five, with an optional 5+2 seating arrangement available. 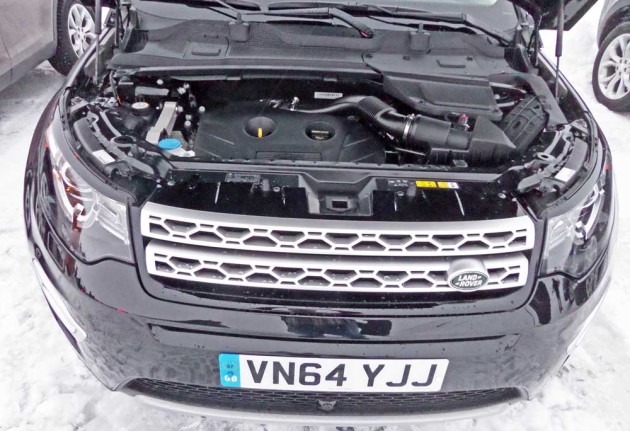 Motive force for the US will initially come only from a 2.0-liter (1999 cc ? 122 cu.in.) turbocharged 4-cylinder, gasoline Direct Injection engine with spark ignition and dual independent variable valve timing that produces 240 horsepower at 5,800 rpm and 251 pound feet of torque at 1,750 rpm. Power reaches the driving wheels via a ZF 9HP48 Nine-speed automatic transmission and a standard driveline on-demand Gen 5 Haldex coupling, or an Active Driveline with On-demand twin couplings featuring driveline disconnect. Global markets will also offer two 2.2-liter diesels with varying power levels. Both diesel engines may be coupled to either a 6-speed manual transmission or the 9-speed automatic. 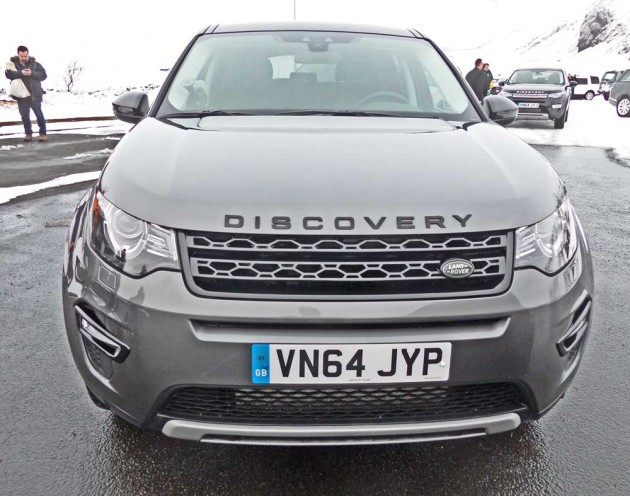 Visually the new Discovery Sport begins with unmistakable signature features such as a clamshell bonnet or hood and a distinctive two-bar grille with hexagonal mesh. Upper trim levels replace standard halogen headlamps with Signature (xenon and LED) or Signature Plus units with adaptive cornering technology. The profile is dynamic, and the sharply angled windscreen and ?A? pillars flow gently aft to a reverse angled rear hatch, capped by the tapering roof line and. ?B? and ?D? pillars are blacked out with the strong body-colored ?C? pillar sloping forward. Bumpers are bold and athletic, while out back, the functional spoiler and rugged skid plate flanked by split dual exhaust outlets hint at the vehicle?s prowess. A full panoramic roof with a dark tint and a special surface treatment for solar protection enhances the cabin?s spacious feeling. A power-retracting shade provides shielding from the sun. 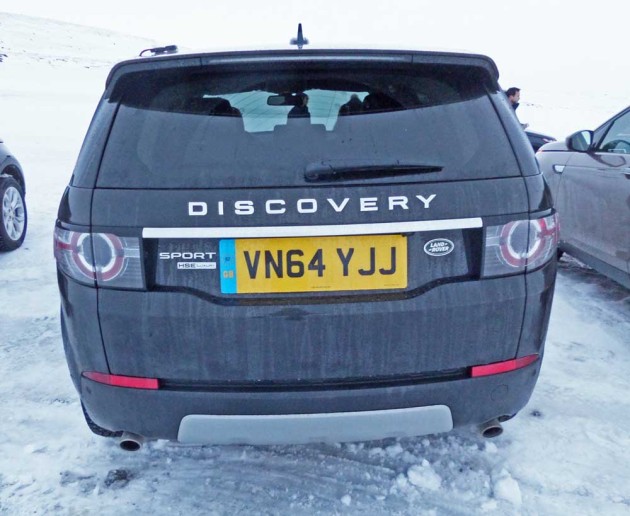 Circular daytime running lights up front and tail lamps are punctuated at four equal intervals representing the four point of the compass. Overall, the Discovery Sport displays a new sporty and dynamic design language that enhances the level of refinement and represents an exemplary balance of design and functionality in an aerodynamic package. The shoulder and rocker character lines serve to skillfully pull the pronounced wheel well arches together. 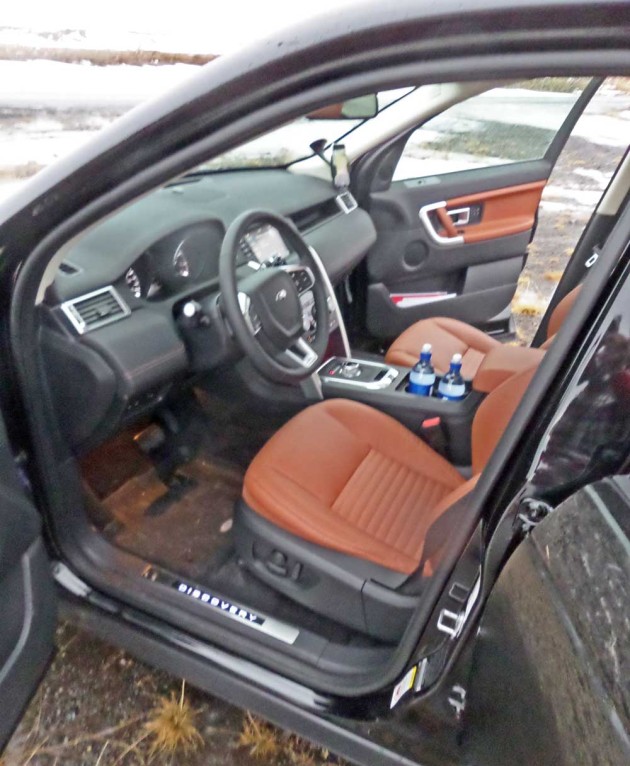 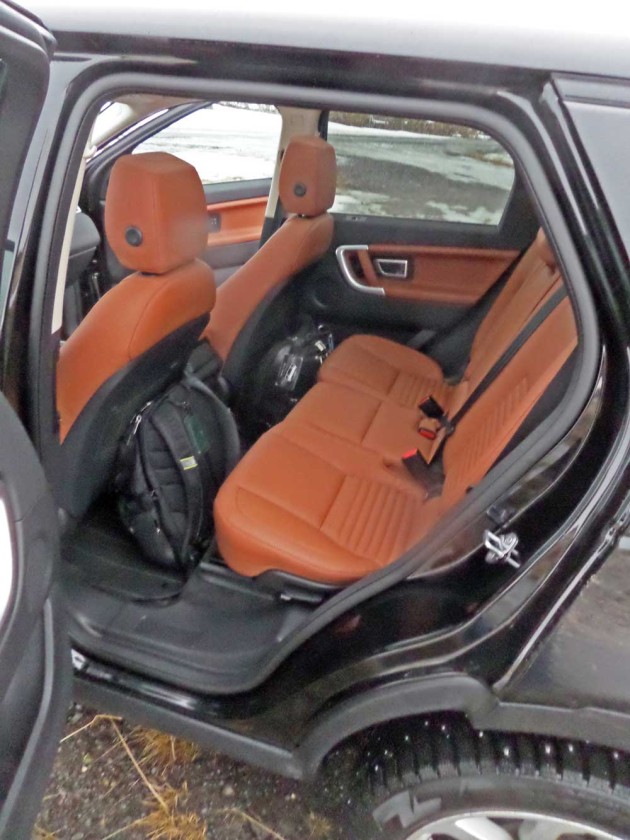 Inside, the cleanly designed interior to provide not only a functionally versatile space, but also a comforting ambiance. Controls are logically positioned and the three-spoke tilt and telescopic multi-function steering wheel frames the modern instrument cluster with a central 8-inch color TFT display. Seating is arranged stadium style and there is an available tilt-and-slide functionality and a 60/40 split adjustment. Second row seats both slide and recline. There are six USB charging points along with four 12V power points, and available dual zone climate control, with independent air-conditioning controls and vents placed in the ?B: and ?C? pillars. There is also plenty of storage conveniently placed in the doors and console. The infotainment system is advanced featuring smart phone similarities. 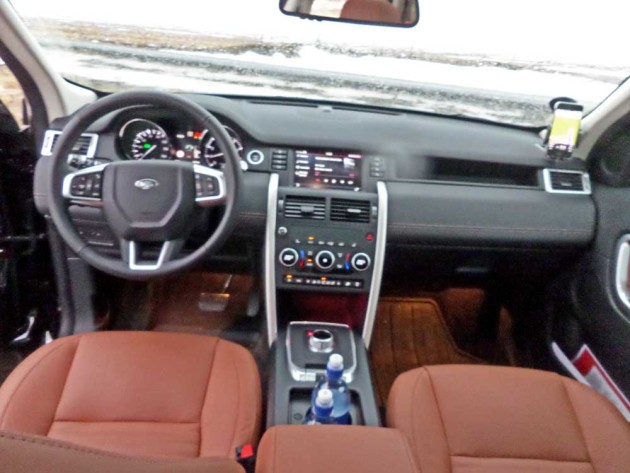 Pre-volume-production vehicles were provided for the majestic Icelandic global launch. All were in HSE Luxury trim, but with varying exterior colors and interior tones. My test Land Rover Discovery Sport wore an exterior finish of Santorini Black and came with a Tan Windsor leather interior. The base sticker was set at $45,570 before adding the Destination and Handling charge and optional pricing. Options included on my tester were: Cold Climate Pack, Adaptive Dynamics with Dynamic mode, Vision Assist Pack, Dynamic Drove Line, Lane Departure Warning, Navigation Center, Intelligent Emergency Braking and Perpendicular Park Assist . HSE is expected to be the volume sales leader and average transaction pricing is expected to be between $38,000 and $40,000.

SUMMARY: The 2015 Land Rover Discovery Sport is the real deal for off-road travel in any extreme. It is capable of wading in a depth of up to 600mm, with an approach angle 25 degrees, a Breakover angle of 20 degrees and a departure angle of 31 degrees. The standard Terrain Response System is a blessing in challenging off road scenarios, with the ability to select the appropriate settings for a variety of surface conditions. There are really too many standard features to list here, but basically, if it?s not included in the inventory, chances are that you really don’t need it. 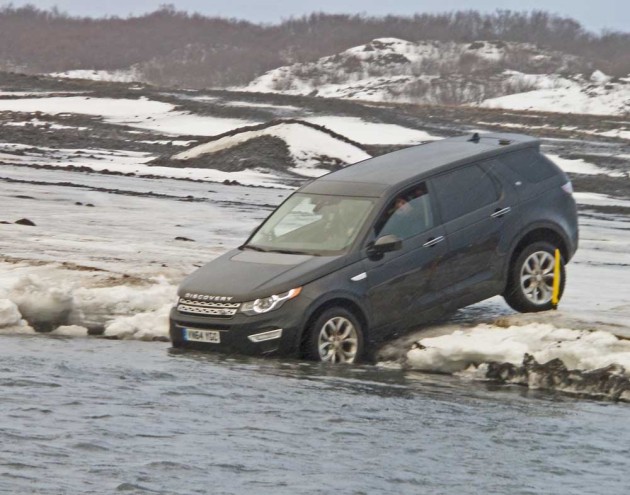 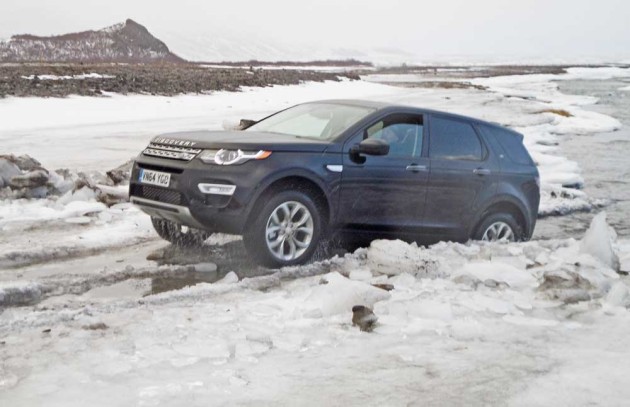 During the global launch we traversed Iceland?s Golden Circle, taking in geysers, geothermal sites, fjords and crossing rivers. Ice covered roads were the norm in rain, snow and very little sun (with roughly only 6 hours of daylight every 24 hours). Special studded Ice Zero tires by Pirelli enhanced the Land Rover Sport?s normal capability, but it was still necessary to exercise caution, since it is impossible to override the laws of physics as a couple of colleagues learned, while still managing to escape harm. 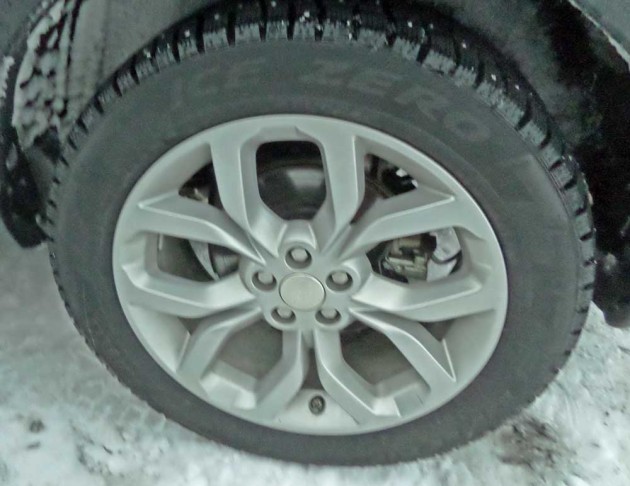 This latest Discovery model has indeed come a very long way since its beginning. It is smoother, more powerful and more stable than any of its predecessors. It is a joy to drive in extremely challenging situations, with complete confidence. Acceleration is readily responsive, steering is spot on with a solid feel and centered control, and the ride comfort is impressive. 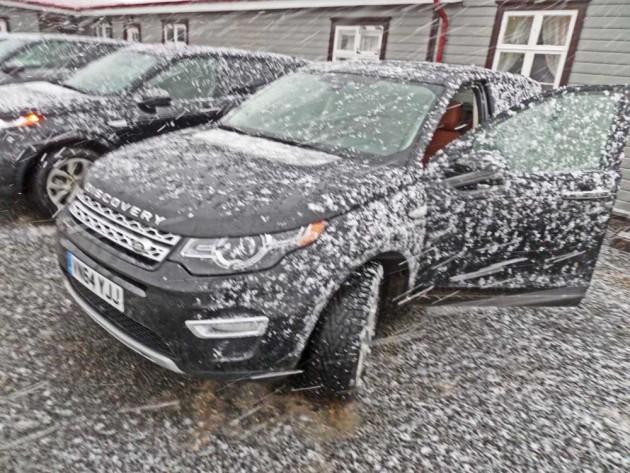 It is entirely possible to obtain and enjoy a 2015 Land Rover Discovery Sport at a price point of less than $40,000 with virtually all of the capability of the Range Rover. Is it faster? No, but off-road that really doesn?t enter the equation ? finesse is more important than speed. Even the Discovery Sport in its most expensive trim, fully loaded is a bargain, considering its content level.

The 2015 Land Rover Sport is an outstanding compact premium SUV that truly reaches ?Above and Beyond?. 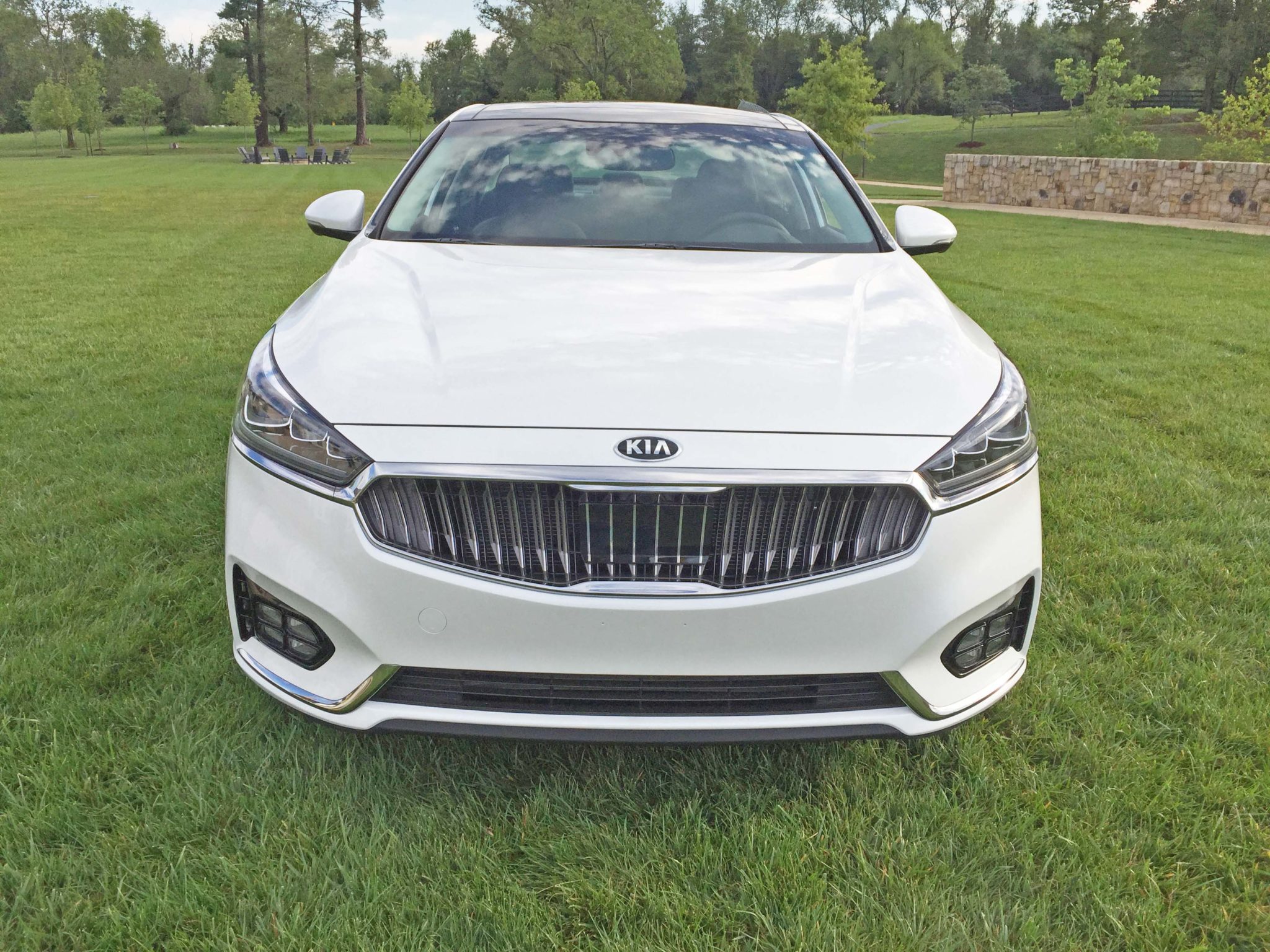 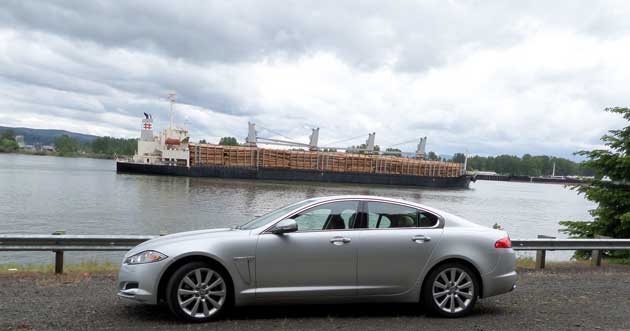