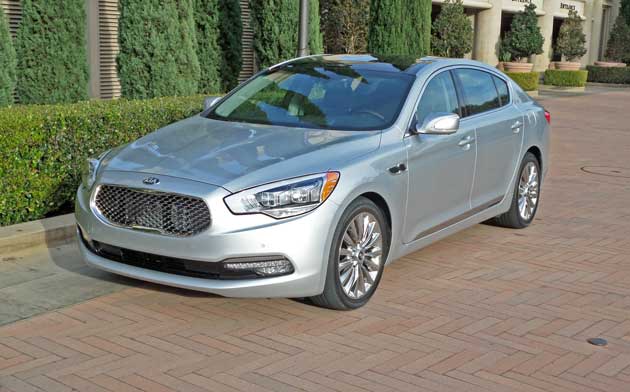 The Kia K900 is unquestionably a wonderful luxury automobile, as is the Hyundai Equus, from their cousin Korean company. The 2015 Kia K900 answers the dealer?s call for an upscale luxury vehicle in the lineup. After all, nowadays, it seems that every automobile manufacturer strives to provide a vehicle for every possible niche.

Known simply as the K 9 in its Korean homeland and as the Corus in other global markets, the Kia K900 is certain to face the same challenge faced by the Hyundai Equus (name not withstanding) ? that of the consumer?s willingness to part with the required monetary outlay for marques that appear lower on the recognition scale for expensive luxury sedans. Incidentally, the model designation decision was based upon the fact that focus groups tended to associate luxury craft with alphanumeric nomenclature, according to internal sources.

That having been said, the 2015 Kia K900 is worth every penny, and In fact, may be superlative to some other more familiar luxury brands that are currently available in today?s world marketplace. Its purpose is to elevate the brand, which it is obviously destined to do. Kia is already recognized as one of the Top 100 brands in the spectrum of product rankings. 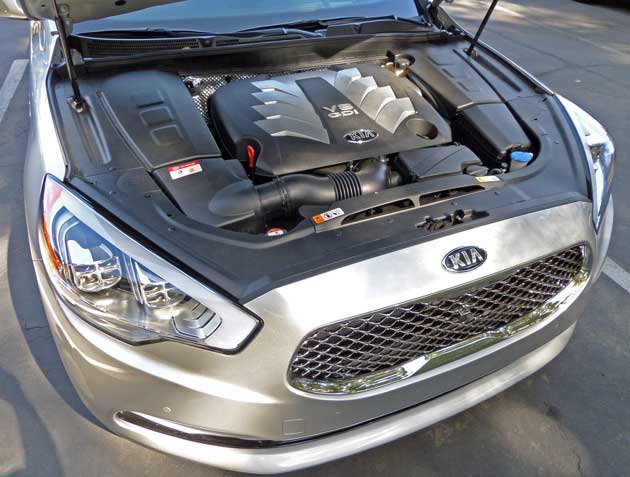 The Kia K900 will be available with two engine variants, and in two trim levels. In addition to the base model which will start in the neighborhood of $50,000 and will be powered by a 3.8-liter V6 that delivers 311 horsepower along with 299 pound feet of torque, there will be the flagship Kia K 900 in Luxury or VIP trim that?s powered by a 5.0-liter, DOHC, 32-valve, Gasoline Direct Injection V8 that puts out 420 horsepower at 6,400 rpm, while also developing 376 pound feet of torque at 5,000 rpm. It?s the first V8 to be offered in a Kia sedan. The Kia K900 VIP model starts at $65,500 (add $900.00 for Destination and Delivery for both models) and comes with a 3-year, 37,500- mile complimentary scheduled maintenance program at participating dealers, with the use of a Kia Cadenza during their service visit.

Both the longitudinally oriented, front mounted V6 and V8 will modulate motive energy to the rear wheels via an 8-speed, shift-by-cable automatic transmission. Sadly there are no paddle shifters initially available, but we?re told that that feature is waiting in the wings, and will appear soon, which should add to the car?s appeal for younger targeted buyers looking for more sport with their luxury. 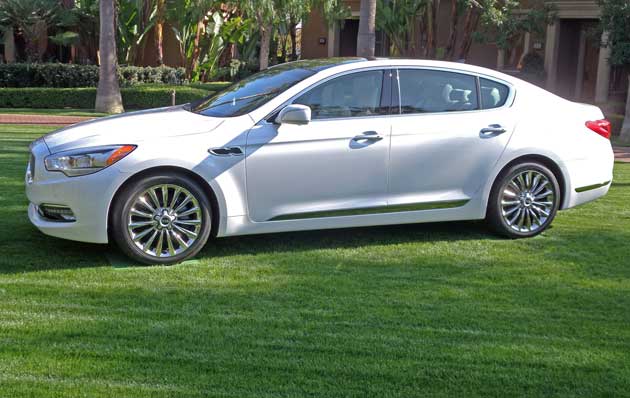 Visually, the Kia K900 serves up a considerable and elegant road presence. The silhouette displays a long, lean and graceful image with its sharply raked greenhouse and subdued character lines along the doors, to the raised rear deck. Up front, the K900 leads off with Kia?s signature grille (somewhat Jaguaresque in nature), which is positioned nearly vertically in the smoothly contoured front fascia. A chrome halo surrounds the dark chrome inner elements, hinting at the power behind it. Smoothing underbody panels mounted beneath the nose, engine bay and cabin aid in reducing drag and improving airflow efficiency. The car rides closely over the 19-inch wheels and tires, adding to its sporty persona. 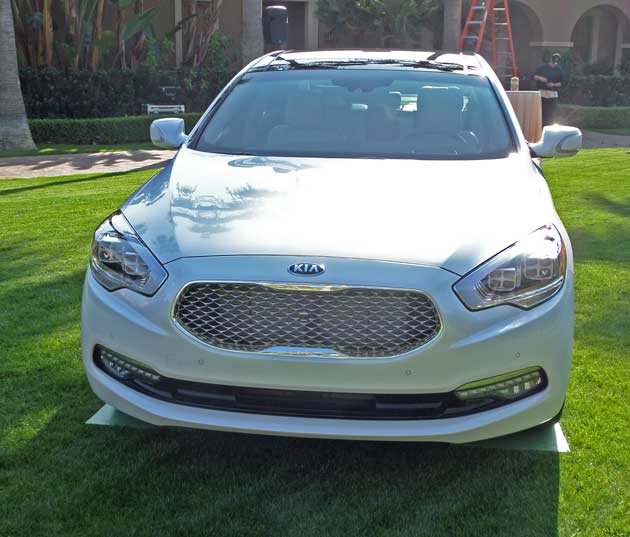 Standard on the V8 are adaptive LED headlights. With 16 LED bulbs providing powerful, natural light for enhanced luminosity, the beams, which adjust to follow the bends in the road, shimmer beneath crystal clear lenses that pull back deeply into the front fenders. Soft-glow LEDs frame the multi-faceted headlights. Mounted low and at the far corners of the nose are sleek LED daytime running lamps and LED fog lights. Similar LED technology can also be found at the rear of the K900. The trapezoidal taillamps offer defused LEDs for the brakes and bright LEDs for the turn signals. A chrome bezel cuts high across the K900?s powered rear deck lid, lending visual width and adding elegance. Standard power and heated rearview mirrors integrate auto dimming, LED turn signal indicators and Blind Spot Detection System in a smooth, aerodynamic form that reduces wind noise. The rear bumper is accented with fully integrated dual chrome-tipped exhaust ports mimicking the taillamp shape. 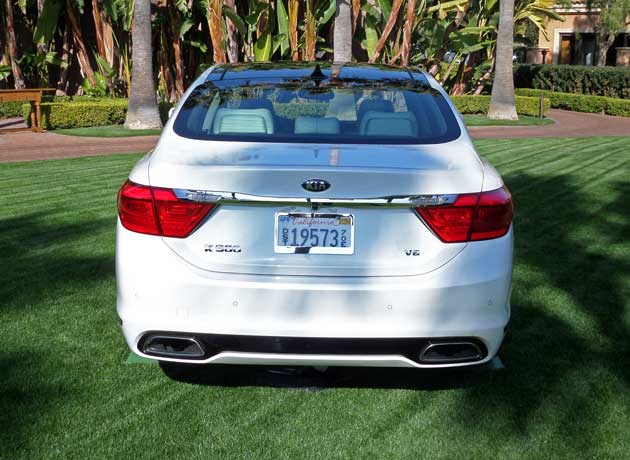 Moving to the inside of the all-new K900, ?a sense of luxuriously appointed cabin?s opulent elegance is instantly realized. The three-spoke leather-wrapped steering wheel is substantial, featuring controls for audio, cruise control, entertainment, and vehicle information. A heated wheel is standard on the V8 and optionally available on the V6. The V8 K900 comes with standard Nappa leather, while standard high-grade leather is found throughout the cabin of the V6, which may be optioned with soft Nappa leather in black or white with contrasting piping. Soft-hue LED interior illumination is standard across the K900 line. Genuine walnut (with black Nappa leather) or poplar (with white Nappa leather) wood trim adorns the dash and door panels, complementing the richness of the interior and is standard on the V8 and available on the V6. A 12-way adjustable driver?s seat, including power lumbar support, is standard on both the V6 Premium and V8 Luxury models, and a 16-way power adjusted driver?s seat features power headrests and cushion extender for added thigh support as part of the V6 Technology Package and the V8 VIP Package. The front seats feature standard multi-stage heating and ventilation for individualized comfort in all climates. 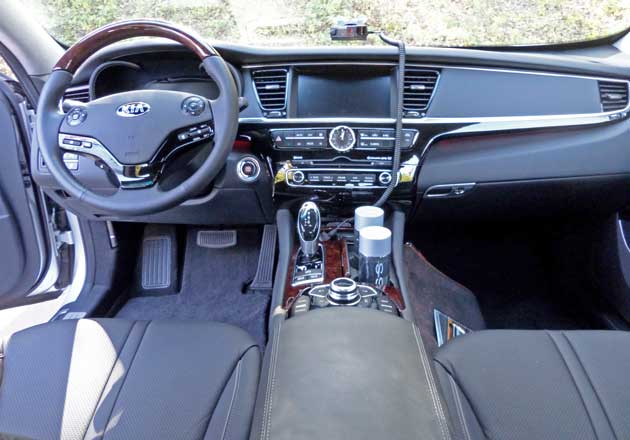 At the rear of the cabin, the K900?s executive-class accommodations continue, with standard features including multi-stage heating for the outboard seats. Accessing a panel within the center armrest, rear-seat passengers are able to control the vehicle?s ventilation system and may even fold the back cushion of the front passenger seat forward with the touch of a button. K900 passengers may also operate the standard power rear window sunshade, and retractable rear side window sunshades are standard across all models. A full-length panoramic roof with power retractable sunshade is standard on all V8 models. Opting for the V8 VIP Package takes rear seat comfort to another level. Both seats offer multi-stage heating and cooling, have the ability to independently recline and incorporate power lumbar support and lateral headrest adjustability.
Sophisticated and intuitive technology and safety features abound in the 2015 Kia K900. Controls and switchgear are positioned for easy accessibility. 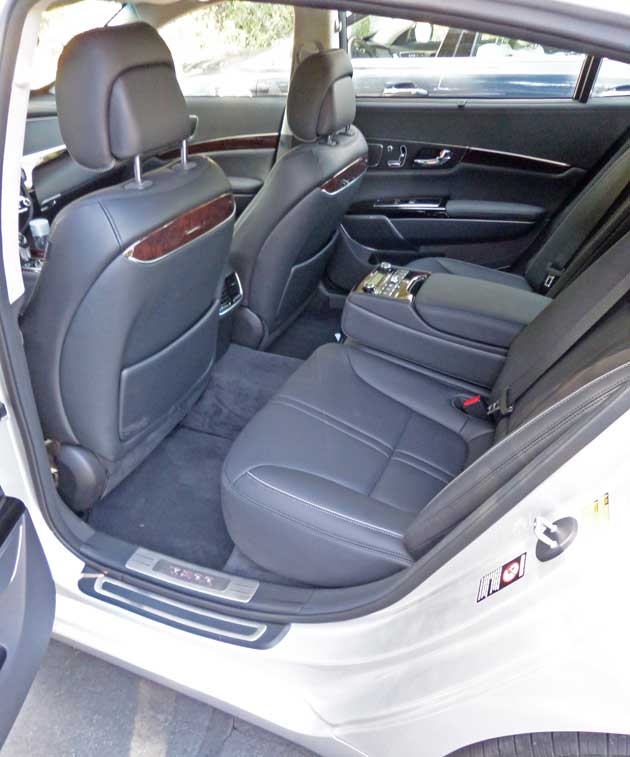 The Kia K900 V8 VIP offers the largest TFT instrument panel ever offered in a Kia vehicle. At 12.3 inches, the full-color LCD screen is easy to read and easily configurable, featuring different themes depending on the drive mode selected. Also included with the V6 Technology Package and V8 VIP package is Kia?s first Head-Up Display, providing the driver information such as vehicle speed, turn-by-turn navigation, and alerts including the Blind Spot Detection System and Lane Departure Warning System. 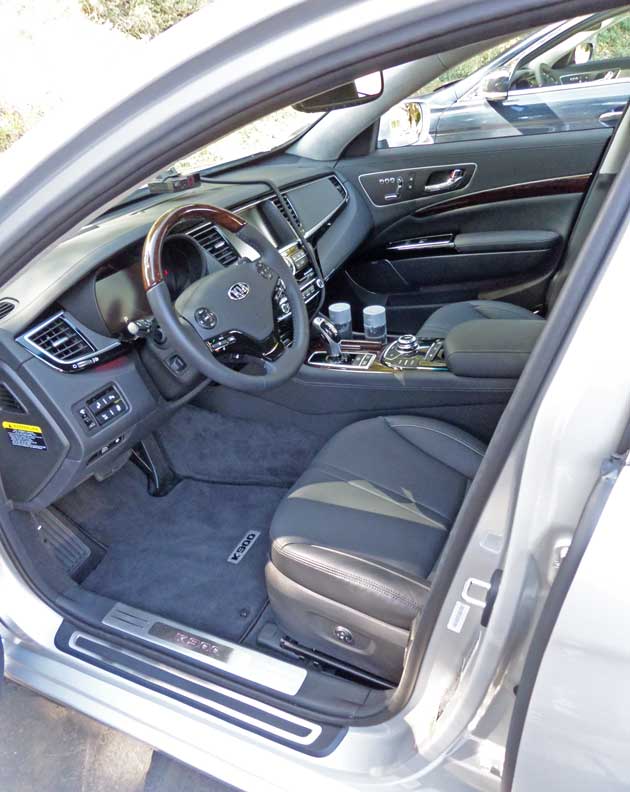 Entertainment comes standard in the form of a 900-watt Lexicon high-fidelity audio system, the most powerful and advanced system ever offered by Kia. The Lexicon system features a trunk-mounted 12-channel digital amplifier, 17 speakers, including a center channel and an inverted subwoofer located in the rear parcel shelf. The speaker arrangement is custom designed for the interior of the K900 optimizing sound quality throughout the cabin. Standard infotainment features include Bluetooth hands free accessibility, HD Radio, three-month complimentary SiriusXM satellite programming along with AUX and USB ports conveniently accessed through a panel in the center console.

The audio system, along with standard navigation and Kia?s exclusive UVO eServices telematics software, are all viewed through a 9.2-inch full-color screen, accessed through a new standard Driver Information System in the center console. A simple rotary knob surrounded by intuitively placed direct-access buttons, allows immediate access to the K900?s advanced systems, including entertainment and voice-command navigation functions. All K900s come standard with a power-operated trunk lid. A slim credit-card-style smart-key entry system that welcomes the vehicle owner by automatically extending the outside rearview mirrors and activating perimeter lighting is standard on all but the V6 Premium. 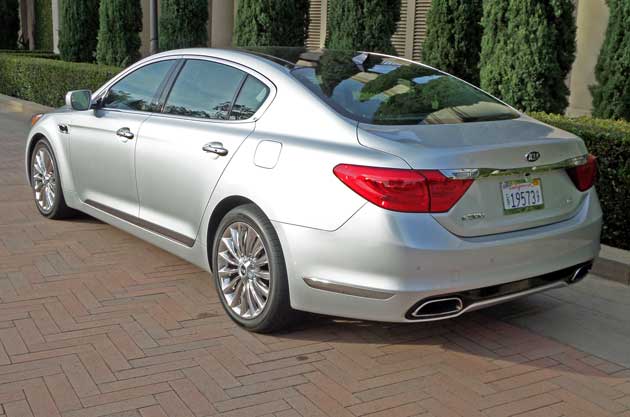 Front and rear park-assist sensors and cameras are standard across the line for enhanced convenience. The parking display also indicates distance to the object via green, yellow and red lines, providing a visual aid to the driver. The V8 comes standard with Kia?s first Rear Cross Traffic Alert system, which provides an audible warning to the driver if oncoming cross traffic is detected from the rear while the K900 is in Reverse. Working in conjunction with RCTA is Blind Spot Detection, which is standard on the V8 and available in the Technology Package on the V6. Opting for the VIP Package adds the new Surround View Monitor system, utilizing four wide-angle mini-cameras at the front and rear and within the outside rear view mirrors.
A Lane Departure Warning System is standard on the V6 Technology Package and both V8 models. First introduced on the Cadenza, the K900 is available with radar-based Advanced Smart Cruise Control, included within the V6 Technology Package, and VIP Package on the V8.

The K900 introduces Kia?s first use of Advanced Vehicle Safety Management, integrating the control of various vehicle monitoring systems, including the Electronic Stability Control, seatbelt mechanisms and multiple warning systems, the AVSM can alert the driver to danger, pre-pressurize the braking system and activate the Pre-Safe Belt system, depending on the anticipated level of a collision risk. AVSM warns the driver in three stages: an audible alarm, a visual warning on both the HUD and TFT LCD cluster and a cinching of the front seatbelts.

My test 2015 Kia K900 was V8 powered in VIP trim and came in an exterior finish of Ice White metallic and the interior executed in Black Nappa leather. The base price was set at $59,500, while the final tally amounted to $66,455.

SUMMARY: The 2015 Kia K900 VIP is essentially a luxury dream machine at the top of heap in the Kia stable. It is totally capable of competing admirably on the playing field with a host of competitive vehicles from other producers of luxury vehicles.

Is it perfect? Probably not for some, but given a chance through an actual driving experience, it is bound to impress. It is not only sleek and elegant in its appearance from virtually every angle, but is equally appealing on the inside with comfort and convenience features in abundance.

Acceleration answers instantly to the driver?s call, with handling attributes ranking right at the top with other, more expensive luxury sport sedans. The ride quality is smooth and stable with a solid, but not harsh road feel. Steering is precise with a pleasing on-center feedback. 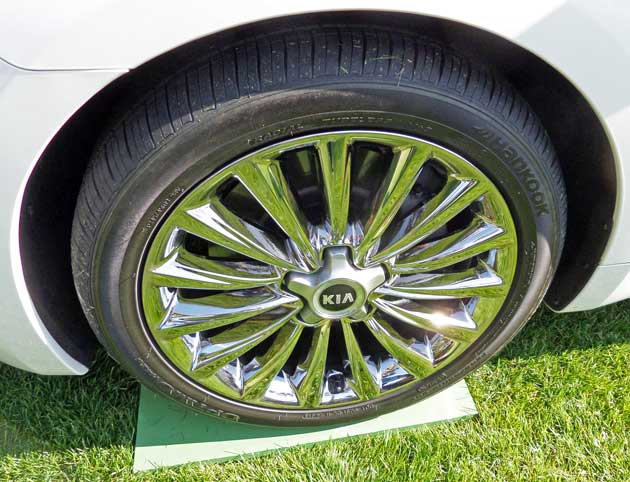 The 8-speed automatic transmission may be shifted manually at the console with the shift stalk placed in the manual mode position, and it responds nicely, but the addition of the paddle shifters will add favorably to the car?s sporty potential.
Bottom line, put aside any misgivings about the nameplate and actually experience seat and wheel time in the 2015 Kia K900 V8 VIP and it is sure to impress. 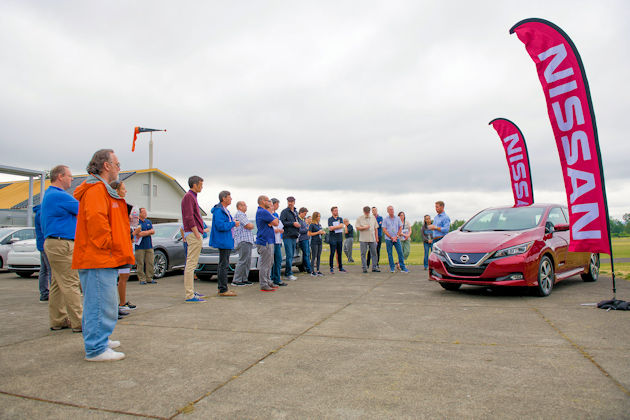