?Jaguar F-Type Coupe for 2015: A TRUE sports car once again?
Three supercharged versions to choose from 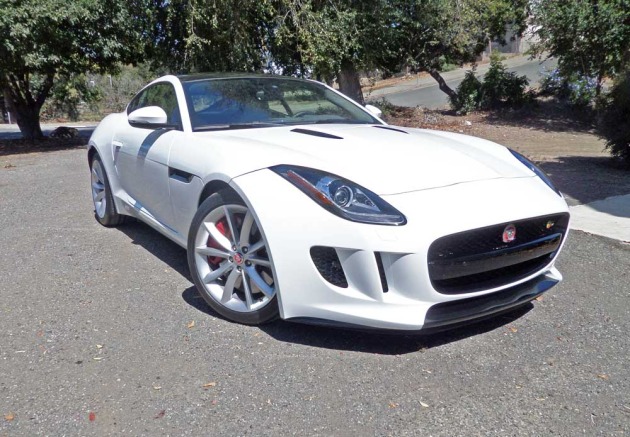 Jaguar?s launch of their all-new 2014 Jaguar F-Type Convertible heralded the marque?s return to a classic, two seat convertible sports car ? something that had been missing from the iconic British manufacturer?s model lineup since the legendary XKE. The F-Type Convertible series represented the rebirth of a seriously sexy, two seat sports roadster, with plenty of performance. Not since the legendary XK 120, XK 140, XK 150 and XKE-type had Jaguar produced a true sports roadster for the avid driving enthusiast. We have to admit that Jaguar currently produces a luxurious and highly desirable lineup of vehicles, but certainly nothing more alluring and capable than the all-new, 2014 F-Type roadster available in three distinctive versions. At least that was the case until the introduction of the latest entry to the Jaguar stable ? the 2015 Jaguar F-Type Coupe, which comes in the same three variants ? the base F-Type Coupe; the F-Type S Coupe, both powered by V-6 engines; and the F-Type R Coupe with V8 power. 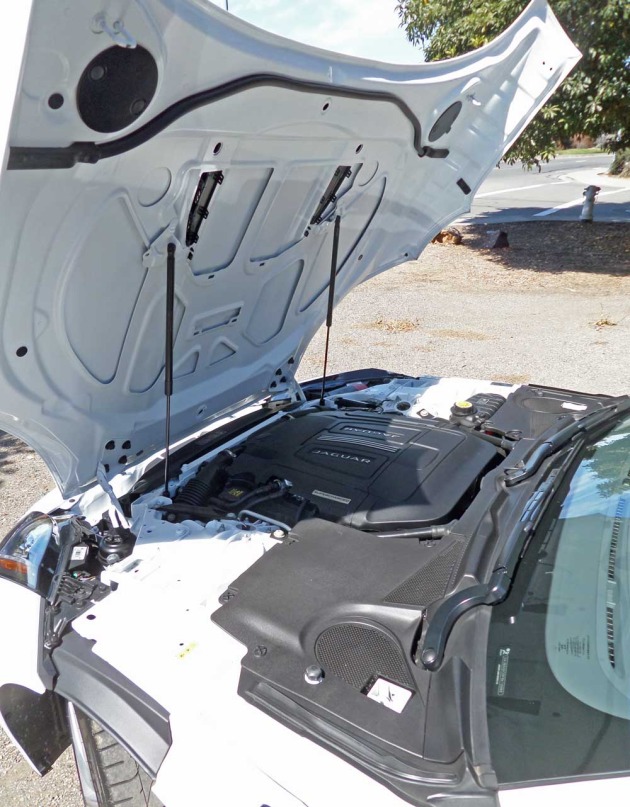 All F-Type models are powered by supercharged engines. The base F-Type draws its energy from a 3.0-liter V6 that produces 340 horsepower along with 332 pound feet of torque. Next up is the F-Type S model, also powered by a 3.0-liter V6 that pumps out 40 additional horses for a total of 380, while boosting the torque level to 339. At the top of the F-Type lineup, is the V8 powered R, which delivers a more than substantial 550 horsepower while generating an impressive 460 pound feet of torque. All are equipped with a new Intelligent Stop/Start system to enhance fuel economy under certain driving conditions. The lightweight body structure is attributable to the extensive use of highly formable AC170 aluminum. 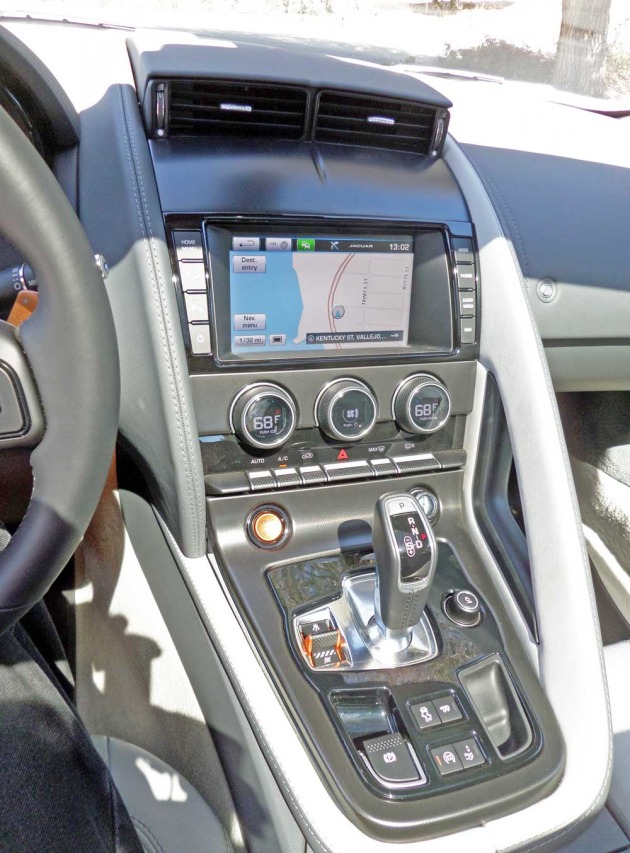 Each engine is mounted forward in a longitudinal positioning, and routes its power to the rear wheels with limited slip differential (mechanical on F-Type and F-Type S, but an active electronic differential on F-Type R. The S and R models also feature a Dynamic Launch Mode. All F-Types handle gear changes through?an eight-speed ?Quickshift? automatic transmission with a centrally mounted SportShift selector that provides full manual sequential control with steering wheel-mounted paddle shifters. Six-cylinder F-Types feature a centrally located dual exhaust that pays homage to the E-Type introduced in 1961, while the V8 R model F-Type rids itself of exhaust gasses through outboard, twin-dual (quad) exhaust tips. An Active Exhaust system, standard for the V6 S and V8 R models and optional for the V6, enhances the exhaust note. Electronically controlled bypass valves in the rear section of the exhaust open under hard acceleration, effectively providing a straight through, free-flowing arrangement. At cruising speeds, the valves close, retaining a powerful exhaust note with comfortable sound levels. 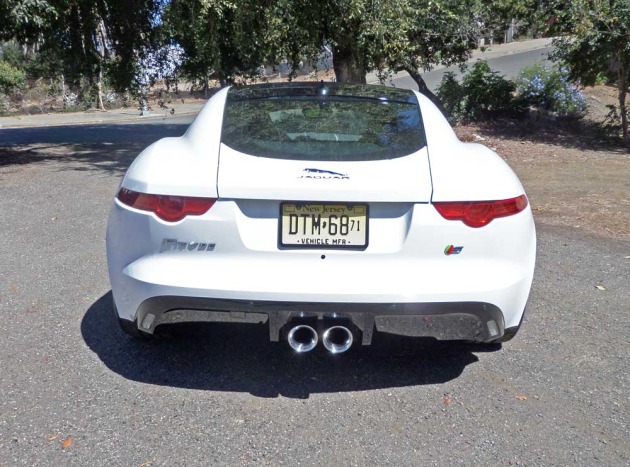 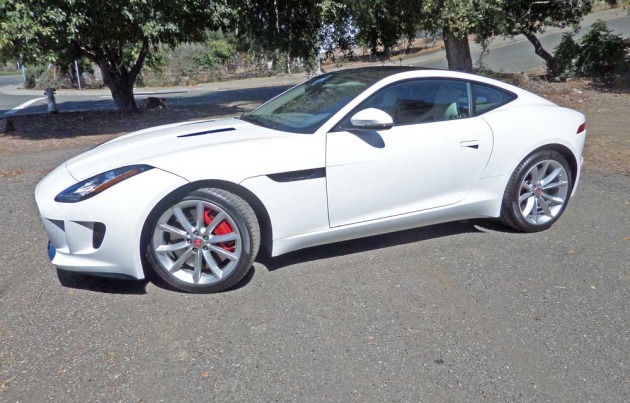 Visually, the 2015 Jaguar F-Type Coupe is seductive from virtually every angle, continuing Jaguar?s sporting bloodline that reaches back more than 75 years according to Ian Callum, Jaguar?s Design Director. The F-Type is as exciting to the senses as the iconic C-Types, D-Types and XK-Types were, and for that matter, still are. The new F-Type Coupe lineup displays a sophisticated glamour and beauty in a design that is destined to stand with its predecessors as a sought after, collectible classic sports car. It exhibits a near perfect proportion and stance, with a long bonnet (hood), a rearward-positioned cabin, and a short rear deck and overhang. The F-Type more than satisfies Jaguar founder, Sir William Lyons? edict that ?All Jaguars have to look fast, even when they are standing still?. 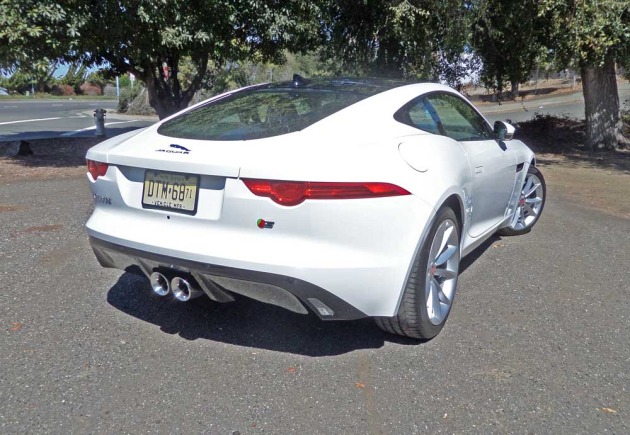 In profile, a rising light catcher or character line reinforces the fuselage or body section, running from the front diffuser to the rear, with a ?coke-bottle? curvature from the shoulder to the rocker, as well as in the overhead form with a tapering tail section. Up front, the sculpted, clamshell hood features a central power bulge and functional, slotted vents, blended with powerful fenders that appear to be ?shrink-wrapped? over the car?s mechanical form. The projector-beam headlamps appear appropriately as cat-eyes, just above and outboard of the large main grille, which sports a piano black, horizontal bar ahead of its mesh inset. The grille is flanked by twin air inlets that sit above a lower grille and front splitter. 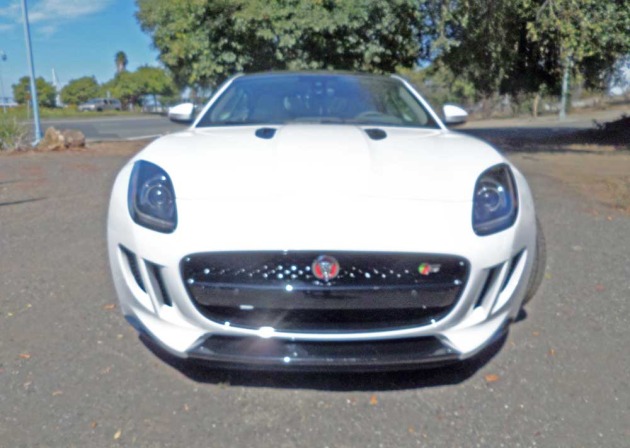 The car?s rear view emphasizes its width, with narrow, distinctive horizontal LED taillamps and broad diffuser that houses the exhaust outlets. There is a deployable rear spoiler incorporated into the rear hatch that operates automatically or may be manually activated. While I am generally a fan of open vehicles, the F-Type Coupe seems to be the preferred choice of design by most admirers, including its chief designer. Exterior door handles pop out, activated by touch or fob and retract to a flush position when the car is in motion. 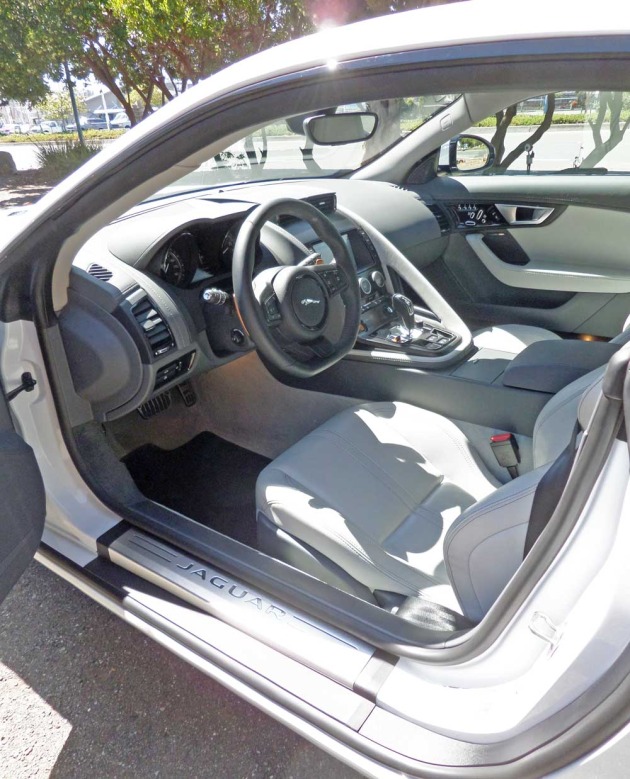 Moving to the inside, the 1+1 cockpit is unashamedly driver-focused in terms of controls and switchgear positioning. The dashboard is low, and provides optimum visibility. A deployable center vent atop the dash disappears from view along with control icons with the ignition off. The purposeful, bronze accented toggle switches below the three dual purpose rotary knobs, and paddle shifters along with the substantial three-spoke steering wheel blend contributing to the sporty persona of the F-Type that is not unlike the feel of a jet fighter cockpit. 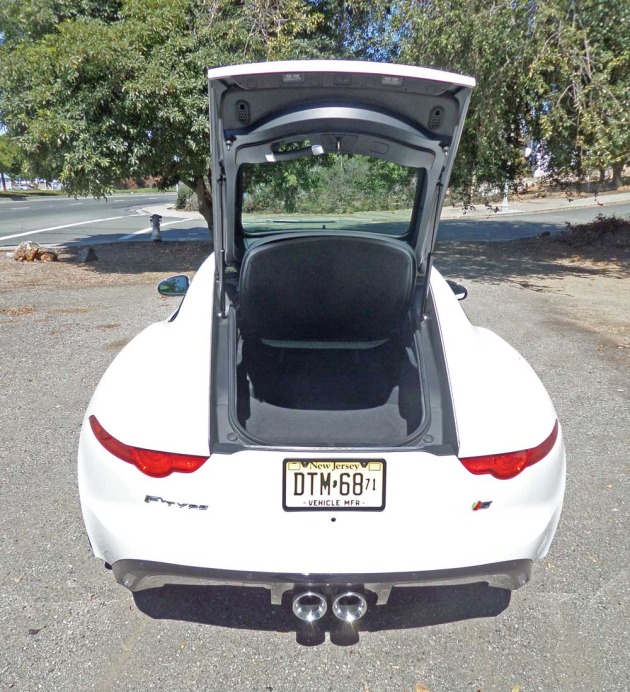 SUMMARY: In a word, the 2015 Jaguar F-Type coupes are all PHENOMENAL, both in terms of styling and performance. The technology level is phenomenal as well. The Performance Packs include performance seats, a Configurable Dynamic Mode, performance brakes with red calipers, a flat-bottomed steering wheel, selectable Active Exhaust and interior Black Pack. I actually prefer the sound of the F-Type S V6 Coupe. Others will likely favor the more raw, raucous exhaust note of the S V8.

The Configurable Dynamic Mode allows the driver to select, which elements of the Dynamic Mode are desired, for instance, steering feel and throttle response may be sharpened while allowing the ride on models with Adaptive Dynamics to remain unchanged. Configurable Dynamics also adds functionality to the central touchscreen geared to track use of the car. The system allows drivers to record lap and split times and will provide information on throttle and brake inputs as well as G-forces generated. 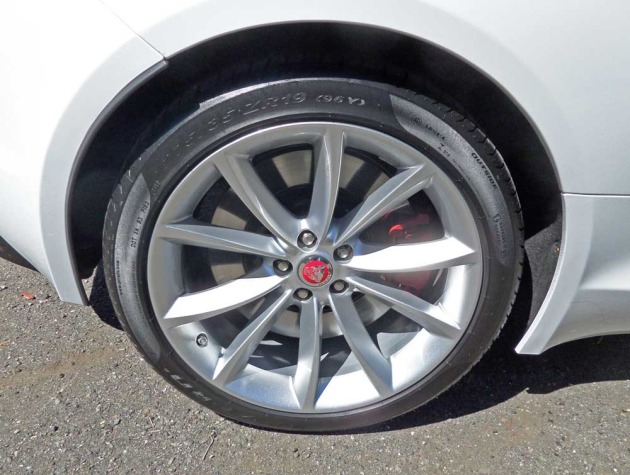 Acceleration is awesome and braking is positively confidence-inspiring thanks to the oversized Carbon Ceramic rotors. The ride quality and stability renders the car solid and totally planted, but without any harshness. The steering input is positively spot-on, with instantaneous response. In fact, every response from the steering to transmission shift points, throttle response, braking and suspension has been finely tuned to deliver the most connected, accurate and involved driving experience possible.

The driver?s environment is emphasized through an asymmetrical cabin layout with all the controls placed naturally to hand and logically grouped, allowing for maximum attention on the driving experience. A grab handle sweeps down the center console on the passenger side, delineating it from the driver?s position and wrapping around the center console.

Virtually everything about the Jaguar F-Type Coupe regardless of the model from base to R delivers a warm, fuzzy feeling. In this writer?s opinion, it may well be the quintessential sports car. Perhaps the only negative felling about it comes form the fact that it is not within my personal financial reach ? if it were, I would order it today in Italian Racing Red and live happily ever after. The metallic British Racing Green is also nice. Which model would I opt for? The F-Type S certainly delivers more than satisfactory performance (definitely all I can handle and then some) and its exhaust note seems more velvety. On the other hand, the F-Type R, despite its more raucous and raw exhaust tone generates considerably more power for not that much more expense when comparably equipped, and it may even offer a better resale value. The latter is actually a moot point, because given its ?sure-to-become-classic and collectible? status, why would one ever want to get rid of it? Either way, the F-Type in either its Convertible or Coupe form marks Jaguar?s serious return to offering a true sports car that reflects its heritage, but in a most modern and elegant way. 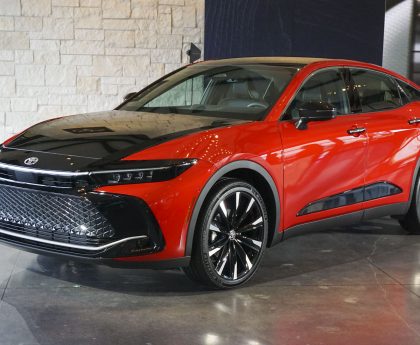