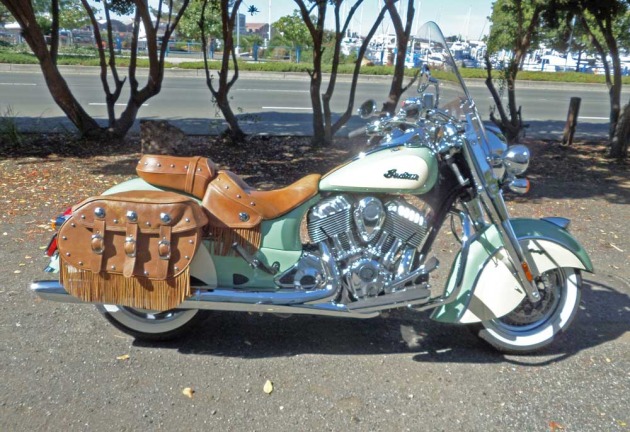 Many think of Harley-Davidson, which was founded in 1903, as being the first American motorcycle manufacturer, when in fact, Indian Motorcycles produced their first motorcycle in 1901, earning them the official title of the first American motorcycle. Indian is now owned and manufactured by Polaris Industries in Spirit Lake Iowa, and the 2015 lineup of Indian motorcycles consists of: the Indian Scout; Indian Chief Classic; the Indian Chief Vintage; the Indian Chieftain; and the Indian Roadmaster. There are other Indian motorcycles that carry iconic model names such as the new Indian Scout, but it is a different animal altogether and features a more contemporary styling and persona and we?ll reserve that for a future review. Bottom line, there are really more Chiefs than Indians (sorry, couldn’t resist).

Indian has gone through some serious ups and downs over the past several years since its rebirth, with on again/off again production by two prior ownerships, before Polaris (who also produces the complete line of Victory motorcycles), stepped up to the plate and purchased the company rights, finally putting Indian motorcycles back on the right track following more than a two year period of development. 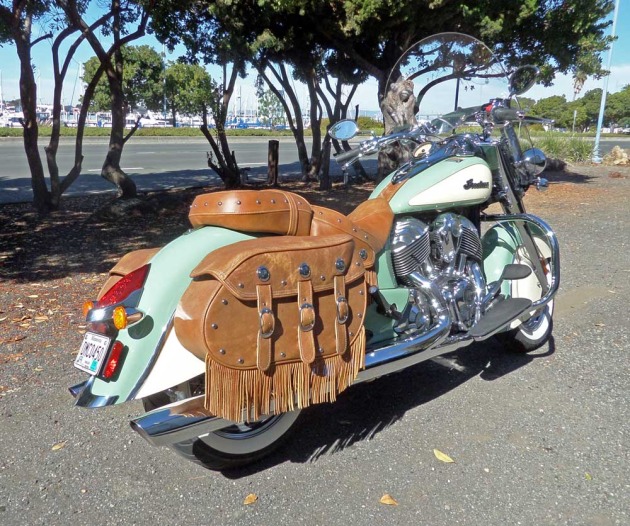 This latest example of the Indian Chief Vintage is essentially a modern interpretation of the original iconic classic heavy cruiser, but with well thought out improvements and enhancements, in the process, eliminating most of the inherent problematic issues that seemed to plague the two earlier attempts at revival of this motorcycle icon. 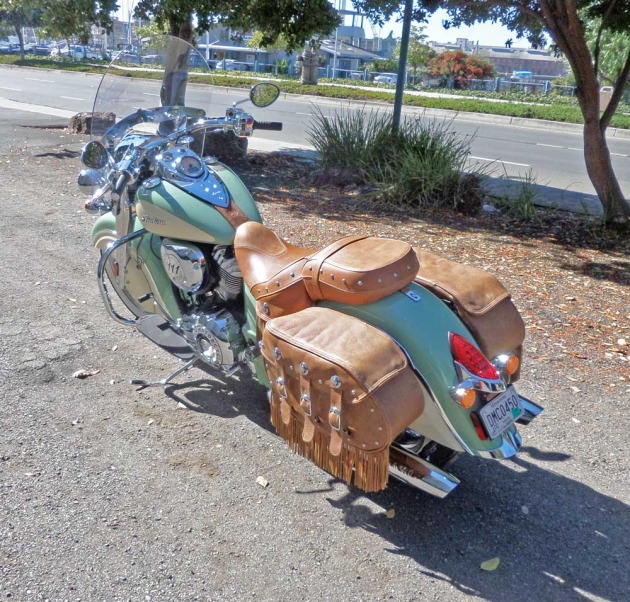 Power comes from an 1811cc (111 cu.in.) 49 degree air/oil-cooled, ?Thunder-Stroke? III V-Twin motor with closed loop electronic fuel injection and split dual exhaust with crossover. Horsepower is not listed, but the motor produces 119.2 pound feet of torque at 3,000 rpm. The primary drive is a gear drive- wet clutch that monitors pwer levels to the 152-tooth final drive belt via a six-speed constant mesh transmission with toe shifter ( a heel shift linkage accessory is an available option. 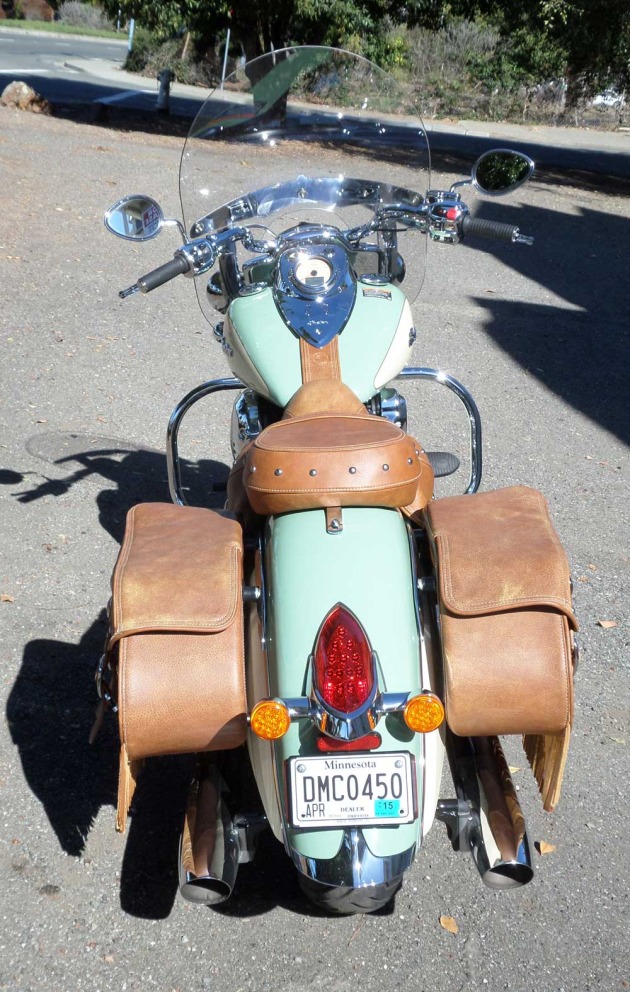 Suspension componentry consists of telescopic 46 mm chrome forks with 4.7-inches of travel up front, and a single shock with 3.7-inches of travel in the rear. Reining in the Indian Chief Vintage are individual front and rear control brakes – dual 300 mm discs with floating rotors and 4-piston calipers up front and a single 300 mm disc floating rotor with 2-piston caliper aft with ABS. 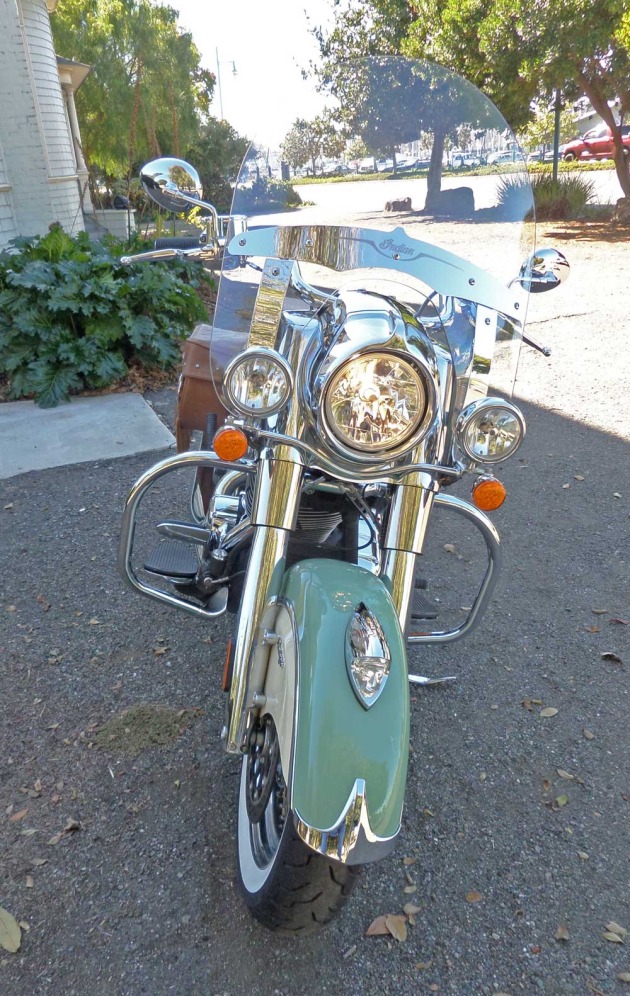 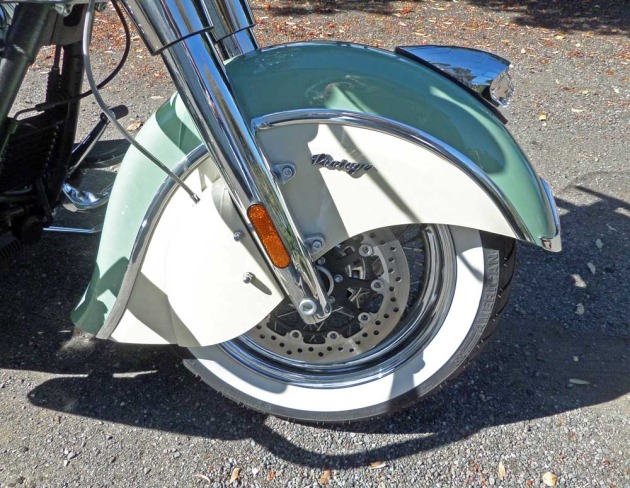 The 2015 Indian Chief Vintage displays the familiar look and DNA of the Springfield production bikes, complete with its gracefully sweeping, valanced front and rear fenders, studded and fringed leather saddle bags and rider seat, (both with conches), generous doses of chrome and the traditional front fender mounted Indian head light with its stylized chrome war bonnet. 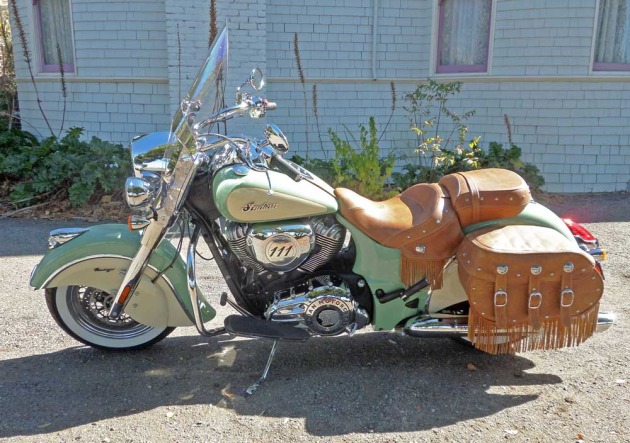 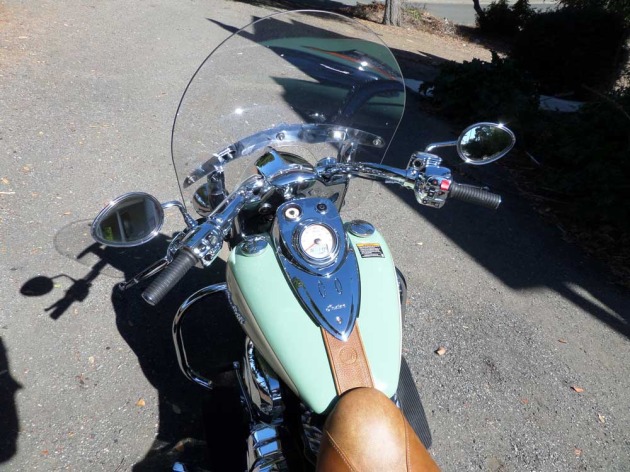 The fuel tank sports dual filler caps outboard of the chrome instrument panel, with the left one being a non-functional dummy cap ? a big improvement over the South Carolina produced bikes which featured dual locking caps that posed a refueling problem by having to juggle the nozzle while locking one and then unlocking the other. Unfortunately, the new stock right side filler cap is non-locking.

My test 2015 Indian Chief Vintage wore one of the two-tone paint themes ? a beautiful light Willow Green and Ivory Cream. Other available two-tone treatments include: Indian motorcycle Red and Thunder Black; Indian Motorcycle Red and Ivory Cream. Badging is clean simple with only Indian script on the tank sides and Vintage script on the lower front fender panels. The base price was set at $22,049 with the final wampum total coming to $22,449 before tax and license. Of course it?s entirely possible to spend considerably more by adding a full complement of tasteful period accessories, such as fishtail exhaust tips, fender tips, bumpers and racks, fringed board skirts and more.

SUMMARY: It?s confession time ? I?m a Harley guy and prefer a traditional, heritage look, but the 2015 Indian Chief Vintage bagger managed to push all my buttons. It?s a totally gorgeous bike, and it not only looks great, it performs exceptionally well too. The balance and maneuverability are outstanding at any speed, and the riding position proved ideal for me. The ride comfort is outstanding as well with a confident firmness and virtually no sponginess. 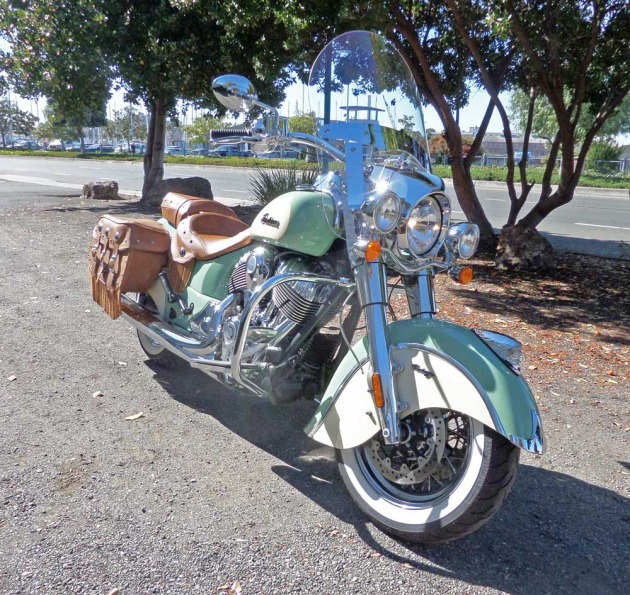 The Indian Chief Vintage is not a sport bike, but rather a serious and purposeful, heavy, touring bagger. It may feel heavier than its more than 830 pound (wet) weight due to its 29 degree rake and lengthy 68.1-inch wheelbase. The throttle response is smooth, linear and predictable with no unexpected surges due to the motor?s long flat torque curve. 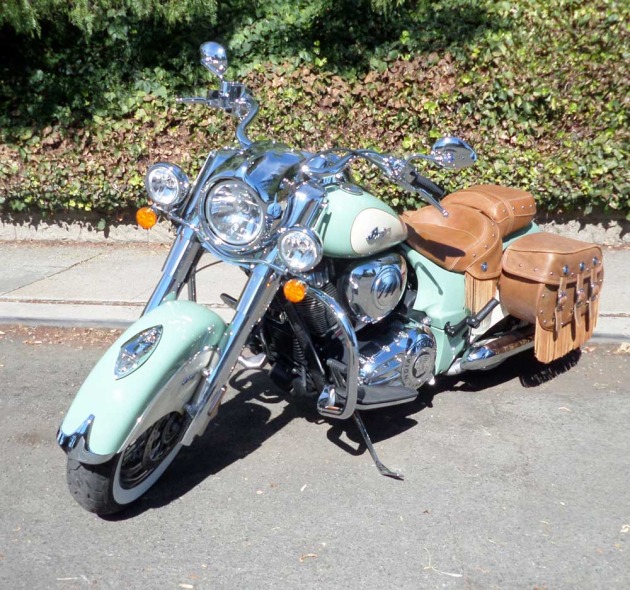 For security purposes, there is a keyed fork lock ad no ignition switch, but rather a proximity fob ? there?s nothing to push or turn, but the bike will not start without the fob on one?s person. A power button turns off the lights after the engine is shut off. The windshield is easily detachable and the bike looks even more ?old school? without it, but it doesn?t lock. Besides, the bright chrome headlamp nacelle and gauge console render a high reflectivity off the windshield, particularly with the sun at your back. Unfortunately, there?s no locking provision for the gas filler cap or saddle bags. 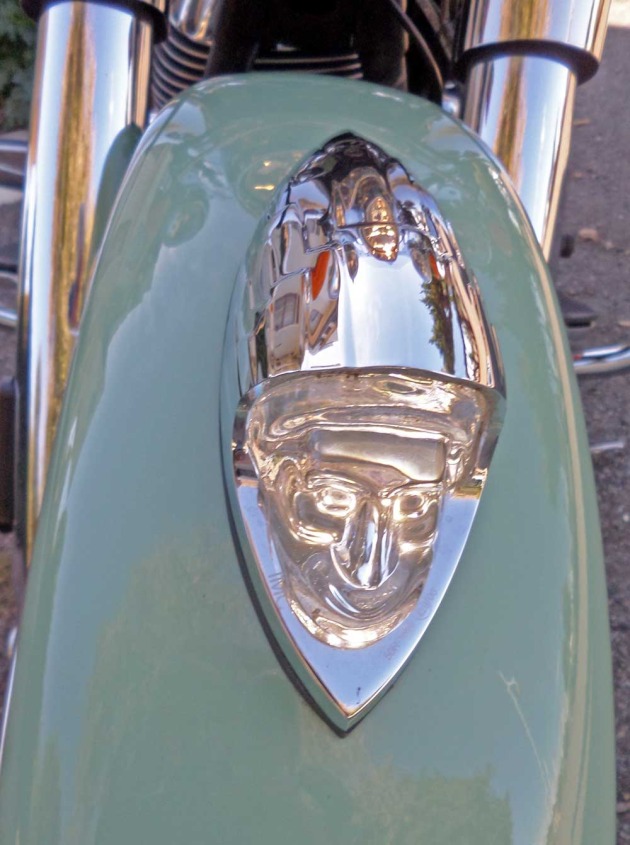 Bottom line, you may be able to find a faster bike or one with sportier attributes, but you?re not likely to find a more pleasant ride or one that stirs a more positive emotional response. The 2015 Indian Chief Vintage is a bike that any rider should be able to appreciate and proud to add to his or her collection.