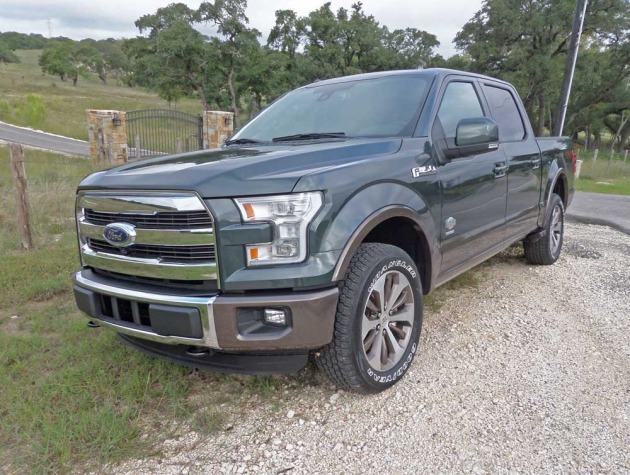 San Antonio, TX – What is the toughest, smartest and most capable Ford F-150 ever, that?s made from beer cans? Just kidding ? no beer cans were harmed in the making of this latest hauler from Ford, but it does feature an innovative aluminum body and bed, mounted on a new, stronger and lighter frame. The transition to aluminum construction trimmed 700 plus pounds from the previous model F-150, and the innovation doesn’t end there. 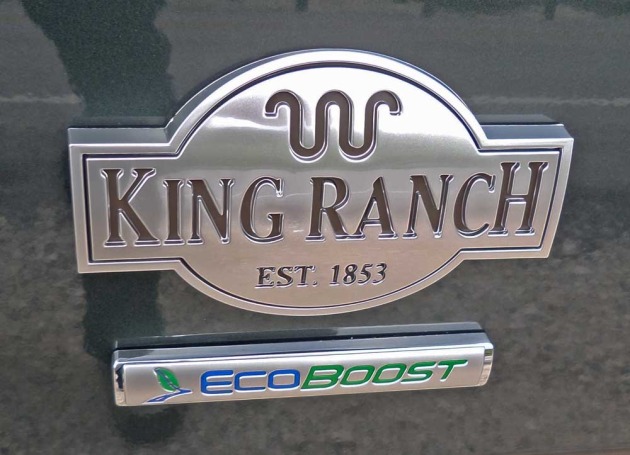 Ford?s F-Series has been America?s best-selling truck for 37 years as well as the best-selling vehicle for the past 32 years. The all-new Ford F-150, which will go on sale later this year, provides ten significant driver-assist features to enhance utility, comfort and convenience. 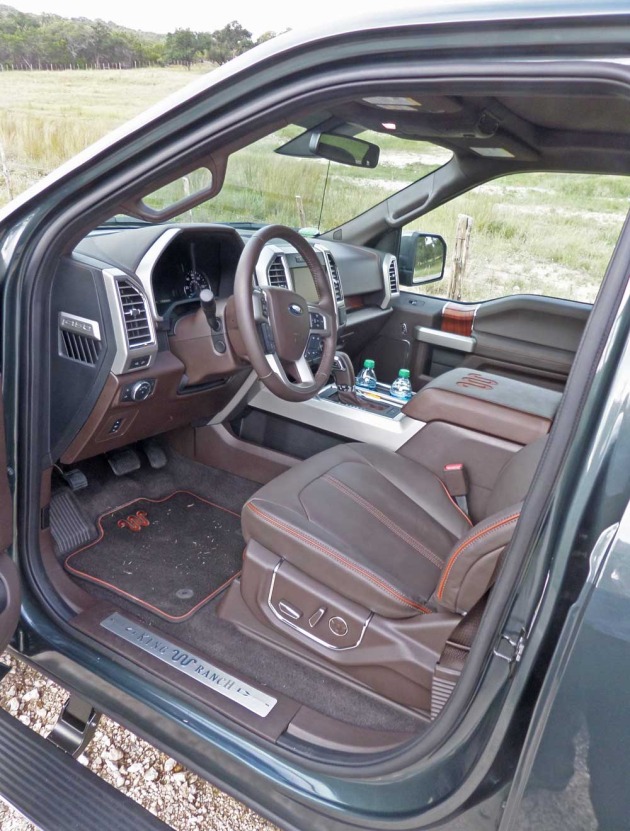 Significant new features of the 2015 Ford F-150 stable include:

? A class-exclusive Active Park Assist that utilizes two ultrasonic sensors and electric power-assisted steering to help drivers parallel park. The sensors measure the gap between two vehicles to determine if there is enough room for the F-150, and after confirming that it can fit, the truck automatically steers into the space, while the driver operates the accelerator and brake.

? A class-exclusive Adaptive cruise control and collision warning with brake support that uses radar in the front of the truck to measure the distance and speed of vehicles ahead, automatically slowing to keep a consistent following distance set by the driver. Collision warning triggers visual and audio alerts if the system detects the following distance is diminishing too quickly and a collision may occur. It also pre-charges the brakes if the driver needs to stop suddenly.

? Curve Control is an innovative system that was developed exclusively by Ford engineers to help drivers maintain control of their vehicles if they take a curve too quickly by automatically reducing torque and applying four-wheel braking. This can reduce vehicle speed by up to 10 mph in approximately one second, helping drivers stay on their intended path.

? A Class-exclusive smart trailer tow module that shows the driver which lights on a trailer connected to the truck aren?t working, making it unnecessary to exit the truck and walk around the trailer to personally find inoperative lights.

? An available Blind Spot Information System that uses radar sensors in the taillamps to monitor areas that may not be visible to the driver. The sensors trigger a warning light in the sideview mirrors to indicate another vehicle is in a blind spot if the driver is attempting to change lanes. The same sensors are also able to detect a vehicle coming down an aisle when the driver is slowly backing out of a parking space

? An available lane-keeping that?s designed to help prevent a driver from drifting outside of the intended driving lane. The system automatically detects the left- or right-hand road lane markings using a camera mounted between the windshield and interior rearview mirror. A vibration in the steering wheel also alerts the driver. The system can provide steering torque to help guide the vehicle back into the lane if necessary.

? A Class-exclusive 360-degree camera with split-view display is available 360-that uses four exterior cameras to give the driver a bird?s-eye view of up to seven feet surrounding the F-150 to assist in parking, maneuvering in tight spots and navigating narrow roads and trails at low speeds.

? Hill Descent Control? is available uses the anti-lock brakes to give the driver control while descending a hill. With the push of a button, the truck?s speed is set automatically 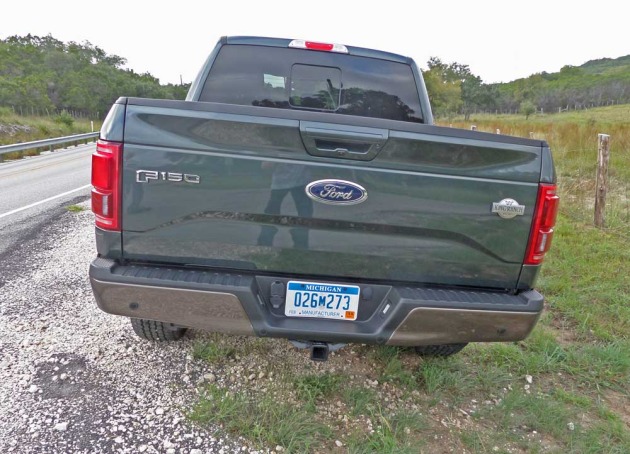 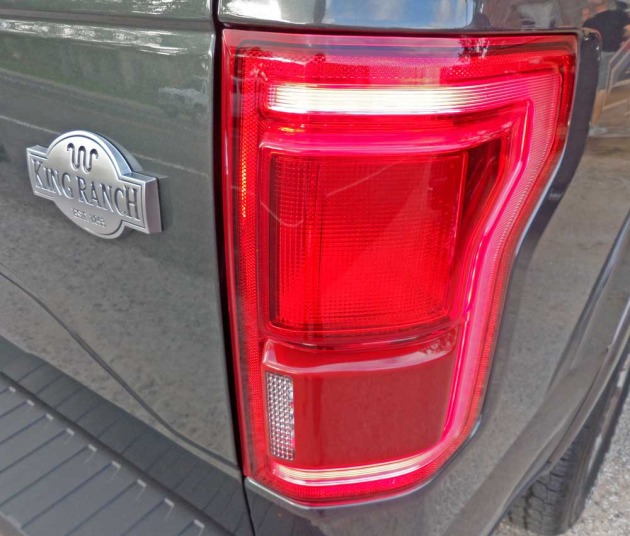 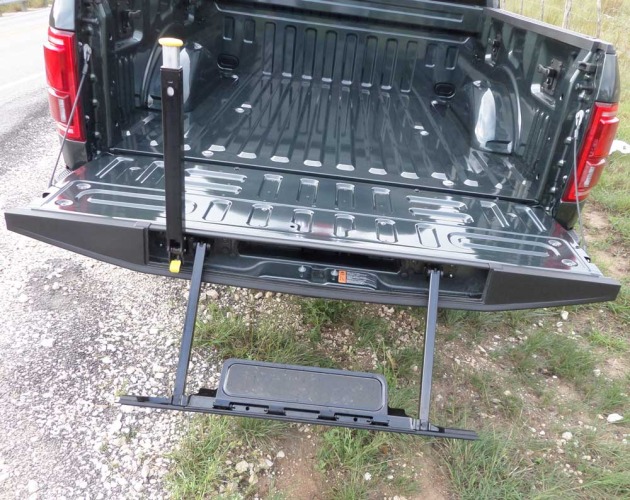 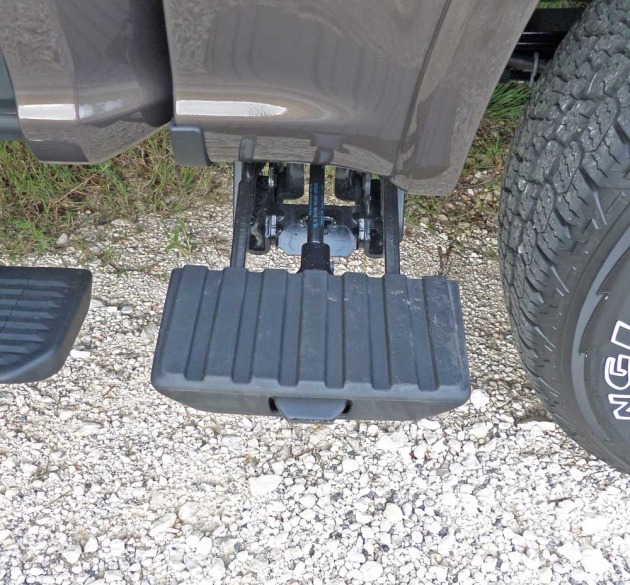 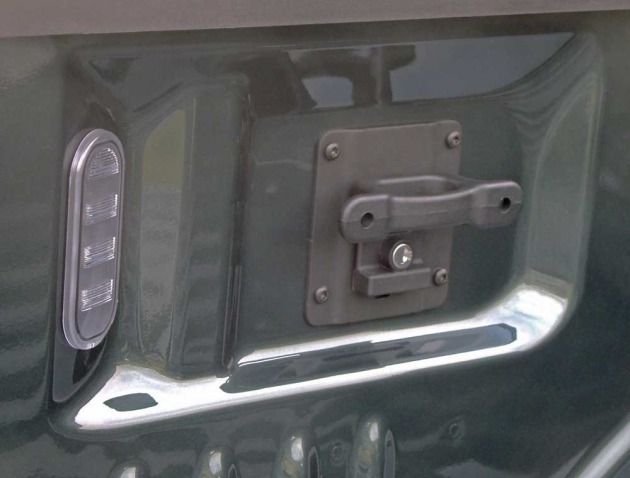 There will be four engines available to power this new aluminum pickup: a 283 horsepower 3.5-liter TI-VCT V6; a new 2.7-liter EcoBoost 325 horsepower V6; a 5.0-liter 385 horse V8; and a new 365 horsepower/420 lb./ft. torque 3.5-liter EcoBoost V6. All engines mate to a six-speed automatic transmission, and both Front and Four-Wheel Drive configurations are offered in three cab styles ? Regular Cab, SuperCab and SuperCrew, with three bed length choices: 5.5 foot, 6.5 foot, and 8 foot depending upon cab configuration. 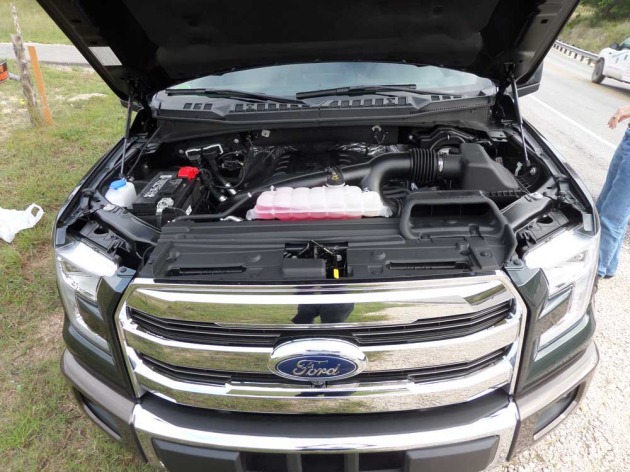 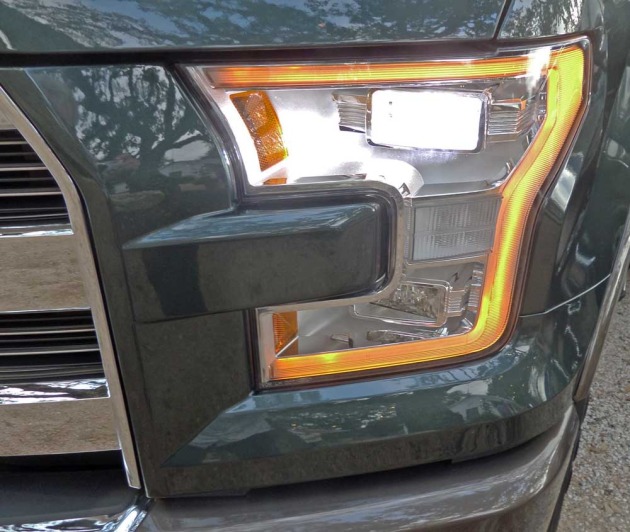 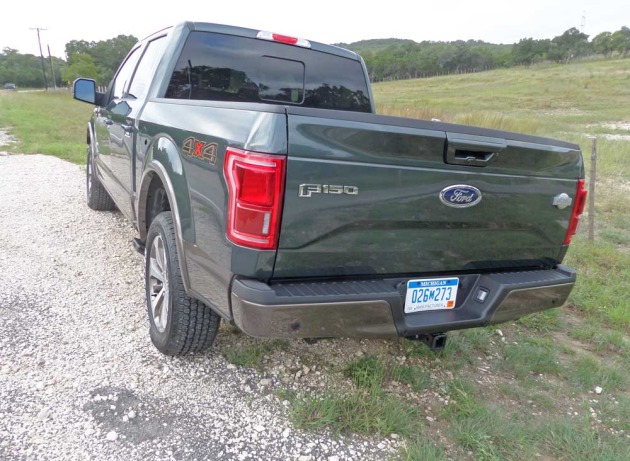 Ford F-150 trim levels or Series offered include: the base XL; XLT; Lariat; King Ranch; and top-of-the-line Platinum. The new trucks will be produced at Ford?s Dearborn Truck Plant in Dearborn, Michigan and at the Kansas City Assembly Plant in Claycomo, Missouri. 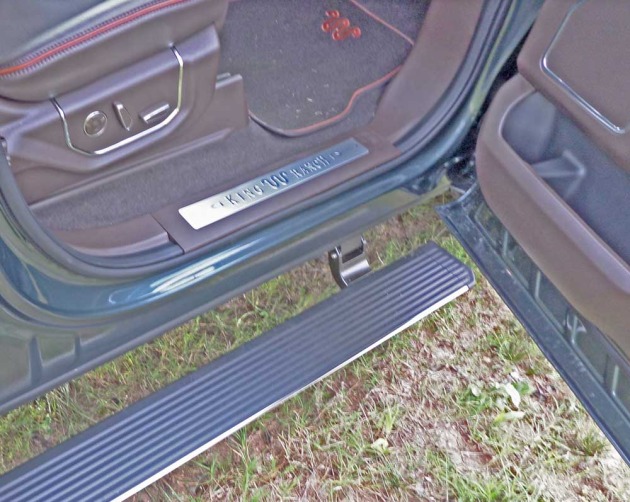 The new F-150 is capable of towing up to 12,200 pounds (an increase of 1,100 pounds) and can haul up to 3,300 pounds, which ups the ante over its predecessor by 530 pounds. Fuel economy ratings increase from 5 percent to 20 percent depending upon the model.

During the national Press Launch, I was afforded the opportunity to pilot several versions of this latest iteration F-150 in a variety of scenarios from street, highway, drag strip and autocross. I spent the most time in a King Ranch 4×4 SuperCrew powered by the new 3.5-liter EcoBoost V6, finished outside in Guard Green Metallic over Gold lower trim, with a Java and Mesa Antique leather interior. The base sticker was set at $53,115 while the final tally rose to $61,685 after adding extensive options and Destination and Handling charges. The King Ranch was followed by time in an XLT Series 4×4 SuperCrew with the new 2.7-liter EcoBoost V6 as its motive force. Its exterior finish was Magnetic Metallic, with a Black interior. It started at $40,620 and wrapped at $49,770. Entry-level price for the F-150 XL is $26,720. The 2015 F-150 lineup offers something for virtually every light-duty trucker, depending upon needs and budget. 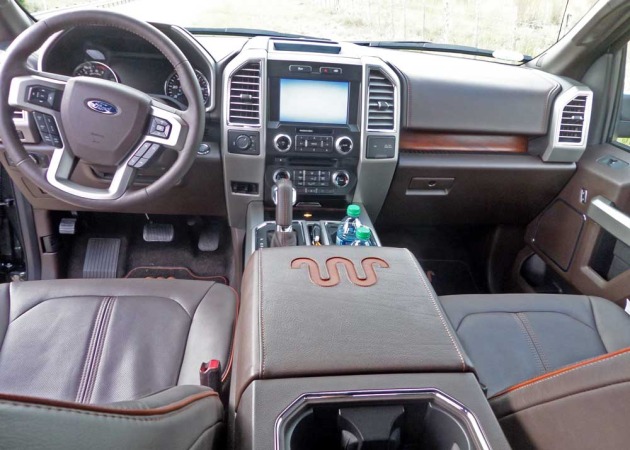 SUMMARY: This new F-150 is most impressive and the best ever to date, with much needed styling improvements, based on the Ford Atlas concept truck that appeared at last year?s Detroit International Auto Show. There are several specific grille treatments that differentiate the trim levels. Obviously some are more appealing than others. Overall, the new truck lineup displays a simplified attractive and clean appearance. In other words, it?s now really attractive ? not as cool as the iconic 1940 Ford ? ton truck in my opinion, but then I happen to own one. 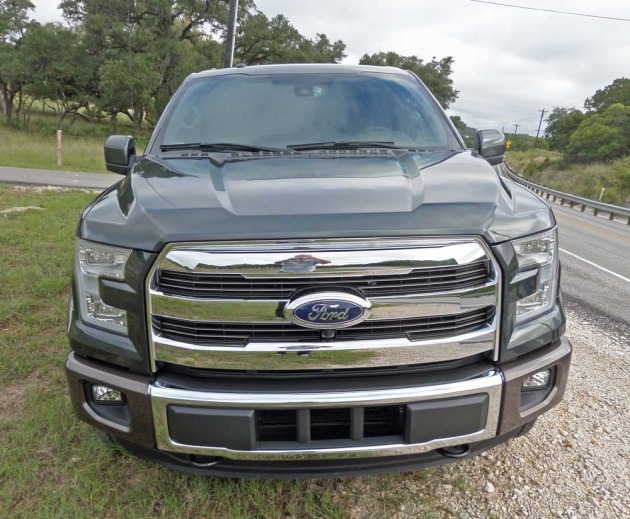 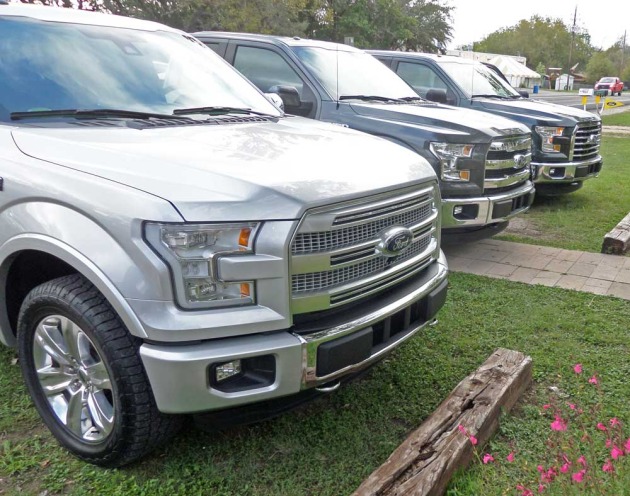 Driving this newest light-duty Ford truck is more akin to piloting a family sedan, but with considerably more flexibility, versatility and purpose. The ride is comfortable in the front or back seat of the SuperCrew models and the handling is nimble and responsive. 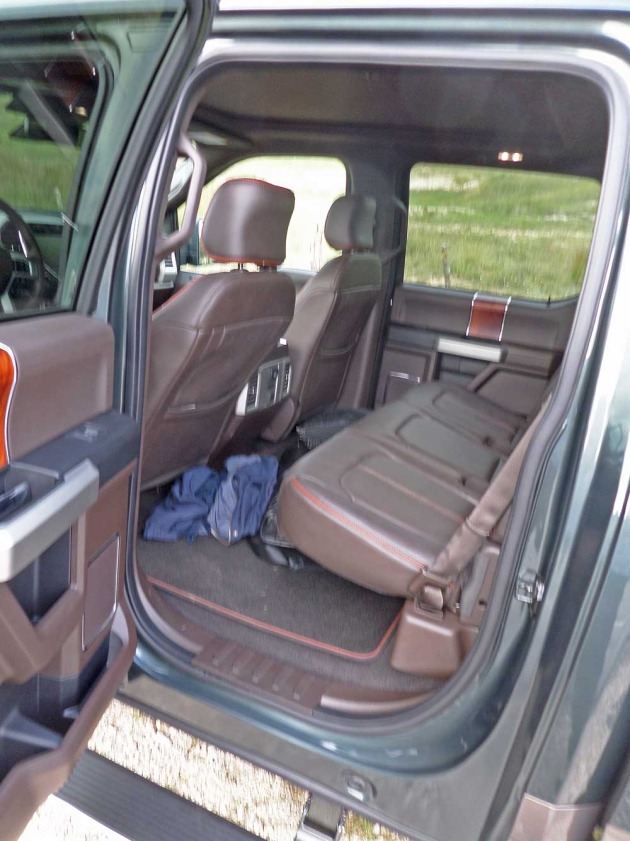 Acceleration is brisk with either of the new V6 engines, which deliver performance properties to rival many V8s. The transmission shifts quickly and seamlessly, and the F-150s handled better and turned in better times than competitive examples that were on hand for comparison purposes. 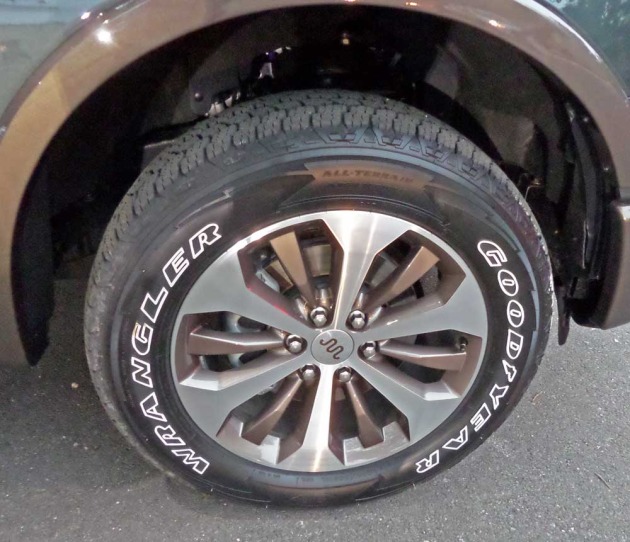 Bottom line, the 2015 aluminum-bodied Ford F-150 lineup is likely to cause other truck manufacturers to sit up and take notice. Competition is good for business and business is good at Ford. The new F-150 stable is full of winners. 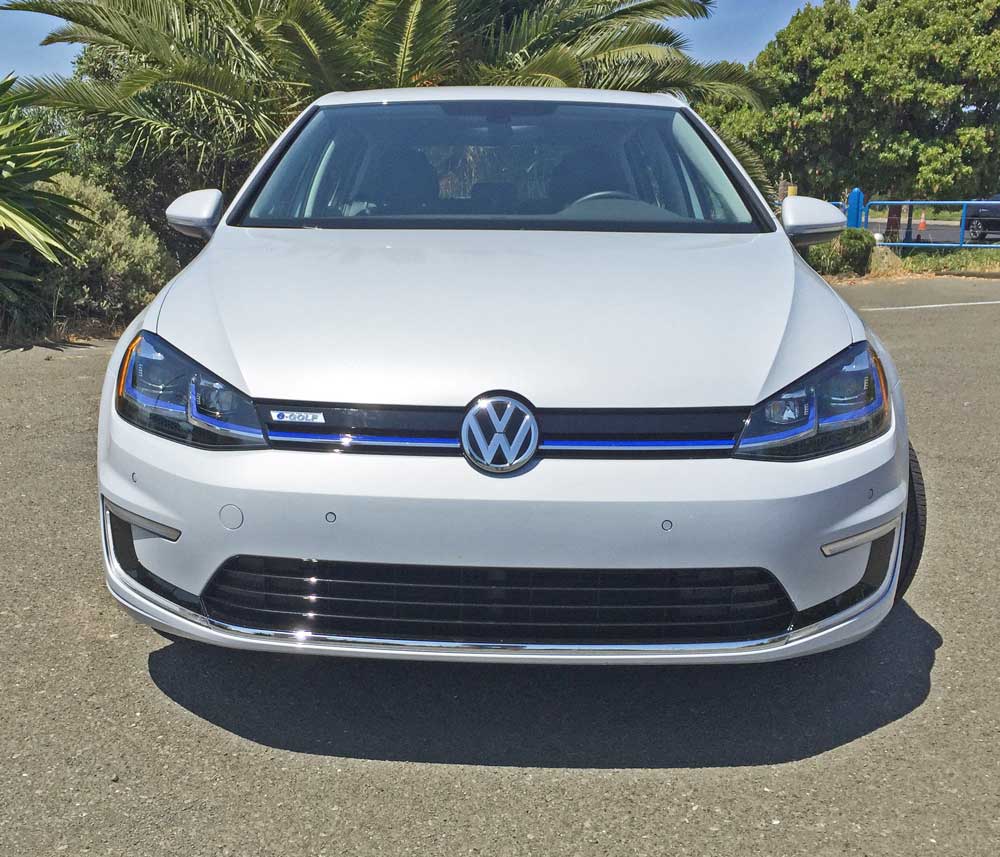 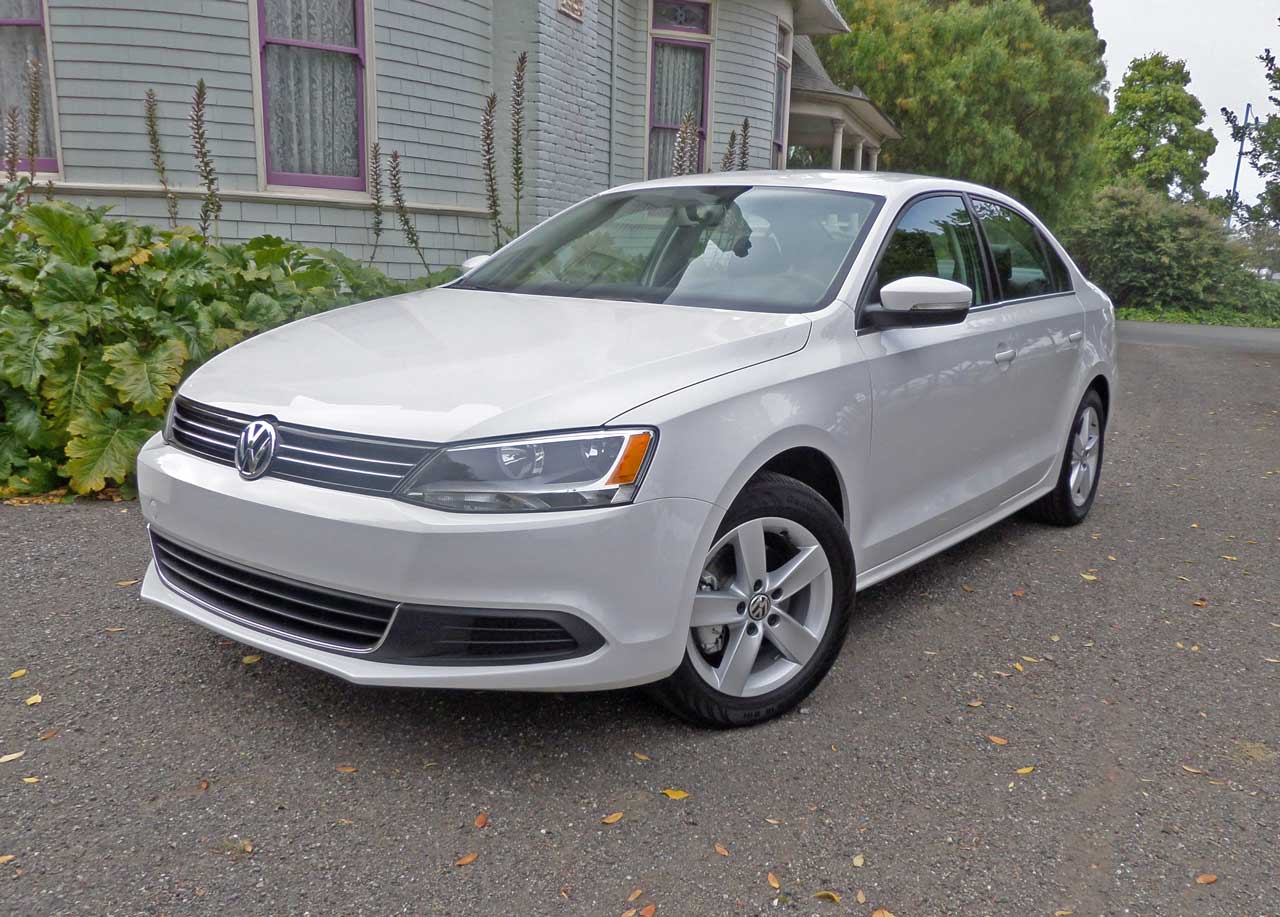