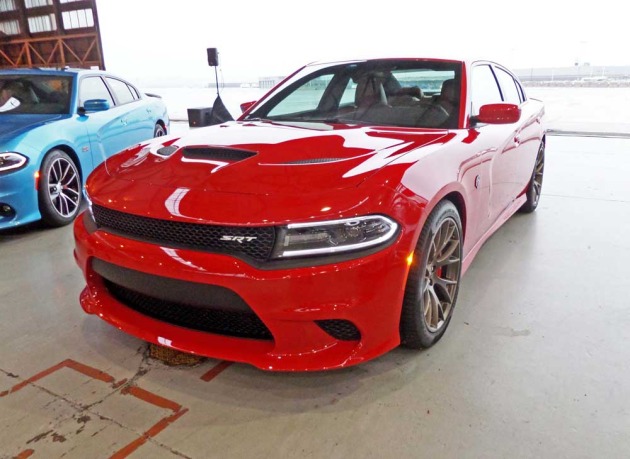 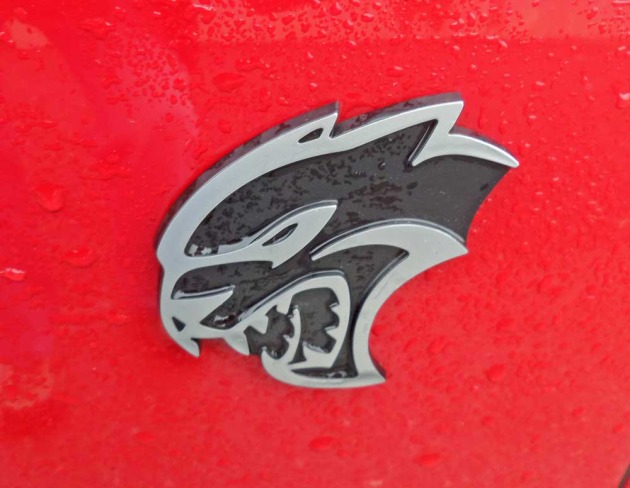 The first Dodge Charger appeared in 1964 as a concept vehicle based on a two-door Dodge Polara, but as a one-off, open air roadster. It was conceived and built to help introduce the company?s new hemispherical head performance 426 HEMI engine. The following year, the 1965 Dodge Charger Concept vehicle made its debut at the Chicago Auto Show, illustrating the advanced design direction of the brand. The first generation production Charger appeared from 1966 to 1967. Generation Two ran from 1968 to 1970 followed by Gen III ? 1971 to 1974. The fourth generation ran from 1975 to 1978. Generation V didn?t appear until 1981 and ran for 6 years, but as a front-wheel drive 2+2 hatchback, designed by Chrysler Corporation?s European design and engineering team. The hatchback design was dropped in 1987. Following a 12 year hiatus, homage was paid to the performance Dodge Chargers of the earlier muscle-car era with the debut of the 1999 Dodge Charger R/T Concept vehicle at the North American International Auto Show in Detroit. It appeared as a fastback four-door performance coupe. Generation VI represented the years from 2006 to 2010. The Seventh Gen Charger ran from 2011 to 2014, with the 2014 Dodge Charger 100th Anniversary Edition celebrating Dodge?s Centennial year, which brings us to the eighth generation of Chargers ? clearly the best yet. 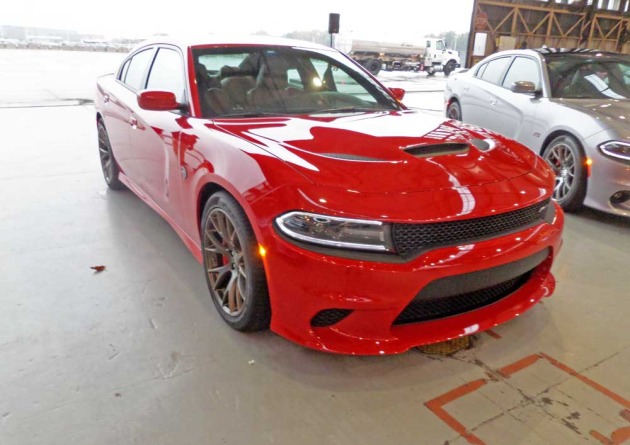 This latest iteration Dodge Charger is the only four-door muscle-car in production, and it is the quickest, fastest and most powerful sedan in the world. The new Charger is not, by the way, simply a Dodge Challenger with two extra doors. There are six distinct trim levels of the new Charger: SE, SE AWD, SXT, SXT AWD, R/T, R/T Road & Track, R/T Scat Pack, SRT 392 and SRT Hellcat. All Chargers are rear wheel Drive with the exception of the V6 SE and SXT models, which are optionally available with AWD, and all also come with zinc steering wheel mounted paddle shifters except the SE Trim. 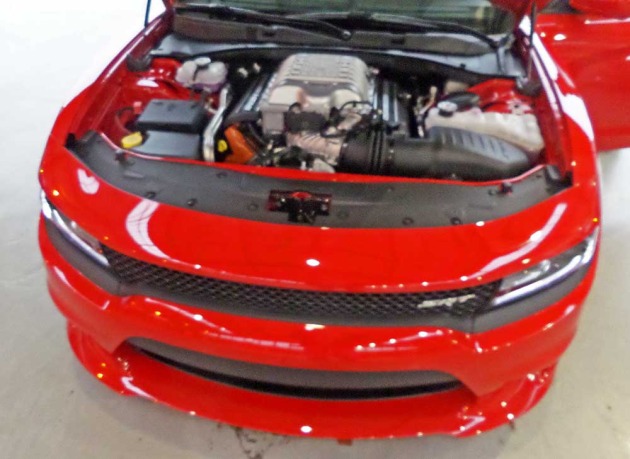 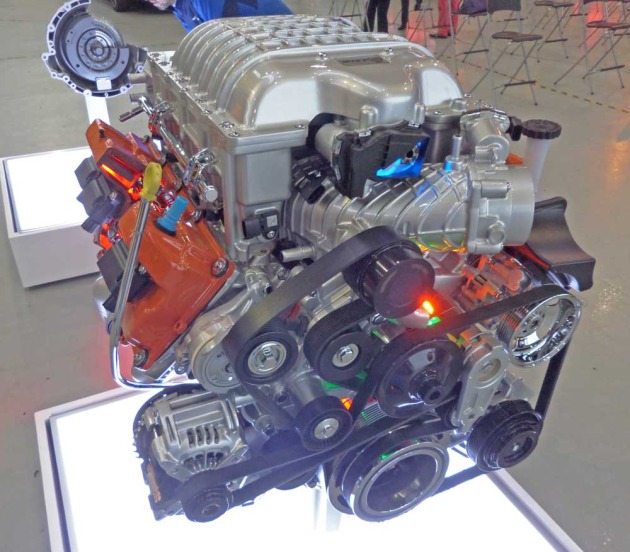 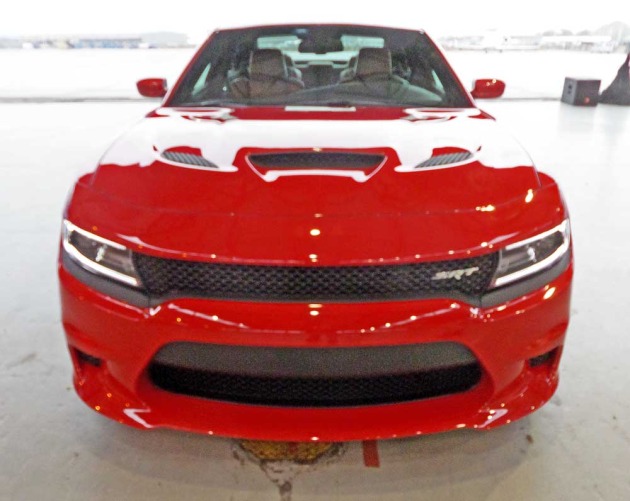 In terms of its exterior styling, the new family muscle-car Dodge Charger displays a familiar and easily recognizable Coke-bottle form with scalloped body sides, menacing front crosshairs, a bold athletic stance, signature LED ?racetrack? tail lamps that have all received a major redesign. The overall look of the Charger presents cleaner lines that create a sleek, chiseled and lighter appearing mass. The hood, fenders, front and rear fascias, headlamps, tail lamps, front doors and rear spoiler have all been resculpted, creating a more seamless look with improved aerodynamics- only the rear doors and the roof are unchanged. The rear makeover starts at the C-pillar?s touchdown point, which is moved rearward, creating a more exaggerated fastback appearance, combined with a shorter rear overhang. A new three-piece spoiler is more integrated into the deck lid, while the signature racetrack LED tail lamp showcases the same continuous glowing ribbon of light that debuted on the new 2014 Durango. The center high-mounted stop lamp is relocated from the top of the deck lid to the roofline inside the back glass, allowing the Charger?s backup camera to be centered. 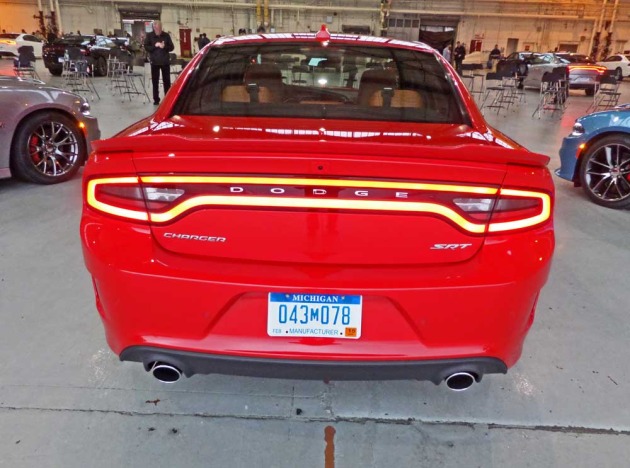 Inside, the new Dodge Charger exhibits a restyled and driver-focused interior features new premium, soft-touch materials, a new customizable 7-inch full-color, driver information display instrument cluster and a new instrument panel center stack with next-generation Uconnect Access touchscreen and available HD?audio system. The interior is instantly brought to life by its unique premium aluminum-lithograph driver bezel, which enables a seamless, billeted and highly detailed appearance, that carries through the instrument cluster and center console. The instrument cluster also received a high-tech treatment and now includes a full-color 7-inch DID. similar to the one found in the 2014 Dodge Durango and Dodge Dart. Standard on all models, this full color high-definition screen allows drivers to customize how information is presented in more than 100 ways. 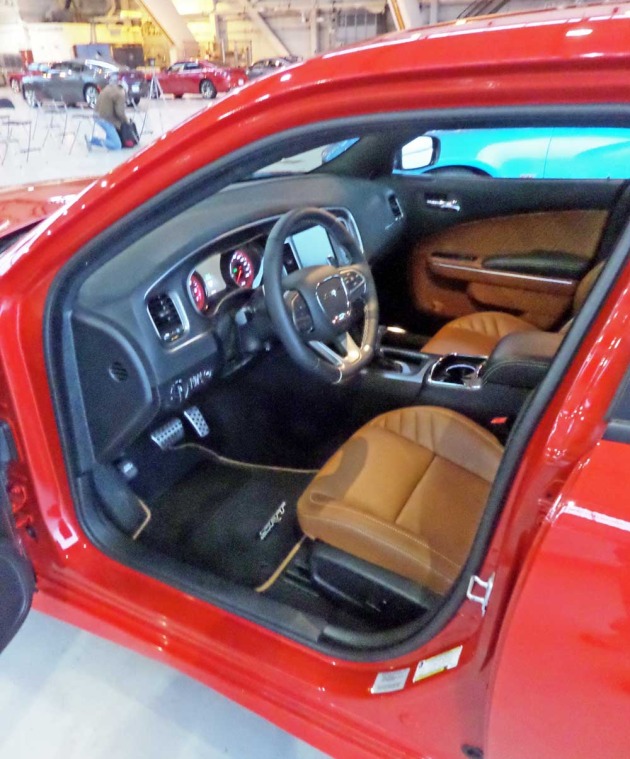 During the national press preview and launch of the new Charger, my driving partner and I began our journey in a pre-production Dodge Charger SRT Supercharged Hellcat on the way to Summit Point Motorsports Park in West Virginia for track testing in the rain. Our Charger Hellcat test car wore an exterior sprayed Pitch Black with a Black and Sepia toned interior. The base price was set at $62,295 while options including: the Laguna Leather Group, Harman Kardon? Audio Group, power sunroof, Uconnect 8.4 Touchscreen with AM/FM/SXM/BT and NAV GPS Navigation 20-inch tires and Destination charge elevated to final sticker amount to $69,165. We were also able to test lesser models, both on road and on the challenging two-mile track with 10 turns. There was even a specially equipped Police Pursuit Dodge Charger available for testing on the track, complete with operational lights and siren. 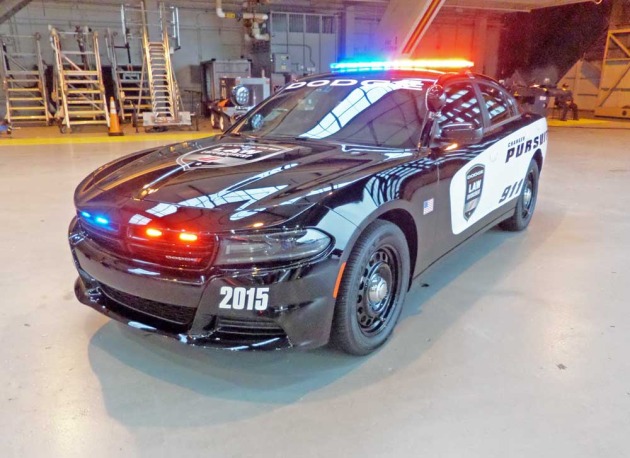 SUMMARY: The 2015 Dodge Charger unquestionably lives up to its billing. It is truly the quickest, fastest and most powerful four-door sedan in the world, and with six different trim levels one should be able to find one to suit both their budget and performance requirements. There?s literally a Charger for everyone and all of the V8 models certainly deliver an exhilarating time behind the wheel in the wet or on dry pavement. The Hellcat is definitely the most potent, and it serves up sports car performance with family sedan practicality and versatility. Aside from the Hellcat?s incredible acceleration, the exhaust note is nearly orgasmic. Put the pedal to the metal, and relish in the exotic V8 note. 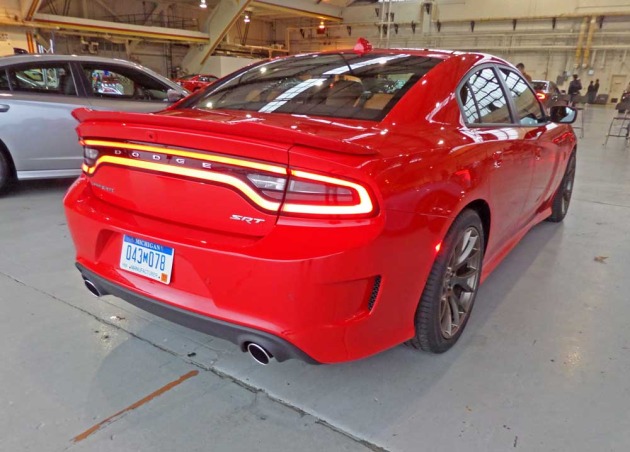 Certainly not a nod to frugality, but the new Charger is a hoot when nailing the throttle off the line (using the launch control or not) and lighting up the tires ? smoke ?em if you got ?em. No water necessary for slipping and sliding. The opportunity to enjoy the prowess of the new Charger on twisting roads and in freeway driving was most enjoyable but the track exercises offered the opportunity to indulge in excess without the risk of receiving a present from John Law for excessive speed or reckless driving.

The redesigned cabin provides a warm and inviting atmosphere, along with being performance oriented and driver focused, and the materials, fit and finish are certainly a cut above the levels offered by many competitors. Don’t be surprised if there is a flooding of used Vipers on the market soon, as the Charger is not only more comfortable than a Viper, and more practical, seating up to five. and in the case of the SRT Hellcat, the performance is superior to that of the Viper as well.

Handling characteristics are stellar and the ride quality is comfortably compliant, while also delivering exceptional stability. Whether on-road or on-track, Charger SRT owners may personalize their drive experience via an all-new Drive Modes feature. Drive Modes tailor the driving experience by controlling horsepower, transmission shift speeds, steering (Charger SRT only), paddle shifters, traction and suspension. Drive Modes are pre-configured for Sport, Track and Default settings, while the Custom setting lets the driver customize the drive experience to their favorite settings. Custom – Allows the driver to personalize the vehicle?s performance. Sport – Delivers increased vehicle performance capability over the Default Mode. Track – Delivers maximum vehicle performance capability on smooth, dry surfaces, and Default – Activates automatically when starting the vehicle. The Drive Mode feature is controlled through the Uconnect system and may be accessed by Pushing the SRT button on the instrument panel switch bank; Selecting ?Drive Modes? from the ?SRT & Apps? menu; or by Selecting ?Drive Modes? from within the Performance Pages menu.

The Dodge Charger SRT with a Hellcat engine comes standard with two key fobs ? red and black. The red key fob is the only key that can unlock the full horsepower and torque potential of the Charger SRT Hellcat engine; while the black key fob limits the driver to a reduced engine output. 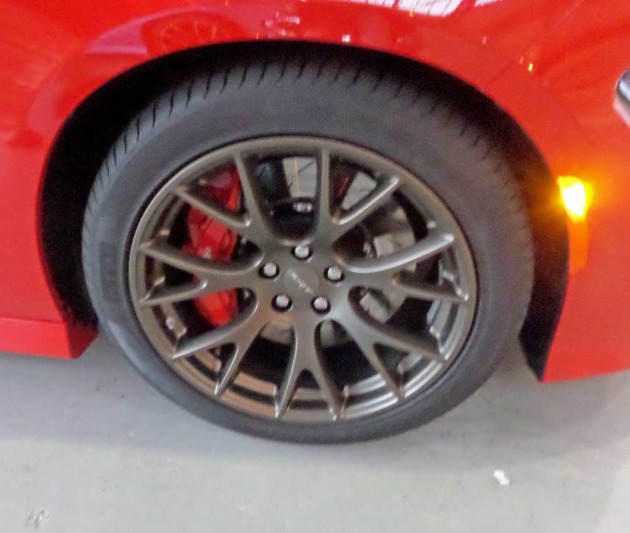 Valet Mode is provided on both Charger SRT and Charger SRT with a Hellcat engine. With the Valet Mode activated, the following vehicle configurations are enabled: Engine is remapped to significantly reduce horsepower and torque; limited to 4,000 rpm; Transmission locks out access to first gear and upshifts earlier than normal; Transmission will treat the manual shifter position the same as the drive position. Traction, steering and suspension are set to their ?Street? settings; Steering-wheel paddle shifters are disabled; Drive Mode functions are disabled; Electronic Stability Control is enabled to Full-on; and Launch Control is disabled. The driver can activate and deactivate Valet Mode with a personal four-digit PIN code they create. This should also work well on teen-aged drivers.

In the final analysis, the 2015 Dodge Charger is a far cry from its predecessors and should please nearly all individuals from mild to wild. My personal favorite is of course the SRT Hellcat Supercharged, but the other versions aren?t chopped liver either. There?s no ?Dodging? the fact that this latest iteration Charger sets the high performance bar considerably higher than ever before. 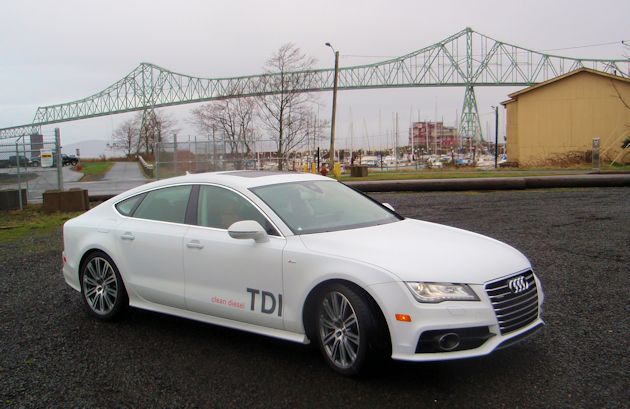