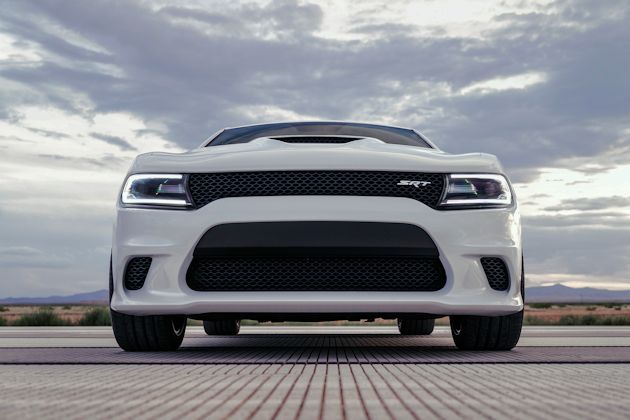 Washington D.C. ? When the Chrysler Public Relations department contacts me and says ?come to Washington D.C. to drive the new Dodge Charger Hellcat?, the response is easy — ?YES, when do I leave.?

Driving the ?world?s only four-door muscle car,? which just happens to be the ?quickest, fastest and most powerful sedan in the world? is something no self-respecting automotive journalist can pass-up, especially when there?s track time involved! 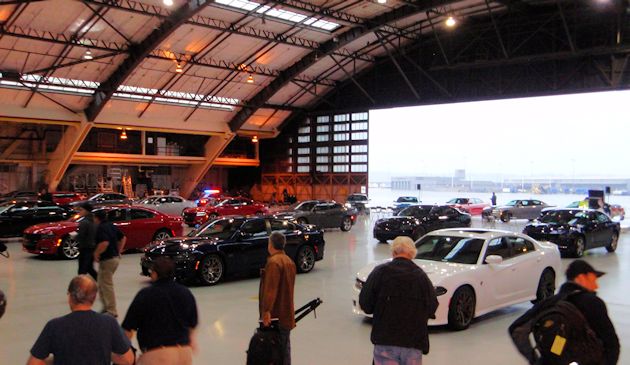 Arriving at the staging area for the Charger drive was like being the proverbial kid in a candy store, or better yet a toy store. Dodge used a large hanger at Ronald Regan Washington National Airport to park a couple of dozen new Chargers for auto journalists to drive and for Dodge to do their presentations about the engineering, design, marketing and all the other important features that brought this new generation Dodge Charger to market. 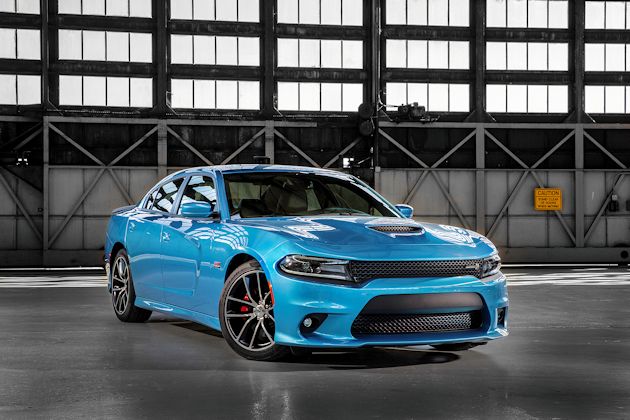 In the hanger were 2015 Dodge Chargers in every model, trim level and powertrain offered. I think all the colors may have been represented, too.

After hearing Tim Kuniskis, President and CEO, Dodge and SRT talk passionately about what Dodge was doing he turned it over the heads of various departments to give us more details about the design and engineering intricacies. Then it was time for the journalists to get behind the wheel for a 100 mile drive to the Summit (WV) Point Motorsports Park to spend some quality time on the track ? in the rain. 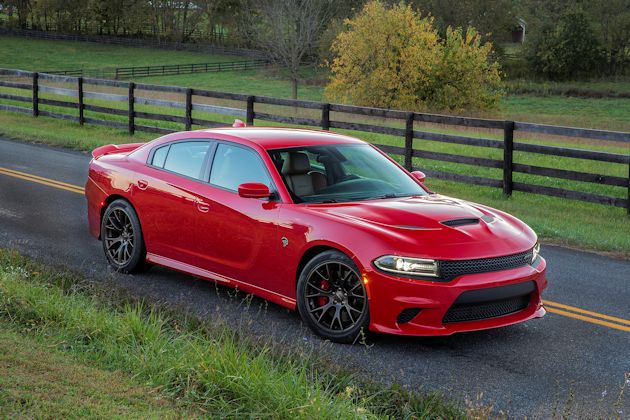 A friend on the PR staff slipped me and my driving partner, Arv, the keys to a 2015 Dodge Charger Hellcat. This generous gesture meant we?d get more seat time in the ?world?s fastest sedan.?

When I started the engine and my hearts skipped a beat, listening to the overwhelming sounds of 707 horses at idle. I?d heard the same sound not too long ago when the Dodge Challenger Hellcat was introduced; it?s one of those remarkable sounds that you feel inside your chest. 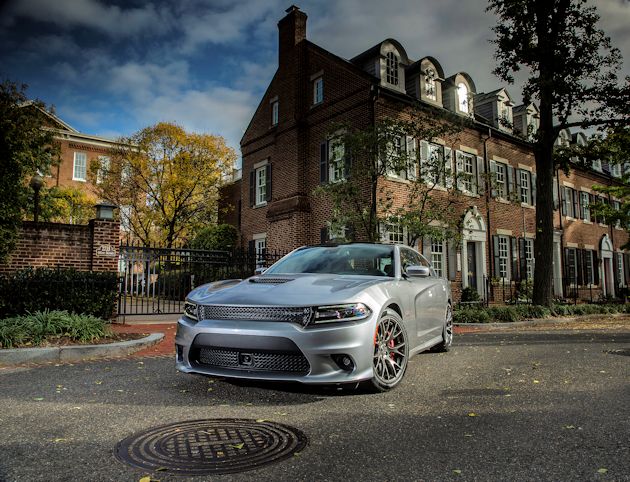 It was raining as I pulled out of the hanger toward the maze of Washington D.C. roads and streets ultimately headed east. A firm tap on the Hellcat accelerator to merge into traffic brought wheel spin and I could even feel a little side slip. Of course, with all the power under the hood, this car was even capable of doing the same thing on dry pavement. After a few turns, merges and lane swaps the Hellcat and I became friends and it was like driving a luxury sedan. 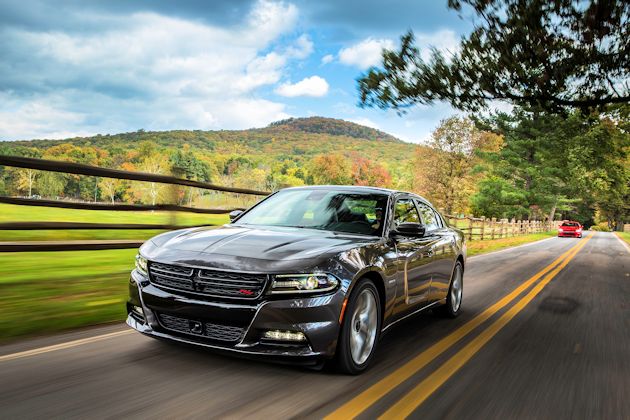 After a beautiful drive through the Virginia and West Virginia countryside we arrived in Summit Point, West Virginia (population 1,754 and one motorsports park.). There we had a chance to drive the two-mile, 10-turn Summit Point Circuit track in both the R/T and the Hellcat. 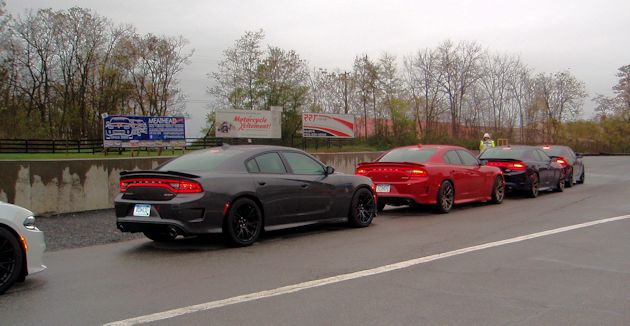 With a professional driving instructor in the right seat I lapped the track in the rain learning not only the track but the car. Both cars are fast and have excellent handling characteristics along with superb massive Brembo brakes that bled off speed very fast. The eight-speed automatic transmission shifts quickly up and down maintaining the optimal engine speed. The tight steering was right on and the cars feel rock solid and agile despite their large size. On a couple of occasions I had some side slip accelerating out of a corner too quickly, but a quick turn of the wheel and less pressure on the accelerator the Charger was ready to go with far better traction and corner holding power than I would have imagined — considering the rain. 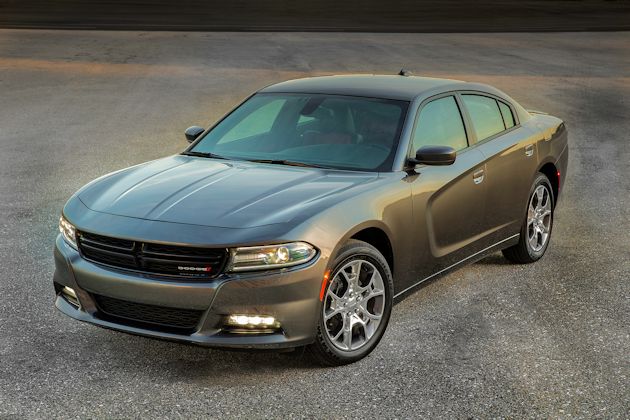 The 2015 Dodge Charger lineup has a car for nearly every driving style, and what I discovered as I drove various models during the day is that they all have a refined demeanor, and different levels of personality and performance. Charger comes in eight unique models including the SE, SXT, R/T, R/T Road & Track, R/T Scat Pack, SRT 392 and the SRT Hellcat. There is also a Police Pursuit model, which I also had a chance to drive, complete with lights and siren. 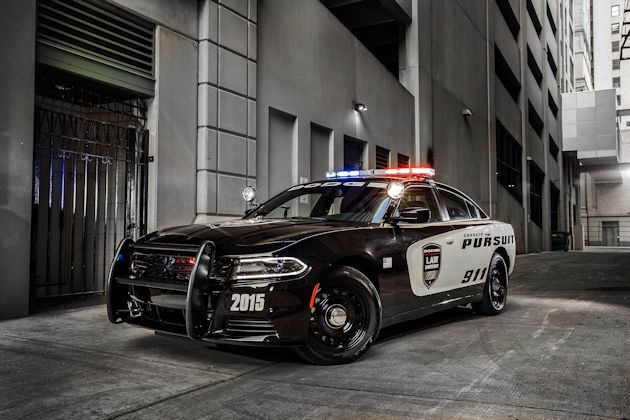 Engine variations include two versions of the 3.6-liter Pentastar V-6 (292-hp and 300-hp), a 370-hp, 5.7-liter Hemi V-8, 485-hp 6.4-liter Hemi V-8 and the supercharged 707-hp 6.2-liter Hemi Hellcat. Each of the engines, which is exclusive to its model, drives a version of Dodge?s eight-speed TorqueFlite automatic transmission. All but the SE model have steering wheel-mounted zinc paddle shifters.

The Chargers are all rear-wheel drive, with the exception SE and SXT, both of those V-6 models are available with an optional all-wheel drive.

The looks of these latest Charger models teeters between family sedan and muscle car with distinctive styling elements that insure there will be no confusing it with anything else on the road. With the exception of the rear doors and the roof, every body part has been changed. 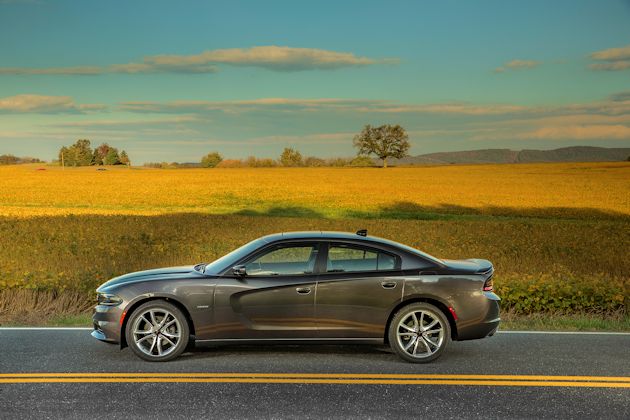 Different models have different grille treatments with the SE, SXT and R/T models getting a wider look and a subtle variation of the traditional Dodge crosshairs in the dark grille over a wide lower air inlet. The SRT (Street and Racing Technology) Chargers have a slightly shallower upper level grille, without the traditional crosshairs, over a massive lower air inlet. All versions have the exclusive ?C?-shaped LED light rope daytime running lights along with LED taillights, LED center mounted stop lights and LED fog lamps (except for the Hellcat, which uses the fog lamp area to suck in more air).

The sides have the newest treatment of the Charger side sculpting which adds to the muscular look of the sedan. A ?race track? taillight treatment is distinctive to the Dodge brand with lights extending from side to side and even wrapping into the rear fender. The result looks like a diagram of a race track, or I could even envision the shape of an old telephone handset. 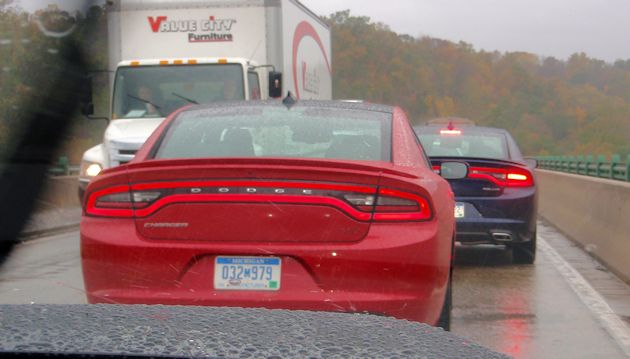 The interiors vary from a variety of attractive cloth seats to Nappa leather to a combination of Nappa leather with Alcantara? suede insets to Laguna leather performance seats. All the seats are attractive and comfortable, but the Laguna leather seating in the SRT models is especially impressive. Dodge thinks of these cars as family cars and as such have even designed some great looking child safety seats for the rear. The Charger is a considered a large car by EPA specifications. The luggage compartment is 16.5 cubic feet. 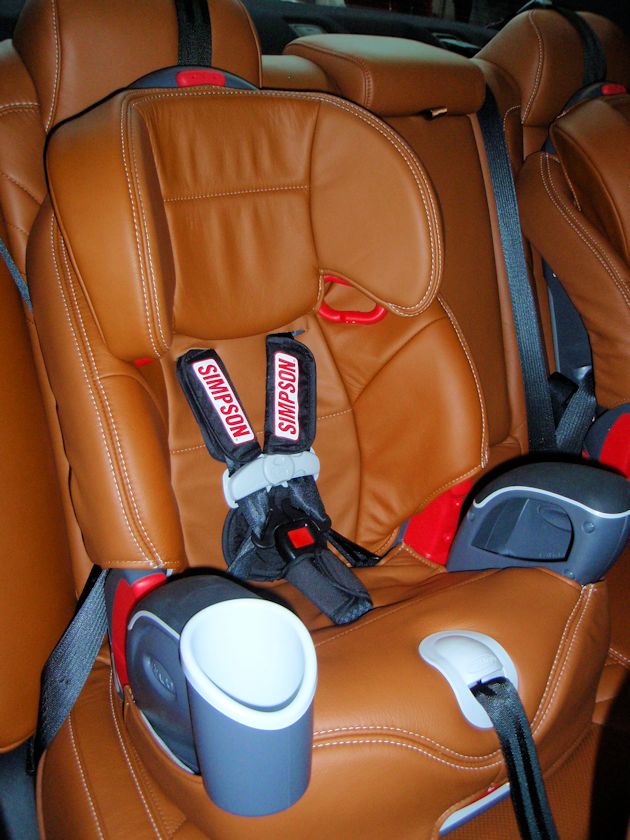 The dash is well-designed with three basic focal points. The instrumentation is the traditional large analog tachometer and speedometer with a configurable seven-inch full color display screen in the middle. Second is the Audio and infotainment section mounted high on the center stack with an 8.4-inch Uconnect screen standard on all but the entry-level SE, which has a 5.0 inch display for the audio system. Uconnect displays the audio systems including Sirius XM, Bluetooth controls, and navigation functions on cars equipped with that option. The third focal point is a grouping of buttons and three large knobs located about mid-center stack. The upper knobs are a very welcome audio system tuning and volume (which can also be done on the touch screen) and buttons to access vehicle functions to change performance levels, shut off the traction control or some of the other safety features. The lower controls are for the climate control system. 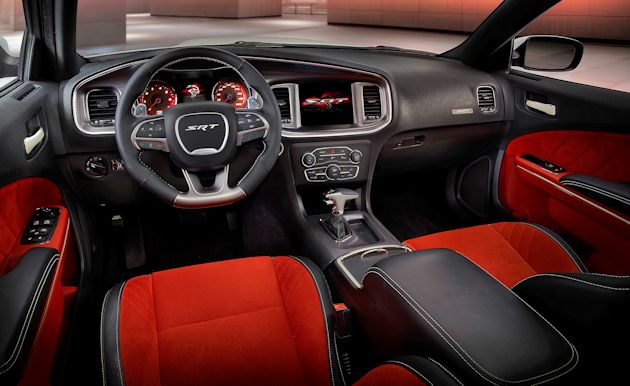 Each of the new Dodge Chargers has an extensive list of standard equipment, plus each of the models has several available option packages that add upgrades to the system, wheels, convenience and comfort.

The 2015 Dodge Hellcat is a good indication of the maximum level of equipment available. Among the standard Hellcat features are admission to a one day performance driving school, adaptive damping, electronic roll mitigation, Park Assist, blind spot and cross path detection. There is also an SRT performance information system, heated and ventilated front seats, heated steering wheel, heated second row seats, Uconnect?, 20-inch forged wheels and bi-function HID projector headlights. Option packages include Laguna leather and high performance seats, Harman Kardon? audio, sunroof and navigation. The Hellcat is the top of the Charger lineup and has a base price of $63,290, after the destination charge, and $69,165, with all options. But for the level of feature and performance, it?s the best luxury performance value in the U.S. market, and possibly in the world. This is a car that has unofficially accelerated from 0 to 60 mph, using drag slicks, in under three seconds, and has a top speed of 204 miles per hour. And on the flip side, it?s an excellent five-passenger family car ? comfortable, quiet, and easy to drive. It also can get 22 mpg — it may be the car enthusiasts have dreamed of. 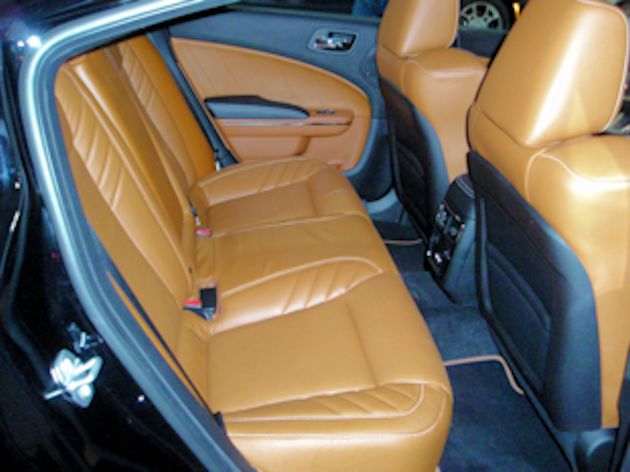 Obviously the Charger Hellcat is not a car for the masses, and only a select group of enthusiasts will go that direction, but the rest of the fleet is just as exciting. I was especially impressed by the V-6 models, they are quick, fun-to-drive, and the rear- drive model has an EPA fuel economy rating of 19 mpg city and 31 mpg highway.
The 2015 Dodge Charger is completely different, it?s available any way you want it and it?s the kind of car that people will probably buy if they take the time to drive it. For more details on the 2015 Dodge Charger go to http://www.dodge.com/en/reveal/charger/ . 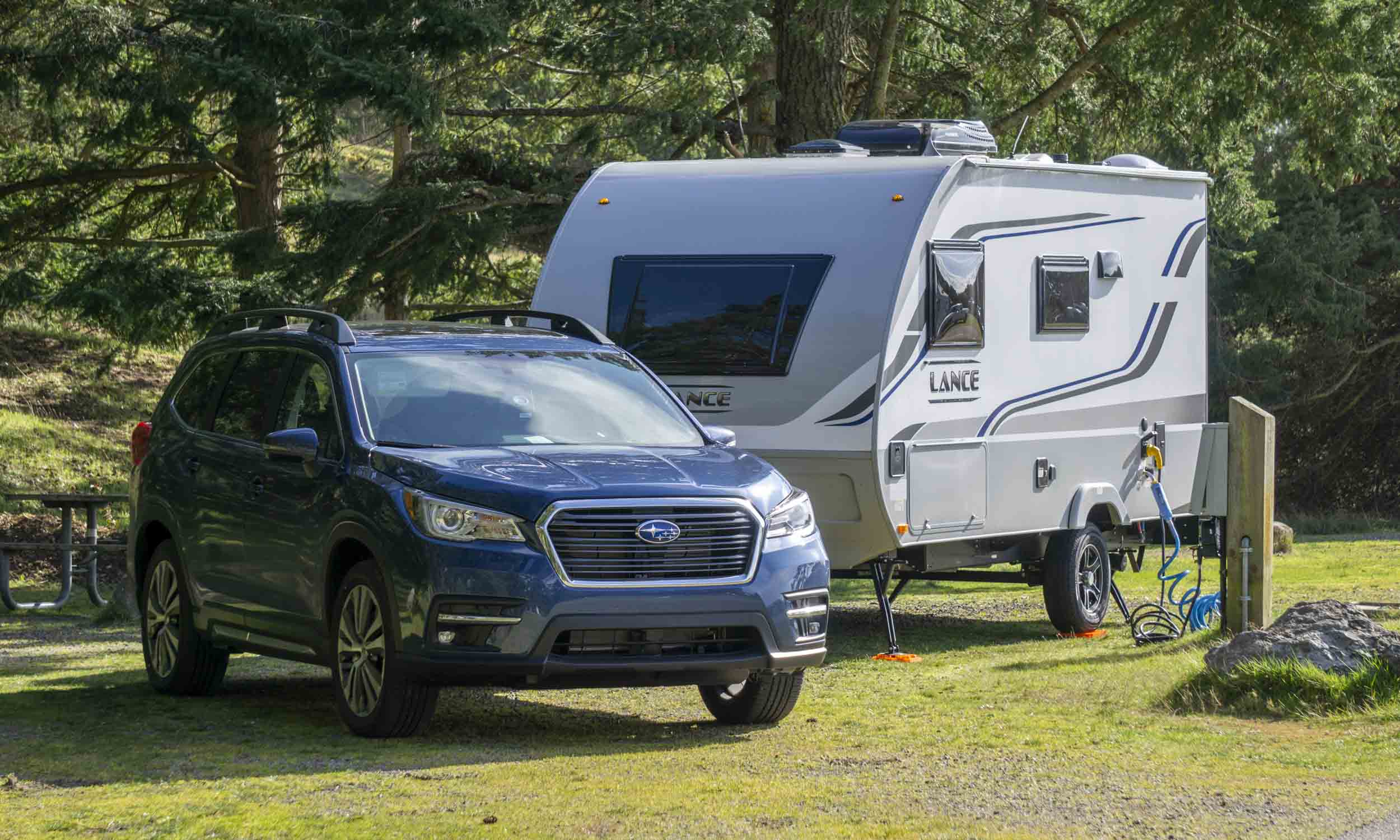 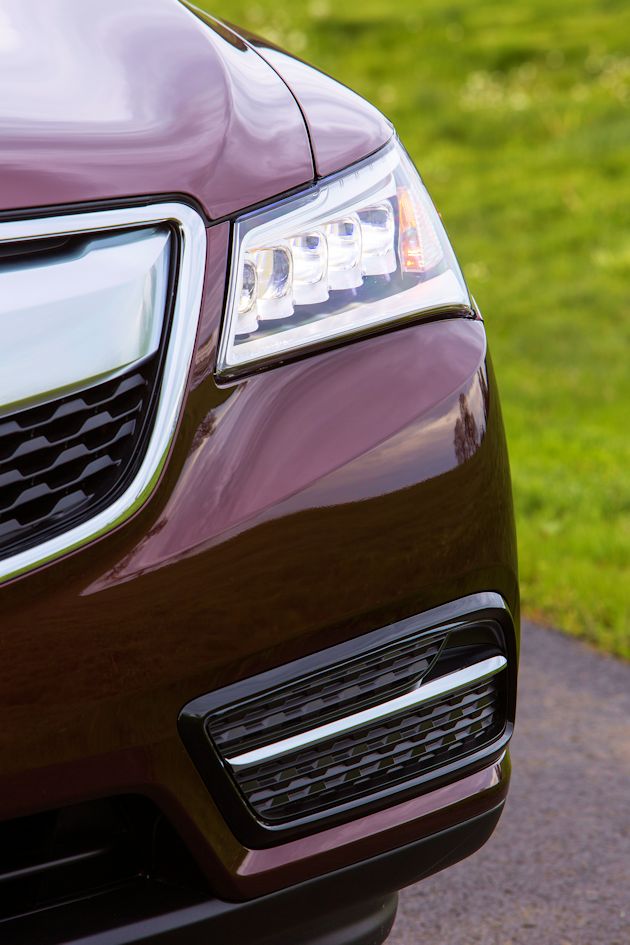