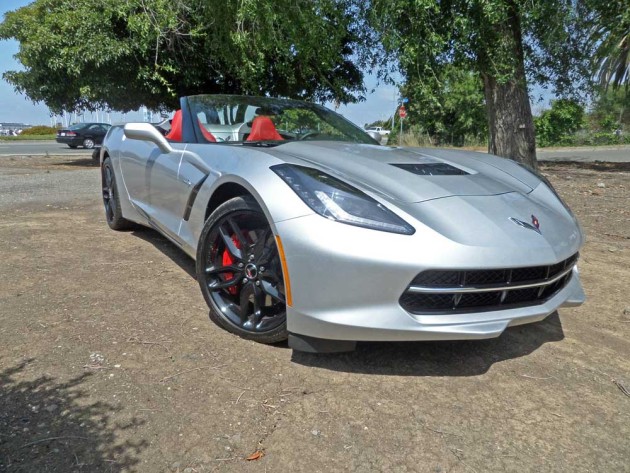 The 2015 Chevrolet Corvette Stingray Convertible is a two-seater, and may be ordered as either a convertible, or as a coupe with a targa-type top. The convertible top is an electronic powered, fully automatic affair that operates at speeds up to 30 mph in a mere 18 seconds, and it?s also operable via the keyless access remote. The pricing for the Chevrolet Corvette Stingray Convertible Z51 starts out at $64,000. Both Coupe and Convertible models share a nearly identical curb weight (with the convertible tipping the scales at 64 pounds more) as well as identical chassis tuning and performance technologies. Construction materials consist of the aluminum frame, a carbon fiber hood and removable roof panel (in the case of the Stingray Coupe), composite fenders, doors and rear quarter panels and carbon-nano composite underbody panels, all of which contribute to the car?s optimal, nearly 50/50 weight distribution (48 front/52 rear). 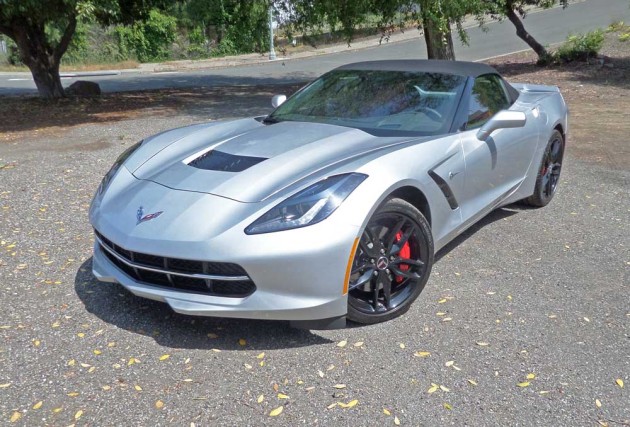 Chevrolet gave birth to the first Corvette back in 1953. It was, as probably everyone knows, a fiberglass-bodied sports car created for the open-air crowd. Well, it was at least sporty looking for its time, but in today?s sports car arena, it would be probably be laughed at ? not for it?s styling mind you, but for its performance potential or the lack thereof. That first example Corvette was powered by an inline Stovebolt ?Blue Flame? six-cylinder engine that mated to a cast-iron, three-speed Powerglide (not-so lovingly dubbed ?Powerslide?) automatic transmission that metered the driving force to the rear wheels. It was a two-seat roadster with a cloth convertible top and an optional, removable hardtop that came later. The bow-tie team has continued to evolve the Corvette into a true sports car to be reckoned with. The first Stingray appeared as a 1963 model. The latest iteration of the seventh generation (C7 version) ? the 2015 Chevrolet Corvette Stingray is living proof of the iconic car?s magical evolution. 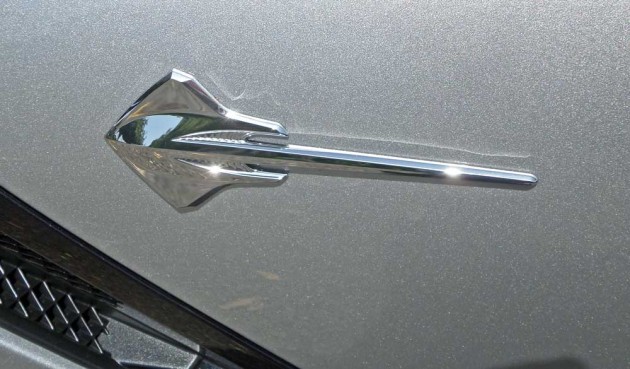 Nestled in an aluminum frame that weighs less, and is stronger than the previous steel frame, is the most powerful and most efficient standard engine to be found in a Corvette to date. It is a 6.2-liter LT, OHV, 16-valve, pushrod V8 with Direct fuel Injection that resides up front in a longitudinal orientation and produces 460 horsepower at 6,000 rpm, while developing 465 pound feet of torque at 4,600 rpm with the available performance exhaust. The engine meters its driving force to the rear wheels through either a new 7-speed manual gearbox, with Active Rev Match technology via steering wheel mounted paddles, or an 8-speed automatic transmission with paddle shifters for manual gear changes. It is rated as one of the most efficient sports car on the market with an EPA estimated 16-mpg city and 29-mpg highway. No other car offers more than 455 horsepower and greater than 29 mpg on the highway. Despite the fuel economy efficiency, the new Corvette Stingray Convertible is capable of rocketing from 0-60 mph in a mere 3.8 seconds and of reaching an electronically limited top speed of 185 mph. 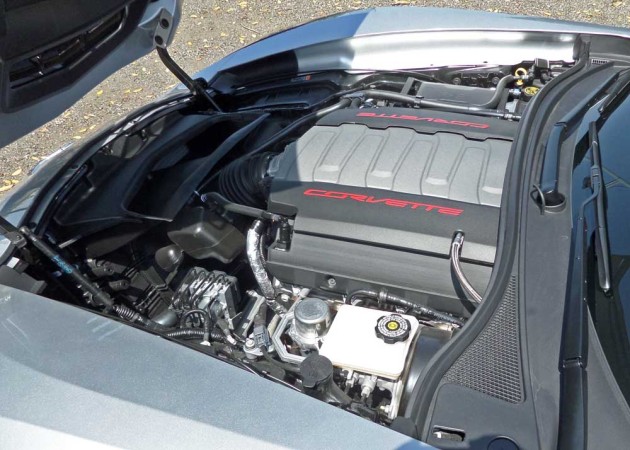 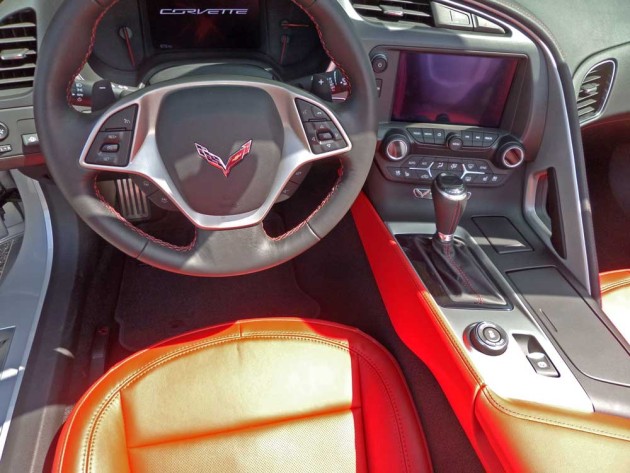 At the heart of the Corvette Stingray Convertible?s driver-focused technologies is a cockpit-mounted Driver Mode Selector, that allows drivers to optimize the car to suit their driving preference and road conditions through a choice of five settings: Weather, Eco, Tour, Sport and Track, which ultimately tailors 12 vehicle attributes. The Driver Mode Selector is an easy to use rotary knob near the shifter. The Tour mode is the default setting for everyday driving; Weather mode is designed primarily for added confidence while driving in inclement or slippery scenarios; Eco mode is for achieving optimal fuel economy; Sport mode facilitates spirited road driving, and the Track mode is obviously for track use. The Corvette Stingray is actually three cars in one, providing the comfort and functionality of a long-distance GT car, the connectedness and infotainment of a daily driver, and the acceleration, grip and braking of a capable track car according to Harlan Charles, Corvette product manager. ?With the Driver Mode Selector, we wanted to give drivers an easy way to tailor virtually every aspect of the car to fit their driving environment. The result is a more rewarding, more confident experience, whether you?re commuting in a downpour or charging through the corkscrew at Laguna Seca.?

The twelve performance parameters that are adjusted with each mode selection include: Gauge cluster configuration: with the Tour, Eco and Weather modes featuring displays for trip data, audio and navigation; the Sport mode showing classic, easy-to-read sports car gauges; and the Track mode?s configuration showing a gauge design based on the Corvette Racing C6.R race car display with a lap timer; ETC (Electronic Throttle Control): Adjusts the throttle input curve for the selected mode for improved responsiveness; Paddle-shift automatic transmission that adjusts shift comfort and shift points; Active Fuel Management: in normal mode, the LT1 engine uses V-8 power; in Eco mode the engine is able to operate in V-4 mode to improve fuel economy until aggressive acceleration is called for; Exhaust (active exhaust system) adjusts the timing of the electronically controlled exhaust valves to enhance audible feedback from the V-8 depending on the drive mode; Electronic limited-slip differential (Z51) adjusts the rate at which the limited slip engages, balancing between steering response and stability in different driving conditions, such as more aggressive performance in Sport and Track modes; Steering Assist effort is adjusted in the modes to provide the driver with the correct steering feel for the driving condition; Magnetic Ride Control adjusts shock damping based on road conditions, from optimized comfort to performance driving; Launch control is available in Track mode for manual and automatic transmissions, providing maximum off-the-line acceleration; Active handling (StabiliTrak stability control) provides a ?competitive? setting, available in Track mode that?s more suited for on-track conditions. It can also be disabled, giving the driver complete control; Traction control, where Weather mode tailors traction control and engine torque for driving in inclement conditions; Performance Traction Management, available in Track mode offering five settings of torque reduction and brake intervention for track driving. 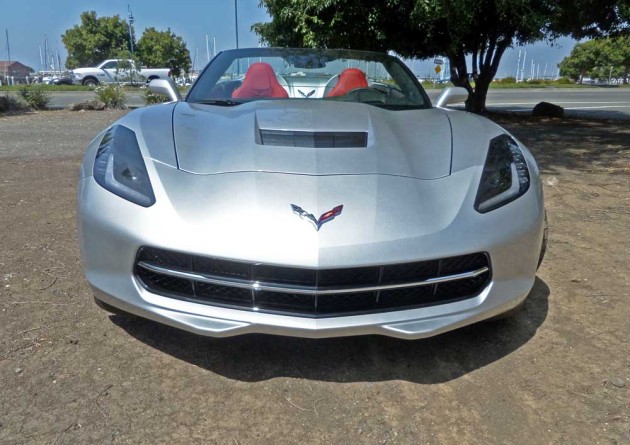 The 2015 Corvette Stingray Convertible is visually provocative and stimulating. With styling that is not only elegant, but functional as well. The design goal was to make a bold statement, embracing the car?s advanced technology, while enhancing its overall performance from the wind tunnel to the track. It breaks new ground, while remaining true to elements that define a Corvette as a Corvette. No single detail was repeated from previous generations, and the new Corvette Stingray includes the distinctive profile defined by a long dash-to-axle ratio ? a low, lean proportion that?s emphasized even more on the convertible. The greenhouse suggests the canopy of a fighter jet with dual-element taillamps. Designers built on this foundation, a form vocabulary from two dissimilar sources: aerospace and nature. The dual-element taillamps represent the greatest departure from tradition and are among the car?s most dramatic elements. The three-dimensional, sculpted lenses house innovative indirect LED lighting. The state-of-the-art lighting uses hidden LED lamps that cast their light up from the bottom of the housing into a reverse reflector, creating an even glow. LED lamps are also used for the white backup lamps. The taillamps integrate functional aircraft-style air outlets for the available differential and transmission coolers. The centered quad exhaust outlets hint at the car?s performance potential. 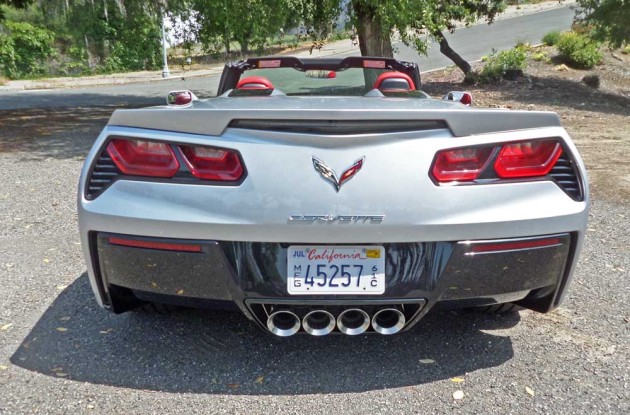 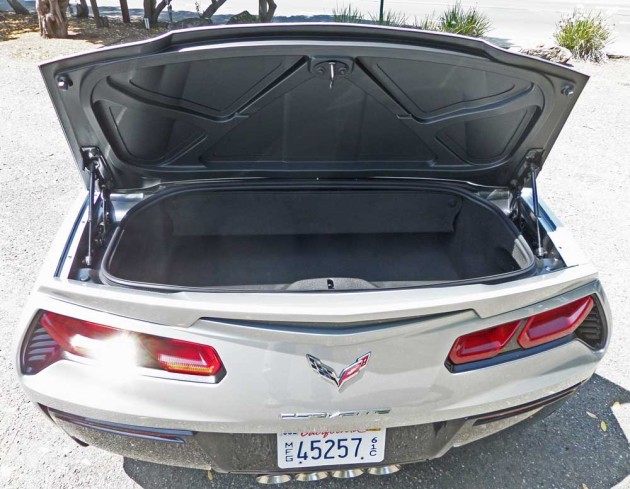 The interior combines fine materials and craftsmanship with advanced technologies that contribute to a more connected and more engaging driving experience. Each of the interior?s features and details were designed to enhance the driver?s connection to the car, beginning with the fighter jet-inspired wraparound cockpit; and continues with the smaller 14.1-inch diameter steering wheel, more supportive seats, and high-definition, configurable screens. Two seating choices are offered: a GT seat for all-around comfort and a Competition Sport seat with more aggressive side bolstering that provides greater support on the track. The frame structure for both seats is made of magnesium for greater strength and less weight than comparable steel frames. There?s a steel-reinforced grab bar on the center console for the passenger and soft-touch materials on the edge of the console, where the driver naturally braces during high-load cornering. High-performance driving influenced elements of the configurable display screens and available head-up display, which vary depending on the driving mode, including the Track display inspired by the C6.R.
All models feature a fully-wrapped interior, where all surfaces are covered with premium, soft-touch materials. Available materials, depending on the trim level, include Napa leather, aluminum, carbon fiber and micro-suede. 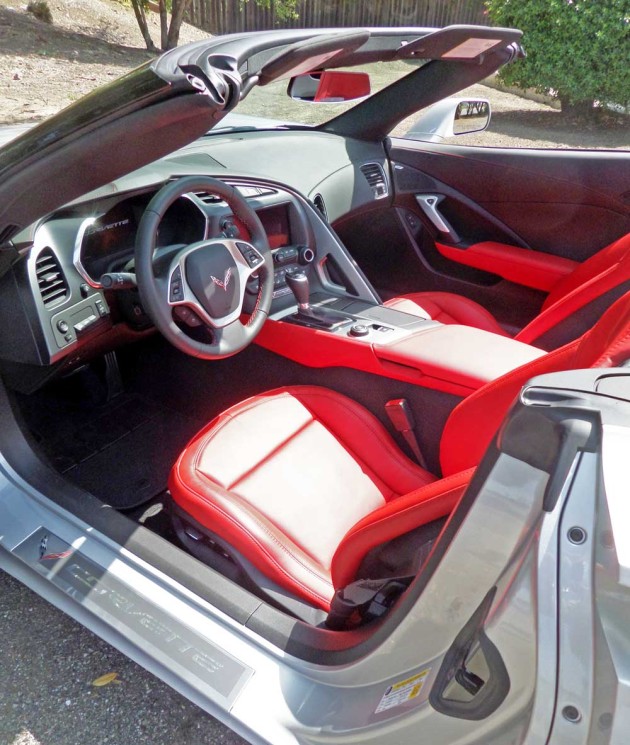 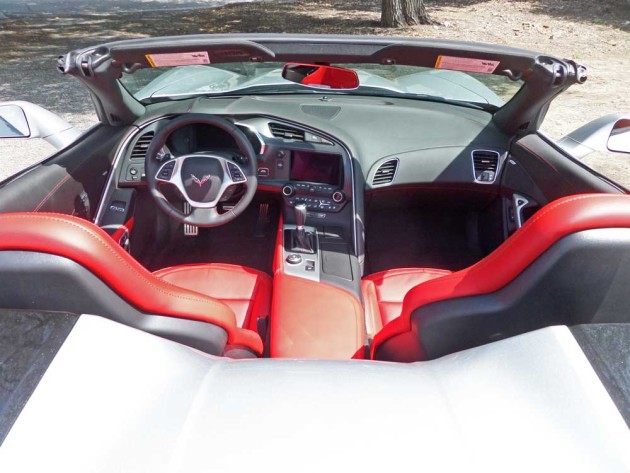 I was able to test last year?s Chevrolet Corvette Stingray Convertible at the national press introduction in and around the mountains in Palm Springs, CA. The base price of the Laguna Blue tintcoat test Convertible with a Gray interior and top was set at $58,800 with the Z51 Performance Package and 7-speed manual gearbox. Other options and Destination Charge elevated the final price tag to $75,000. The Z51 Package delivers 5-?V?-spoke, Black painted alloy wheels and a full width decklid spoiler, along with tweaked suspension, while the base model Stingray Convertible comes with 5-single-spoke alloy wheels and an abbreviated center mount decklid spoiler. My 2015 test Corvette Stingray Convertible sported a Blade Silver Metallic exterior with a Black top and an Adrenaline Red and Black interior, the 8-speed auto gearbox with paddle shifters and the Z51 Performance Package with the performance exhaust. The base sticker was set at $64,000. Which came to $75,560 after factoring in the Magnetic Ride Control with PTM, Performance Data and video recorder including navigation, the 8-speed paddle shift automatic transmission, custom caliper brake color, Black painted aluminum wheels and Destination charge. 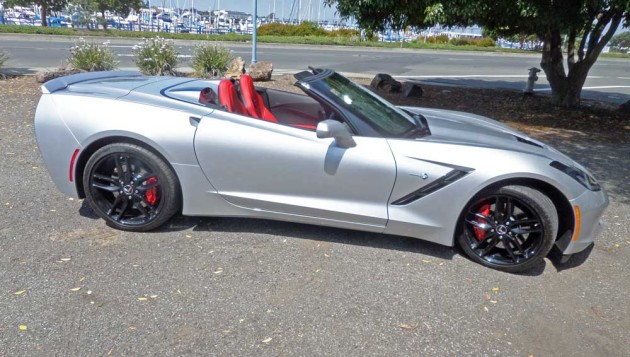 SUMMARY: The 2015 Corvette Stingray Convertible, along with its Coupe stable mate are clearly the best production Corvettes ever. Essentially, the Stingray is engineered to race, but it?s also built for on-road driving enjoyment. It boasts a better power to weight ratio than Audi?s R8 and Porsche?s 911 Carrera.

The Corvette Stingray Convertible is, in a word, incredible. Other words that come to mind would be phenomenal and awesome. It behaves in a docile and civilized manner when called upon to do so, but it is also a screamer when poked and prodded with gusto. It handles with both an athleticism and preciseness never before available in a Corvette. It rides comfortably, when simply cruising, but may be firmed up for track exercises or more aggressive driving when the mood strikes. 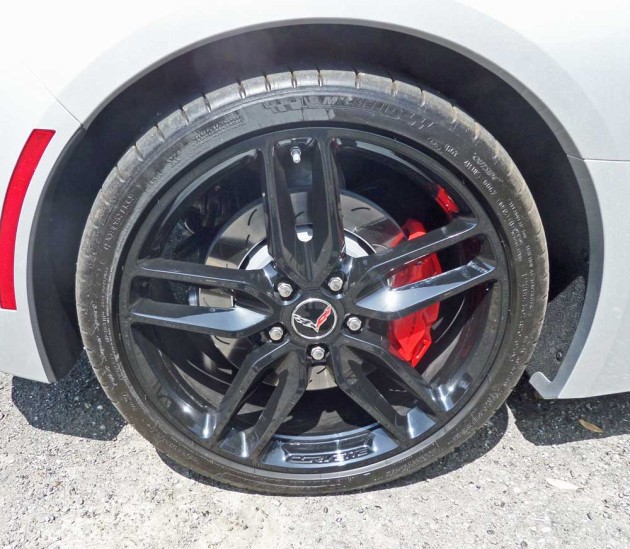 Photographs don?t really do the Stingray justice ? it is not only a purposeful and functional design, it is also stunningly gorgeous. Yes, there are some Corvette purists who feel that the new headlight and taillight treatment violates the heritage and purity of the iconic sports car, but I disagree vehemently. Everything about this seventh generation ?Vette represents a step up. I have my past favorites too, such as that first 1953 example; the 1957 four-speed, fuel injected model. Another early favorite is the 1962 Corvette, but it?s clearly time to move on, and I choose the Corvette Stingray Convertible for its open air motoring, which unquestionably performs best in the Track mode. 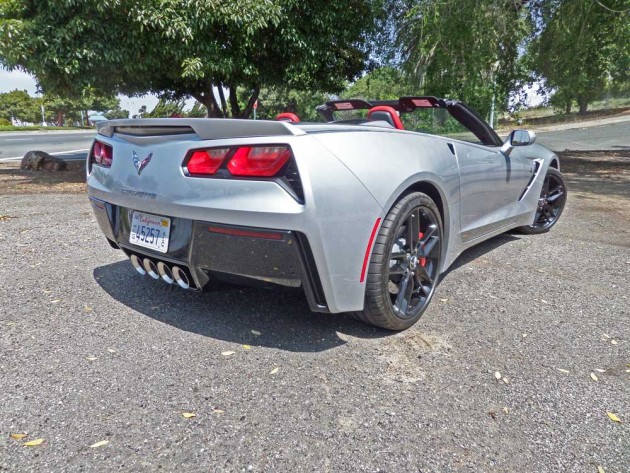 A note of interest, there are a couple of special Stingray models for the 2015 model year – new models include the Corvette Stingray Atlantic and Pacific Design Packages. The distinctive Atlantic and Pacific Design Packages illustrate the personalization range of the Corvette Stingray, and are designed to showcase how it may be configured as a luxury sport GT car (Atlantic) or as a high-performance motorsport car (Pacific).

The 2015 Chevrolet Corvette Stingray Convertible is built at GM?s Bowling Green, KY assembly plant. If it?s possible for you to find a better high performance car at a more attractive price, then you should definitely buy it.