?2015 BMW R nineT?
A comfortable Sport Roadster for Two (or not) 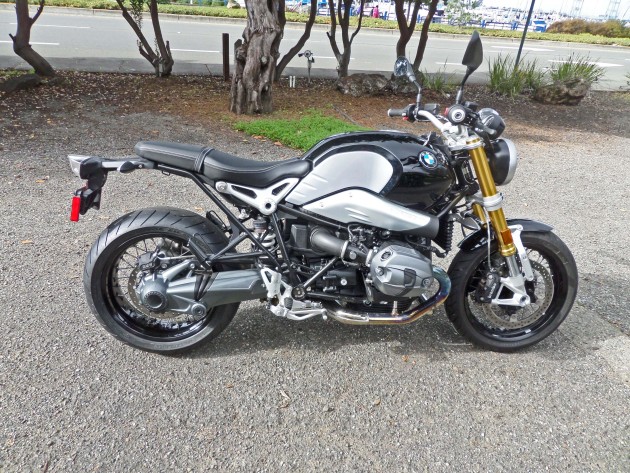 BMW has come up with a unique bike that is in a class of its own. In conventional terms, it defies traditional categorization. The 2015 BMW R nineT was specially developed to commemorate BMW?s 90 years (hence nineT) of building motorcycles – motorcycles that were generally considered to be large sport touring machines for older gentlemen. 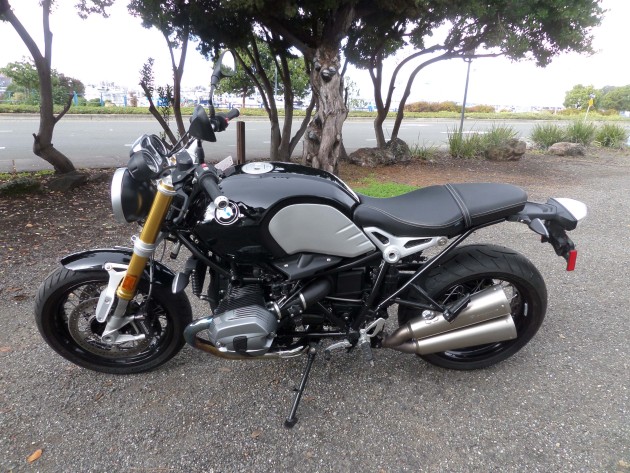 The BMW R nineT exhibits a purity of design and power, while combining the iconic character of the boxer engine and classic styling traits of motorcycles from a bygone era with state-of-the-art technology in a modular form that invites a host of personalization and customization opportunities. 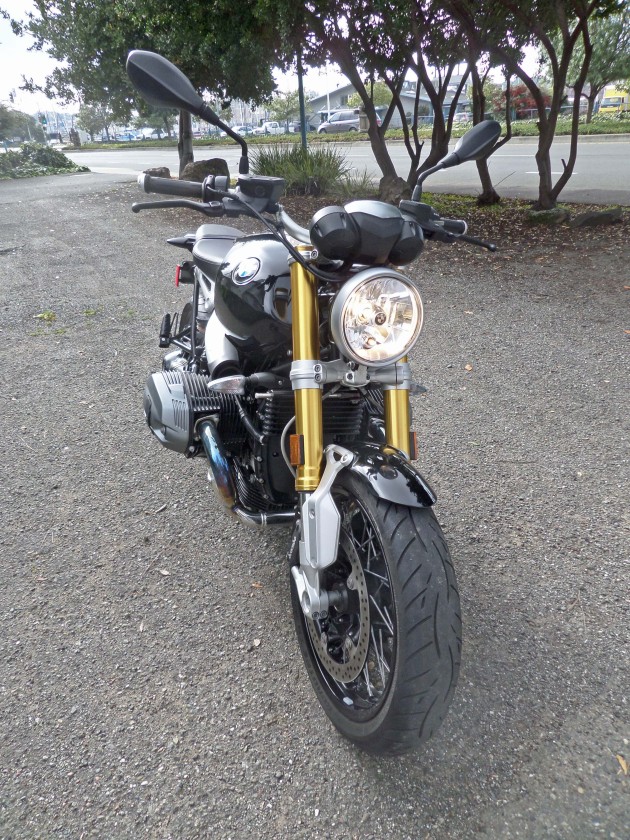 As with BMW?s first-ever motorcycle, the legendary 1923 BMW R 32, the BMW R nineT draws its motive force from a classic flat, opposed twin boxer engine that serves up rapid acceleration off the line. It may well represent the most significant departure from anything that BMW Motorad has brought to market yet. The R nineT draws upon influence from the Concept 90, a partially-faired tribute to the RS90S that was victorious in the first AMA Superbike Championship in 1976. The Concept 90 show bike blended BMW?s expertise with that of noted SoCal designer Roland Sands and was unveiled at the 2013 Concours d?Eleganza Villa d?Este in Italy.

With the production R nineT approaching completion, a group of four designers ? three European custom builders and Sands were given the freedom to customize a bike as they saw fit. The resulting examples were shown globally at a series of custom bike shows. The bike was envisioned as a blank canvas for personalization rather that as a nostalgic caf? racer, chopper or naked bike. 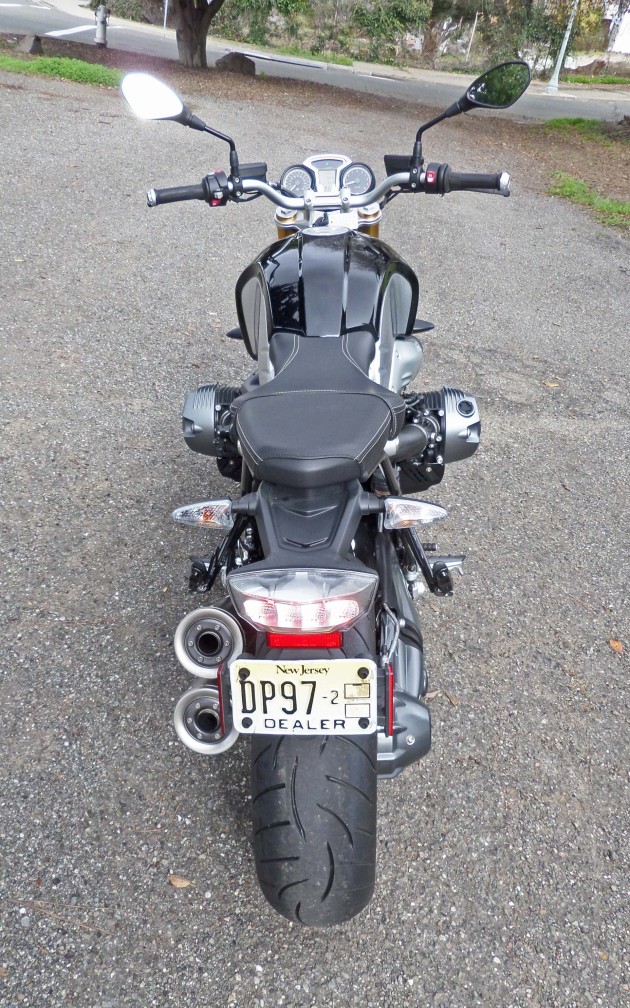 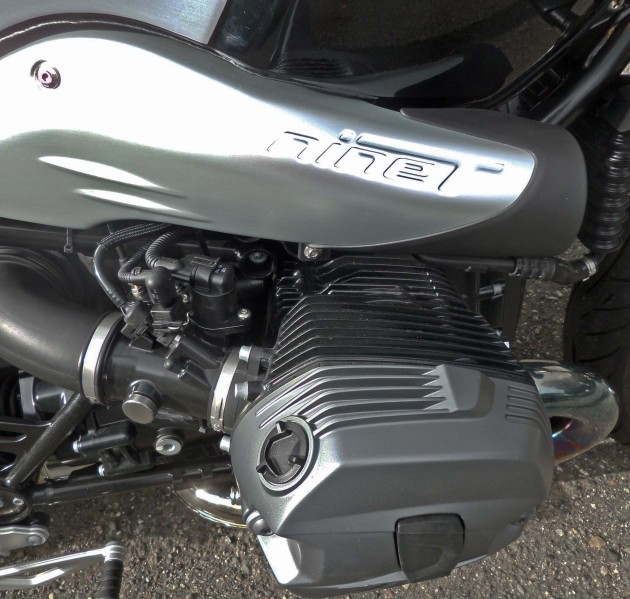 The R nineT?s engine is an 1170cc DOHC, 8-valve, flat twin, oil/air-cooled Boxer (horizontally opposed) with Akrapovic twin-pipe left-side exhaust featuring an acoustic, electric servomotor operated valve and opening and closing cables. It produces 110 horsepower at 7,550 rpm along with 88 pound feet of torque at 6,000 rpm. Energy is geared to the rear wheel through a six-speed sequential manual gearbox via a cardan shaft drive unit as the final drive. Suspension componentry consists of Premium Gold anodized inverted forks with 4.7-inches of wheel travel up front and a Paralever, single-sided swingarm with a central spring strut and 4.7-inches of wheel travel in the rear. There?s a steering damper rod to aid in stabilization. 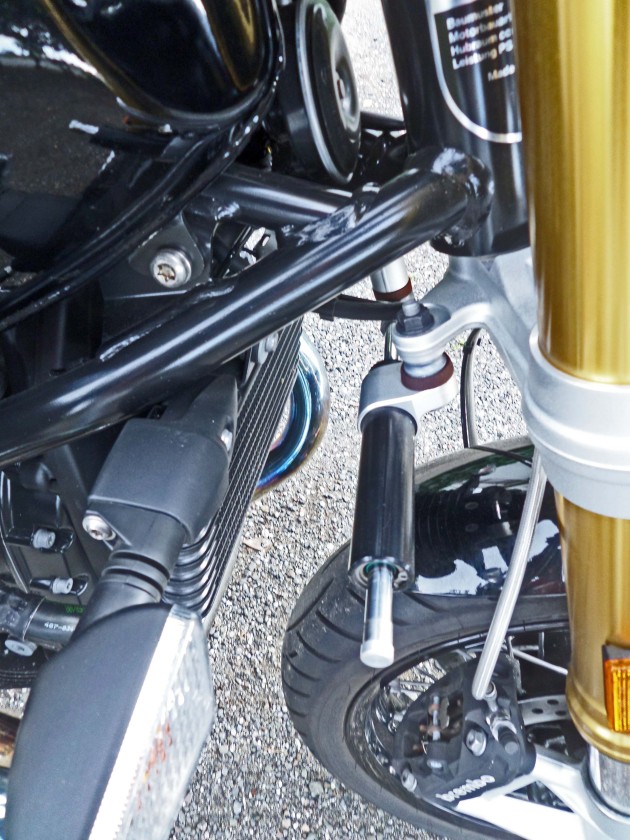 The bike was designed as an all-out roadster, and follows in the tracks of past role models featuring stainless steel wire-spoke wheels with black anodized alloy, non-flanged rims. Tires are Continental RoadAttack 2C -120/70 ZR17 up front / 180-/55 ZR17 aft. Fitted with tubes. The nineT also has enough room between the mufflers and swingarm that the standard 5.5-inch-wide 17-inch wheel may be replaced with a 6-inch-wide version. 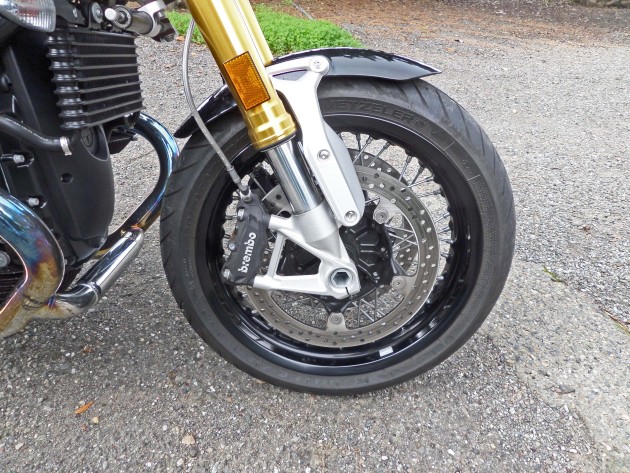 Slowing or bringing the R nineT to a halt are radial, four piston monobloc Brembo calipers paired to dual floating 320mm discs for the front wheel with a single 265mm disc with a twin-piston floating caliper for the rear wheel. BMW Motorad ABS is standard. 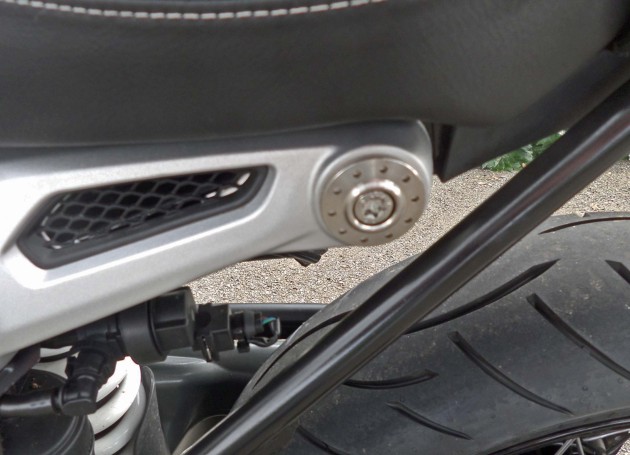 The R nineT’s customizability is largely due to its special frame concept. The tubular steel spaceframe that was specially developed for the nineT incorporates the boxer engine as a load-bearing element. The frame?s basic construction consists of a front frame section with an integral steering head and a rear section with the swingarm mounting. The pillion frame is removable, by undoing the 8 bolts that hold it in place, allowing the nineT to project a stylish design whether riding solo or two up. With an available, special accessory aluminum tail cover, the nineT showcases a look reminiscent of early caf? racers. A circular headlamp with the BMW logo in the center of the bulb cover pays tribute to previous role models from 90 years of BMW Motorrad. The paint finish is a classic Black Storm Metallic with contrasting silver and metallic highlights that were chosen to complement the nineT?s character. A modest tool kit resides beneath the rear seat, which is removable with a special Torx wrench key. 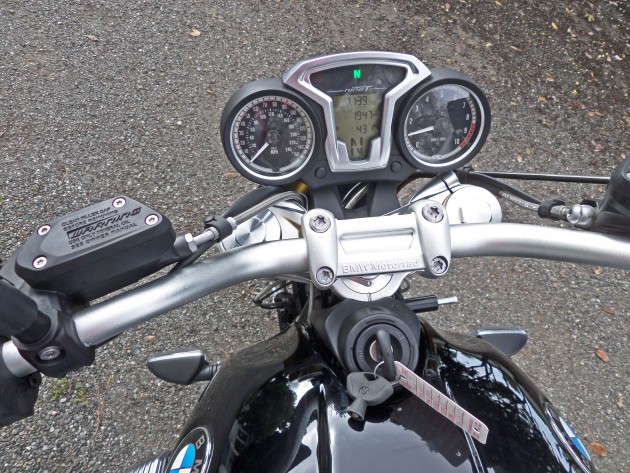 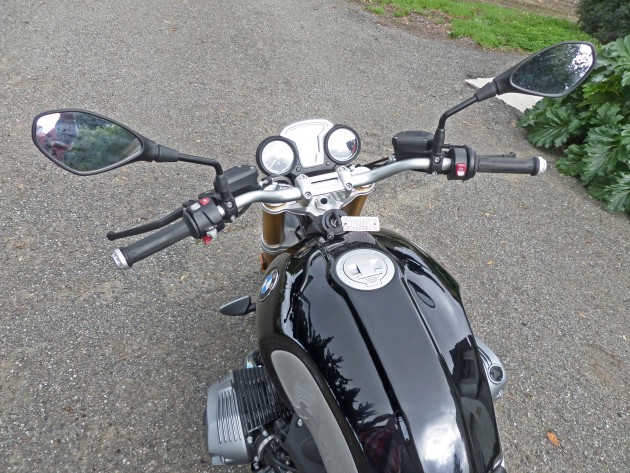 The instrument cluster, houses two classic round speedometer and tachometer gauges, smoothly and harmoniously integrated into the overall front-end design. The gauge?s simple styling reflects the classic inspiration behind the nineT?s engineering, while at the same time incorporating the convenience and amenities of modern technology. For example, the nineT comes equipped with an onboard computer that shows key information including: time of day; engaged gear; remaining range; trip mileage; servicing interval; as well as average speed and fuel consumption ?in a large, clear segmented display. 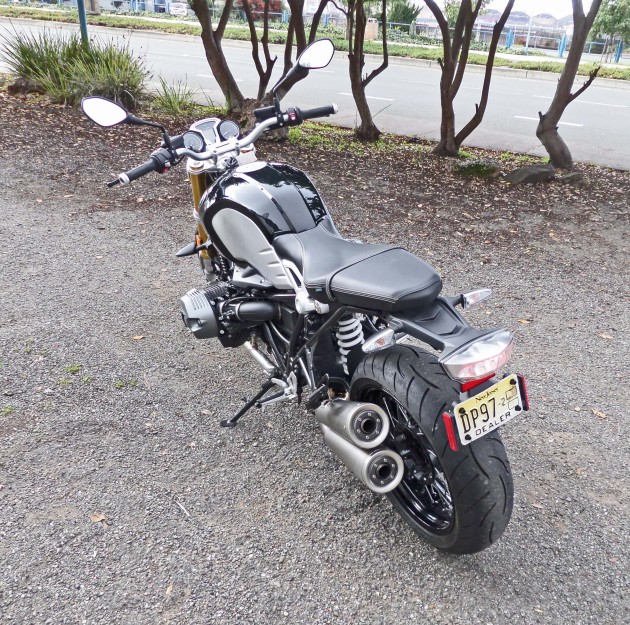 The bike?s electrical system is specially configured for enhanced technical flexibility, allowing for the installation of alternative electrical components, such as headlights or turn indicators.

SUMMARY: The BMW R nineT leaves the factory in the form of a classic, sporty roadster capable of carrying two people. Despite the low 30.9 inch rider?s seat height and narrow straddle width, both rider and pillion passenger can enjoy comfortable seating. An optional comfort rear seat provides not only a larger seat area, but also extra cushioning for the passenger. 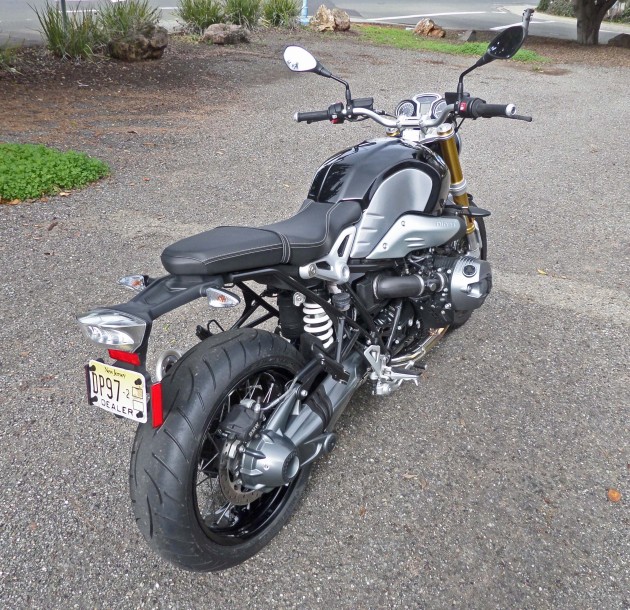 The 1170cc flat-opposed-twin motor is indeed torquey, and the 110 horses make their presence known even when first firing the bike up. There is a strong right side thrust. Acceleration is smooth and steady over a broad range however, and the final shaft drive is void of any jacking effect found in many other similar setups. The exhaust note is melodious and authoritative rather than raucous.

The riding position is ideal for a wide rang of rider physiques ? the bars are well positioned, the seat well placed and the foot controls are comfortably located. The ride quality is both compliant and comfortable, and it is easily maneuverable and well-balanced. There will be some riders who will compare the BMW R nineT to a Ducati Monster, and that may not be a bad thing at all.

The two-piece rear seat may be removed using a second special Torx bit ?key? for access to a very limited tool kit.

The R nineT provides the ideal pallet for personalization with BMW Motorrad?s range of special bike accessories specially tailored to the nineT?s overall character, which may be installed by authorized BMW Motorrad dealers or by customers themselves. Special accessories include: a Tank Bag with attachment system; a Rear bag with attachment system; kneepads for tank sides; an aluminum tail cover with padded backrest; a custom rider?s seat with R nineT logo; a Comfort rear seat; an HP Carbon cover for the engine block; an HP Carbon front fender; a Titanium Akrapovic exhaust system; a Connector pipe, short or long, with bracket and cover for Akrapovic high or low mounted silencer/muffler; an Anti-theft alarm system; heated grips; LED turn signals; and a Mounting cradle for BMW Navigator, with connection to the electrical system.

In the final analysis, the 2015 BMW R nineT represents a breath of fresh air for BMW?s bike production. It not only looks great, it is great fun to ride, with its blend of old school flavor and up-to-date technology. 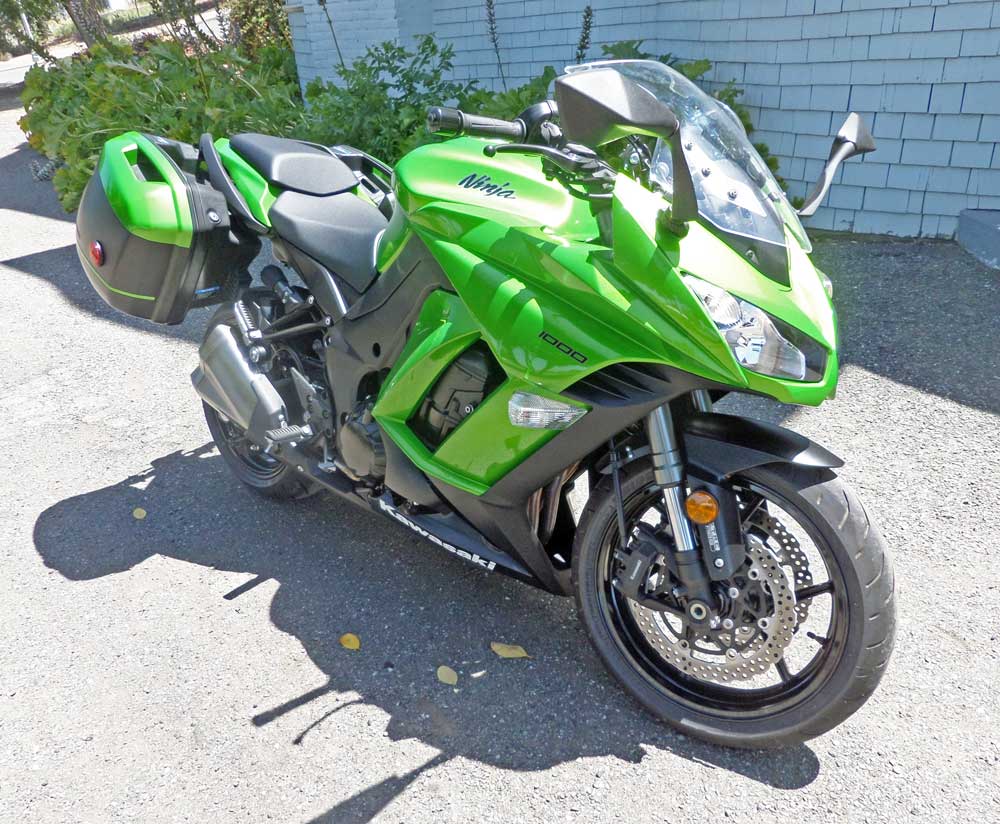