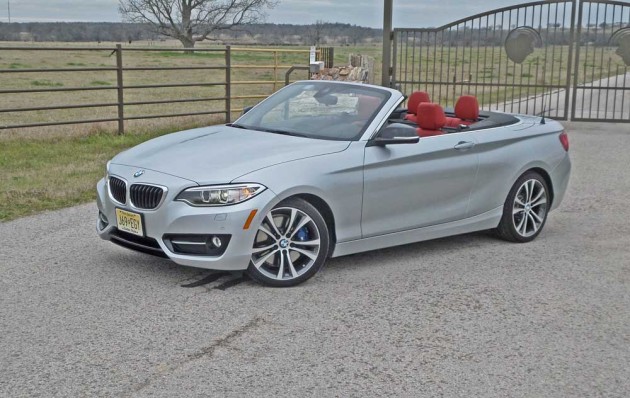 When BMW introduced the 2014 2-Series Coupe, it heralded a new dimension evolved from the iconic 2002 that bowed more than four decades ago. The original BMW 2002 gave birth to the concept of a sub-compact two-door that served up plenty of power for its day in a unique rear-wheel drive sport coupe, engineered and built with German precision. That new BMW 2-Series coupe lineup consisted of three models – the BMW 228i, BMW 235i and BMW M235i. As with the first 2002 and the new 2-Series stable, there was no convertible model offered. Thankfully that void is over. Now there’s a gasoline BMW 228i Convertible and M235i Convertible (or Cabrio as they are known abroad), with a diesel version available in other global markets. The sub-compact 2-Series sport coupes emerged from Bayerische Motoren Werke AG, to replace the BMW 1-Series Coupe on our shores, which had established a standout position among class rivals with its rear-wheel drive concept and potent engines featuring BMW TwinPower Turbo technology, blended with an alluring premium persona. 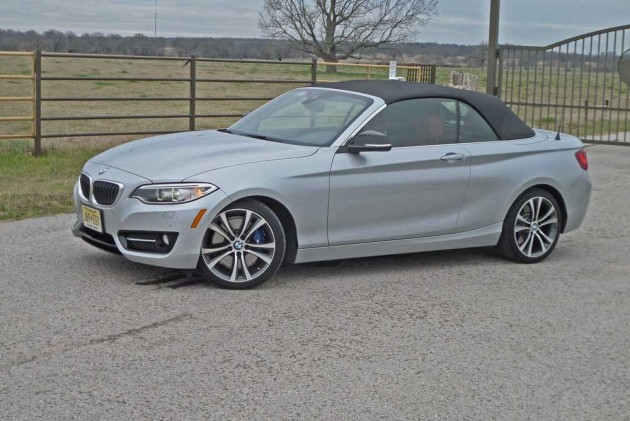 The BMW 2-Series Coupe raised the bar in the premium sub-compact segment in terms of its dynamic driving ability, aesthetic and emotional appeal. It represented a distinctive vehicle concept unique in its segment, with a typical BMW Coupe two-door body in a classic three-box design, with seating for four, rear-wheel drive and a pair of engines and chassis set-up with the focus squarely on sporting ability.

Now the new BMW 2-Series Convertible lineup features the same basic dimensions as the Coupe models with the same powerplant offerings. xDrive, BMW?s intelligent all-wheel drive system, will be available for both 228i and M235i droptops, along with a new Track Handling Package for the 228i, which lowers the stance of the vehicle by 10 millimeters, and includes BMW?s Adaptive M Suspension, Variable Sport Steering, M Sport Brake and Michelin Pilot Super Sport tires on 18? wheels. Cost for the Track Handling Package is $2,200 for models without M Sport or Sport Line and $1,600 for M Sport or Sport Line models. 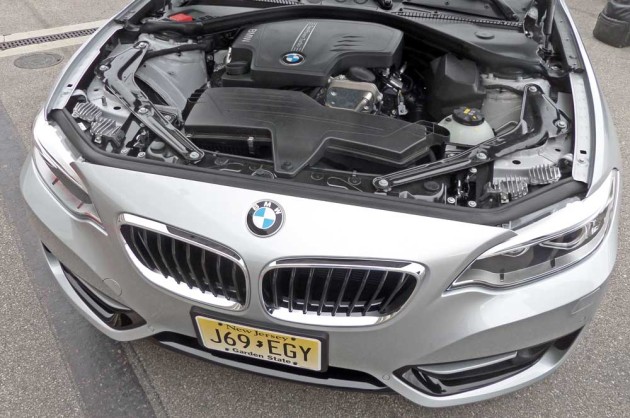 Powering the BMW 228i Convertible is a 2.0-liter, DOHC, 16-valve BMW TwinPower Turbo inline 4-Cylinder engine with high-precision direct injection, Double VANOS and Valvetrronic variable valve control that makes 240 horsepower along with 255 pound feet of torque in a range from 1,450-4,800 rpm. The M235i draws its motive force from a 3.0-liter, M Performance TwinPower Turbo inline six-cylinder with Twin-Scroll turbocharging, high precision injection, fully variable valve control (VALVETRONIC) and Double VANOS variable camshaft control. Its horsepower output is 320, and it develops 330 pound feet of torque. The M235i is the first open-top M Performance vehicle to be offered. Both engines are longitudinally mounted up front and both models are rear-wheel drive, with BMW?s xDrive intelligent All-wheel drive currently offered on the 228i Convertible.

Transmission choices include an 8-speed Sport Steptronic Automatic with steering wheel mounted paddle shifters for the 228i and 228i xDrive models or a six-speed manual gearbox for the 235i.

A top speed of 130 mph or 155 mph when adding either Sport Line or M Sport option packages. Efficiency is enhanced through BMW EfficientDynamics technology, which includes Air Curtains and the Auto Start/Stop function in conjunction with both manual and automatic transmissions; ECO PRO mode is activated via the standard Driving Experience Control switch and includes a coasting function with the 8-speed automatic transmission. 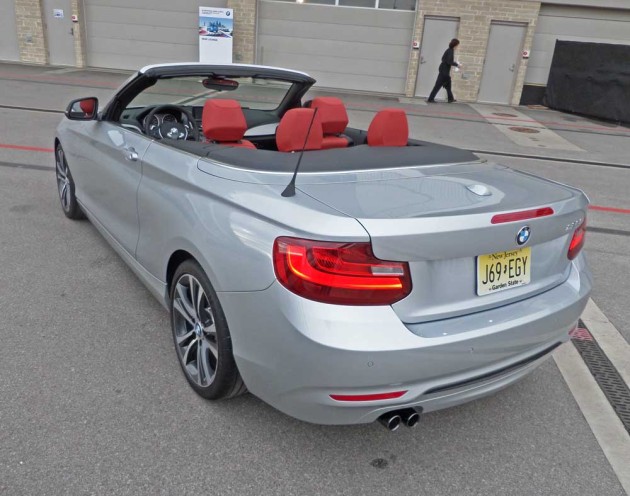 Both versions of the BMW 2-Series Convertible display a sporting presence, and athletic agility combined with an evocative and emotional exterior design. The defining elements of its interior, meanwhile, include a driver-focused cockpit design with a contemporary brand of functionality. The car?s distinguished design identity illustrates its forward progress, reflecting the Ultimate Driving mantra in a more concentrated and intense form than ever before. The cloth power top lowers or raises in a mere 20 seconds at speed up to 30 mph. 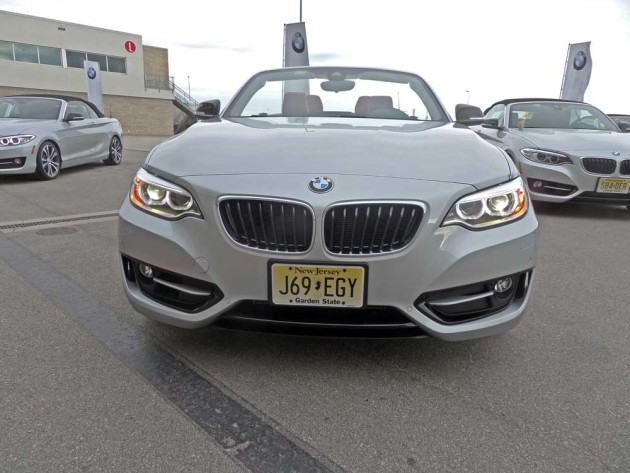 Lines that taper down toward the BMW kidney grille lend the front end a forward-surging presence, and the modified contours of the headlight units, which narrow at their inner extremes, with a standard accent strip (or an LED accent light, if the Adaptive Xenon lights are fitted) cuts across the top of the hallmark BMW twin circular lights. The BMW kidney grille is separated from the headlights by narrow strips on either side, and protrudes clearly from the front of the car, slanting forward at a slight angle. The grille?s three-dimensional surround design and its vertical bars reinforce the car?s bold look. The lower air intake is split into three sections. The two outer elements are particularly large, with their outlines replicating the headlight unit form. Air Curtains are integrated into an additional section at the outer edges of the front apron, channeling the air behind the front fenders, hanging over the wheels like a curtain. In profile, the BMW 2 Series Convertible displays signature brand features such as a long hood, short overhangs, set-back passenger compartment, and door handles integrated into the swage line that blend with specific design elements. A prominent character line above the doorsill sweeps up, aft of the door?s rear edge into the rear wheel arch. The dynamic wedge shape is emphasized by the door sill line itself, which rises up to the rear. The doors feature frameless windows and turn signal indicators are integrated into the side mirrors. 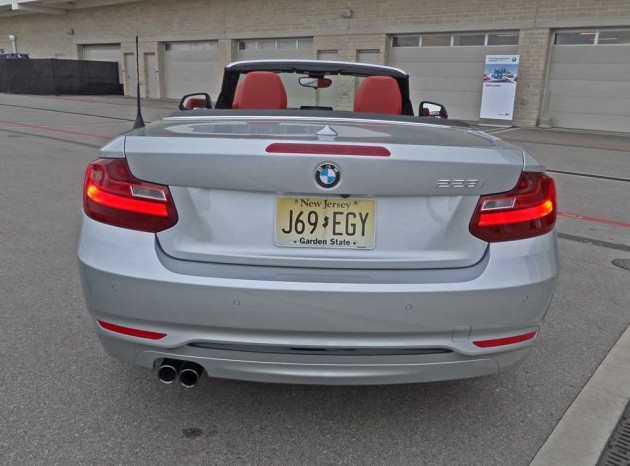 The rear finishes with a broad and powerful stance, reinforced by the single-piece light units reaching into the car?s flanks in a familiar BMW L-shape. An unmistakable night design is provided by the likewise L-shaped LED rear light strips within the units. The third LED brake light is positioned at the upper edge of the deck lid. The lines along the trunk lid sides taper slightly downwards. This styling cue, along with the additional crease and suggested diffuser element in the rear apron, accentuates the Convertible?s road focus and low center of gravity, and yet it also features a wide trunk opening. 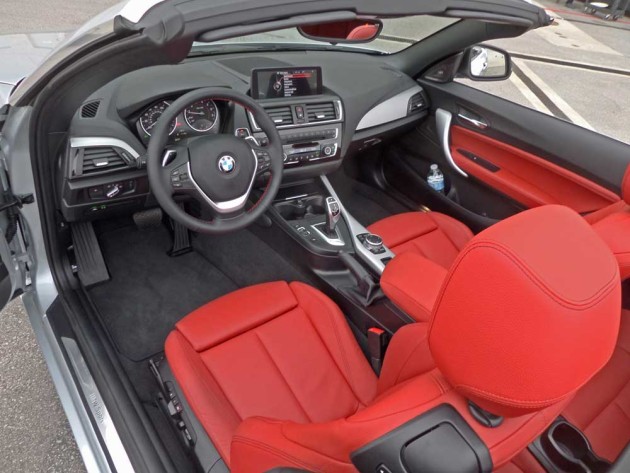 Inside, the Convertible is fitted with the BMW iDrive operating system, featuring a freestanding onboard monitor in flat screen design. The Control Display comes in 6.5 or 8.8-inch form, with Navigation, while the Controller on the center console has a touch-sensitive surface which allows the driver to input characters (if equipped with the Navigation system).

My test BMW 2-Series Convertible was the 228i with the 8-speed Steptronic automatic transmission and xDrive. It sported a Glacier Silver metallic exterior finish and a Red and Black interior with brushed aluminum trim accents.. The base price was set at $37,900, while the as tested price came to $53,825. After adding the Cold Weather Package, Driver Assistance Package, Driver assistance Plus, Lighting Package, Premium Package, Technology Package, Track Handling Package, Parking Assistant Package, Enhanced USB and Bluetooth plus Smartphone integration, Moonlight black Softtop, Harmon Kardon premium sound system, the metallic paint, and the Destination charge. If one is able to live with a very basic example 228i , the bottom line can come in at less than $40,000. 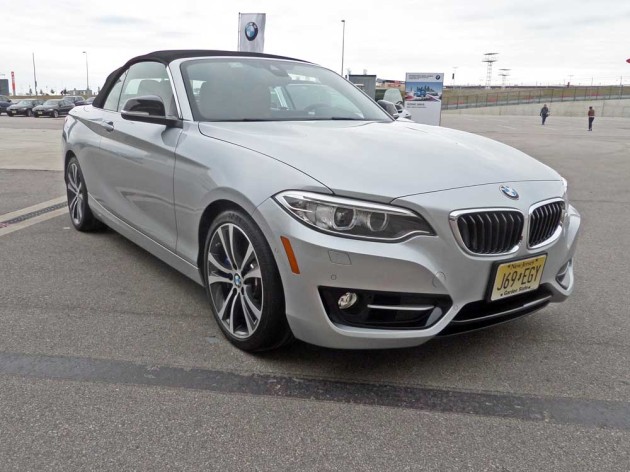 SUMMARY: During the international media launch based in Austin, Texas last year, journalists from around the globe were afforded the opportunity to put the 2015 BMW 228i Convertible and BMW X6M through their paces in normal, everyday driving scenarios, as well as on the challenging Circuit of the Americas (COTA) with its 21 turns and pronounced elevation changes.

The 228i Convertible xDrive is a force to be reckoned with potent 4-cylinder motor in a sub-compact, all-wheel drive vehicle that is indeed indicative of BMW?s ?Ultimate Driving Machine? slogan.

The BMW 228i Convertible is truly a driver?s car that may be piloted in either a normal, docile around town cruising mode, or in all out ?pedal to the metal? fashion. The 8-speed Sport automatic transmission may be operated in a normal comfort mode, a Sport mode, or in an invigorating Sport Plus mode. It may be operated in a fully automatic state, or gears may be selected manually via either steering wheel mounted shift paddles or the console positioned stalk, but it is pleasing in either format or every mode. The Sport and Sport Plus modes deliver stellar performance and response levels as well as pleasing engine and exhaust notes from the left side dual exhaust. 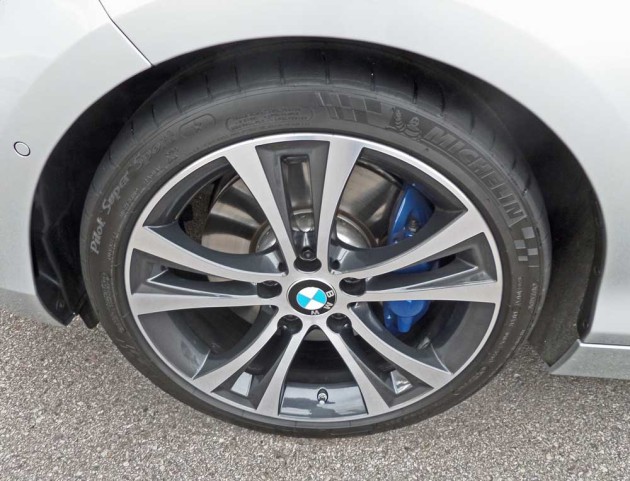 Traction and stability aiding systems may be switched off for highly spirited driving maneuvers by highly skilled drivers, for a thrill ride, drifting experience on track. Acceleration is exhilarating, handling characteristics are ideal, and the ride quality may be adjusted to suit boulevard cruising or hot lapping. The high speed COTA track offered a rare chance to drive on a highly technical course where we were limited to following a lead instructor vehicle at speeds in excess of 125 mph. The new X6M obviously had more to give without even breathing hard, but that?s for a later review. Far less exhilarating was the freeway main street USA test segments. 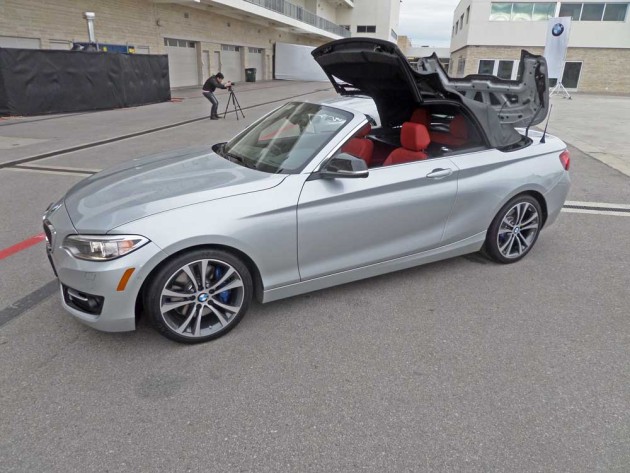 In the final analysis, the BMW 228i Convertible displays an highly emotionally stirring, bold and muscular image (better looking than the 3-Series in my opinion- except for maybe the M version), with power and performance to please along with a reasonable operational efficiency capability and more attainable price range. It is definitely a top player on the sub-compact performance convertible marketplace. After all, it?s a BMW ? the ?Ultimate Driving Machine? and it?s a convertible, which is an added plus. Its M235i stablemate is obviously the hotter ticket, though it was not available for testing during the International media program. 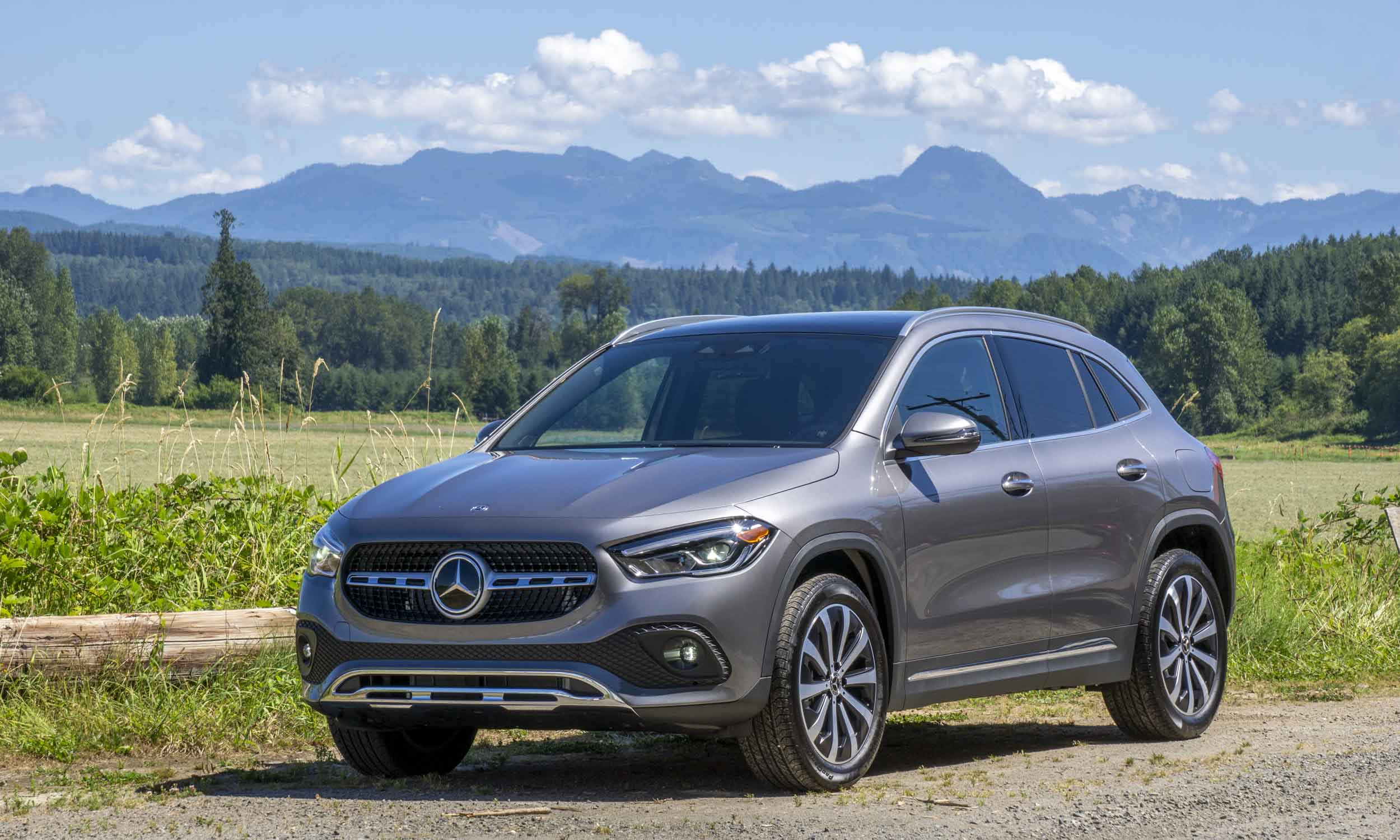