We felt like Goldilocks of Three Bears fame, when we first encountered the 2015 BMW 2 Series cars. While many cars are too small or too large for our taste, the 2 Series was just the right size for our lifestyle. And for Barbara who covets most things ?convertible? the 228i Convertible was just about the perfect size. 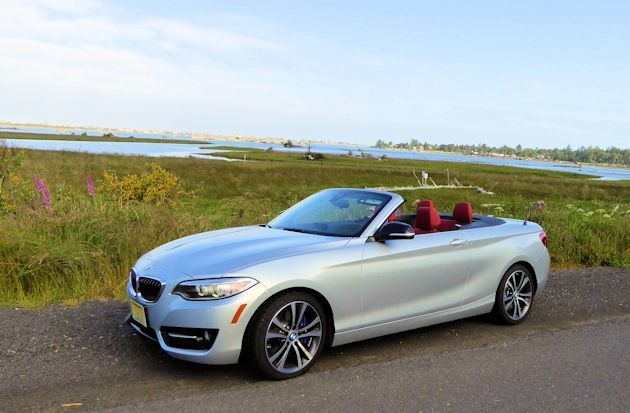 The BMW 228i Convertible blends BMWs trademark performance and handling with crisp styling and passenger comfort and convenience. 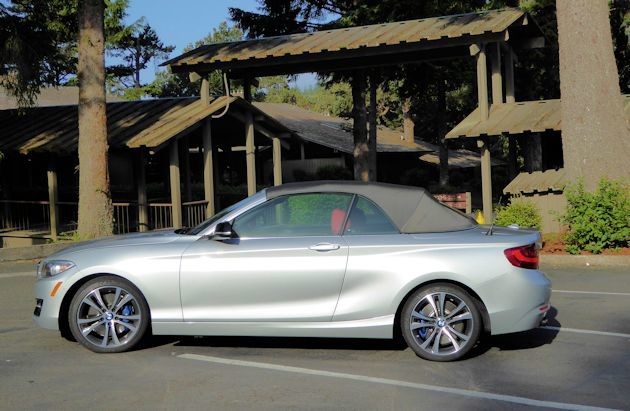 We felt this was a car for people like us, who seldom carry other passengers, but like the idea of being able to carry a couple more on occasion. However, the best part about that extra seating is it provides more space for ?things? we like to have easy access to. These are features that give the 2 Series convertible a big advantage over the typical two-seat sports car. Another plus is the extra seat takes it out of the sports car insurance classification, which means lower insurance rates. Cargo space is a spacious 13.8 cubic feet and can actually hold two sets of golf clubs. 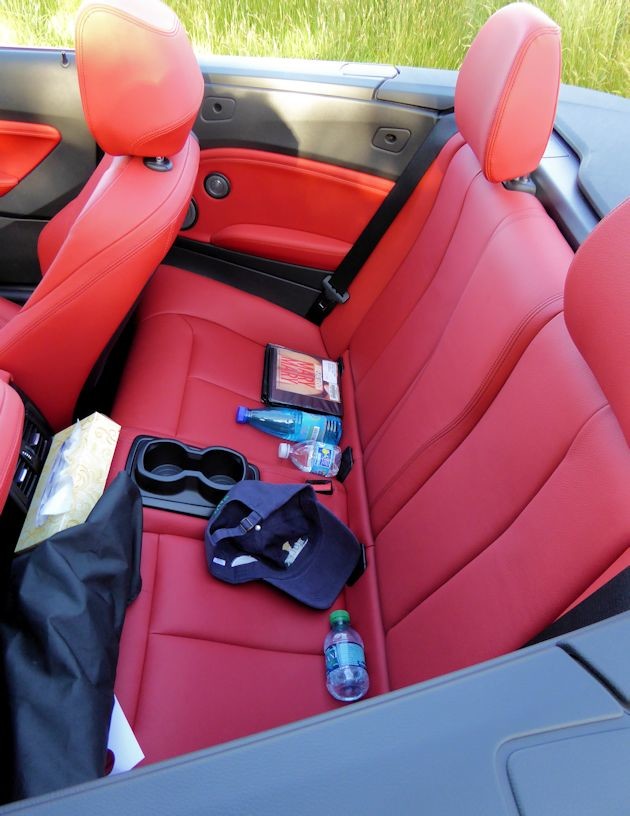 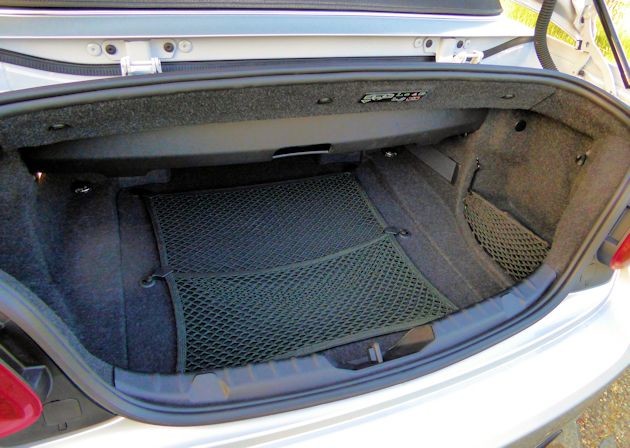 When the top is up, the interior is quiet like a coupe. When the top is down the interior is surprisingly well protected against the wind. Top up or down the car displays a remarkably solid feel with no hint of body twist or vibration. With the standard wind deflector in place over the rear seat it?s possible to listen to the audio system and carry on an almost normal conversation at highway speeds with practically no wind intrusion into the seating area. 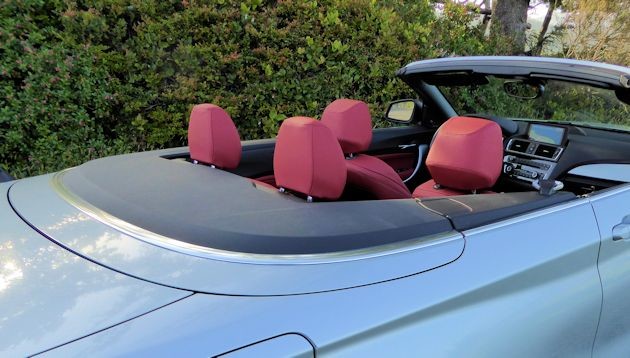 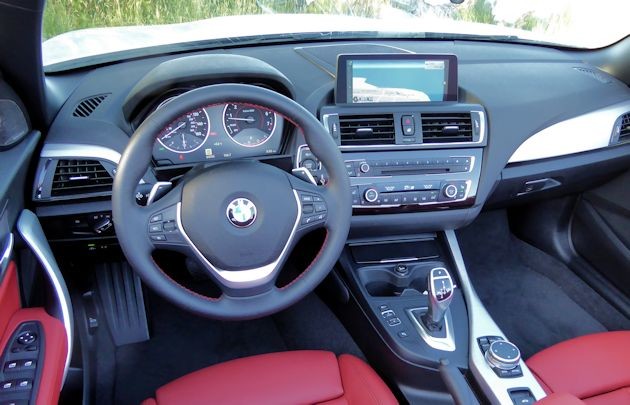 The interior has a strong driver-orientation with large well organized, high quality controls. Like in all BMWs the controls have a solid precise feel. The BMW iDrive controller has always been a frustration for us, but either we are getting used to it or the engineers have tweaked the interface enough over the years to make it feel more comfortable to use. The interior has abundant storage spaces in the doors and the center console to put things for easy access. The wide high-resolution screen mounted high on the center stack makes navigation, audio and other vehicle information easy to get to. 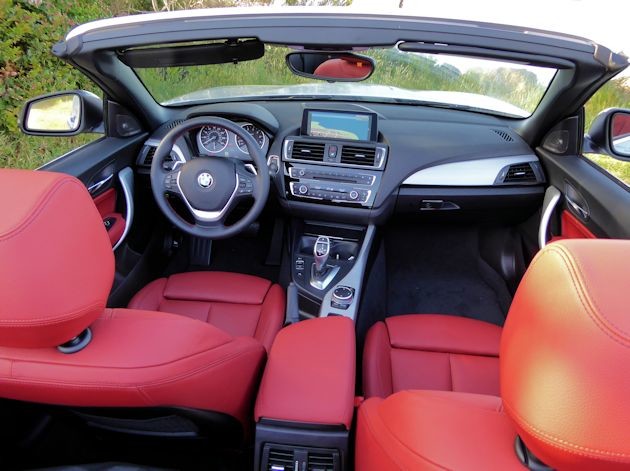 The navigation system includes a Proactive Driving Assistant function, which notifies the driver when to lift off the throttle ahead of corners, turn-offs, roundabouts and speed limits to help improve fuel economy. Included with the BMW?EfficientDynamics technology is a Brake Energy Regeneration system which helps power auxiliary units like the Electric Power Steering, Optimum Gearshift Indicator (manual transmission) and the Auto Start Stop function.

BMW?s ConnectedDrive offers a suite of comfort, safety and infotainment services. It also includes an automatic and free over-the-air updating of the navigation data via the embedded SIM card. The service is included as part of the optional Technology Package, which gives customers access to remote functions like the BMW portal and Advanced Real-Time Traffic Information. It also has Assist eCall with an Enhanced Automatic Collision Notification function and BMW TeleServices to provide added safety. 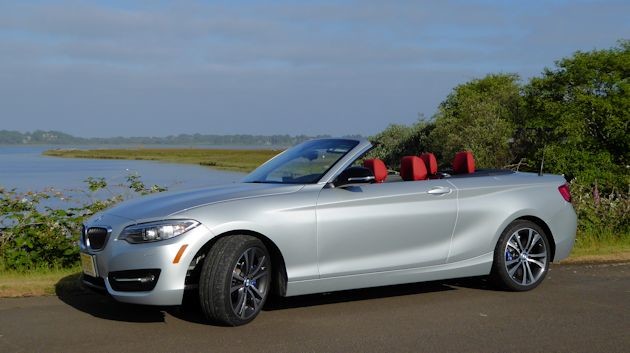 The 2 Series Convertible is available in two engine-based models. We drove the 228i which is powered a 240-hp four-cylinder engine with twin-scroll turbocharger, High Precision Direct Injection and a sophisticated variable valve timing. The engine drives the rear wheels through BMWs excellent eight-speed automatic transmission ? it is not offered with a manual transmission, however the M235i is available with the a six-speed manual.

BMW?s all-wheel drive (xDrive) is an available ($1,800) option with the 228i. The xDrive is unique among AWD systems because it delivers power to all four wheels most of the time with a 70 percent rear/ 30 percent front torque split that adapts seamlessly as traction needs change. This helps give the car significantly better traction in all types of conditions. 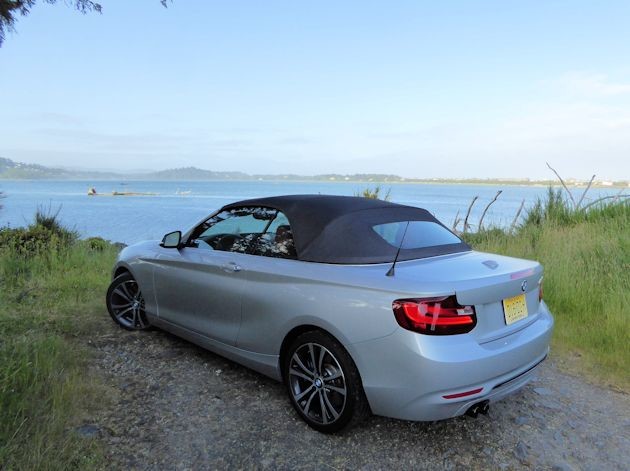 The transmission can be shifted manually from the steering-wheel mounted shift paddles. This doesn?t feel like most of the four-cylinder engines we drive, it?s extremely quick, making a 0 to 60 mph sprint in only 5.7 seconds (or 5.6 seconds for the xDrive). It also has a Launch Control function which produces maximum traction and vehicle dynamics during hard acceleration. The EPA rates the 228 fuel economy at 23 mpg city, 34 mpg highway and 27 mpg combined. On a drive to the Oregon coast we averaged 27.9 mpg.

The 2 Series is also available in the rear-wheel drive 235i model powered by a 320-hp TwinPower Turbocharged inline-six cylinder engine. It has the same injection and advanced valve systems as the four-cylinder along with M Performance model cooling, engine management and engine sound tuning systems. This rear drive car makes a 0 to 60 run in 4.8 seconds. EPA fuel economy is estimated to be 21/32/25-mpg. The top speed on all models is limited to 130 mph. 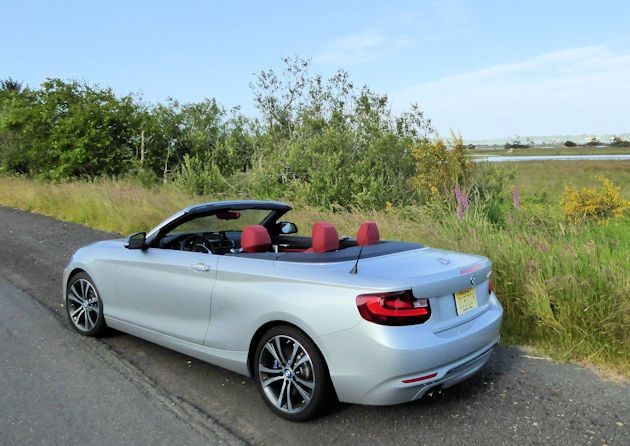 The 2015 BMW 235i certainly lives up to the company?s motto of producing the Ultimate Driving Machines. The handling and performance is outstanding while maintaining a civilized ride quality. We enjoyed the Convertible top up and top down for its refined characteristics and high quality execution. 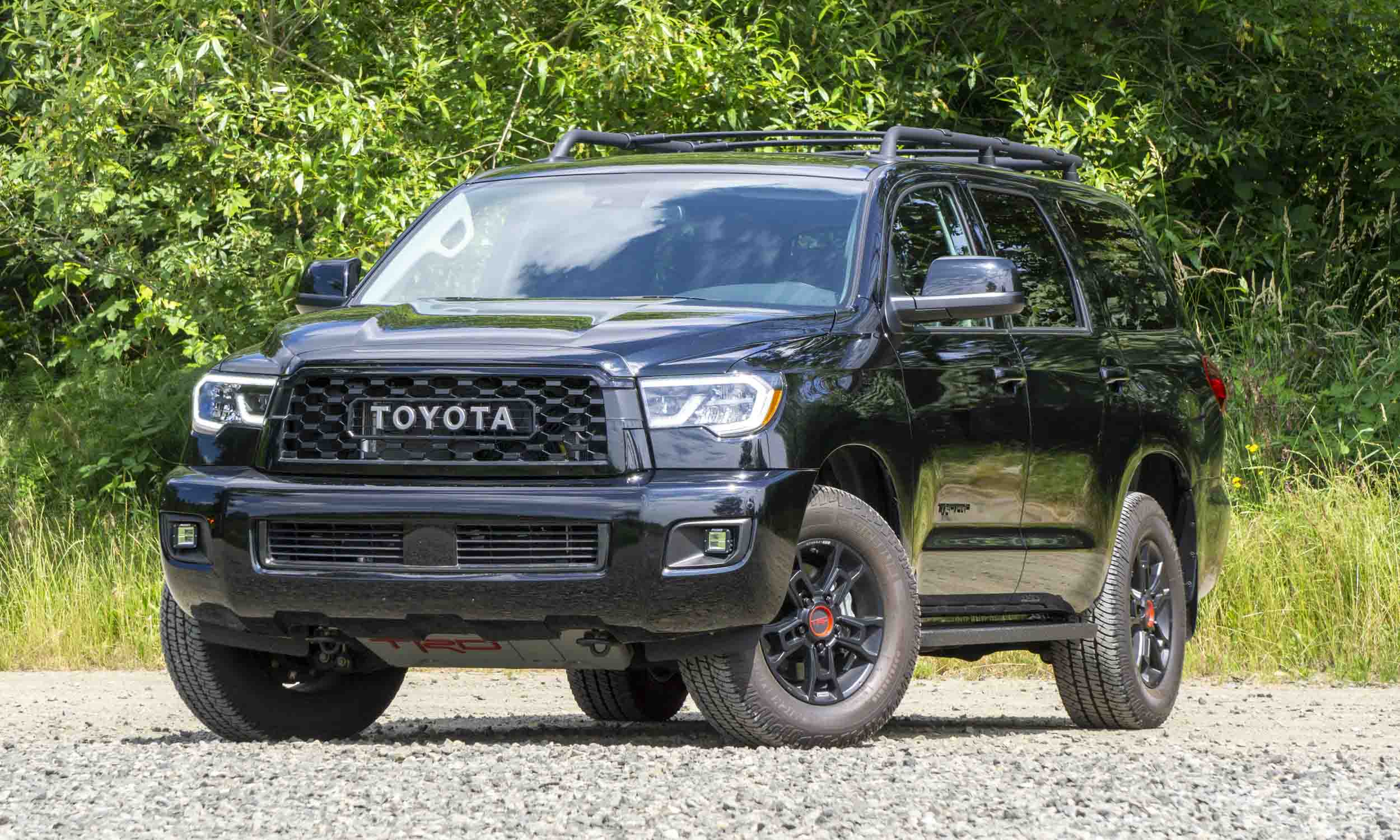 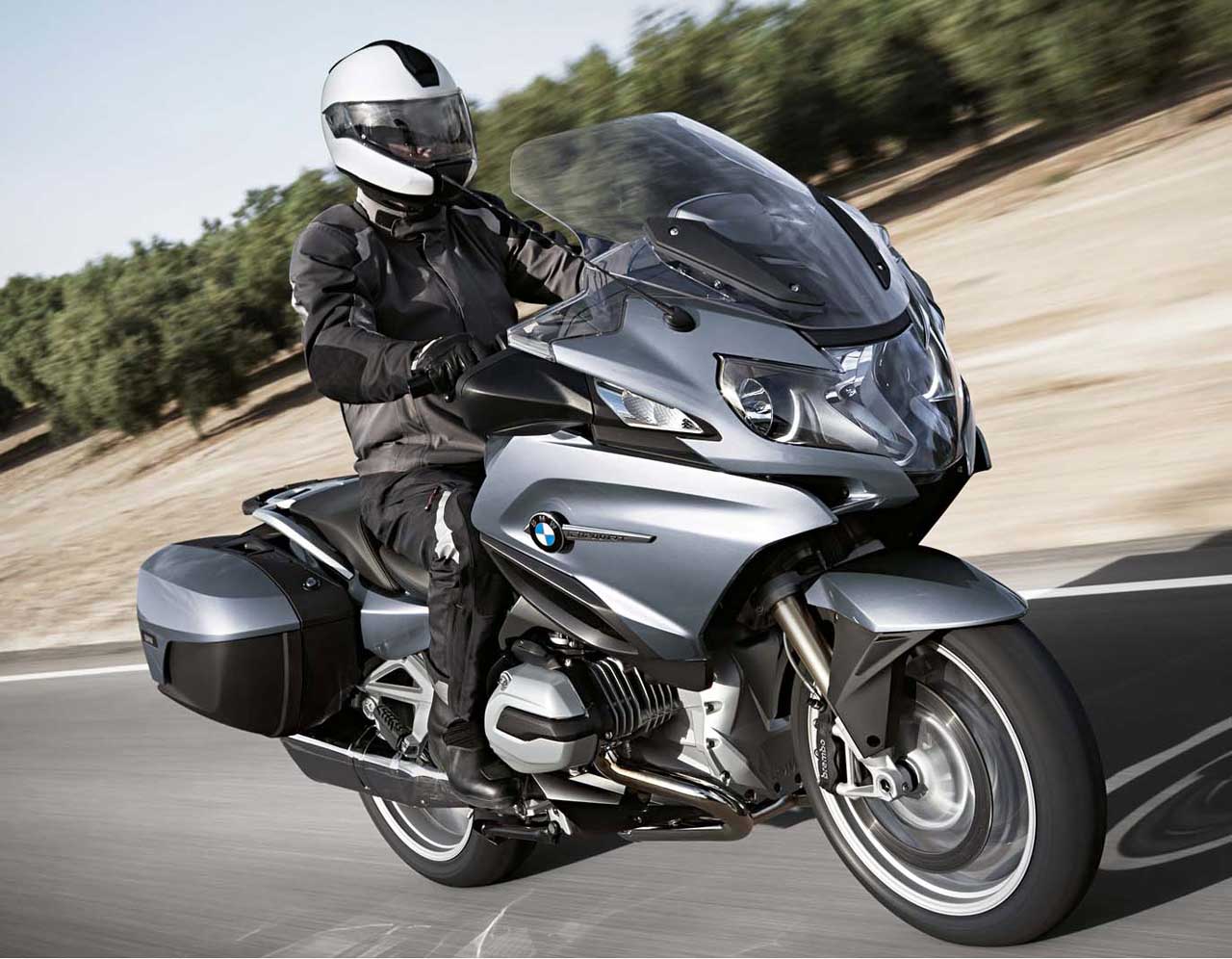