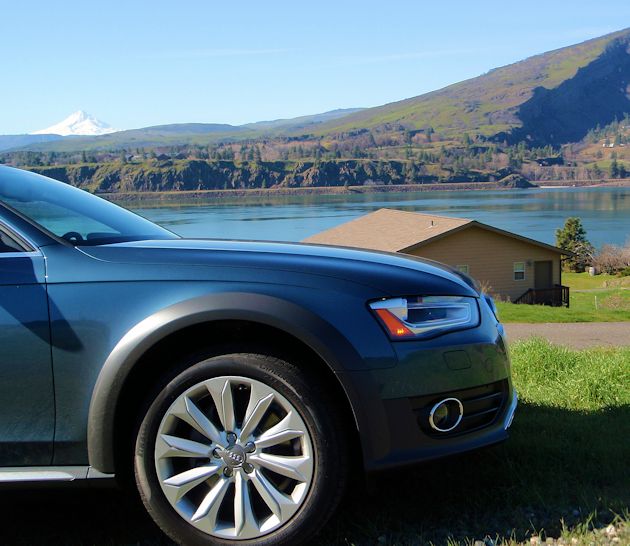 When we get an Audi test vehicle there seems to be a little voice that says to us ?road trip?, so when the 2015 Audi allroad (that?s how Audi spells it, with a lower case ?a?) was added to our test schedule we booked a few nights at our timeshare condo at Lake Chelan. March is not necessarily the tourist season at the 50 mile long lake in north central Washington State but we?re not into lake sports, we simply hadn?t been there and like to explore to new places.

Our WorldMark timeshare allows us to pick and choose nights in available units in about 100 resorts in North America, Australia and New Zealand. We find it?s a great way to get to know a new area. 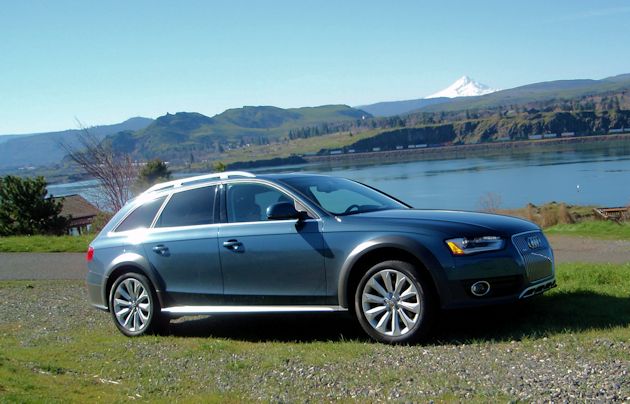 The allroad is basically an Avant (wagon) version of the Audi A4 sedan that has some extra cladding in the form of wider wheel well trim in a contrasting color plus it sits a little higher (7.1 inches) for better ground clearance, should the owner decide to actually go off the beaten track. Those extra little touches give it a more masculine look and a slightly higher seating position without actually going to one of the Audi ?Q? SUVs. For those of us getting older, or simply more into convenience, the allroad?s higher seating position is ?just right? for sliding into the seat without climbing up into (as is often the case in an SUV), or lowering yourself into the seat of a sports car or low slung sedan. 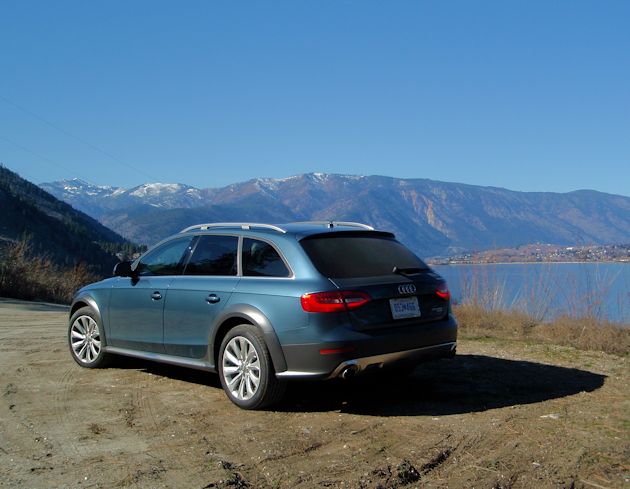 The allroad is equipped with Audi?s 220-hp, 2.0-liter TFSI? four-cylinder turbocharged engine, with eight-speed Tiptronic automatic transmission and quattro? (another name Audi doesn?t capitalize) all-wheel drive system. As we say nearly every time we drive an Audi four-cylinder turbocharged engine, ?it seems more powerful than the numbers indicate.? For example, this little engine drives the 3,891 pound allroad from 0 to 60 mph in only 6.4 seconds ? that?s impressive. The fuel economy is rated at 21 mpg city, 28 mpg highway and 24 mpg combined. We averaged 26.3 mpg on our little 700-mile junket. 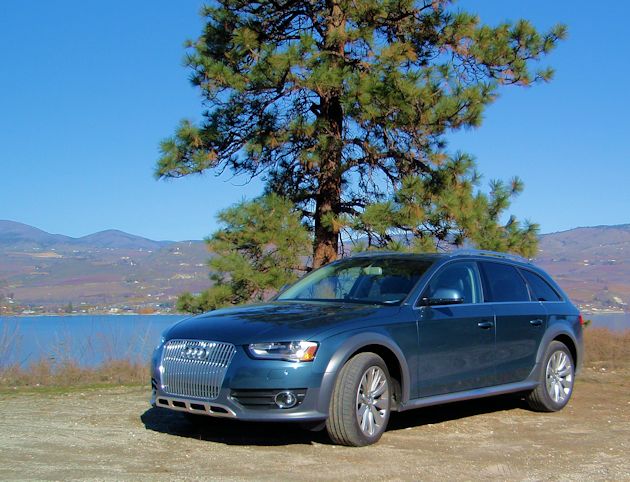 Most of the roads on our route were two lane and required an occasional pass around a slow moving car or truck, and that?s where the turbocharged four-cylinder engine really shines as the car accelerates toward three-digit territory by the end of a long pass. We like the eight-speed automatic Tiptronic transmission, which shifts quickly and smoothly to provide better driver control and engine braking in some of the more curvy sections ? steering wheel mounted paddle shifters would be a nice addition however.

Like most of the other Audis, the allroad has all the major controls grouped around the transmission shifter on the center console within easy reach and in positions that don?t require the driver to look down to operate. 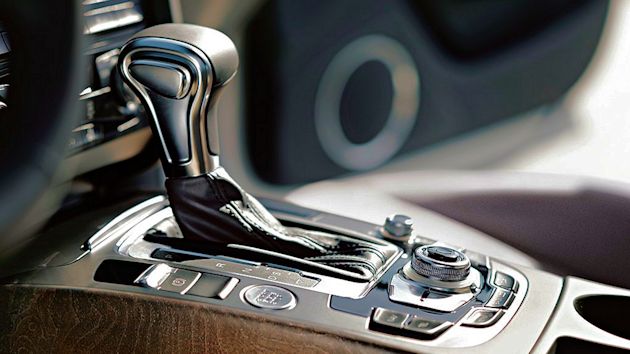 We like the more personal size of the allroad, too. It?s comfortable for two people and all their ?stuff? without feeling massive, but it can carry five adults if needed. Cargo space is 27.6 cubic feet behind the rear seat back, and it expands to 50.5 cubic feet when the rear seat backs are folded.

Like all Audi?s, the allroad styling scheme is simple elegance by design, functionally and comfort, which is maybe why we like Audis so much for road trips. Our Premium Plus trim level allroad had an extensive list of standard comfort and convenience features from panoramic sunroof and power tailgate to leather seating and Xenon headlights. The Technology Package added MMI? Navigation, parking aids including the rearview camera and the very important (to us) Audi side assist which warns the driver of other vehicles in the blind spots. A second option package included the Premium Plus ($2,100) which adds features like auto dimming mirrors (heated on the outside), heated front seats (which are on Barbara?s must have list) and the advance key system. 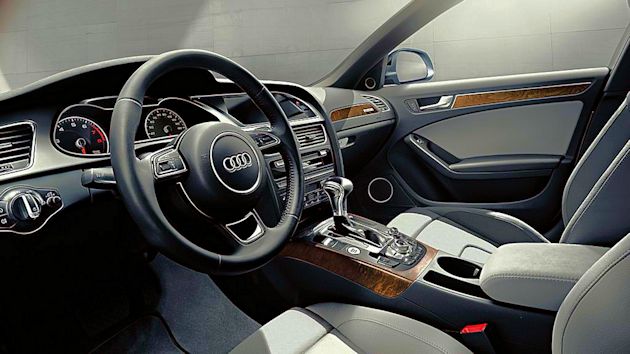 Cars ordered with the MMI? include Audi connect? which allows up to eight devices to connect to the Internet through an in-vehicle Wi-Fi system. The system also enhances the navigation system with Google Earth? maps that show a real aerial view along the route. The system also connects to real-time localized weather, news, live fuel prices and information on travel destinations, restaurants and lodging — all handy for a road trip. New car owners get the service free for six months and then it costs $15 a month for a subscription. 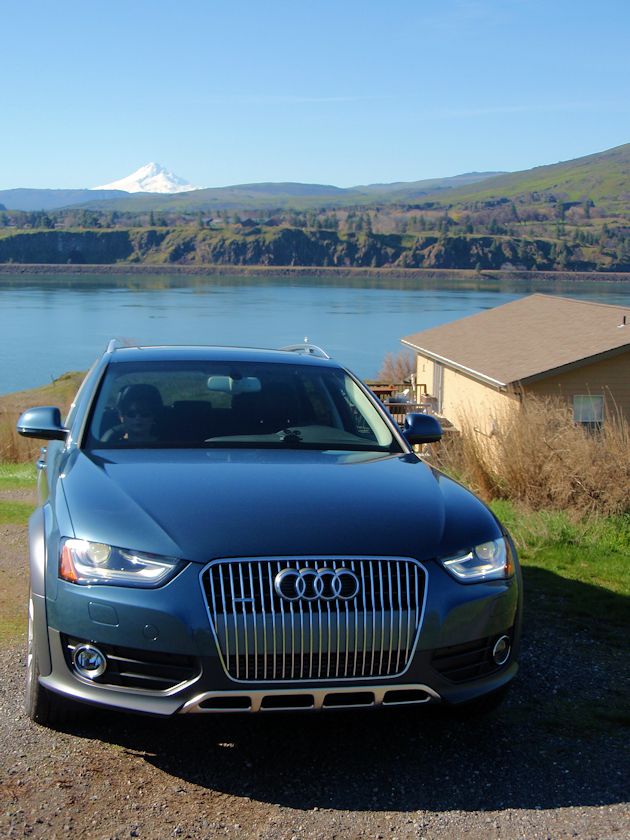 Our route to Lake Chelan took us up Washington?s Highway 14 through the scenic Columbia River Gorge, past Mount Hood and then we turned north on Hwy. 97 through the Yakima Valley which is famous for its apples, hops, sweet cherries, mint and grapes. Any trip through the area, for us, has to include a stop at Miner?s Drive-In for one of their Giant Miner burgers and a massive pile of french fries. Miner?s has great food and gigantic crowds; there were probably 150 to 200 people in the dining room the Sunday afternoon when we stopped. However, service is fast especially for cooked to order burgers and they bring it to your table. We counted more than 20 people behind the counter preparing all the food, milkshakes other items from the large menu. It?s certainly worth the short detour off Interstate 82 into Yakima. 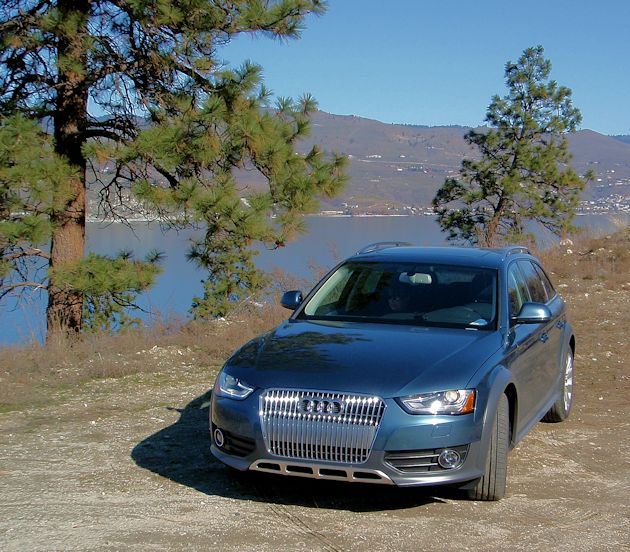 One of the advantages of the allroad over more conventional SUVs and many crossovers is the more car-like stance and handling characteristics. The ride and handling are calibrated more toward comfort than racing down country roads, and that?s just as it should be. However, the Audi allroad is well-balanced with no skimping on spirited driving abilities ? after all it is an Audi.

The 2015 Audi allroad is available in three trim levels: Premium, Premium Plus and Prestige with starting prices listed at $43,325; $45,425 and $50,727 respectively and including the $925 destination charge. Our test car was the Premium Plus and with the two option packages totaled $48,875.

If we were buying one we?d opt for the Prestige so we could spec the $3,000 Driver Assist Package which adds adaptive cruise control, Audi drive select and Dynamic steering. We like the way adaptive cruise allows you to stay a safe distance behind the vehicle in front without having to manually change cruise control, or to brake. The Audi Drive Select system allows the driver to selects ‘comfort’, ‘auto’ or ‘dynamic’ to change set throttle response, transmission, steering and shock absorbers to suit the driver?s driving style and to the road conditions.

We like the Audi allroad — it?s a comfortable size, gets good fuel economy, is fun to drive and has the space to carry lots of stuff when you need it to. 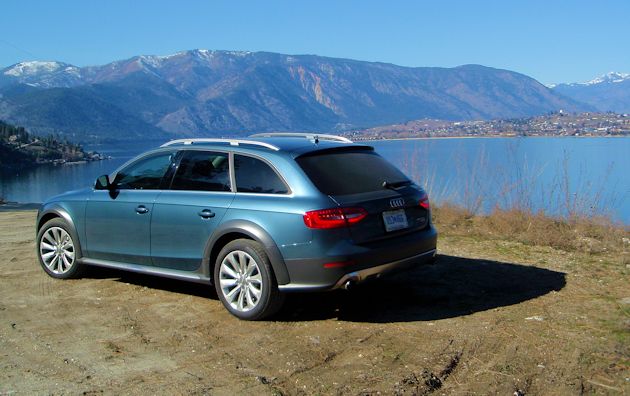 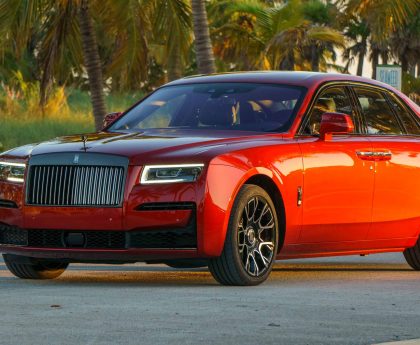