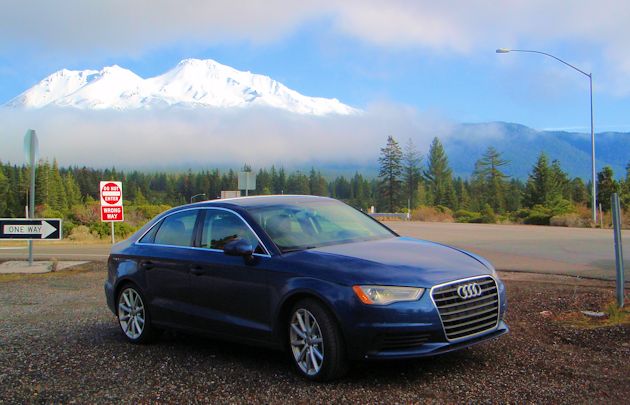 Washington to California ? Surveying the press cars to see what might be available for a December road trip; we discovered a new diesel version of one of our recent favorites, the 2015 Audi A3 TDI. Our planned trip from the Portland, Oregon area to the Monterey Bay area, about 100 miles south of San Francisco, and back would entail about 1,600 to 1,800 miles in the car so we wanted it be comfortable and economical and the A3 was both. The only thing it didn?t have, was quattro all-wheel drive, it?s not available on the A3 TDI.

Driving over the Siskiyou?s and through the Shasta area in December has often been challenging and dangerous without all-wheel. Our initial plan called for taking our chances and hoping there would be no snow, but we planned an alternate route along the coast on Hwy 101, just in case. We were fortunate, we had no snow either direction so the front-drive Audi A3 was perfect for the drive. The only challenge was black ice near Weed, California on the way home. We were driving cautiously, but the Mitsubishi pickup that passed us 20 minutes earlier didn?t fare as well — he was resting upside down against the center divider with rescuers at hand, when we passed by. 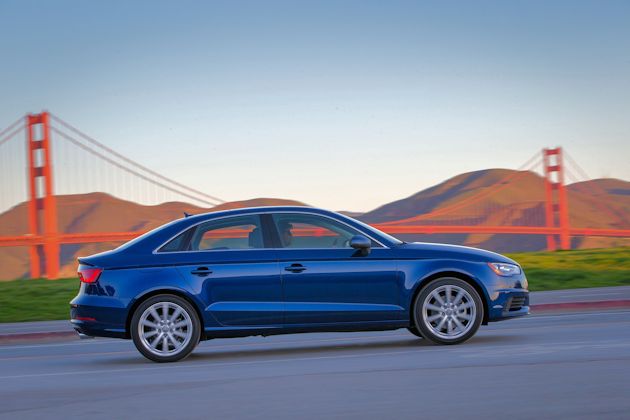 Most of this drive is Interstate highways and the Audi eats up the miles, so the 733 miles took us about 12 hours including one fuel stop, several potty breaks, a fast food breakfast sandwich stop and the obligatory stop at the first In and Out Drive-In going into California, which happens to be in Redding. It wasn?t exactly a culinary tour or something our doctor would approve of, but it was efficient and yummy. We also stopped at the Olive Pit in Corning, Calif., to pick up some miscellaneous olive items. After we arrived at our destination we did have a chance to sample some of our local favorites. 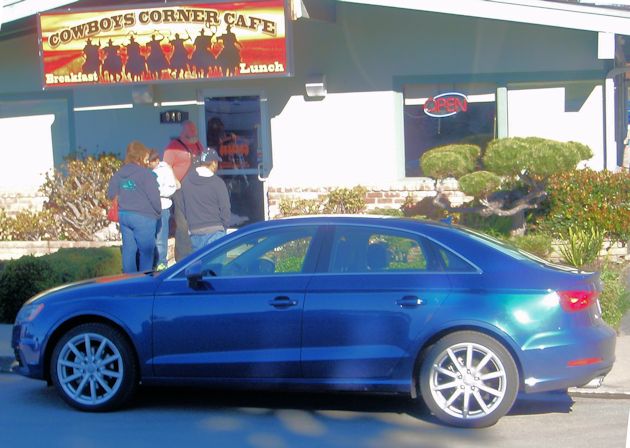 Audio books have become an important part of our road trips. We get them from our local library and they make the travel time fly by, and sometimes we even resist stopping because the plot is too exciting. This was a three book trip; we finished the third on a short drive after returning home. We seem to have an aversion to listening to them at home; they seem to require a car. 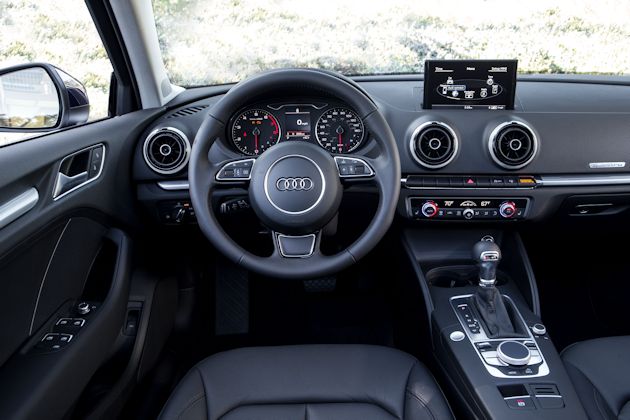 The all-new 2015?Audi A3?Sedan comes in three flavors, actually four, if you count the S4 performance version. The model designations are represented by the engines; the four-cylinder gasoline models are the 1.8T and the 2.0T. As you might guess from the ?T?, both engines are turbocharged. The 1.8T is a new 1.8-liter engine which produces 170-hp and drives the front wheels. The 2.0T, which includes quattro, is the latest variation of the hard-working turbocharged 2.0-liter four-cylinder engine that has been used extensively in the Audi lineup for years. The new version is a 220 horsepower and like previous engines versions we?ve driven, they seem to be very powerful horses. 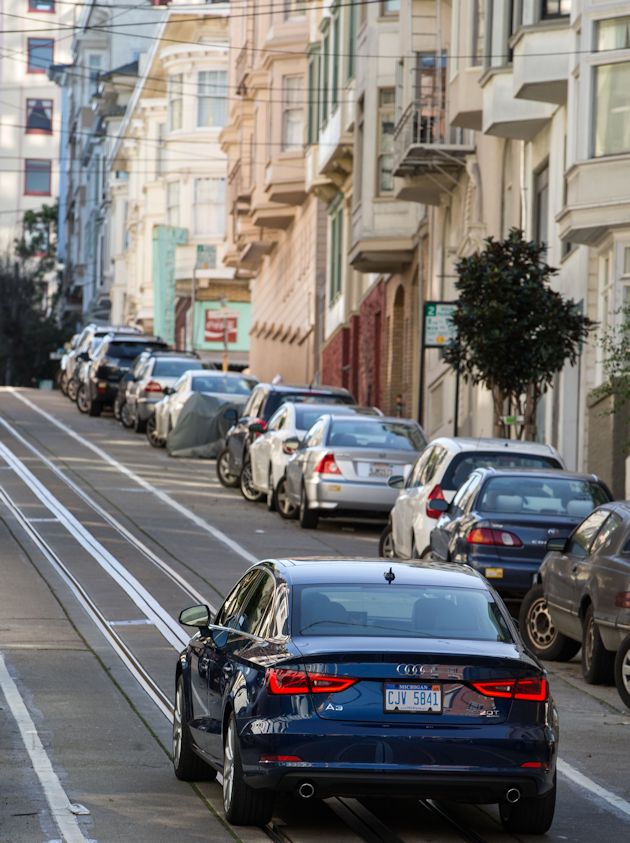 The third version is the new TDI clean diesel we drove on our road trip. It is a 150-hp 2.0-liter four cylinder Turbocharged Direct Injection engine, hence the name TDI. All three engines are attached to Audi?s fast and smooth shifting six-speed S tronic? dual-clutch automatic transmission. The transmission linkage has a gated area that allows the driver to manually shift the transmission.

Audi lists the TDI 0 to 60 mph acceleration time at 8.1 seconds, but as with all diesels, it feels quicker probably due to the linear acceleration characteristics of the diesel engine and the high torque. EPA fuel economy is listed at 31 mpg city, 43 mpg highway and 36 mpg combined. By the trip computer and at the pump calculations we averaged 45 mpg driving about 5 to 7 mph faster than the speed limits, which were generally 65 and 70 mph. 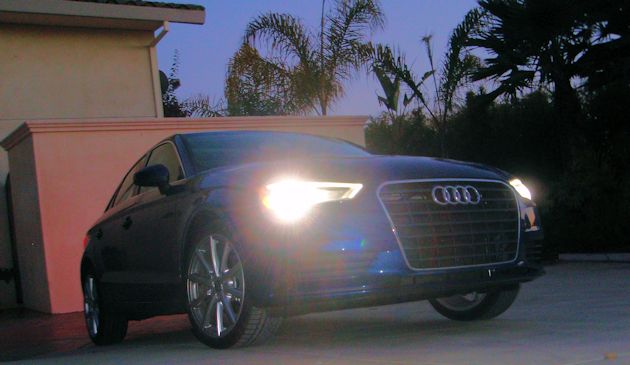 The Audi S3 performance version also uses a 2.0-liter four-cylinder turbocharged gasoline engine, but it?s highly modified and nets 292-hp and 280-lb.ft. of torque. It makes the 0 to 60 mph run in just 4.7 seconds, which is just over a second faster than the 2.0T.

The A3 sedan suspension is a bit on the soft side, but it produces a very comfortable ride and we think is appropriate for this model. Someone wanting to push handling limits should probably think about stepping up to the performance-oriented S3. The A3 feels very controlled, well balanced both on the freeway and on the tight corners we drove then going over Hecker pass between Gilroy and Watsonville. This twisty steep pass is one of our favorite test routes when were in central California. The electromechanical steering goes where it?s pointed and we especially liked the tight 36.1 feet turning radius. 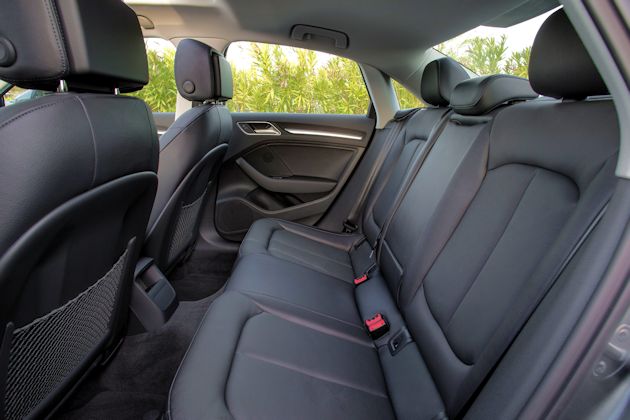 With the smaller size comes a little less interior room, but rear seat space is reasonable for most passengers. At 10.1 cubic feet of cargo space, the Audi A3 has to carefully packed for a week?s trip and in this case, included Christmas gifts. You can?t just throw the bags in the back, or they won?t all fit. 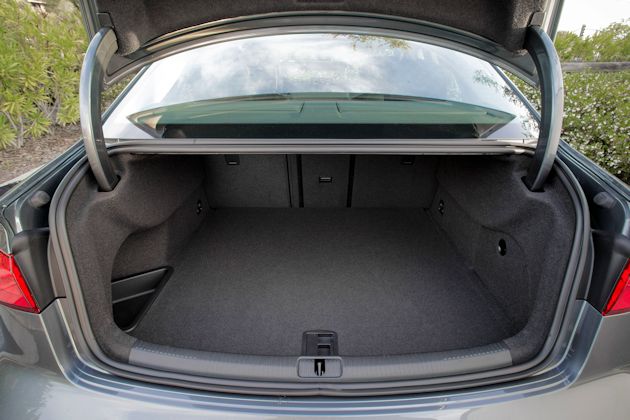 All three A3 models are offered in three trim packages (Premium, Premium Plus and Prestige) allowing shoppers to select a level of equipment fitting their needs and budget.
All three trim levels include features like leather seating, panoramic sunroof, bi-Xenon headlights, HD and satellite radio, Bluetooth?, Rain/light sensor for wipers and headlights. The top level Prestige model adds LED headlights and taillights, S-Line? trim, heated seats, Bang & Olufsen? audio and the MMI navigation system. The navigation system uses a screen as thin as a smart-phone; it rises out of the center of the dash. It?s a perfect position and allows drivers to keep their eyes on the road while just glancing sideways to see the screen. Controls are quite user-friendly, too. 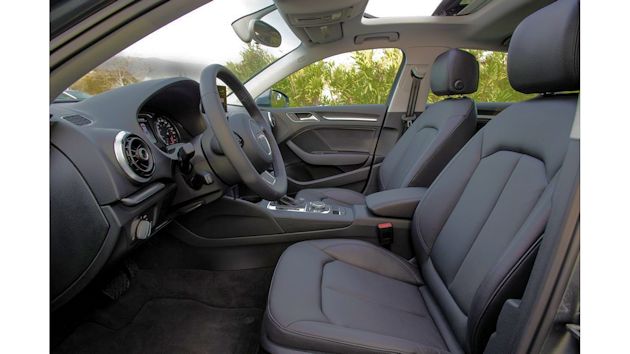 Each trim level has a handful of options available, but the Prestige has the most interesting packages. We especially like the Advanced Technology Package ($1,400) which adds Audi Pre sense? front (a crash avoidance system) Audi Active Lane Assist and Adaptive Cruise control. One other interesting feature in the option packages is the Audi Drive Select system which allows the driver to adjust throttle response, shift points, and the electromechanical steering effort by selecting one of four settings: Auto, Dynamic, Comfort and Individual.

Hoping to have an even stronger appeal for younger technological savvy shoppers, Audi has equipped the A3 with what it expected to be the first-ever in-vehicle 4G LTE data link. This will give the system faster connections and the ability to show state-of-the-art graphics for applications like Google Earth Maps?. They expect online connections to be as fast as a home computer. The system will work in connection with AT&T cell service and will allow for a wider range of services and entertainment than any other manufactures currently offer. 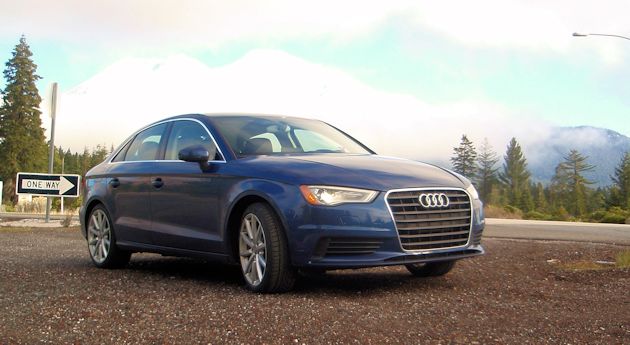 Our road trip car included optional metallic paint ($550), MMI Navigation plus package ($2,600) and the A3 Premium Plus model package ($2,550) for a total price of $39,195. If we were ordering an A3, we?d be sure to include the Driver Assist Package ($1,400) which adds side assist (blind spot), a rear view camera and parking assist along with the ($1,400 technology package that adds the active cruise control).

Overall, we thought the A3 was a great road trip car because of its comfortable seats and ride and especially because of the outstanding fuel economy. 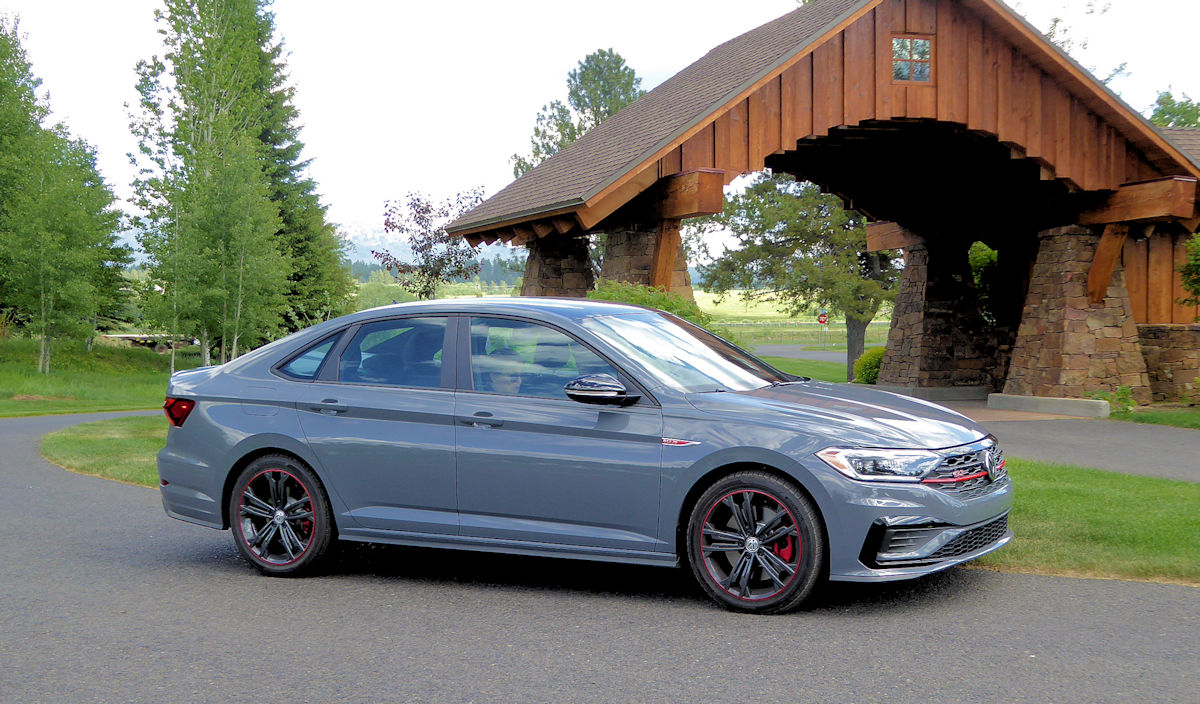 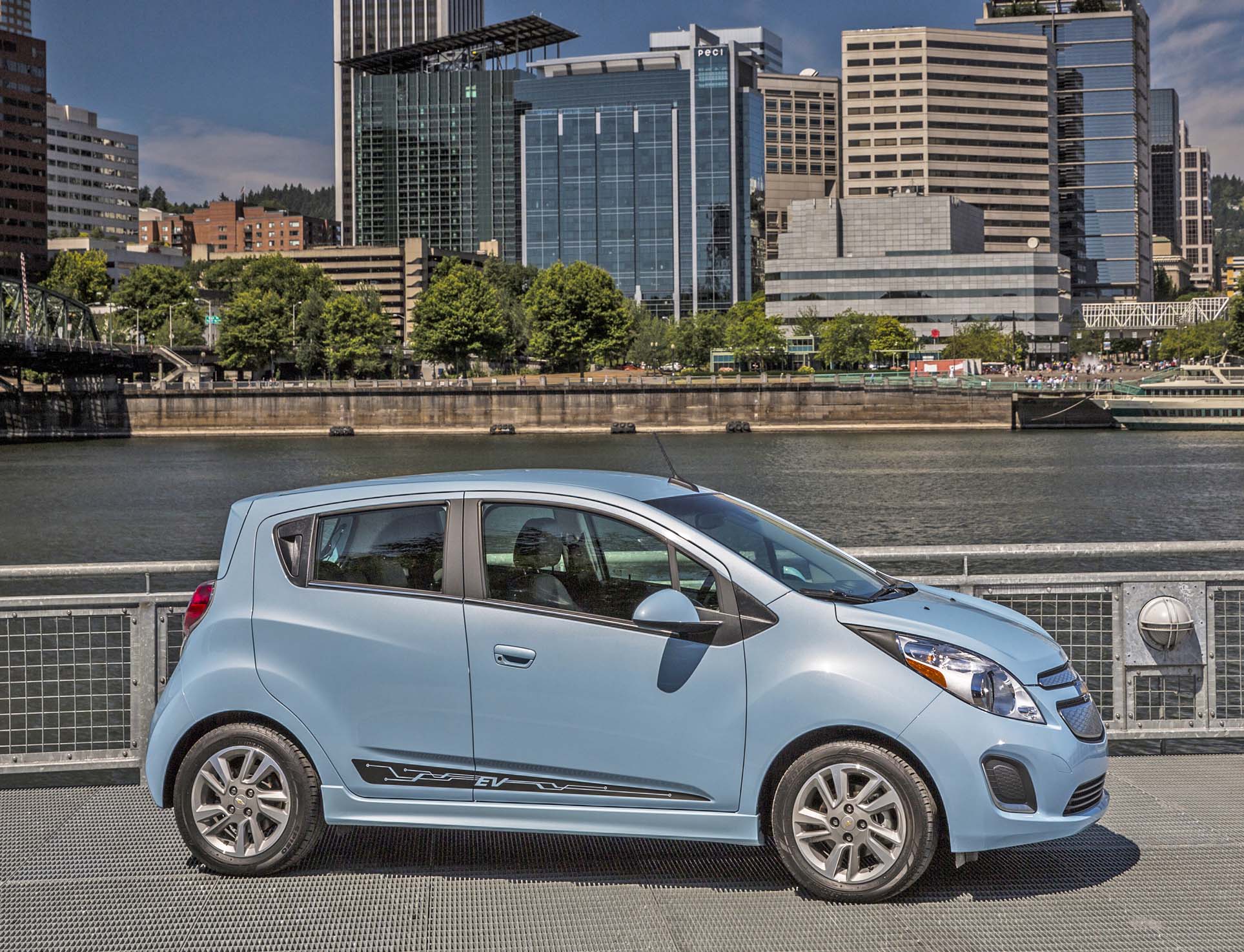