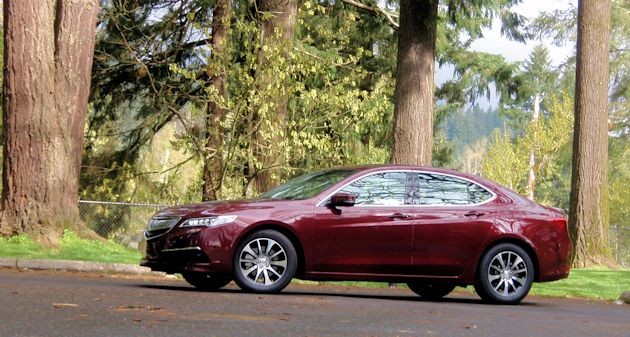 It?s nice to know that some things don?t change too much even when they are totally new.

The 2015 Acura TLX is a great example of just such a product. It?s completely new in a slightly smaller size, with new design, new transmissions and even a new name, yet it?s the same high quality, comfortable and well-designed mid-size sedan we?ve come to know and love over the years. 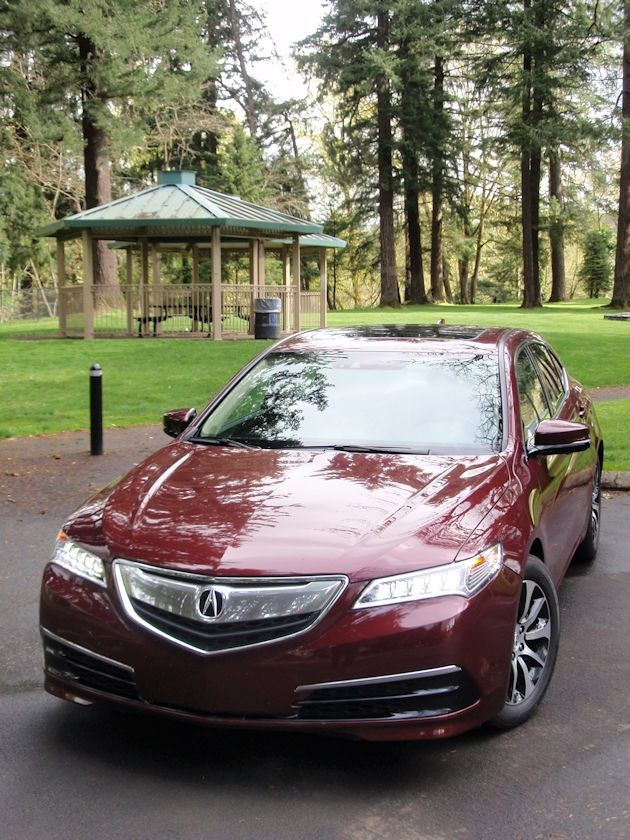 The TLX actually replaces two cars, the TL and the smaller TSX. The goal was to have a car that better fit the gap between the smaller ILX and the flagship RDX. The tape measure shows the TLX is about four-inches shorter and one-inch narrower than the old TL, but the wheelbase is the same. It is also nearly five-inches longer and one-inch wider than the TSX. So, it is about the same size as targeted luxury competitors like the BMW 3 Series, Mercedes C-Class, Audi A4 and Lexus IS.

The Acura signature Jewel Eye? LED headlights, which first appeared on the latest Acura MDX, are a design focal point with a unique look, but they also provide a long, bright look down the road at night. The entire front fascia has a clean new aerodynamic treatment with smaller grille area topped by Acura?s signature metallic ?wing?. The sides have interesting new character lines that give the car the look of forward motion. The rear end has a short deck, large wrap-around taillights with a long three-dimensional LED pipe light and a clean horizontal look that makes the car look wider. 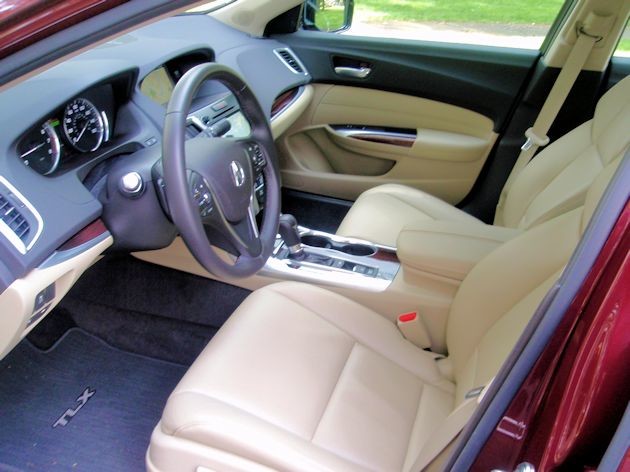 The TLX interior is filled with luxurious appointments, soft touch surfaces, supportive seats and well thought-out controls. To make the occupants stay even more cozy and safe, it?s loaded with the latest technologies and an audiophile-quality entertainment system.
The center stack has a simple control system for inter-vehicle functions. It uses a two screen system with an upper eight-inch screen to provide data for the Navigation system, features like AcuraLink Real-Time Traffic and the backup camera. The screen is controlled by a large knob mounted just below the lower touch screen. The lower seven-inch touch screen is used to control the climate, audio and other vehicle functions. 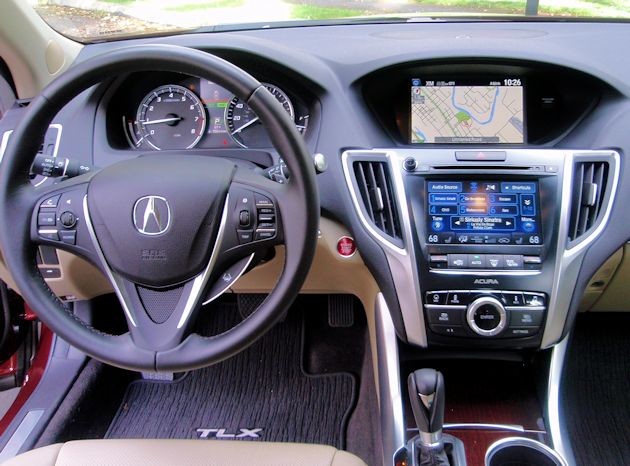 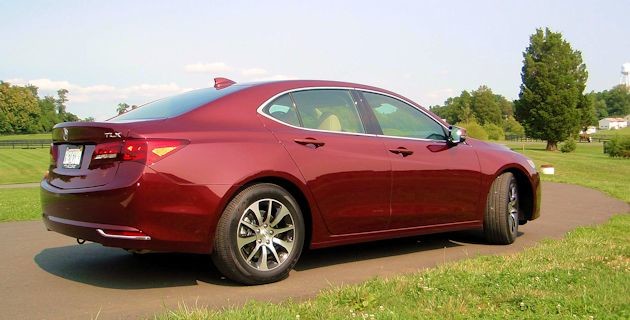 Our test car had the 2.4-liter DOHC i-VTEC with direct injection producing 206 horsepower and 182 lb.-ft. of torque. On paper the naturally aspirated four-cylinder engine doesn?t excite, but on the road, it is a ?gem? with strong acceleration and a smooth, spirited character. Teamed with the world?s first eight-speed double clutch automatic transmission with a torque converter it seemed to have the perfect gear ratios to provide a combination of performance and excellent fuel economy ? 24 mpg city, 35 mpg highway and 28 mpg combined. We averaged 29.4 mpg during the week we drove the TLX. The shifts are quick, smooth and positive, and we appreciated the standard steering wheel mounted shift paddles. Buff magazines list a 0 to 60 mph acceleration time of 6.8 seconds. 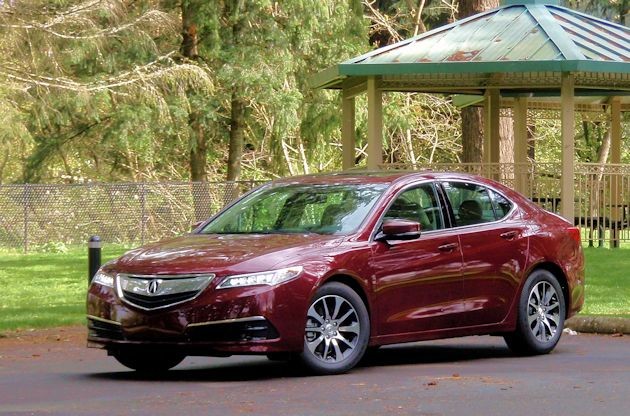 A 3.5-liter direct injection SOHC V-6 engine powers the two upper level Acura TLX models. The engine has a Variable Cylinder Management System which deactivates three cylinders during light load driving and it has an idle stop system that shuts the engine off at stop lights and other pauses. The 24-valve engine produces 290 horsepower and is mated with the new Acura nine-speed automatic transmission. The extra gear ratios allowed the engineers to tune the drive train for better acceleration using lower ratios in the bottom of the range and higher ratios for better fuel economy in the top of the range. The result is a significant improvement in fuel economy to 21/34/25 mpg for the front drive and 21/31/25 mpg for the SH-AWD. The FWD V-6 model will accelerate to 60 mph in 5.7 seconds. 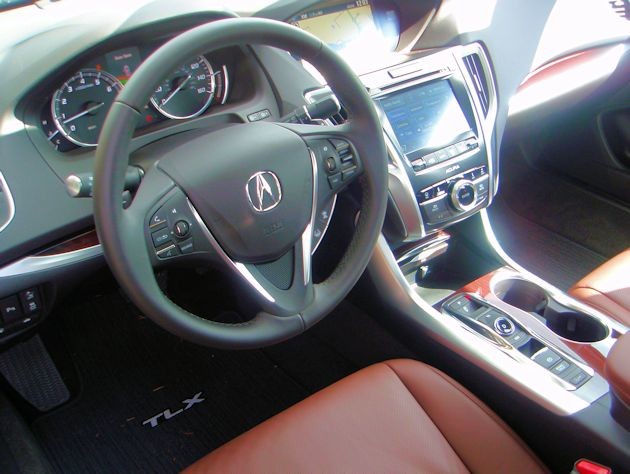 The traditional shifter on V-6 models is replaced by the advanced Electronic Gear Selector. It uses an instinctive push-button system to make the initial drive commands P-R-N-D and the steering wheel mounted paddle shifters to manually shift. The console also houses an electronic parking brake with an Automatic Brake Hold button which retains brake pressure when the vehicle is stopped ? this gives the driver better control on hills and in heavy stop-and-go traffic. 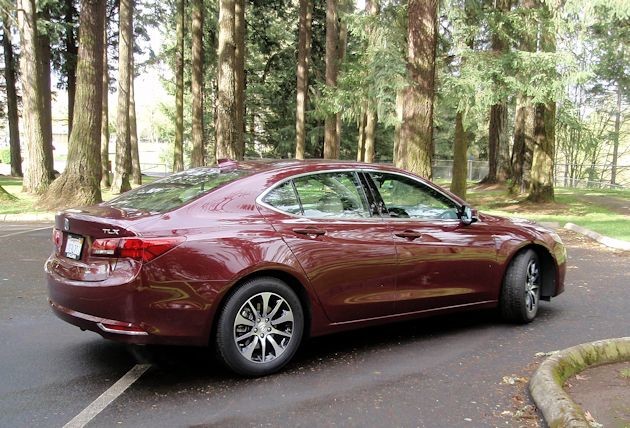 All TLX models have very good handling characteristics. The front drive models are equipped with Precision All-Wheel Steering (P-AWS) which improves handling agility. For example, in a parking lot by turning the rear wheels the opposite direction and at higher speeds by turning the rear wheels the same direction as the front wheels for better stability. The SH-AWD all-wheel drive system is all new and a much smaller unit than the original. It is also more refined for 2015 and building on the torque vectoring technology Acura pioneered.
Another interesting technology on all models is the Integrated Dynamic System (IDS) which is controlled by a button on the console. Cycling the button through four positions allows the driver to dramatically change the complexion of the cars handling and powertrain setting for better economy, or sportier driving.

The Acura TLX is available in three models, the 2.4L, 3.5L and 3.5L SH-AWD. Each model is also available with the Tech Package which adds Navigation with 3D View, Rain Sensing Wipers, ELS premium audio, GPS-Linked Climate Control and Sport Perforated Milano Leather seats in addition to all the features of the AcuraLink and Acura Watch safety enhancements. The V-6 models are also available with an Advance package that adds more convenience and technology features in addition to the tech package. 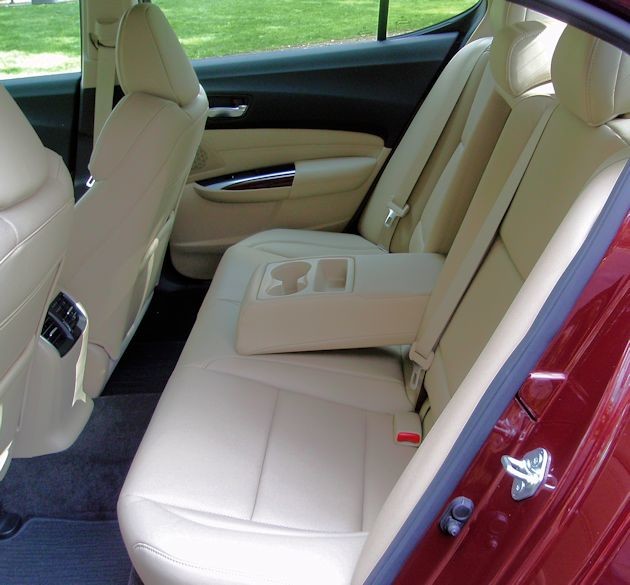 The 2015 Acura TLX 2.4L is priced at $31,890, including the destination charge, ? that makes it one of the best entry luxury vehicle values available. The TLX 3.5L is priced $36,115. The Tech package adds $4,300 to both FWD models. The TLX 3.5L SH-AWD comes with the Tech package and is priced at $42,345 and the Advance Package adds $3,250 making the highest priced TLX $45,595.
The Acura TLX may not have the status of some of its European counterparts, but the performance and handling are on par. Where the TLX pulls into the lead, in our estimation, is its high quality and value. 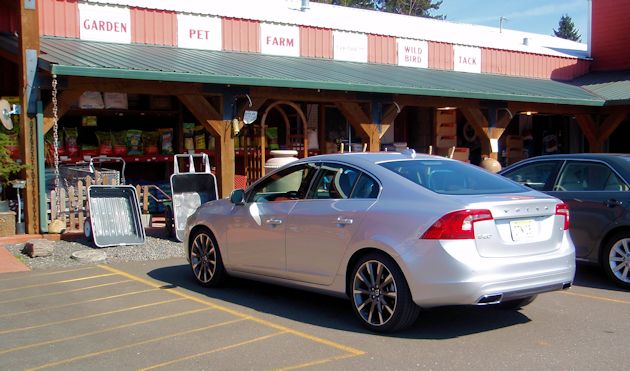