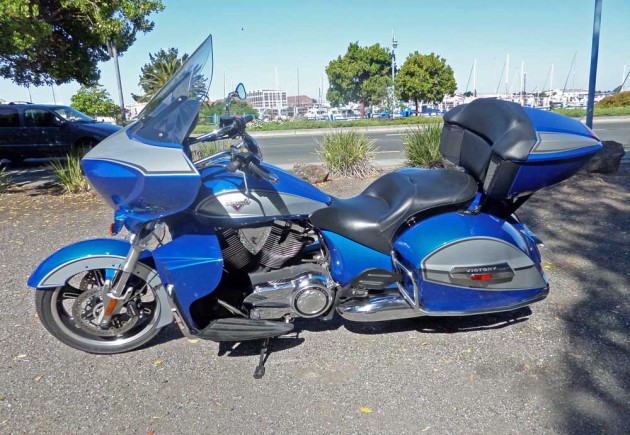 Polaris Industries Victory motorcycle division entered their second decade of ?The New American Motorcycle? in 2008, celebrating their 10th Anniversary with significant improvements to their bike lineup for 2009 in both the cruiser and touring categories, and 2010 saw the addition of two new touring models ? the Victory Cross Roads and Victory Cross Country. The Cross Roads bike served up hard sculpted bags, forward crash bars and a windshield, while the Cross Country cruiser substituted a fork-mounted fairing with a ?shorty? windshield. As with all of Victory?s models, regardless of category, the bikes filled the bill as highly customized turn-key units right off the showroom floor. Now, there?s an even more desirable cruiser for riders who like to rack up their touring miles with more convenience in added comfort. Appropriately, it is the new for 2014 Victory Cross Country Tour ? emphasis on Tour.

Three years ago Victory chose to power all of their bikes with their 106 Freedom V-Twin – 1,731cc (106 ci) 4-stroke 50-degree SOHC, 8-valve Freedom V-Twin, featuring electronic fuel injection, dual 45mm throttle body and split dual exhaust with a crossover. The motor was mated to an improved and enhanced six-speed constant mesh overdrive transmission, capable of cranking out up to 97 horsepower, along with 113 pound feet of torque.

I first rode a Cory Ness custom edition of the 2011 Victory Cross Country, my personal favorite of the Ness clan?s custom offerings for that year. Cory?s bike featured a Cory Ness engine cover, stunning custom paint work with a rich Sunset Red base coat accented by Blue and Black graphics on both fenders, the fairing, tank and hard bags, set off by Anvil-design 5-spoke alloy wheels. 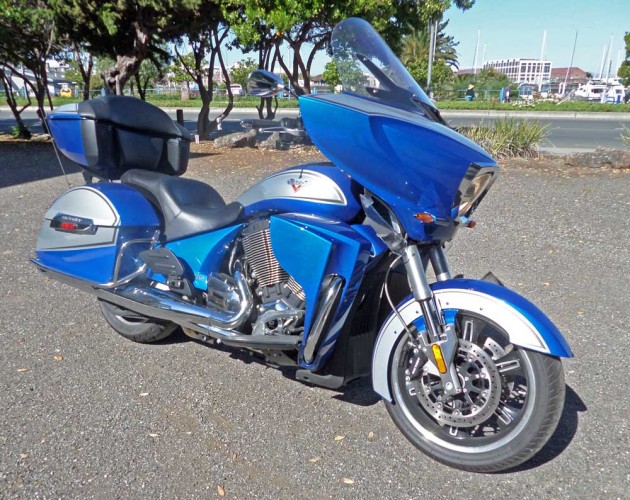 As with all Victory cruisers, a center character line runs the entire length of the bike from the front fender, through the fairing and fuel tank, and continues through the trunk pack to the rear fender with the stylized ?V? taillight and running light with a chrome trimmed ?V? rear directional light assembly. The streamlined, extended tank also features a distinctive side sculpting, as do the contoured, composite, lockable hard side bags. The fuel filler cap is positioned to the right of the centerline of the otherwise uncluttered tank top – the only non-symmetrical styling cue on the bike. 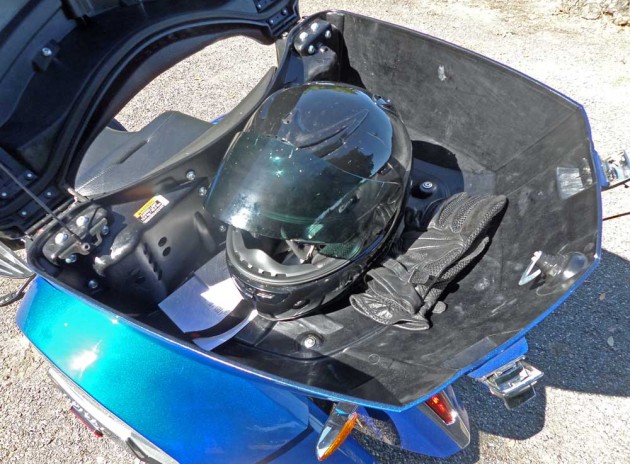 The upscale Victory Cross Country Tour is exceptionally pleasing to the eye even in its base form, and is not quite as futuristic or radical in appearance as the larger Vision models are. Large floorboards are provided for the rider, with adjustable boards for the passenger. The 2014 Victory Cross Country Tour goes a step beyond and adds a lockable, touring trunk pack with lots of storage space beyond the stylized, hard side bags with protective rails, providing the most cargo space of any production motorcycle, with a total of 41.1 gallons of storage. 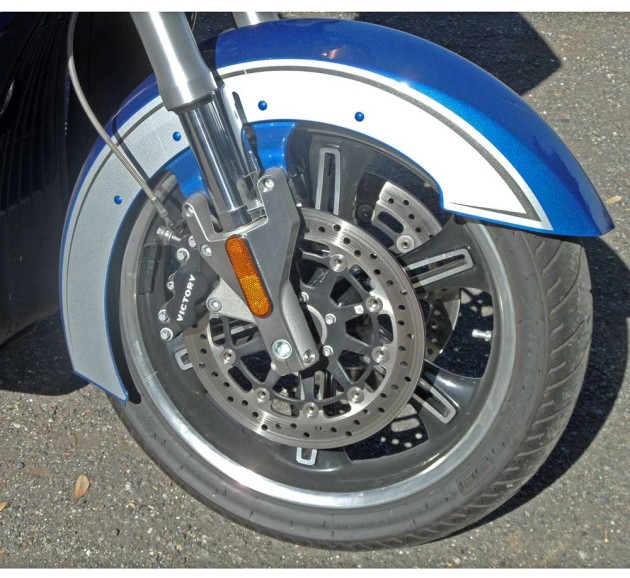 The 2014 Victory Cross Country Tour rolls on Dunlop Elite 3 rubber — 130/70 R18 up front and 180/60 R16 aft mounted on Anvil 5-spoke alloy wheels. The suspension componentry consists of front 43 mm inverted cartridge telescopic forks with 5.1-inches of travel and a single rear monotube gas shock, with a cast aluminum, constant rate linkage swingarm providing 4.7-inches of travel. Reining in the Cross Country Tour and bringing it to a halt is accomplished by a conventional hydraulic system with forward dual 300 mm floating rotors with 4-piston calipers and a single 300 mm floating rotor with 2-piston caliper in the rear with confidence inspiring ABS. Ground clearance is 5.8 inches. 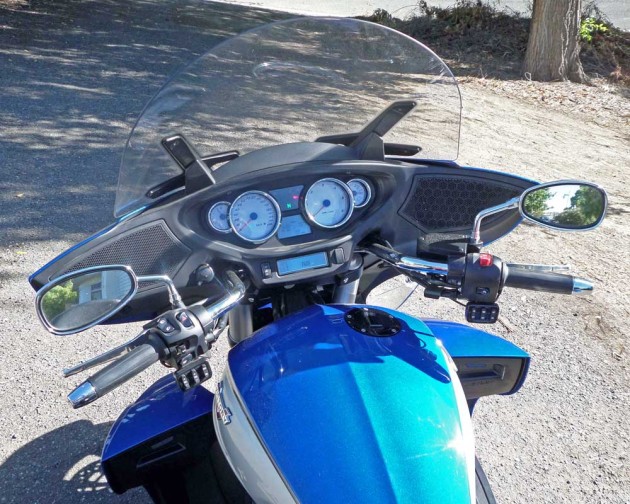 The seat is a low 26.25-inches ? a comfortable one-piece affair ideal for vertically challenged riders, with a stepped up passenger pillion and a strap grip for the passenger. Individual seat heating elements and heated handgrips with Hi and Lo setting enhance comfort in cold conditions. Instrumentation includes a large analog Tach and Speedometer flanked by fuel and motor temp gauges, along with digital clock, average speed, and fuel economy as well as other programmable info such as an odometer and trip meter. 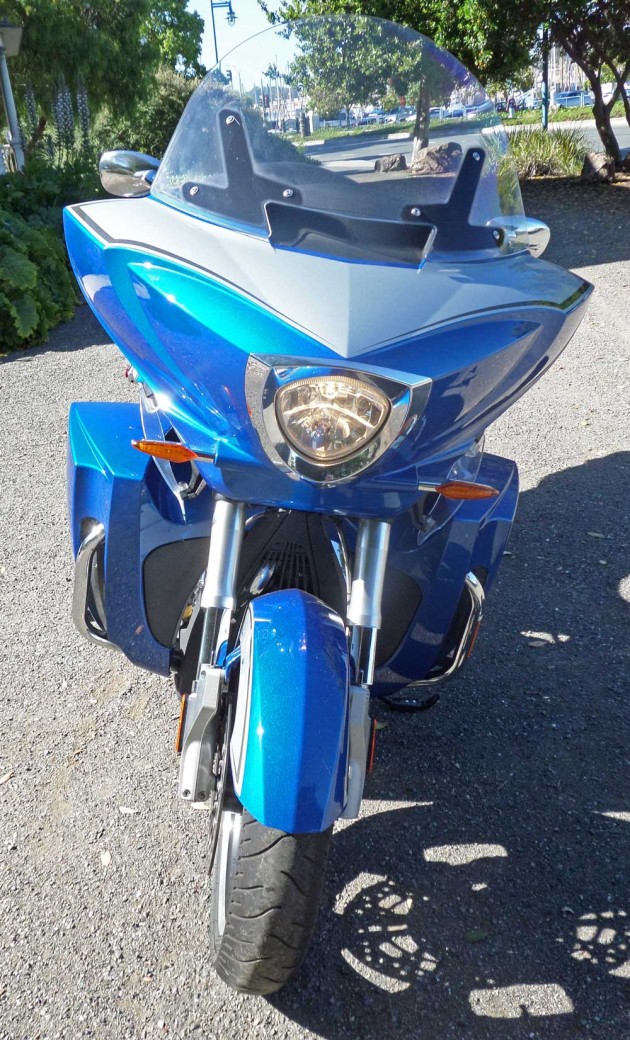 My test 2014 Victory was the Cross Country Tour model and it sported a strikingly beautiful two-tone Silver and Blue Metallic paint scheme with Charcoal graphic accents. The base sticker was set at $22,499. Add an estimated $250 for California emissions and another $250 for dealer prep and handling, which can vary from dealer to dealer. The estimated final sticker total came to $22,999. 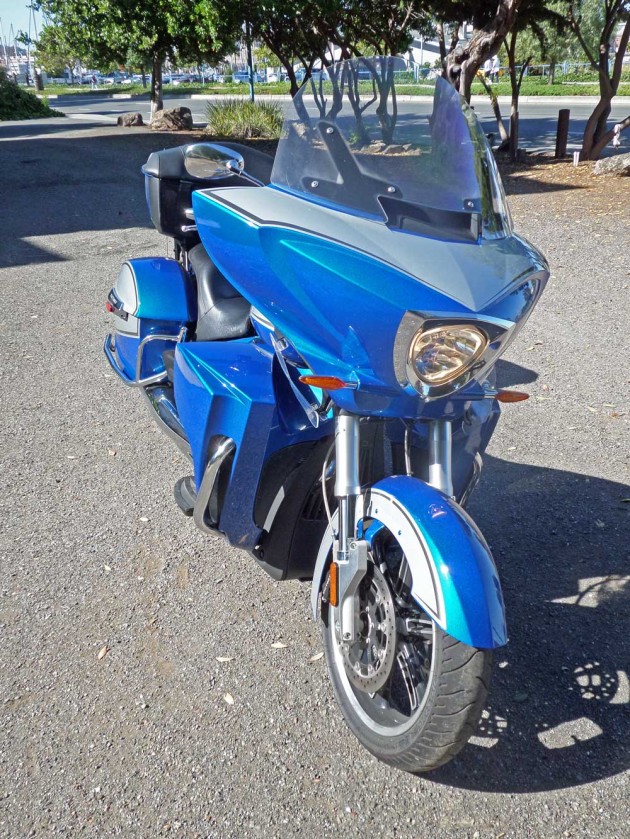 SUMMARY: The 2014 Victory Cross Country Tour edition displays an emotionally stirring and dramatically pleasing visual presence, with the styling cues rivaling the appeal of any custom Harley. All the angles and contours flow harmoniously, with the 106 cubic inch motor displayed in the frame as a jeweled focal point. The motor not only looks good, it hauls the mail with gusto. If there is a downside at all, it would be the stock exhaust note, which is pleasing, but would certainly benefit from a little more thunder. On the plus side of that issue, it?s much less likely to offend neighbors when cranking it up early for a weekend morning ride.

The riding position is particularly comfortable and well balanced. The Victory Cross Country Tour is indeed a touring machine where everything works well from the handlebar and floorboard placement to the well-padded seat with the built-in riser that provides lumbar support. The suspension travel smooths out rough road surfaces for more pleasant riding conditions. The six-speed gearbox is smooth with a true overdrive, and the positive neutral assist makes it easy to slip into neutral at stops. There?s plenty of power on tap with a very broad torque range allowing one to minimize shifting gears. 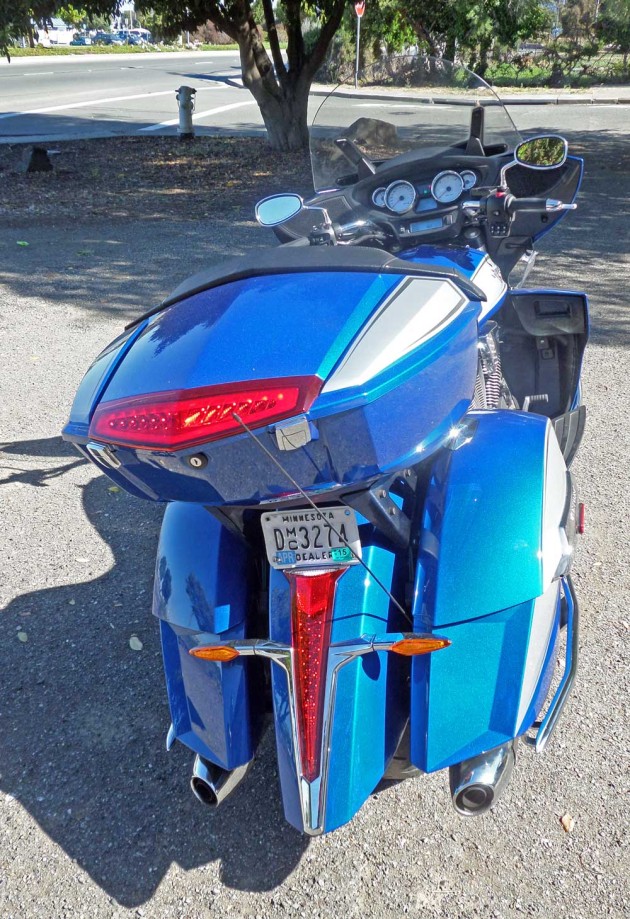 Contributing to added cruising comfort is Victory?s exclusive Victory Comfort Control System? with upper and lower air controls managing airflow that reaches the rider. In cold or wet conditions, the controls may be closed to block the elements. In warm weather, they may be opened for cooling airflow. There?s also an automotive quality cruise control that?s easy to activate and set, reliably maintains the desired speed. To de-activate it, simply press ?Off? or engage the clutch or brake. The Cross Country Tour comes with a tall windshield that delivers excellent protection from the elements. Two 12v power outlets ? one in the left front cargo compartment and one in the trunk are provided for keeping electronic gadgetry fully charged. 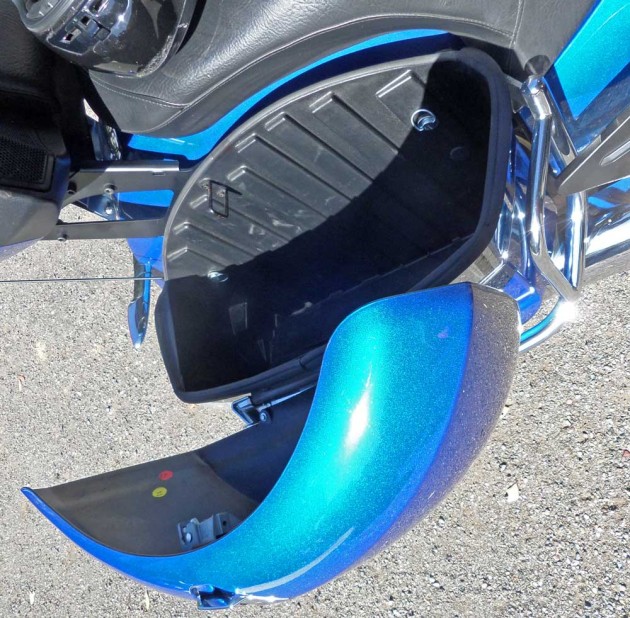 In the final analysis, Victory?s new 2014 Cross Country Tour provides a fully equipped custom bagger right off the showroom floor in a lineup that now seems to be complete, with a wide selection of models featuring a ride that should satisfy every rider type? at least in the Cruising and Touring categories. The Cross Country Tour proved to be an easily managed and stable mount, taking everything in stride, and fueling one?s passion for hitting the road on two wheels.