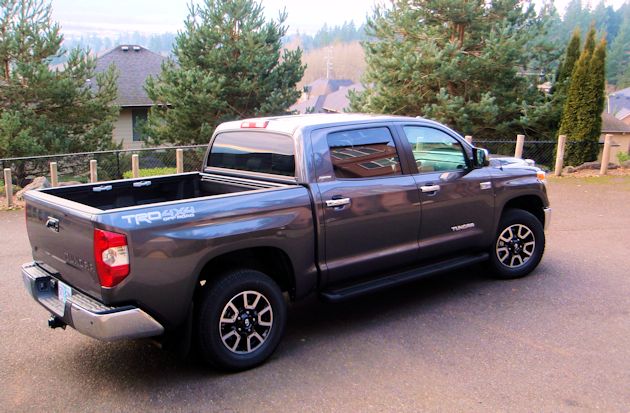 Toyota has never been able to make it into the same sales bracket (the big leagues) with the major Detroit full-size pickup players. Instead they build a big truck with the same elements that have helped Toyota dominate the automotive and SUV/crossover markets with vehicles like the Camry, Corolla and Highlander.

Those elements include a solid dependability, attractive design and good performance, but not necessarily as much rugged, macho attitude as the American brand trucks. We recently sampled the 2014 Tundra Limited Crewmax 4×4 during day to day driving conditions. We did this foregoing hauling, pulling and pounding through rugged off-road conditions. We suspect our driving was more typical of what the average big truck owners do ? running around and going places. 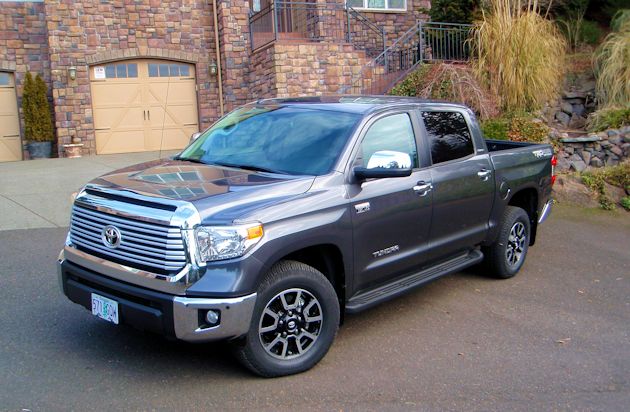 While it may have a foreign name, the Toyota Tundra is a totally American truck designed by Toyota?s Calty Design Research centers in Newport Beach, Calif., and Ann Arbor, Mich., and engineered by Toyota Technical Center in Ann Arbor, Mich. The V-6 and V-8 engines are built at Toyota Motor Manufacturing Alabama, in Huntsville, transmissions are built at a production facility in North Carolina and the final assembly is at Toyota Motor Manufacturing, in San Antonio, Texas. 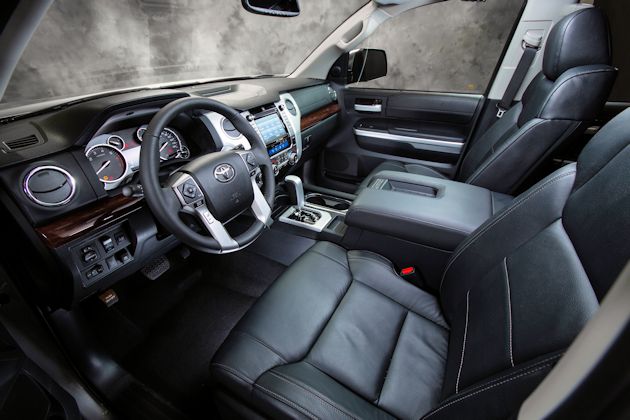 The Tundra is offered as a two-door Regular Cab or four-door Double Cab with two bed lengths or the super-sized four-door CrewMax with a shorter 66.7-inch bed. Combine that with five grades or trim levels, two- and four-wheel drive, three different engines and what seems to be hundreds of equipment configurations and you got about a gazillion ways to customize one of these trucks. 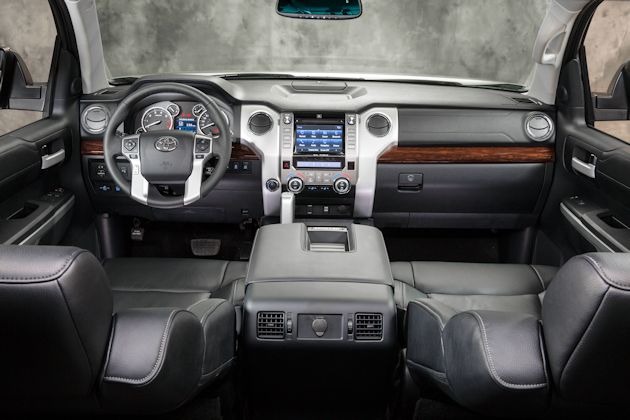 Rather than slapping different badges on each model to distinguish one from the other, each of the trim levels has unique design elements to set it apart. Inside the trucks are well thought out with large knobs that can be easily used while wearing work gloves. Gauges are clustered to easily scan, and there?s an easy-to-see center-mounted multi-information screen in the center of the instrument panel. The console includes multiple storage areas for personal items and electronics. While bucket seats are standard, both the Double Cab and CrewMax versions are available with a front bench seat. 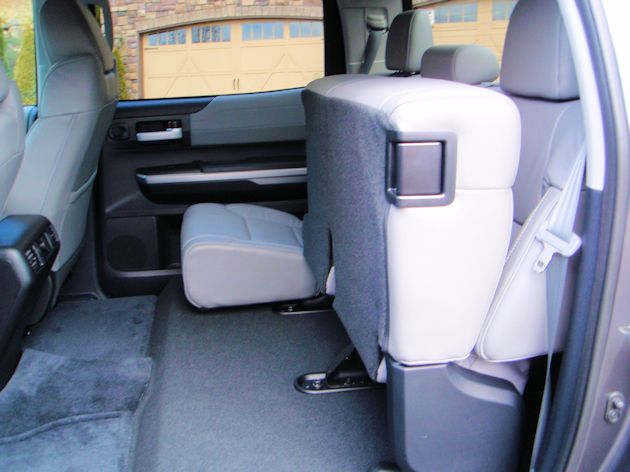 Barbara spent time in the new 1794 trim when she went to the national introduction last year and it was love at first drive. That trim name comes from the ranch that was founded in 1794 at the site where the current Tundra plant is located in San Antonio, Texas. Sharing the top trim level with the Platinum model, the 1794 has western theme interior with exclusive saddle brown premium leather-trimmed seating with embossed leather and ultra-suede accents. Like its counterpart the Platinum model, the 1794 has all the bells, whistles, technology and luxury appointments.

The entry-level Tundra is the SR, but the SR5 and Limited models are going to be the volume vehicles and they have impressive equipment levels. For example, all Tundra?s have a standard rear backup camera with a cross traffic alert to warn drivers of a vehicles moving behind to the left or right. Then there a features like Bluetooth hands-free phone and audio streaming, four-wheel vented disc brakes, trailer sway control, Entune? Audio systems, windshield deicer and on and on. Higher-level models offer much, much more. One other handy feature they all have is the switch a driver can use to adjust the headlights when the bed has a large load or while towing.

Depending on the model and the configuration, the Tundra has a payload capacity from 1,255 pounds to as high as 2,040 pounds. Owners who tow will have a capacity from 9,000 pounds to 10,400 pounds, again, depending on the model and configuration. Alternatively, for those really big jobs, don?t forget that it was a Tundra that pulled the 300,000-pound Space Shuttle Endeavor the last quarter mile of its trip from the Los Angeles airport to the Los Angeles Science center. Really, the only thing the Tundra doesn?t have is the Heavy Duty or Super Duty models. 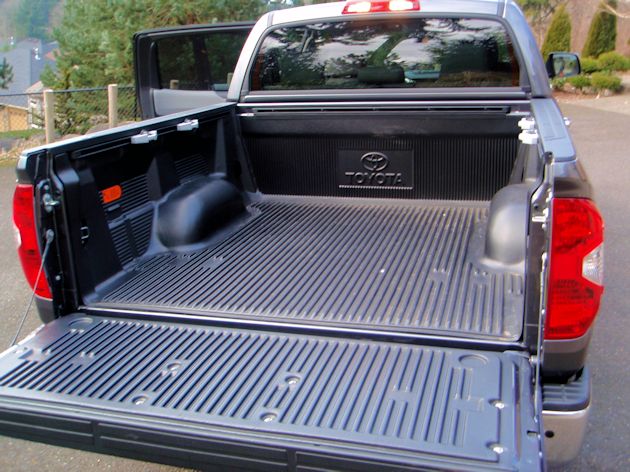 Each Tundra model has a rugged new bed and tailgate, with an integrated spoiler and ?TUNDRA? stamped into the sheet metal, creating a one-piece forged look. The tailgate is lockable and has an easy-lower-and-lift function that slowly drops the large tailgate with no bang. 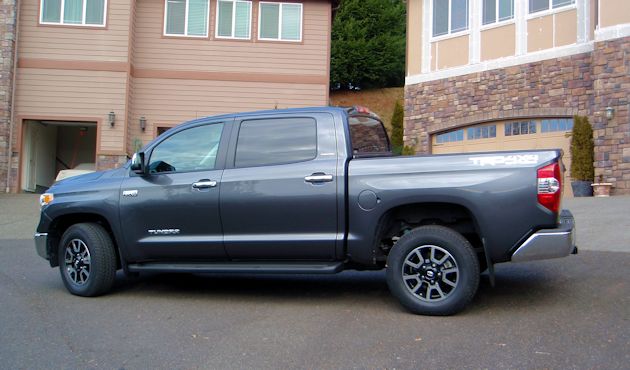 The Tundra with the 381-hp V-8 has plenty of power and excellent acceleration ? according to the buff magazines it hits 60 mph in just 6.7 seconds putting acceleration time in the same league as the large engine versions of the competitors. Our Limited test truck with the 5.7-liter engine averaged 14.3 mpg during our week of driving. The Tundra handles very well with little lean or sway. We thought the ride was a little more truck-like or rougher than some of the other new big trucks we?ve driven, but it is a truck.

The 2014 Toyota Tundra prices range from $26,915, including the destination charge, for a regular cab SR grade with V-6 engine and two-wheel drive up to $48,315 for the 1794 Edition CrewMax with a Flex-Fuel V-8 engine and four-wheel drive.

Overall, the Toyota Tundra is a very impressive truck with all the features and ruggedness buyers expect in a truck with all the luxury and technologies that shoppers are demanding. In addition it is a Toyota, which means it?s strong on dependability, design and performance. It would certainly be on our shopping list, if we were interested in buying a full size pickup. 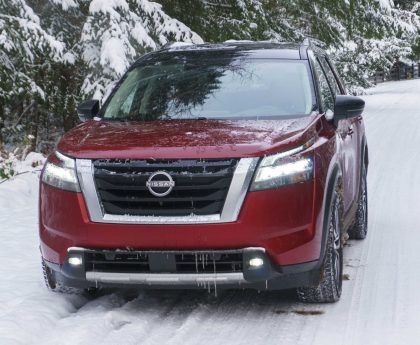 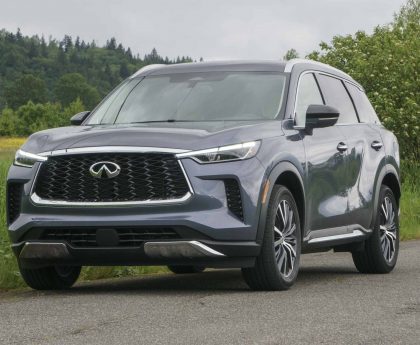