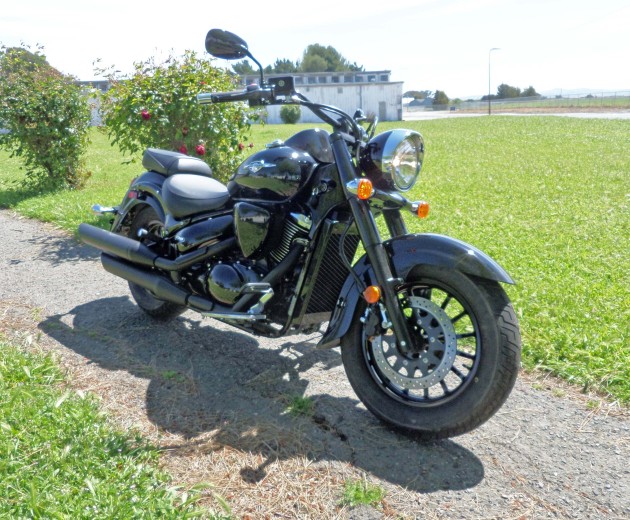 Since American Suzuki pulled the plug on auto sales in the U.S., the company?s focus has shifted exclusively to motorcycle and marine products. One of the first bikes to celebrate Suzuki?s motorcycle commitment was the C90T cruiser or bagger, which was all-new for 2013 and hearkened back to their 1998 VL1500 Intruder. Suzuki?s air/oil-cooled V-Twin production ceased in 2009 because of ever increasing emissions regulations and controls. The Boulevard C90T was made affordable by utilizing components borrowed from their Boulevard M90 architecture, even though it was a full sized bagger, tipping the scales at 800 pounds. The C90T shared the main frame, swingarm, engine and five-speed manual gearbox with the M90, which was actually more a blend of sport and street fighter styling or muscle cruiser. Enter the 2014 Suzuki Boulevard C50 B.O.S.S. ? a lighter, more manageable bagger. B.O.S.S. stands for ?Blacked Out Special Suzuki?.

The 2014 Boulevard C50 is available in four models: a base model C50; the more sinister Suzuki?Boulevard C50 B.O.S.S which is as dark as the night, featuring a metallic Black finish on the tank and fenders, along with other blacked out elements including the engine and covers; a C50 Special Edition and a touring version C50T. 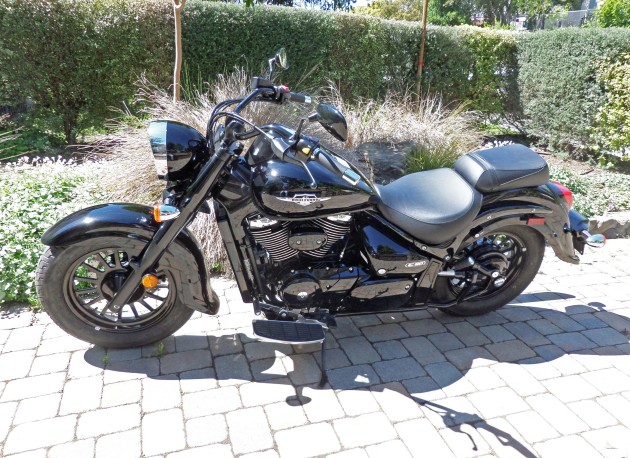 Power is derived from an 805cc, 4-stroke, 2-cylinder, liquid-cooled SOHC, 4- valve, 45 degree V-Twin with Suzuki fuel injection and electronic ignition. In similar fashion to the M90, the airbox is a twin affair with a central compartment beneath the fuel tank fed by a pair of sidepods that flank the engine. Exhaust consists of dual right-side blacked-out, reverse-slash-cut pipes that emit a pleasant V-Twin note that?s not obtrusive or objectionable. 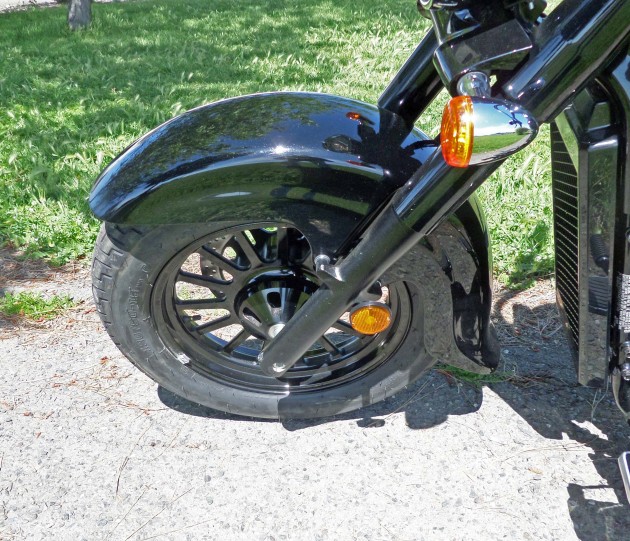 The engine?s power is geared to the rear wheel via a shaft drive through a constant mesh sequential five-speed manual gearbox. 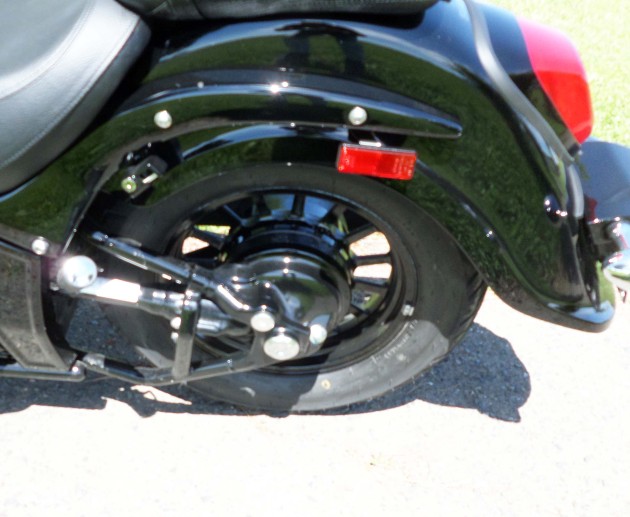 Suspension travel from the front forks is 5.5-inches, while the rear suspension is a Link-type and is shaped to mimic the hard-tail lines of a traditional cruiser, connecting a truss-style swing arm and a single shock absorber with 7-way spring preload adjustability and 4.1-inches of travel. 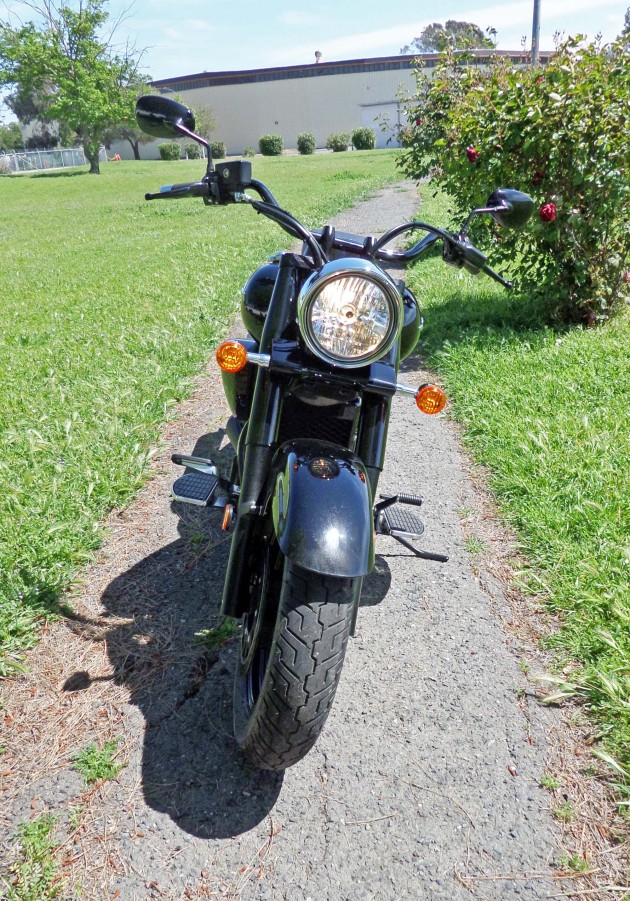 In terms of styling, the Suzuki Boulevard C50 B.O.S.S. is all cruiser, with a classic retro flavor. The riding position provides an ideal cruising rider triangle, with large floorboards (pegs for a passenger), proper bar angle and large, comfortable, accommodating seat ? a single seat for both rider and passenger. The Boulevard C50 B.O.S.S. comes without either a windshield or saddlebags ? only the C50T provides these conveniences. A well-placed and easy-to-use locking helmet holder is positioned on the rear fender?s left side. The 27.6-inch seat height will accommodate a variety of rider physiques, allowing most to get its 611-pound mass off the side stand ? nearly 200 pounds less than the C90. 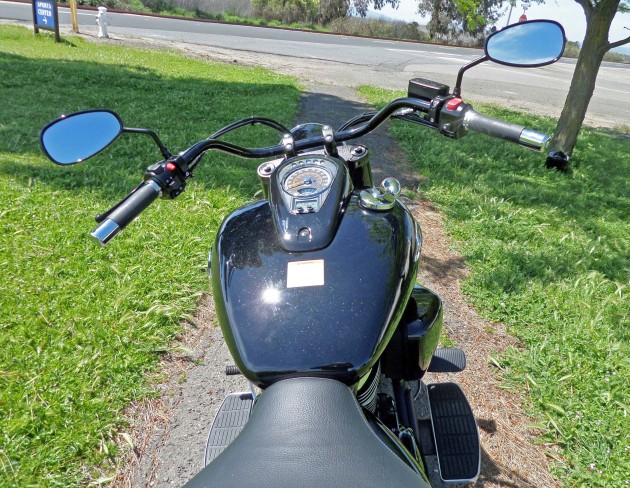 Easily visible atop the fuel tank, the C50 B.O.S.S. features a multi-function instrument cluster that?s highlighted by a large analog speedometer. The cluster includes a convenient gear-position indicator, a fuel gauge, as well as a clock and a trip meter, plus indicator lights for low fuel, turn signals and more, for an instrumentation level not often found on classically style cruisers.

SUMMARY: Riding the 2014 Suzuki Boulevard C50 B.O.S.S. serves up a pleasurable riding experience once off the side stand. Initially, the bike?s appearance is a little intimidating, but as already stated, it?s smaller and lighter than it?s C90 sibling, and it is nicely balanced and easily managed once up and rolling. The wide handlebars, forward mounted floorboards, kicked-out, 33-degree rake and long wheelbase combine to complement the bike?s riding position and maneuverability. 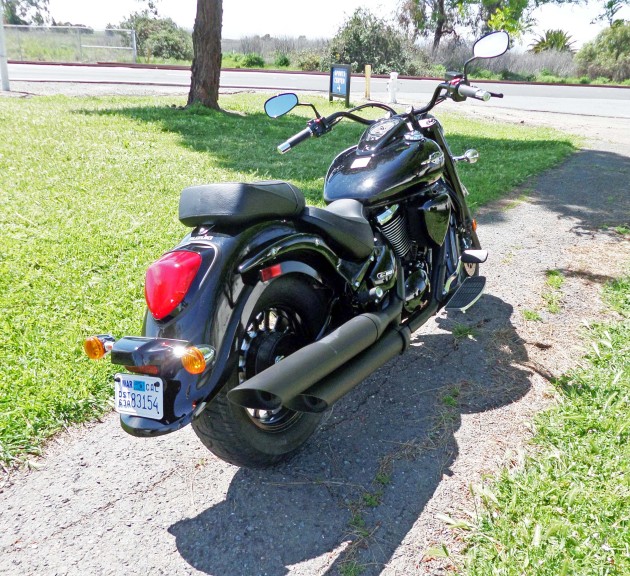 The instrument cluster includes a convenient gear-position indicator, a large fuel meter, and a clock are always on display, with other functions addressed by traditional warning lights.

The power delivery is very smooth, particularly in the higher ranges, but the shaft drive renders a notable ?jacking? effect at low speeds in the lower two gears, which may be offset by lightly feathering the clutch ? a trait that I would rather not have to live with, and directional signals are non-canceling. Aside from these small nits to pick, the 2014 Suzuki Boulevard C50 B.O.S.S. is an attractive, feature laden, comfortable and affordably priced cruising bike with a classic look. It delivers a comfortable and enjoyable ride. It represents a welcome addition to Suzuki?s stable of Boulevard cruising bikes. 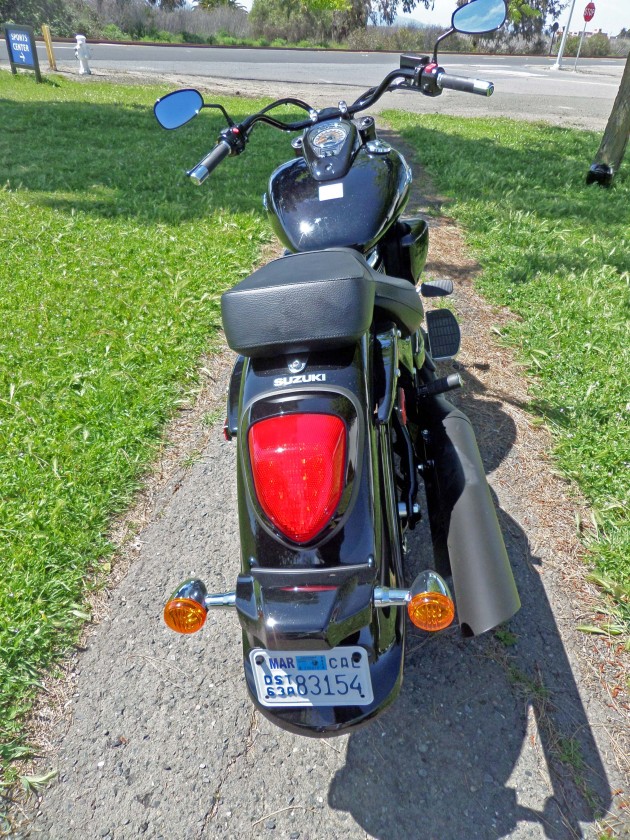