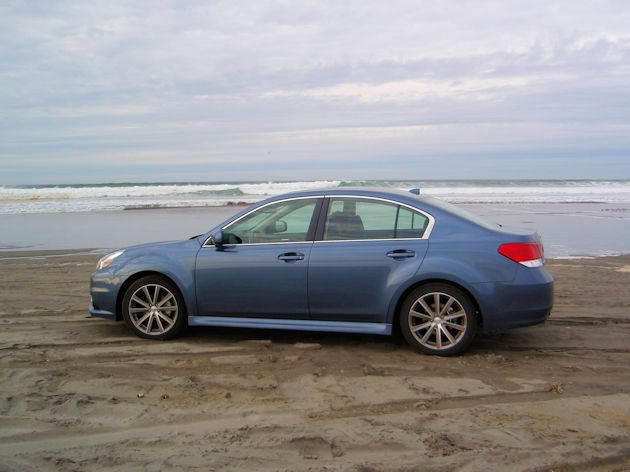 Subaru has been the Cinderella story of the automotive business over the last five years posting consecutive sales records each year while much of the auto industry was struggling to stay afloat. For 2013 alone, they had a sales gain of 26.2 percent over the previous record in 2012 selling 424,683 vehicles. It?s not that Subaru was necessarily building the best looking or the fastest or most innovative cars, but more that they were doing everything very well from vehicle quality to their marketing campaign.

While living in a rural community in Central Oregon where the Subaru was the top selling car brand, we most often suggested a Subaru when asked to recommend a car. This was an easy recommendation because we saw how well friend?s cars held up and how loyal the owners were to the brand. The cars seemed to last forever, they are an excellent value and every model (except for the BRZ sports car, which is rear-wheel drive) is all-wheel drive. 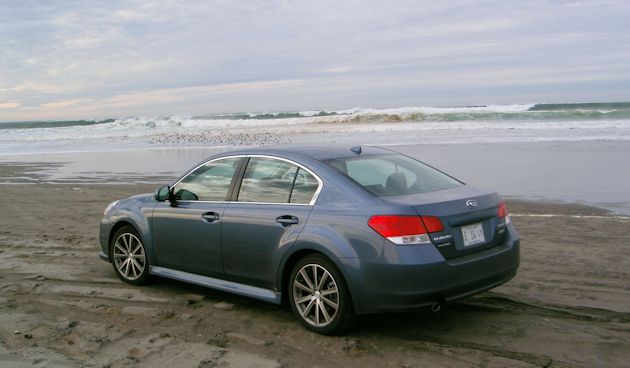 It has been a couple of years since we had driven a Legacy, so were pleased when the 2014 Subaru Legacy 2.5i became available in the press fleet. We decided to take a trip to the Washington coast in order to get a sense of the latest changes to the popular mid-size sedan.

The road from our home just east of Vancouver, Wash. to Long Beach, Wash., includes a stint north up the West Coast?s main thoroughfare, Interstate 5, along the Columbia River. Then, when the river turns west at Long View, Wash., we continued to follow the river on State Highway 4. The two-lane road winds along the shoreline affording views of river traffic and through Washington rain forests. It was a good chance to test ride comfort, steering and an occasional romp around slow moving traffic. 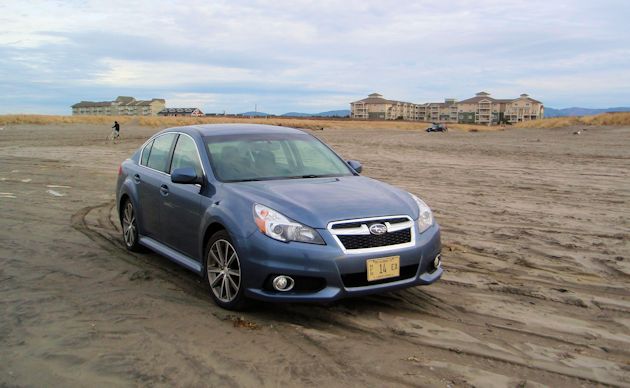 The Legacy drives nicely. The road noise is about average, but the steering and ride comfort are very good. Passing times are about average for a mid-size four-cylinder sedan. With colder weather and the always present chance of rain, we felt safer knowing we had all-wheel drive as an additional safety feature.

Subaru debuted a new170-hp 2.5-liter double overhead cam four-cylinder Boxer engine in 2013. The boxer engine is designed flat with two cylinders on each side moving horizontally. This configuration keeps the center of gravity low and has proven to be quite efficient. It?s the same configuration as used by the Porsche 911, Boxster and Cayman sports cars. 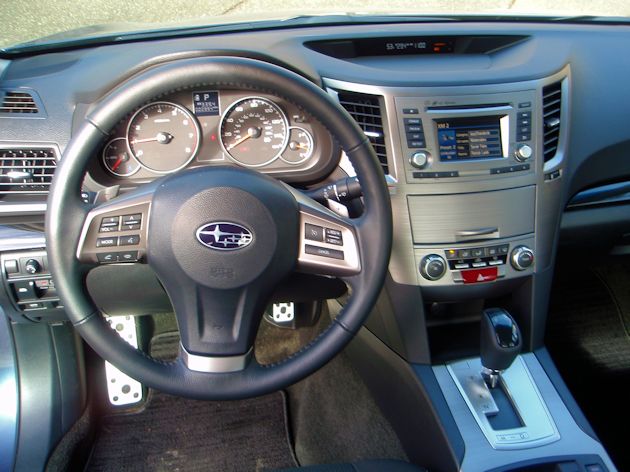 The Legacy 2.5i has a standard six-speed manual transmission or optional Lineatronic CVT (continuously variable transmission) with manual mode steering wheel-mounted paddle shifters. We liked being able to quickly shift the automatic transmission down to a lower fixed gear ratio before entering corners to utilize engine braking. The paddle shifters simulated a six-speed transmission and could be briefly activated when the car was in ?drive?, or held to a gear when the transmission was in the ?manual? mode. 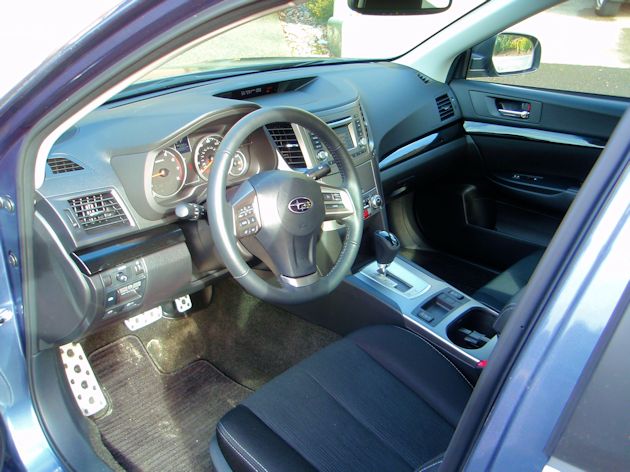 The new second-generation CVT is standard equipment on the upper level four-cylinder models, like the Sport, which we drove. The engine transmission combination has an EPA fuel economy rating of 24 mpg city, 32 mpg highway and 27 mpg combined. We averaged 29.4 mpg on our trip to the coast driving at or near the posted speed limits. The 0 to 60 mph acceleration time is 8.4 seconds, which is about average for four-cylinder mid-size sedans. 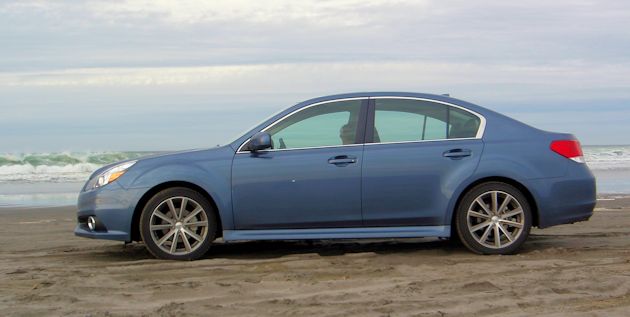 Styling was upgraded in 2013 with a sportier front end, so no cosmetic changes were made for 2014. The interior is roomy with comfortable cloth seats (heated in the front) and with very good rear legroom. Cargo space is about average at 14.7 cubic feet, but the rear seat back can be folded in a 35/65 split to expand cargo space into the rear seating area. 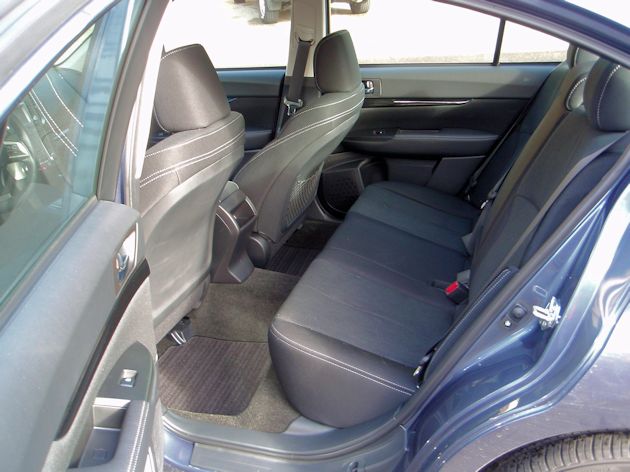 The Legacy is available in five trim levels: 2.5i, 2.5i Premium, 2.5i Sport, 2.5i Limited and 3.6R Limited. Base prices, including the destination charge, range from $21,090 for the 2.5i with manual transmission to $29,690 for the 3.6R Limited. All the 2.5i models are also available with a Partial Zero Emissions rating ($300), which is required in California and 12 other states for lower emissions. The 3.6i with all three available option packages is priced at $33,730 adding a moonroof, navigation and the EyeSight? System. 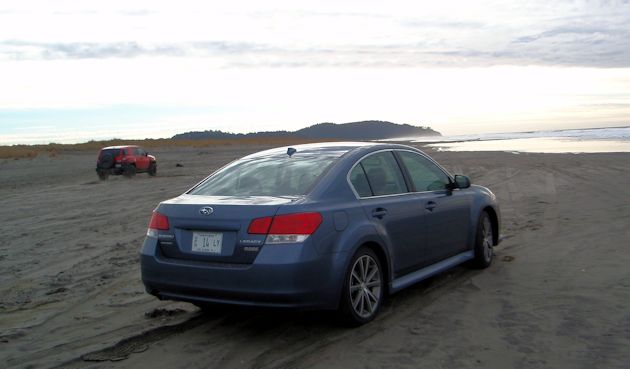 The available EyeSight driver-assist system, integrates Adaptive Cruise Control, Pre-Collision Braking and Vehicle Lane Departure Warning. It?s capable of detecting pedestrians or objects in the path of the vehicle to slow or sometimes take the vehicle to complete stop when the driver takes no evasive action or doesn?t brake hard enough.

The Legacy gets top marks in the safety column with five star ratings in all categories of the government safety ratings. It has the latest electronic technologies and a new feature as part of the Hill Holder System, a brake Override system ensures that cuts engine power when both the brake and accelerator are pressed simultaneously.

In the final analysis, the 2014 Subaru Legacy 2.5i was a very enjoyable car to drive. The ride is comfortable with nice balance and control. We?d like a little less road noise, but didn?t find it too overwhelming and it?s likely a result of the tire tread pattern on the rough pavement surface. The engine and transmission combination was more driver friendly than we would normally have expected for a CVT ? we especially liked the ability to manually shift the system. At 29.4 mpg, we thought the fuel economy was better than expected, especially for an all-wheel drive car. 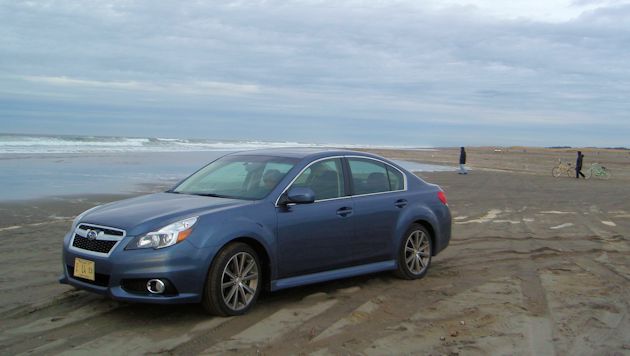 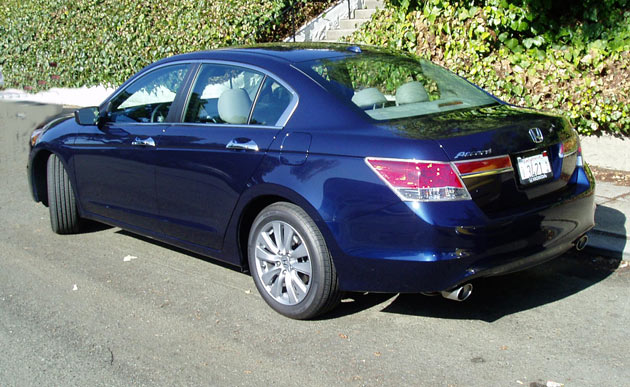 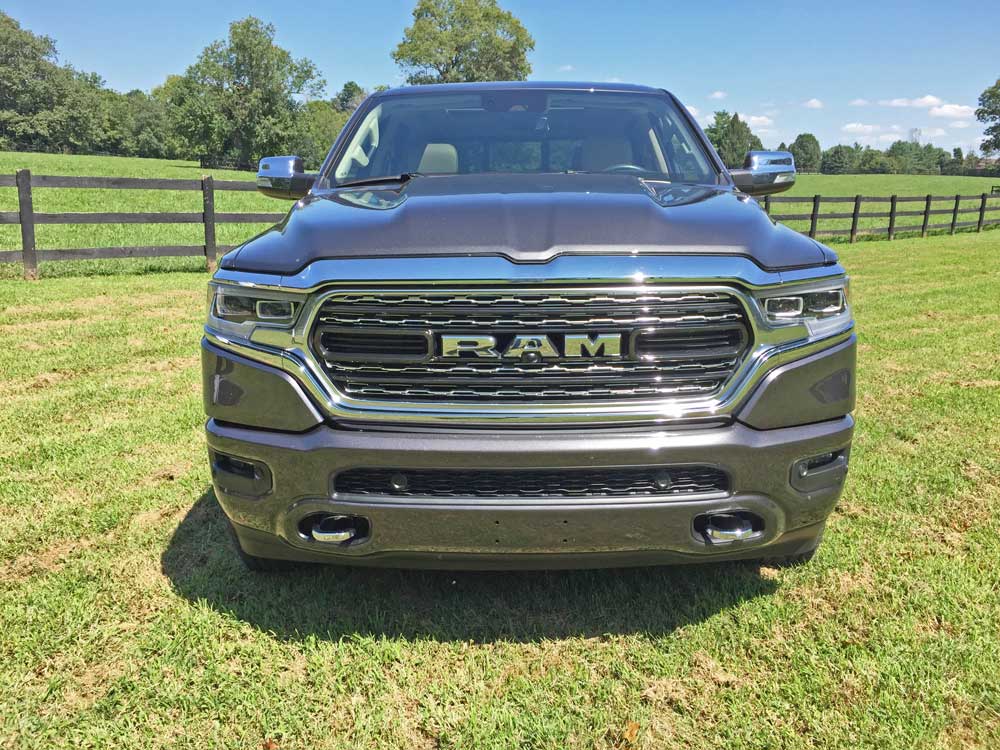