The Spirit of Ecstasy is elevated to new heights 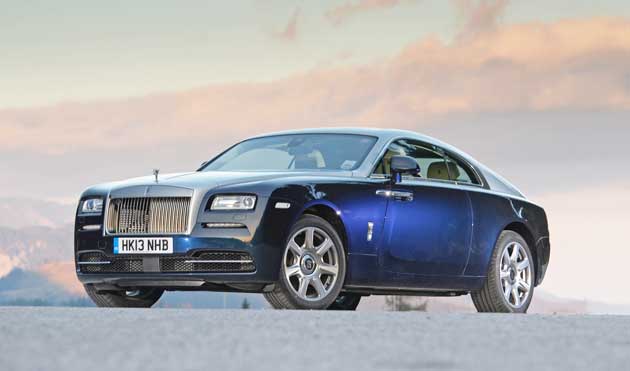 Scottsdale, Arizona – There are some automobile marques that are legendary and are to be revered as perhaps the pinnacle of the luxury automotive kingdom. Rolls-Royce is certainly such a marque, and it has been so since its very beginning in 1904 when Charles Stewart Rolls and Sir Henry Royce formed an alliance and founded the Rolls-Royce company whose philosophy was to ?Take the best that exists and make it better: when it does not exist, design it?. That statement by Sir Henry Royce remains the driving force of the Goodwood based company today and constituted the development of the 2014 Rolls-Royce Wraith. The Goodwood facility is the new home Roll-Royce, and is located on what was the estate of Lord March.

Rolls-Royce has long been noted for its pioneering spirit in the development of vehicles and craft defining the company during the early 20th century through adventures on land, sea and in the air, which led to holding three consecutive world speed records. The first Roll-Royce Wraith was built from 1938-1939 by Roll-Royce at their Derby factory and supplied to independent coachbuilders as a running chassis. Wraith, a word of Scottish origin alludes to an almost imperceptible force, something rare, agile and potent, a spirit that will not be tethered to the earth ? a ghost or phantom if you will.

The 2014 Roll-Royce Wraith represents a vehicle unlike any other Rolls in existence today ? it is the ultimate gentlemen?s (or lady?s) gran turismo. It comes in the form a fastback coupe that narrows in the rear, approaching the boat tail design that was also popular in the 1930s, though not to the full extent. Since it didn?t exist in the current Rolls-Royce model lineup, the familiar company call to ?design it? came into play. 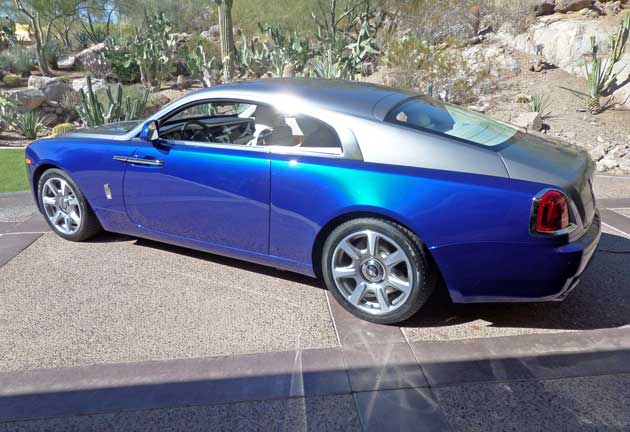 Rolls-Royce has, more often than not, been thought of as a boxy, somewhat stodgy vehicle suitable only for the extremely wealthy mature individual, to be chauffer driven in most cases, and not particularly noted for their performance capability. The most recent Ghost has successfully altered that image to a degree, but the new Wraith is sure to favorably change the course of the British automaker in terms of its popularity, particularly with a much younger, although still wealthy and performance oriented audience. 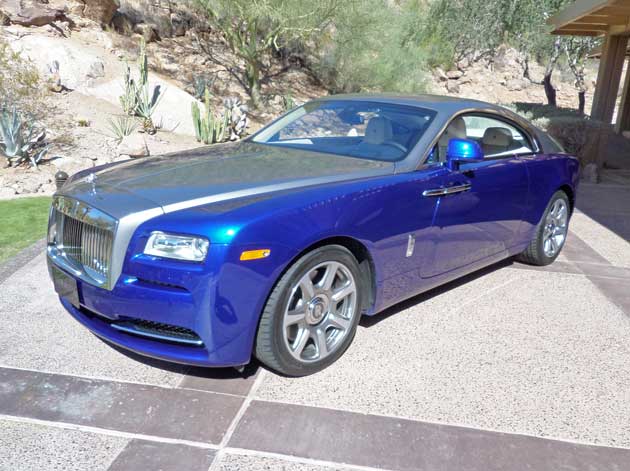 The 2014 Roll-Royce Wraith is an expression of effortless grace and beauty, based on a shorter wheelbase platform with a wider rear track and a very potent and innovative powertrain. It may well be the most beautiful Rolls-Royce built in the eyes of many beholders (it certainly is in mine), and it is definitely the fastest and most powerful Rolls-Royce playing host to the legendary ?Spirit of Ecstasy? or flying lady, radiator mounted mascot created to date. 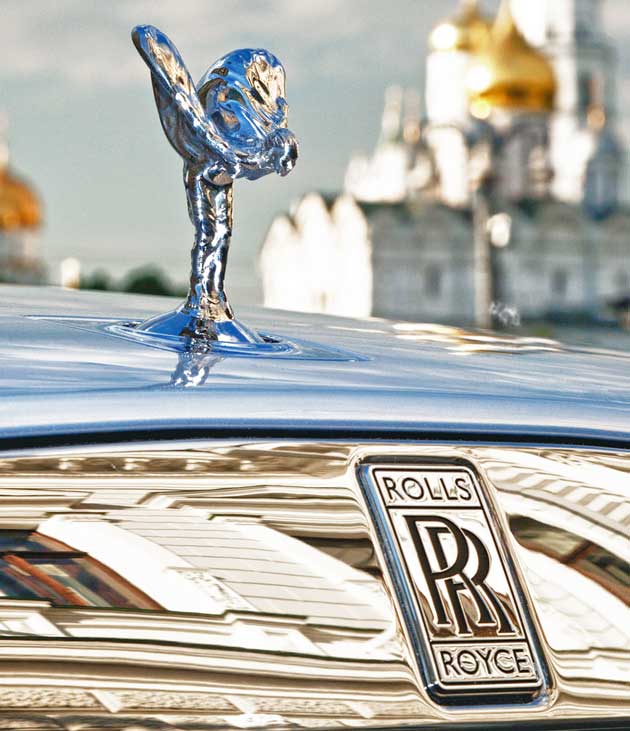 The bold new fastback design displays a high waistline combined with a low roof line and raked cabin form that accelerates the eye rearwards, while tension in its surfaces suggests a car set to move quickly. Design cues may be traced through past generations; effortless poise with accentuated rear overhang, elegant coach doors that are hinged at the rear and open from the front. The Wraith sports a longer bonnet (hood), raked cabin and deeply recessed pantheon grille, which is recessed 1.8 inches when compared with Rolls-Royce Ghost. The surround has also been lengthened by 1.6 inches, and the bumper has been designed to incorporate the number plate surround with a focused lower air dam. 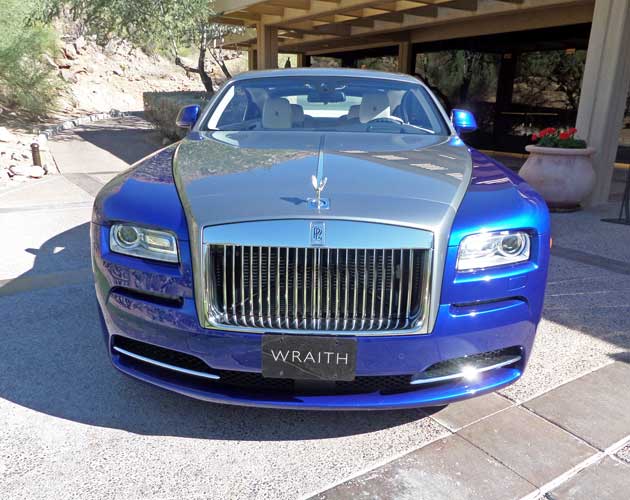 Recessed and finished in black, the lower valance mesh helps to create depth echoing that of the grille. The 102-year-old Spirit of Ecstasy figurine is positioned further forward on the grille and angled by five degrees, helping to define the development of three harmonious lines: the waftability line, waist line and roof line.

In profile, the fastback form sets this latest Rolls-Royce design apart from its thoroughbred stable mates. A dramatic combination of linear tension and expressive line contribute to Wraith?s elegant and powerful character. The window or glass graphic sweeps downwards to the coach door swage line. The frameless coach doors and lack of a b-pillar add to the car?s elegance. 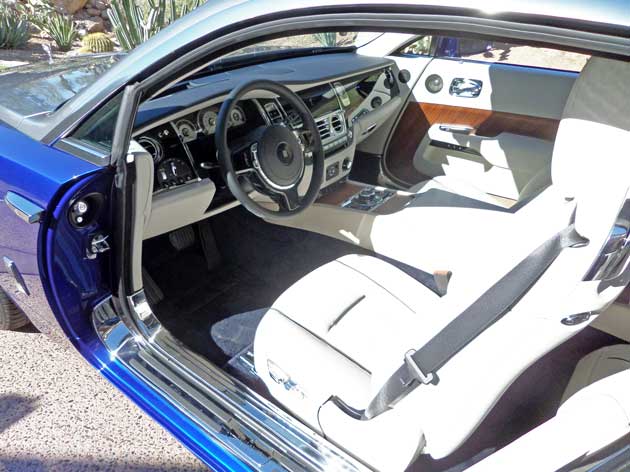 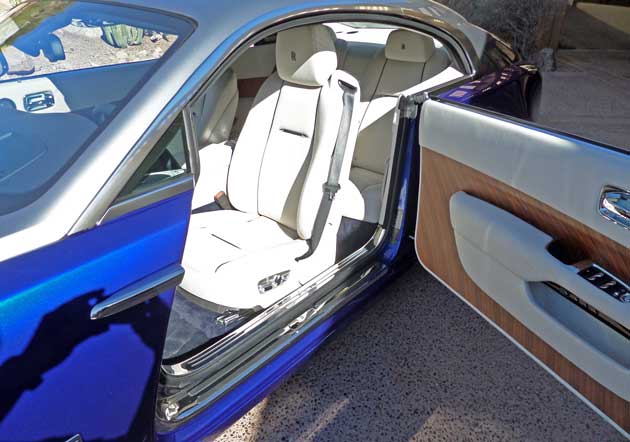 Doors open to reveal an exquisite interior and are closed from inside at the touch of a button. With all four windows down, the side opening adds length to Wraith?s character. The chrome surround frames this graphic, pulling the eye seamlessly down onto the rear wheel. A fixed glass roof may be ordered as an option, complete with leather sun blind. Stainless steel door handles conceal barrel locks maintaining clean exterior panels. Three new wheels include a standard 20? seven spoke design along with optional 21? seven spoke part polished and 21? five-spoke part-polished, with bi-color choices. 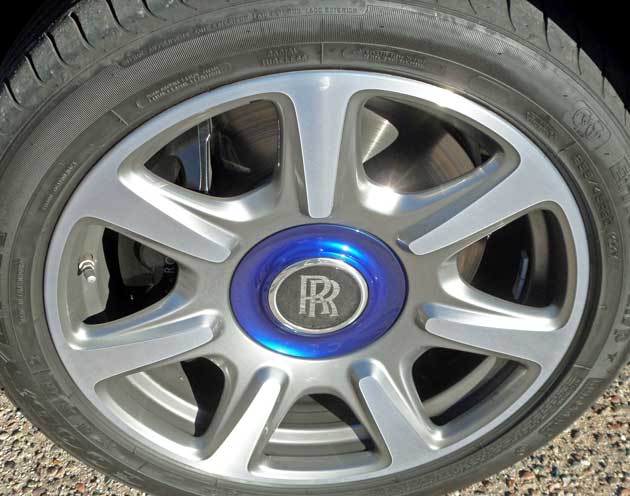 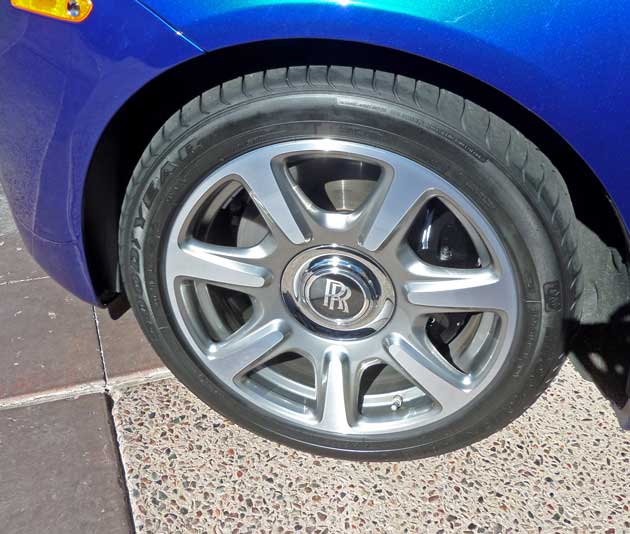 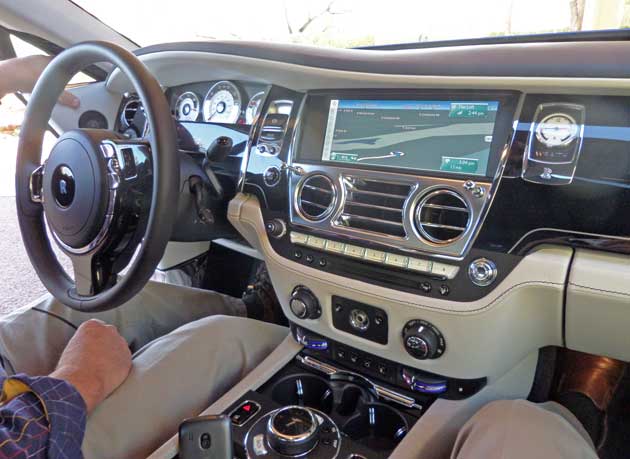 Inside, the eye is drawn to the contemporary paneling finished in either wood or leather, and adorning the inside of the doors and sweeping around the entire lower space. The mellow interior presents the debut of a special new wood treatment, Canadel Paneling, a beautiful open grain wood veneer angled at 55 degrees and curved to the contours of the doors. Black chrome dials are framed by a black horseshoe sweep. Blood orange tips to gauge indicators pay homage to the marque?s aviation heritage while the steering-wheel is thicker rimmed. Four individual seats envelop the driver and occupants ensuring comfort and contemporary elegance. Touches like the chrome bullet tips to recessed piping on the seat panels further enhances the sense of a vehicle tailored for performance. The finest Phantom-grade natural grain leather adds to the luxury, its tactility unequalled in the motor industry. Detailing to armrests and panniers reinforce the opulence, inspired in their design by fine saddle-making.?Storage compartments for two iPads add convenience for rear seat passengers; with automatic door closing buttons located behind the a-pillar aid those in the front. 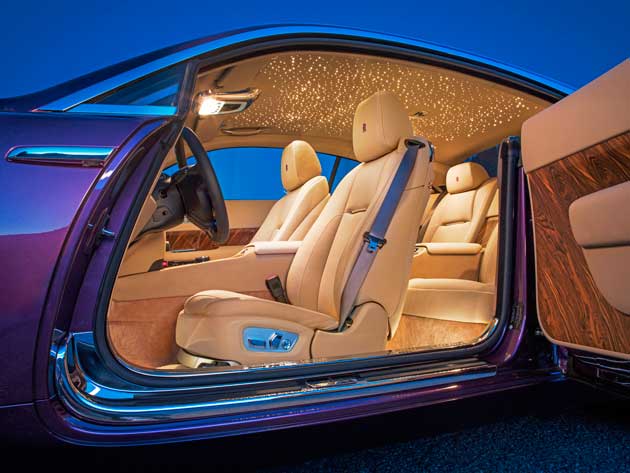 One of the marque?s most popular Bespoke features is now available ? the Starlight Headliner that presents a starry night sky within the cabin, an effect is achieved by 1,340 individual fibre optic lights hand-woven into the leather roof-lining by craftspeople in the Rolls-Royce leather shop. Bespoke, by the way is the operative word for attaining virtually any treatment to personalize one?s Rolls-Royce Wraith from exterior paint color to interior materials and custom ordered accessories. 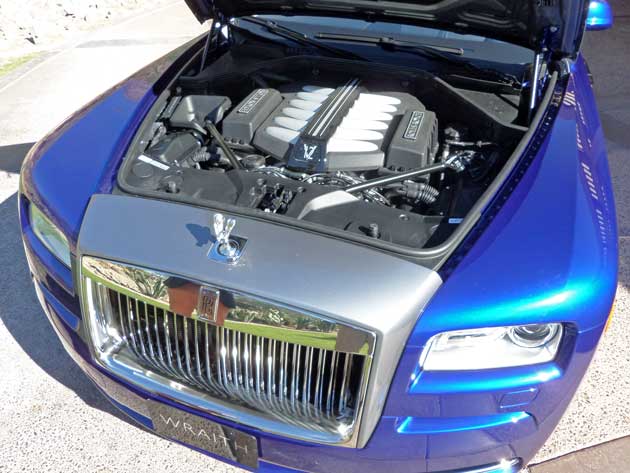 The incredibly rapid motive force is supplied by a 6.6-liter, DOHC, 48-valve,?Twin Turbocharged V-12 with Direct Injection that delivers 624 horsepower at 5,600 rpm, while generating 590 pound feet of torque in a range from 1,500 to 5,500 rpm. The engine is positioned forward in a longitudinal orientation, and is married to an innovative satellite aided eight-speed automatic transmission that meters power to the rear wheels. The Satellite Aided Transmission uses GPS data to see beyond what the driver sees, anticipating the next move based on location and current driving style, then selecting the most appropriate gear for the terrain ahead. Corners, motorway junctions and roundabouts are all anticipated in advance, allowing the Wraith to be constantly poised to deliver optimum performance. 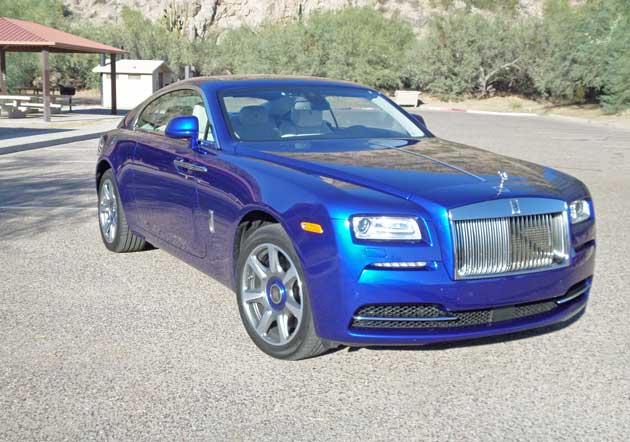 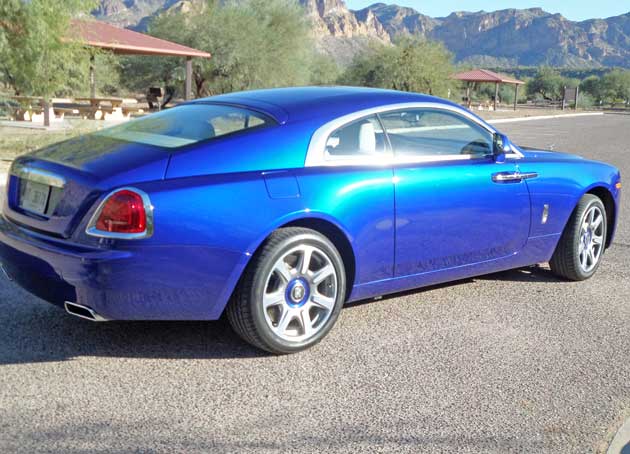 SUMMARY: The 2014 Rolls-Royce Wraith, in addition to being stunningly gorgeous, also happens to be the epitome of luxurious motoring blended with phenomenal performance attributes. Despite its astounding acceleration and agile handling in spirited driving scenarios, the Wraith is every bit a Rolls-Royce, without sacrificing any of the marque?s noted legendary opulence, and it is entirely at home cruising about at modest speed. The ride quality is superb ? comfortable, planted and stable thanks to the air suspension.

Upon entry, the Wraith feels huge and heavy, and rightly so, because it is, but it belies that initial impression, because it handles with a deftness and smoothness not expected. In fact, I continually found myself exceeding the posted speed limit with 75 mph seeming more like 45 mph. The Wraith wants to run with the wind, but it also halts with aplomb. Keep in mind, that it is not a sports car, but rather a Gran Turismo that truly takes Rolls-Royce to a higher level in terms of style and drivability.

Connectivity is available through the Spirit of Ecstasy Rotary Controller which is located on the center console which runs from front to rear and takes the place of a touchscreen, much like parent company BMW?s iDrive rotary control. 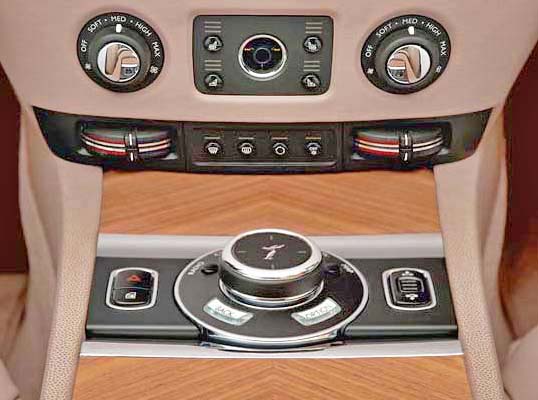 There are no robotics involved in building the Wraith. It is built entirely by hand, as is the case with all Rolls-Royce vehicles. Craftsmanship and attention to detail are paramount, as evidenced by superlative touches such as umbrellas stowed in the leading edge of the extra wide door opening and the wheel center caps that are self-righting, always leaving the RR logo upright.

The Wraith lends itself beautifully to a two-tone exterior paint treatment, but is equally appealing to many in a monotone color application. It is already sold out through May of 2014. The company?s goal is to deliver within 6 months of order, but that can vary depending upon the level of Bespoke features.

My test drive of the 2014 Rolls-Royce Wraith took place on Halloween and to be sure it was definitely a treat. 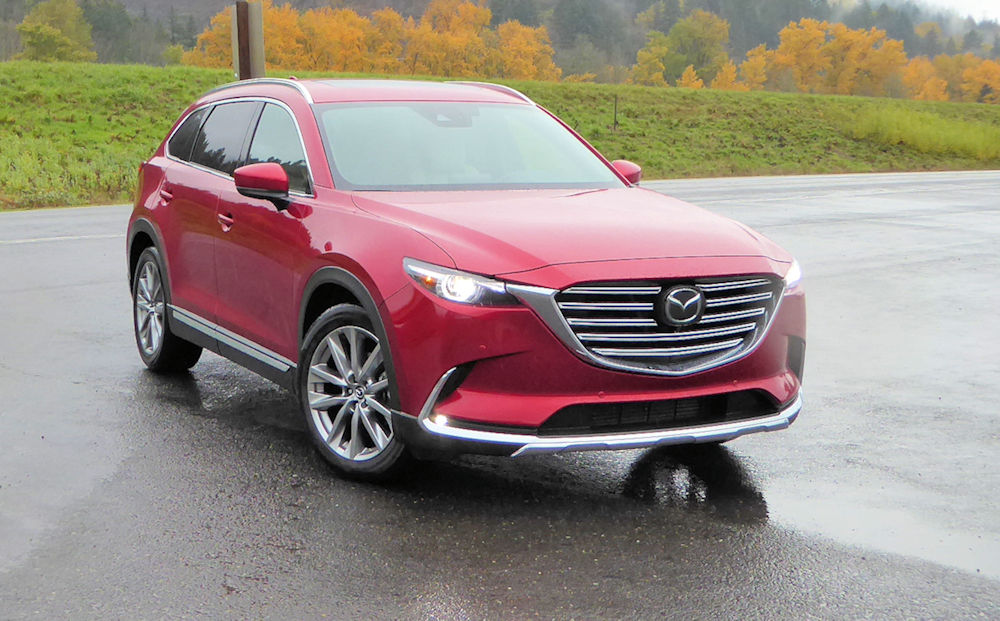 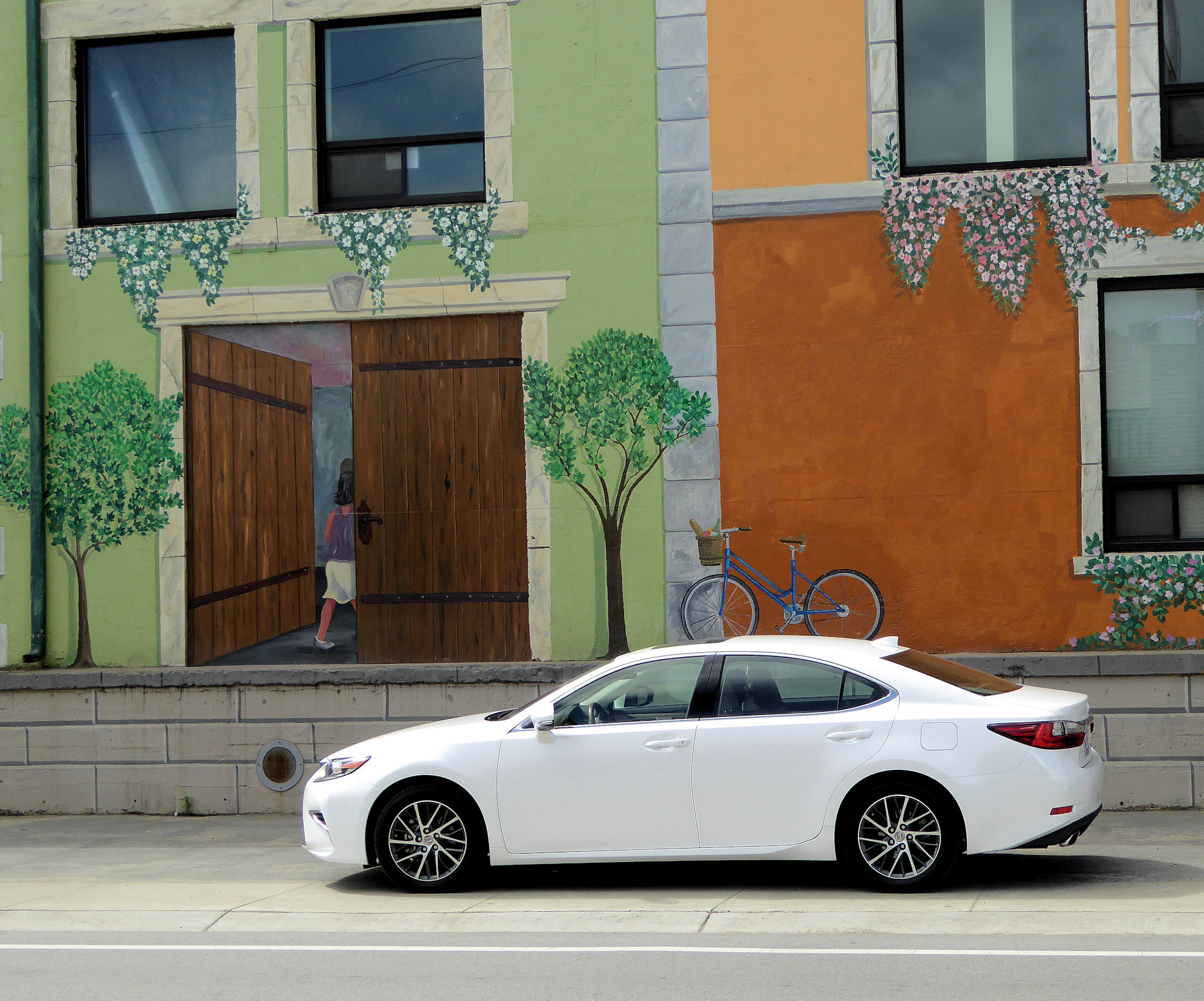