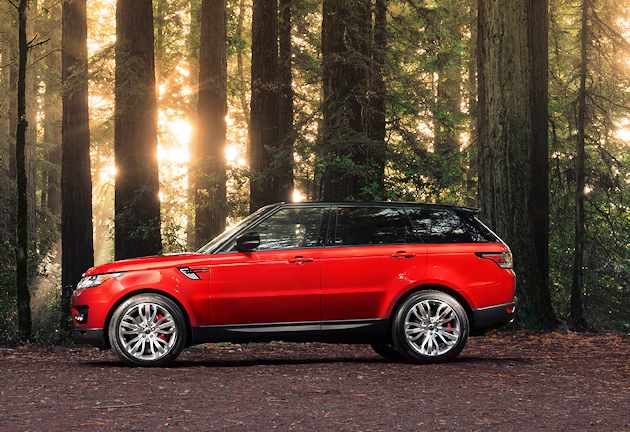 Menlo Park, Calif. ? A few weeks ago I wrote about driving the new Jaguar F-Type sports car on a variety of roads near Mount Rainer in Washington state. The drive was followed by high-speed laps on a challenging road course and then runs through an autocross course. (https://ourautoexpert.com/2014-jaguar-f-type-test-drive-2/) After the drive, I concluded that the Jaguar F-Type is probably the most impressive car I had driven in the last year.

What?s interesting is that they are both by the same company, but they are on exact opposites of the automotive spectrum ? pure sports car versus hardcore sport utility vehicle. I knew the new Range Rover would be great off-road, but didn?t expect it to be so impressive on road. 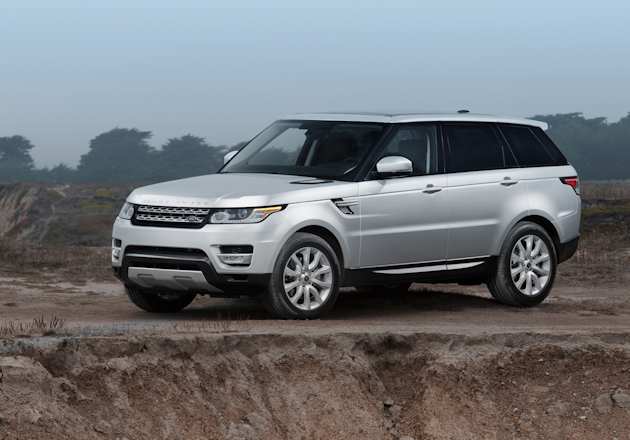 What caught my attention initially was the silence in the Range Rover Sport cabin. Even at freeway speeds, there was no sound of air moving by the windows or panoramic sunroof and virtually no road noise from the tires.

For our introduction to the 2014 Range Rover Sport, the drive route took my driving partner and me south on one of the world?s most beautiful freeways, the I-280. When we reached the infamous Highway 17 our preprogramed navigation system routed us toward the coastal community of Santa Cruz, but we were quickly re-routed once again onto one of the narrow and curvy back roads that weave through the mountains under the canopies of Oak and Redwood trees. These roads are treacherously narrow and studded with massive Redwood tree trunks and 100-foot drops instead of a shoulder. As an added challenge in the early morning, there was also a steady stream of oncoming traffic rushing to work. Despite the adverse conditions, the 2014 Range Rover Sport drove like a beautifully balanced high performance sport sedan.

No hills were moved to build these roads; rather they are a series of corners strung together winding their way around the hills. Between corners, I was able to pull the steering wheel mounted shift paddle to claim a lower gear or two for engine braking or to quickly shift up. Sharper corners required stabbing the massive Brembo brakes to quickly scrub off speed. It was an intoxicating drive demanding intense attention. 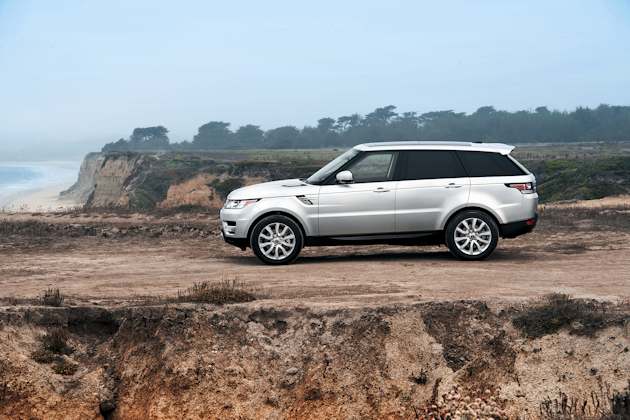 The improved agility and handling of the 2014 Range Rover Sport comes from the new high strength aluminum unibody construction and all-new front and rear suspension systems. The intensive use of aluminum in the unibody, body panels, suspension and engines combine to cut more than 800 pounds over the previous generation Sport.

The heart and soul of the 2014 Range Rover Sport are supercharged engines, a smooth eight-speed automatic transmission and the permanent four-wheel drive system. The big gun of the engines is latest generation 5.0-liter supercharged V-8. Rated at 510 horsepower it is capable of powering the Sport from 0 to 60 mph in a mere 5.0 seconds and has a governed top speed of 155 mph. The EPA fuel economy rating is 14 mpg city and 19 mpg highway. However, the most visceral feature of the V-8 is its deep, rich exhaust note.

My favorite engine is the supercharged 3.0-liter V-6. It?s developed from the V-8 engine and is rated at 340 hp. Capable of a 6.9 second 0 to 60 mph run; the engine sounds almost as good as the V-8 and feels stronger than the naturally aspirated V-8 it replaces. The V-6 gets a fuel economy rating of 17 mpg city and 23 mpg highway.

Both engines have a new Stop/Start fuel saving technology that shuts off the engine at stoplights or longer pauses at stop signs to save fuel. This system is much smoother and quicker than most similar systems I?ve driven. 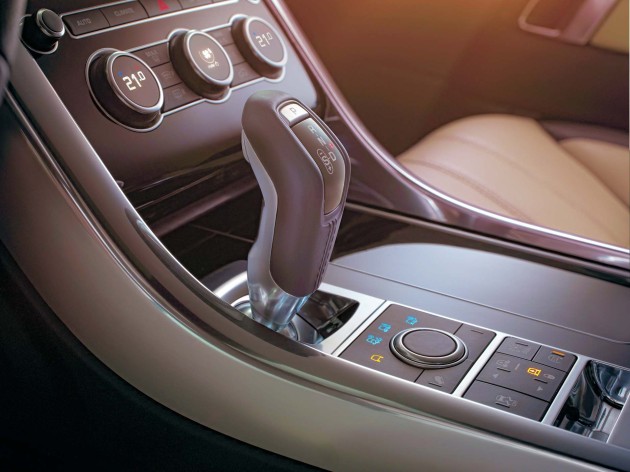 The eight-speed ZF transmission is brilliant with quick and positive shifts up or down. The V-8 comes with standard steering wheel-mounted paddle shifters, but they are an option on the V-6. The console-mounted transmission shifter is more pro-active than the dial used on the top level Range Rover. The Sport utilizes a conventional shifter with a button to put the transmission into Park and a gated shifter control for manual shifting.

Located to the rear of the console-mounted shifter is the Terrain Response? 2 system control. During spirited driving, the system sets up the vehicle up for a firmer ride, tighter body control, reduced roll and more responsive steering along with quicker throttle and transmission responses. With Terrain Response in the Dynamic mode, Active Lean Control is activated to keep the vehicle flat in corners, with Active Rear Locking Differential for better traction and Torque Vectoring to move power to the wheels with the best traction. The system is actually capable of controlling the front and rear suspension independently. 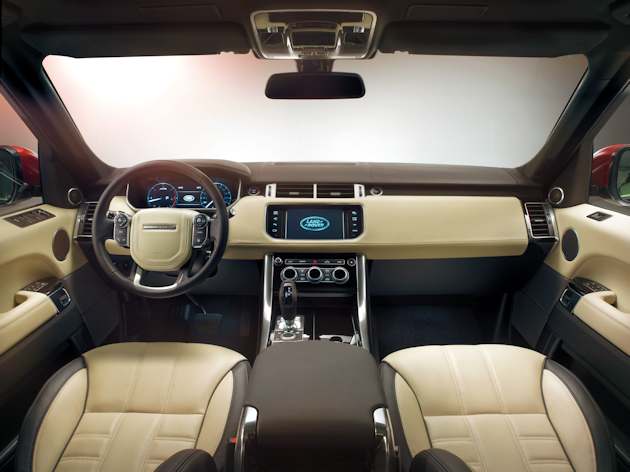 After the on-road drive, I was able to sample the Sport?s off-road abilities on a Santa Cruz mountain ranch, and it?s undoubtedly a Land Rover. I drove up and down steep hills through the redwoods on trails often covered with a couple of inches soft powdery soil. There were deep holes in the road and even a pond. The 2014 Range Rover Sport never hesitated, more than a slight slip of the tire before directing the power to the wheels with the best traction. It always amazes me to feel the Terrain Response doing its job.

The 2014 Range Rover Sport comes in four models: SE, HSE, Supercharged and Autobiography. The SE and HSE are both powered by the supercharged V-6 engine and have starting prices of $63,495 and $68,495 respectively, including the destination charge. The V-8-powered Sport Supercharged starts at $79,995 and the V-8-powred Autobiography is $93,295.

Each of the models is very well equipped, but the higher the model, the more extensive the equipment list. Some of the new safety features and driver aids are adaptive Xenon headlights, adaptive cruise control, blind spot warning, surround camera system and systems that detect front or rear traffic.

The plush 2014 Range Rover Sport seating is classified as a 5+2 with a third row for occasional use. When the occasional seating is not needed, it hides quickly under the floor so it doesn?t take up cargo space. 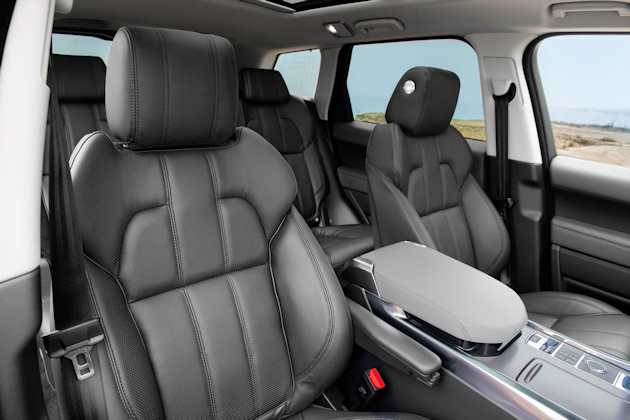 Base models have standard analog style instruments with a five-inch display screen in the middle for messages and indicators. Upper level models have a new 12.3-inch high-resolution display, which looks three-dimensional. The display changes when different drive modes are selected to provide more information for the driver. There is also an eight-inch high-resolution touchscreen on the center stack for the navigation system, audio and other functions.

My fantasy has always been to have a variety of vehicles for different types of driving ? for example a sports car, a sport sedan and an SUV or crossover type vehicle. The 2014 Range Rover Sport actually fills all my desires with only one vehicle. It drives like a sports car, carries up to seven people and handles any kind of roads and weather with ease. I can?t think of another vehicle that does so much, and so well. It?s not perfect, but it?s darn close. 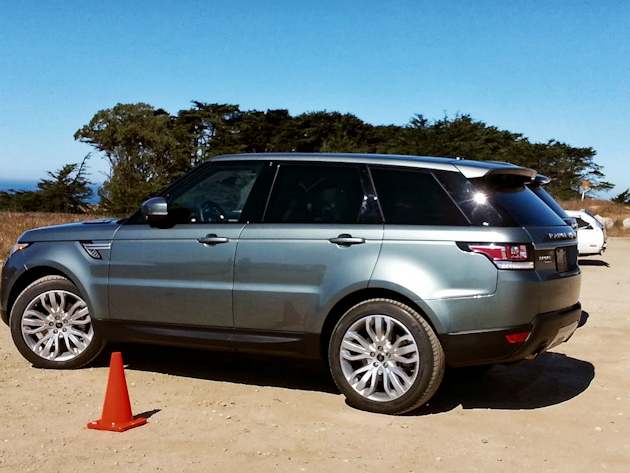 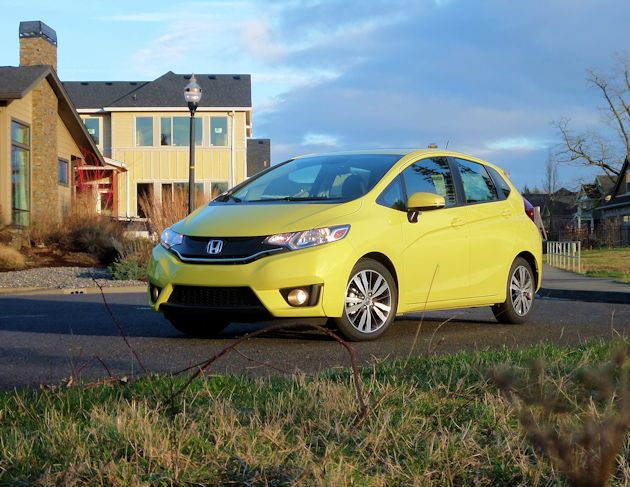 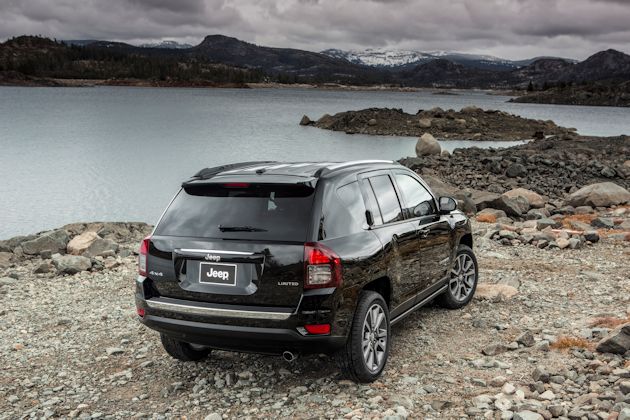