On recent trip to visit Bill?s family in Montana, we discovered that most of them had become Ram Truck owners. Because we only get to Montana about once a year, we don?t know exactly when this change occurred, but we remember Fords and a GMC in the mix before. Now almost everyone drives Ram Trucks? although one nephew still drives a Ford.

The point is, Ram trucks have become a big deal in our family, and they are becoming a very big deal in the U.S. market with sales continuing to climb. In 2013, there were 355,673 Ram trucks sold making it the fifth largest selling vehicle in the U.S.

Ram has also been a big winner in the awards circuit too, finishing as the Motor Trend Truck of the Year (2013 and 2014), 2014 Truck of Texas?, North American Truck of the Year 2014 along with several other major awards. 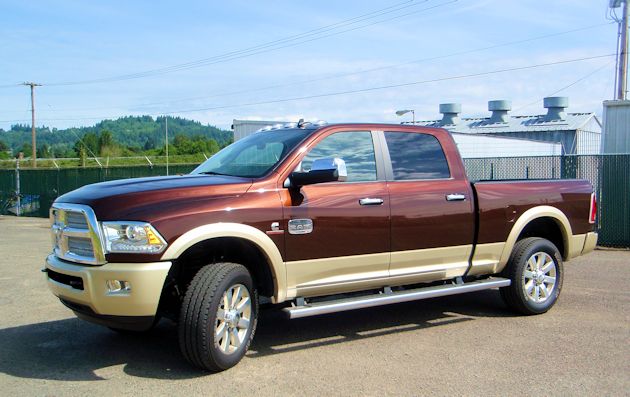 We recently arranged to drive a couple of different 2014 Ram trucks to get a sense of their growing popularity. First we drove the 2014 Ram 2500 Laramie Longhorn Crew Cab 4×4 with Cummins diesel engine. The name alone is a mouthful, but once we spent some time in this big heavy duty truck cab, we were in awe of the posh environment, western d?cor and diesel power. Then we drove the new lighter-duty Ram 1500 with its impressive new Eco-friendly diesel engine. 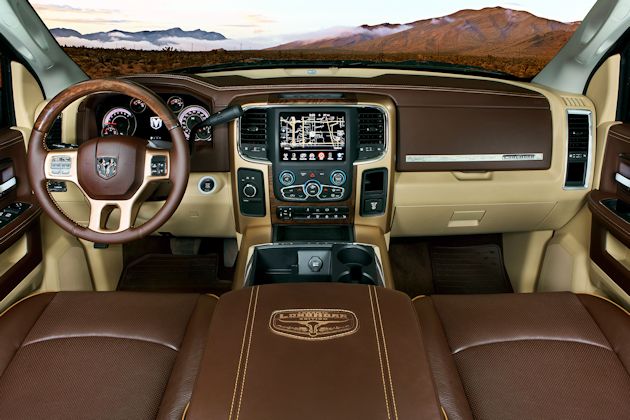 Truck buying can be an extremely complex process when you start to compare the options, capacities, sizes and trim levels. Ram trucks come in two- or four-wheel drive, with three cab styles, three pickup box lengths (plus Chassis Cabs) and up to ten trim levels for some models. Add in the engine, transmission, suspension, axle ratios and the long lists of comfort, convenience and available packages along with dozens of color choices and there are about a gazillion possible combinations. 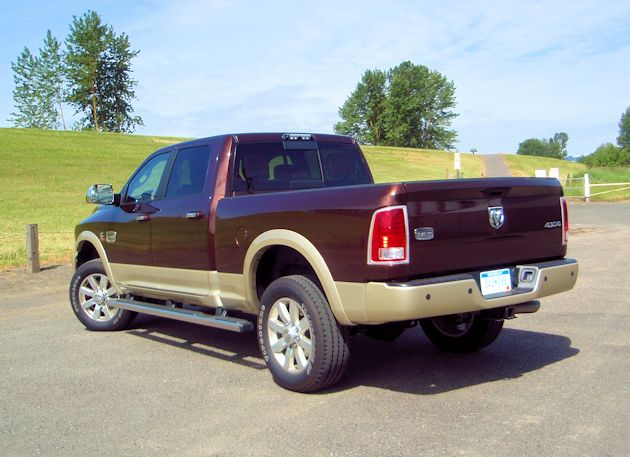 For 2014, the heavy duty Ram trucks have increased the potential maximum towing capacity to 30,000 pounds and added a new 410-hp 6.4-liter Hemi? V-8 engine. The big Hemi not only produces best in class horsepower and torque (429-lb.ft.) it also has a fuel saving cylinder deactivation system that improves fuel economy.

The Ram 2500 we drove was equipped with the optional ($7,995) 6.7-liter Cummins Turbo Diesel with Exhaust Brake. The legendary engine produces 370 horsepower and 800-lb.ft. of torque at only 1,600 rpms. The transmission is a smooth strong six-speed automatic. The truck has a towing capacity of 16,870 pounds using a goose neck fifth wheel hitch.

An optional feature on this 2500 truck was the rear air suspension with auto leveling system that keeps the truck flat at all times so it doesn?t sink in the rear when loaded with cargo or pulling a trailer. 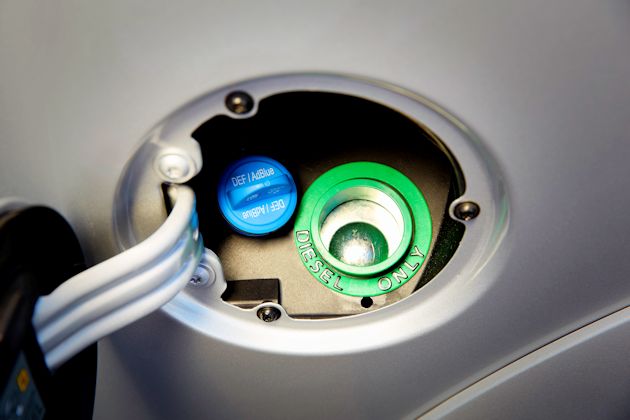 The Cummins engine uses a diesel exhaust fluid (DEF) that is injected into the exhaust to reduce NOx (Nitrogen Oxides) emissions coming out of the tail pipe. Unlike some competitor?s systems, the Ram Heavy Duty maintains full power even when fluid is low. The DEF is held in a 5.7 gallon tank that is conveniently accessed at the fuel door.

As impressive as the engine and drivetrain might be, it?s the interior that really adds bling. Our Longhorn model test truck had the beautiful and very comfortable black and cattle tan premium leather seats. The Western theme interior was adorned with leather Longhorn badges, wood and leather heated steering wheel, contrasting black piping on the seats, barbwire design floor mats and even saddlebag-like covers on the backs of the front seat as storage compartments. 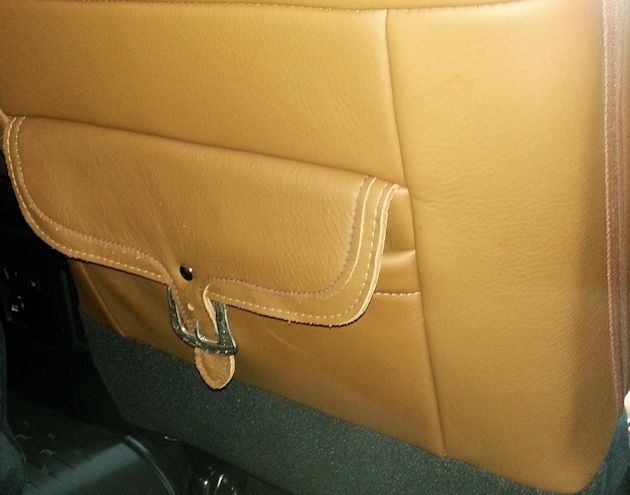 The Ram was equipped with many of the latest technologies, even though the design was reminiscent of the old west. We think the Ram?s Uconnect? navigation and audio system is one of the industry?s best. With its large user-friendly 8.4-inch screen and extensive services like TravelLink?, Sirius XM Traffic ? and even a Wi-Fi media hub, the system provides state of the art connectivity and entertainment.

Ram 2500 model truck pricing ranges from $31,310 for a two-wheel drive Tradesman with regular cab to as high as $67,875 for the full-loaded Laramie Longhorn Crew Cab 4×4 with the Cummins Diesel engine.

We usually prefer smaller vehicles, but were impressed by how drivable the 2014 Ram Crew Cab is. Steering is precise and brakes are strong, but they have a big load to stop. For a tall truck, it?s even easy to get up into with the full-length running board. The running board extends from wheel well to wheel well providing easy access to the cabin and the front of the cargo bed. 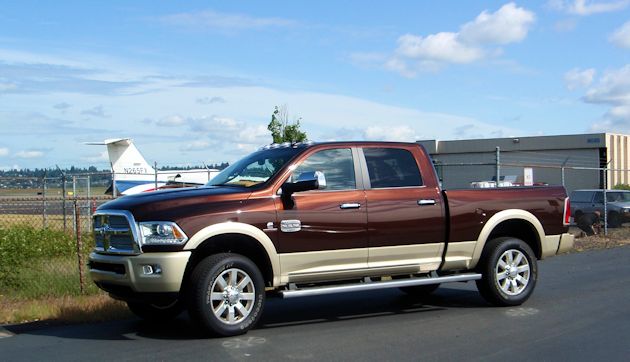 Driving the Ram is comfortable and extremely quiet, with virtually no diesel sound entering the cabin. The ride quality is excellent and handling is good for such a large vehicle. If we had a big boat, trailer, or had horses to haul, this would certainly be at the top of our shopping list.

A couple of weeks later we had a chance to get into the 2014 Ram 1500 Big Horn Crew Cab 4×4 with the new light-duty diesel engine. This engine puts Ram even more into a leadership position and at the top fuel economy for the full-size truck segment. 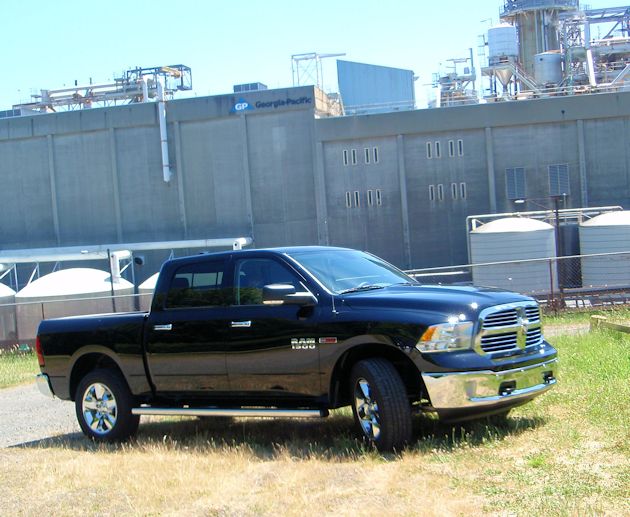 The 3.0-liter V-6 EcoDiesel engine was developed and manufactured by VM Motori (a Chrysler supplier since 1992). It is one of the most advanced diesel engines in themarketplace and includes a diesel oxidation catalyst, diesel particulate filter, and selective catalytic reduction — it is emissions-compliant in all 50 states.?The diesel engine is a $4,000 option and ends up costing $2,850 over the price of a similarly equipped Hemi? V-8 powered model.

The 240-horsepower engine is rated at 420-lb.ft. of torque and is mated with Ram?s TorqueFlite transmission which is the Ram adaptation of the ZF eight-speed automatic transmission. The transmission is controlled by a large round knob mounted on the dash to the right of the steering wheel. Gear changes can be made manually by using two buttons mounted on the face of the steering wheel. We think it?s one of the best transmissions in the business and is being used now by a large number of manufacturers worldwide and in many of the latest Chrysler, Dodge and Jeep models. The combination diesel and eight-speed automatic transmission gets an EPA rating of 19 mpg city, 27 mpg highway and 22 mpg combined. In mixed driving for a week, we averaged 25.6 mpg, beating the combined EPA number by over three miles per gallon. The diesel powered Ram has a 9,200-pound towing capacity. 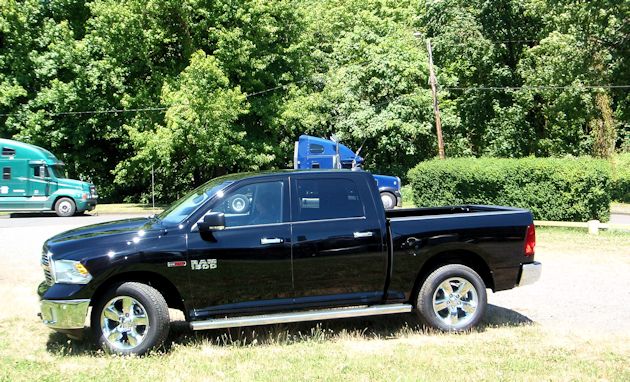 Like the 2500, the Ram 1500 is available in what seems like an infinite number of possible combinations. The Crew Cab we drove is offered in 10 different trim levels ranging in price from $26,005 for the regular cab, two-wheel drive Tradesman model, which is generally used for a work truck. The top model the Laramie? Limited with a base price of $49,875 and tops out at $53,615 with all the option boxes checked. 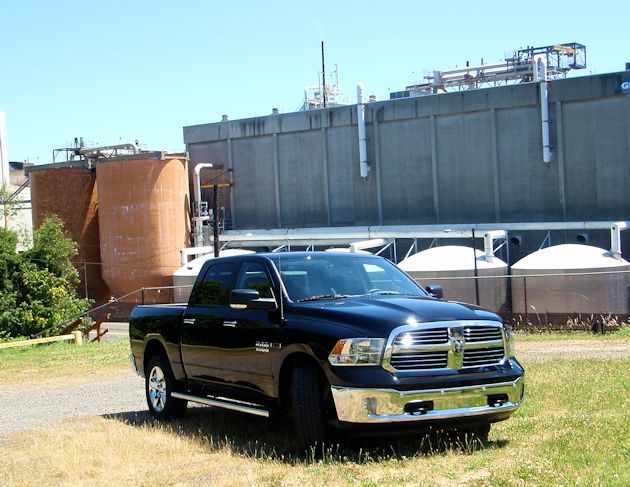 This is a perfect truck for someone that uses their truck as an everyday driver and occasional tow truck for a boat, camper or smaller horse trailer. It has lots of power, but the fuel economy is easier to live with. We were amazed by how quiet and smooth this truck is. The only time we could tell it was a diesel was when we first started it or when idling at the mailbox.

Speaking of starting; there are no rituals of allowing the glow plugs to heat up when starting this engine. Simply turn the key to the start position and let off?in a few seconds when the plugs are properly heated, the engine starts.

Like most of the trucks, the Ram 1500 has a good selection of driver aids like parking cameras and sensors, remote start and the Uconnect communications and infotainment system. 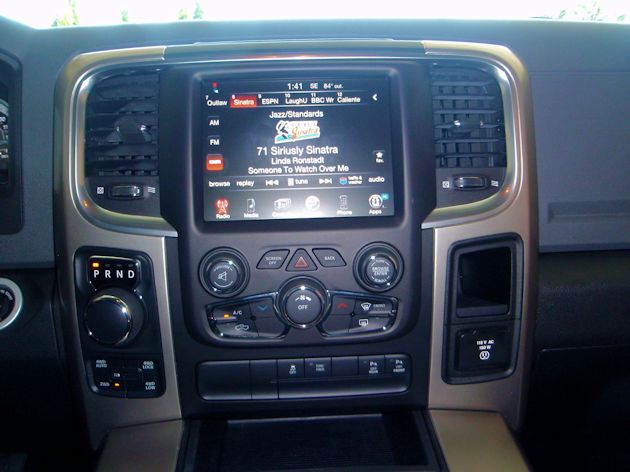 What we didn?t find on the 2014 Ram trucks were some of the important new safety technologies like blind spot warning, automatic cruise control and lane departure warning.

It wasn’t too many years ago that we thought the massive grille on the Ram trucks was excessive, but now it looks small compared to the Ford and General Motors offerings. The new Ram looks good inside and out, and the interior is even one of the Ward?s 10 Best Interiors. 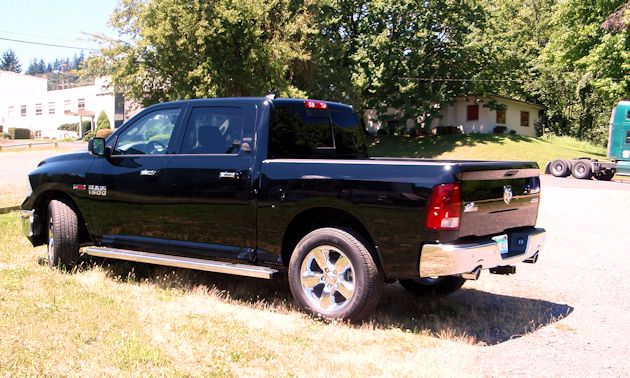 Ram backs up all its powertrains with a five-year /100,000-mile Powertrain Limited Warranty. The powertrain-limited warranty covers the cost of all parts and labor needed to repair a covered powertrain component ? engine, transmission and drive system and includes free towing to the nearest Ram dealer, if necessary. 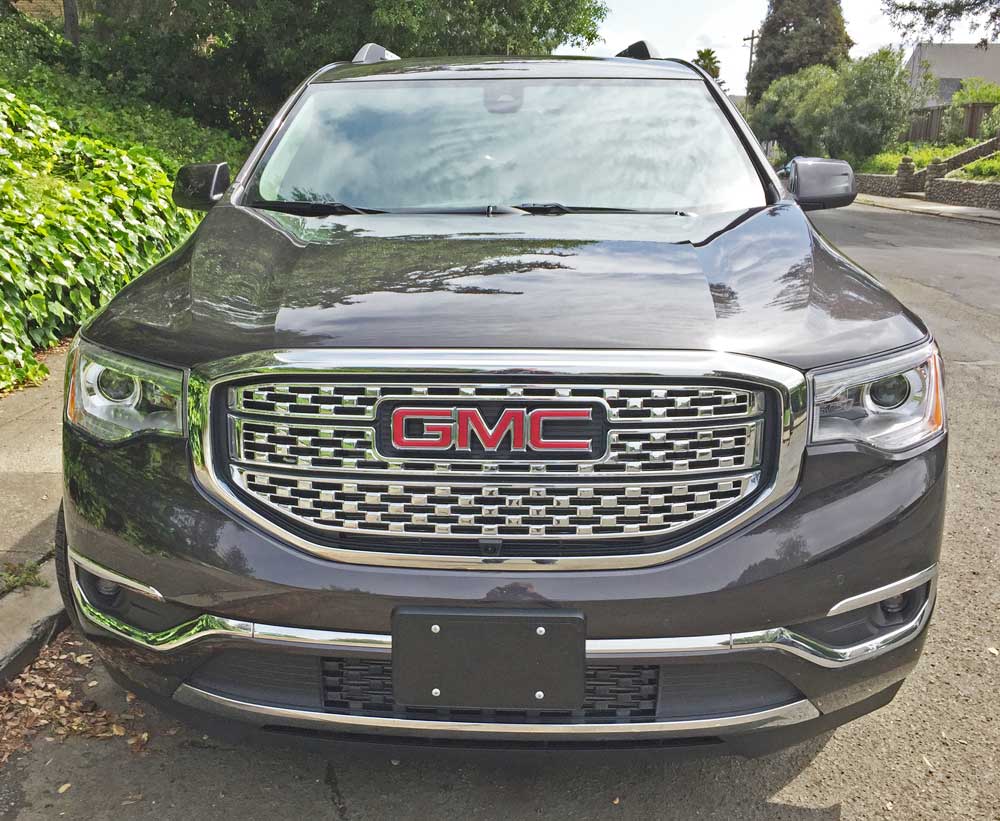