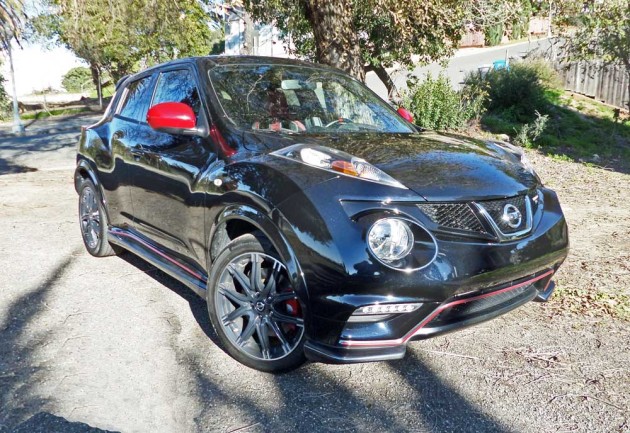 Nissan introduced a new and uniquely designed sport cross vehicle in 2011, inspired by the Nissan Qazana concept car that was shown earlier at the 2009 Geneva Motor Show. The hugely popular Qazana drew upon a number of lifestyle activities including motorcycles and rally cars. The Nissan JUKE is a four-door, five passenger, sporty crossover that?s based on Nissan?s B-platform, competing with other traditional B-segment hatchbacks. We will review here the Nissan JUKE NISMO RS, which is the fifth and leanest, meanest member of Nissan?s JUKE lineup, that comes complete from the factory with more horsepower, crisper handling, enhanced braking and a bolder attitude than any JUKE predecessor. 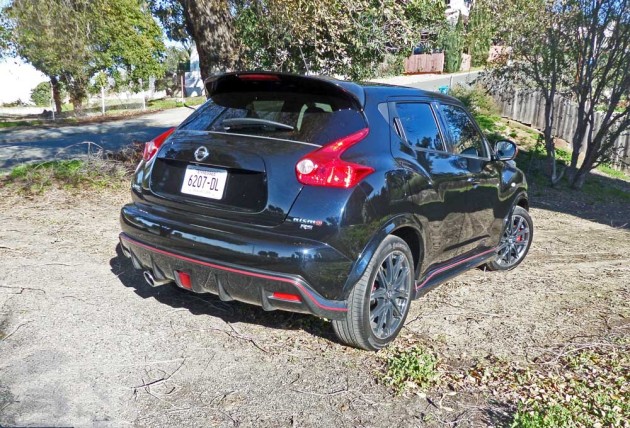 The JUKE name comes from the sports term ?to juke? or to catch one?s opponent off-guard, enhancing one?s personal competitive advantage. JUKE definitely does that with a vengeance ? it is bold and athletic in its appearance, while combining the best qualities of a sporty sedan and an SUV, blending them in an innovative design form that delivers efficiency and driving fun in an affordable package. 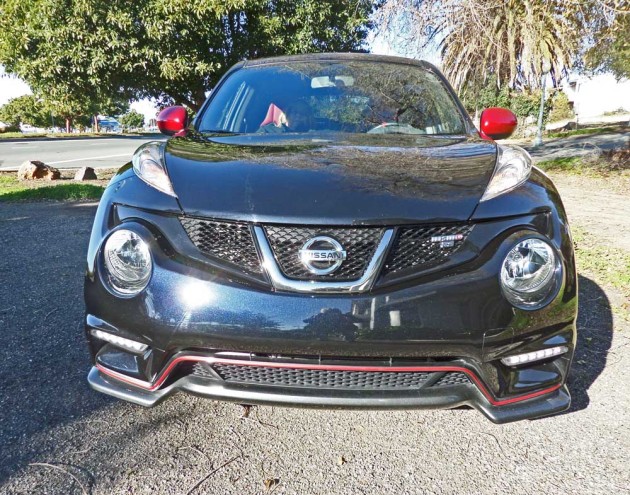 The 2014 Nissan JUKE NISMO RS continues to display a basically conventional styling approach until you look at the front end ? there, the conventionality ends. Its raised directional signals rest atop the fenders in a fashion reminiscent of the now defunct Pontiac Aztec, and what initially appears to be grossly oversized fog lamps that are placed low in front, flanking the traditional Nissan trapezoidal grille, actually happen to be the headlights. The actual fog lamps are recessed deeply into the leading lower diffuser, almost hidden from view. The Juke?s profile gives off an almost coupe-like image with its blacked-out ?B? pillar and rearward sloping roofline. The rear door handles are integrated into the leading edge of the ?C? pillar ? also blacked out. Wheel wells are emphatically pronounced by large fender-like bulges that blend gracefully into the front and rear fascias respectively. The rear hatch with its upper spoiler lip rakes aft to a blunt extrusion and short overhang is flanked by ?boomerang? style taillamps influenced by the 370Z, while delivering a somewhat Volvo-like approach. 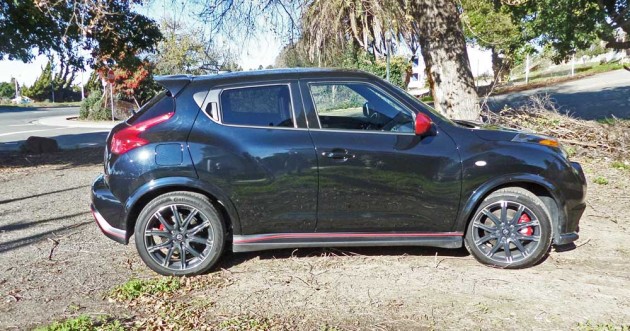 The interior provides a high shift point in the center console, placed within what resembles a motorcycle tank mounted console. Seating is both comfortable and supportive with the second row split into a 60/40 configuration that folds flat to provide a large cargo floor, adding to Juke?s versatility and functionality.

The 2014 Nissan JUKE NISMO RS serves up a unique style in an attainable performance package born from motorsports. It is the newest addition to Nissan?s NISMO lineup, kicking off a new strategy to expand NISMO?s presence in key markets. The Juke NISMO comes with a race-inspired interior that delivers improved aerodynamic performance along with a NISMO-tuned steering and transmission aiding drivers in engaging enhanced driving dynamics. The NISMO vision and name is derived from NISsan MOtorsports. The NISMO performance group draws upon nearly 50 years of engineering and racing experience in the development of NISMO models.

When compared to the standard Nissan JUKE, the most obvious visual change is to the front fascia and grille, modified to better control airflow to the engine. The new front end features a lower and more aggressive design. Juke?s familiar integrated fog lights have been replaced by thin-strip LED accent lights, placed at the top edge of new small vents to the side of the lower mesh grille. On front-wheel drive versions these are blanked, but on all-wheel drive models the left-hand side vent allows air into the engine bay for the CVT oil cooler with the right-hand vent is styled to match.

The prominent upper edge of the large lower grille sports a red pinstripe, which drops dramatically to curve around the smaller vents, continuing all the way to the front wheel arches. This distinctive NISMO cue gives the nose a visual width and presence while emphasizing the Juke NISMO’s athletic road stance. The signature Nissan V-strut grille is finished in a darker shade than other JUKE models. To the right of the grille is a NISMO badge with a red “O,” stamping NISMO’s distinctive motorsport heritage on JUKE. The distinctive JUKE combination lights are smoked as part of the NISMO appearance treatment.

The red pinstripe continues on the flanks of the car at the base of the doors just above the sculpted side skirts, which were reworked enhancing aerodynamic performance and directing airflow around the rear wheels and away from the car as quickly and efficiently as possible. Increasing the JUKE NISMO’s visual stance, the wheel arches are now finished entirely in the body color and are more muscular. Door mirror caps are red giving a visual indication that this is not a standard Nissan JUKE. The B-pillars are now finished in gloss “piano black,” also contributing to the sleek and sporty image. The lower front and rear fascias are finished in an anthracite tone along with the lower side skirts. 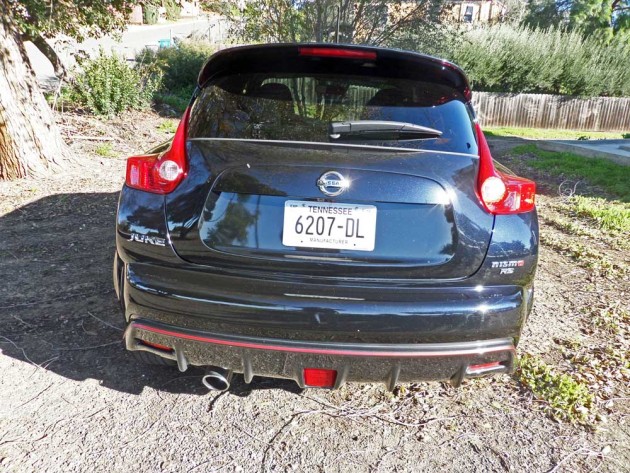 Out back, the bumper is deeper than on non-NISMO models and the red pinstripe also appears on the black sill. A redesigned body-colored liftgate spoiler and rear fascia diffuser complete the body modifications.
The new 18-inch lightweight aluminum-alloy diamond-cut alloy wheels feature a 10 twin-spoke design finished in dark anthracite, and are shod with 225/45R18 Continental ContiSportContact5 summer tires, which provide additional grip during cornering. The wheels are one-inch larger than the standard JUKE wheels. The 2014 Nissan JUKE NISMO RS is available in three exterior colors ? Sapphire Black, Brilliant Silver and Pearl White. 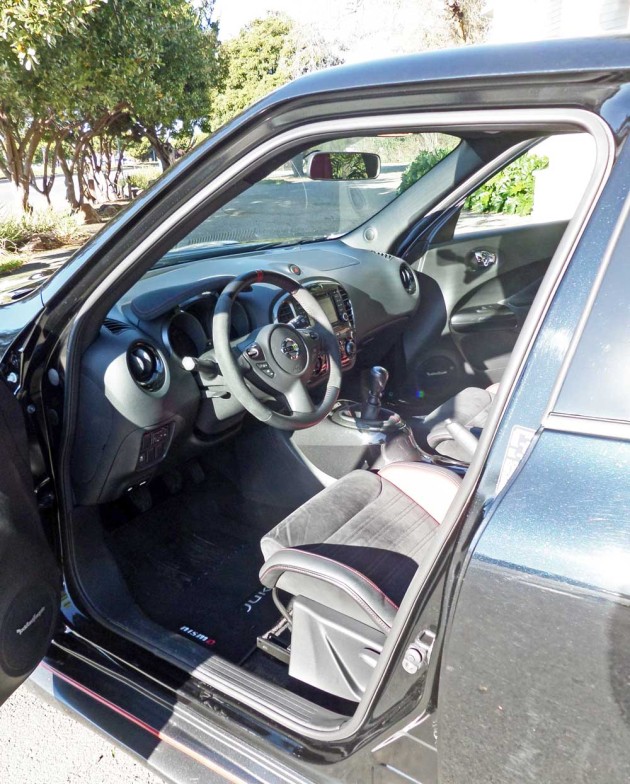 Inside, the JUKE NISMO RS’s seats, instrumentation, steering wheel, gear knob, pedals and door trims have all been redesigned to boost driver enjoyment by creating a more performance-oriented environment. The Recaro front seats were redesigned providing additional lateral support. Trimmed in suede, they feature vibrant red insert panels and stitching. Red is also used as a background to the tachometer and also appears on the steering wheel stitching, which is finished in Alcantara and leather. The three-spoke steering wheel now includes a red marker to indicate “top dead center,” another feature derived directly from racing. Rear seats also feature red stitching. 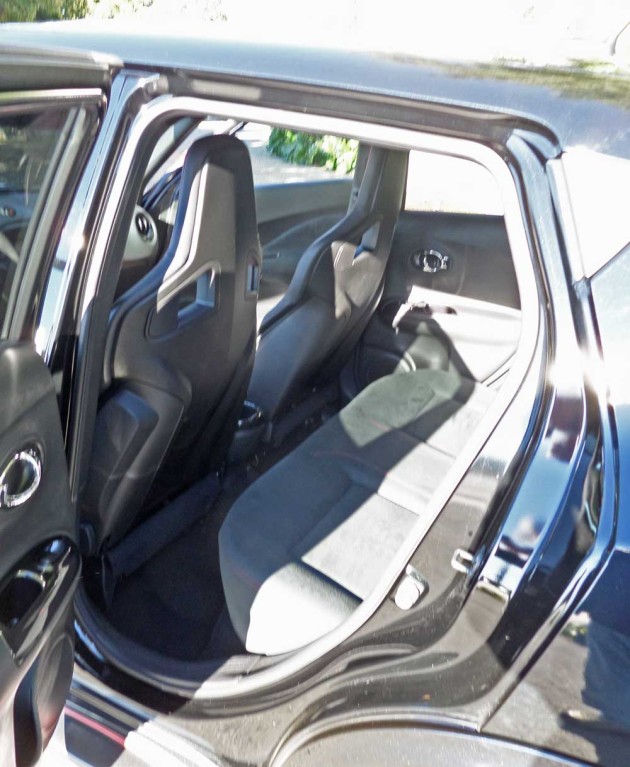 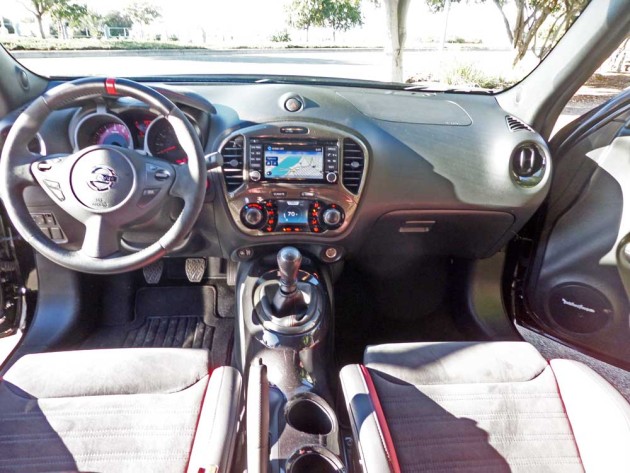 In the footwell, standard black rubber pedals are upgraded to a metallic finish, with a NISMO badge visible on the dead pedal. The NISMO logo has also been precision-stitched into the seatbacks.
In the powertrain department, both power and torque have been increased without compromising emissions and efficiency for use in the JUKE NISMO RS, which is rated at 215 horsepower and 210 lb-ft of torque. The 1.6-liter, DOHC, 16-valve aluminum- alloy inline 4-cylinder, turbocharged engine with intercooler and sequential Direct Injection Gasoline (DIG) and single NISMO RS tuned exhaust is positioned forward in a transverse orientation, driving either the front wheels or all four wheels via Nissan?s torque-vectoring AWD system. The front-wheel drive JUKE NISMO is equipped with a 6-speed manual transmission that features three boost modes: Normal; Sport and Eco, while the all-wheel drive version comes with a sport-tuned version of Nissan’s advanced Xtronic CVT? (Continuously Variable Transmission) with manual mode. 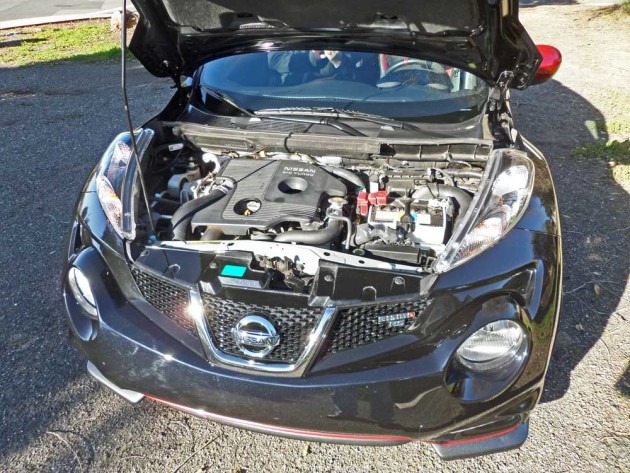 Suspension componentry consists of independent MacPherson struts up front with a 23mm stabilizer bar, and a torsion beam (FWD) and a multi-link (AWD) setup in the rear, with a 21.7 mm stabilizer bar. Both front and rear feature KYB twin-tube, NISMO RS-tuned shock absorbers. 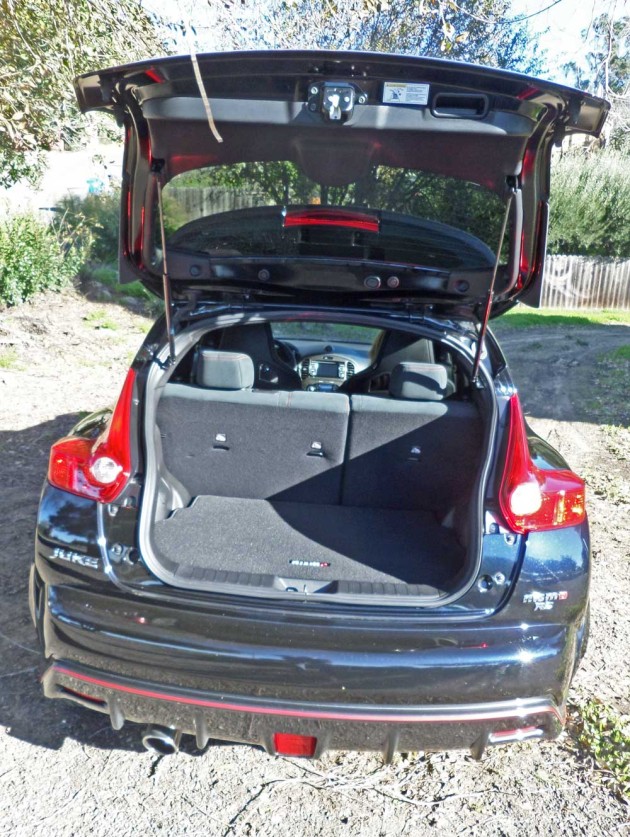 The Electric Power-assist Steering has been retuned for the NISMO RS, and the braking system includes 4-wheel vented discs, larger brake rotors in front (12.6 inches versus 11.7 inches), vented rotors in the rear (versus non-vented in non-RS models), red-painted calipers and upgraded brake pads.

My test 2014 Nissan JUKE NISMO RS sportcross sported a Sapphire Black exterior and came with a base sticker of $26,120. Adding the NISMO carpeted floor and cargo mats, the Navigation Package and Destination charge bumped the final price tag to $28,345.

SUMMARY: The 2014 Nissan JUKE NISMO RS provides a breath of fresh air in both its styling (which tends to grow on you after awhile) and in performance. The NISMO?s enhanced, turbocharged 1.6-liter motor delivers plenty of punch for a four-banger, and the 6-speed manual gearbox delivers a high fun factor. The boost modes appear in the IP on an alternate screen with the climate control and actually provide three very different levels of acceleration.

Handling characteristics are spot on, and the ride quality, though firm and planted is not uncomfortable. The 2014 JUKE NISMO RS is sure to attract sports oriented consumers of either gender who enjoy spirited driving characteristics in a well-equipped, high performance, yet affordable and value-laden package. The Recaro front sport seats are highly supportive one situated, but entry over the firm seat cushion bolsters can be a bit challenging. 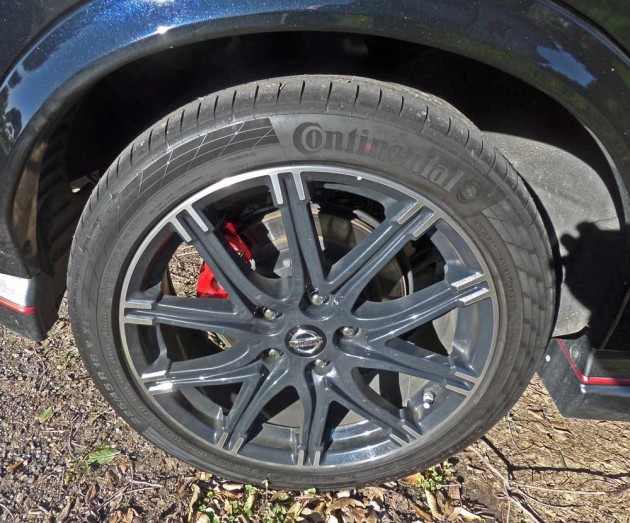 Admittedly, the JUKE NISMO?s unusual design won?t appeal to everyone?s taste, but for those looking for a fun-to-drive ride that won?t break the bank, checking out the NISMO RS version JUKE is a must. It is built on Nissan?s proven global ?B? platform with added structural body reinforcements. 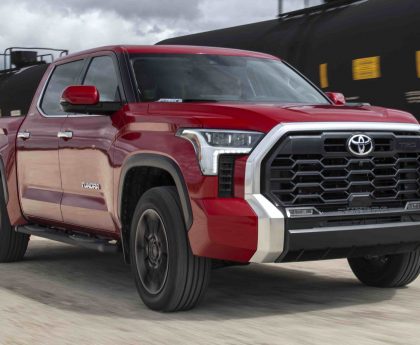 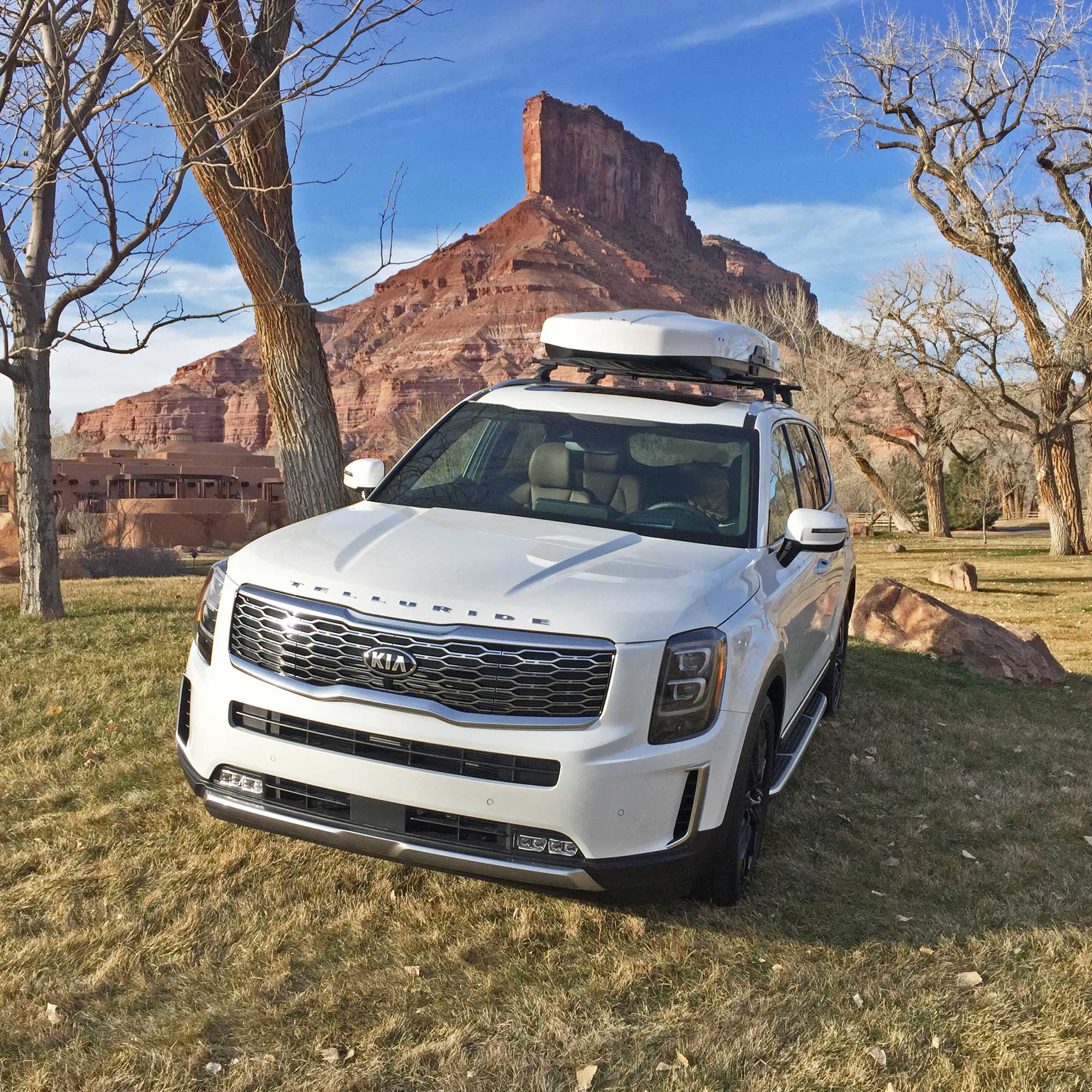