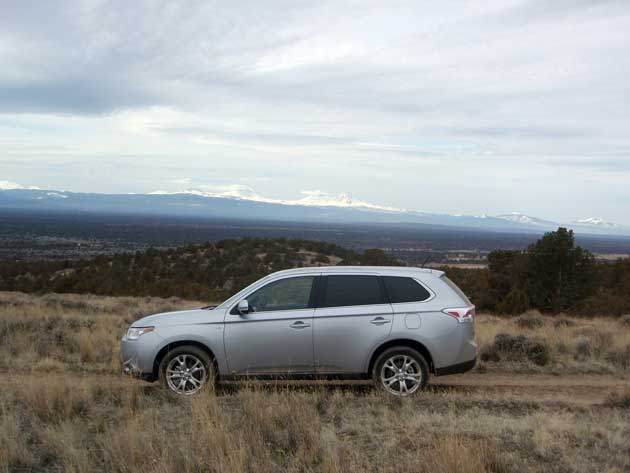 Powell Butte, Ore. ? I had not been back to the old neighborhood in years, so when Mitsubishi said they would be introducing the all-new 2014 Mitsubishi Outlander at the Brasada Ranch in Central Oregon I told my husband Bill, ?this introduction is mine.? We write about cars together and when we can?t both go to a new car introduction, we split up the travel.

For the last seven or eight years the Brasada Ranch resort http://www.brasada.com/?has been under construction on the western slope of the Powell Buttes. About 20 years ago, we built a new house just a few miles north of the ranch site on the northern slope of the buttes. 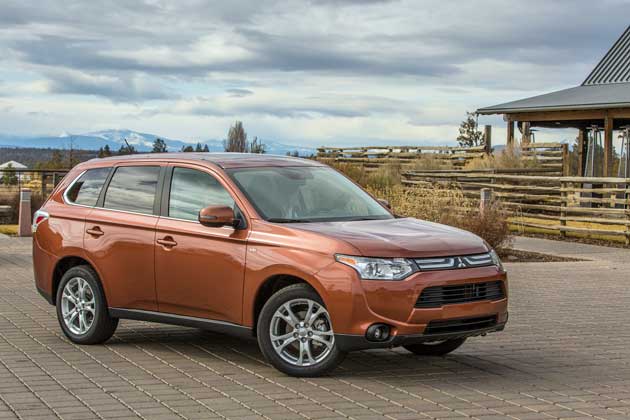 It was fun to get to see all the changes in the area and especially the luxurious Brasada Ranch, which is built to look like upscale barns and cabins. Although around the golf course area the million-dollar houses look nothing like barns. The ranch is very luxurious and has one of the most magnificent views of the snow-capped Cascade Range volcanic peaks that you?ll find. It was also a perfect place for Mitsubishi to show off the 2014 Mitsubishi Outlander. 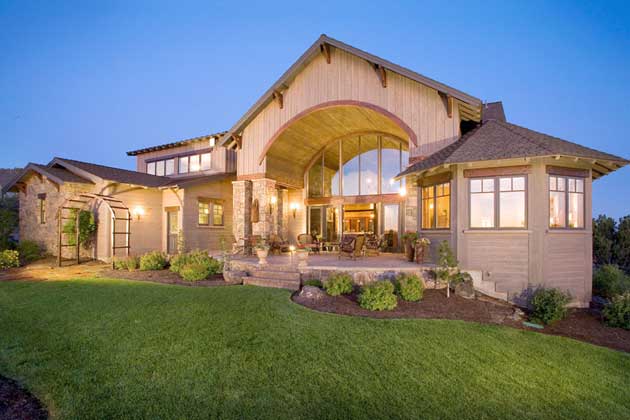 Mitsubishi is on a comeback having struggled with sales and limited products over the last few years. This new Outlander goes a long way to showing the company is serious about producing the kind of vehicles American consumers are demanding.

Now in the third generation the 2014 Mitsubishi Outlander takes a totally new complexion starting with a horizontal grille and fascia, which makes it look wider and lower. The sides have a more pronounced belt line with more character lines with less emphasis wheel arches. The result is a more sophisticated look.

The rear gate has interesting treatment tying the taillights together with a chrome bar that extends across the panel just below the rear window. The rear gate is powered on the two upper level models. The new styling achieves a low 0.33 coefficient of drag and a net weight reduction of 220 pounds. The Outlander is just a few inches longer than the Toyota RAV4 and Honda CR-V. 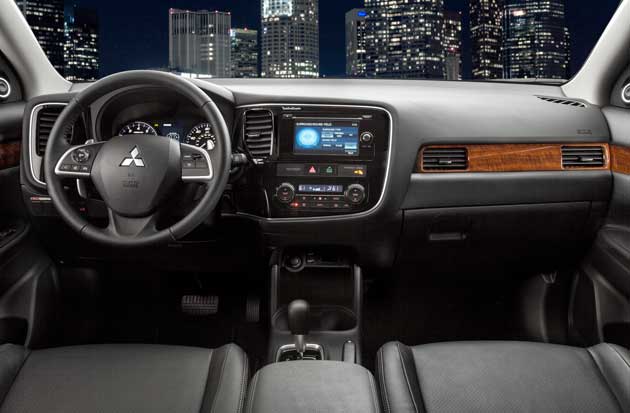 Inside, Outlander has matured with driver-oriented cockpit equipped with easily recognizable and user-friendly controls. The monochromatic d?cor is accented with a tasteful placement of britework and attractive natural looking faux wood trim on the dash and door panels. The 2014 Mitsubishi Outlander has a three-row configuration with seating for seven. As with most three row vehicles, the ?way back? row is best reserved for the smallest and most agile passengers. The Outlander has 10.3 cubic feet of cargo space even with all the seats in use. With the third row folded space expands to 34.2 cubic feet and with both rear rows folded flat, the cargo space mushrooms to 63.3 cubic feet. 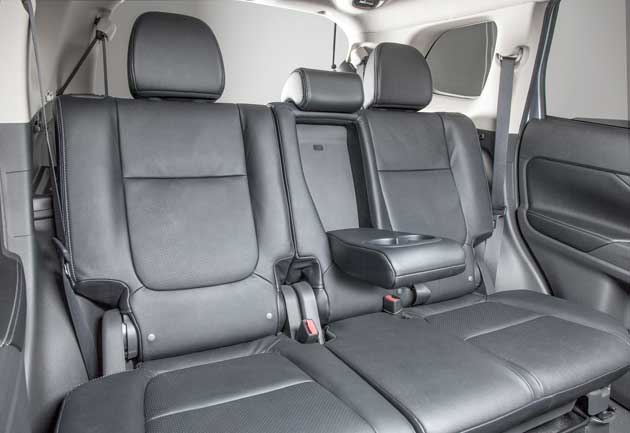 Outlander comes in three trim levels, ES, SE and GT. The first two trims have a 166-hp, 2.4-liter four-cylinder engine under the hood. The engines use the latest version of Mitsubishi Innovative Valve-timing Electronic Control (MIVEC) variable valve-lift system for maximum power production and fuel efficiency as well as reduced exhaust emissions. The four-cylinder engine is mated to a continuously variable transmission driving the front wheels. 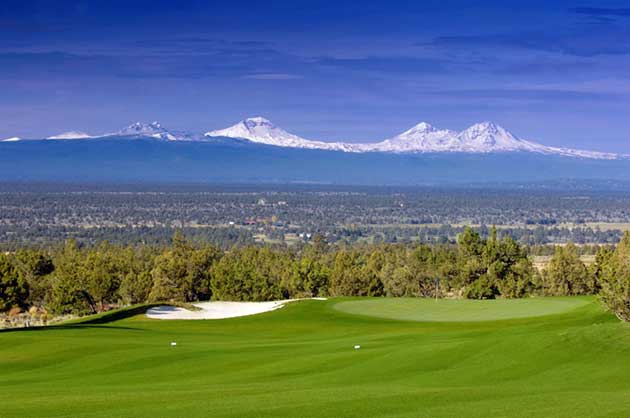 Optional on the SE and standard on the GT is Mitsubishi?s Super All-Wheel Control system (S-AWC), which was developed from the World Rally Championship racing. The system offers the driver four distinct driving modes: Eco, Normal, Snow and Lock for maximum traction. I wasn?t able to find any 0 to 60 mph acceleration times but would estimate something in the 9-second range. EPA fuel economy is rated at 25 mpg city and 31 mpg highway for the front drive models and a mile or two less with the AWC. This puts the Outlander near the top of the list of most fuel-efficient compact utility vehicles sold in North America.

The GT model gets the 224-hp, 3.0-liter V-6 engine, a six-speed automatic transmission, and the S-AWC. Fuel economy is listed at 20 mpg city and 28 mpg highway. I estimate 0 to 60 mph times in in the 7.5- to 8.5-second range. All three models are also equipped with a handy Hill Start Assist system that keeps it from rolling backward when the driver moves his or her foot from the brake to the accelerator.

Technology has become an important part of new vehicles and the 2014 Mitsubishi Outlander is well outfitted with available features like a navigation system with weather, fuel prices, rear view camera, Adaptive Cruise Control, Forward Collision Mitigation system, Lane Departure Warning system, super-wide beam HID headlights and a 710-Watt Rockford-Fosgate? sound system. One important safety feature for me, blind spot monitoring, is not available, but they did say they were ?working on it.?

I had a chance to sample the Forward Collision Mitigation system during a parking lot demonstration ? no I didn?t almost crash into another car while I was busy singing along to a Frank Sinatra tune on satellite radio. I drove the Outlander at about 12 miles per hour toward a fake ?wall.? As I neared the obstacle, the display and alarm went off warning me of the impending crash. The system also charged the brake system so it would operate faster. When I didn?t react quickly enough, the system intervened and slammed on the brakes so that I avoided crashing into the ?wall? ? I thought it was amazing! The system is designed to work in two modes: ?near? and ?far.? The Adaptive Cruise Control uses the same radar system to help the Outlander maintain a set distance behind a vehicle ahead. 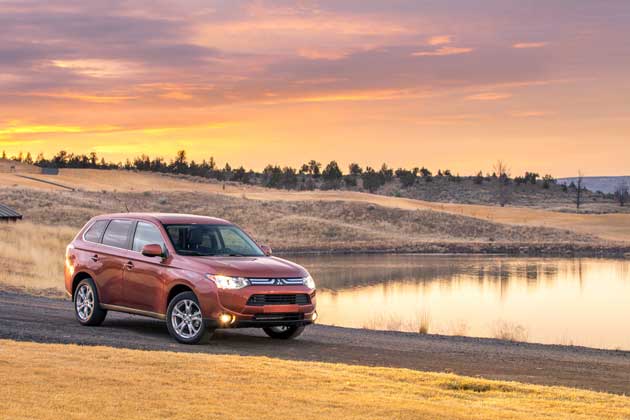 Driving both models on a variety of roads in Central Oregon the new Outlander had a quiet cabin and comfortable balance between ride and handling. I thought the four-cylinder engine did a great job, and didn?t think the V-6 engine offered that much advantage. I would rather see them drop the V-6 engine and use the 237-hp turbo four-cylinder engine from the Lancer Ralliart or maybe a diesel.

On the horizon for the Outlander is a Plug in Hybrid Electric (PHEV) version. It will arrive in 2014 as a 2015 model. The hybrid will have a twin motor four-wheel drive system with a range of more than 30 miles on the battery and it is expected to have a full charge time of 4.5 hours using a 200-volt, 15-amp charger. 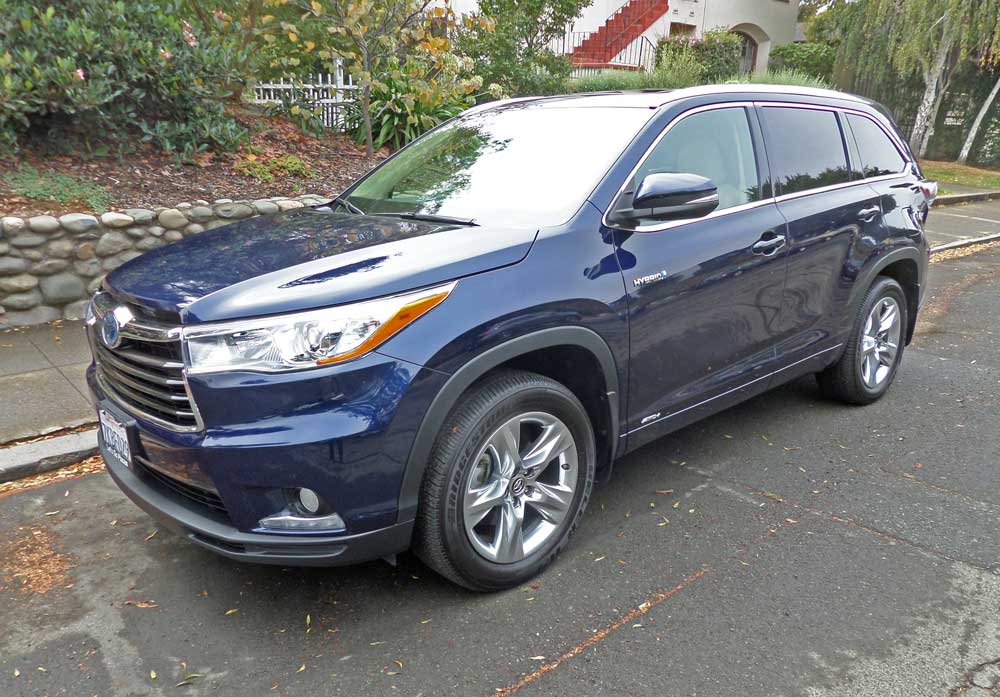 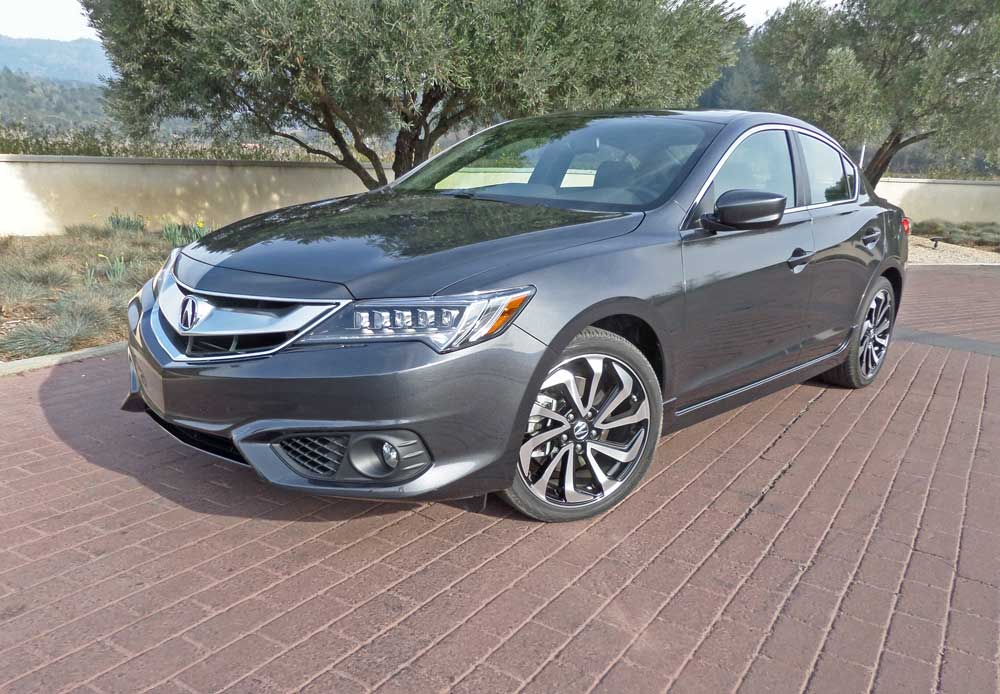