Portland, Ore. ? Mercedes-Benz has more models, variations and trims than any other automaker, and the model that brings the most cars to the list is the E-Class. You can buy a Mercedes-Benz E-Class sedan, coupe, convertible or wagon. It can be two-wheel drive or 4Matic (all-wheel drive). Engine choices run the gamut from four-cylinder diesel to hybrid to V-6 to biturbo V-8. Plus, each model has a broad range of options allowing for extensive customization.

It?s not often I get a chance to sample all these vehicles in one place over a two day period, but Mercedes brought them all together for the 2014 E-Class introduction on my home turf of Portland, Oregon. Well actually, I live across the Columbia River in Washington. The Mercedes-Benz staff gave us a little challenge as my driving partner and I pulled out of a downtown parking lot ? who can get the best fuel economy? The driving route actual went through my neighborhood driving up the Washington side of the Columbia River Gorge on Hwy 14. With towering cliffs, dense forests and spectacularly high waterfalls as the scenery, Highway 14 snakes by the massive Columbia River offering picture perfect pullouts along the way.

As we took turns driving, we both drove normally, at the posted speed limits. There were no attempts at hypermiling by pulling in the mirrors or shutting off the air conditioning. Arriving at the parking lot at the Mount Hood Winery for lunch, our trip computer indicated 42.2 mpg ? we were, at that time in second place, with most of the cars arriving ahead of us. That?s not too bad for a 4,400-pound all-wheel drive sedan ? in fact that?s great! At that time the EPA numbers had yet to be determined, they have since been posted at 28 mpg city and 45 mpg highway for the rear drive model and 27/42 mpg for the 4Matic. After lunch, we drove a bit more aggressively and discovered the E250 has a fun side, too. The engine is a 2.1-liter bi-turbo four-cylinder diesel. It?s rated at 195 horsepower with 369-lb.ft. of torque. That?s 94-ft.lbs . more torque than the V-6 engine. It makes quick passes and accelerates from 0 to 60 mph in 7.1 seconds ? that?s impressive. Handling is solid sport sedan quality plus it has a firm, comfortable ride.

Mercedes has always been a technology leader, but they appear to have been working overtime lately, especially on new safety features. Much of the new safety technology comes under the umbrella of what they refer to as Intelligent Drive. This is the most sophisticated safety system I?ve ever seen. It uses a stereo multi purpose camera, long distance radar, ultrasonic sensors, short-range radar, rear view and surround cameras and multi-mode radar to identify and react to potential safety problems all around the car.

These systems combine to help keep the driver out of trouble and will even go as far as turning the vehicle to keep it centered in the lane. Unlike many systems I?ve seen, this one works with pedestrians, too. It also watches for cross traffic. When the systems ?see? that a collision appears eminent, it activates measures to mitigate damage and injury or to prevent the collision from being compounded by knocking the car into other traffic.

The ?gee-whiz? technology even extends to LED headlights that turn with the vehicle and automated parking assist. Yes, other manufacturers have similar systems, but Mercedes has certainly refined theirs. Of course, there is no shortage of the creature comforts and entertainment technologies, either. The 2014 Mercedes-Benz E-Class sedan pricing starts at $52,325, including the destination charge, for the E250 BlueTEC two-wheel drive, the 4Matic all-wheel drive adds $2,500 ?with all the important options the price can flirt with $70,000. Day two, I drove the sexier side of Mercedes, the 2014 Mercedes-Benz E-550 Cabriolet, through the twisty narrow back roads leading through Oregon?s Coast Range to the Tillamook area on the coast.

Not challenged to seek high fuel economy this time, the drive was a top-down sprint to the coast through Oregon wine country and thick forests.

When I first got into the Mercedes-Benz E-550 Cabriolet, I held the top control button for 20 seconds and the top gracefully folded itself into the trunk. When the cover closed all that remained was an elegant cover with aerodynamic raised panels behind the rear seat headrests. A mesh screen between the rear headrests adjusts its height automatically based on the number of passengers it senses and helps keep wind from the cabin area. In the trunk there was still nearly nine cubic feet of cargo space. At speeds over 25 mph, with the top down, an AIRCAP automatically raises a few inches above the top of the windshield frame. The wing-like AIRCAP directs the wind-flow over the open cockpit creating a nearly wind free environment for both front and rear seat occupants. Even on cool days, the driver and the front seat passenger keep toasty with heated seats and the innovative Airscarf, which blows warm air at the back of their necks.

The Mercedes-Benz E-550 Cabriolet has the most rigid body structure I have ever experienced in a four-seat convertible. Generally, cars like this have a little perceptible body twist or cowl shake on rough roads, but this car was rock solid ? top up or top down.

The suspension is also outstanding with a three-link system in the front and five-link in the rear both controlled by a Dynamic continuously variable damping system. The result was that — tires seem glued to the road no matter how hard I pushed.

Under the hood of the Mercedes-Benz E-550 Cabriolet are 402 thundering horses a product of the 4.6-liter, twin turbo direct-injection V-8. Floor the throttle and the Cabriolet nearly jumps with 0 to 60 coming in just 4.9 seconds. Top down driving makes it easier to hear the amazing sounds produced by the engine. As quick as this car is it still gets a fuel economy rating of 17 mpg city and 26 mpg highway.

All the Mercedes E-Class cars get the excellent Mercedes seven-speed automatic transmission with steering wheel mounted paddle shifter. Pull a paddle and the transmission shifts up or down, with positive expedience. 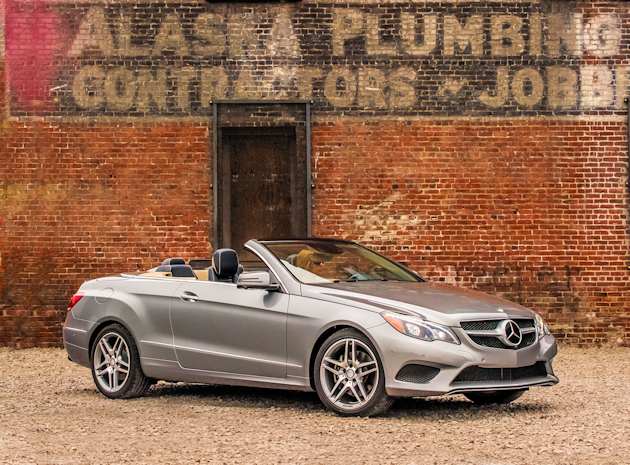 Both the E250 sedan and the E550 Cabriolet were amazing cars to drive, producing different visceral results, but with the precision and elegance I have come to expect when driving a Mercedes-Benz.

Unfortunately, time didn?t permit driving the Coupe and Wagon versions of the E-Class, but I hope to get into both of those later in the model year.