When an automaker skips a model year and brings out a new car with next year’s year on it, you know that they want to grab your attention. The 2014 Mazda6 is a substantial redesign of Mazda’s popular mid-size four-door sedan, and unlike most year-skippers, this car is so significant that it really deserves that extra year.

The new Mazda6 offers the full suite of Mazda’s SKYACTIV technology in a passenger car. SKYACTIV is a combination of improvements to the chassis, engine, body and drivetrain that combine to produce greatly enhanced fuel economy without sacrificing the performance you expect from a Mazda.

Mazda has been late to the alt-fuel game, eschewing the EVs and hybrids that other automakers have used to stay in the news. But the SKYACTIV program has delivered comparable improvements in fuel economy, and promises more to come. For example, one of Mazda’s new features is a 2.2-liter twin-turbo-diesel Mazda6 that is rated at 44 MPG on the highway. The diesel engine Mazda6 will be in showrooms later this year, but the car is already winning races in the Grand-Am series.

The main engine available in the 2014 Mazda6 is a turbocharged 2.5-liter DOHC 4-cylinder, producing 184 horsepower and 185 pound-feet of torque. Mated with the 6-Speed SKYACTIV manual transmission, that’s good for 25/37 MPG, and you get 38 MPG on the highway if you opt for the paddle-shifted 6-speed SKYACTIV automatic transmission. Those are excellent numbers for a C-platform sedan with a conventional engine. By comparison, the basic Toyota Camry hybrid offers 39 MPG highway, and the XLE Camry hybrid offers the same 38 highway MPG. Of course, the hybrids offer much better city MPG, so choose your car according to your driving habits.

The rest of the new Mazda6 is as expected. The interior is nicely put together with quality materials and sensible controls. Outside, the Mazda6 reflects Mazda?s current Kodo design philosophy, and it has the aggressively stylized looks of all Mazdas from the last 5 years or so. You won’t be disappointed with trunk space or legroom. About the only criticism I can make was the voice-activation on the navigation system. Maybe the car needed to train me to speak clearly, but it was consistently unable to understand simple requests. Picking the car up in San Jose, the navigation asked for my destination. I said “Monterey” and it responded with “Locating nearest opera.” As they say, a tiny little first-world problem.

I drove two variants of the car this month – a Grand Touring automatic on the road, and a manual-transmission entry-level Sport model at Mazda Raceway Laguna Seca. Both cars performed admirably. Either way, you get a sporty, quiet car that is fun to drive and loadable with optional features like backup camera, adaptive cruise control, blind spot radar, heated seats, and full electronics. At the track, the Mazda6 corners nicely and has plenty of power for enjoyable spirited driving. The car has no bad habits and plenty of evidence that the same people who gave us the Miata and the RX-8 have been at work on this sedan.

The best part of the Mazda6 is its price tag. The Sport model I drove on track has a sticker price of just $21,675, and that includes 17-inch alloy wheels, air, cruise, 4-wheel disc brakes, power everything, nice stereo with MP3 and Aux port, trip computer, push button start, and the list goes on. The Grand Touring version had leather, navigation, 19-inch wheels, HID lights, heated seats, rearview camera, blind spot radar, adaptive cruise, and much more for $31,490.

Bottom line – If you’re shopping Lexus, Acura, or Infiniti, take a look at the Mazda6 and save some money for track days.

Jeff Zurschmeide is a freelance writer from Portland, Oregon. Jeff covers new cars, motor sports, and technical topics for a variety of newspapers, magazines, and online outlets. Additionally, Jeff is the author of nine published books on automotive topics, including photo histories of Portland International Raceway and Portland Speedway. You can read Jeff's work here on Test Miles, in The Oregonian newspaper, and online at Digital Trends. 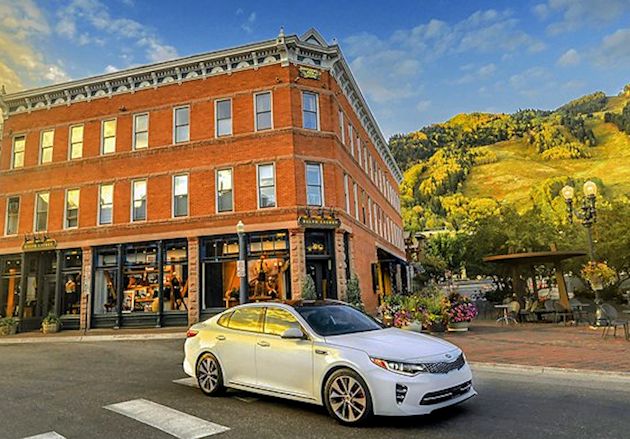