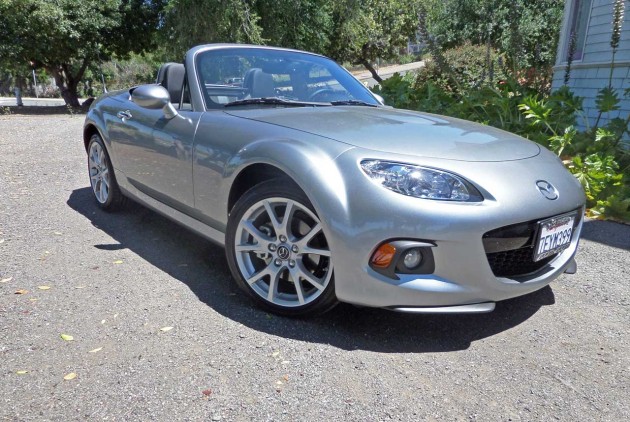 The Mazda MX-5 Miata, after more than 20 years, continues to, provide sports car enthusiasts with a pure and simple, fun-focused roadster at an affordable price. The experts at the Guiness Book of World Records, proclaim the MX-5 to be the most popular two-seat convertible sports car in the world, with more than 900,000 produced. Is Miata by any other designation still a Miata? Damn straight! The popular roadster is now referred to as the MX-5 and it literally revived open-air motoring on our shores, and now happens to be better than ever. Did it make sense to drop the Miata name reference that has built such positive brand equity? Probably not, but in the final analysis, true aficionados will still revert to using the Miata name when talking about the MX-5 anyway. 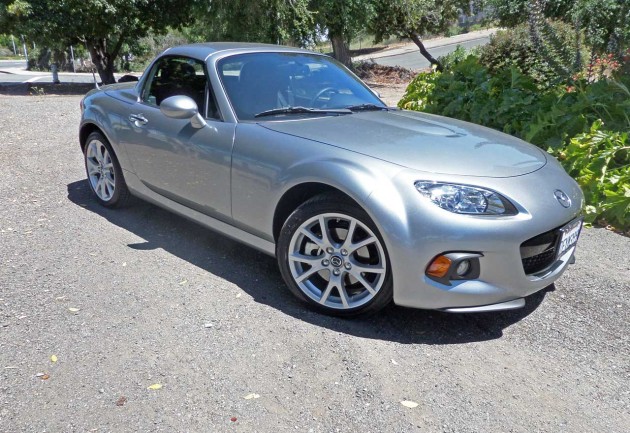 As if that weren?t enough, in 2008, Mazda took the concept of the two-seat roadster and advanced it to the next level of refinement by adding a Power Retractable Hardtop convertible design to its model offering. The MX-5 Power Retractable Hard Top (PRHT) features a roof consisting of three major parts?a front section, a middle section, and the rear window?which hinge and move to?nest atop one another in exactly the same space as the soft top. No trunk space?is sacrificed, and the top mechanism only adds 78 pounds over the cloth top model?s weight. 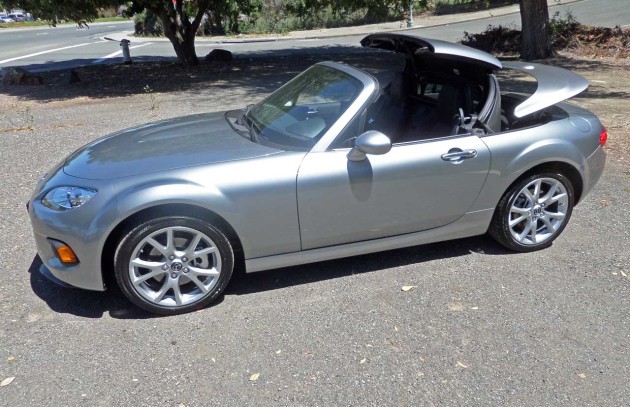 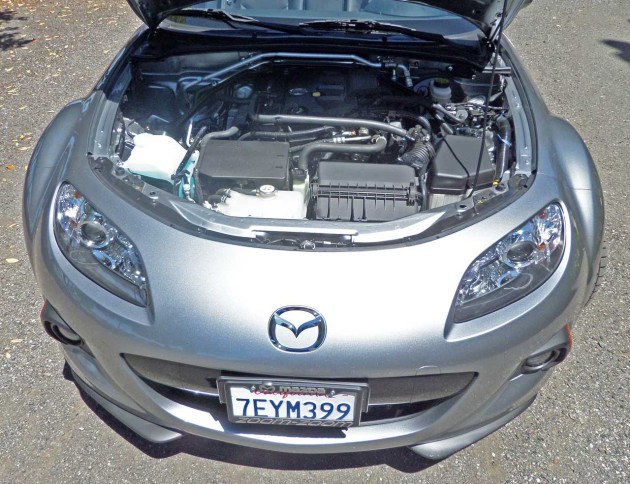 Power is still provided by a 2.0-liter DOHC, 16-valve VVT inline four-cylinder engine that generates 167 horsepower (158 horsepower with the automatic transmission) and 140 pound feet of torque routed through either a six-speed short-throw manual gearbox as standard, or optional 6-speed automatic transmission with steering wheel-mounted paddle shifters, to the rear wheels. The engine is longitudinally mounted forward, driving the rear wheels. 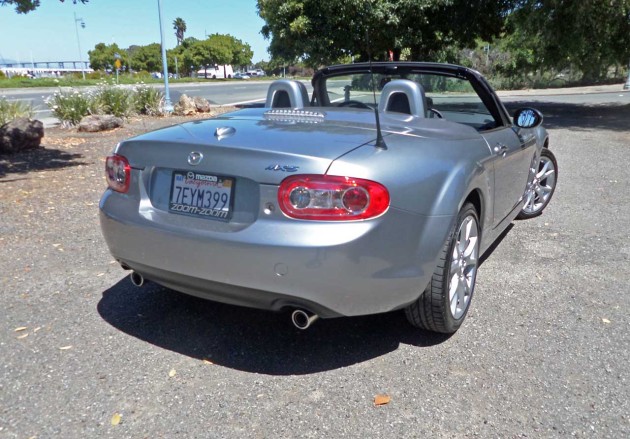 My test 2014 Mazda MX-5 PRHT was in Grand Touring trim with the six-speed automatic electronic paddle shifter transmission and a Liquid Silver metallic exterior body, and a complementing Black interior. The base price was set at $30,550. while the Premium Package, Delivery, processing and handling charge bumped the final total to $32,735. 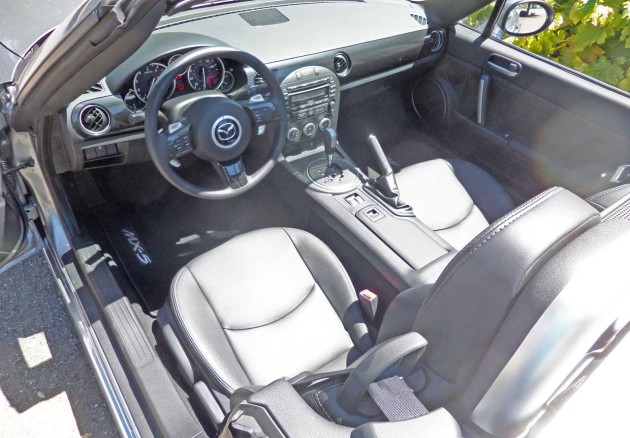 SUMMARY: The 2014 Mazda Miata PRHT (Oops, MX-5) has lost absolutely none of its appeal, regardless of the model chosen. In fact, there are no major changes from last year?s model except in the option change department ? the Dynamic Stability Control and Traction Control are standard fare and the diminutive roadster has, in essence, gained a higher status across the board. The manual gearbox delivers a positive response in the driving experience without question. 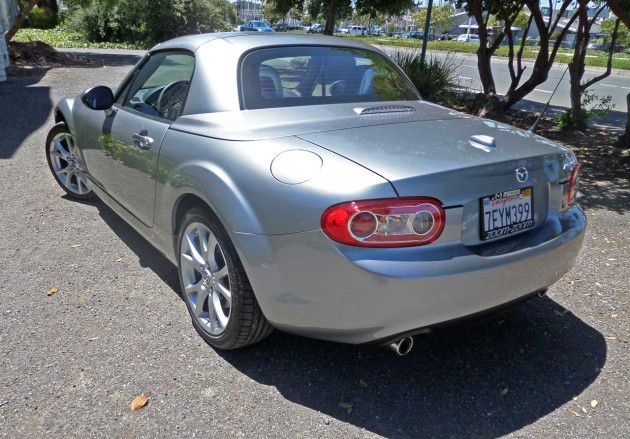 Acceleration, while perhaps not blistering to some, is quick enough, even if the engine is slightly on the “buzzy” side when prodded with gusto, but it doesn?t register as offensive at all. The engine?s growl is pleasing enough, but a heightened, throatier note from the exhaust would contribute considerably to even wider smiles and perhaps even some LOL. Handling is crisp and precise with pleasing throttle steer properties, and the car exhibits a very nice front to rear balance. 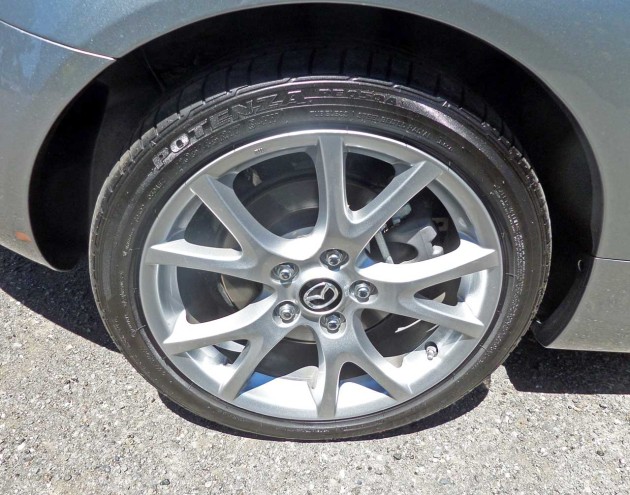 The biggest plus for me in driving the MX-5, is the added interior volume that accommodates my 6’4″ frame more readily than before. Its low ride height makes exiting somewhat of a chore for ectamorpohic types. The trunk capacity four percent larger than that of the second generation. It’s still not huge, mind you, especially with the top down, but I was able to stash two full size bags and a full-face motorcycle helmet without a problem. 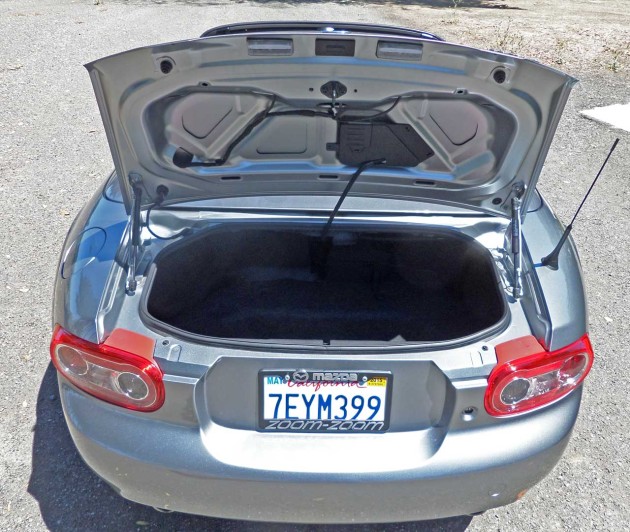 The MX-5 remains a true sports car with heart in conjunction with Mazda’s “Zoom-Zoom” spirit. In my mind, it will always be a Miata, (MX-5 or not) regardless of the top configuration. Kudos for the genuine sports car feel and looks, the slick, fast operating retractable hardtop and the totally adequate and comfortable interior accommodations for two. Essentially, the 2014 MX-5 Miata PRHT Grand Touring is race ready off the showroom floor provided that you add a roll bar and five-point harness for your self preservation and well being. 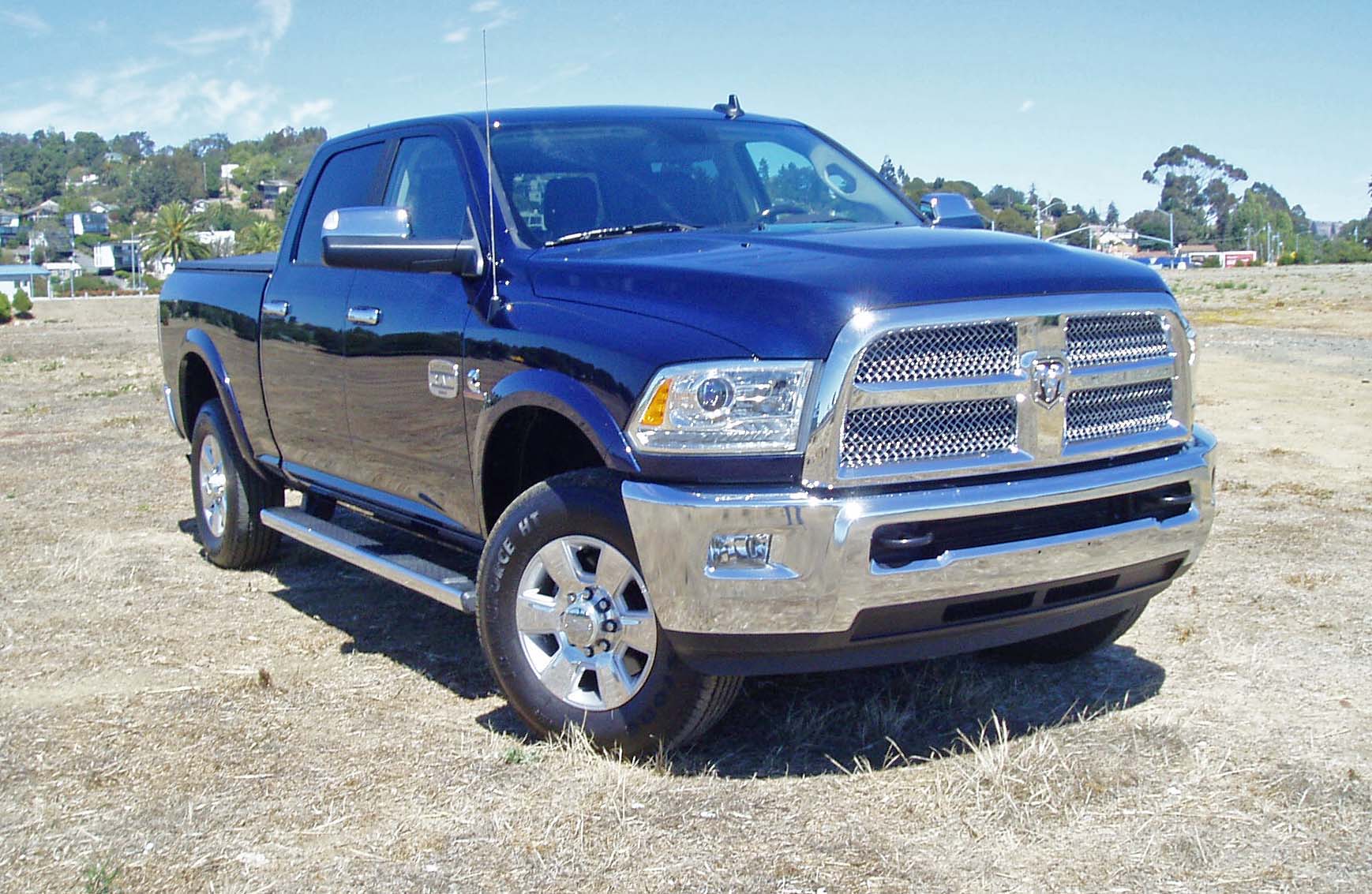 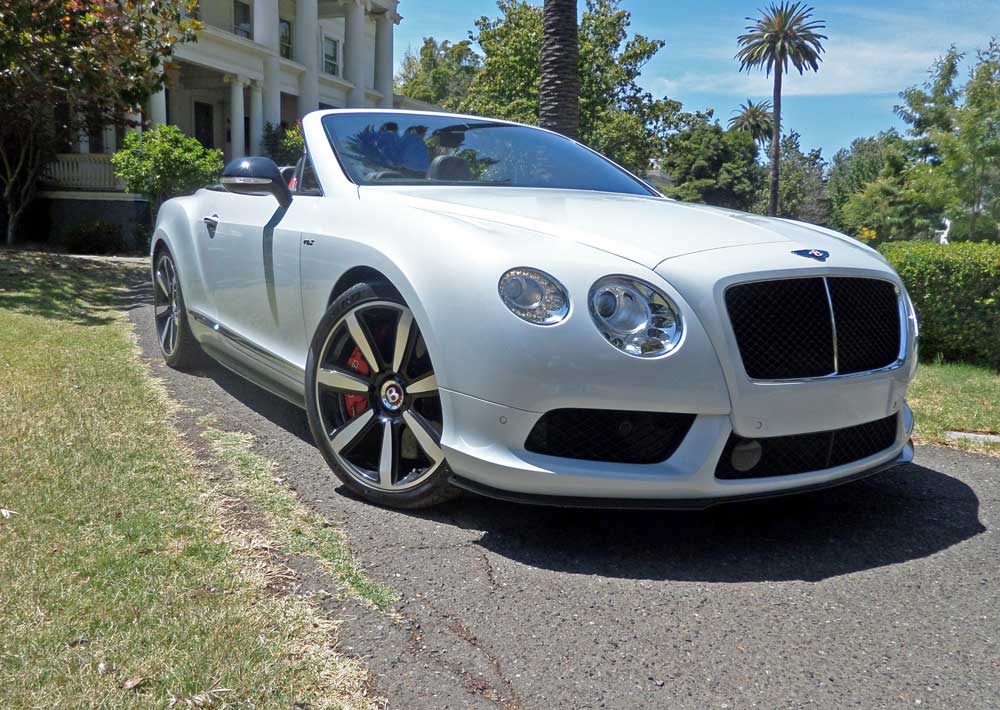