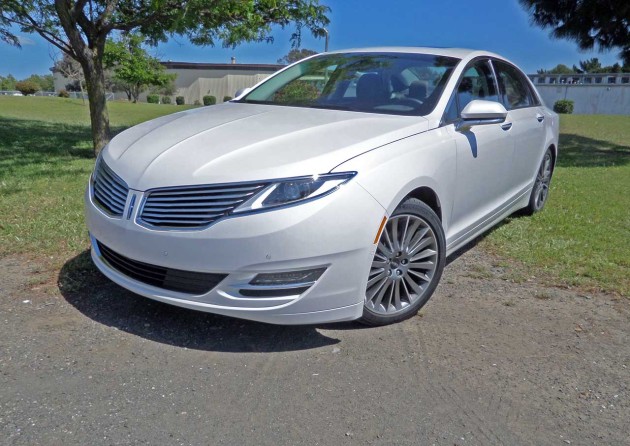 Lincoln?s MKZ sedan was launched initially in 2005 as a 2006 model building upon the luxury division?s proud standard set by the legendary Lincoln Zephyr. The 2010 MKZ benefitted from several functional and design improvements, making what was a good car an even better one. The 2014 Lincoln MKZ Hybrid takes the Lincoln Motor Company to an even higher level. 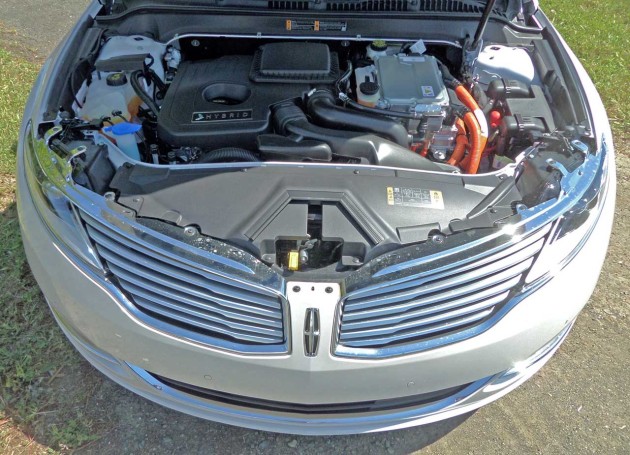 Power for the Lincoln MKZ Hybrid comes from a 2.0-liter, DOHC, 16-valve inline four-cylinder, Atkinson-cycle with , intake variable camshaft timing (iVCT), paired with a permanent magnet AC synchronous 88kW electric motor with an electronic Continuously Variable Powersplit. Energy is delivered by a 1.4 kWh lithium high voltage battery (35 kW). The gasoline motor puts out 141 horsepower along with 129 pound feet of torque at 4,000 rpm, while the combined gas/electric system?s net horsepower is 188 at 6,000 rpm. Motive energy is transmitted to the front wheels through a Six-speed SelectShift automatic transmission, operated by push buttons on the instrument panel.

The MKZ joins the flagship MKS sedan and MKT crossover with distinctive design elements, which include varying interpretations of Lincoln?s signature split-wing, waterfall grille that is reminiscent of the original Zephyr?s grille. The grilles are flanked by thinner, wrap-around headlamps, generating a wider, sportier appearance. The MKZ?s new, chamfered front fascia shares a family resemblance with the Lincoln MKS, featuring a sculpted hood and ridges that flow into the A-pillar. The rear sports a new decklid with wider LED taillamps, that further accentuate the car ?s width. 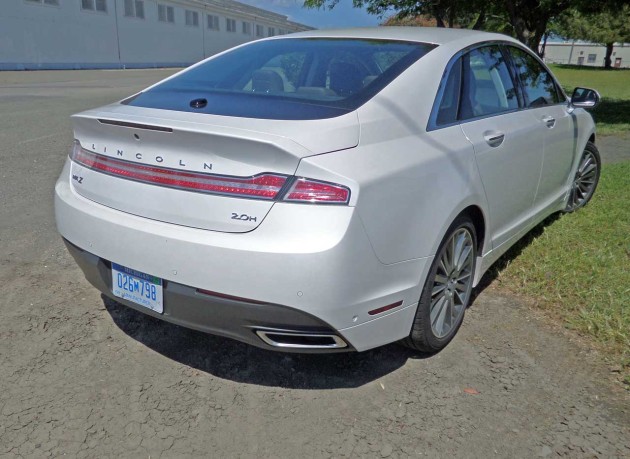 Inside, the cabin of the Lincoln MKZ Hybrid reflects an even more upscale look with genuine aluminum and wood along with an all-new instrument panel. Detailed touches include welcome lighting, chimes and tuxedo stitching as well as contrasting piping on luxury leather seats. Shifting gears, starting and stopping and the park brake are all activated via the IP positioned push buttons. 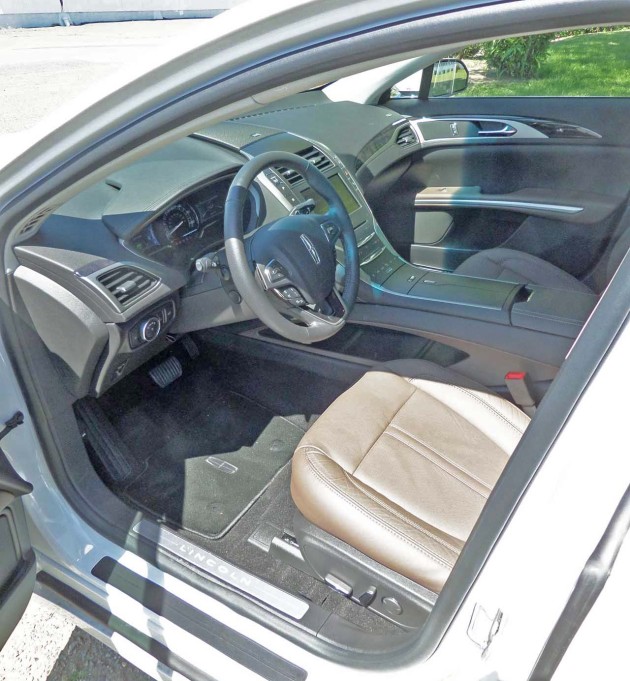 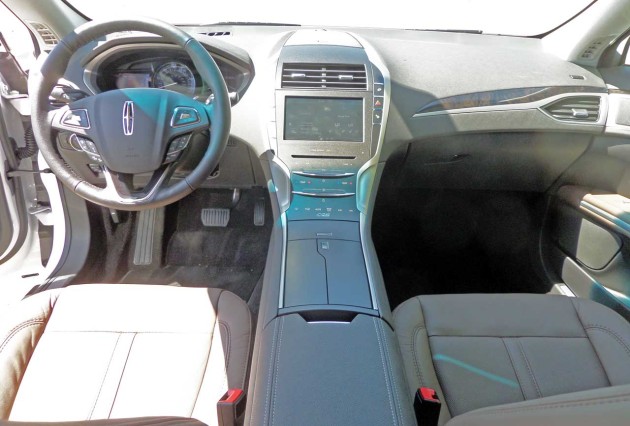 My test 2014 Lincoln MKZ Hybrid came in the Front-Wheel Drive configuration, as already mentioned AWD is not available. The exterior finish was done in White Platinum metallic, while the interior was executed in Hazelnut perforated leather with dark faux wood trim panels. The base sticker read $36,190. A Special Equipment Group Package and other stand alone options combined with the Destination charge elevated the final sticker to $46,800. Before tax and license.

SUMMARY: The only real issue that I have with Lincoln?s lineup of vehicles is the alpha-designation of their models ? there?s MKX, MKS, MKZ and MKT. Can anything be more confusing? I think not. Dealing with model variations is what I do, but I must sympathize with the consumer who doesn?t deal with such matters on a daily basis. Mind you, Lincoln isn?t the only guilty party ? BMW and Mercedes-Benz deliver the same level of confusion with their alphanumeric model designations.

Okay, having gotten that off my chest, let?s move on to state that the 2014 Lincoln MKZ Hybrid is a very desirable four-door mid-luxury sedan. It is attractive, it performs well, even as a Hybrid vehicle that delivers up to 45 mpg. The push-button transmission is intuitive and simple in its operation. The air conditioning in my test car seemed to be lacking in its cooling performance, even at the lowest temperature setting. If you require more power, the non-hybrid EcoBoost V6 provides a viable alternative. 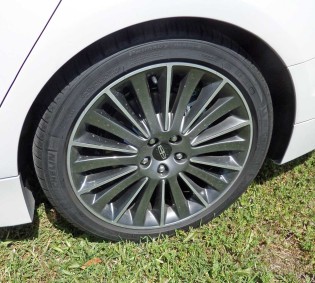 The Lincoln MKZ Hybrid falls just below the flagship MKS in Lincoln?s hierarchy, but my favorite is still the MKT (I think of it as a sport wagon) due to its more dramatic appearance and higher degree of versatility and functionality. If one doesn?t need the extra room or care about the more emotional design, and there?s no desire for the increased horsepower and performance delivered by the EcoBoost engine technology, then the MKZ Hybrid is obviously the sensible way to go ? it features all the familiar traits of a hybrid vehicle, regenerative braking, etc., while delivering fuel efficiency.
[wptabs style=”wpui-light” effect=”slide” mode=”horizontal”]
[wptabtitle] SPECIFICATIONS: 2014 Lincoln MKZ Hybrid FWD [/wptabtitle]
[wptabcontent] 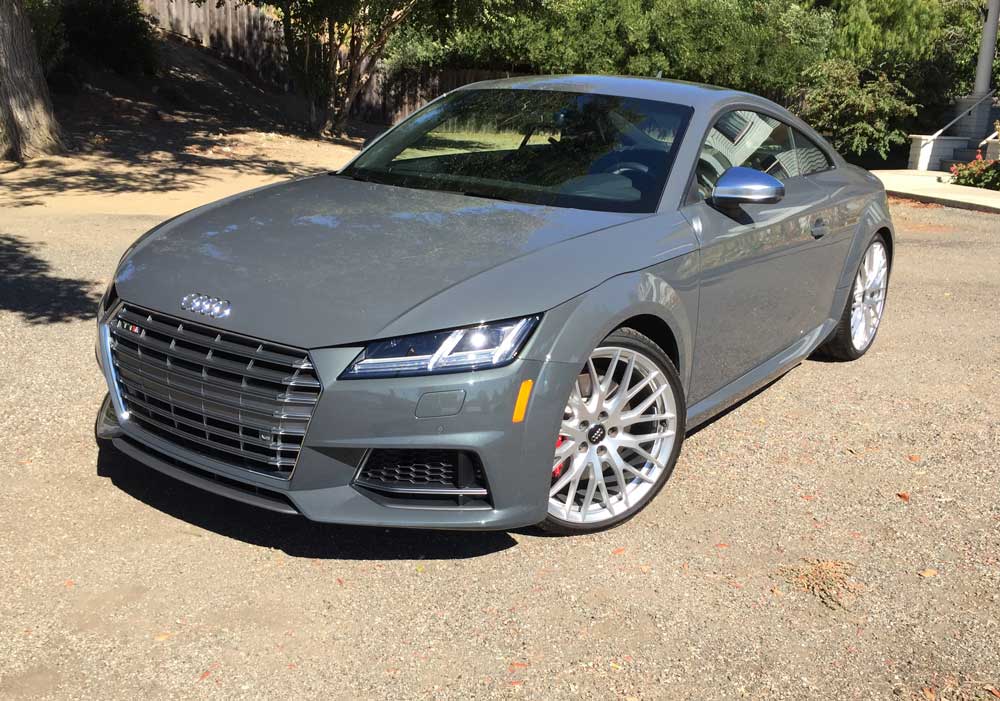