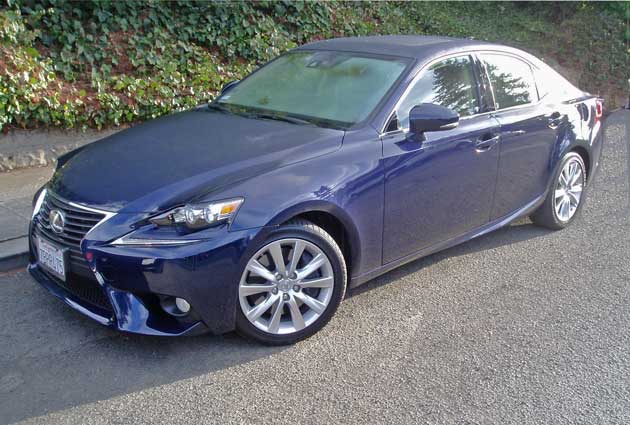 Now entering its third generation, the 2014 Lexus IS 250 and 2014 Lexus IS 350 both borrow some of their spirit and inspiration from the recent LFA Supercar ? an extremely limited edition, race-ready creation, consisting mostly of carbon fiber construction.?Lexus is generally thought of in terms of producing luxury level vehicles, ranging from entry to premium status. The pioneer of the Lexus sports performance set came in 2001 in the form of the Lexus IS F, which cranked out a healthy 400 horses from a V8 engine delivered to the rear wheels. It was the first Lexus to offer the F Sport option package, to compete with Audi?s S Line, BMW?s M Sport and the AMG models of Mercedes-Benz.

The LFA draws power from a 4.8-liter DOHC, 40-valve, rocker arm type, naturally aspirated 72 degree V10 engine with electronic fuel injection that delivers 552 horsepower along with 354 pound feet of torque. The engine sits upfront in a mid-mount position connected to a Rear-mounted six-speed Automated Sequential Gearbox (ASG) with a driver?s choice of seven gearshift speeds, metering motive force to the rear wheels. The cost? $375,000 before tax and license ? clearly out of the financial grasp of grass roots enthusiasts. 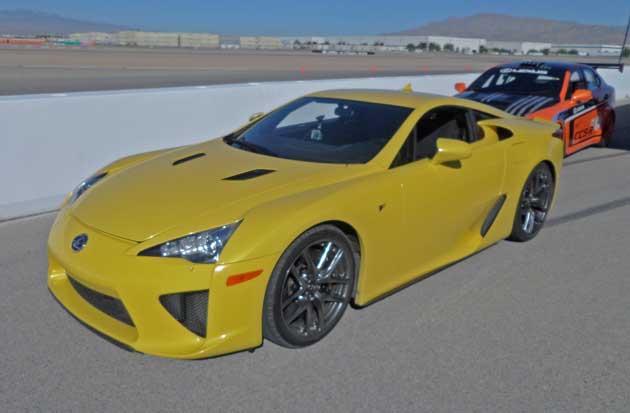 The 2014 Lexus IS stable will consist of two basic vehicles: The 2014 IS 250 and the 2014 Lexus IS 350 ? both V6s, which will come standard in a rear wheel drive configuration, but each available with All-Wheel Drive. Both drive setups for the IS 250 and the will gear motive energy through a 6-speed, electronically controlled automatic transmission with intelligence (ECT-i) featuring steering wheel mounted paddle shifters. The IS 350 will come with an 8-speed ECT-I automatic. 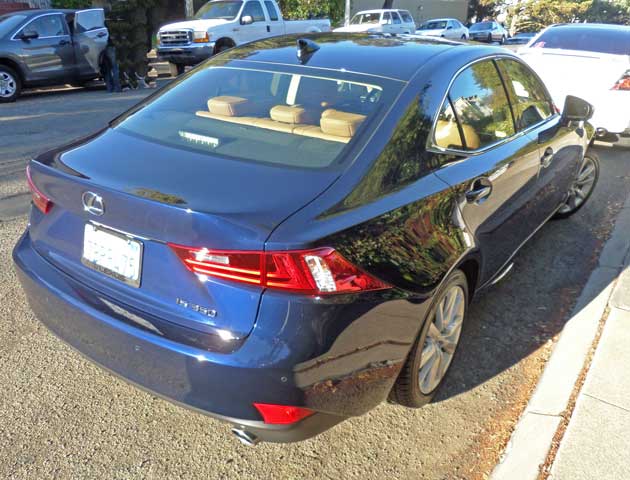 Visually, the 2014 Lexus IS models showcase a sleeker and much more aggressive exterior look, with a seemingly lower stance. Its blacked out ?B? pillar and bright surround trim gives the aerodynamic sedan a coupe-like persona. The wheelbase has been stretched nearly three inches, with the width increased by almost a half inch. The LFA inspired nose displays a more dramatic evolution of Lexus? signature ?Spindle? grille featuring a more three- dimensional design with a chrome-plated frame and darker gray insert both top and bottom. The F SPORT adds a bolder mesh-type grille for an even more dynamic look, along with other subtle performance styling cues. 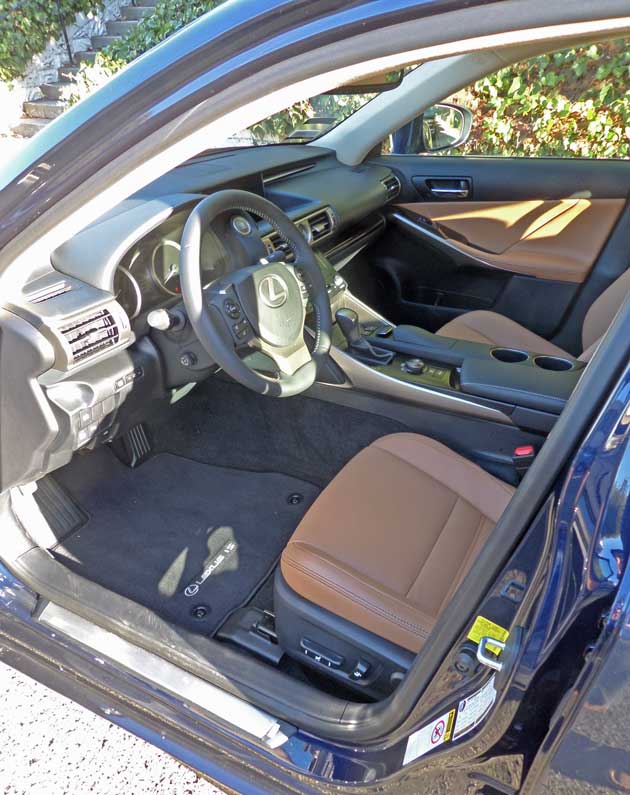 Inside, the driver-oriented cockpit design also draws its inspiration from the Lexus LFA supercar. The dashboard is divided into two separate zones – a display zone and an operation zone, providing drivers a more comfortable and ergonomically ideal interaction with the vehicle?s control systems. The longer wheelbase and a special front-seat design increases rear seat legroom by 1.6 inches, and the rear features standard 60:40 split-folding seats. There are soft touch finishes throughout, including padding on the center console sides, highlighted by a Silver metallic trim analog clock with surface-emitting illumination.

My 2014 Lexus IS 350 was a non-F Sport model in a RWD configuration with the 8-Speed automatic transmission, finished outside in Deep Sea Mica and inside in Mocha and Charcoal tones. The base price was set at $39,465 with the final total amounting to $40,360.

SUMMARY: The most dramatic design expression is exhibited by the IS F SPORT models; though the regular IS versions are very attractive and sporty in appearance 9n their own right. 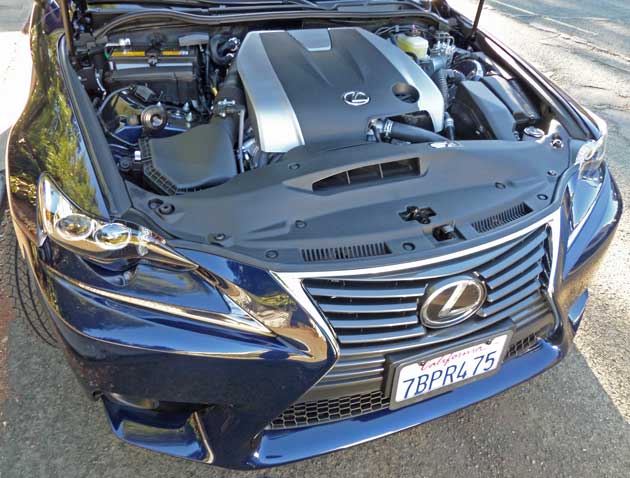 Power delivery is what one would expect from each of the V6 engines, with the 3.5-liter obviously exuding a higher output, with a more pleasing sound. The 2.5-liter is totally adequate however, and both the 6 and 8 speed automatics metered energy seamlessly. In terms of handling characteristics, I preferred the IS 350 RWD for its heightened feeling of agility. The F SPORT models in their base form, except for those with the available Adaptive Variable Suspension, actually performed no better than non F SPORT models, since they are mechanically identical. There are other available enhancements to add to the raw performance potential. There is no manual gearbox available, with the reasoning given that today?s automatic transmissions are capable of delivering a higher level of performance than virtually any mere mortal.

The ride quality is firm and stable, but is not at all harsh. The interior ambience seemed well above average, especially considering the pricing structure of the entire stable. The seats of the IS models were, by far the most comfortable and supportive of the competitive set when compared back-to-back, with the F SPORT seats providing the best support during spirited maneuvers.

In the final analysis, even though the 2014 Lexus IS 250 and IS 350 are categorized as entry-level luxury sedans, they might just be considered to be a cut above that ranking. The entire IS lineup delivers good looks, sumptuous interior comfort along with a high degree of satisfying, sporty performance. It may not outperform BMW?s 3-Series on the track in terms of overall handling prowess, but it can definitely hold its own. It is sure to attract younger, upscale tuner types. 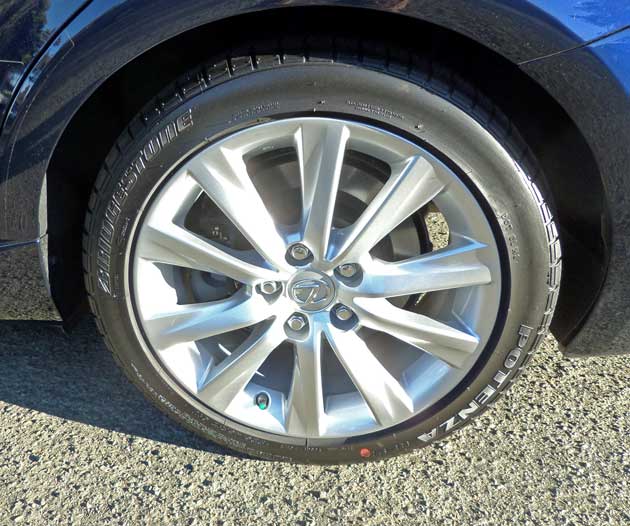 Add the comprehensive warranty program which consists of: a 48 month/50,000-mile basic limited warranty with roadside assistance for 48 months/unlimited miles, a 72 months/70,000 miles powertrain and restraint system coverage along with 72 months of corrosion perforation protection coverage, regardless of mileage, and the 2014 Lexus IS stable makes for a sound choice in a sporty, luxury sedan. 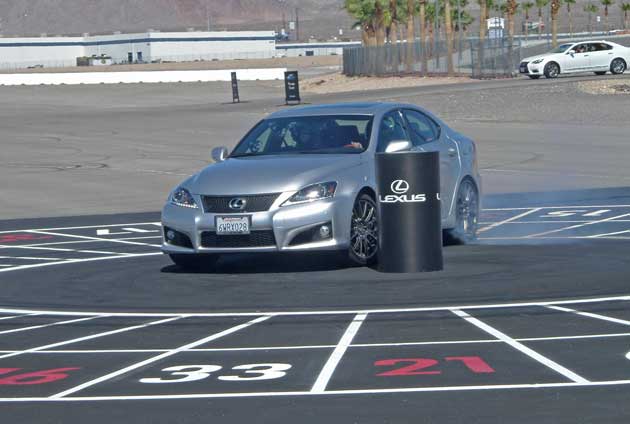 What?s the F ?
In a special F-Sport program titled ?What?s the F?? The Lexus team formulated a unique opportunity for auto scribes to test the lineup of 2014 Lexus IS?F SPORT models, staged at Las Vegas Motor Speedway with both a road course and an autocross course set up. Professional race driver and 5-time Rolex 24 Hour of Daytona champion Scott Pruett gave hot laps on the road course in the LFA model. Professional driver and drift champion Ken Gushi, who participated in the last two Pikes Peak International Hill Climbs provided hot laps on the road course in a specially prepared IS F – CCS-R (Circuit Club Sports Racer) as well displaying his drifting skills. 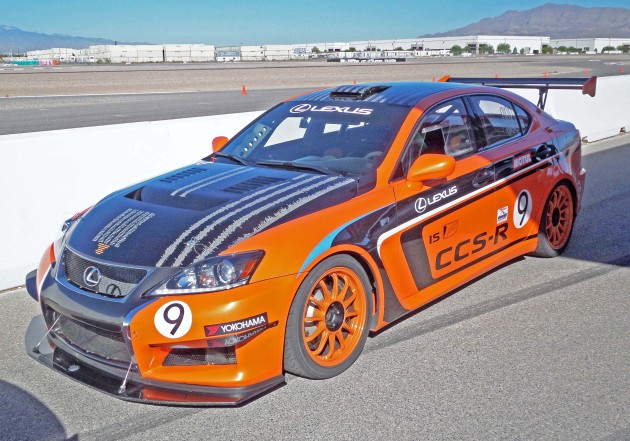 The designation of ?F? actually was used to represent Lexus before the division had a name, which was known internally as ?Circle F?. The first vehicle developed for the brand was called ?F1?, for flagship 1, which was to become the LS sedan. The ?F? became relevant again when the company decided to produce performance products, with much of the testing performed at Japan?s 16-turn Fuji Speedway. F Sport performance packages are offered for consumers who desire increased handling capability complemented by unique visual cues. The F-Sport packages were first introduced on the IS in 2011 and are now available on 6 Lexus model lines.
[wptabs style=”wpui-light” effect=”slide” mode=”horizontal”]
[wptabtitle] SPECIFICATIONS: 2014 Lexus IS 350 [/wptabtitle]
[wptabcontent] 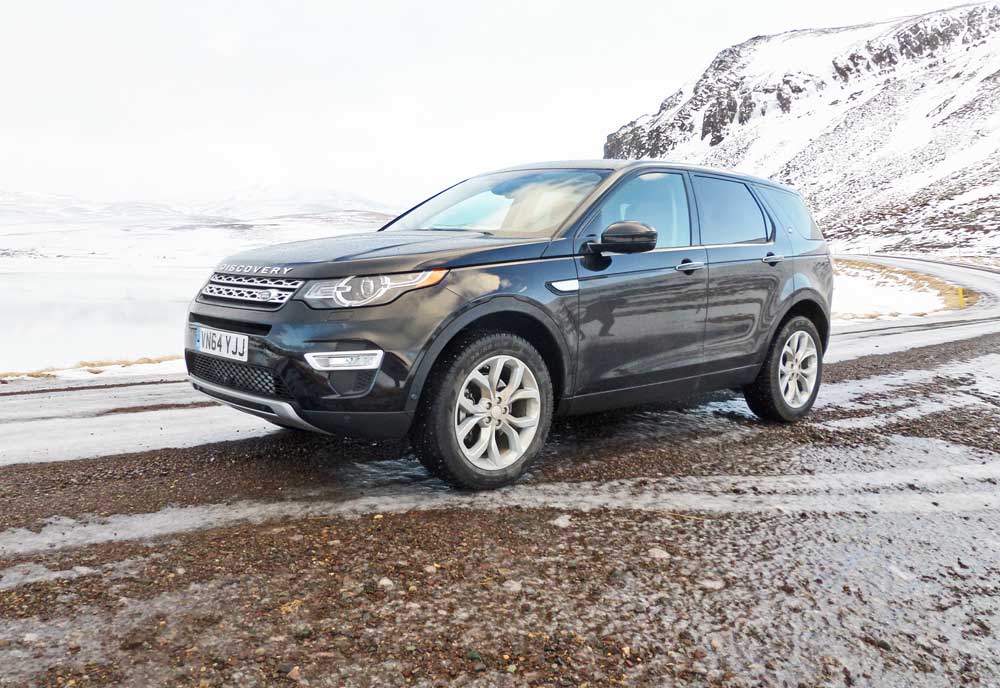