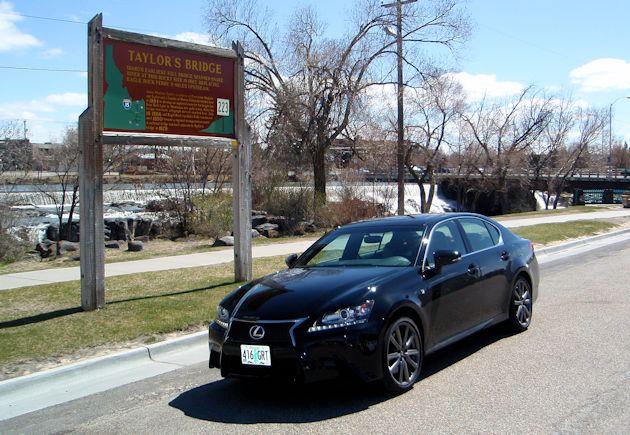 Leaving Boise after one night we made a note to ourselves about wanting to spend more time in the modern vibrant community ? perhaps a weekend road trip.

Our second day driving the 2014 Lexus GS 350 AWD took us on a swing south through the Idaho farmlands and the Idaho cities of Twin Falls, Pocatello and Idaho Falls before turning north toward West Yellowstone, Montana. We stopped and wandered through each of the small rural cities taking in the local flavor and the early signs of spring. 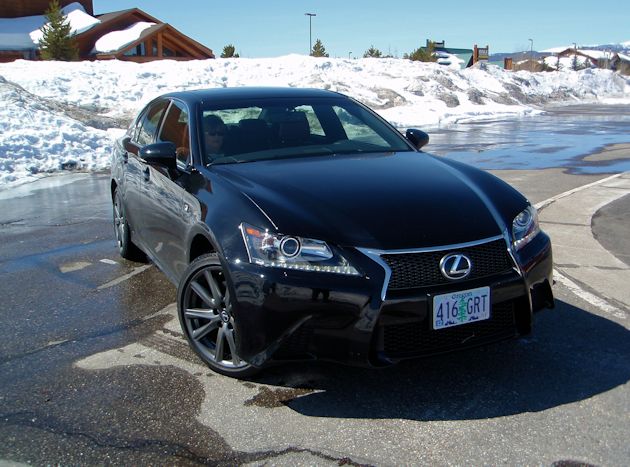 As we left Interstate and headed northwest toward West Yellowstone, Montana we drove south of the famous Sun Valley resort area and Craters of the Moon National Monument. Our route even cut through some of the southern lava fields and farm land that looks like bunches of circles from an airplane. 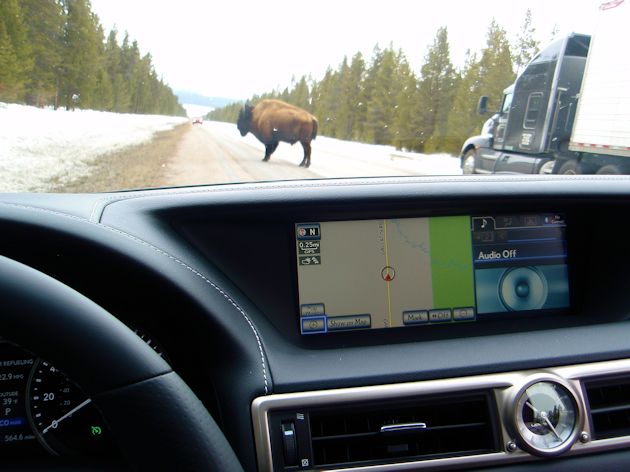 As we neared West Yellowstone the elevation climbed and the snow along the roads got deeper, especially where it had drifted or been plowed. As we navigated the plowed West Yellowstone streets trying to locate our Worldmark time share, we were pleased that we had an all-wheel drive car, or as Lexus calls the GS 350, all-weather drive. 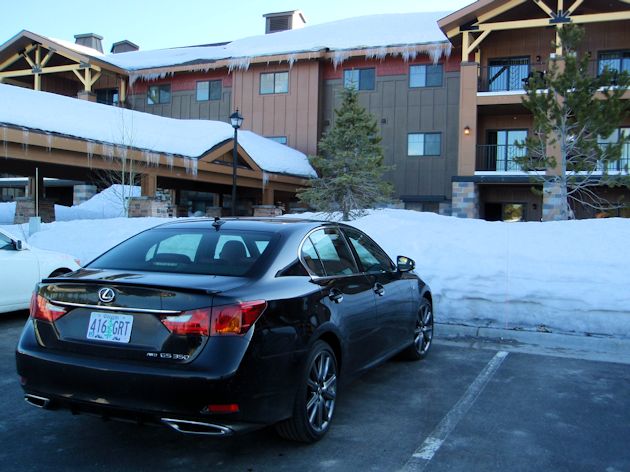 The Lexus AWD system uses an electronically controlled center differential to transfer torque front-to-rear as much as 50/50. During normal conditions the system provides a 30/70 front/rear split. The system is invisible to the driver and makes the changes instantly as needed.

When we finally found our icicle-clad destination behind eight-foot piles of piled snow we checked in to the large, nearly empty resort, rested for a few minutes and then went out to explore the little town just outside America?s first national park (some say the world?s). In early April, we discovered, about 80 percent of West Yellowstone is closed?motels, restaurants, stores, everything. 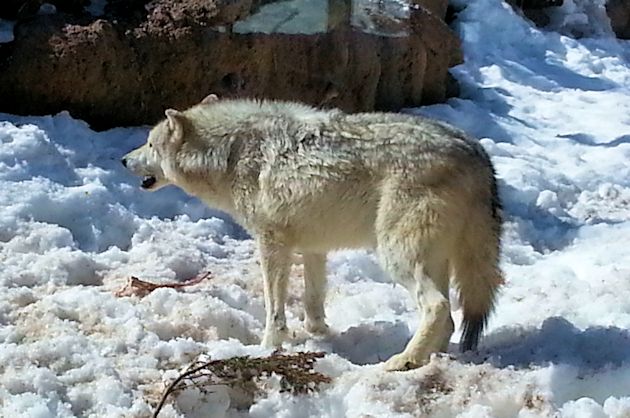 In our effort to prepare for the trip it seems Bill forgot to check on all the facilities and Yellowstone Park itself ? it seems the park was closed until the following weekend ? three days after we were scheduled to leave. This gave us three days and nights to explore our room, eat in a couple of the local restaurants that were open (one which was McDonalds) and watch several movies.

One attraction that is open year-around is the Grizzly & Wolf Discovery Center. This is a beautiful facility, and not one of those tacky roadside attractions. The beautiful animals are in large natural habit-like enclosures and there are experts to talk about the big animals. This was definitely one of the highlights of the trip. 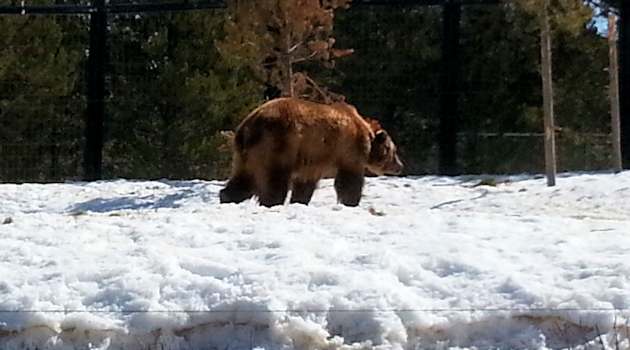 Yellowstone Park is open in the winter and there are companies that take people into the park on snowmobiles or in snowcoaches; however the park is closed annually for a few days while the roads are plowed. We hit that time perfectly. 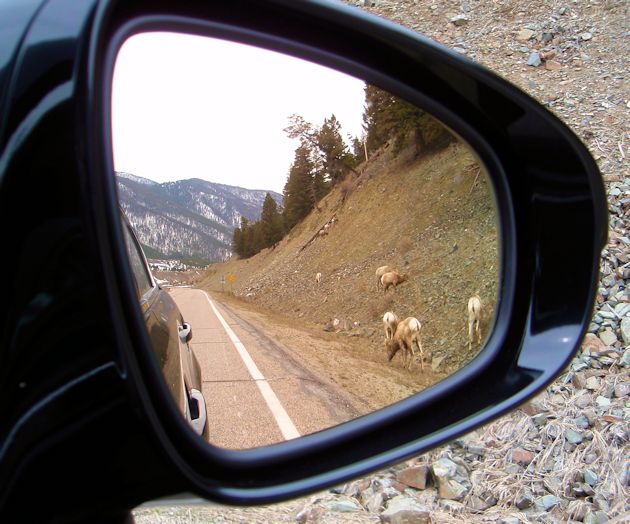 During a couple of drives around the area we met several of the local inhabitants ? buffalo, mountain sheep, Osprey, elk, and antelope were more plentiful than people. Also a big hit with Barbara were the fascinating giant Ravens that were everywhere, it seemed. 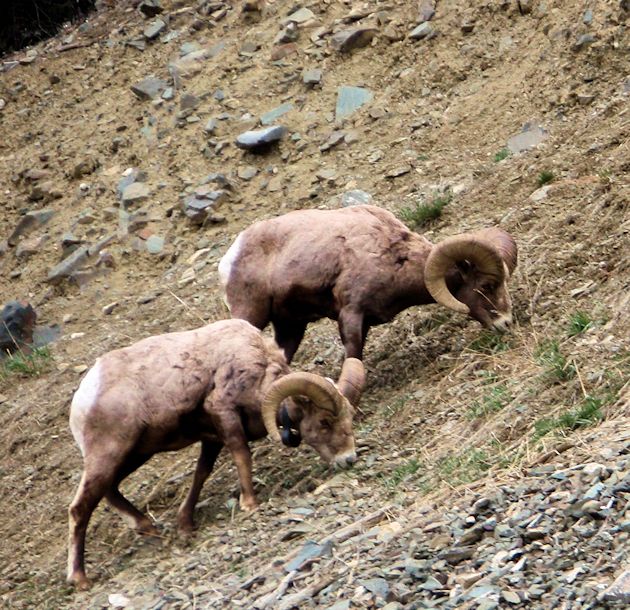 At more than 6,600 foot elevation, mornings were quite cold, and we really appreciated the Lexus GS optional climate control system. The unique Lexus system automatically monitors the temperature of three separate climate zones and adjusts not only the fans, but also the temperature of the seats and steering wheel individually. Each zone achieves its pre-set level of comfort as quickly as possible.

Leaving West Yellowstone without seeing a geyser or bubbling hot spring we drove north toward Helena through Ennis, which they claim is in the heart of world?s best fly-fishing country. We were surprised by the hundreds of large beautiful homes on the hillsides throughout the area. This seems to be a popular place to build big vacation homes. 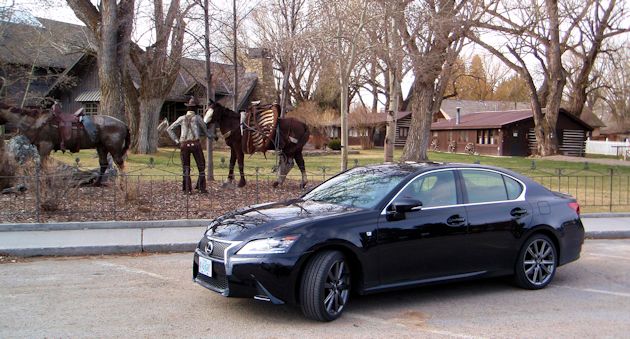 We also took a side trip from Ennis up to Virginia City, Montana?s famous wild west city, and its infamous Boot Hill. There was nothing open that morning, but Bill remembered it being a big tourist attraction in the summers when he was growing up 100 miles northwest of there. 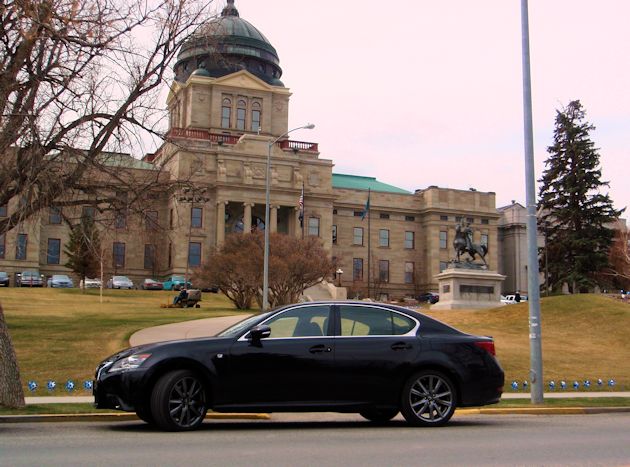 By early afternoon we were pulling into Montana?s state capitol where Bill?s mother and his brother and family live. We did a little exploring but spent most of our time in Helena visiting with family. One of our ?must eat at? stops in Helena is the Suds Hut restaurant which has some of the best fried chicken we?ve ever had. One night we had dinner at Bill?s brother?s house and his sister and her family came over from Deer Lodge bringing great Montana steaks for a barbecue, Yum, Yum! 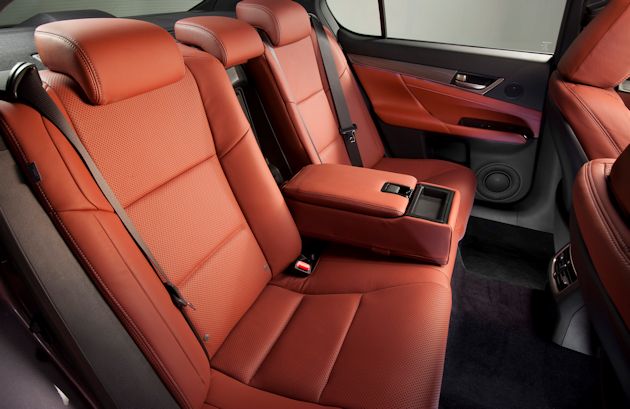 The following Saturday morning we got up early and started home planning to make the 645 mile drive in one day. It?s a beautiful drive to Missoula where we stopped for breakfast and gas before proceeding over Lookout Pass to the Idaho panhandle, through Coeur ?d Alene and on to Spokane.

Then it?s down to the Tri-Cities and back down the Columbia River on Highway 14 to home making the drive in about 10 hours after gaining one hour of time change.

We?d grown very comfortable driving the Lexus GS 350, but were sorry and glad (at the same time) we didn?t have a chance to test out the all-weather drive. The car was very comfortable and the rear seat was quite spacious, as was the trunk which had packed with a week?s worth of luggage and several bags of books we took to the library of the retirement complex Bill?s mother lives in.

Lexus has been a leader in communication and entertainment technology with features like the integrated Siri??Eyes Free Mode, with technology licensed from Apple?. It lets you call contacts, select and?play music?from iTunes?, get turn-by-turn navigation through Siri and Apple maps.
We especially like the Lexus control system which works very much like a computer mouse to select items on the massive 12.3-inch multimedia display with split-screen capability. You can view a large map display on the left side while also monitoring audio, climate or other vehicle information on the right.

The Lexus communication system uses a Bluetooth compatible smartphone made even smarter with the Enform service. The Lexus Enform provides access to the subscription-free App Suite which searches the Internet through Bing?, makes restaurant reservations through OpenTable? and can get movie tickets via MovieTickets.com?. It also allows you to listen to Internet radio, including Pandora?, and? iHeartRadio?, search business reviews on Yelp?, and check in on? Facebook Places?.

We used the system to find the best prices on gas and places to eat along our route. We appreciate all the extra entertainment features, but our favorite travel entertainment on road trips is still the audio books which we bring along from our local library. We listened to three on this trip. 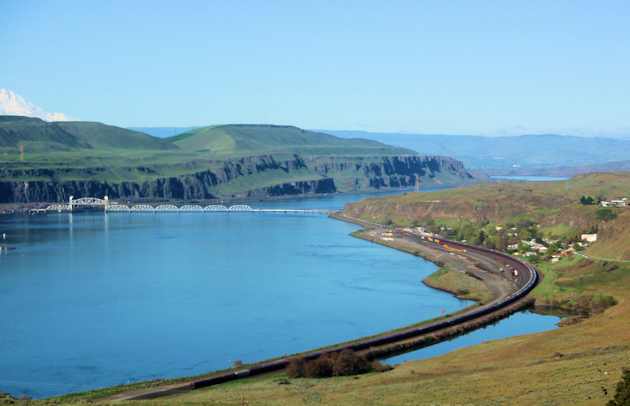 The 2014 Lexus GS 350 pricing starts at $49,520 including the destination charge for a rear wheel drive model. All-weather drive adds $2,250. A fully loaded AWD with the F Sport package and all the available options takes the price to just over $65,000. The GS is also available as a hybrid which has a very well equipped base price of $61,340.

The 2014 Lexus GS 350 AWD F Sport is a beautiful sport sedan and makes an excellent road trip car. Although it was just the two of us on this trip, it would be comfortable for four. It might not get the best fuel economy, but we thought the numbers were respectable for the car and it?s certainly a fun car to drive and a good example of the Lexus commitment to ?The Pursuit of Perfection.? 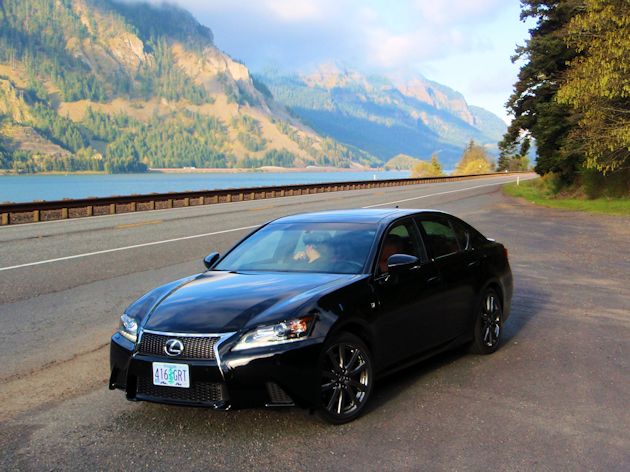 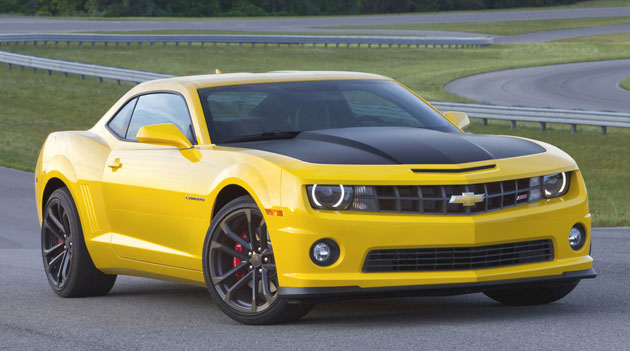 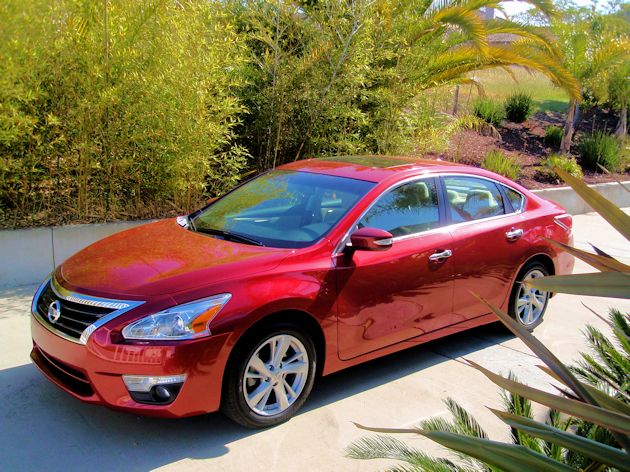