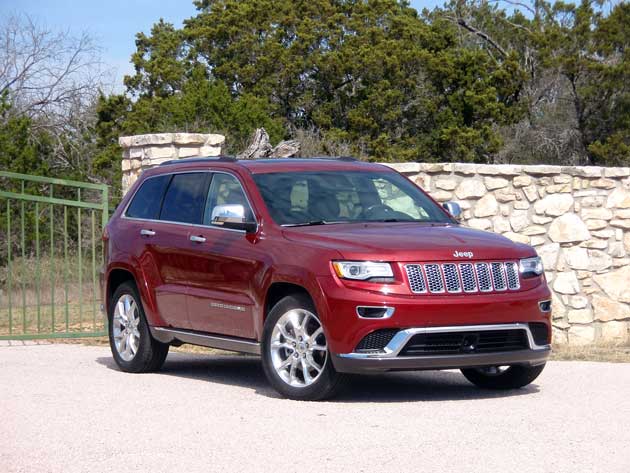 Austin, Texas – If I were giving auto manufacturers awards, Jeep would get a gold star from me for introducing the 2014 Jeep Grand Cherokee Diesel. I think that?s a big, important move for an American manufacturer to make right now.

Jeep mangers say consumers have been asking for a diesel-powered Grand Cherokee. After driving this new Grand Cherokee with its 240 horsepower and 420 lb.-ft. of torque 3.0-liter EcoDiesel V-6, I think this should fill that request very nicely.

A new eight-speed automatic transmission is standard equipment for the EcoDiesel engine and all the 2014 Jeep Grand Cherokee models including the super high performance SRT. The eight-speed is smoother, shifts faster and helps produce better fuel economy than the previous transmission. 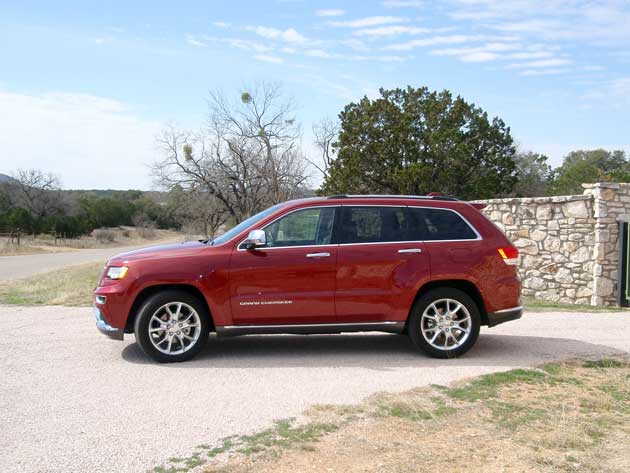 The most important feature of the EcoDiesel is the best in class fuel economy of 22 mpg city and 30 mpg highway fuel economy for the rear drive models (21/28 mpg for four-wheel drive models). Imagine up to 730 miles between fuel stops ? it?s going to require a strong bladder to go between stops for fuel. The EcoDiesel accelerates from 0 to 60 mph in an estimated eight seconds, but the massive torque actually makes it feel even more responsive than the numbers indicate. The new engine also has low CO2 emissions.

In addition to the new EcoDiesel, the 2014 Grand Cherokee is available with the award winning 290-hp 3.6-liter Pentastar V-6 engine and 360-hp 5.7-liter V-8 with Variable Valve Timing. For shoppers that are looking for the ultimate Jeep on-road performance there is the SRT model with its 6.4-liter Hemi engine, rated at 470-hp and 465-lb.ft. or torque, but that?s another Jeep story.

Three different four-wheel drive systems are offered on the 2014 Jeep Grand Cherokee:
* Quadra-Trac I is a full time system with no switches or levers.
* Quadra-Trac II has a two-speed transfer case, which sends as much as 100 percent of the available torque to the axle with the most traction.
* Quadra-Drive II has an Electronic Limited-slip Differential. It instantly detects slippage and distributes torque to the tires with traction.
Quadra-Trac II and Quadra-Drive II both include the Selec-Terrain system, which allows the driver to select from five different driving conditions (Sand, Mud, Auto, Snow, and Rock).
Grand Cherokee is also available with the Quadra-Lift air suspension system that has the ability to adjust through five ride height settings to maximize vehicle height for the best off-road (up to 11.3 inches) ground clearance or to lower it for the best aerodynamics.

Obviously, the mechanical changes are the big story for the 2014 Jeep Grand Cherokee, but there is also a new level of design and feature refinement. 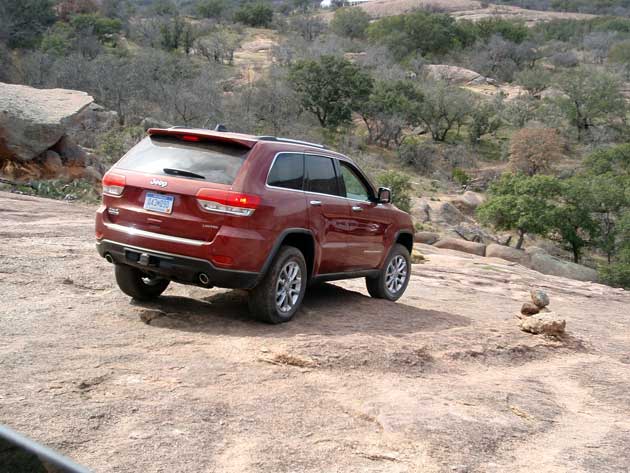 ?With the new 2014 Jeep Grand Cherokee, we have taken the industry?s most highly acclaimed SUV and elevated it to an even higher level,? explains Mike Manley, President and CEO ? Jeep Brand, Chrysler Group LLC. ?Jeep has proudly separated Grand Cherokee even further from its competitors by enhancing its unique elegance, efficiency, capability and technological features. Consumers will clearly find the new Jeep Grand Cherokee to be even more of a pleasure to drive ? on any and all roads, on the most demanding trails, and in all weather conditions.?

The 2014 Jeep Grand Cherokee lineup includes four models: Laredo, Limited, Overland and Summit. Each model is available in rear- or four-wheel drive. Prices range from $29,790, including the destination charge, for the two-wheel drive Laredo up to $51,990 for the Summit 4×4. The EcoDiesel engine is a $4,500 option on the three upper level models and $5,000 on the Summit 4×4. All models are exceptionally well equipped and the Summit has all the available features as standard equipment, except the Blu-ray DVD rear seat entertainment system. 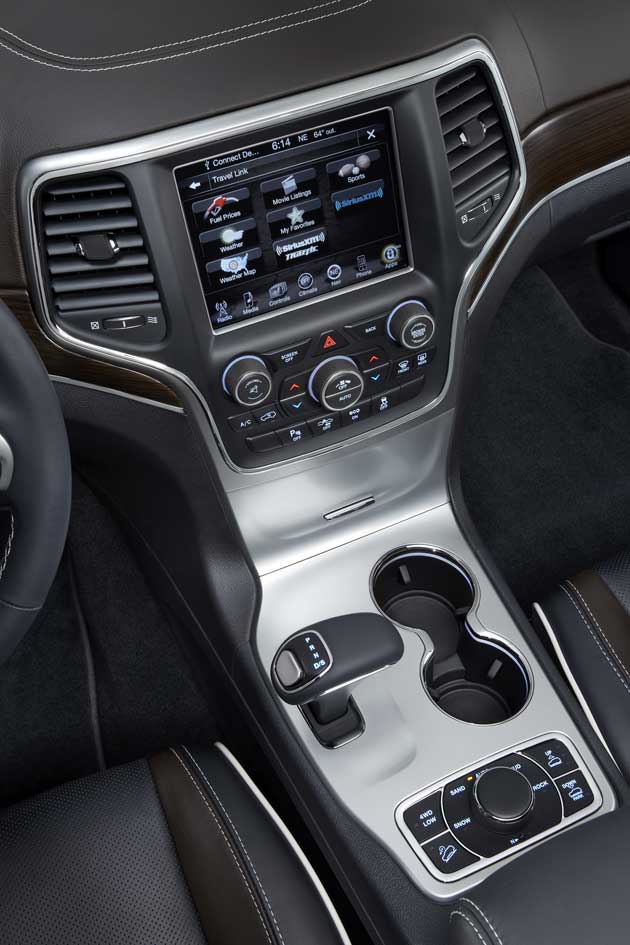 All four 2014 Jeep Grand Cherokee models wear a distinctive new look with model specific wheels, grille treatments and other alterations. Looking more upscale, each model starts with a shorter version of the Jeep trademark seven-slot grille and trimmer headlights. The result is a buff, shapelier look. The taillights are larger and powered by LEDs for quicker and brighter response. The rear has a more aerodynamic spoiler and there is a re-sculpted tailgate with more window area for greater visibility. The three upper level models all have standard dual exhaust tips, too.

The interior is beautiful with rich leathers,?subtle?wood accents, French stitching, and brushed aluminum style brightwork. Controls are conveniently located and well-marked. ?The seats with contrasting stitching and piping are nicely bolstered for good support. 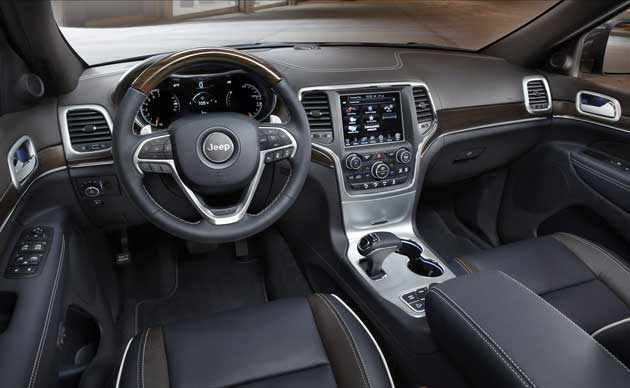 The 2014 Jeep Grand Cherokee models are loaded with impressive new technology. The Uconnect Access system with the 8.4-inch touch screen is one of the best navigation/communication systems I?ve used. The icons are large, easily identifiable and the system doesn?t hesitate when an icon is touched, it jumps. It also has some cool features like a cloud based voice texting so the driver can keep his or her thumbs on the steering wheel where they belong. There?s also a seven-inch multiview screen located in the center of the instrument pod that can be reconfigured to provide information about navigation, audio, trip computer and Selec-Terrain modes.

Some of the features that particularly caught my attention were the integral hitch cover that hides the trailer hitch and the Selec-Speed Control. The speed control works with Hill-descent Control and the new Hill-accent Control allowing the driver to change the speed by tapping the steering wheel mounted shift paddles. Incidentally, the paddle shifters are standard on all models.

When it comes to features and luxuries, the upper level 2014 Jeep Grand Cherokee models will hold their own against any of the luxury imports. In addition, for off-road prowess, the new Grand Cherokee is all Jeep. Showing that the Trail Rated 4X4 is more than simply a clever marketing tag, the Jeep people found a challenging off-road course at the Inks Ranch near Llano, Texas in the famous Texas Hill Country.
To see how well the 2014 Jeep Grand Cherokee handled off road, we drove through some typical off-road terrain like dry streambeds, over some rocks and other minor challenges, on our way to Watch Mountains?s 300-foot wall of granite. Imagine a humongous chunk of granite with a face that slopes about 55 degrees. The idea was to climb the rock, turn around and drive down. 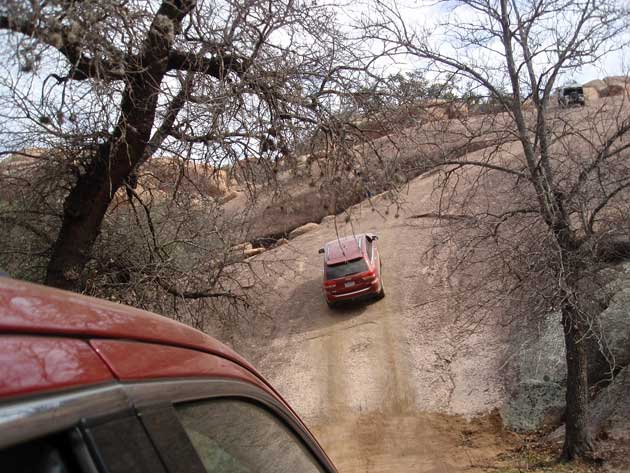 This was a great place to check out the new drivetrain features. Set the Selec-Terrain to ?rock,? set the Selec-Speed Control and all you have to do is steer and make any necessary speed adjustments with the paddle shifters. Look mom, no feet — the Jeep walks you up the wall. This wall of granite is so steep the only way to know where you are going is watch the spotters telling you which way to turn. On the way down you are literally hanging from your shoulder harness and looking straight down as the Selec-Speed control eases you off the rock. I felt like Wile E. Coyote dropping off a cliff in slow motion.

It was amazing! — and that?s the perfect description of the 2014 Jeep Grand Cherokee.

All three Grand Cherokee powerplants are impressive, but I?m a big new fan of the gold star winning EcoDiesel. 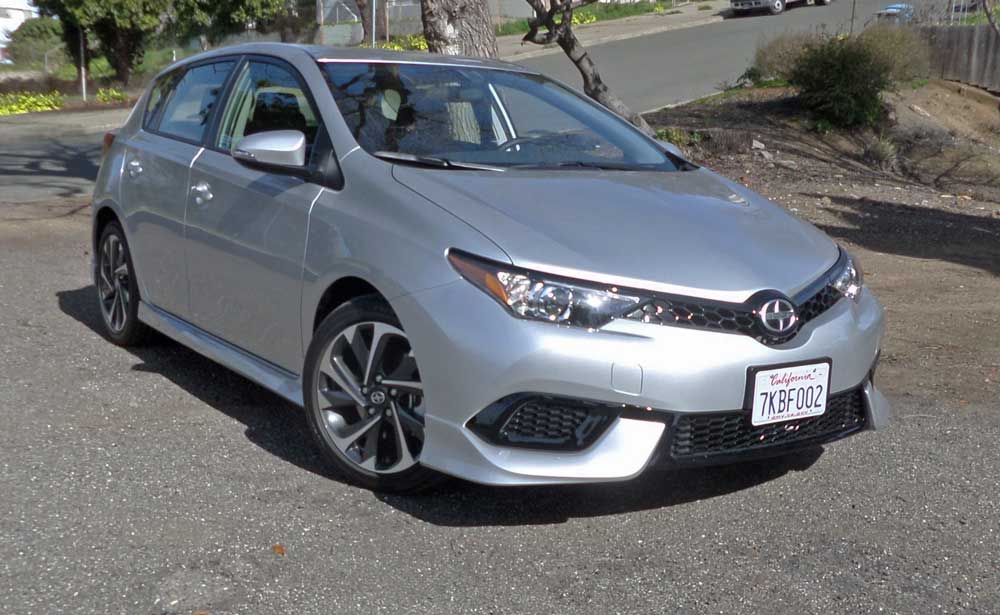 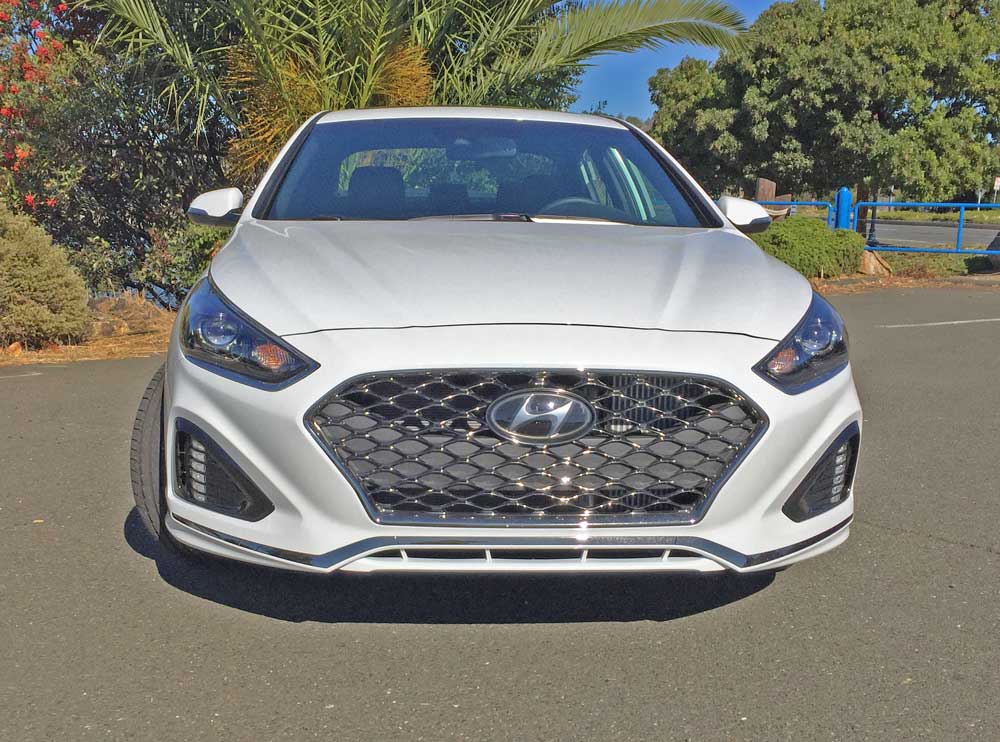