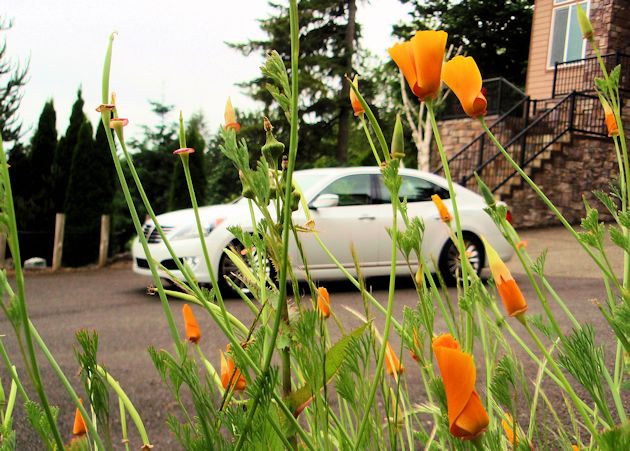 Initially, the idea of Hyundai building a full-size luxury car was about as alien to the upscale automotive market as it was for Toyota to build the Lexus 25 years ago. Never-the-less Hyundai eased into the mid-size rear-wheel drive market in 2008 with the Genesis, and then went whole hog in the U.S. market in 2011 with the full-size luxury Equus.

The initial Equus met with limited success, but Hyundai is staying the course and for this year have redesigned and refined the large sedan. In just its fourth year in the luxury market the 2014 Hyundai Equus is very close in luxury features, quality, comfort, styling, performance and safety to all the mainstream luxury brands including Mercedes-Benz S-Class, BMW 7-Series, Audi A8, Lexus LS, and Jaguar XJ. What sets the Equus apart from the crowd, though, is the price. With the price starting at $62,170, including the destination charge, and peaking at $69,420 the Hyundai Equus is priced from $10 to $20 thousand lower than competitors, easily making the Equus the top value luxury sedan. 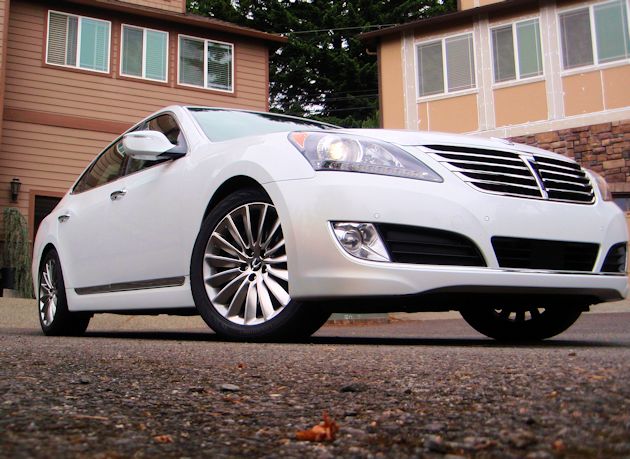 Equus may not be quite at the same level as the famous brand name luxury cars, but it is so close?! And frankly, the major deficit is an upscale brand name?but that will come with time.

Hyundai has even gone to extra effort to make the Equus ownership experience special. Hyundai dealers selling the Equus have special areas of their showrooms for Equus shoppers. They offer ?Your Time, Your Place? at-home vehicle demonstrations, ?At Your Service? valet service appointments and an interactive owner?s manual app for Apple iPad?. Included with the ?At Your Service? are completely free maintenance services for three years or 36,000 miles. 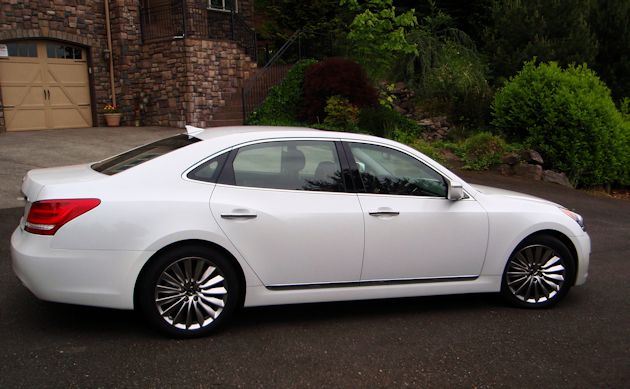 What a 2014 Hyundai Equus owner gets is an attractive full-size sedan with its own stately look and even its own badging ? the Hyundai logo is limited to one spot on the trunk lid. The exterior is stately with clean sculpted body panels, tasteful chrome accents and 19-inch turbine-blade alloy wheels. 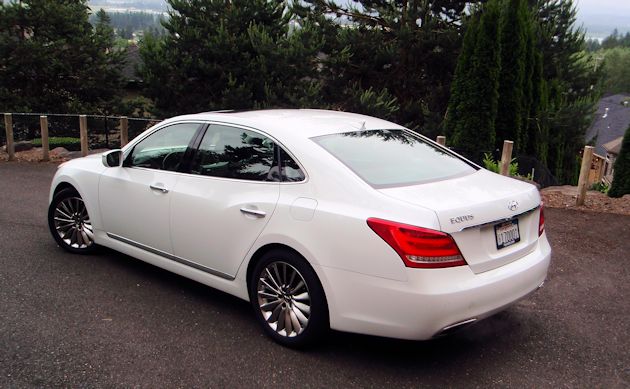 The 2014 Hyundai Equus is available in two optionless trim levels the Signature and Ultimate, which are priced at $62,170 and $69,420 respectively. Both models have a massive list of standard equipment with the Ultimate adding more of the comfort features and driver aids like the 12.3-inch digital display instrument panel, Head-up display, Multi-view camera system, power trunk lid and so on. 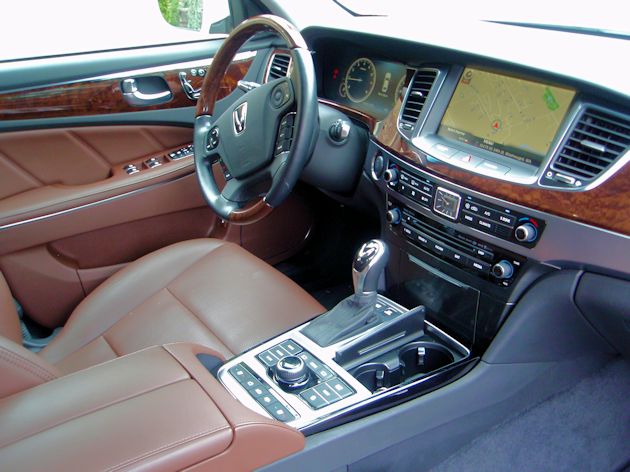 The interior treatment is understated with an expanse of real wood across the dash, and large controls in a horizontal pattern across the wide center stack. The standard navigation and control display is a large 9.2-inch high-resolution unit. Our Ultimate trim level test vehicle also had a rear-entertainment system also with 9.2-inch HD screens on the back of both front seat headrests. The rear screens could also be used by the passengers to view the navigation map, watch movies, play audio media and control HVAC in the rear seat. Passengers could also use the system to do things like search for restaurants or other points of interest. Earlier Equus models had seating for two in the rear, but the new version seats three. 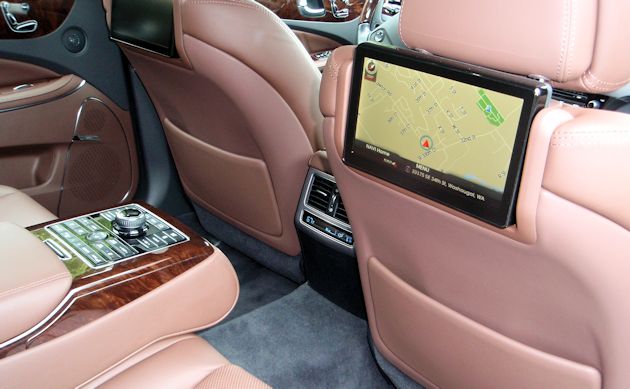 The front seats have all the features we expect to find on high-end luxury sedans including creature comforts like heated and cooled leather seats (front and rear), heated wood and leather steering wheel and power door closures. 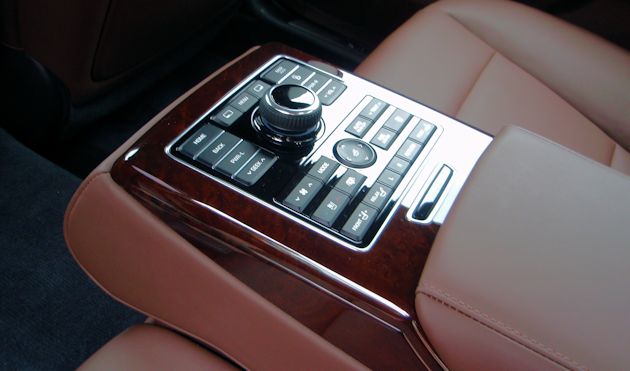 The revised variable Vehicle Dynamics system allows the driver to switch between Normal and Sport modes to change handling and ride characteristics. The transmission also has a Snow mode to aid traction during slippery conditions. The big Equus does have an electro hydraulic variable effort steering system with parking guide assist and a tight 39.6 foot turning radius. The Equus is an enjoyable car to drive and is nicely balanced, but we wouldn?t rank it as a ?driver?s? car. It lacks a little of the handling edge we?ve found in some of the other cars in this class. 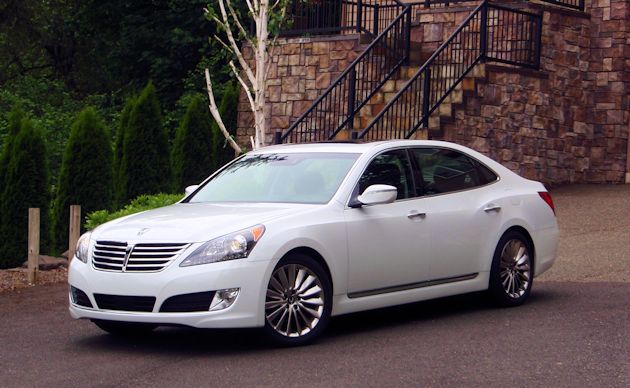 Equus is powered by Hyundai?s 429-hp 5.0-liter Tau DOHC V-8 engine which is capable of a quick 5.4 second 0 to 60 mph acceleration run. The engine is smooth and quiet working in unison with the automatic transmission to drive the rear wheels. Hyundai develops most of their mechanical components in-house and this eight-speed automatic is a good example of the excellent components they use. The SHIFTRONIC transmission can also be manually shifted using the console mounted shifter or the steering wheel-mounted shift paddles. The Equus has an EPA fuel economy rating of 15 mpg city, 23 mpg highway and 18 mpg combines. We actually averaged 18.6 mpg during week of mixed driving. 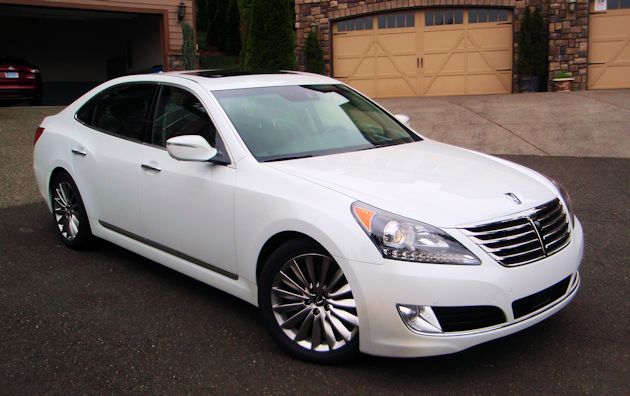 The 2014 Hyundai Equus has been enriched with new technologies to make driving safer and easier. Included on new Equus are a Blind Spot Detection, a sophisticated multi-function Heads-up Display, a multi-view camera system that shows the area around the vehicle, Rear Cross-traffic Alert, Lane Departure Warning with haptic warning through the seatbelt and smart cruise control. The smart cruise control will take the car to a complete stop and then automatically start back up again when the vehicle ahead moves. Equus has also been named a 2013 ?Top Safety Pick? by the Insurance Institute for Highway Safety. 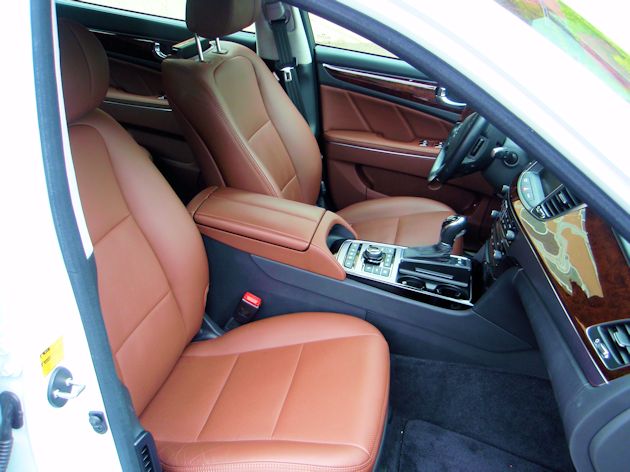 Equus is connected to the Hyundai Blue Link? telematics system which has more than 30 service safety and infotainment features available like Remote Vehicle Start, Stolen Vehicle Recovery, and Remote Access from the Blue Link mobile application, including POI Search and Send-to-car. Blue Link is accessed from the buttons on the rearview mirror, the web and by a smartphone app.

The 2014 Hyundai Equus is a beautiful, comfortable car that tends to spoil you with its luxury appointments and comfort. At the price it?s easily the best luxury car on the road. 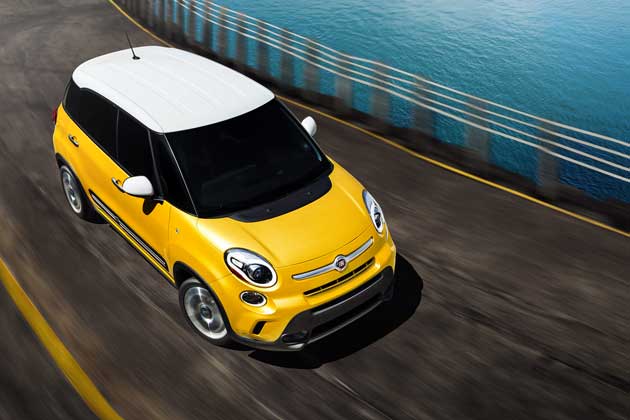 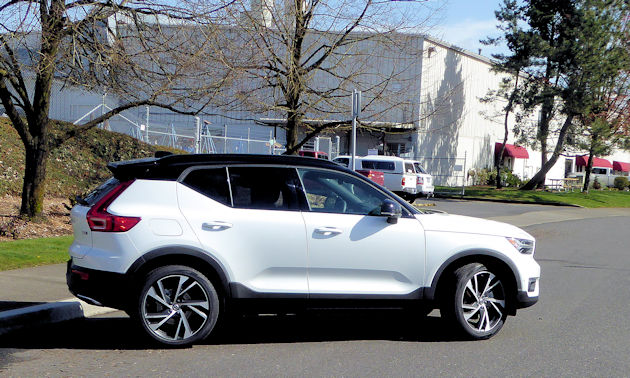