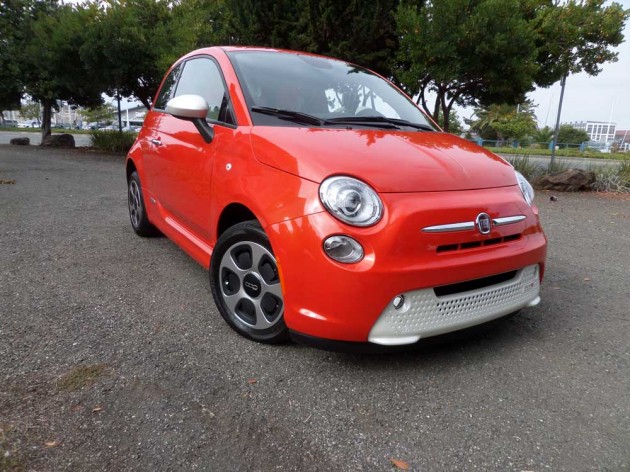 Fiat?s iconic 500 experienced an absence from the North American marketplace for more than 25 years. It?s disappearance possibly due to dependability issues and the premise that FIAT was an acronym for ?Fix It Again Tony?. Whether or not that was a factual perception, Fiat always generated a passionate following on our shores ? especially the Abarth version, which delivered higher levels of performance. 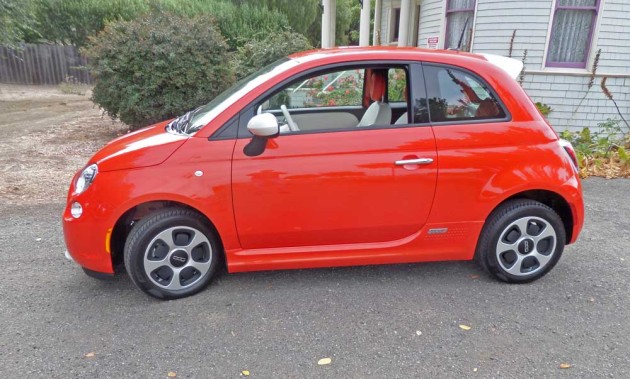 The original Fiat 500 (Cinquecento) made its first appearance on July 4th, 1957 in Turin, Italy with nearly four million produced between 1957 and 1975. The original displayed beautiful Italian styling blended with a timeless functionality, efficient design attributes and innovative technology. With more than a half century since its debut, the Fiat 500 returned in 2012 with the same desirable qualities and appeal for a new generation of drivers. 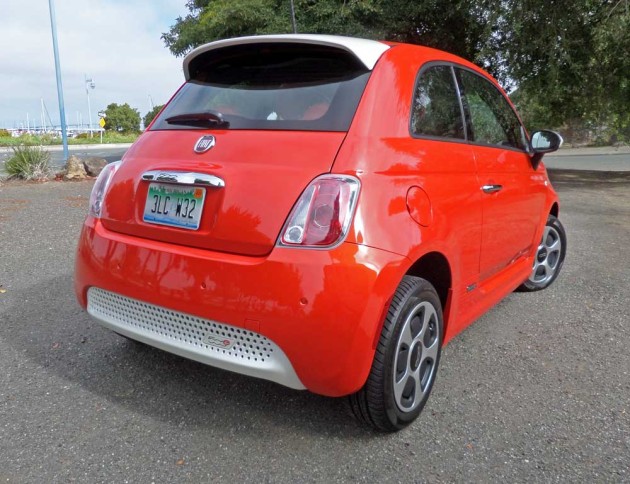 Much in the same fashion as the first Cinquecento, the 2012 Fiat 500 in its return, displayed the brand?s ingenuity in building world-class small cars via simple design, old world craftsmanship and lasting value ? the company?s small car formula worked before, and still works today. The Fiat 500 fulfills a minimalist attitude, while providing state-of-the-art, eco-friendly technology, packaged in an appealing and stylish vehicle.

The Fiat 500e, a battery, electric version of the Fiat 500 is available in coupe form only, and first became available last year. The 2014 Fiat 500e continues, ready to recharge the electric vehicle market segment with its state-of-the-art innovation coupled with Fiat?s Italian style and performance. The 500e offers an impressive 108 highway MPGe rating and a class-leading 87 miles of combined city/highway driving range, with a city driving range that typically measures more than 100 miles.

Fiat 500s capture the original Cinquecento?s iconic allure in a smartly formatted no-nonsense design, artfully and harmoniously blended with technical, cultural and creative aspects. Overhangs are short and the bodyside consists of several superimposed layers, topped by a ?shell-like? roof. Up front, the signature ?whiskers and logo? face incorporates new projector headlamps and lower park lamps. The front fascia tapers outward toward the pronounced wheel arches, displaying a wide, road-holding stance. The upper portion of the fascia features a horizontal cooling duct, while the lower ?honeycomb? style grille integrates stylish fog lamps. Wheel arches are flared and the body-side A-line slopes from the clean clam-shell hood to fender cut. The sides are rounded and both head and taillamps are visible from the side. The 500?s iconic profile is finished off by the roof pillars and shadow-line window molding, forming a gentle continuous arc that also hides the door?s upper edges. In the rear, taillamps flank the rear-opening liftgate, with its rear window spanning the full width, cleanly meeting the ?C? pillars. 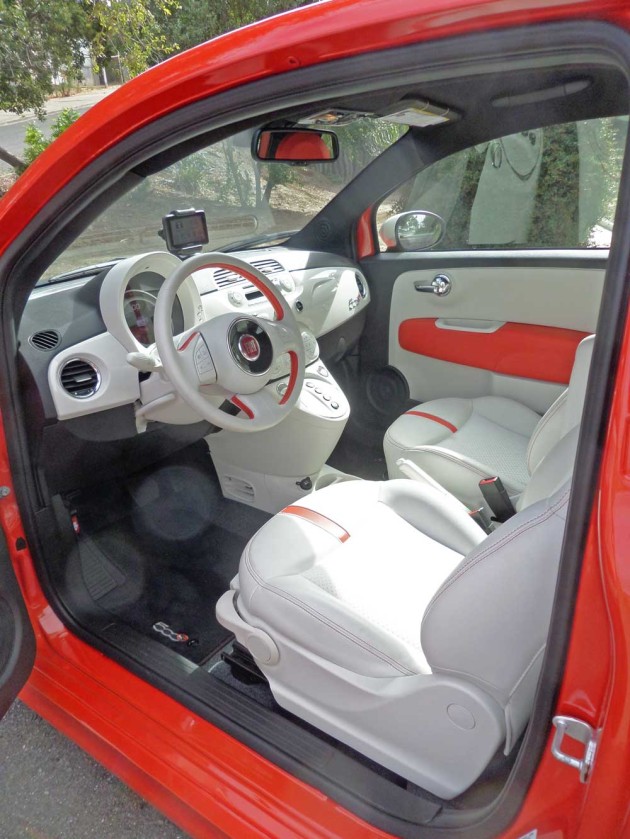 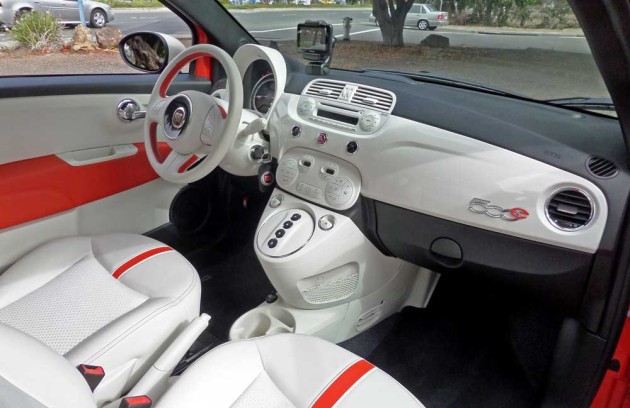 The interior styling and design cues are as simple and appealing as those of the exterior. Controls are logically placed for easy and intuitive use. The gearshift is positioned conveniently in the center stack. Features such as the concentric instrument cluster containing speedometer, tachometer and trip computer were inspired by the original 500. Portable Tom-Tom navigation is available along with BLUE&ME Handsfree Communication. Initially, it was possible for the Fiat 500 to be configured in more than 500 thousand different ways, which has since increased. 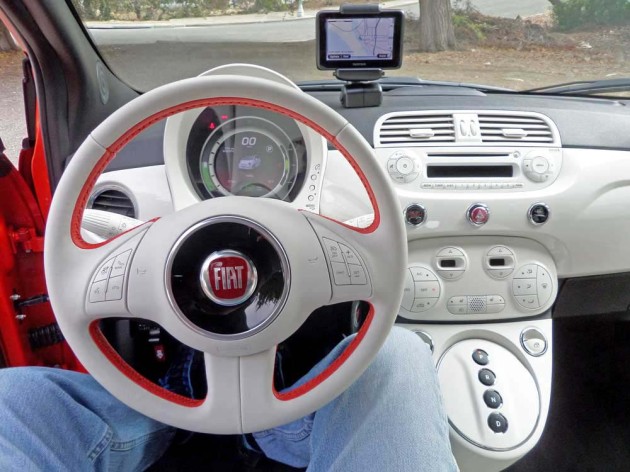 The gasoline powered Fiat 500 is available in three levels of trim: a well equipped Pop model; the appropriately named Sport version; and upscale Lounge model. There are a myriad of exterior finishes and interior treatments to choose from as well across the lineup. Body configurations include a Coupe and a Cabriolet. 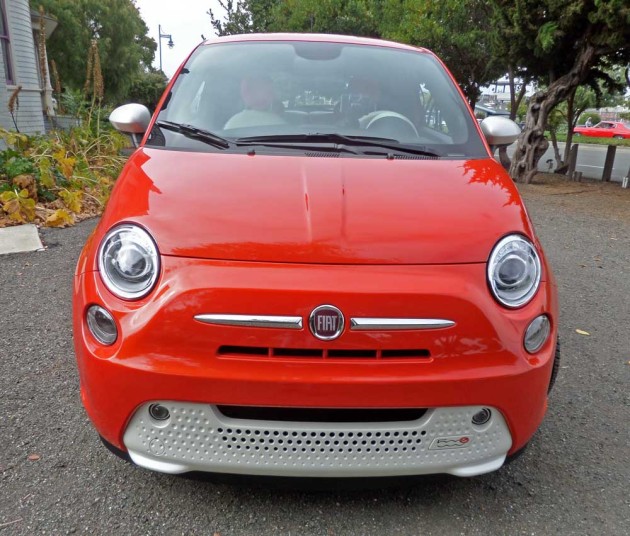 Base model Fiat 500s are powered by a 1.4-liter DOHC, 16-valve MultiAir? inline 4-cylinder engine with sequential multi-port electronic, returnless fuel injection. The innovative engine delivers 101 horsepower at 6,500 rpm along with 98 pound feet of torque at 4,000 rpm. The engine is positioned transversely up front, with either a five-speed manual gearbox, or 6-speed automatic transmission with a manual mode, metering the driving force to the front wheels. 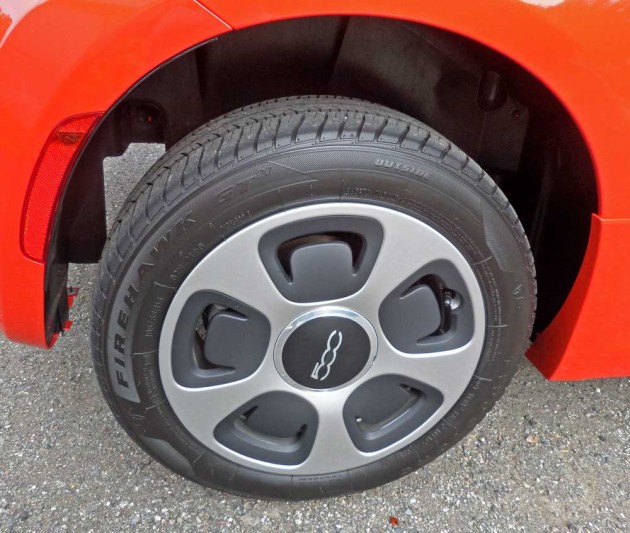 Both Pop and Lounge models ride on 15-inch wheels and tires, while the Sport model rolls on 16-inchers. There?s also a turbocharged version of the 1.4-liter engine that makes 160 horses and 170 pound feet of torque. 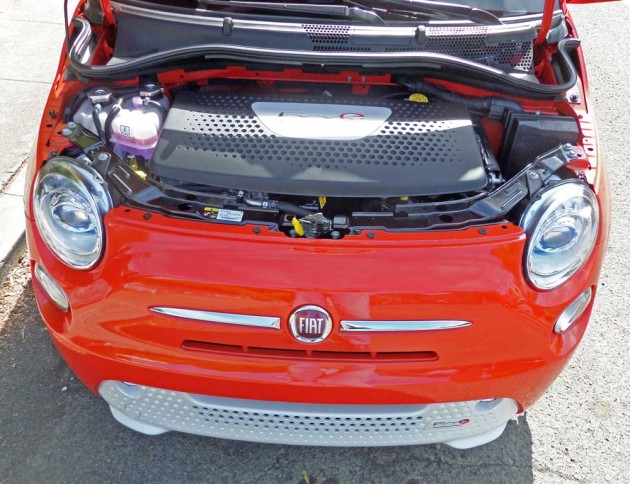 During the national press launch, my driving partner and I tested a 2013 500e with an exterior finish in Nero (Black) metallic and a Nero interior. It was a Sport Package equipped model with Orange mirror caps and body side stripe as well as 15-inch, orange-trimmed alloy wheels and Black trimmed lights. The base price was set at $31,800 while the Sport Package and Destination charge bumped the final tally to $32,995. The 2013 Fiat 500e was initially only available in California, which offers several state incentives and federal tax credits that can effectively bring the cost down to as low as $20,500. after Fiat rebates. This price is roughly $200 less than the current starting price of a comparably equipped Fiat 500 Lounge with a gas engine. Other states are scheduled to follow soon. I recently tested a Fiat 500e with an alluring and attention getting exterior done in Arancio Electrico Perla) Electric Orange Tri-Coat with Pearl Coat metallic trim accents. The interior was executed in a matching theme with Steam (Arancio Electrico – White) leatherette seats trimmed in Orange. The base price was set at $31,800, while the final sticker came to $33,495 after adding the optional exterior metallic paint, the Customer Preferred Package and Destination Charge. 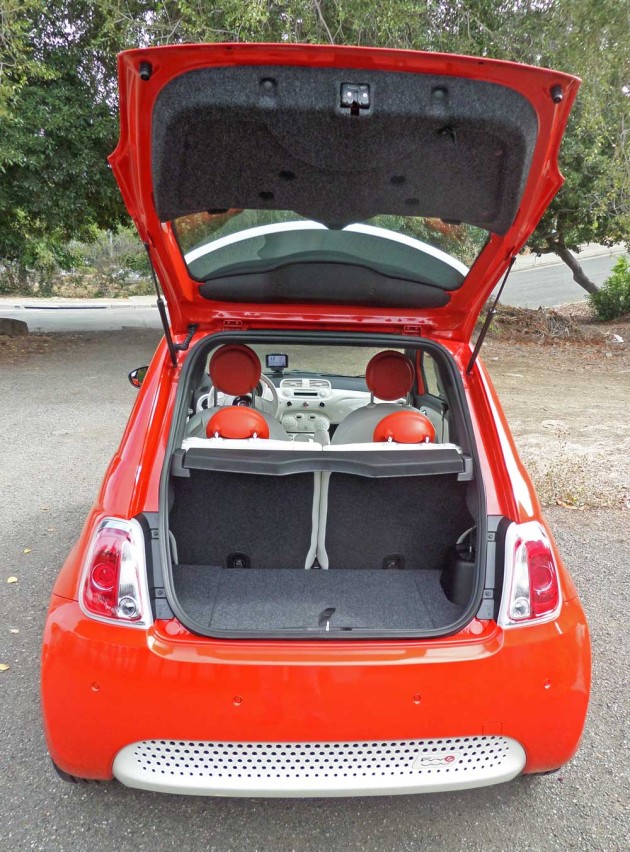 SUMMARY: Driving the 2014 Fiat 500e is just like driving a gasoline-fueled Fiat 500 except that the 500e peels off the line like a rocket, which on one occasion surprised an ultimately embarrassed BMW driver.

Acceleration is genuinely surprising despite its low horsepower rating but the car only weighs 2,980 pounds and the single speed transmission with all of the torque instantly available gets the job done. The 500e is incredibly stable and handles as if on rails, with a pleasantly compliant ride quality. The regenerative braking is quite effective in extending range, while operating almost imperceptibly. Charging, when fully depleted, with the 6.6-kW on-board charging module takes less than 4 hours (Level 2 ? 240-volt) and less than 24 hours (Level 1 ? 120-volt). 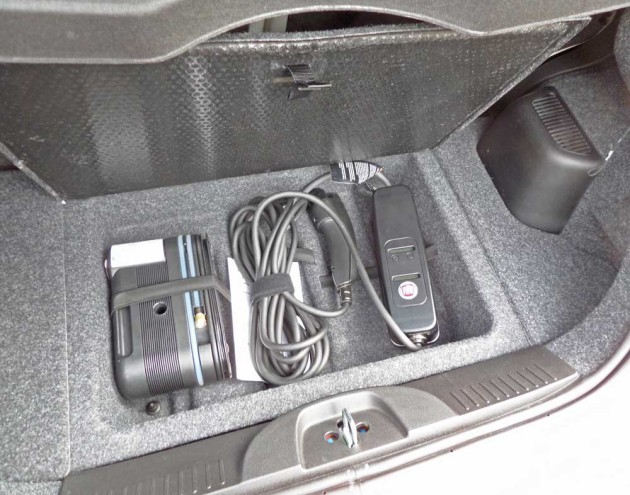 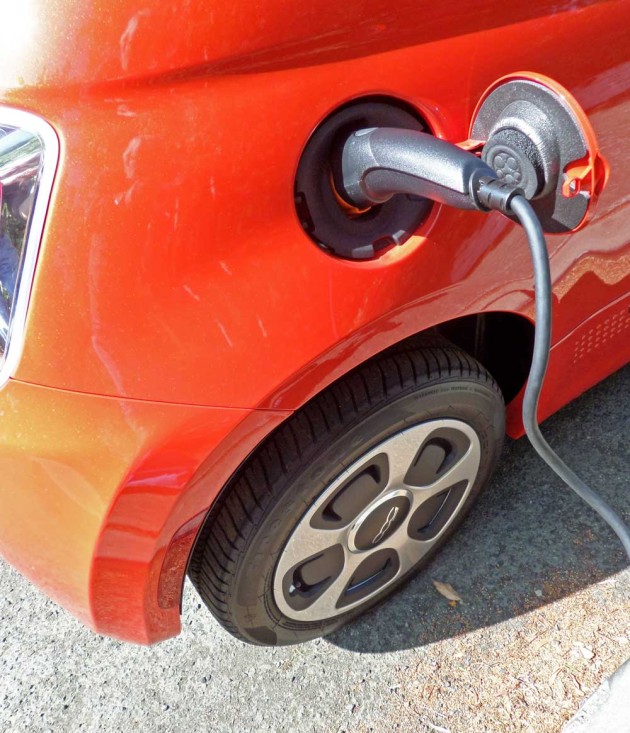 Rear seat room is still best left to small adults or children, particularly with larger front seat occupants. The rear seat backs fold down for added functionality and versatility, with a reasonable amount of room for personal gear even with them up. The Sport model?s seats are specially designed for added support and comfort. 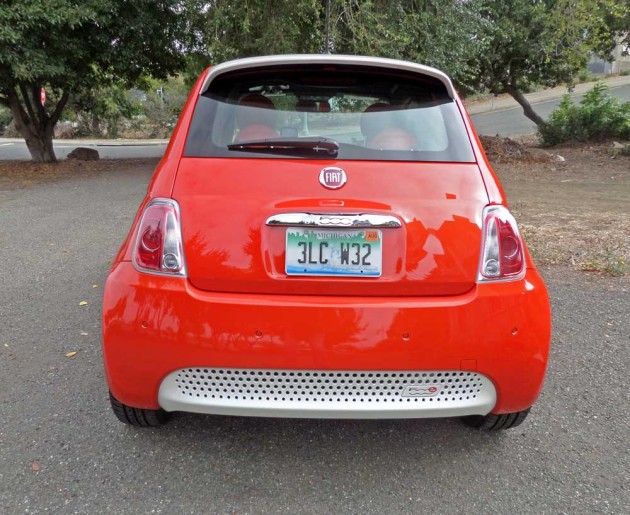 In the final scheme of things, the 2014 Fiat 500e is not only highly efficient, it is great fun, is really cute (normally I avoid this description, but in this case it fits quite well) and attracts lots of attention. It is reasonably priced, especially after incentives, credits and rebates and it is eco-friendly as well. The 2014 Fiat 500e is protected by an 8-year, 100,000-mile warranty. 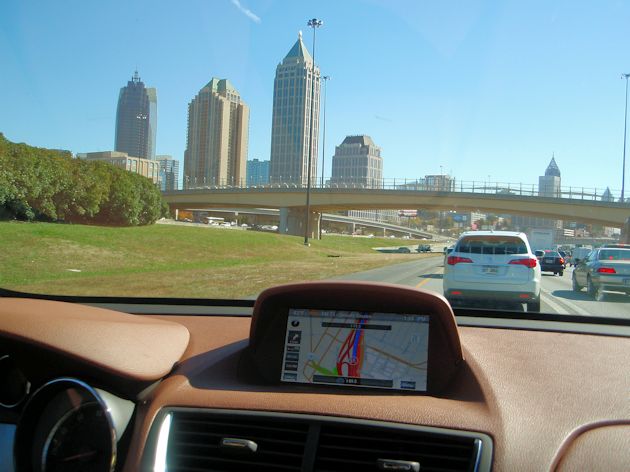